Twenty six years in and still going strong, the annual Territory Challenge has to be the best-kept secret in road racing

My nerves before the first race were out of this world. I had truly forgotten how intense the rush is when sitting on the grid. So many emotions and feelings, and that initial charge to the first corner, I reckon, is what keeps riders in the sport. There’s absolutely nothing like it.

The general consensus of all involved is that the TTC is the best week of motorcycling in Australia and, arguably, the best value. This year’s entry fee was $380 and it buys you seven days on track.

It may be a two-day race meeting consisting of practice qualifying and five races for each of the four participating classes, but it is an entire week of on-track ride days and a swag of off-track activities to keep you entertained. The fun commences on the Monday before the event with five days of ride days and practice before the meeting, proper, kicks off. The four categories that make up the annual TTC are TTC1 for 1000cc Superbikes, the TTC2 for 600cc Supersport machines, TT3Clubman class for the novices and slower riders on a variety of machines and finally the TTC300 for the 300cc production machines.

It was my second appearance at the meeting as a commentator, and the invitation was extended to this year for me to also compete in the TTC3 Clubman Class aboard a Suzuki GSX-R600, generously made available by rapid local rider, Che Diggins.

The BEARS national series makes the trek north every second year which will see the category return for their bi-annual winter sojourn in the Top End in 2019. As a result, numbers were down this year but there were still some 60 riders on track with almost 20 interstaters – including yours truly – keeping the locals honest.

I had an inkling that the terrors from the Top End may have a little fun with the graphics on the fairing I was about to make my well-publicised race return on, but the less said about that the better. It had been quite a few years since I took to a track in anger so there was some rekindling to be done. And while the track may not look much from the outside, it doesn’t take long to become utterly enamoured with the 2.8km Hidden Valley circuit – what a superb ribbon of bitumen.

Initially, there were a few gremlins lurking about the bike as it had been sitting in a shed for a few years. First up, it was overheating, so we flushed the radiator a handful of times earlier in the week which cured the problem. Then, in my first session out, I had a rear-wheel issue that caused the chain to come off and bend the clutch pin – talk about a heart starter! 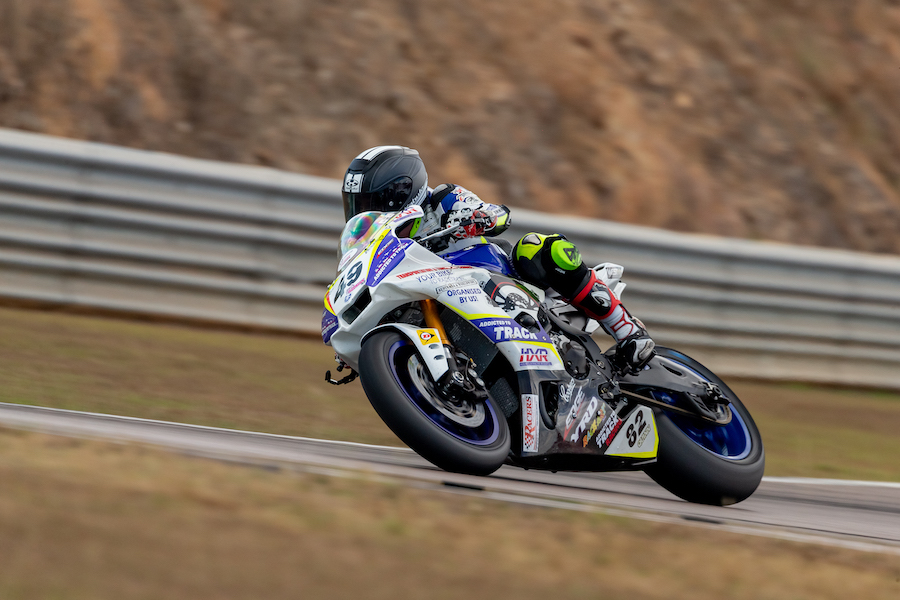 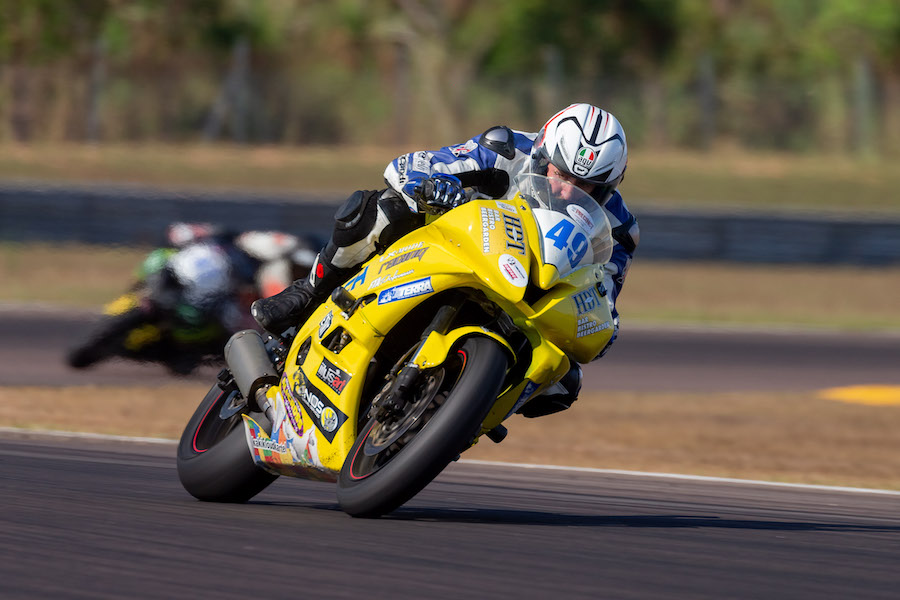 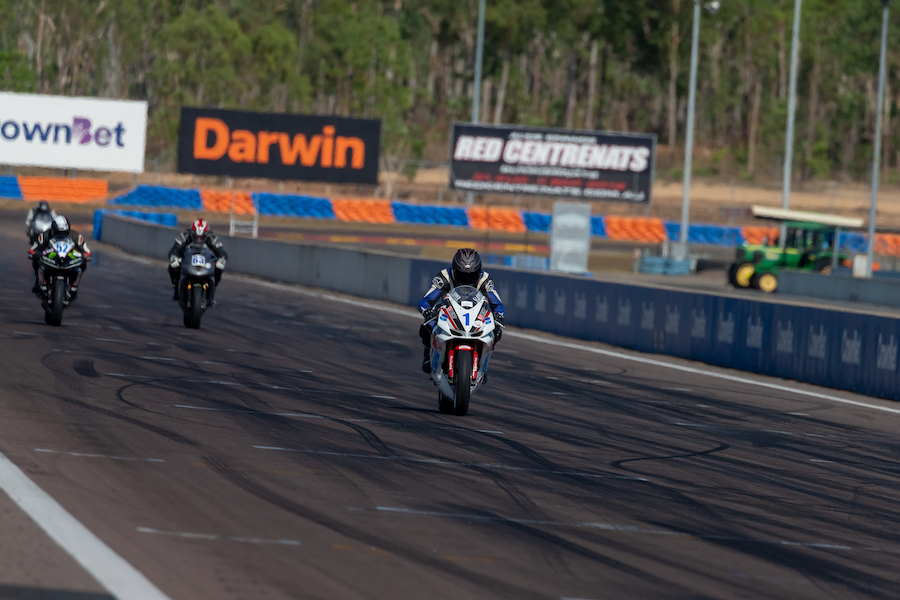 Qualifying was were I had to pull it all together. It wasn’t too bad and, despite not getting a clear run, I still managed to finish mid pack in 12th from 24 riders – not bad for a rusty old bloke.

In the two races on Saturday afternoon, I bettered my qualifying result by one spot and was consistent with two 11th-place finishes. Re-bitten by the bug, I was desperate to find some improvement on Sunday and I had three races to do it in. I hit a snag early during warm-up when the bike starting carrying on with mis-fires.

Assuming it was an obvious fuelling issue, we gave the fuel pump and filter a bit of love during and, while it meant I missed the first race, I still had the final two to see if I could better my results.

Everything seemed on course to have me lined up as a bundle of nerves on the grid of the fourth race but the racing gods had other ideas. Warming up the bike in the pit ahead of the sighting lap, the misfire not only returned – but was worse! I had no option but to park the bike. I was left enormously disappointed, but so hungry for more.

Whether a rider or enthusiast keep the TTC in mind for a mid winter break. It is an absolutely magnificent time and all those involved make you feel very welcome. If you fancy seeing a beautiful part of the world and have always wanted to try your hand at racing, there’s worse things you could do than the Territory Challenge. 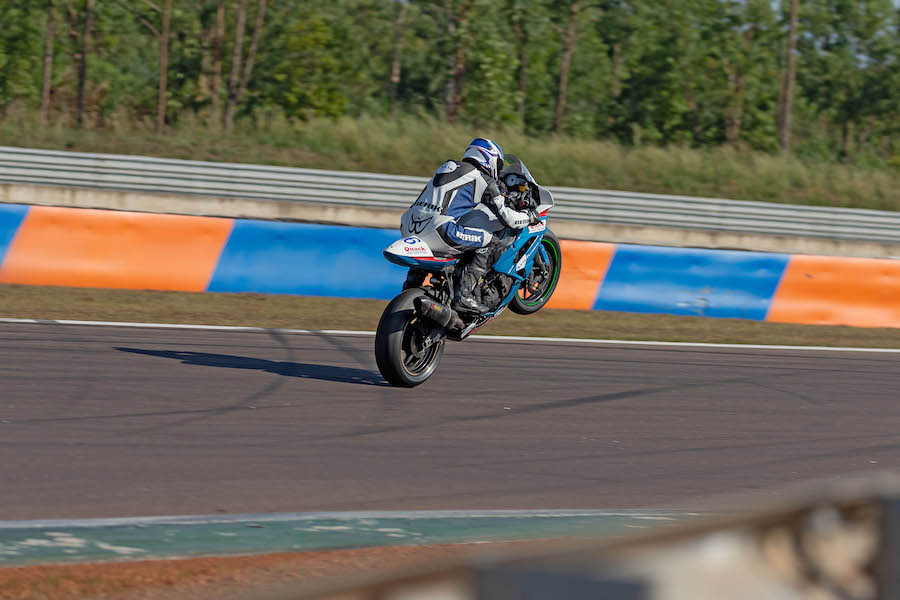 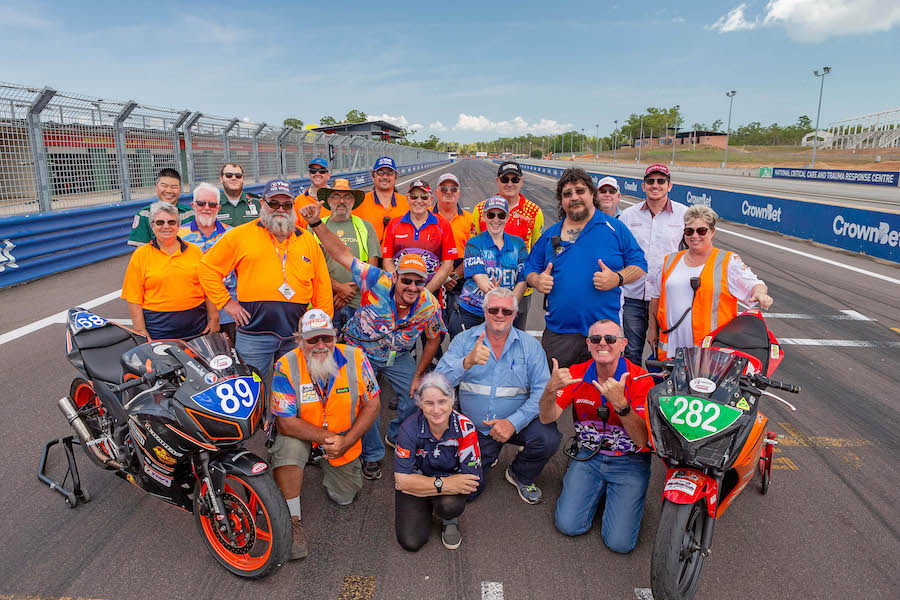 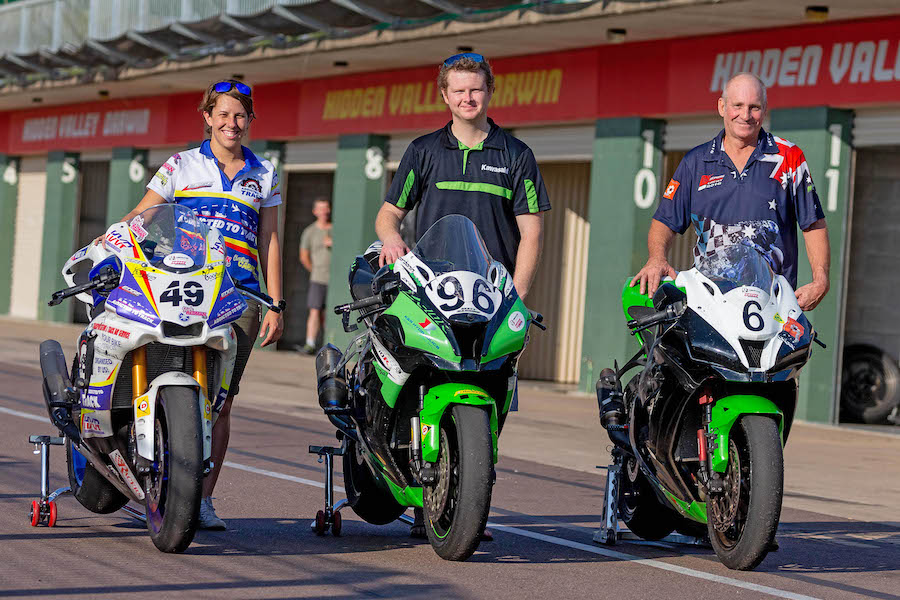 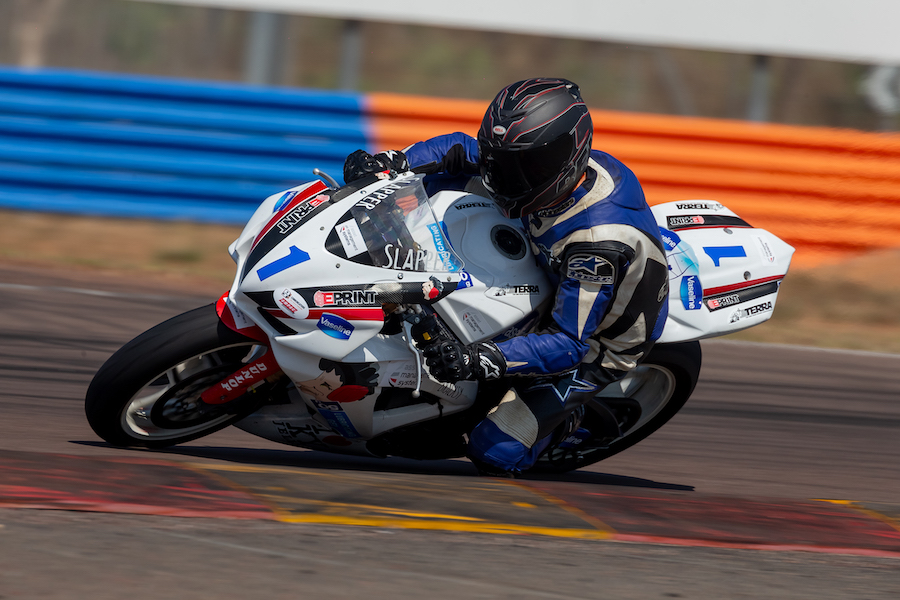 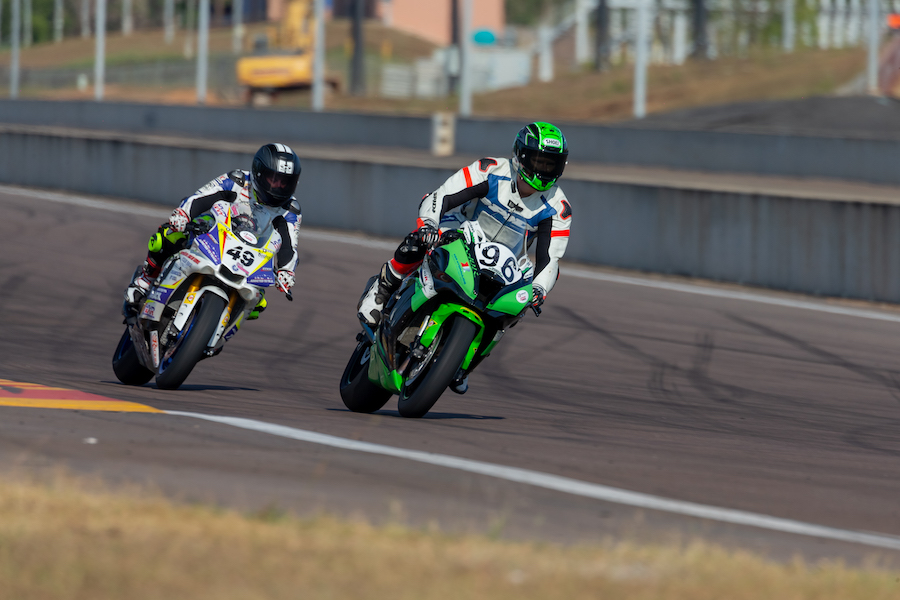 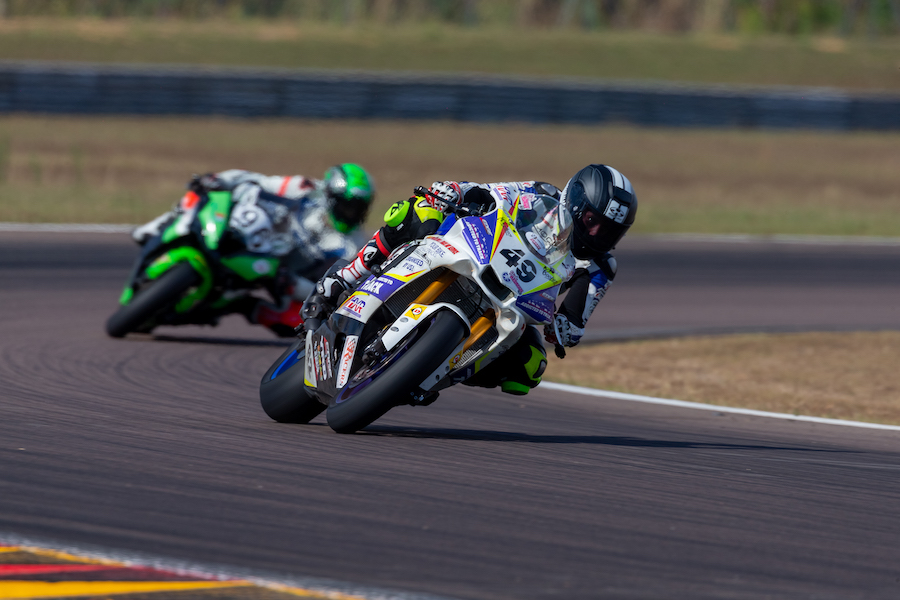 This is how the other 59 people who attended the event

In the TTC1 Superbike category, Matthew Harding (Kawasaki ZX-10R) from the NSW Hunter Valley successfully defended his crown taking four wins and a second place from Queenslander Stephanie Redman (Addicted To Track R1) who finished second overall, with the evergreen Karl Schmidt (Kawasaki ZX-10R) using his 30 years of racing experience to claim the final spot on the overall podium.

Harding has not been racing much of late due to personal commitments, but he still has a plenty of pace, which makes Redman’s performance extra impressive as it was her first time racing a 1000cc machine. In fact, her efforts were all the more applaudable by the fact that she broke her right foot the week before at a race meeting in Sydney after a big off. She might have been limping around the pits in a moon boot, but it had very little bearing on her on-track performance.

In all heats, Redman rocketed off the line to lead every leg with Harding and Jay Breeuwer-Wrennall (GSX-R1000) in hot pursuit. Breeuwer-Wrennall had a pair of third-place finishes in the opening races but had a huge get off in leg three which, unfortunately, ended his weekend.

After four heats it looked as though Harding was on form to claim the same clean sweep as he did last year, but Redman had other ideas. In the final 15-lap feature, she set up a handy lead with Harding managing to close her down. At third-race distance he made a mistake, missed a gear, ran off the track and stalled, robbing onlookers of a late-race showdown between the weekend’s protagonists. He restarted but it was all too late as Redman stretched the lead to 25 seconds to grab her piece of history of being the first female competitor to win a Superbike race at the TTC and, quite possibly, the first female to win a major Superbike race in Australia.

In the TTC300 category there were some excellent battles for the lead between the two Agostin Brother and Lachlan O’Brien, the trio embroiled in some extremely entertaining duels. Younger brother Cameron took the class from O’Brien with older Ago, Kristen in third.