I feel extra qualified to test the new KTM 790 Duke, simply because the Duke name and I go way back. I attended the world launch of the very first KTM Super Duke for AMCN in 2003, I owned a single-cylinder Series One KTM 620 Duke for a couple of years (a bike I should never have sold), and my current daily ride is a 1290 Super Duke R Special Edition.

What all three have in common, even across the single and V-twin engines, is a singularly mental attitude. They dare you to get on and ride like most of the KTM staff do – with passion, purpose and a sense of fun, albeit tinged with maniacal hilarity.

Almost anything with a KTM badge is built with a similar DNA, and at the first suggestion of a 790 Duke, I was hooked. Until I realised it was to be powered by one of the most potentially boring powerplants imaginable, a parallel twin.

It’s all about crank offsets with these engines. A standard-offset parallel twin is reliable and all that, but also a dead-set snore in KTM terms. That engine configuration has starred in so many bland built-to-a-price machines that I just couldn’t feel excited about such an engine powering a KTM Duke, a bike known for barely tamed fuel-burners trying to burst out of tightly built chassis.

I was disheartened. It simply couldn’t work; KTM had sold out, finally. But perhaps the fact the 620 Duke I owned contained a raucous single-cylinder bursting out of its skin every time I kicked it into life should have given me more faith… KTM doesn’t know how to build bland engines.

Pushing the start button for the first time, I was rewarded with the sound of something that wants to rip out of the chassis and explode between your legs with delight. 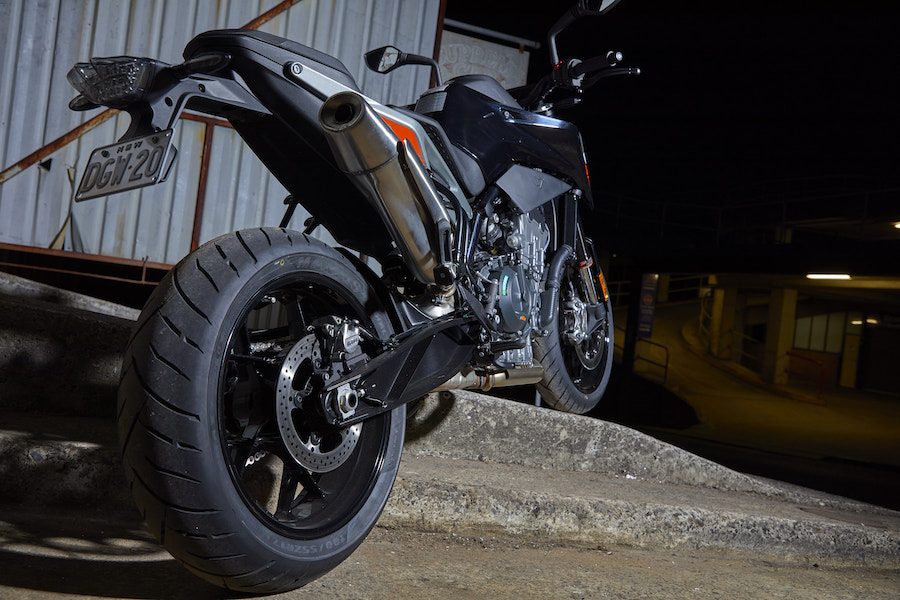 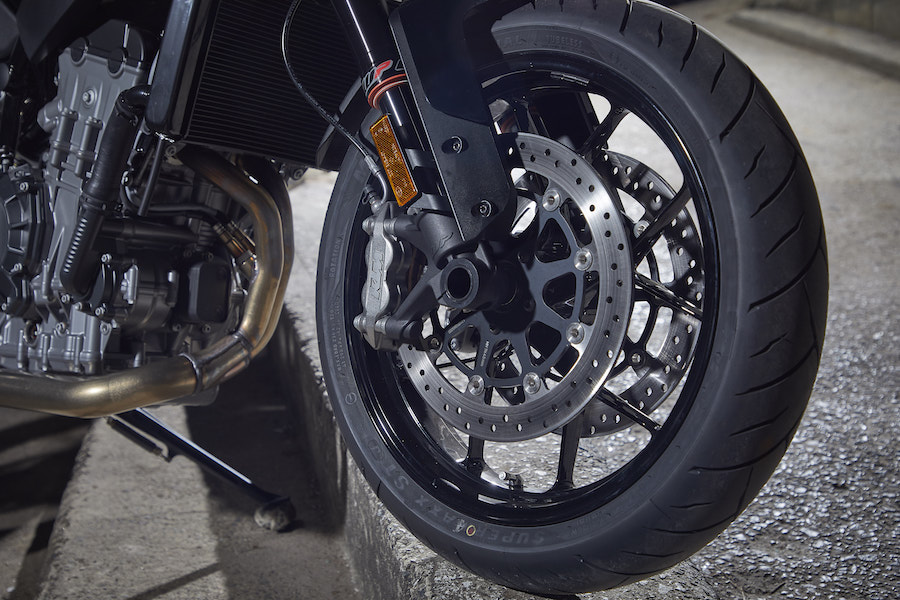 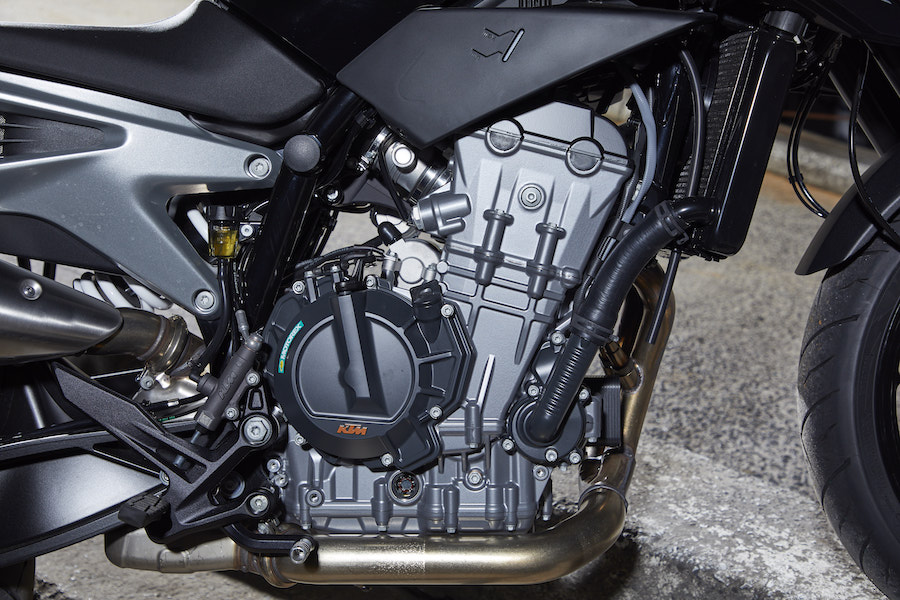 The LC8c idles like a snorty dragon. It’s no mistake it feels like that, of course. KTM spent many man-hours finding ways to make the budget and size-conscious powerplant fit the KTM mould after trying and failing to create a V-twin small and cheap enough to work in a mid-size machine aimed to compete with three-cylinder machines such as the Yamaha MT-09 and Triumph Street Triple.

A 435-degree firing interval combines with 75-degree offset crank-pins – unlike how other manufacturers are trying to spice up their parallel twins – to emulate KTM’s V-Twin character.

Parallel twins are easier to package into a motorcycle than almost anything else and, balancing challenges aside, if you can make them feel and sound like a V-Twin, why wouldn’t you?

KTM has done a great job here. This bike pokes you in the fun bone like other Orange bikes, and the engine keeps the bike small and compact. I reckon KTM has done such a good job with the motor that it should have kept the Super Duke moniker for this ‘small’ bike. It deserves it.

In doing so, they also kept clean an area that only recent KTMs have managed to iron out – the bottom-end. A mid-sized bike needs to fuel sweetly from deep in the rev basement and into the mid-range to be properly useable, and this parallel twin does that. The fuelling and fly-by-wire throttle response is so sweet off the bottom it makes the useable rev range really broad and the bike therefore feels beyond its cubes. It’s 900-like. The shenanigans I got up to for the photoshoot happened only 30 minutes after I got on the bike – it’s so easy to ride and so intuitive that I didn’t need any more than that  to feel in control of it. That sweet bottom-end is part of it, but so is the compact chassis and the fact everything you touch feels so responsive.

Brakes, throttle, gear lever, seat – they all add up to a sum of parts that seem inter-connected, rather than a bit too hard here, slightly loose there, not quite right everywhere. The development team deserves a pat on the back because this is a bike that makes you feel good when you ride it, mostly because it wants to please you, like all bikes in the Duke/Super Duke range. And it does!

Simply moving off, for instance, can be an adrenaline spike if you want it to be, or a more casual exit if you wish. You won’t be tapping the latter option much, I would suggest…

It is ‘only’ a 790, but dialling in one-third of the tacho’s revs is enough to obnoxiously growl away from a standing start. The bike feels like it should wheelie really easily, but it actually doesn’t. The long swingarm and weight distribution keeps it driving forward, not up, in the higher gears – though it is happy to paw skywards in first if the traction control is switched off. A bit of clutch in second and third and it will oblige, of course; it has KTM DNA after all. It’s just that it doesn’t power-wheelie as easily as I expected it to.

The best bit, aside from punching away from cars at a satisfactory pace and sounding most unlike a parallel twin in the process, is snapping second. Everything goes all WSBK as the switchable quickshifter cuts engine revs, allowing up and down cog-swapping in style.

I soon learned exactly what throttle opening it liked to sound best, and did that as often as possible. It does it in all gears, but requires a lot of throttle, so best you pick your place for that.

Less than three-quarter throttle and it simply changes gear, without the passionate burst of ear music. So I didn’t do that much!

Not long after a hasty and look-at-me take-off, you’re looking for corners. The Duke/Super Duke range, for all the animal engine hardware, are actually softish, compliant road-goers, and the 790 is also in this vein. 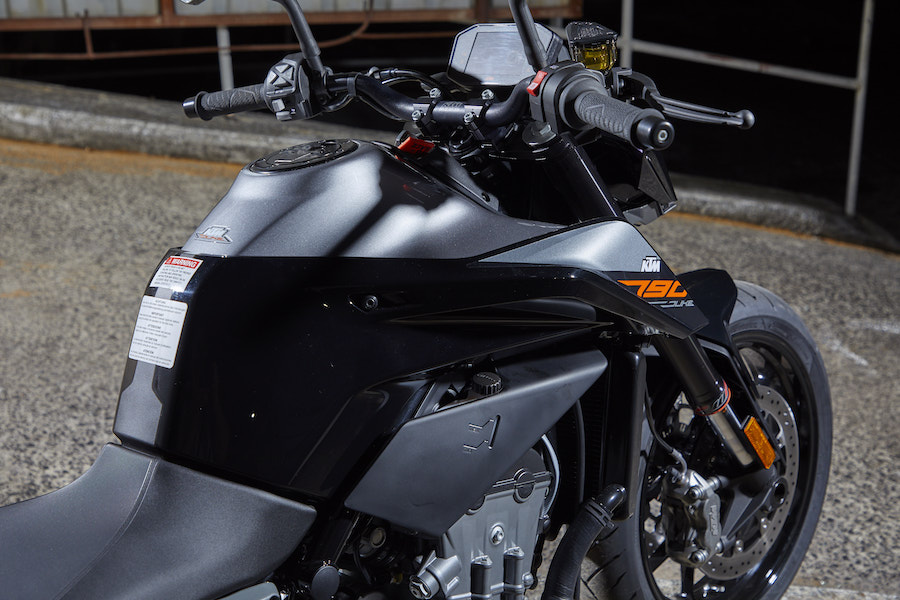 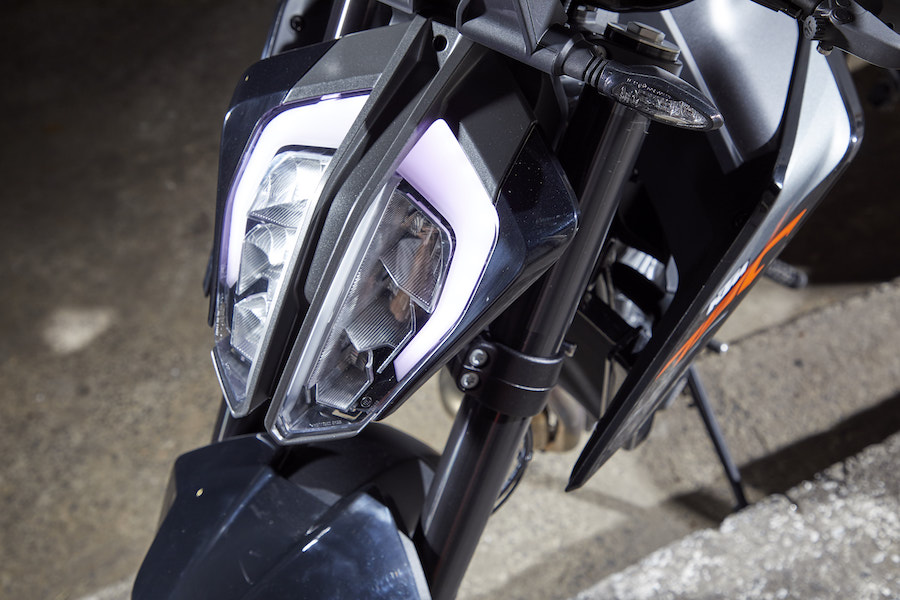 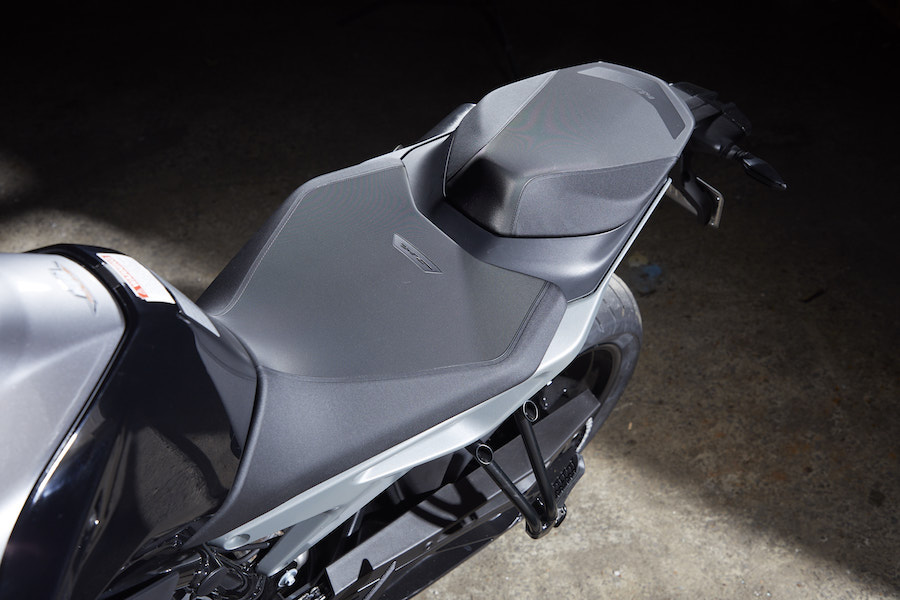 The shock hasn’t always been good on KTMs, simply because they bolt the WP shock directly to the long swingarm (no linkage), but on this bike the flatish mounted item does a great job of keeping the bike straight – the lack of wallow on average roads is unusual for a wide-’barred nakedbike – and potholes I gritted my teeth for simply flowed by, without the seat hitting me hard in the bum.

For the price of this bike, $15,495 (plus on-road costs), this suspension is amazing. Well sorted, compliant, able to deal with a range of conditions, decent feedback – it’s quality. It even lands half-decent jumps quite well as it turns out.

The riding position is a winner. The seat is wide and looks out of place, especially from behind because the bike is so small. But it is well-shaped and doesn’t feel like it’s out of place, with solid comfort levels.

At 178cm, my feet are almost flat on the ground if I have both out – which I rarely do – and the ’bars sit right where they feel comfortable for me. Mid-sized nakedbikes are about fun, but they need to be practical as well, and this bike is something you can sit on all day. With a monster smile on your face.

Then there’s its looks. To my eye, the mostly black bike appears – and I’m sorry to have to say this about a KTM – bland. The orange version is instantly a KTM, but the black version could be any old thing at a glance. For me, a bike as outrageous as something with the Duke badge on it needs to look as horn as it goes, and the 790 simply doesn’t. You can’t see a bike when you’re riding it, apart from vain glances in shop windows, but this bike stirs something in you physically, and it should do that visually as well. With the orange version, trick exhaust, paint those wheels, add different bars and grips and a seat cover, and you’d be getting closer, I reckon.

There is a noticeable lack of branded parts on this bike, so if you care about that kind of thing, you will be disappointed. The front brake calipers are KTM-branded, the KTM-owned WP suspension is a staple, and the wheels are standard items. This may lead people to believe they are looking at something sub-standard. You are not. This bike is a weapon. I don’t care what brands are on a bike, as long as they work. And that they do.

The 790 Duke rides beautifully, has all the fart and angst you expect from a KTM, handles astoundingly well for a bike in this class and fit and finish is good.

I’d like it to look as lairy as it makes me ride, but that’s what KTM Powerparts can do. It isn’t as cheap as the MT-09, but it offers more in the riding experience. I have just ridden a MT-09SP and, while it has some big brand-name parts on it, the KTM has more character and is a worthy competitor.

KTM owners like myself will get on with this bike immediately and will love it. I do. And I hope new buyers will be swayed by it. It’s a great introduction to how KTM builds roadbikes and is animal-level fun to ride. The engine and chassis are inspiring. If you ever need motivation to ride, buy this puppy. It won’t be idle in the garage.