Since my introduction to motorcycles three years ago I have been consumed by the world of road racing – until now. The AMCN three-day adventure has awakened me to the joys of another style of riding.

On the Royal Enfield Himalayan I got a taste of off- and on-road adventure in one. I now realise adventure riding is not so much about the destination, but the excitement of the journey and the friends you meet along the way.

As it was my first adventure ride with AMCN, one of my biggest fears was dropping the bike and damaging it, or myself. To my relief that didn’t happen. At just 179.4kg fully fuelled, the Himalayan is light, and it also has a low seat, so people of my height and strength can confidently ride it. My first impression of the bike was ‘simple’. With its narrow front and minimal fairings it looks like it was designed for a practical purpose: to get a rider from A to B without complications. The basic suspension and upright and intuitive ergonomics make it comfortable both on and off road.

One of the interesting features of the bike for someone who has come to motorcycling pretty recently was the choke and fuel tap – the Himalayan needed to be warmed up before riding. Although it’s not ideal when your mates are keen to get off the startline, it does give the bike character. Another quirky feature was the compass on the dash, which could have been very useful, if only I had known how to use it.

This is a LAMS bike, so the power was not intimidating. The front brakes were different from what I was used to (on my racebike) and required more effort on the road, the rear brakes, however, worked way better, were effective off road and were very useful on wet terrain.

I felt the tyres were lacking a grip – and I don’t mean compared to race slicks! Off the road they felt great on the dry surfaces. But on the muddy tracks they understandably lacked traction. Thanks to the low seat, though, I managed to catch the slides.

The Himalayan comes with a centrestand, which is practical if you’re like me and plan to change tyres or do mechanical work at some point. The sidestand was a challenge, however. Due to its length you really needed to make sure the bike was level to prevent it falling over. Not a deal-breaker but something to consider when stopping. If I was planning on doing another adventure on the Himalayan I would put in better front brake pads, change the tyres and shorten the sidestand – that’s it! I’d also try to get my sense of direction up to scratch so I could use the compass!

Although it’s a humble little bike, in three days it changed the way I look at riding. I’ll definitely be planning more two-wheeled adventures during the racing off season – maybe even on a Himalayan. The low seat height and the light weight of the Royal Enfield Himalayan. This allowed me to save multiple falls when having fun off road in the rocky and slippery terrain. The predictable output of the engine also meant I was not intimidated going off road with my limited experience.

The shortcomings, for what we asked of it, was the front brake feel (to be fair it only had 500km on the clock when I picked it up), the long sidestand and the tyres. And although it wasn’t the bike’s fault, I wouldn’t have minded a few extra ponies when the going got gruff on the road.

All of the negative points I’ve mentioned are an easy  fix, so I’d get those sorted before I left to increase my confidence and, ultimately, the fun times! And with the price of the Himalayan so low, I’d end up with a still-inexpensive yet very capable bike. 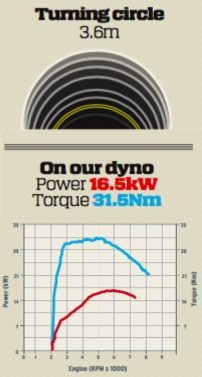