Motors matter, on so many levels. And no manufacturer seems more attuned to this fact in their recent product planning than Yamaha. The new-school Masters of Torque range has been marching out of the blue corner to battle for street supremacy in a steady stream of brilliant and near-peerless models since the death of the original master of torque sport, the MT-01 in 2012. Its long-awaited replacement, the MT-10, was the most anticipated release in Yamaha’s confident and ambitious revitalisation of its streetbike line-up, and is even more bold and unapologetic than its big-bore predecessor, or its current smaller two- and three-cylinder siblings. The motor that matters most is the growling, grip-seeking marvel that is Yamaha’s 1000cc cross-plane in-line four. This particular example was even better than the MT-10 we had for the recent supernaked group test. Initial throttle response was smoother and more progressive on this bike. Yamaha say there has been no revised tune, so it may be down to the other bike’s ECU not correctly adapting on its initial start-up – a problem which can affect any modern EFI equipped bike, and which is easily rectified.

The MT-10 is unashamedly a streetbike, not a naked sportsbike. It’s a street fighter, in old-school nakedbike parlance. It boasts a bolt upright stance, stands much taller than any denuded racer, and has a chassis set up for road compliance rather than track combat. But it does do sports riding extremely well. And commuting, and touring, and stunting, and trackdays. The appeal of the MT-10’s unique package of features lies its versatility.  There is, however, one small caveat in that statement – it doesn’t do two-up too well. The pillion seat is cramped and devoid of adequate hand holds. Curious, on a bike with such spacious ergos for the rider. What’s more curious is the mix of electronics, or more specifically, what’s missing. Cruise control, traction control, quickshifter (optional), ABS, and alternative throttle maps all serve their purpose competently. But no anti-wheelie, which seems like a glorious oversight on bike with such massive mono potential. Not that this excuse is going to stand up in court to defend your stand up wheelie down Main St.

Although near the top of most of our riders’ favourites, there were some niggles which robbed the MT-10 of points. Surprisingly, it proved to be a thirsty thing on the road, and the seat wobbled excessively. So as good as it is, there’s still room for refinement in the years to come.

No matter what you think of the MT-10’s styling, performance or finishing quality, there is no denying its killer value. In a motorcycle market which often seems a touch over-priced, Yamaha keeps piling pressure on its rivals with bargains that buck the trend, and bikes that appeal on their own considerable merits. The MT-10 is a case in point. 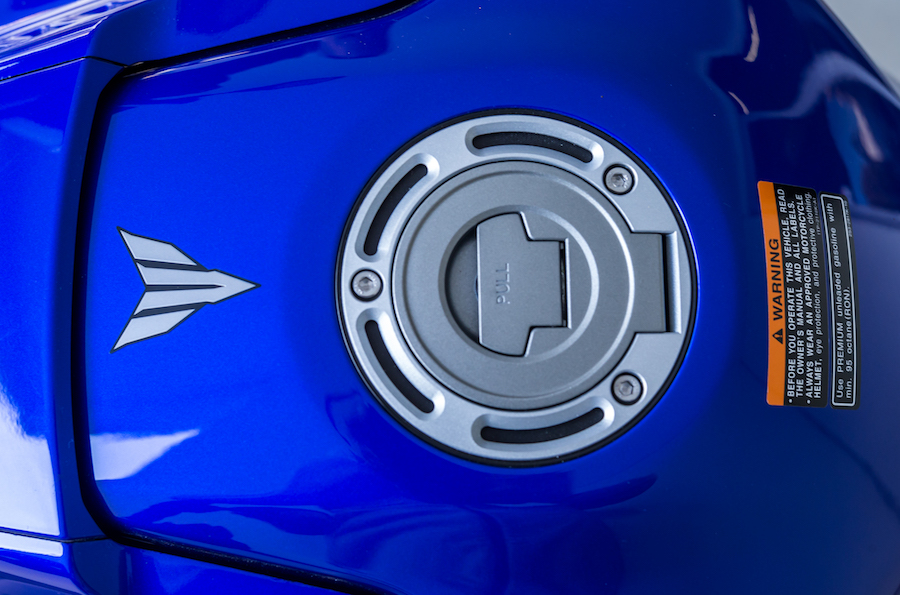 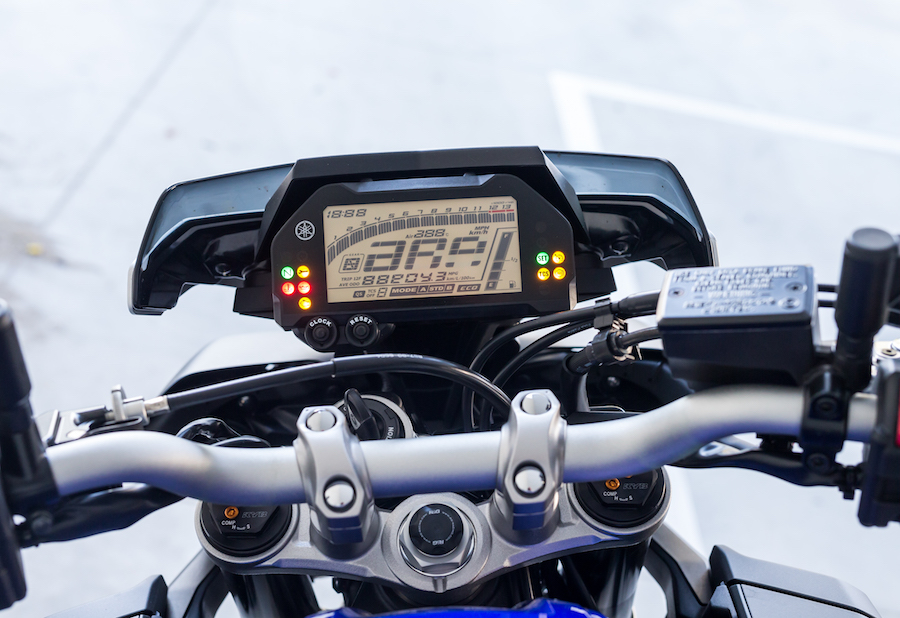 Despite questionable fuel economy, a couple of cheapish looking bits and a face only a blind mother could love, for $17,999 (+ ORC) the MT-10 is a cracker of a bike. Helping seal the deal is a sweet-handling chassis that instils confidence in normal riders like me, and that’s what a big-bore nakedbike is all about. Yamaha has taken its hard-ass R1 and refined it into a usable road package that delivers a massive amount of bang for your buck – in other words, it hits the mark on its design brief. The electronics aren’t over-complicated or overkill. It’s well mannered around town, but has no trouble cracking on through the twisting bits. What it lacks in braking and suspension bling, it more than makes up for with a well-sorted package and value for money. Power delivery is stronger in the bottom gears in A and B mode but most of the time this felt like a poor trade-off for the snatchier response. The slightly more upright riding position than on the Tuono combined with softer standard suspension also makes the MT-10 a slightly more practical day-to-day ride, though this is slightly offset by the obscene fuel consumption figures we calculated. What I find funny about the poor MT-10 is everybody has a crack at it straight away for being ugly, but I think its sharp edges and transformer-like appearance is unique, and it has grown on me. It has an instantly comfortable and practical feel to it, a nice upright riding positon and balance of evenly distributed weight. When you turn the key and hit the starter it comers alive with a throaty roar, and a blip of the throttle creates such a rumble that you know you are going to be in for a spirited ride.

This year we selected eight wonders: the Kawasaki ZX-10R, the Honda Africa Twin, the Triumph Thruxton R, the Aprilia 1100 Tuono Factory, the MV Agusta Brutale 800, the Ducati XDiavel S, the Yamaha MT-10 and the KTM Super Duke GT. They come from across the spectrum of bike genres: adventurers, tourers, café racers, nakedbikes and out-and-out track weapons. 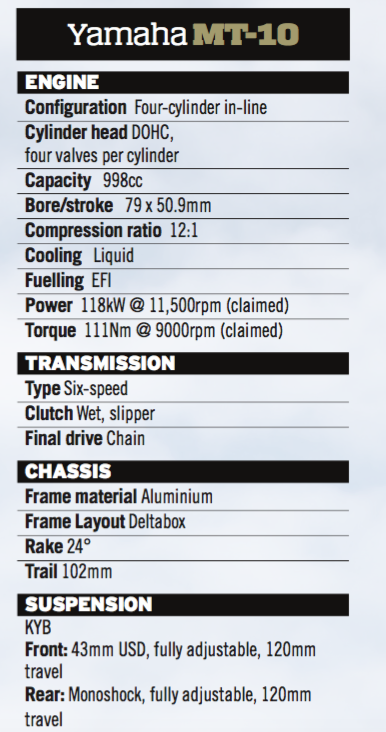