With the trunk packed and a full standard-issue jerry can, we head west on Ural’s adventure-spec sidecar outfit

If you have sat around a campfire in the small hours after midnight you’ll know the conversation is different. My campfire convos often often drift to sidecars and the weirdness that invariably surrounds them – bags of cement in the chair, the joys of right handers and the fear of lefts, the dark art of geometry and the adventurous spirit that is required to climb aboard the bastard child of motorcycling.

Many eschew the virtues of handcrafting their own chair and leading-link forks and head for the sidecar shop where you’ll only find one bike, the Russian-built Ural, the world’s only remaining manufacturer of a complete outfit. The history of the Ural is long and controversial, just ask any BMW aficionado and the banter will start with Stalin in 1941 nicking the BMW R71 design by reverse engineering four bikes smuggled from Sweden, followed by mass production to fight the German blitzkriegs of WW2.

But unlike BMW, Ural has stayed close to the original design mainly due to the U.S.S.R and communism constricting innovation, through people’s inability to pay for it, during the cold war. Luckily for us a wave of nostalgia has swept the world and, to capitalise, the Ural factory just needed to increase its quality control and buy in a few choice parts such as Brembo brakes on all wheels, Nippon Denso alternator, Paoli shocks, Domino controls, a steering damper and, of course, electronic fuel injection. Since 2002, Ural’s new US-based Russian owner has been steadily modernising the machines. Thankfully the 2019 models still look like a 1941 M72 model, just with specced-up parts. You will still find the quirks from WW2, such as a document compartment in the petrol tank, an accessory machine-gun mount – cos who doesn’t need one of those – and military colour schemes. But the focus is on comfort, reliability and a bike that you can live with day to day.

The build quality of the gun metal grey Ranger was superb – I couldn’t fault it. It looked and felt rugged and every part looked tough. Small little features such as the new handlebar-mounted hand brake and the added storage under the seat were nice. Even the owners manual is impressive, clearly designed by a smart marketing team, Ural Australia supplies a Customer Kit to help with the obligatory UDF (Ural Delay Factor) where you get stopped and asked countless questions. 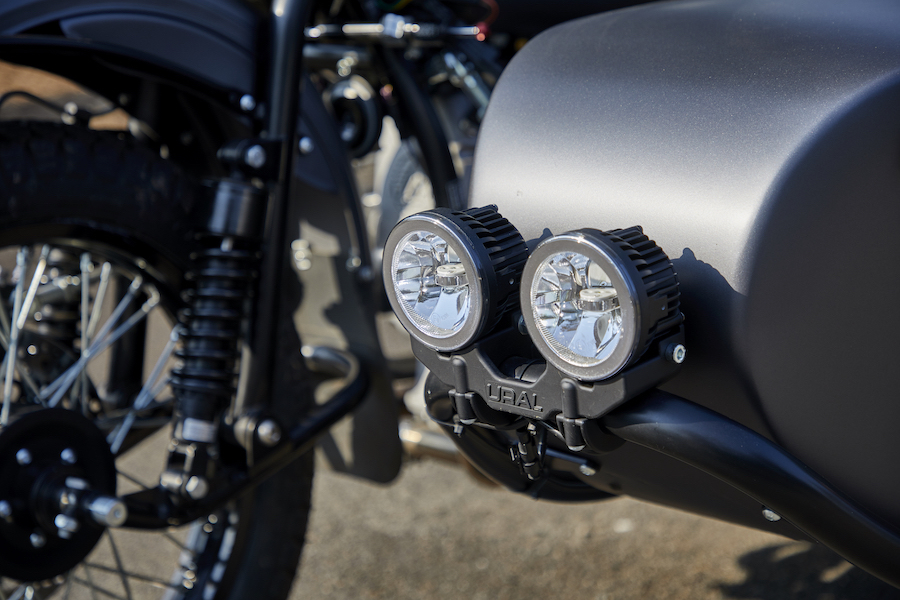 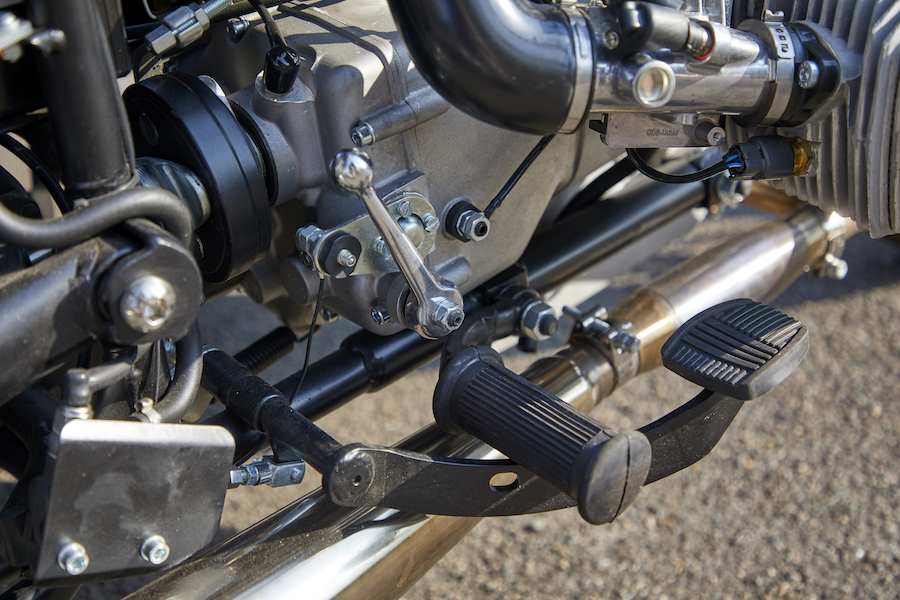 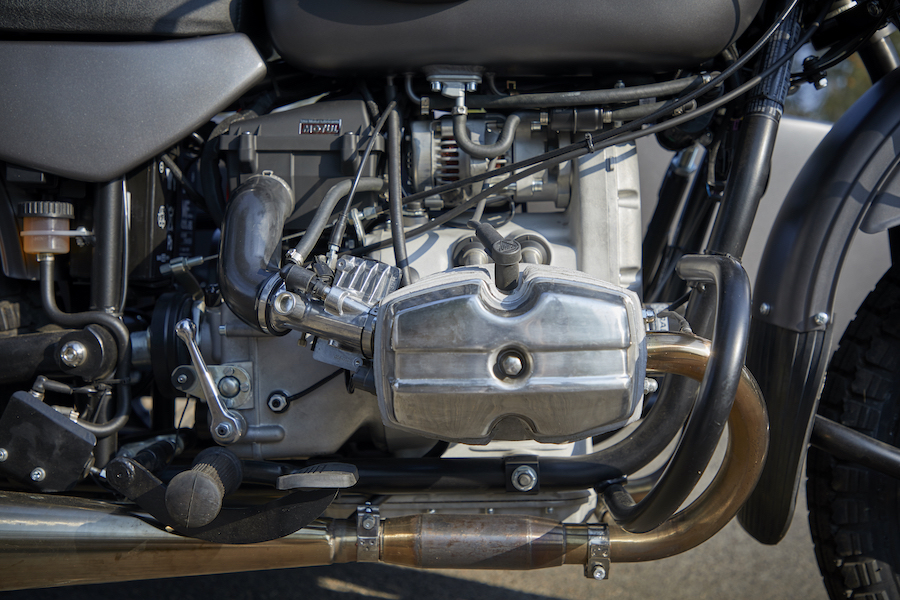 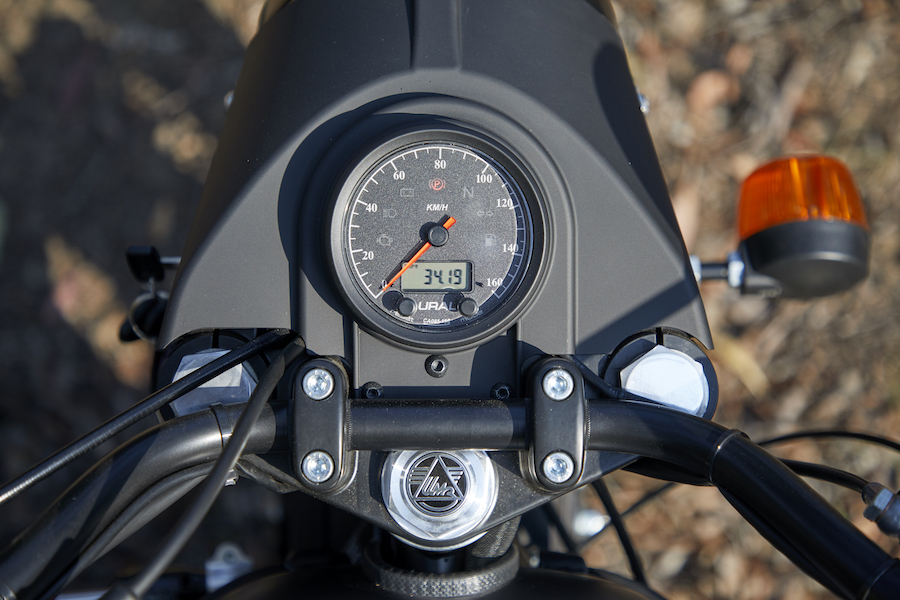 Plus lots of tips to deal with the delightful quirks of owning such a unique machine; like allowing your bike to cool for 20 mins every two hours, and a list of what ‘Offroad riding includes’ – fire road, desert trails, snow covered, obstructed, rutted, pot-holed rock covered paths, beaches, mud holes. Gee, thanks Ural. You can’t help but love this brand.

I was keen to test the 2019 Ranger on a long-haul ride out to Central NSW. I needed some ballast for those left handers so I took my eight-year old son, connected us via helmet comms so we could chat about the drought and other big issues along the way. Unfortunately it took me at least four hours to feel comfortable enough to say much more than ‘whooooa!’ Riding a sidecar is weird. And wonderful.

I had done some training at Uralofoz.com.au four years ago, so it wasn’t completely foreign to me – just a distant memory. Ten hours is the average time required for an experienced rider to feel safe. Until the comfort kicks in, survival instincts and reactions are coming thick and fast. Those survival reactions of backing out of cornering and reacting adversely to the sidecar doing unfamiliar things have caused deaths in the past, so I am reminding myself to relax my upper body and arms which lowers your centre of gravity and helps keep the sidecar’s wheel down. And it’s not easy to do. Flying the sidecar wheel was quite easy in a straight line or around a slow corner. Keeping it down with control and at speed was the tricky part. Winding along the Bells Line of Road heading west out of Sydney, speed advisory signs can normally be doubled on a motorcycle, but I was more than happy to match them – 80km/h can feel like 120 on these things.

Compared to modern machinery, the engine might feel underpowered but it doesn’t take too long to be happy with the 41hp available. With all the weight of the very solid steel-construction 750cc, the number might seem a little underwhelming, but with some attitude adjustment, performance expectations were tempered to a point where I could really enjoy the relaxed nature of the low-revving engine. And it only really becomes noticeable when your riding companions are on R 1200 GSs whose comfortable cruising speed is much faster than the Ranger. I settled on 100km/h, but 90 would have been better, especially for fuel economy. I averaged 8.85L/100km with the Ranger’s 19-litre fuel tank and a 10-litre jerry can. In fact, I quite enjoyed running out of fuel every 200km for a leg stretch before whipping out the jerry can like a pit-crew pro, but I was wondering when I might find a need the shovel attached to the sidecar. Still, it looks cool. 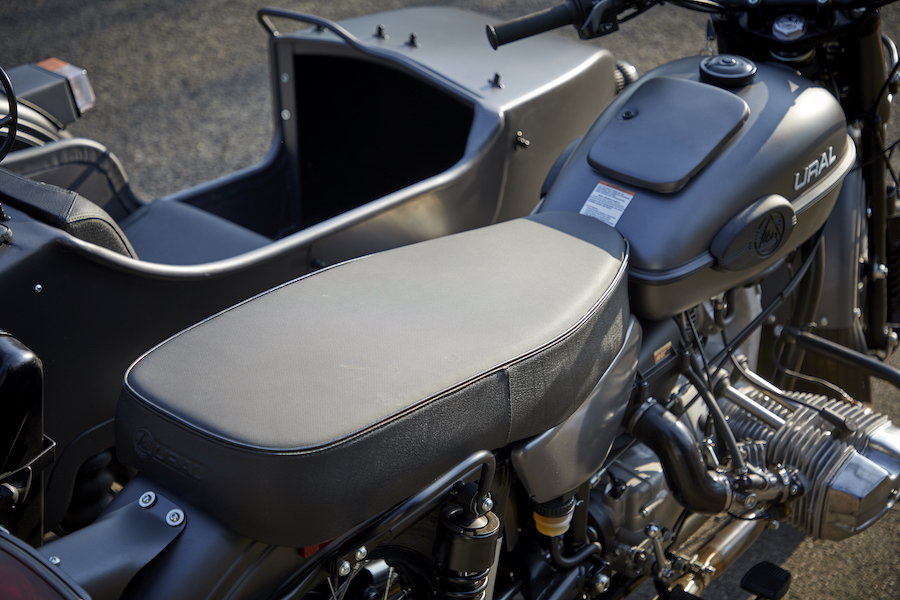 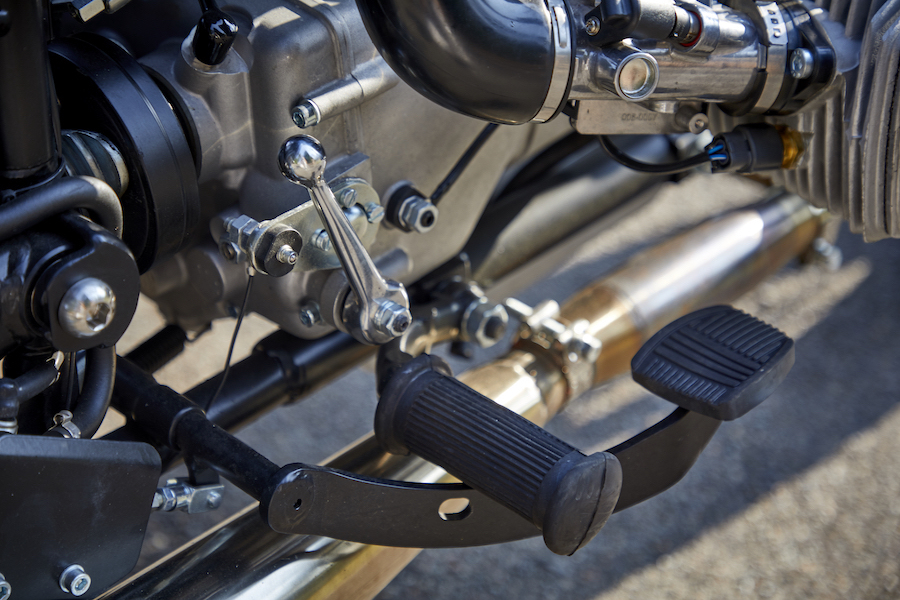 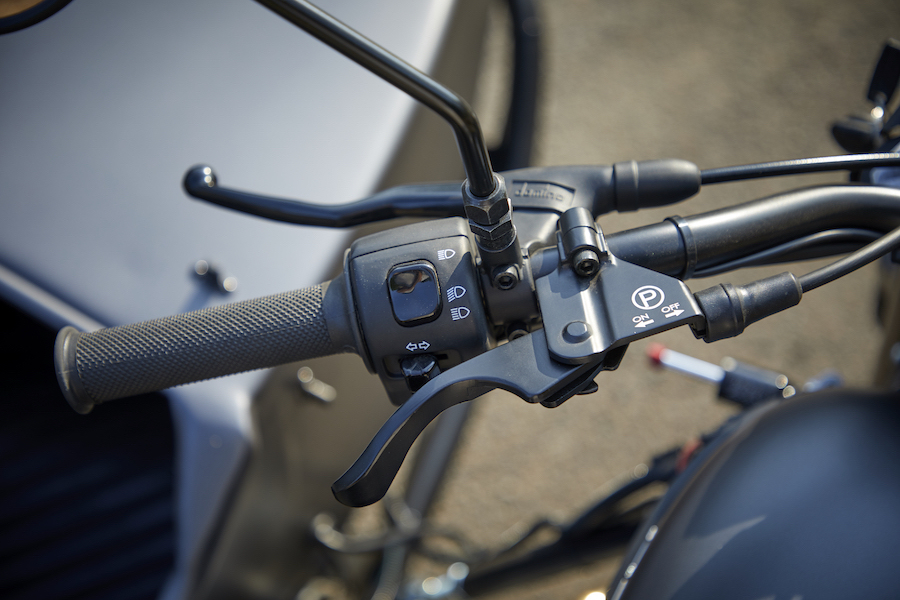 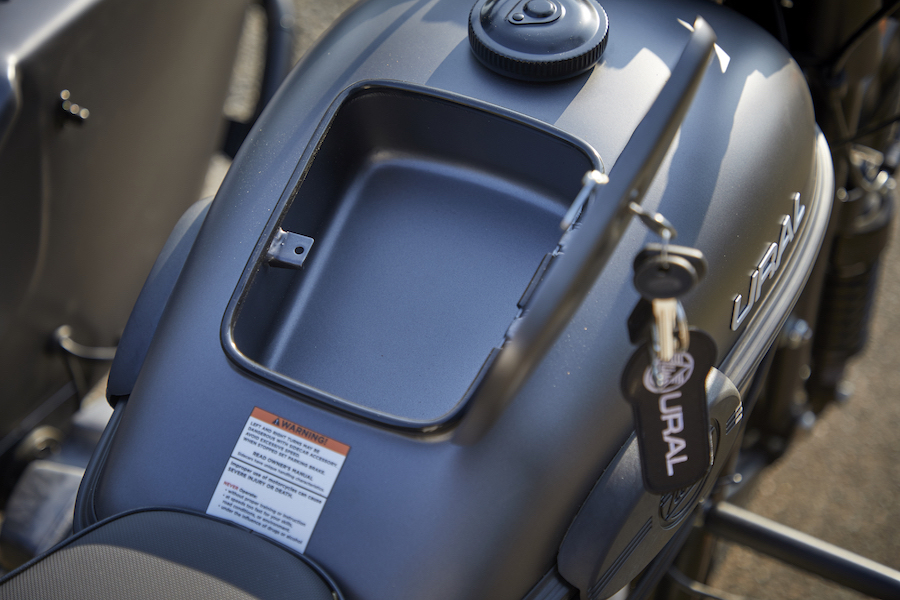 Save for the smoothest of freeways, riding the outfit on the bitumen was tiring for a career two-wheeled guy like me, those handlebars require a lot of input. Just riding along a straight road is a challenge when you have to consciously make the bike go in a straight line. The camber and undulations in Aussie roads are constantly trying to drag you off the road or into oncoming traffic. A regular bike is always in line with the earth’s core, but not an outfit, it’s all over the place. A regular bike steers by counter-steering above about 10km/h, but an outfit is always directly steering in the direction you want to head. That actually feels quite natural apart from the effort you have to put into the bars to turn it, while – of course – remaining relaxed to keep your centre of gravity as low as you can.

Accelerating sends the bike to the left and shutting the throttle sends it to the right. Now imagine changing gears. Yep, it’s quite absurd. And awesome. Throttle off, squirm right, grab a gear, throttle on, squirm left, steer to correct. On an (always scary) left hander when things are getting hairy, you can accelerate for that little bit extra cornering ability. But it’s on a right hander where the real magic happens. When you are brave enough to approach a corner at a decent clip, turn the bars right until it is skidding or ploughing up a dust storm, then hold it with all your energy until you hit the apex. Shut the throttle and the back kicks around and lines you up for a perfect straight-line exit. It’s like a Marquez miracle (okay, maybe not) and so much fun in the dirt when the back can slide out a foot or two, and it’s incredible the difference it makes to the sidecar’s cornering ability. Even lefts were beginning to be fun as the rear started sliding taking the anxiety out of the wheel lifting mid corner.

Through left- and right-hand turns, the Ranger gripped the road and gave very different feedback.  At decent speeds on bitumen roads, left handers feel like lot of weight is being transferred to the bike’s wheels and the tyre’s sidewalls feel like they are squirming and twisting under the sideways pressure. They are rated to handle it, of course, and backed up by massive stainless steel spokes. Right handers are radically different. You feel like any speed is possible due to all three wheels being pushed hard down into the road surface and it feels like there is no pressure on the sidewalls at all, just where it should be on the footprint of the tyre. 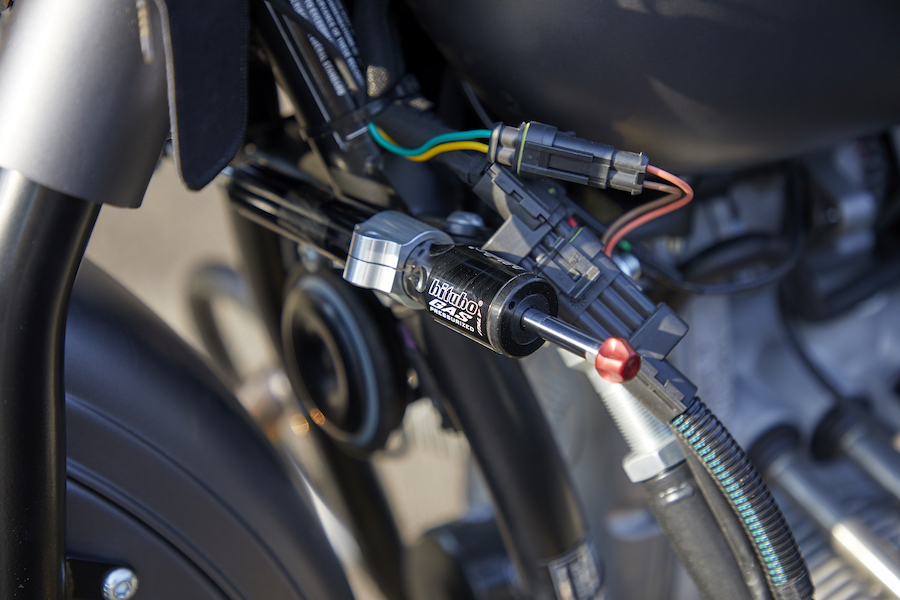 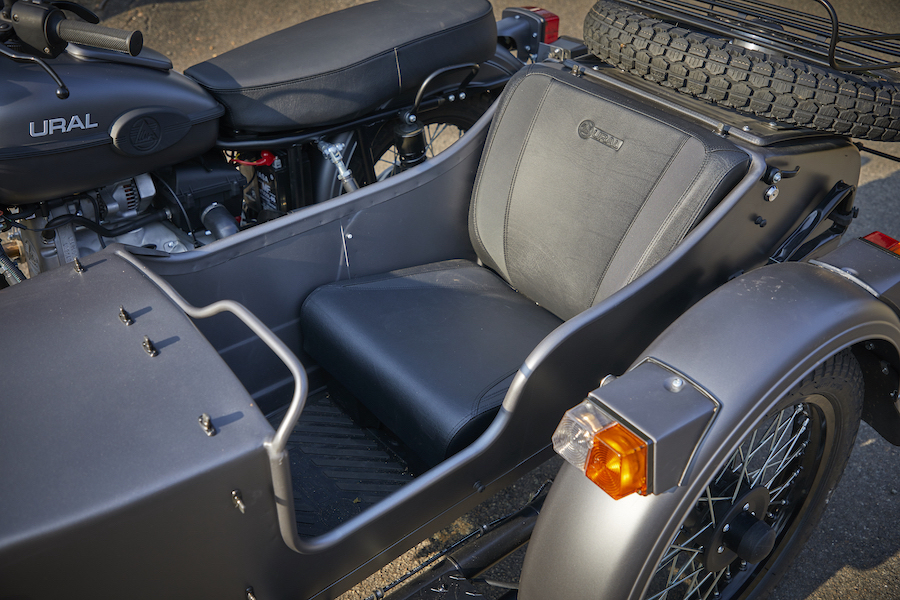 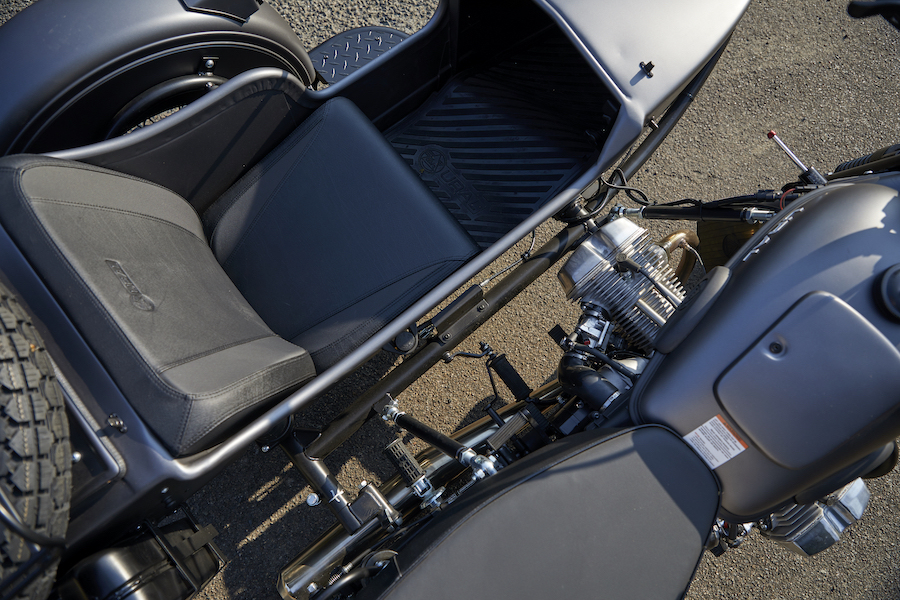 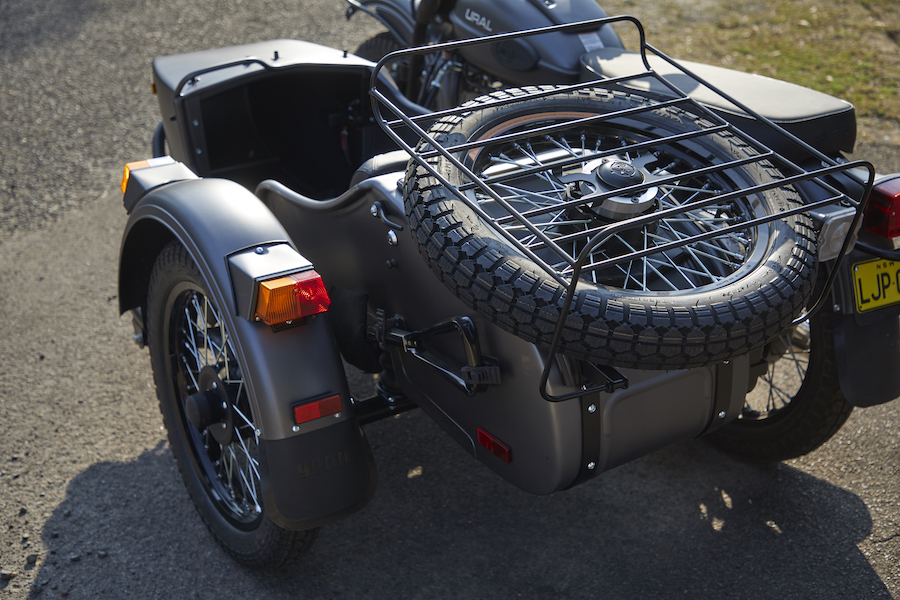 The front tyre feels slightly lighter under acceleration and therefore giving less grip which is extremely noticeable around right-hand corners and over bumpy roads. As the tyre briefly leaves the road surface after the bump, with all the input you are putting into the ’bars throughout the whole corner, the bars have a minor throw towards the steering lock, followed by a kick back to the previous steering position upon grounding the tyre again. It’s a dead-set wrestle and enormously exciting stuff. The sidecars riders in WW2 movies weren’t over acting at all with all that body language.

All this effort isn’t really noticeable when going for a Sunday cruise, but these Urals can get going if you’re mentally and physically up for it. I had always thought of a Ural as a machine for hard-core adventure and I really enjoyed the challenge of 1200km over two days.

If I owned one I would slow the pace down and have it as my sunny Sunday morning cruise bike. I’d occasionally surprise a few sportsbike riders (on right handers) and probably even the odd adventure rider, too. The ranger boasts a fully interchangeable spare wheel which mounts above the luggage trunk which has a capacity of 83 litres. The sidecar comes equipped with a 12-volt power outlet and has a tonneau cover to protect it when there’s no one sitting in it. As well as the decent-sized luggage rack, the Ranger comes with a 10-litre jerry can as standard fitment, as well as folding utility shovel and LED fog lights. Starting is either by a thumbed button or a kicked lever and there’s a reverse gear, too, which is essential on a 335kg (dry) machine when your feet don’t touch the ground.