Red Bull KTM toasted their second MotoGP victory in the space of two weeks with Miguel Oliveira’s brilliantly judged first-ever success at the Red Bull Ring for the BMW M Grand Prix of Styria. The 25-year old not only claimed the first win for his Red Bull KTM Tech3 team in MotoGP but also for Portugal. Pol Espargaro fought for the checkered flag until the last corner and scored his second career podium in 3rd place. KTM had all four RC16s in the top ten; more than any other brand. Celestino Vietti posted KTM’s second Moto3 victory in a row. 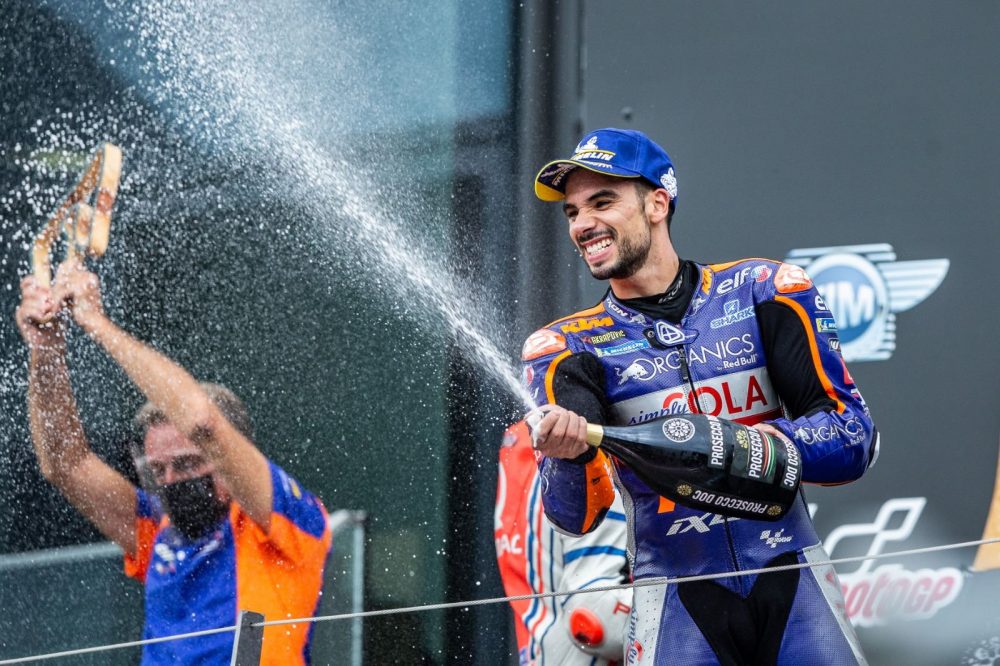 A second Grand Prix in the space of seven days took place in the picturesque but challenging setting of the Red Bull Ring in Spielberg. Espargaro set off from Pole Position for the fifth outing of the season. The Spaniard launched from P1 for what was the first Pole for the factory (and the rider) in less than four terms in the premier class of MotoGP and just four years after KTM had announced their MotoGP plans and ambitions at the same circuit.

An accident midway through the 28-lap spectacle produced the red flag for an air fence to be repaired at Turn 1. The 900th premier class race was restarted with a 12-lap distance and with all four KTM RC16s hunting the leading group. Espargaro surged to the front and engaged in a thrilling duel with Jack Miller on the last circulation. Miguel Oliveira was also extremely close and poised to make the most of any mistake. When Espargaro and Miller ran deep into the final turn Oliveira read the situation to perfection; powering past to claim the checkered flag on what was his 150th Grand Prix start. The result was also noteworthy for Red Bull KTM Tech3, representing their maiden triumph in the premier class in just their second campaign wearing KTM colors. 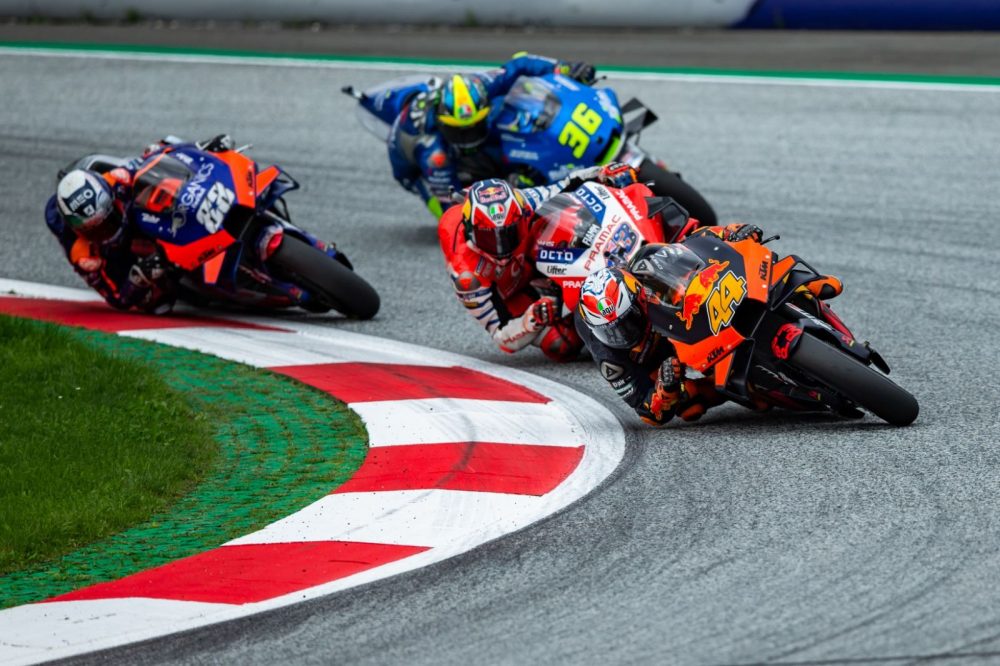 Brad Binder secured 8 points for 8th position and remains 4th in a very close world championship table. The South African rookie was again very quick to make ground with the front-runners. Iker Lecuona charged to 10th. The Spaniard ended a positive fortnight at the Red Bull Ring: he notched his best ever MotoGP classification the previous Sunday with 9th and then his second top-ten result at the Styrian event.

KTM are 3rd in the Constructors standings, just 6 points away from the top. Their excellent progress as the youngest manufacturer at the highest level means they now concede their concession status and will join their rivals in terms of testing, wildcard and engine limitations. An achievement in itself. Oliveira’s success ended Ducati’s clean sweep at the Red Bull Ring since 2016. 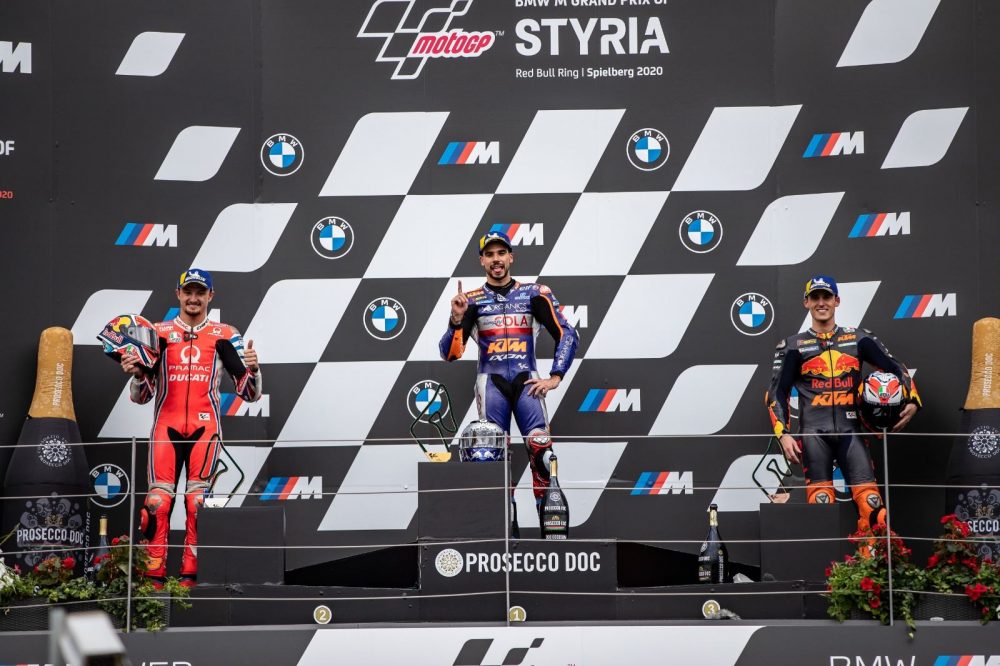 Miguel Oliveira: “I’m very emotional…there is so much I want to say but I cannot at the moment. A big thank you to all the people that believed in me starting with my family, everyone in the team, sponsors and the Portuguese crowd. Thank you so much for your support. This is history today for me and my country and I couldn’t be happier to do it here in the home of KTM and Red Bull.”

Pol Espargaro: “Anyone can win those kinds of races! Pretty crazy. I was fighting with Jack until the last corner and Miguel was able to profit but that’s racing. It was a beautiful race. Anyway, we made the podium, we are up here and I’m super-happy.”

Brad Binder: “It was a good race. The first one was going really well and I was slowly catching up ground. To get up to 6th was already great. I felt really, really good. Unfortunately with the red flag and the restart I didn’t make the best decision with the tires and really struggled to stop, even running off at Turn 1 but I was able to come back to 8th. All-in-all we should be happy. I gave my best out there and the bike was fantastic. The team worked really well and I’m super-excited for the next race. I think we can do a good job at Misano.”

Iker Lecuona: “For sure, I’m really happy. I finished in the top 10 again. In the first race, I overtook many riders, I had a very good pace and I was in ninth position. The best for me was to pass [Valentino] Rossi, because he was always my idol. This moment was very important for me. In the second part of the race my start was not great, I lost some positions, but I came back, stayed in 10th position and was having some great fights. I’m really happy. Thank you to my team. Thank you to KTM for the opportunity and congrats to KTM for Pol and obviously to my teammate Miguel!”

Mike Leitner, Red Bull KTM Race Manager: “An unbelievable race. We had all four bikes in the top ten at our home race and with two riders fighting for victory. Pol was pushing all the way with Jack on the last lap and we know that the last two corners are crucial at this track. Both went wide but fortunately Miguel was in a great position to bring home the race and we’re super-happy about that. Both riders deserved it because Pol rode so well. Brad and Iker also scored good points and we have shown that the performance of the RC16 is really there.”

Pit Beirer, KTM Motorsports Director: “It is hard to find the right words after such a wonderful day. I remember so well our first GP in Qatar when we started from last place and my words to our CEO Mr Pierer that we would turn things around and park our bike on the other side of the grid. We’ve had a double today: Pole and a win at our home Grand Prix with Moto3 as well and all four MotoGP bikes in the top ten with two on the podium. The project overall has been amazing. We have gone our own way and that approach is paying off. The team spirit and the atmosphere with so many people here at the circuit and back at the factory pushing like crazy bringing the results: it’s like a dream come true. I will need some time now to realize what has happened these last weeks.”

Hervé Poncharal, Red Bull KTM Tech3 Team Principal: “What an incredible day, incredible emotions! It is something like forty years we’ve been in this business and we never won a MotoGP race. Today our dream came true. Here in Austria, which is in front of our title sponsor Red Bull, in front of the KTM management, our manufacturer. I would like also to dedicate this victory to Miguel because he has been pushing a lot. Year one was not easy; he was injured the second half of the season. We’ve been fast since the beginning of this year, the bike improved, he improved. Now we’ve done it. I’m very proud to see two KTMs on the rostrum. Clearly, this is now one of the bikes to beat. So let’s celebrate tonight and let’s hope there will be some other exciting days like today.” 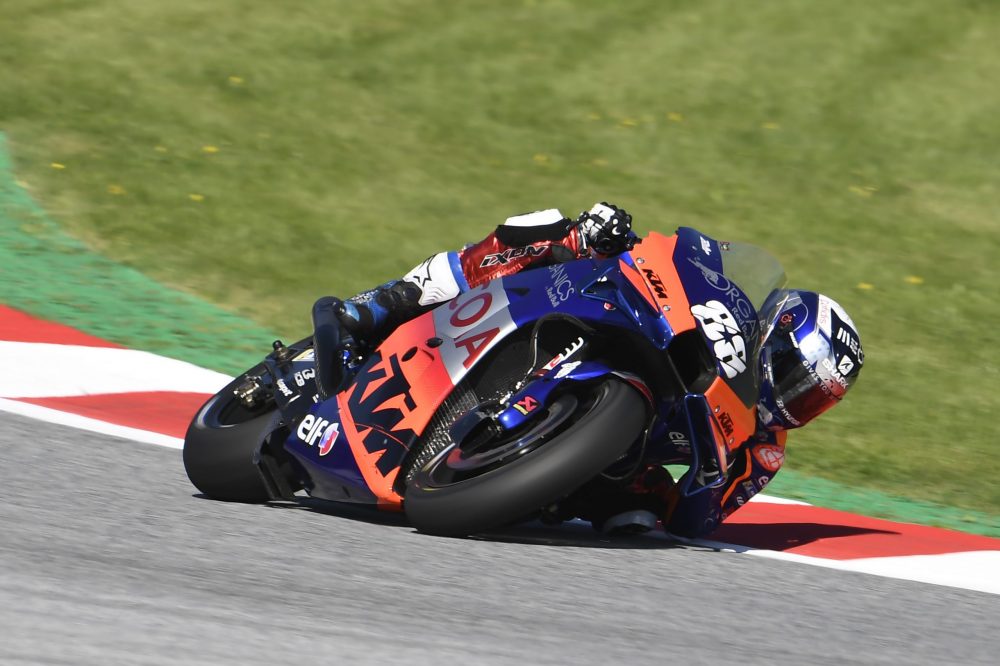