Kawasaki’s Z650L, replaces Kawasaki’s popular ER-6n and so had plenty to live up to. Producing 39kW and 59Nm from its 649cc parallel-twin engine, the Z650 is only available in one power-output option which slips in under the LAMS-approved power-to-weight limit. While it’s not going to trouble the likes of the Street Triple and Brutale 800 for outright grunt, it easily packs enough punch for it to go from being a learner rider’s first bike to transforming into their forever bike. The Z650L sits in Kawasaki’s range alongside the faired Ninja 650L, which is the same bike with a fairing fitted, however most wouldn’t pick it from its styling with clever design cues which gives the impression it has been built as a nakedbike from the ground up. The most eye-catching feature is the metallic green trellis frame.

The seat height of 790mm feels even lower when you sit on the bike, and once you reach to the high-set handlebar and place your feet on the pegs, it’s an upright but comfortable riding position. My lanky frame moulded into the bike like it was almost designed for me. I say almost because the ’bar to seat distance is quite short. The slip-assist clutch provides a nice light lever feel, and while it has a span-adjustable brake lever, the clutch lever is non-adjustable. 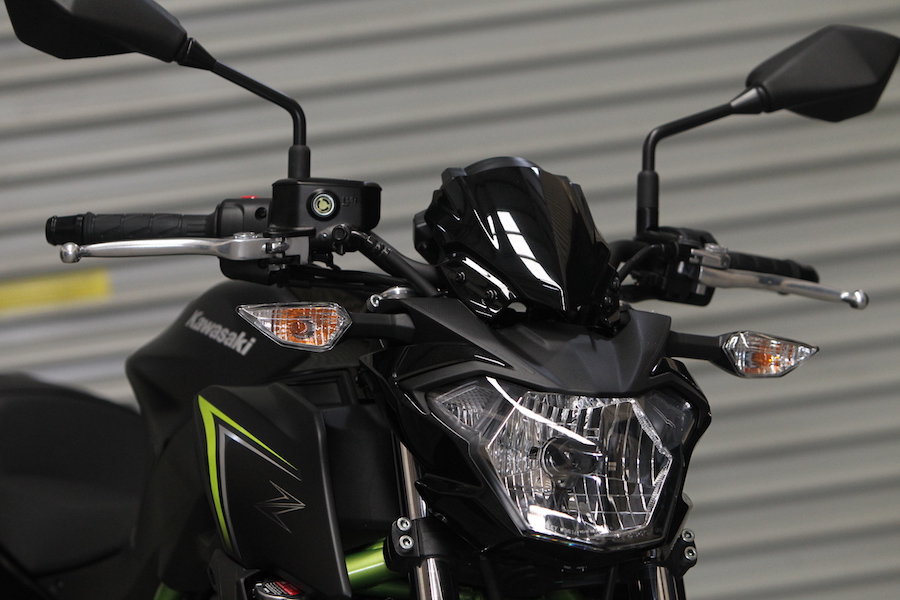 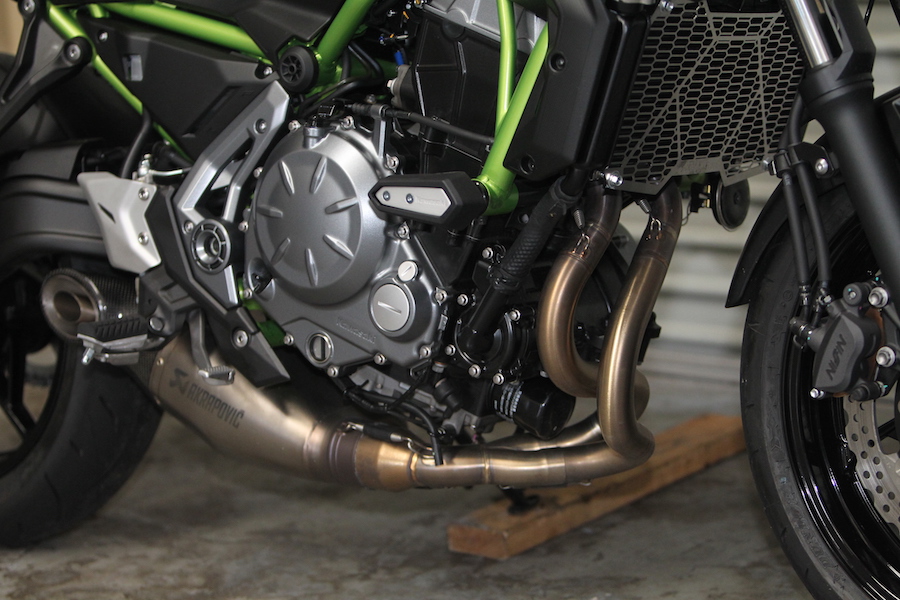 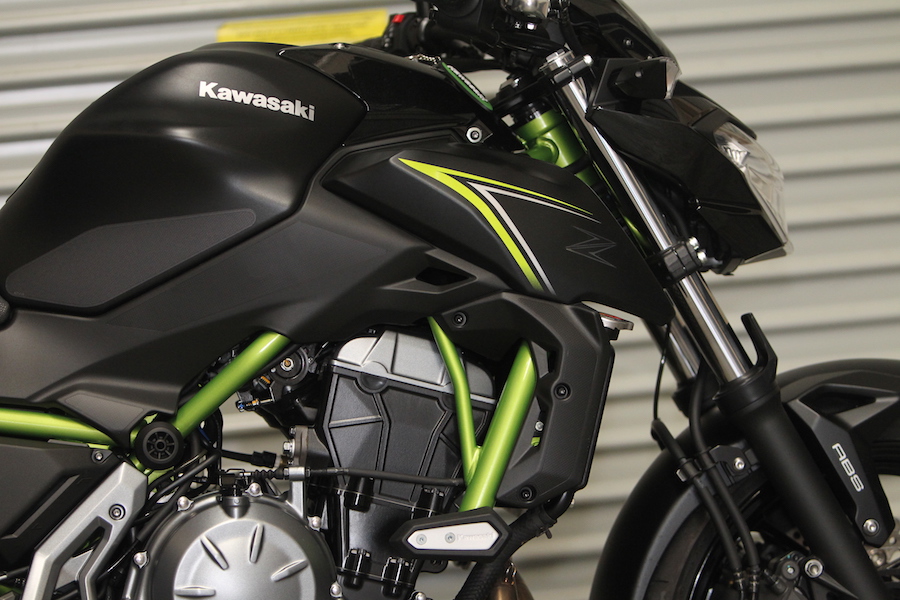 Anyone who thinks the LAMS badge worn by the Z650 is something that should be looked down on needs to take this bike for a spin. The lovely linear torque curve from the 180-degree crank, parallel-twin engine makes punching out of twists and turns a heap of fun. Those new to the art, and still learning about optimum gear selection will find the middleweight Zed more than happy to help out with meaty drive. The torque maxes out at 6500rpm so it’s better to go for another gear rather than trying to feed it more revs.

Built with new riders in mind, the steering is not overly sharp, but rather gentle and predictable. The 41mm non-adjustable fork and horizontal shock, adjustable for preload, provides a supportive ride and can also handle some spirited riding – to a point. The more experienced test riders were able ride the bike beyond the levels the suspension was designed for where things tended to move around a bit at the rear.

The test team didn’t have trouble agreeing on the list of good points about the Z650L and were also unanimous in dislike for the narrow handlebar and the dash layout. 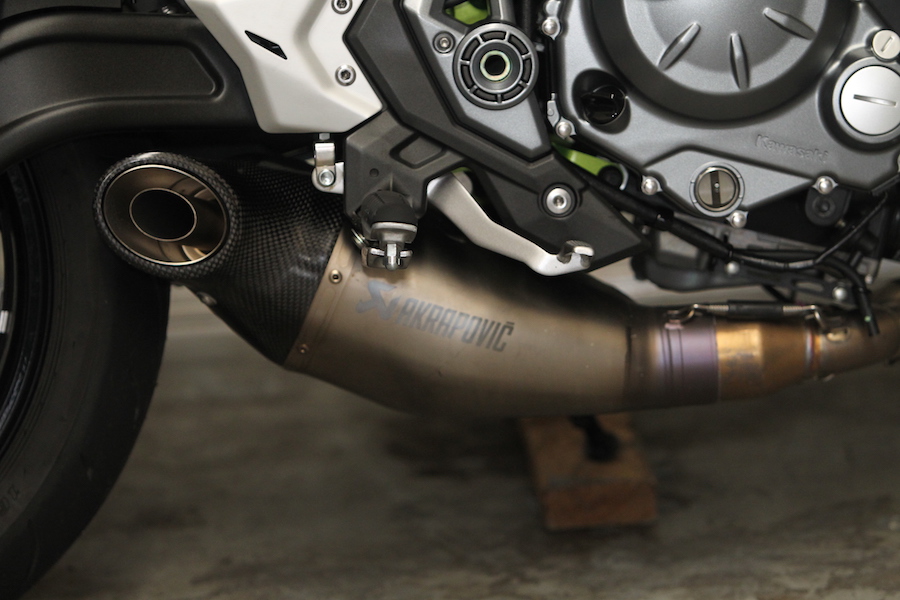 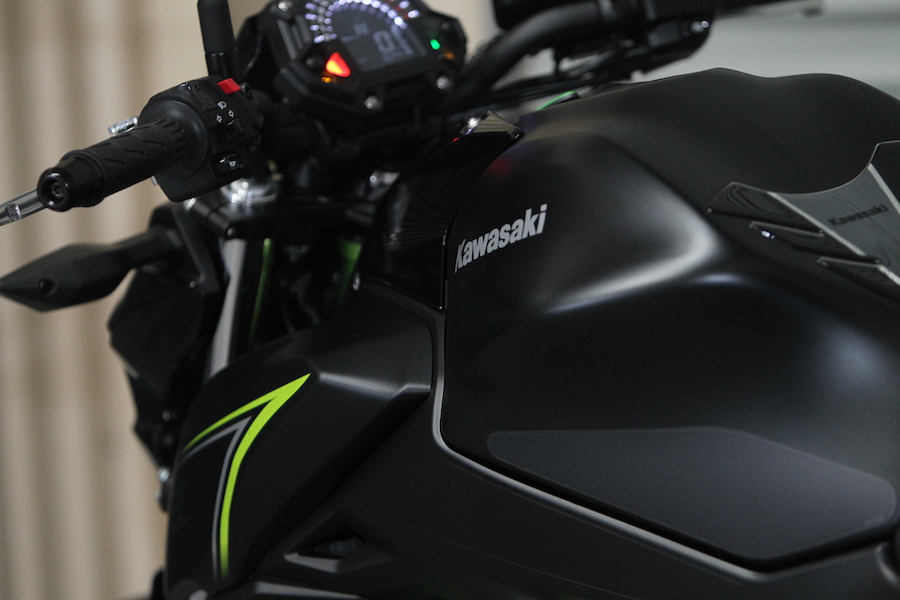 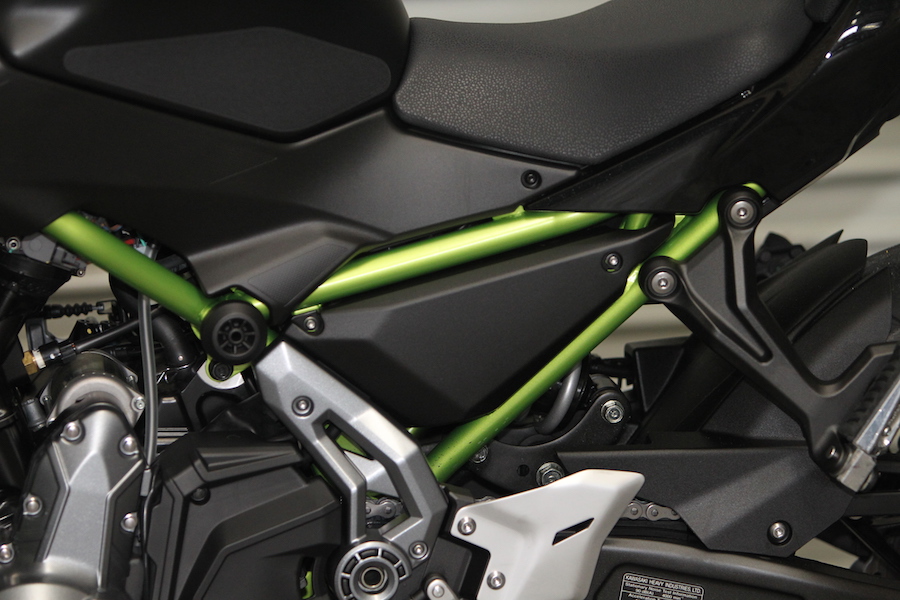 The braking ability of the four-piston calipers, which bite twin 300mm discs, were also a topic of discussion. Some liked the solid feel, while others felt they packed a little too much initial bite for new riders. But everyone agreed that the front-end provides enough confidence to drive deep into a corner, something experienced riders will enjoy and new riders can work up to.

Adding the Z650L to its nakedbike line up in 2017 has provided Kawasaki with an exciting series of stepping stones that starts with the little single-cylinder Z125 Pro and upwards through the 300cc, 650cc and 900cc models before arriving at the four-cylinder Z1000, and there’s little sidesteps to machines like the Z900RS Café along the way. There’s now a lot to be said about going Zed. The manufacturers must have quite a tough time of building a bike for the LAMS market. Building a bike that looks, handles, goes and stops well, while keeping within the LAMS regulations is surely a challenge. Enter the Kawasaki Z650L. It wasn’t until after I blasted through the National Park aboard this little rocket, that I was informed it was a LAMS-approved bike – and I was shocked! Although It was a pretty tight fit for a taller rider like myself and the seat to peg ratio was quite small, this, along with a relatively low seat height, makes it an incredibly user-friendly machine.

The Z650L features a gutsy parallel twin, something Kawasaki has always done a great job of, and it has been tuned for plenty of low-down torque and a fat mid-range.

The chassis setup was quite soft and absorbed the harshest of bumps well, which I reckon was a intentional to limit overly aggressive riding, as well as offering a comfortable ride for new and experienced riders.

Its affordability doesn’t allow for fancy instruments and features such as a quickshifter, however, everything was in the right place with my only real complaint being the cluttered digital rev counter.

Kawasaki has managed to build a learner-approved bike to a budget that looks brilliant, handles neutrally and inspires confidence both with engine and chassis. It was fun to ride and really well executed. The Z650L perfectly hits its design brief as a motorcycle learners riders can grow with. It delivers a confident ride that is happy to give a little more when asked.

There’s a couple of points in the rev range, both high and low, when a vibration is felt through the bit-too-narrow handlebar.