The Tatt’s Finke Desert Race is loaded with memorable moments from its 41 years of history. The inaugural There and Back race from Alice Springs to Apatula and back again in 1976 where just 56 riders lined up for the unknown has blossomed into what is often referred to as Australia’s Greatest Desert Race.

Held over the Queen’s Birthday long weekend in June every year, the Finke attracts around 7,000 visitors to Alice Springs with approximately 10,000 spectators taking in the race track-side. It’s a bloody big deal smack-bang in the centre of Australia. And what’s more remarkable is the fact it is run by volunteers. It’s an incredible feat and a remarkably well run event.

The original King of the Desert, Geoff Curtis, is joined on the winners list by some serious off-road racing royalty in the form of Phil Lovett, Stephen Gall, David Armstrong and Ben Grabham. But its Randall Gregory’s incredible dominance of this great race from 1991-1995 on a series of beastly Honda CR 500s that is still unmatched.

What made Price’s 2016 Finke Desert Race win so remarkable is the fact that he completed the Finke double and almost pulled off the unthinkable. Price not only lined up to defend his motorcycle King of The Desert title but he also entered the vehicle division in a fire-breathing 6000cc Geiser Brothers Trophy Truck.

Here’s the deal. The race length is 226km starting in Alice Springs heading south to Apatula on the Finke River. The cars and buggies race first thing in the morning then once the course is cleared the bikes take off at 11.30am.

Competitors camp the night at Apatula to repair and recuperate then race back again on the same course the following day. Fastest time wins.

The track is brutal. It’s fast and unforgiving made up of rocky hard pack clay covered in dust and rolling sand dunes with corrugations so big they can literally swallow cars. These are called whoops and the whoops at Finke are infamous. There’s also the occasional rock shelf and plenty of dry creek crossings. It’s a hell of a ride. Toby Price attracted his fair share of attention for attempting the Finke double this year. Chanel Ten’s RPM, Chanel Nine’s 60 Minutes and a host of print and digital media swarmed around the KTM superstar to capture the glamour side of this great race.

For the rest of us mere mortals that live and breathe the Finke dust like an annual religious ritual there’s a much more raw side to this whole deal. The pilgrimage to Alice Springs and the battle to finish on a track so beaten and busted you begin to question your mortality at every bump. It’s frightening, fast and highly addictive.

I lined up for my eighth attempt at the Finke this year. On the wrong side of 40 and far from athletic I armed myself with a Sherco 300SEF-R and held my breath for what I hoped would be a clean run.

I’ve been going to Finke since 1999 and despite many questioning my intellect, I have managed to learn a few things over the years. Rule one of desert racing is, don’t crash in the rocks. Rule two is, respect the desert. Rule 3, you never see an unlucky champion but as there is only one champion each year expect there’s bound to be bad luck looming.

Having completed seven Finkes from seven starts over a 11 year period I knew I was perhaps pushing my luck for another clean run. But sitting on the side-lines isn’t living so I threw my hat in the ring one more time. Not to break any records or fool myself I could run near the tops guns but to just have a go.

There is no feeling like clicking into top gear as you round the final turn for the last time and hold it pinned to the finish line. There’s so much effort involved getting to the start line let alone the finish which makes completing this great race so bloody rewarding.

My mid-sized thumper raised a few eyebrows for those with horsepower blinkers on. The 303.7cc French enduro rocket might not pack the punch of Price’s KTM 500EXC but it’s got more than enough for me.

The 8km prologue to determine race start order was held Saturday. Riders set off two at a time. I got smoked off the line but rode a safe and honest lap to 241st outright and 18th in class 7 for riders 40-45 years. I’m always nervous at prologue.

Race day-one was fairly uneventful for me. The first 10km was a haze of dust and mayhem with riders all over the shop. The top 20 riders are set off two at a time while us hacks are set of in groups of 10, one minute apart.

I rode tight and awkward until my first fuel stop at 80km. I got cracking after that and kept it clean and fast until the 140km mark. I was pleased I was half way in but I took a breath as the really gnarly stuff starts here. The monster whoops are killer.

My hands went numb, my legs were burning and my lower back was tighter than Paul Hogan’s forehead. Those bastard whoops stretch to the horizon and as you crest the dune they go on to the next horizon. I rumbled into Finke in 198th position.

I required two coffees before I could lever myself from my swag on day-two. Due to lack of technique I got smoked off the start again but found a rhythm and quite enjoyed my ride back to Alice Springs. It hurt less and my time was quicker. 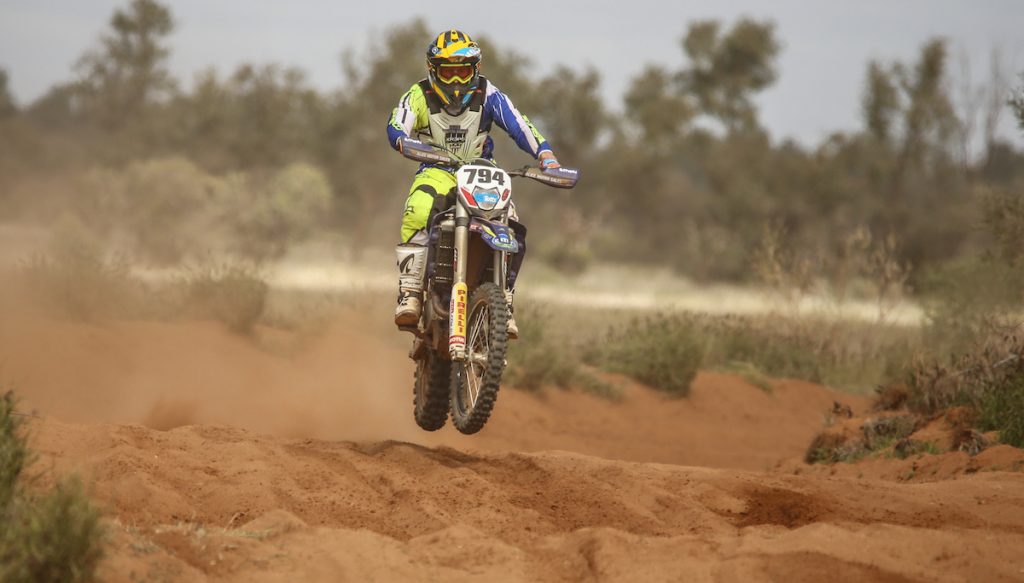 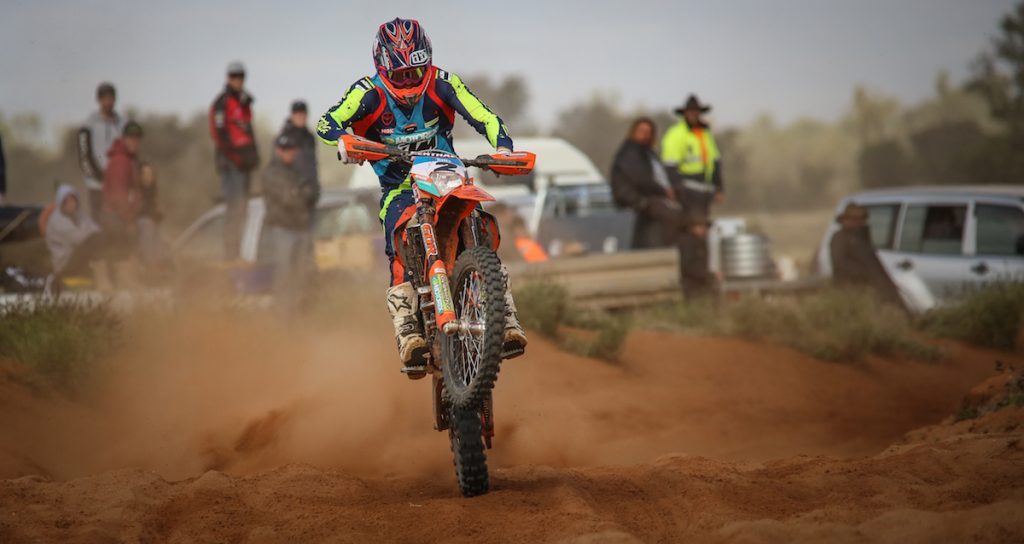 Tye Simmonds on his way to second

What amazed me yet again was the deterioration of the track from the day before. The cars and buggies tore it to pieces and the square edges and holes beat my hands and arse to oblivion.

A total of 410 riders entered the event and 329 finished. I crossed line in 190th place and 18th in my class of 38. It was so bloody nice to finish again. This race equally scares you and rewards you. It’s a strange conundrum but surviving it makes me smile. Riding a dirt bike over this mongrel track is living large to me. FRONT OF THE PACK

For the serious competitors it was the Toby price show from start to finish. Toby blazed a 4:58sec prologue time which was a massive eight seconds clear of the next placed rider. Hold a big-bore dirt bike flat-out for eight seconds and you can go a long way.

Sure Toby was fast but could he really be competitive after racing the trophy truck? Price had to battle his way to Finke in the trophy truck in good time to then board a light aircraft back to Alice Springs in time to get on the bike and do it all again.

Price was the 5th vehicle into Finke after staring in position 19. Price was back in Alice Springs looking fresh as he nailed a booming holeshot on his KTM 500EXC and was never troubled on his ride to Finke. Tye Simmonds came in 2:35sec behind.

Price pulled off an amazing drive on the return leg to put his trophy truck in second place before flying back to begin the final ride home. The legend was howling and making it look easy. Price crossed the line in a total time of 3.46:55. His time in the trophy truck slightly better at 3h.45min:40sec. You see some strange things in the desert

The Tatt’s Finke Desert Race is a must-do for any petrol head. You can find loads of information on the race at www.finkedesertrace.com.au and if you can’t be there you can watch live streaming at this site.

The best way to take in the action is to camp along the track for the weekend. The sound of a screaming V8 trophy tuck slamming whoops 1.5-metres deep is life changing. Watching the top 10 riders float above the minefield of holes, rocks, whoops and car debris will make your hair stand on end.

Finke is a massive weekend in Alice Springs so if you’re looking for accommodation you need to book early. Access to the race track is easy with a dirt road running parallel with much of the track. You can camp just about anywhere if you behave yourself and take your rubbish home.

There’s regular flights in and out of Alice Springs but the best way to get there is to drive. You can take in some amazing sights and visit some special places before and after the race. The centre of Australia is an amazing place and we’re so bloody lucky to have this race staged on this beautiful battleground.

It might not be as big as the Moto GP but for us riders who love a bit of dirt in our lungs it’s better in every way.