Italy, a land of flair. A place where metal and aluminium is carved and curved into mechanical pieces of art. Ferrari, Ducati and Lamborghini are the big names that have forged their way into the history books, and there are so many more that have come close but failed.

There seems to be a success story gone bad around every corner, yet the Italians are proud of their past and of their history, and that’s why we see regular resurrections. Fantic, SWM and even MV Agusta have all returned from the dead, some in a big way, some only small. Now it’s the turn of another could-have-been giant, Benelli.

Benelli has tried to beat the system and stay afloat, sometimes lacking resources, money or marketing strategies to get the job done. Now it seems the struggle is finally over, with strong financial partners offering better production lines, and with good design engineers once again churning out the ideas. All-new models like the TRK 502 are starting to flow, and this time it seems Benelli is here to make a serious impact. At $8790 (ride away) and with all the important bases covered, the TRK 502 provides a whole lot of bang for your buck.

Built in the vein of a soft-road adventure bike, the TRK 502 offers a lot of advantages to the everyday rider, learner or otherwise, with a well thought out, multi-use strategy.

Its styling is immediately reminiscent of Aprilia’s Dorsoduro or Triumph’s Tiger, although, being a learner-approved offering, its closest competition is Honda’s crossdresser, the CB500X.

It gives the impression of quality and is a motorcycle that owners would be proud to park in their driveways. It meets the LAMS requirement, but will appeal to many more riders due to its practicality and size. It’s the type of bike one can happily just lope along on, enjoy the scenery, use as a daily work hack, or cover big kays on – and it’s something different.

The TRK 502 has been designed around and built to a price point while remaining a quality product. It means that there aren’t too many of the high-tech gizmos adorning the 502 that we’ve come to expect from a bike like this. But I would choose quality over gizmos any day. 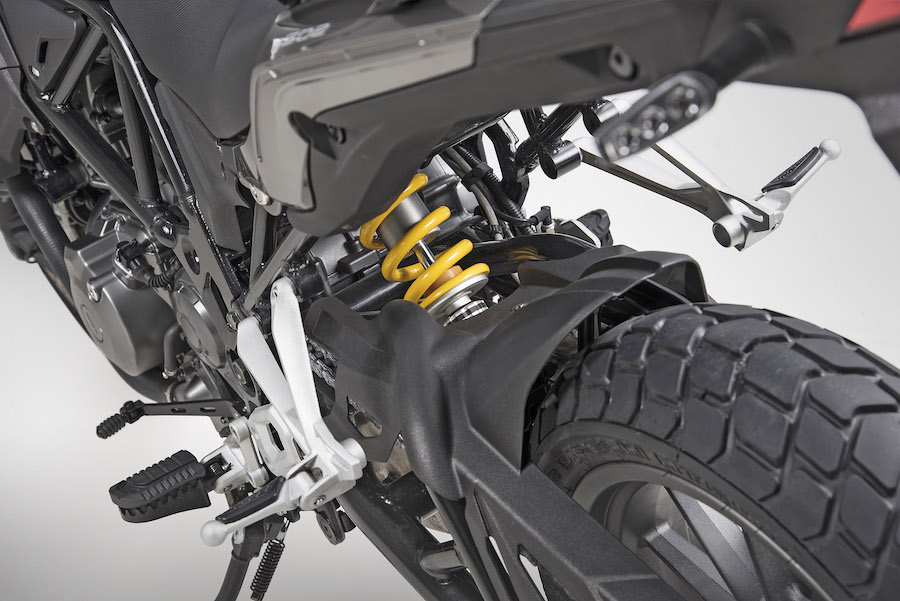 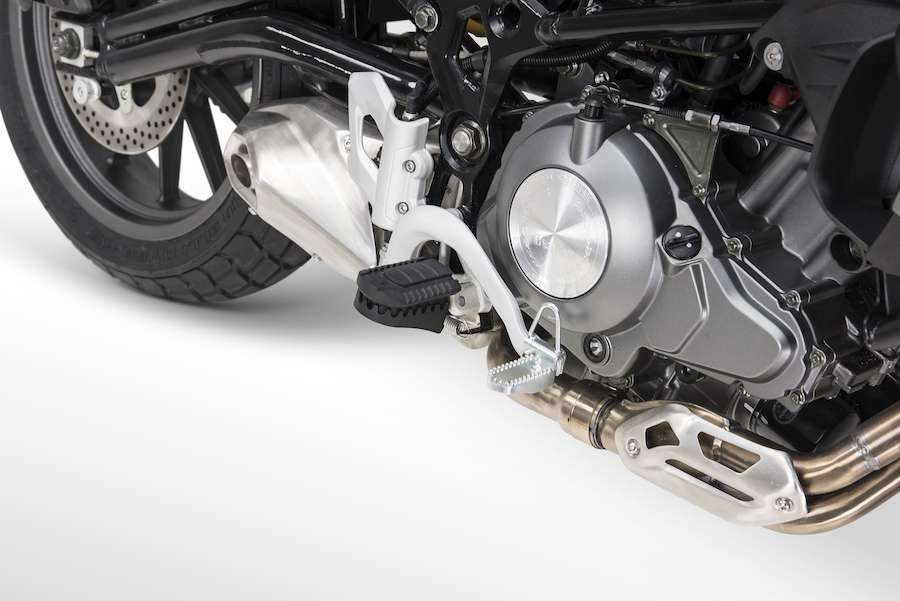 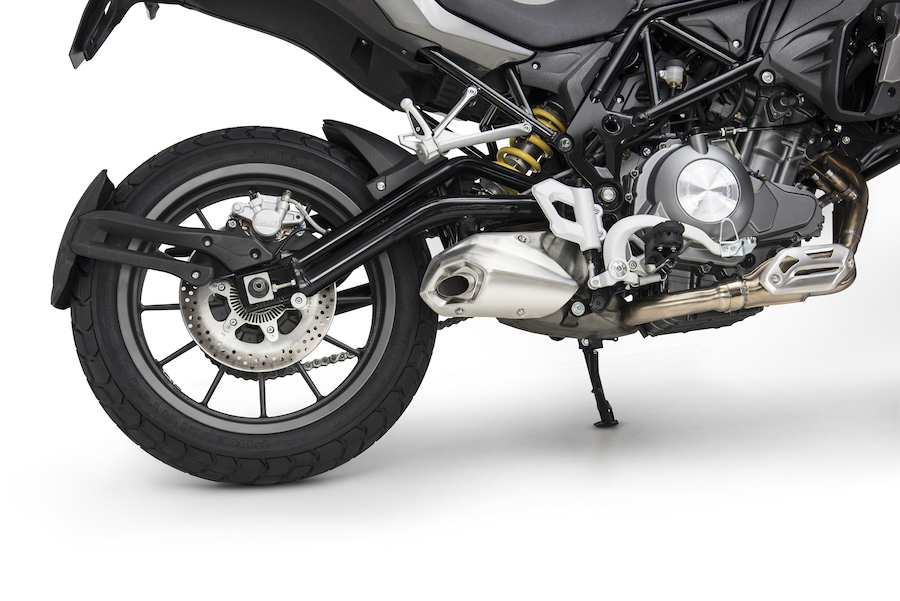 The TRK 502 is powered by a fuel-injected 499.6cc parallel-twin that shares the same bottom-end as the firm’s BN 302. And, according to Benelli, the BN 302’s bottom-end was initially designed to accept various capacity top-ends, so reliability issues from overstress are unlikely to occur.

The frame is a steel trellis type, which bodes well because I haven’t yet ridden a bad-handling bike with a trellis frame.

Its build quality is definitely of a high standard and the lines are pretty stunning.

The 502 comes with a six-speed gearbox, ABS, USB socket, preload-adjustable rear suspension, Pirelli Angel tyres, a tall, wide touring screen and handguards – all features that give it the perception of being far more expensive than it is. It’s hard to believe that we are talking less than nine grand on the road for a bike of this capability.

It’s certainly a lot of bang for buck, but it’s no burger with the lot. It comes with no ride-by-wire throttle, no adjustment for the 50mm front fork, no traction control, and the dash offers only basic information – just a couple of tripmeters, a speedo, an analogue tacho and a fuel gauge.

But the thing I liked the most about the TRK, and the thing that made me not give two hoots about the missing cream, was its practicality.

The fuel tank, at 20 litres, is huge and for me it’s the well thought out features like this that make up for the lack of glitter. And that’s before I start on the amazing economy matched to the big tank; I’d expect at least 400km between refuels with a tank like that – either on a country road or on the way to work – and stopping less often for fuel makes for a less stressed life, I say.

Fire up the TRK 502 and you’re met with a very familiar sound, a little bit like the burble of a horizontally opposed BMW GS, due to the firing order being similar on the Benelli parallel-twin. Even when you give this bike a rev, similar undertones are there, which is pretty cool because I love that sound. It doesn’t go like the big 1200cc BMW, of course, but it gets along well for a 500cc with 35kW (47hp) on tap and with a spread of usable and predictable power. With those power figures, it still meets the LAMS requirements – which has to be part of Benelli’s strategy to sell more units – but at the same time it still has enough power to have a hell of a lot of fun, regardless of your experience.

The 502 did a more than adequate job of everything I asked it to, otherwise it wouldn’t have been fun; overtaking, taking off from the lights and cruising on the freeway. With its 17-inch road-focused wheels and rubber, this machine is well at home on the highway. And when you’re chewing through the miles, there’s plenty of time to ponder different parts of a bike.

The most obvious one is comfort, which is important if you are sitting still for a hundred or so clicks (or, in the case of this bike, up to 400km!) at a time with not much to do but make sure you stay at the indicated speed limit.

The seat is plush, but firm. And while the ’bars may be a touch high for some smaller riders, it suited my 180cm frame perfectly.

Its comfortable and extremely well balanced, even though it carries a relatively high amount of heft for a LAMS-approved bike. At 235kg (wet), it just might turn away some inexperienced riders, but I can’t stress enough how predictable the weight becomes once you’re underway; on the go this bike is nimble and feels light, but in the car park it’s not. To be fair, there probably isn’t a light bike among its competition. But size and heft are often the nature of an adventure-touring beast.

The brakes work well and, although they are stamped Benelli, they look suspiciously Brembo. Their initial bite is adequate, there’s plenty of predictable power thereafter, and in a panic stop with the ABS it all works with no surprises.

The cable-operated throttle pick-up is smooth and through the twisties the 502 was a lot of fun to ride. It kept its composure through the curves as well as it does among the traffic. And on the freeway – where you’re sitting high and with excellent vision of your surroundings – nothing stood out to me as an oversight from Benelli, or something I’d modify as an owner. 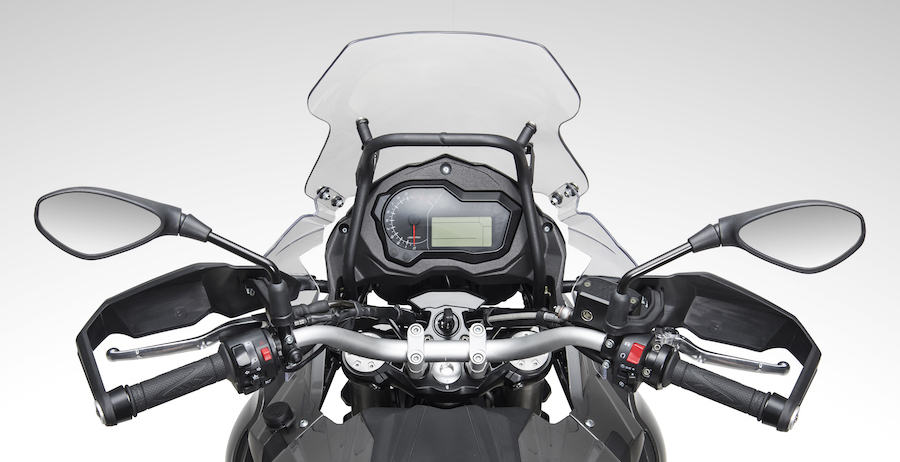 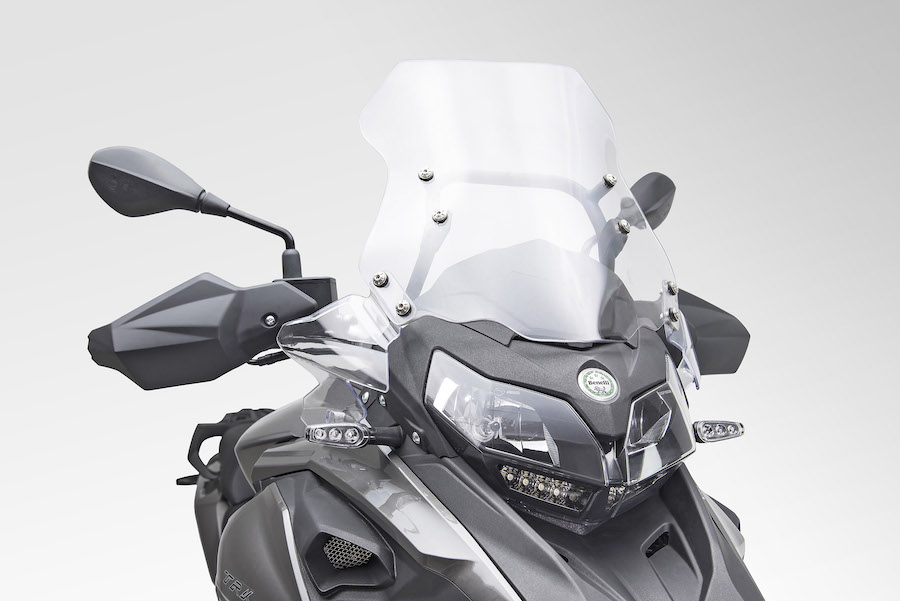 Even the seemingly basic suspension works well with its very minimal adjustability (only at the rear), and it’s for these reasons this bike is such great value.

There is a larger screen available for serious touring, but to be honest the standard screen works really well. Benelli has also partnered with Italian luggage supplier Givi for various options to set the bike up with hard aluminium panniers and a top box.

This is a lot of bike for not a lot of money and it’s a bike you could be happy with long after you earn your full licence.

Add to that Benelli’s two-year warranty and two-year roadside assist program and there’s little wonder that Australia is putting its money where its mouth is. 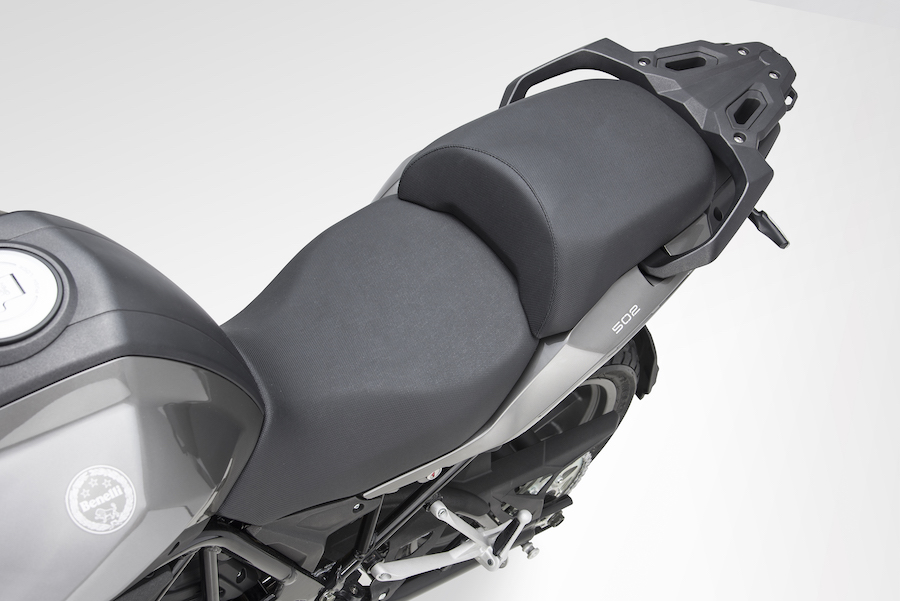 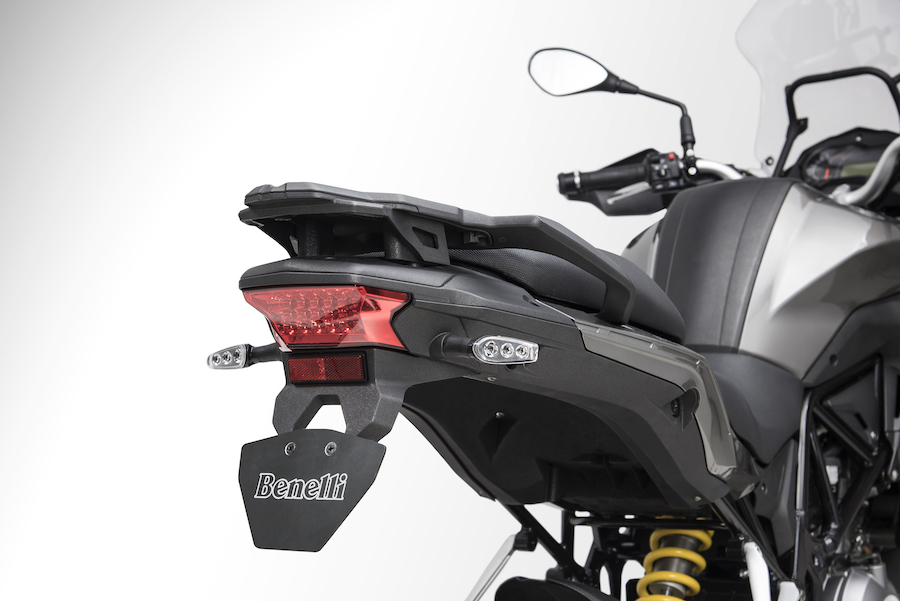 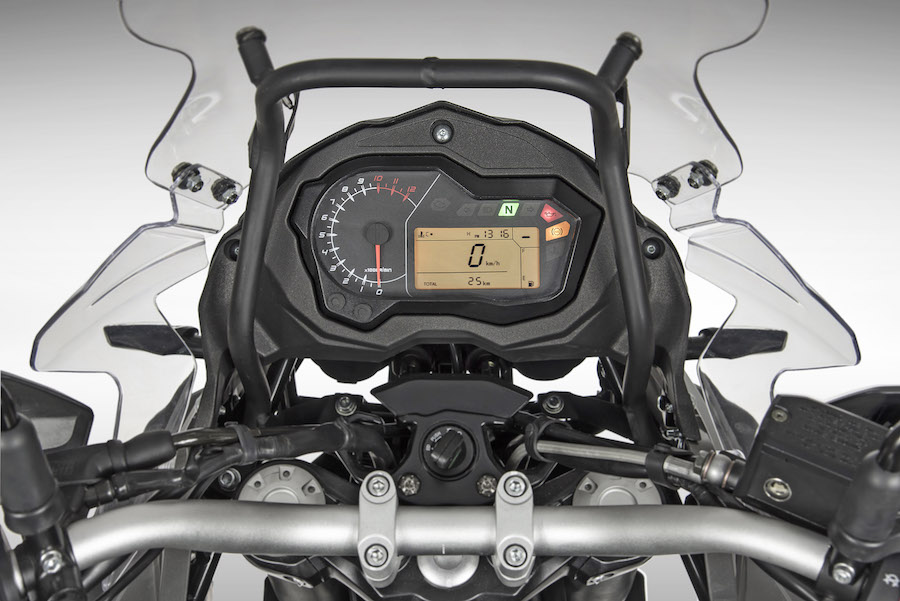 Compare the benelli TRK 502 to its European counterparts and it’s going to come up short – until you compare the price.

For $8790 (ride away), it represents bloody good value. It’s designed as an affordable entry point into the adventure market, with an emphasis on gentle power delivery and a predictable chassis.

The influence of the Italian styling and design is evident; paint finish is great,and there’s been a notable improvement in the bodywork and switchgear from the Chinese-based production facility over recent years.

The TRK 502 looks and rides like a more expensive machine. How this quality will endure is yet to be seen (though we’ve just bagged a long-termer, so stay tuned), but at this early stage it appears the gap between Chinese and Japanese, and even Europeans, is closing.