There was another great MotoGP race at Termas de Rio Hondo on Sunday. Tense and closely fought right up to the final stages, with a crucial and thrilling overtake by the darling of the crowd Valentino Rossi towards the end of the final lap.

Unfortunately for the great man’s hopes of another victory to his name, it was for second place – still the Monster Yamaha man’s first podium since Germany last year, achieved exactly 23 years to the day since his GP debut.

But by then, in fact from the very first corner, pole starter Marc Marquez and his orange Repsol Honda had long gone. In what the defending champion described as “a perfect weekend”, without even a single trade-mark low-side crash and marred only by a chain jumping off the sprocket in FP4, he took the championship lead in utterly dominant style.

Marquez was even able to slacken off at the end and still win by 9.8 seconds, his largest-ever dry-weather margin, making a nonsense of the claims of the closest-ever season. “I decided that if I wasn’t leading at the first corner [because of the Ducati hole-shot launch system] I would wait and save the tyres. But I was leading, and I knew my strong point was the first five laps … so I pushed and pushed, and I saw the difference. Then I was able to manage the tyres and manage the bike to the end.”

Fears of another weather-hit race after dire forecasts came to naught, with the sun breaking through for the last race of the day, in front of a passionate crowd from far and wide in South America, most of whom seemed to have been partying non-stop all weekend at the far-flung venue in the north-east of Argentina.

For the rest of the gang, it was another close fight. At half-distance of the 25-lap, 120.15-km race, from Rossi in second to Fabio Quartararo (Petronas Yamaha) in tenth was covered by barely five seconds. Attrition had spread them out somewhat by the end, but there was still hand-to-hand combat all the way down the points.

The Ducatis of factory rider Andrea Dovizioso and satellite teamster Jack Miller had chased Marquez into the first corner, but by the end of the lap Rossi had slipped into second, using the Yamaha’s better corner speed in the latter part of the interesting 4.805-km Termas lap.

He and Dovi would be close for the rest of the race, changing places now and again until on lap 14 Dovi used his extra horsepower to take control of second place. It stayed that way until more than halfway round the final lap. “I was managing the tyres,” said Dovi; “but unfortunately Valentino had the chance to study me.”

The Yamaha had stayed ultra-close in spite of the speed deficit, waiting for the closing stages. “I was able to stay with him,” said Rossi. “But to passs Dovi, you have to be very price. There were two or three points where I was quicker than him, and I had a better entry to turn seven, and I was able to overtake, without the Dovi last-lap crossing! It is always exciting to overtake on the last lap.”

Dovi had to be content with third, taking as consolation that it was better than he’d expected at a track where the Ducati has hitherto not been at its best.

Fellow front-row starter Maverick Vinales (Monster Yamaha) had another difficult race, slow away and back to eighth by the end of lap two.

It was left to Miller (Pramac Ducati), Franco Morbidelli (Petronas Yamaha) and Danilo Petrucci (Mission Winnow Ducati) to battle for fourth, with fortunes changing frequently. Then soon after half distance they were joined by Alex Rins’s Ecstar Suzuki, after a remarkable ride up from the sixth row of the grid, after missing out badly in qualifying.

Rins was gaining speed as the laps wore on, and was up to fourth with three laps to go. But Miller was the strongest, and now he proved the point. “There were very intense battles with Petrux, Morbidelli and those guys – enjoyable, but it cost me a little bit of time. My strategy was always to save the tyres for the end, which I did quite well … I could pass the other guys and Rins, and I was catching Dovi and Valentino – but it had taken too many laps.”

Rins was just four tenths adrift in fifth, rueing his poor starting position and better than a second clear of Petrucci. But the Italian had been relieved of growing pressure from Vinales, once again gaining speed in the latter stages and pressing hard after overtaking Morbidelli on lap 23. On the last lap, the pair collided and crashed out together.

This gave a handy seventh to Takaaki Nakagami (LCR Honda) … he had succumbed to Vinales on lap 20, and lost touch with the gang.

Three seconds back, Quartararo was eighth; and four seconds behind him Aleix Espargaro prevailed on the final lap after a long battle with his brother Pol and class rookie Miguel Oliveira (both Red Bull KTM).

Jorge Lorenzo (Repsol Honda) had another downbeat weekend, qualifying 12th but finishing the first lap second from last after bogging down off the line, narrowly escaping being hit from behind by Hafizh Syahrin’s KTM. He gradually moved forward, and the last-lap crash promoted him to 12th.

Last year’s winner Cal Crutchlow (LCR Honda) had been tipped as a podium contender after qualifying on row two, but he was judged to have jumped the start and hit with a ride-through penalty. He was furious, for the offence was so minor and the punishment so severe; and charged through to salvage three points for 13th.

Marquez’s text-book performance gave him the championship lead as the circus looks towards the next race at COTA in Texas, a circuit where he has been utterly dominant throughout. He has 45 points to Dovi’s 41; then Rossi (31), Rins (24) and Petrucci (20). 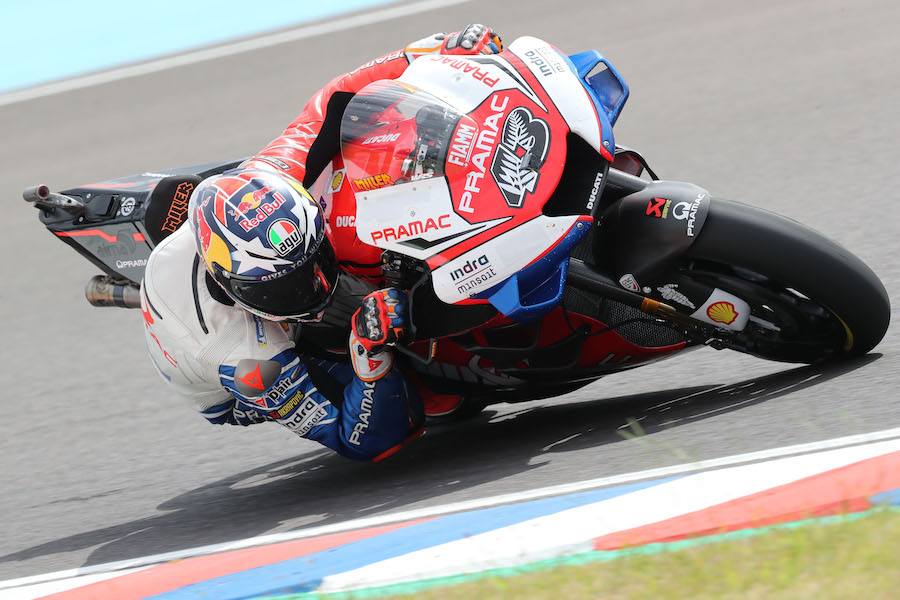 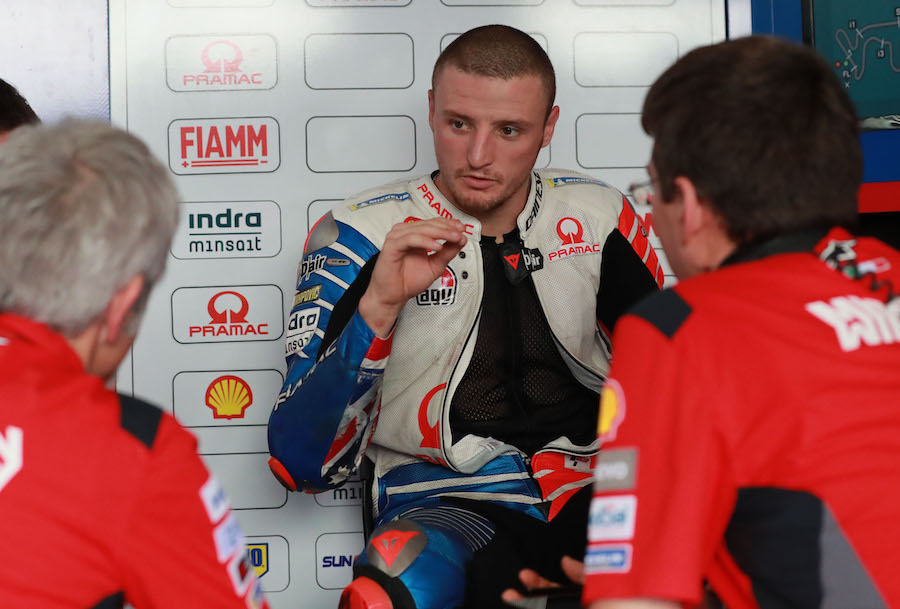 Lorenzo Baldassarri made it two in a row in a thrilling Moto2 race, after a front-end fight of changing fortunes and fierce fighting, in the second race of the new Triumph-powered era, on a day when son-of-a-champion Remy Gardner joined the small number of father-and-son podium finishers with a hard-fought second place.

Flex-Box HP40 rider Baldassarri led a trio of Kalexes over the line after patiently waiting in fourth place until there were just four laps to go to take the lead.

He picked his way through a battling trio –Gardner, Marcel Schrotter and Alex Marquez. A collision under braking with his last victim, Gardner, gave him some breathing space, and he rapidly escaped, to win by better than a second.

The scrap he left behind was far from over. It was won in super-aggressive style by Gardner (ONEXOX Kalex), sweet revenge for his narrow defeat for a podium slot at Qatar by Dynavolt Kalex rider Schrotter.       By the end of the barging match, erstwhile leader Schrotter was banged back to sixth.

Typically Gardner castigated himself for not having come first. “I could have won it,” he said, if his tactics had been a little less bull-headed.

The last podium position went to Marquez (EG-VDS Kalex), after dropping to fifth mid-race. But pre-race mechanical problems for his team-mate Xavier Vierge, who had qualified on pole, left some concerns about reliability as the new engines get bedded in. Heart-rendingly, Vierge stopped with a suspected electrical problem on the warm-up lap. Simone Corsi and rookie Nicolo Bulega both also retired from the top ten with mechanical problems.

Schrotter had led away, but Gardner seized the lead on the second lap, and held it, but for four mid-race laps when Schrotter got back over the line. It was close, however, with positions changing elsewhere on the track, and Marquez also involved, and up to second from laps eight to 13.

Gardner was determined, however. “Every time someone passed me, I said: ‘No!’ And passed them straight back,” he said later.

Then Baldassarri started to gain speed. “At the beginning I had trouble controlling the front, but when the tyre went down it was easier,” he explained.

He picked off Marquez on lap 15, and Schrotter one lap later. Then he shadowed Gardner until lap 20. At the end of the long straight, he drafted past to take the inside line. Gardner fought straight back, but the effort pushed him wide, and let the Italian escape. “Balda touched me. I’m not complaining, but I should have been a bit smarter with the tactics, and given him a bit more room,” he said.

As it was, he lost touch, for this error let Schrotter through once more. But Gardner was having none of it, and his attack pushed the German onto the dirty part of the track, dropping him behind Marquez and in line for yet another barging assault by Brad Binder (Red Bull KTM), who had been chasing valiantly throughout. This lost Schrotter another three places as again he came off worst.

In the confusion, Iker Lecuona (American Racing KTM) secured fourth, a couple of seconds clear by the end of Binder. Schrotter was a tenth adrift, having got back ahead of Luca Marini (SKY VR46 Kalex) on the final lap.

A similar distance behind; and three seconds away eighth-placed Jorge Navarro (Beta Speed Up) led rookies Enea Bastianini’s (Italtrans Kalex) and a distant Somkiat Chantra (Idemitsu Kalex), an excellent tenth in the 20-year-old Thai rider’s second Moto2 race, and only his third GP.

Andrea Locatelli (Italtrans Kalex) prevailed in a close battle for the last points, over Tetsuta Nagashima (ONEXOX Kalex) and Khairul Idham Pawi (Petronas Kalex). Domi Aegerter (MV Agusta) tumbled out of this fight on the last lap, leaving 14th and 15th to a distant Bo Bendsneyder and Jesko Raffin (both NTS), with rookie A long straight and a narrow racing line combined to make a desperately close Moto3 race, with a brilliantly tactical win for first-time pole qualifier Jaume Masia (Bester Capital KTM) after no less than 12 different leaders over the line, and a pack still 17 strong covered by less than 2.4 seconds over the line.

The Spanish teenager had played an unobtrusive part in the all-action pack, dropping to as low as 13th mid-race. But he arrived at the front with perfect timing. Starting the last lap fifth, he picked his way to the front, and managed to resist a last-corner attack by a blazingly on-form Darryn Binder (Green Power KTM), through from 20th on the grid.

It was the 18-year-old’s first podium, as he starts a second full season after injuries blighted the end of his first. “Thanks to all who supported to me in the difficult times,” he said, in an emotional parc-ferme.

Binder was more matter of fact. “I got squashed out a bit in the last corner, and I only managed to pass one of them, not both. But … next race!” The younger brother of former Moto3 champion Brad led for the first time on lap nine after forging through from the seventh. The Hondas were visibly faster down the straight, but his late braking at the end of it was a high point of an exciting race.

There was disappointment also for erstwhile leader Lorenzo Dalla Porta (Leopard Honda) who fell foul of Binder at the end of the back straight on the last lap, and dropped to seventh. Others on the down side included erstwhile leader John McPhee (Petronas Honda), who collided and took out EG Honda’s Alonso Lopez while battling to stay in the gang with rear brake problems, and pointless Romano Fenati (Snipers Honda), whose gamble on a soft rear tyre played him foul.