With a freshly broken bone in his wrist, Australia’s Toby Price battled pain and the world’s best riders to win the ultimate off-road prize

Had he not broken his scaphoid in training, Toby Price may have been a short-priced favourite to win his second Dakar Rally. However, tormented by throbbing pain and his injured throttle wrist in a restrictive splint, the cliché ‘take every day as it comes’ has never been more apt. Toby did exactly that. Absorbing the pain each evening – and waking with a ready smile of encouragement for the team each new dawn – he persevered. Then, on the final day, with a 62-second lead, and gridded up behind his only remaining rival, Toby’s second Dakar crown was looking likely. Held entirely in the southwest corner of Peru, the ad-hoc format of seemingly endless loops around the coastal sand mountains of the Desierto Atacama and foothills of the Andes mountain range, the 41st Dakar was truly like no other; while each day was like the last. Groundhog day in the sandpit.

To provide additional excitement – not to mention danger – the Amuary Sport Organisation created variety by using motocross starts, mixing the motos with the autos and, on the final day, a reverse start. Yet much of the traditional Dakar mystique was missing. Let’s face it, Paris to Dakar, Marseille to Sharm El Sheikh and La Paz to Buenos Aires sound more exotic than Pisco to Pisco. Little wonder ASO Director Etienne Levigne is talking up a return to Africa; notably Algeria, Angola and Namibia. Yet the challenges in Peru presented no less a struggle than past editions, with the attrition rate among the motos only one rider shy of 50 percent. And it’s a safe bet to say the machinery proved considerably more resilient than the riders. At the pointy end, seven different riders and five different marques took stage honours, with only Walkner and Sunderland scoring doubles. The ultimate victory was anyone’s until the final day when Toby Price scored his only stage win and his second Dakar crown; finishing nine minutes ahead of Walkner and 13 minutes ahead of Sunderland to present KTM with the trifecta and its 18th consecutive Dakar Rally victory.

But while the raw statistics may appear preordained, the event was determined by how the competition failed as much as what KTM did to succeed. Here’s how it all unfolded. With a three-hour trail ride followed by an 84km prologue, none of the top 10 contenders wanted to bust a gut; or their bikes. And, depending on who was telling the story, none wanted to win the prologue and have the obligation of opening the piste the following day. No one really had a plan for an event that defies planning; particularly in the new five-plus-five format.

It’s doubtful that Joan Barreda Bort laid it all on the line to take his 23rd Dakar stage win, but take it he did. And has now accumulated sufficient stage wins to have previously won two Dakars. In fact Barreda may well have won in 2017 before the Honda team was penalised for an illegal refuel. Then, while in a commanding position in 2018, he was forced to retire with a dislocated knee. Now he’d demonstrated he was still the quickest in Team Red. Or, as some said, ready to win it or bin it.

All of the usual suspects made the top 10; Pablo Quintanilla on Husqvarna; Ricky Brabec on Honda; Adrien Van Beveren on Yamaha; Sam Sunderland, Toby Price and Matthias Walkner on KTM; Kevin Benavides on Honda and Xavier De Soultrait on Yamaha. This year they were joined by Jose Ignacio Cornejo Florimo – ‘Nacho’ to his mates – on Honda.

After the first stage, less than six minutes covered the top 10 and, while there were 139 additional motorcycles, a hundred autos and scores of quads, side-by-sides and trucks, each rider knew that one of their numbers would be the first to return to Lima in triumph. Less than halfway into the 331km Stage 3, Barreda Bort had just taken point duty from Matthias Walkner when the pair were engulfed by La Garua – the voluminous marine fog that regularly blankets the base of the Andes Mountains. With visibility down to less than three metres, Barreda punted his Honda over the edge of an escarpment. And was almost followed by Walkner who, with the sudden disappearance of Barreda, only just managed to avert disaster. But it was too late for the Honda rider as the slightest movement only caused his bike to slide further down the rocky scree. Barreda’s only option was to go with the flow in the possibility of finding an escape route down lower. But the chasm became a canyon from which, several hours later, he was choppered out from the gloom.

Meantime Matthias Walkner, Ricky Brabec and Toby Price all became disoriented in the fog while Xavier de Soultrait managed to take his first stage win and Pablo Quintanilla rode on to an early overall lead of 11 minutes. Bulldust, or fesh-fesh as it’s known by Dakar competitors, is only incapacitating when taken internally. As fine as talcum powder, it can destroy a highly tuned powerplant instantly or, if ingested over time, will completely block the airbox and strangle the power. It’s best avoided, but when a bike is buried to the hubs the only way out is to give it full gas, look at the horizon and hope for the best.

But an even bigger danger to life and limb are the rocks which lurk beneath the fesh fesh. These are what brought Toby Price undone in his 2017 title defence and almost paralysed Sam Sunderland in 2018. This year it was Paulo ‘Speedy’ Gonçalves who hit a rock at the 155km mark and went down and out. Sam Sunderland stopped to assist, though Gonçalves, with no feeling in his right arm and now wearing a neck brace, was medivacced out with compressed vertebrae.

Sunderland, who was riding to a strategy known only to himself – and possibly Team Manager Jordi Viladoms – was rightly awarded compassionate time for his assistance, which made him the Stage 5 winner, something he wasn’t particularly pleased about as it meant opening proceedings following the rest day. This incident also elevated Ricky Brabec – who had comprehensively won the previous day’s 405km marathon stage – to the overall lead, considerably buoying the American’s (and the Japanese’s) victory hopes. Following the rest day and after an intense four-hour duel with Pablo Quintanilla, leading Honda rider Ricky Brabec had enthusiastically (and somewhat prematurely) announced the Dakar was now down to a head-to-head between himself and the Chilean Husqvarna rider.

Lady luck had other ideas and after 57km in to Stage 8, his Honda stopped. Dead. Never to go again. Considering that exactly the same catastrophe had befallen the outspoken American when, in an almost identical position last year, Brabec took the blow-up stoically and rolled with the punches. Well, while the cameras were rolling at least. Thus, once again, ending Honda’s last hope of a podium, though Jose Ignacio Cornejo Florimo completed the Dakar with a pair of flyers; finishing the last stage right behind Price. 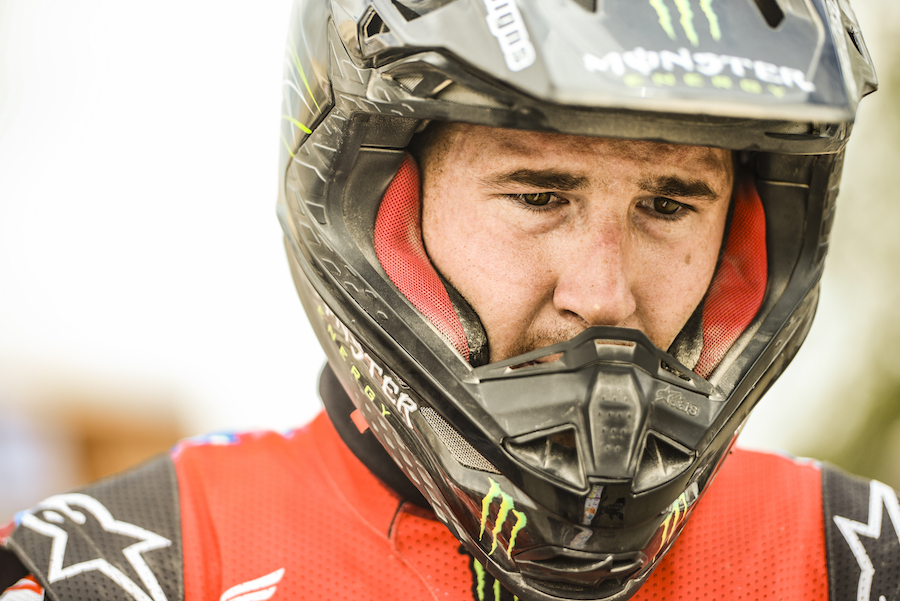 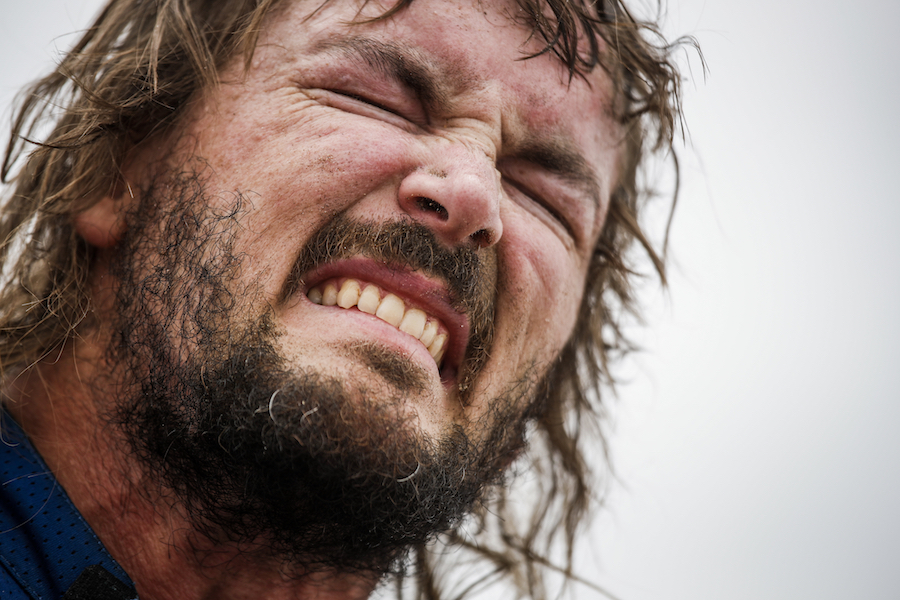 As always, Quintanilla remained the biggest threat to KTM’s dominance (same bike, different skin, after all), but Van Beveren was still demonstrating both he and his Yamaha were on the pace. That’s until, with less than 30km of the 313km penultimate stage left to run, his Yamaha expired; a faulty thermostat had allowed the engine to overheat. Other rumours were that the gearbox had packed up and/or all the oil had boiled. Like Ricky Brabec’s problem the previous day, the official statement admitted to a minor technical issue. Experienced adventurers know, a minor technical issue doesn’t relegate your bike to the back of a ute. This was a major problem.

A distraught Van Beveren was a pitiful sight, but he’s got a few years left in him yet. It remains to be seen how serious Yamaha is, as they’ve already proven their staying power on a considerably smaller budget than their Japanese rival. Price gained a small advantage when the ASO decided to run the final stage in reverse order. Knowing he had fractions more than a minute lead over Quintanilla, the Aussie was aware that if he could catch sight of the Husqvarna, and stay there, the Dakar crown was his.

With a target on his back, Quintanilla had to give it everything he had and more, hoping the injured Price couldn’t match his pace. And in what was a typical understatement said, “because if you want to win the Dakar you do need to take some risks.”

A single broken dune proved one risk too many for the unfortunate Chilean who crashed heavily just 10km into the final stage, breaking his foot. And while he got mobile again, he conceded not only victory but an almost certain podium place to Price’s KTM teammates Walkner and Sunderland. 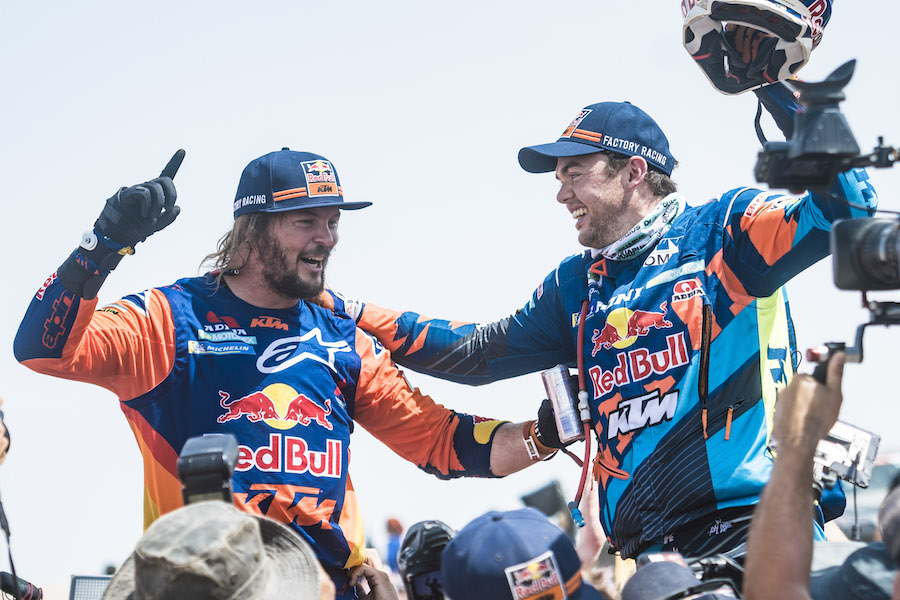 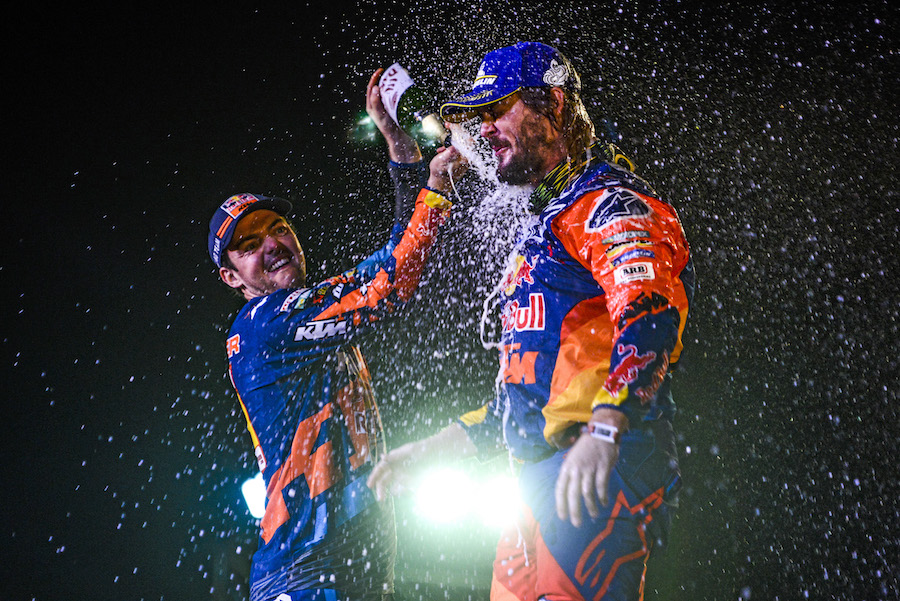 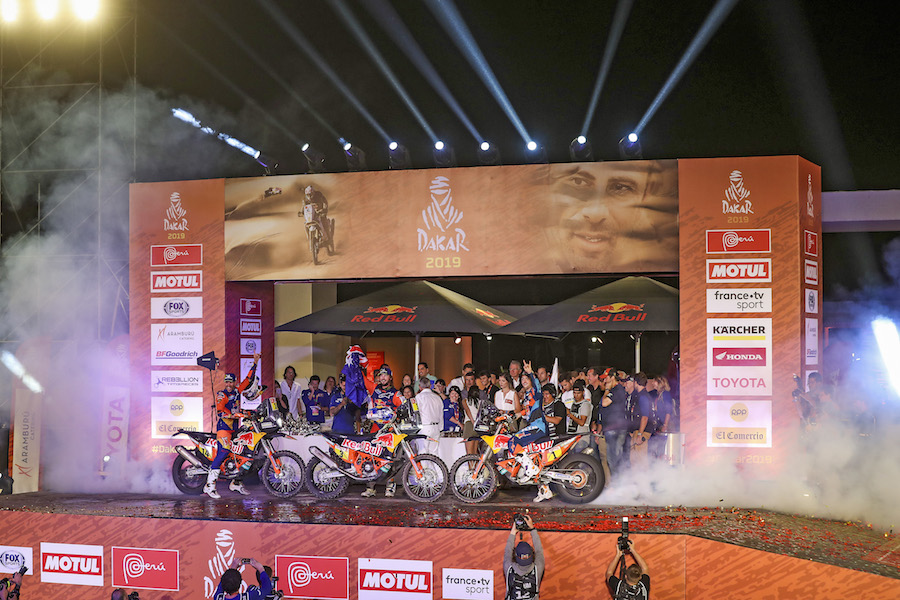