If I told you I can pull a decent wheelie on just about any motorcycle, I’d be lying. And if I told you I’m not secretly jealous of the very many of my peers who can, I’d also be lying. But the bit that has always stopped me from learning is, well, exactly that. Because a successful learning process involves spectacularly unsuccessful failures. And they’re the type of failures I’m not one bit interested in graduating from. 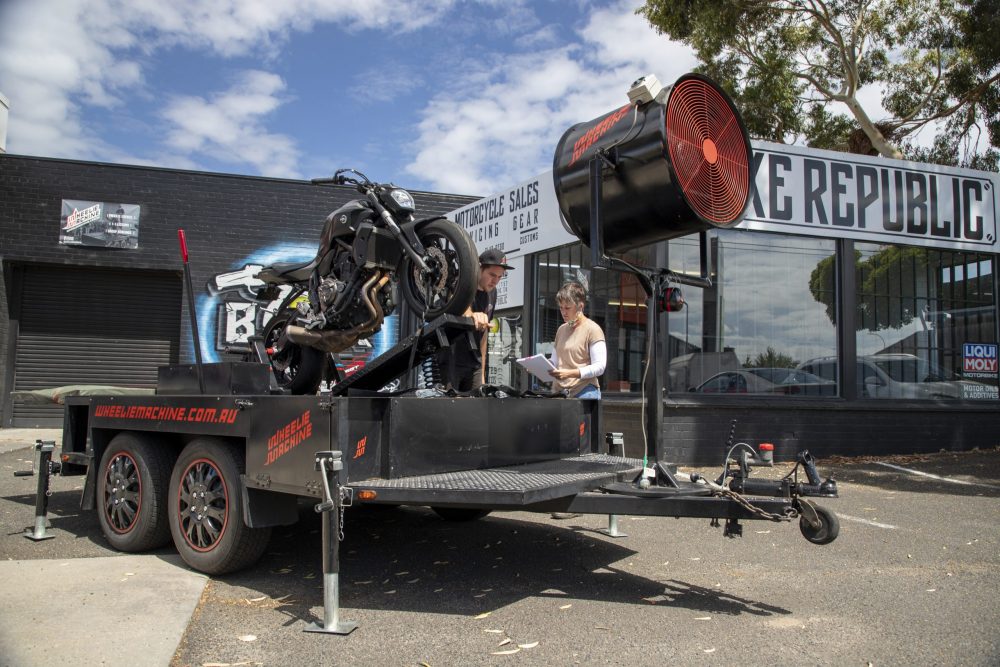 You see, my brain understands the forces and physics behind doing a wheelie, but when it comes to switching off my keen sense of self-preservation and physically executing a wheelie on the road, well that’s something else entirely.

That’s where Taras Cheprakov and his self-engineered Wheelie Machine comes in. A 25-year-old mechanical engineer who designed and built the machine to not only help the likes of me gain confidence in a thoroughly controlled environment, but also to provide entertainment to the masses as well as offering a training facility to the pros. 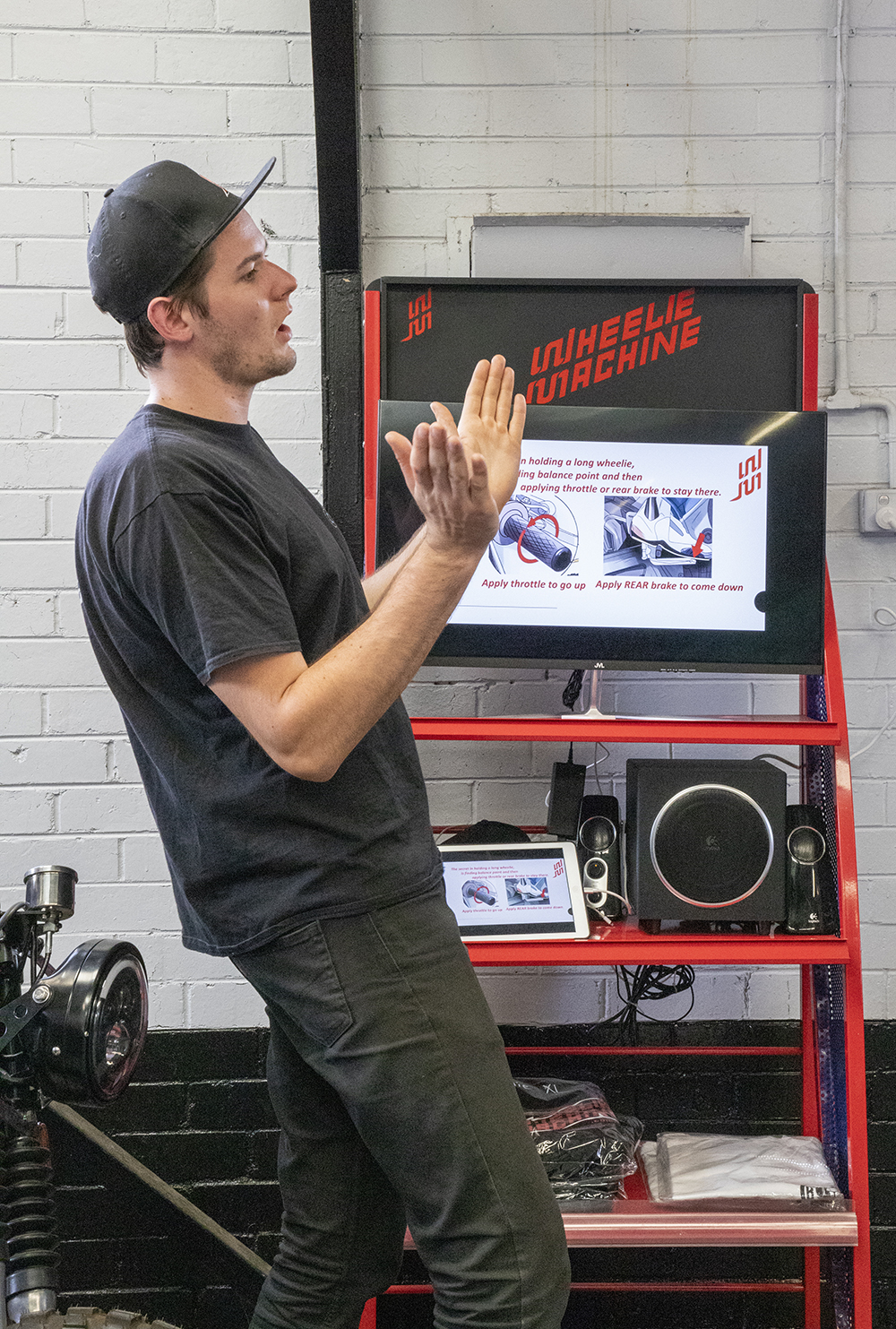 “It took me about a year to design it to get it right, and then my brother and I built it,” he says with an air of justified pride.

Taras’s contraption caters to a range of skills levels, whether you’ve never done a wheelie and want to feel what it’s like when the front end of a motorcycle goes weightless through to experienced wheelie pullers who want to finesse or lengthen the time spent at balance point.

And in Taras’s mind, finding the balance point of a wheelie and understanding how to keep it there using your body position, throttle control and your rear brake is the key to a spectacularly successful wheelie. 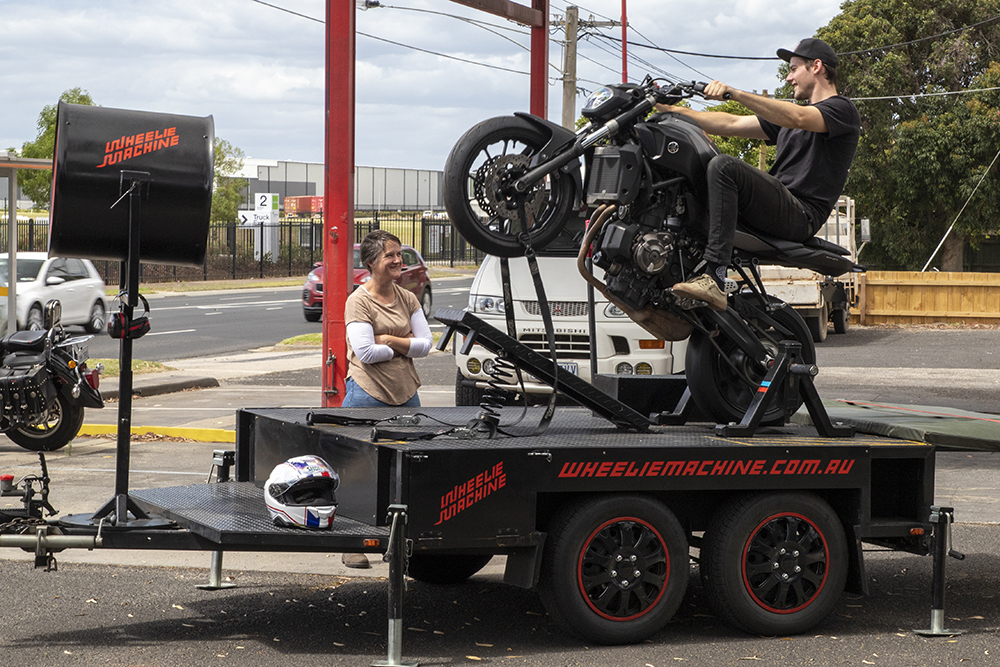 After my 15-minute briefing where Taras gets an understanding of where I’m at and what I want to get out of the session, I’m played an instructional video which explains in a clear and concise way the hows and whys of achieving a successful wheelstand. Hilariously, and somewhat awkwardly, it turns out Taras shows all of his students an AMCN-produced video he found on our YouTube channel, conceding: “It’s actually the best video I can find and it explains it almost perfectly.” 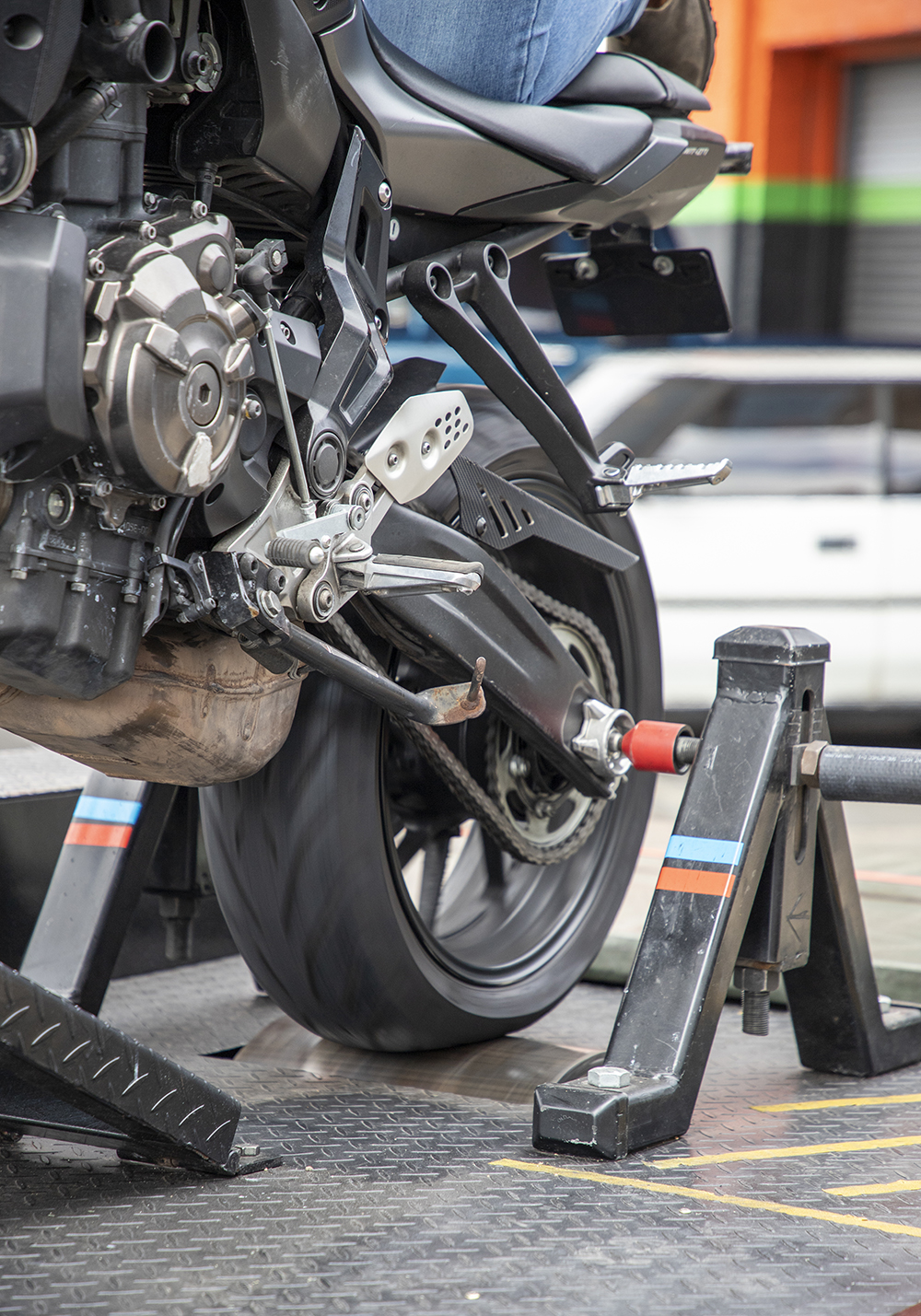 His insurance stipulates that I need a helmet and closed-toe shoes and I’m also opting to wear gloves, too, because that’s what I’m used to wearing every time I jump on a bike.

We head outside to where the unit is parked, which is a heavily modified trailer complete with a Yamaha MT-07 fitted and ready for action. 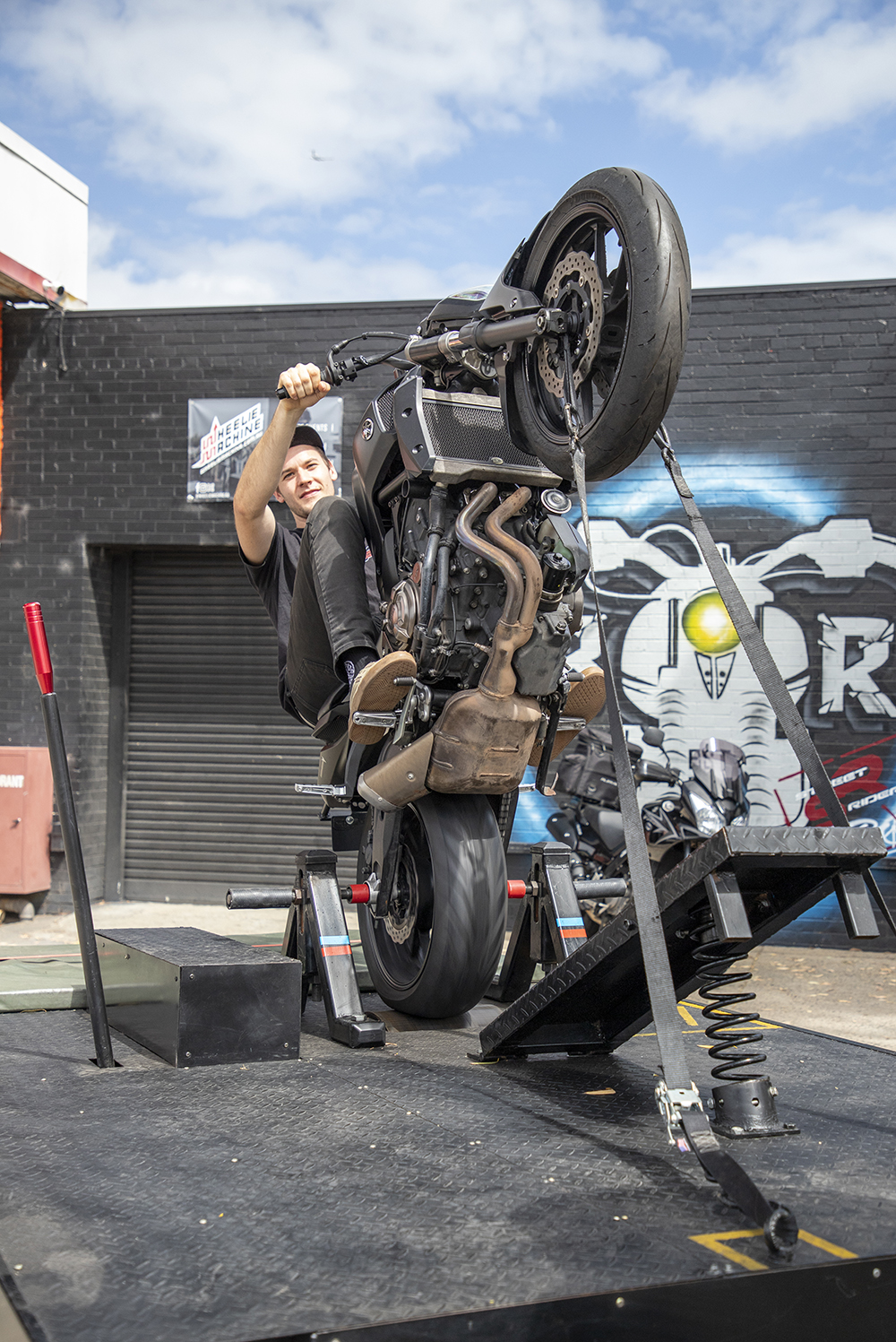 The bike’s already up on an angle, thanks to a spring mounted under the front wheel, which Taras says is there for two reasons; firstly to help you get the bike up and onto the balance point and also to reduce forces transferred back through the bike when the front wheel inevitably comes crashing back down to where it started as people get the hang of things. The rear tyre, which has lower pressures than you’d run on your roadbike to increase traction, is resting on a roller, much like the drum used on a dyno, but a lot bigger.

“So it’s actually quite hard to get it up to speed,” explains Taras. “Advanced dynos have variable load, but that gets very expensive to be able to adjust it – we’ve got a fixed load for what it needs to be for a motorcycle between 600 and 750cc, roughly speaking, and within that range it feels pretty realistic. 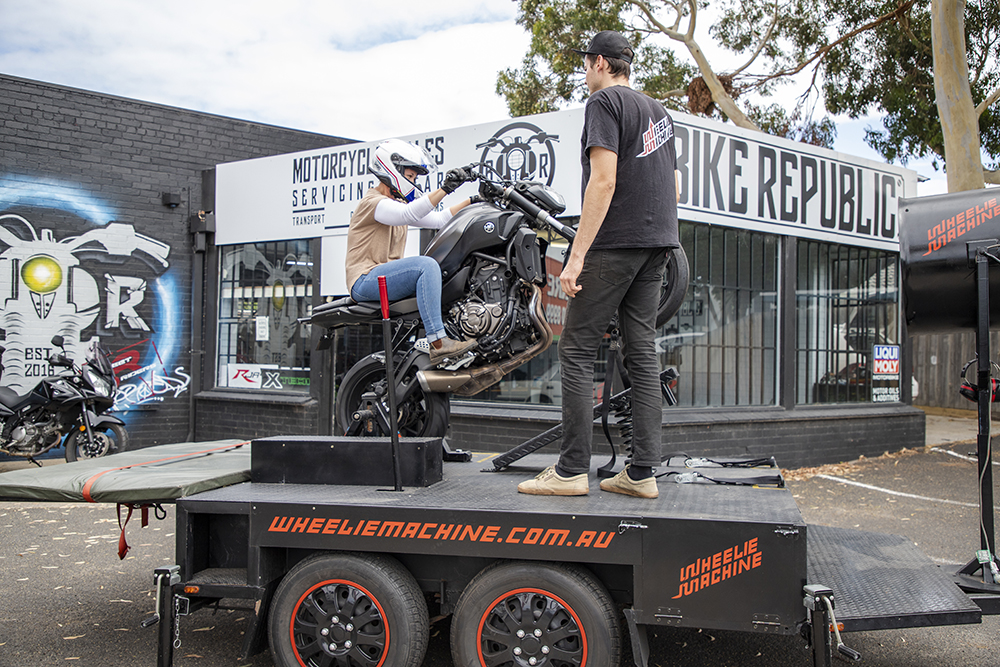 “That’s the whole goal. When you twist the throttle, you don’t want it just revving out and you don’t want it to stall – it needs to feel realistic. And you actually need to ride the clutch a lot at the start to get the roller spinning.”

The large lever is a hand-operated brake for Taras to slow the roller after each attempt at a wheelie, which can have it reaching some pretty decent speeds. On the road you’d be using the front brake as well to wash off speed, so Taras gives the lever a yank to exercise a bit of mechanical sympathy for the little Yamaha.

“We use the rear brake to practice, to help find that balance point, rather than using it to slow down every time. If you think about it, five hours of lessons on a Saturday, if you’re using that rear brake to slow the bike every time, it’s going to overheat.” 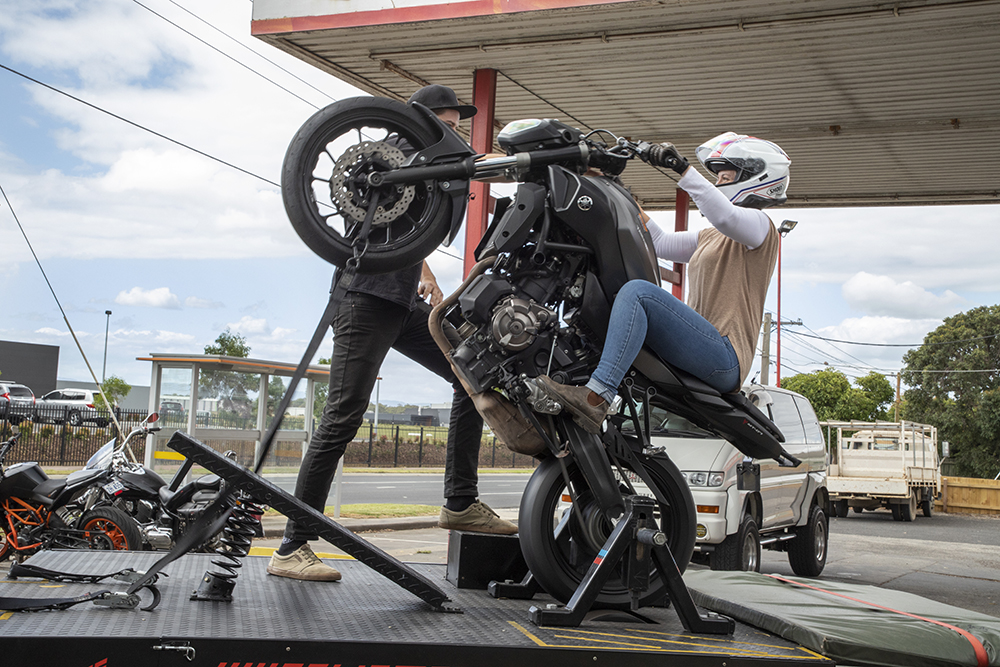 I jump on and feel like I’m on a chopperised version of an MT-07, because of the already high ‘resting’ angle of the bike. It’s more or less a standard MT-07, save for the speedo pickup being moved to the rear wheel, for obvious reasons, and a manual fan switch wired into the high beam switch to keep the bike from overheating.

Once rolling, Taras explains to me the best way to get the bike up and onto its back wheel. From second gear, I need to get the rear wheel speed up to around 30km/h, back off, follow the weight transfer down onto the front wheel with my own body weight and then, just as the fork begins its rebound stroke, snap open the throttle, lean back, and coax the front wheel skyward. 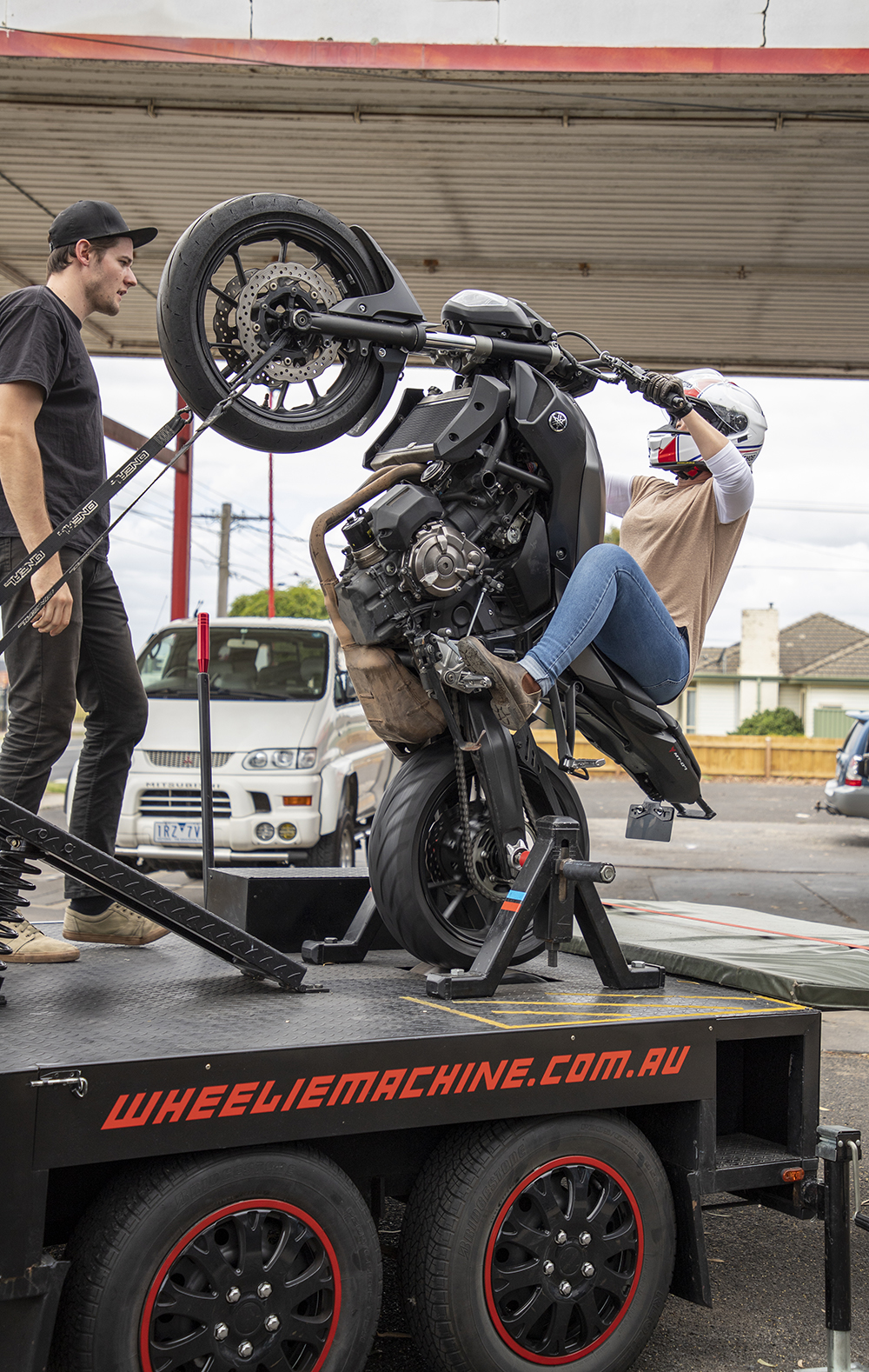 Sounds pretty easy in theory, and the spring under the front wheel certainly aids in getting the bike pointing skyward. And once you get a handle on getting the front wheel into the air, Taras then begins taking you through the steps required to keep it there and that involves body position, first and foremost, throttle control and how and when to use the rear brake.

If you’re anything like me, your instincts will try and push your body forward as the bike starts to come up, and it’ll take you a handful more goes before you can rewire your brain to act against your instincts and lean back. And if you go too far, there’s some strapping between the front of the bike and the front of the trailer which will let you go over the tipping point – there’s those spectacularly unsuccessful failures I was talking about earlier – but not to the point where you can do any harm or damage, of course. 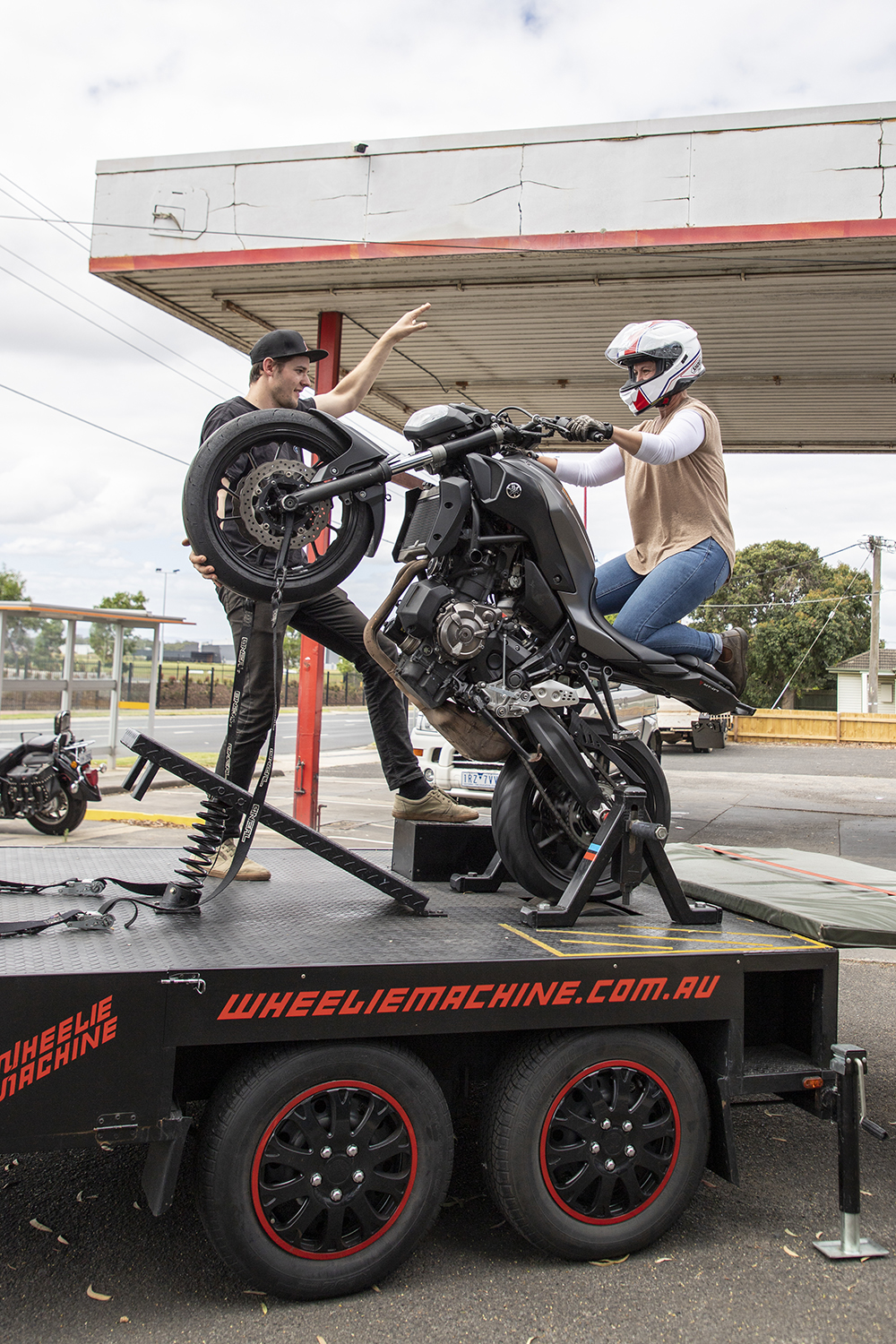 For me – and according to Taras, a lot of other people, too – the biggest surprise was just how far back the balance point actually is. Although, because you’re starting your launch from an angle far higher than anything you’re used to, it’s kind of difficult to judge how far you’ve come up, what angle you’re at once it’s in the air, and how far the bike needs to fall before it’s back down and resting on the spring.

Taras stands alongside you, coaching you through the process, pointing out your right and wrong inputs which are achieving certain outcomes, and it didn’t take too long for me to get the hang of what I needed to do to keep the bike floating on the point between wanting to drop back down towards earth or wanting to loop over backwards, like Alvaro Bautista’s spectacularly unsuccessful victory celebration at Brno in 2009. 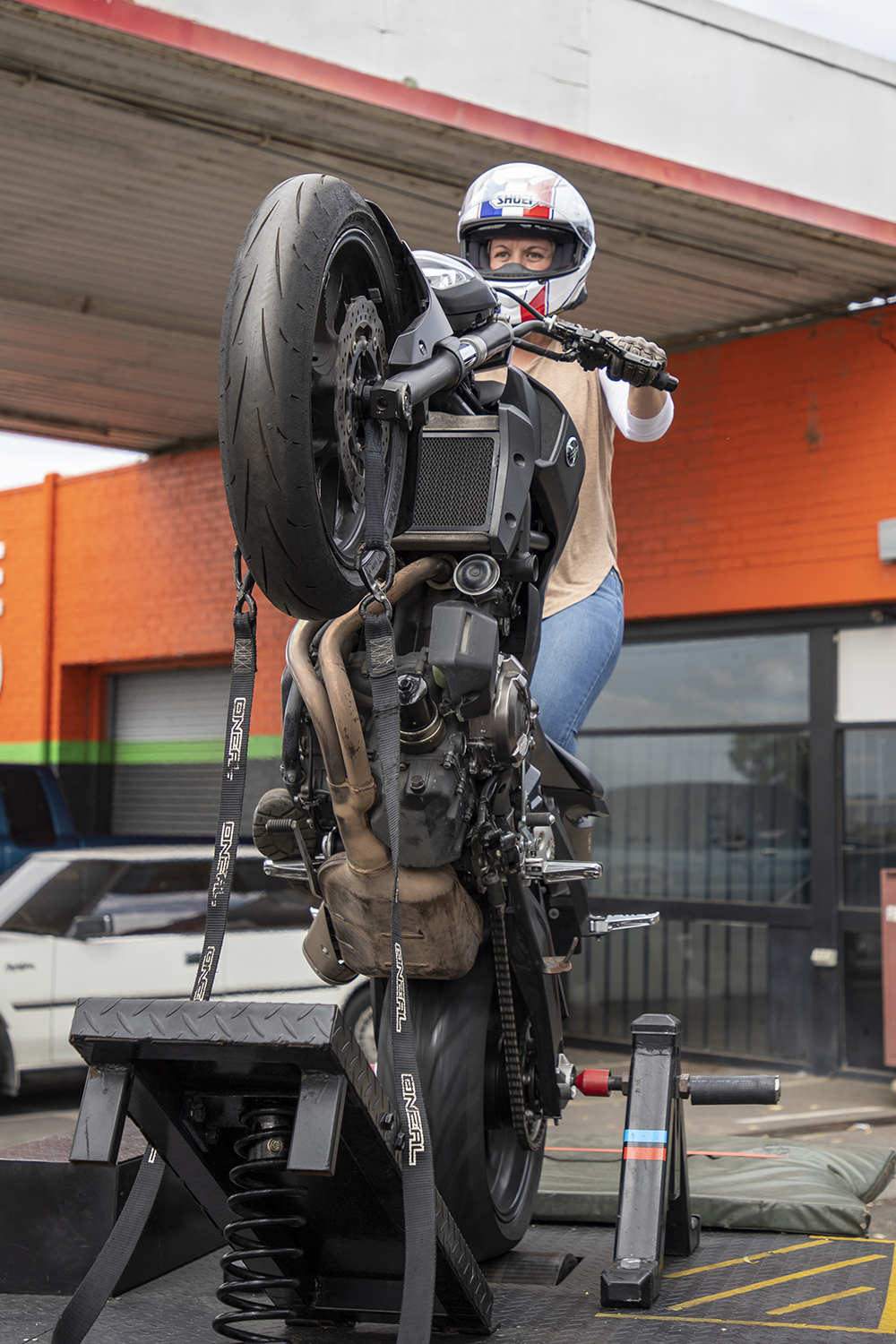 After 30 minutes on the bike, I’m more tired than I thought I’d be. My right forearm feels like it’s been hanging on tighter than it should but I’ve had a ball and I’ve gained an understanding of a wheelie’s balance point – something I would have never otherwise been able to do.

Did I walk away more adept at wheelies than when I arrived? That’s hard to answer, because the bit I find difficult about wheelies is getting the front wheel lifted off the ground from its horizontal position while rolling along, and that’s the bit Taras’ wheelie machine does for you. 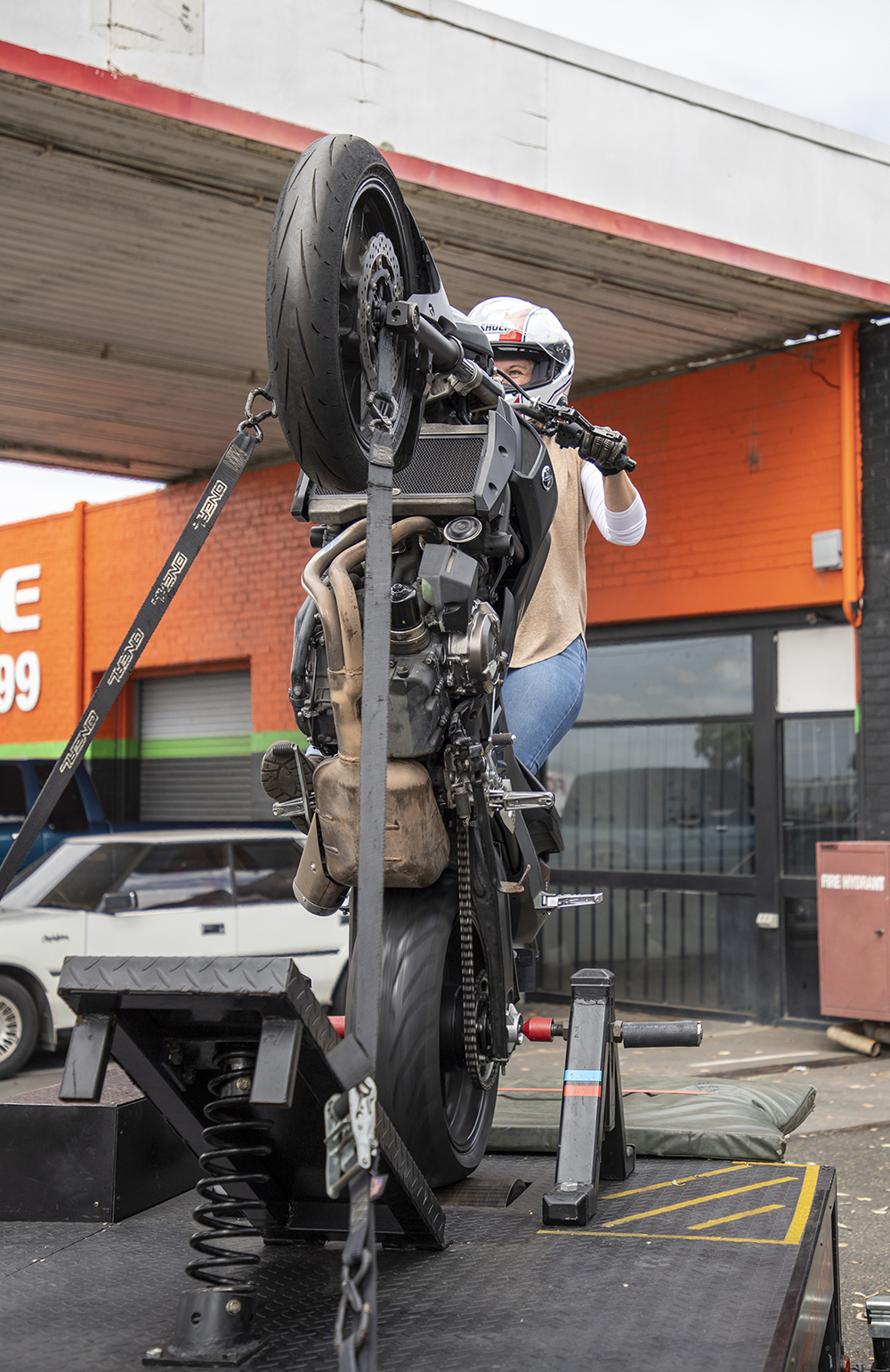 Taras explains that the second session with the machine covers off clutch-up wheelies (or the last 15 minutes of the first session, if you’re a faster learner than me), and I’m sure practicing that process on the wheelie machine would help tick off the pop-up box.

But if and when the day comes where I’ve mastered the initial pop up, I’m now far more confident that I won’t delight onlookers with many spectacular failures.

And that’s well worth the experience.