AMCN has bagged a ‘blind’ track test on a yet unnamed Multistrada V4 prototype which will be revealed to the press and public at the end of this year. With price, weight and specifications still very much under wraps, details are limited to what rider Adam Child could see and feel.

Likely to be dubbed the Pikes Pikes edition, the Multistrada V4 prototype rolls on 17-inch wheels and promises to be the most powerful and sporty Multistrada ever.

The new Panigale-derived Granturismo V4 is certain to have more grunt than the 113kW of the older Pikes Peak’s Testastretta DVT L-twin, with power also expected to eclipse the current Multistrada V4’s 125kw at 10,500. Torque output is expected to be in line with the current V4’s 125Nm at 8750rpm. 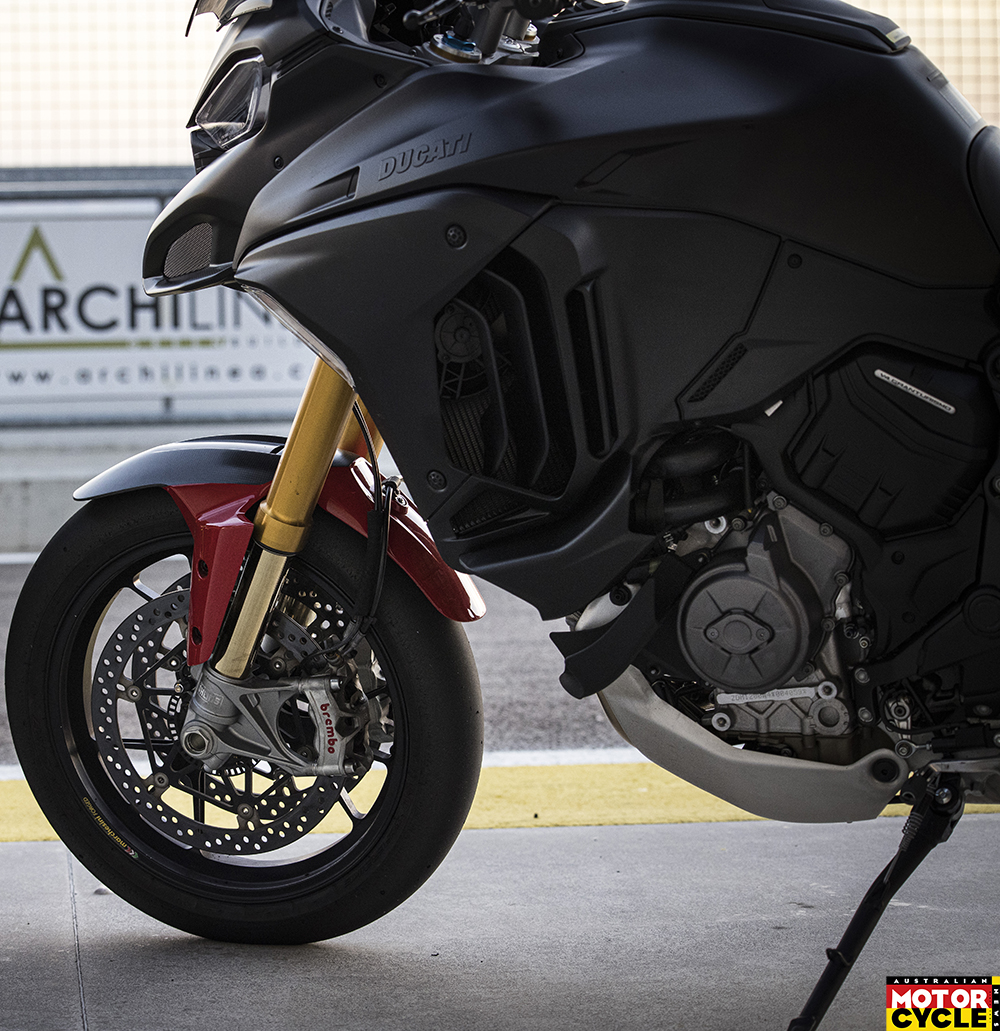 The Pikes Peak model rolls on 17-inch wheels, rather than the off-road friendly 19-inch wheels of the standard Multi, which highlights both its track-focus and new lack of off-road ambition. And to show how serious Ducati is about its sporting intentions, the test bike was fitted with Pirelli SC1 slicks front and rear (120/70×17 front, 200/60×17 rear), for the day of our test.

The older twin-cylinder Pikes Peak ran conventional Öhlins suspension but the new V4 features semi-active Öhlins suspension, front and rear, instead of the electronic Skyhook Marzocchi items found on the 2021 Multi V4S. Ducati wouldn’t confirm their spec,  but they appear similar to those on the Ducati Panigale V4 S. 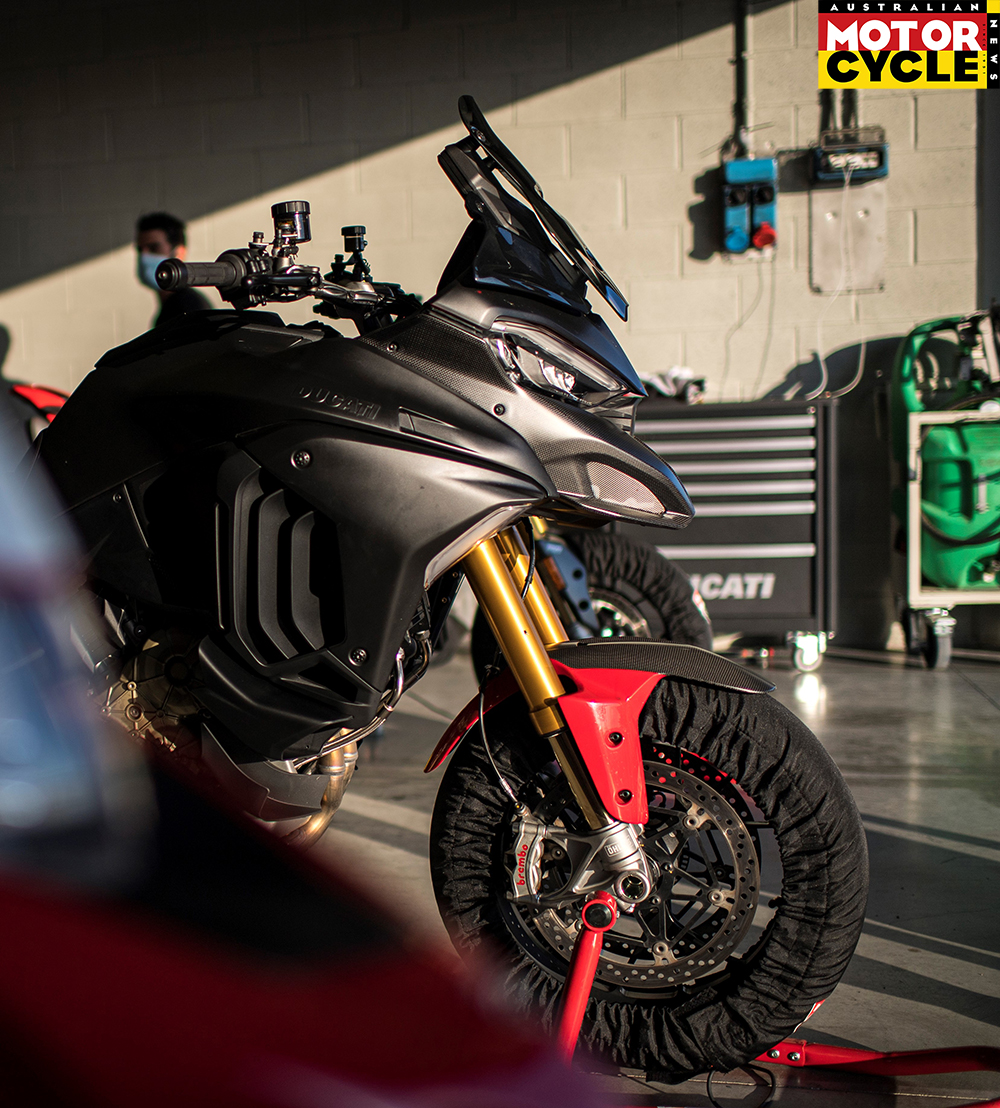 There are four riding modes to choose from: Race, Sport, Touring and Urban. The Race mode has replaced the standard bike’s Enduro mode, as getting dirty isn’t on the Pikes Peak bucket list.

As you’d expect, a plethora of rider aids are linked to these modes, including lean-sensitive traction control and ABS, plus wheelie control. The large TFT dash and switchgear are similar to the standard Multi V4 and highlights the riding mode, rider aids, and the pre-selected suspension set up, even the spring pre-load. There’s also an up and down quickshifter. Obviously, the rider aids will be completely new, with new settings and algorithms to match the new chassis and shorter-travel suspension. Launch control wasn’t discussed or tried, but we can assume cruise control as standard, probably Adaptive Cruise Control first seen on the Multi V4 this year. 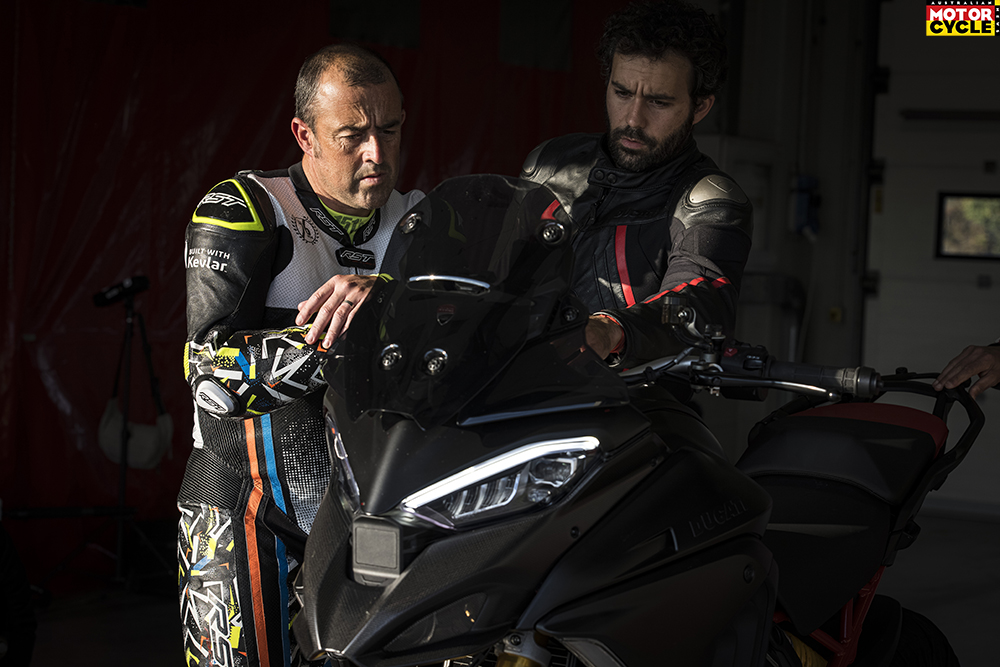 Adam knows the tight and twisty Italian test track like the back of his hand, so lap one is taken to 50 or 60% to scrub in the slicks, then it’s flat out, pushing for a fast lap.

At the end of the straight, towards the top of fifth gear, it’s hard on the radial-mounted Brembo M50 Stylema brakes that appear to be the same as those on the V4 S Multistrada. Stopping power is enormous, while the bike’s stability and control are equally striking. 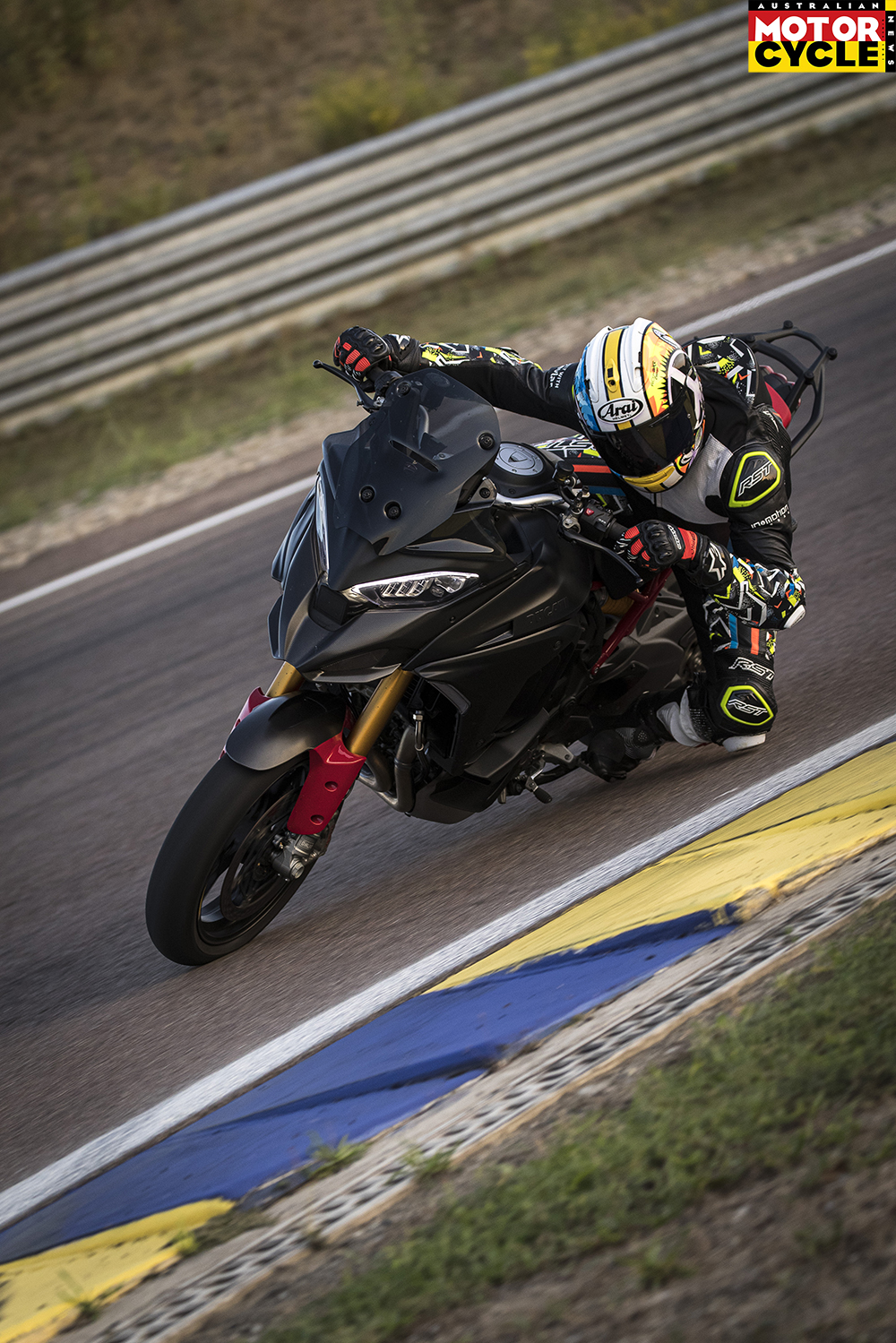 The Pikes Peak is in a different league to the standard Multi V4. Knee-down left to knee-down right is so easy it can’t just be down to the smaller-diameter wheels and we suspect that Ducati has reduced both unsprung weight, overall weight, and moved the centre of mass to sharpen up the steering as it’s ridiculously simple to bang the Pikes Peak from one side to the other. 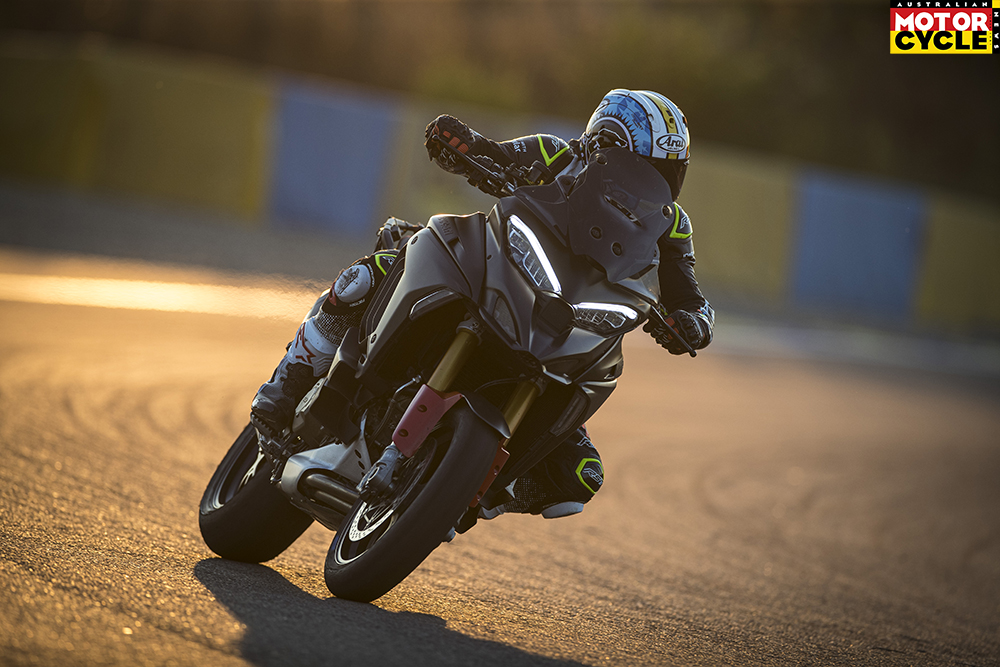 In Sports mode, power isn’t fierce, and torque feels restricted in the first two gears. Driving hard out of the final turn in second gear, it’s quick but not aggressive, yet with throttle 100% pinned, you can feel the rider aids controlling the front wheel lift in second gear.

As you’d expect with Pirelli slicks in perfect conditions, grip isn’t an issue. Ultimately, pegs start to scrape and you begin to run a run wide of corner apexes, signalling the limit for the Sports mode suspension settings (designed for aggressive riding on-road tyres). 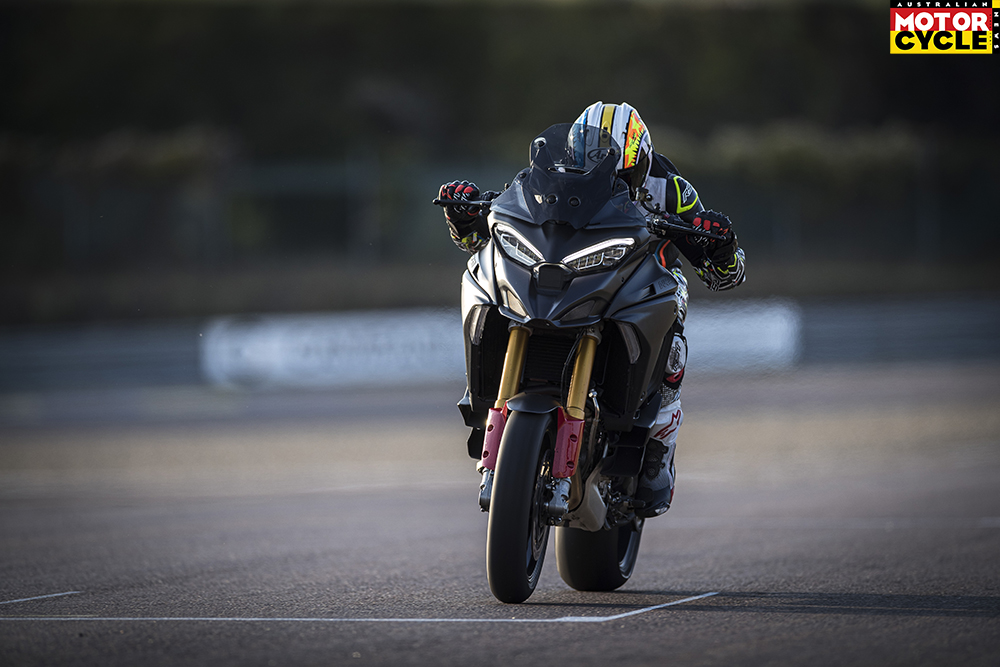 In Race mode, the suspension caters for track riding on grippy tyres. The ride is firmer, the pre-load is up from 16 to 21 and rider aids are also backed off, with the ability to switch them off completely, if desired.

The difference between Race and Sports mode is immediately evident, which highlights the quality of the electronics and semi-active suspension. There is even more control and noticeably less fork travel, with less intrusion from the lean-sensitive ABS. In Sports mode, at race pace with slicks, it would miss the apex slightly, now it’s hitting it every time. At the extreme lean angles that the sticky Pirelli slicks allow, the pegs still touch down, but they’re not buried into the Italian race track as they were previously in Sports mode. 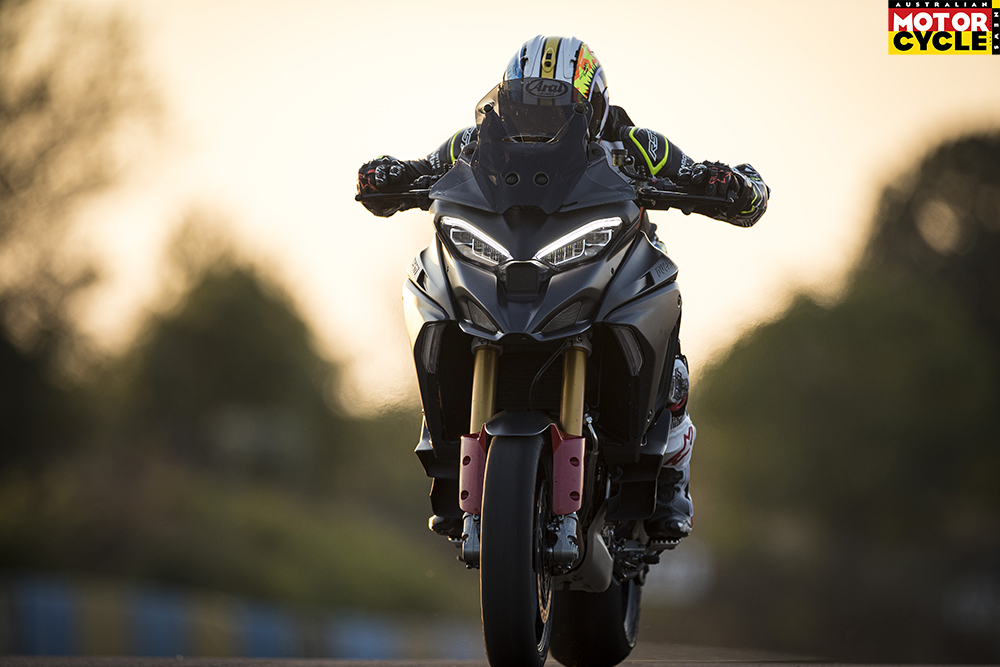 Changes in direction are now electric as the taught chassis allows you to turn quicker and get on the power sooner. In Sports mode, there’s more travel and you have to ‘lift’ the bike over the rear shock, then for a fraction of a second let it settle. Now that transition is much faster, allowing you to get back on the power early.

Power output in Sports and Race mode feel similar, with Race a little sharper at the bottom and with more aggressive throttle mapping. 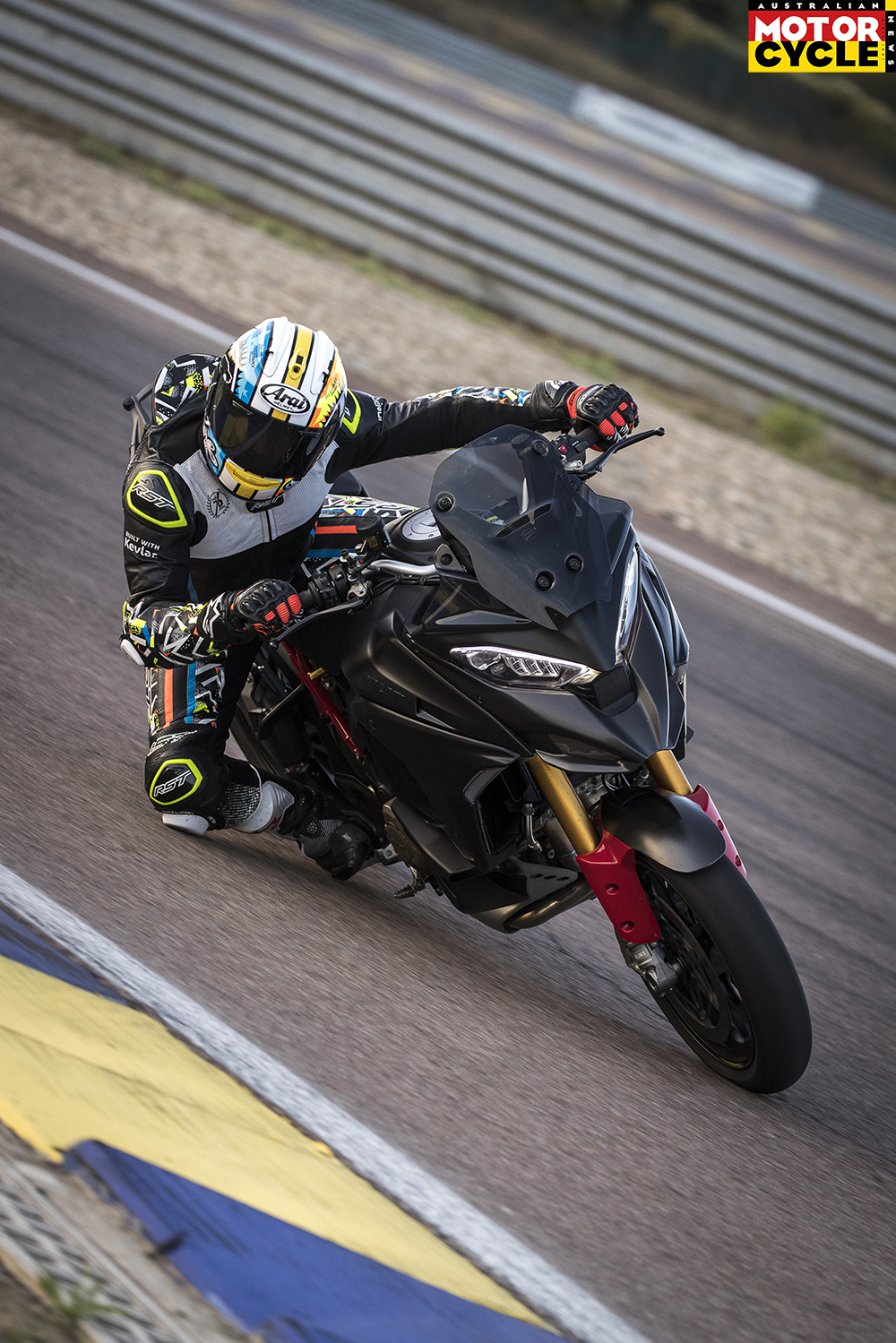 We’ve only got a taste of what the new Multistrada V4 Pikes Peak will be like, there’s no spec-sheet yet because the development team is still putting the final touches on the bike. But we can safely predict it will be the sportiest Multistrada ever.

While pricing is yet to be announced we expect the Pikes Peak to hit showroom floors above the $33,490 ride-away price tag of the Multistrada V4 S.

The old twin-cylinder Pikes Peak was good but essentially a standard Multistrada with a higher specification and accessories. For 2022, the new Pikes Peak will be radically different to its stablemate with an all-new track focus – and we can’t wait to ride the finished version. 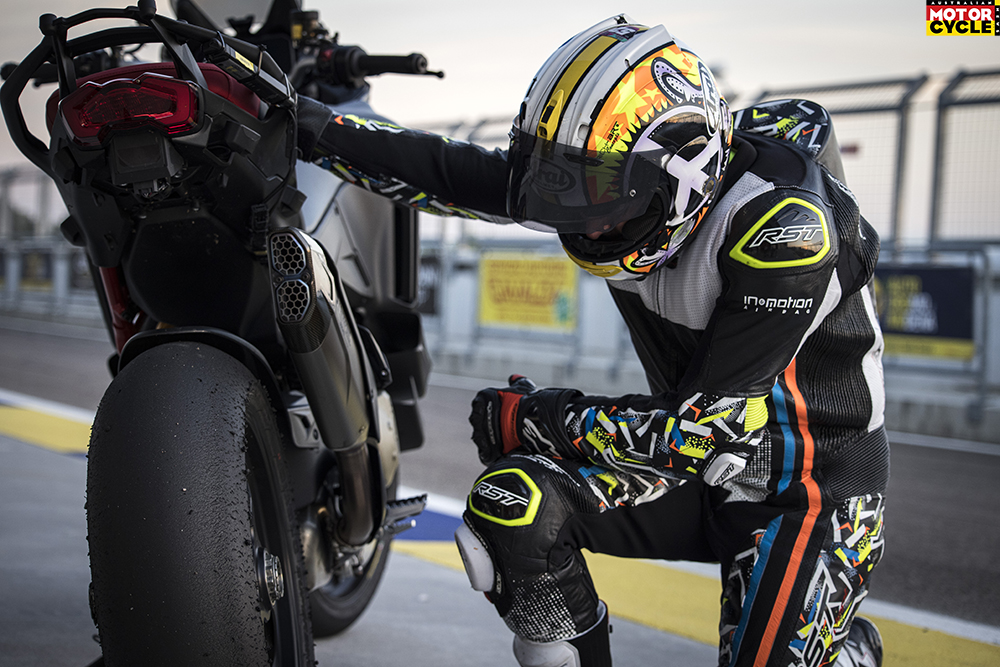