If there was one lesson that could be taken away from the Emilia Romagna Grand Prix, it was never to take anything in racing for granted. Wind, rain and an autumnal chill had contrived to complicate Fabio Quartararo’s (Monster Energy Yamaha) MotoGP 2021 championship hopes on the Italian Riviera as he faced the first match point of his career from a career-worst grid slot of 15th.

But the Frenchman faced this particular case of adversary as he has done all year, keeping his cool while picking off ten riders ahead before enjoying a healthy dose of luck as Francesco Bagnaia (Lenovo Ducati) crashed out of the lead with four laps to run. That was enough to make him a barely believing MotoGP 2021 World Champion at 22 years and 187 days of, the sixth youngest in history. 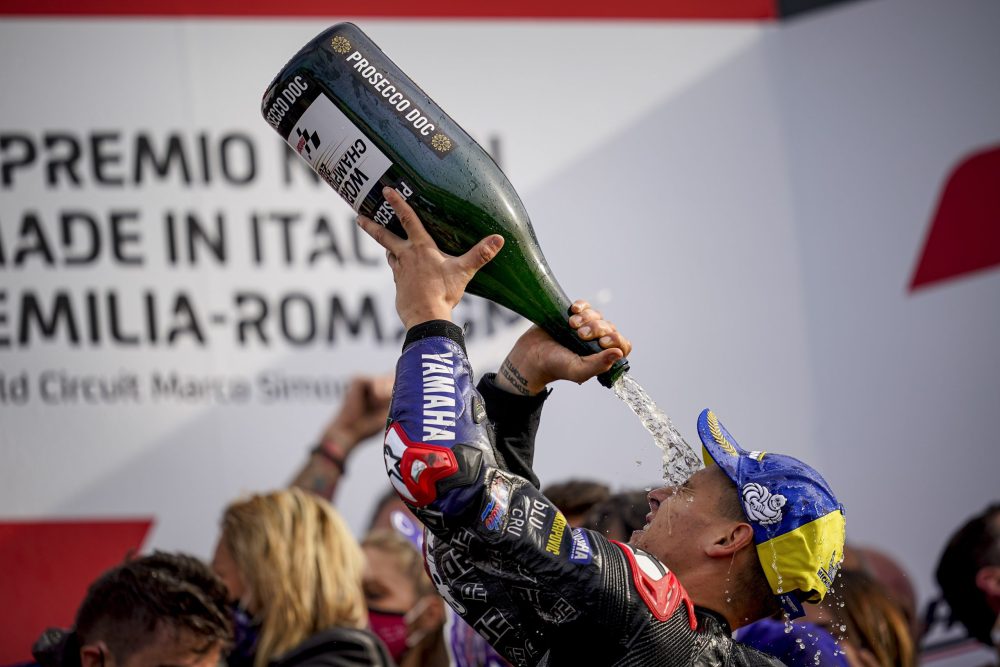 That was only part of the story on a wild, pulsating day of action. The race was the weekend’s first fully dry session for each category, meaning set-up required educated guesswork like never before. After qualifying, Aleix Espargaro (Gresini Aprilia) had given heed of what lay ahead: “There are a lot of doubts for all the riders which should make a fun race.” He wasn’t wrong. Ducati got its tyre gamble wrong, with Jack Miller (Lenovo Ducati) crashing out early in the encounter at the same place that claimed his team-mate while Marc Marquez (Repsol Honda) walked away with his second successive win at a track around which he was outclassed just a month before. 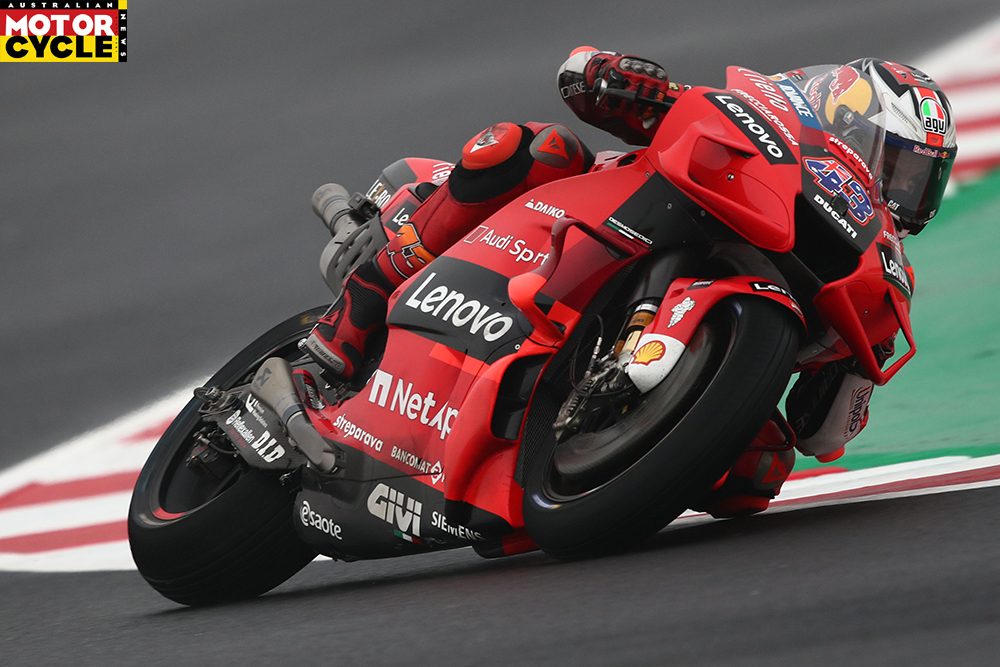 The surprises didn’t end there. Pol Espargaro (Repsol Honda) enjoyed his best performance of the year, claiming a somewhat fortuitous second. And Enea Bastianini nabbed third off Quartararo on the final lap for his second podium in three races – a feat that had never looked on, not least when he crashed three times on Saturday afternoon, leaving him stranded 16th on the grid. Oh, and there was the small matter of Valentino Rossi (Petronas SRT Yamaha) nicking tenth place – his second best finish of the year – before a ceremony marking his last home Grand Prix in front of 35,000 adoring fans. 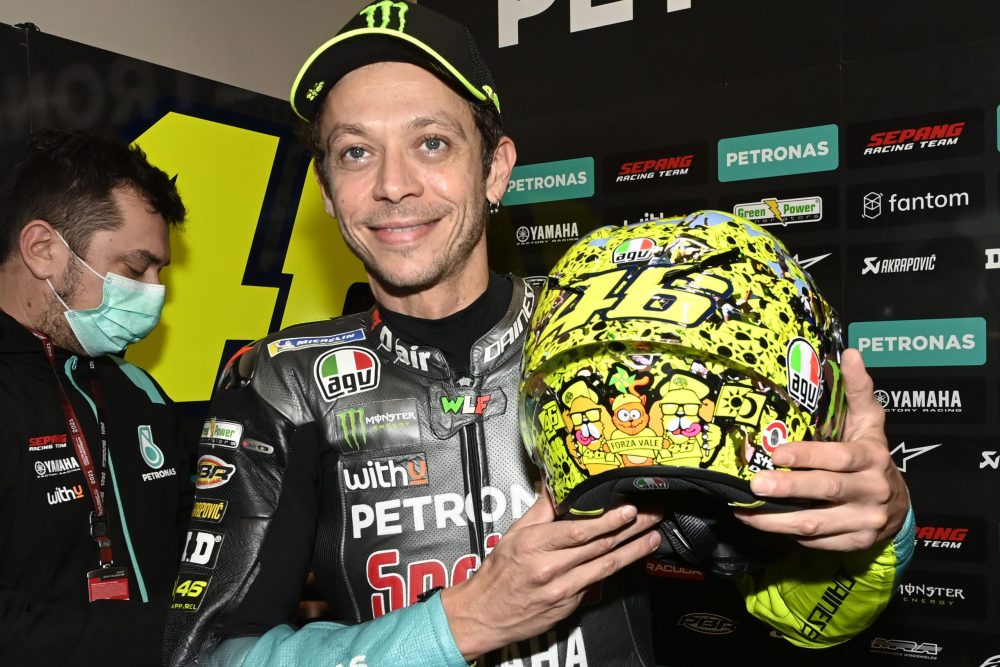 Yet as Marquez said, “Today is Fabio’s day.” Bastianini’s last lap mugging aside, the Frenchman handled the whole weekend with a maturity that belied his 22 years. He never gave the impression that a challenge phased him. And there were a few. Take the weather for instance: it’s long been known that neither Quartararo or Yamaha’s M1 is adept at finding grip in mixed conditions: Yet the Frenchman worked at it, posting the fourth fastest time in a wet-but-drying FP4. He was then unable to make his way through Saturday’s Q1, but simply acknowledged Bagnaia and Iker Lecuona (Tech 3 KTM) – one and two in that session – were simply faster. And not to worry; if he didn’t win the title here, “we’ll fight for it at the next race.” 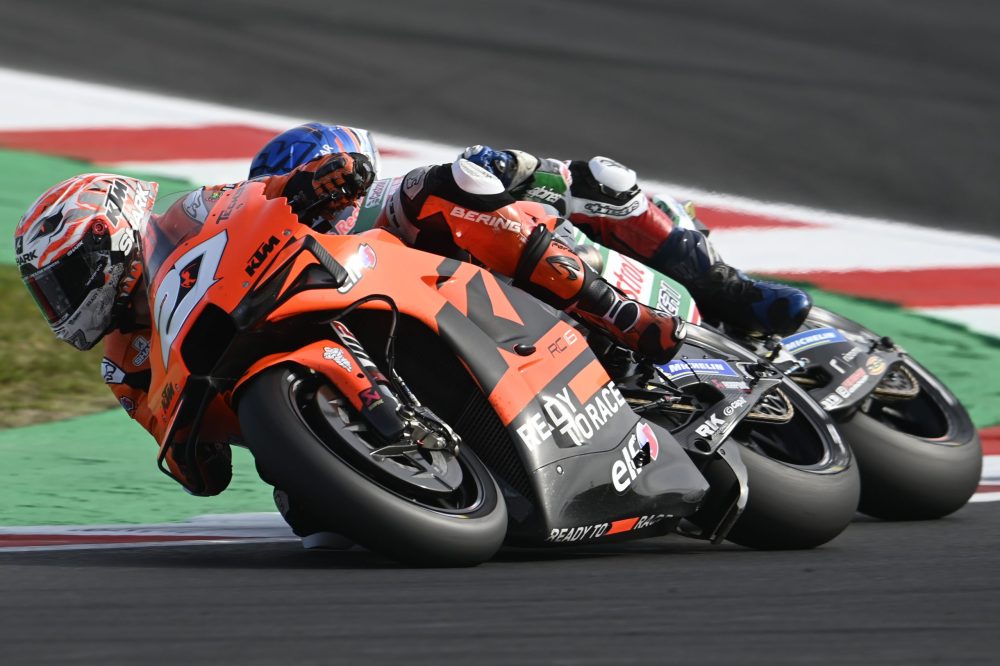 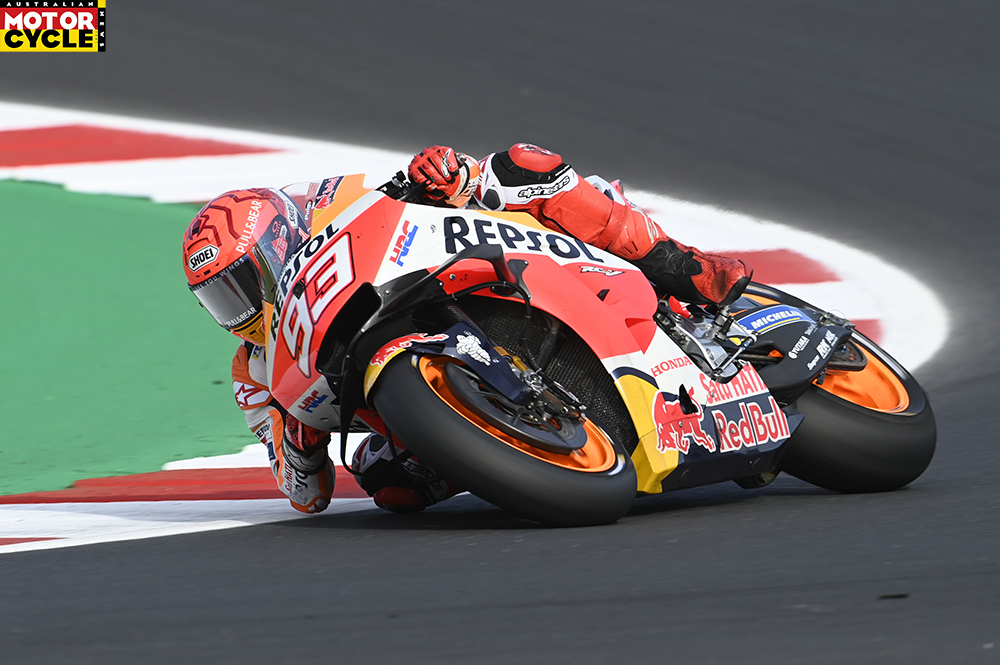 By then, the race’s deciding factors had already passed. The factory Ducatis of Bagnaia and Miller were the only men to run Michelin’s hard front compound. The medium – chosen by the other 21 – was too soft, and had a habit of collapsing during braking, according to the Italian. Ultimately, the challenge of maintaining the required heat on the rubber’s left side, was one neither could meet. 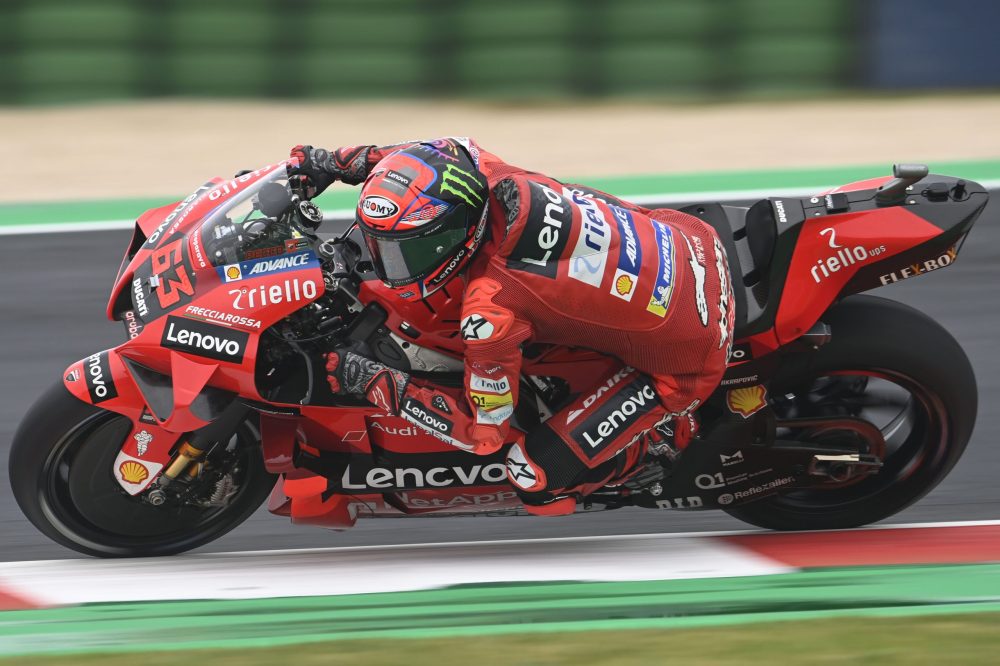 The first indication the cool temperatures could catch out the very best came on lap three, as Joan Mir (Ecstar Suzuki) folded the front at the turn two left, taking Danilo Petrucci (Tech 3 KTM) down and capping a miserable weekend. A lap later, Miller – riding within himself in second to protect Bagnaia’s lead – did the same, this time at turn 15, the track’s first left after 40 seconds spent going either straight or right. Later the Australian conceded, “It wasn’t quite warm enough” for the gamble to work. 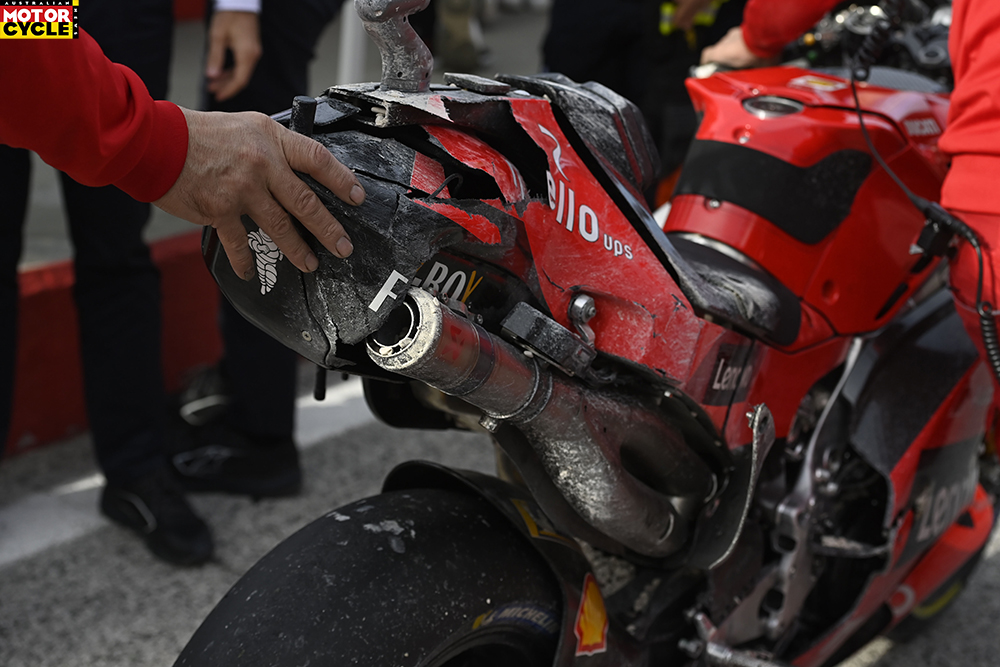 With Miller gone and Espargaro and Oliveira unable to run the leaders’ pace, Bagnaia just had to fend off Marquez to claim his third win in four. If September’s outing at this track was anything to go off, that should have been a simple task. But Marquez was buoyed by his recent success in Austin. And crucially he felt fresh on Sunday morning, thanks to the less strenuous wet running all weekend. “That gave me the chance to arrive to Sunday with energy,” he said. No matter how hard Bagnaia pushed, he just couldn’t shake the Spaniard off, even after a string of personal best laps from 16 to 19. 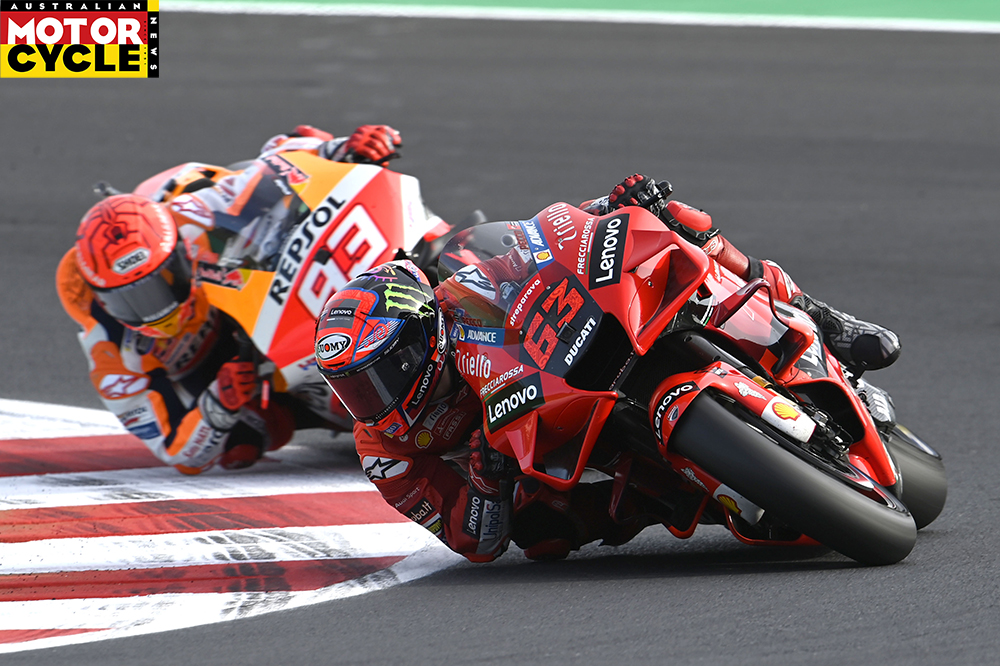 That wasn’t Bagnaia’s only concern. Any hopes he could make huge inroads in Quartararo’s championship lead were fading as the Frenchman launched a resolute recovery, joining a five-rider fight for fifth place that included Aleix Espargaro, Morbidelli, Marini and Alex Rins (Ecstar Suzuki) on lap 13 with Johann Zarco just behind. He was past them all within six laps, with moves coming on Rins at turn four and Espargaro’s Aprilia at turn ten showcasing his prowess in braking. 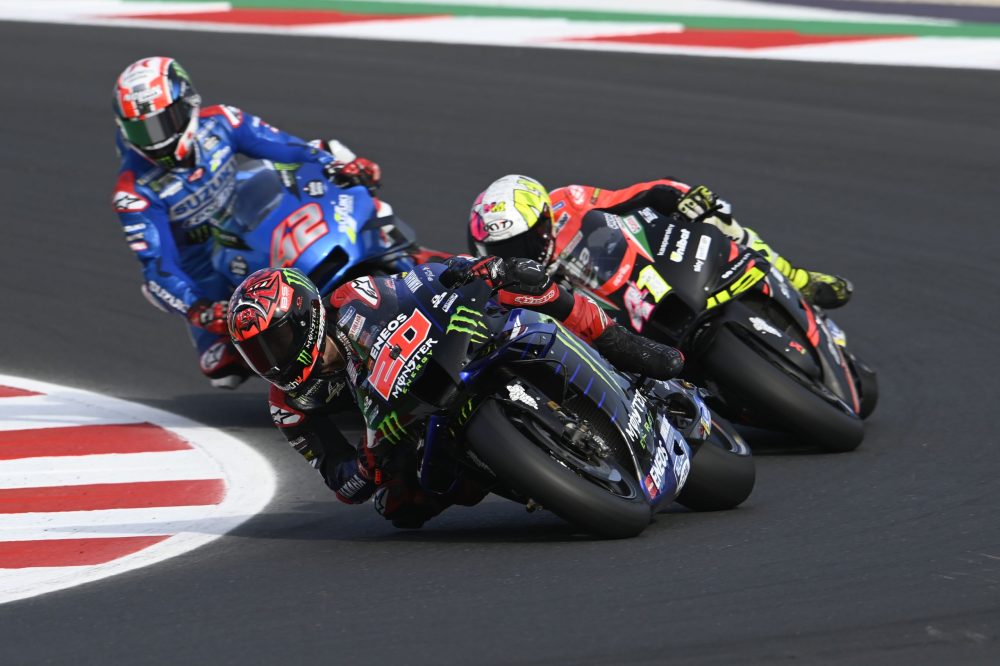 Up front, Marquez was still hovering in second, posting in his personal best time 20 laps into the contest. But Bagnaia finally put some distance into his pursuer with a burst of aggression late in the race. By lap 22 he finally had some breathing space, with Marquez now 0.7s behind. A third win of the year appeared a formality until he then pitched into turn 15 for the 23rd time. In a carbon copy of Miller’s crash, the front tucked, and at speed. Team boss Davide Tardozzi dropped to his knees, his rider’s title chances extinguished for good. On the fine margins of managing the hard front, he later revealed, “You just needed to push like hell every single lap to keep the tyre hot. On this lap maybe I braked a little earlier in Turn 8.” 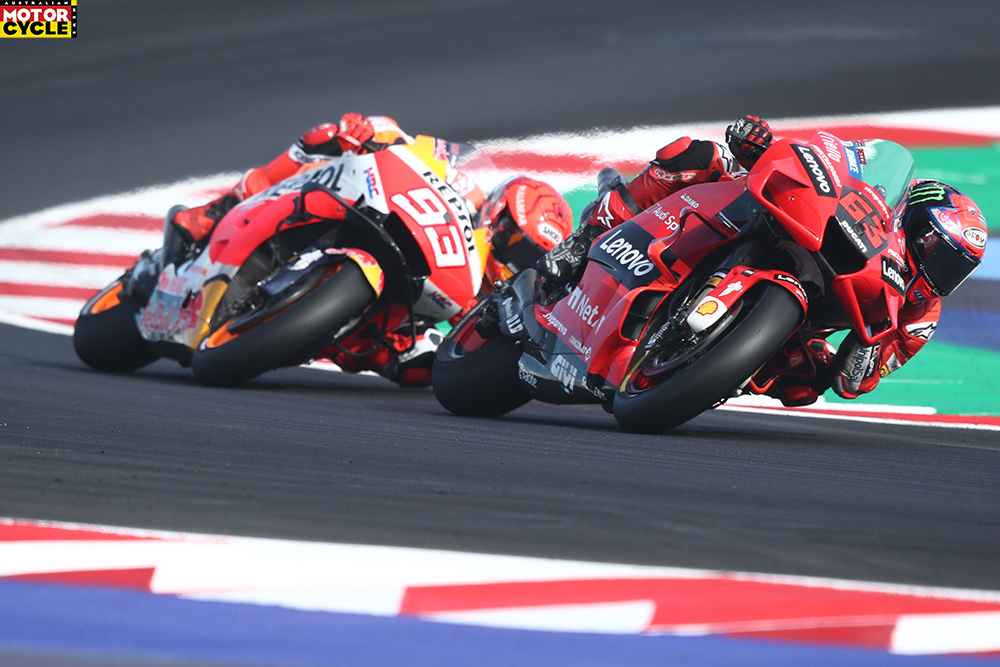 That left Marquez clear to win his third race of the season by 4.8s, his first victory at a clockwise track layout since breaking his upper right arm last July. “It’s true that Pecco was faster than us,” Marquez conceded. “In the lap when I gave up because he was pushing a lot is when he crashed. 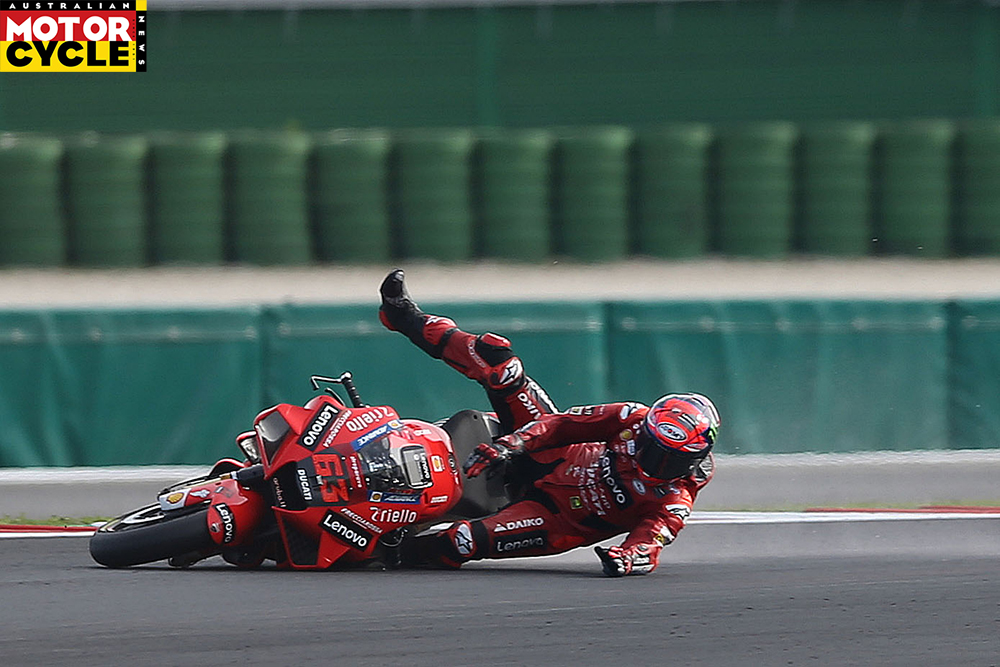 But we were able to push, be fast and competitive.” Pol Espargaro inherited a safe second, making it Repsol Honda’s first 1-2 since Aragon, 2017. “I took a huge risk in my career (by leaving KTM) last year and, honestly, I was struggling a lot during all year. To get this result is super nice.” 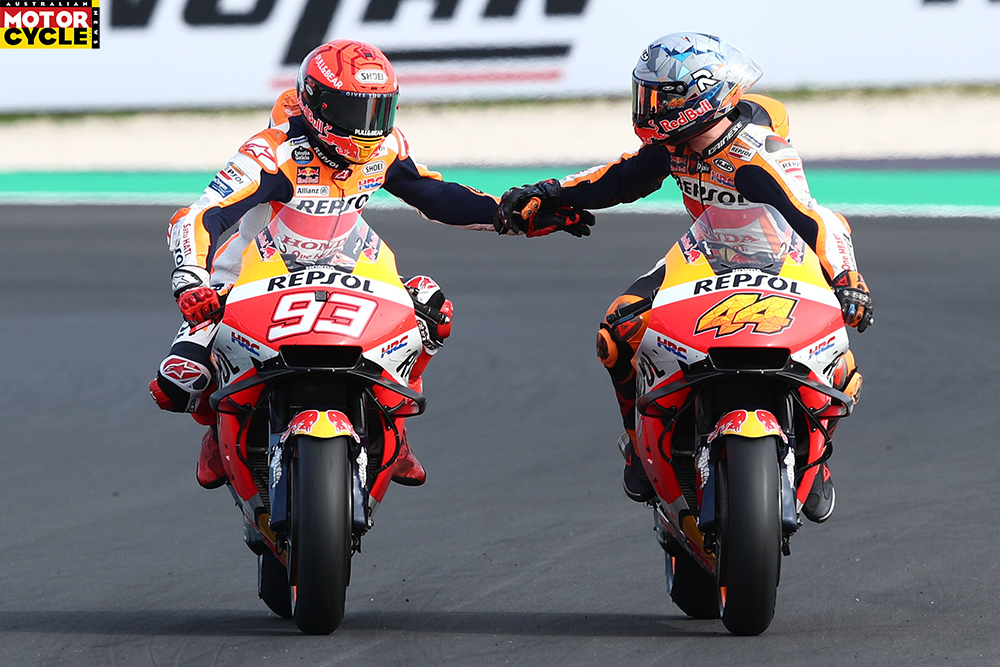 Bagnaia’s crash rendered Quartararo’s position meaningless – he was already champion. Still, he found himself third after Oliveira fell out at turn 14 on lap 23. But that wouldn’t last, with Bastianini nabbing the final podium place three turns from the chequered flag after following Quartararo’s lead, ghosting through the pack. This was another splendid effort after ending the first lap 18th. 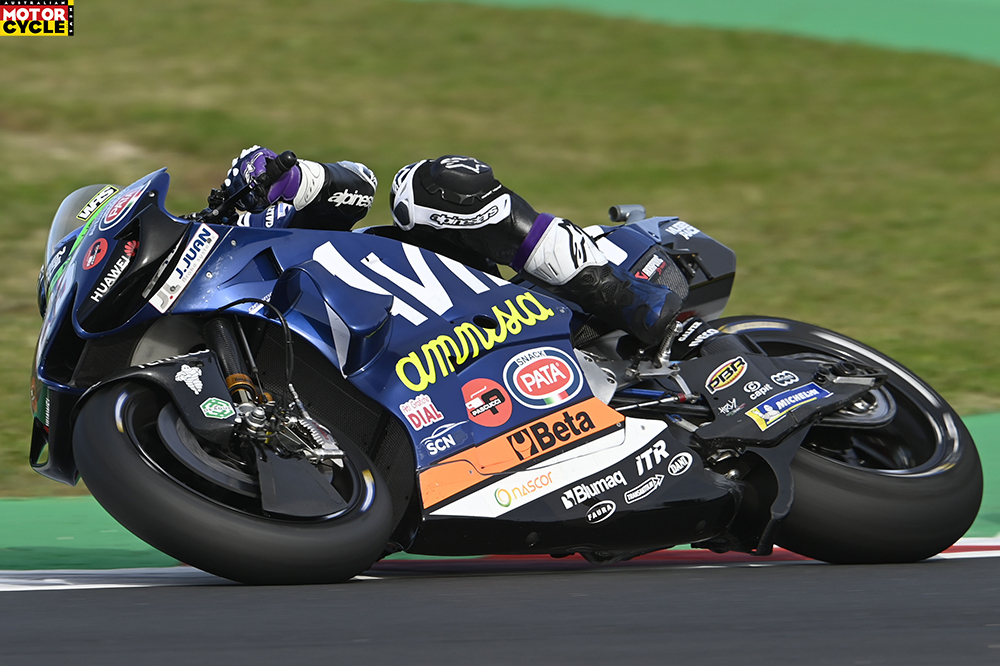 Any frustration at losing the podium soon evaporated for Quartararo, who broke down on his victory lap. No one could say he didn’t deserve to become the sixth youngest premier class champion in history. Zarco eventually came through to fifth, a place ahead of Rins. Aleix Espargaro dropped to seventh and was nearly caught late on by team-mate Maverick Viñales (Gresini Aprilia). Marini was ninth, a place ahead of older brother Rossi, inside the top ten before bidding his home fans farewell. 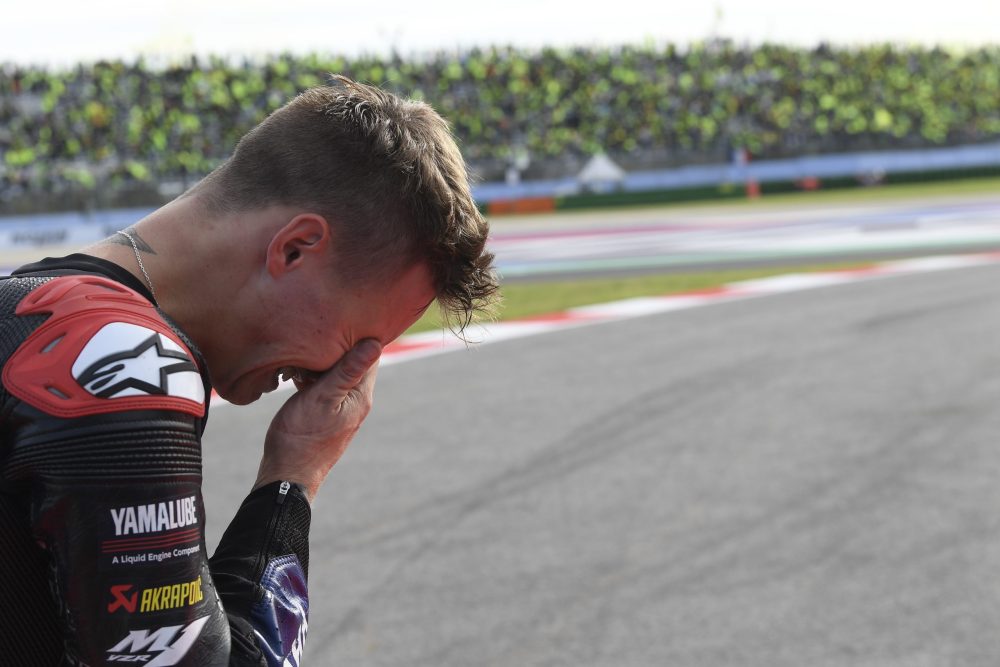 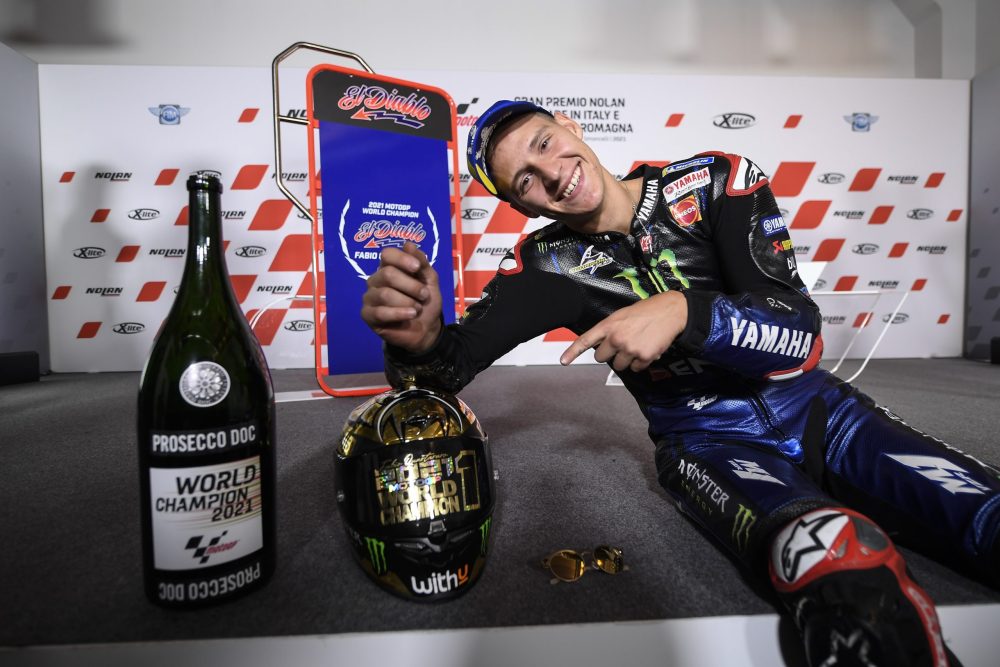