In an increasingly competitive segment, Metzeler has evolved rather than revolutionised its Karoo and Tourance Next ranges. But is it enough?

I had a strong feeling of Déjà vu when I arrived at the launch of Metzeler’s new Karoo 4 and Tourance Next 2 adventure rubber. I was getting ready to hop on the same Metzeler-shod BMW R 1250 GS Triple Black that I had used on the BMW GS Safari in Tasmania a week and a half earlier and I know that because it was still carrying the battle scars from a beach prang in Strahan (read the feature here). 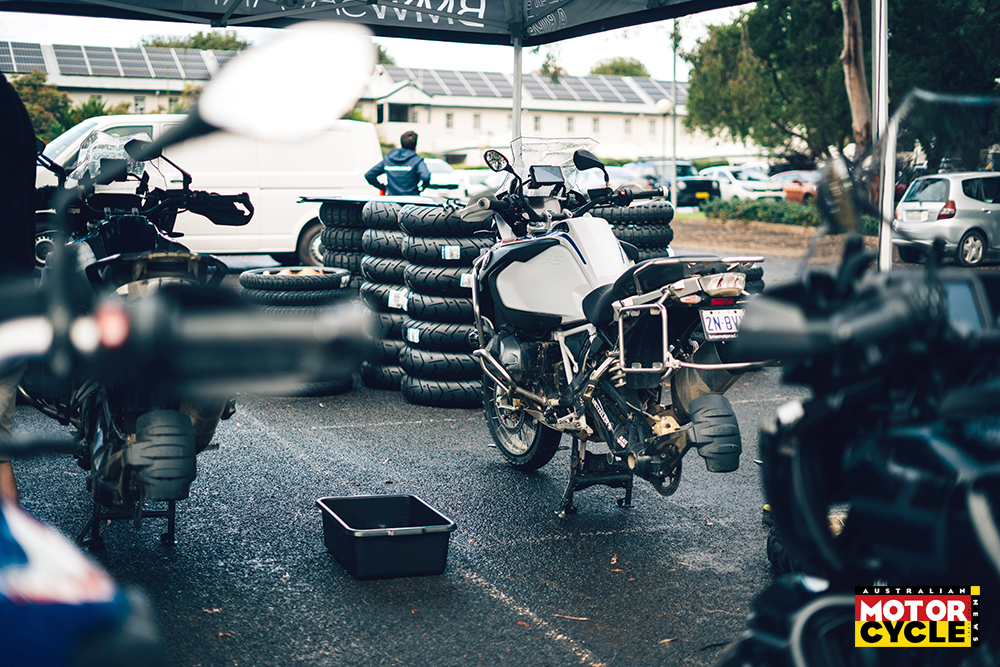 I’ve done a lot of kilometres on Metzeler’s Karoo 3 recently, as well as my time in Tassie, I did the run between Melbourne and Sydney on a Triumph Scrambler XE shod with Karoo 3s and I also tested both the Karoo 3 and Tourance Next in last year’s adventure issue (AMCN Vol 71 No 08), so well placed to give a back-to-back comparison between the new and old rubber. 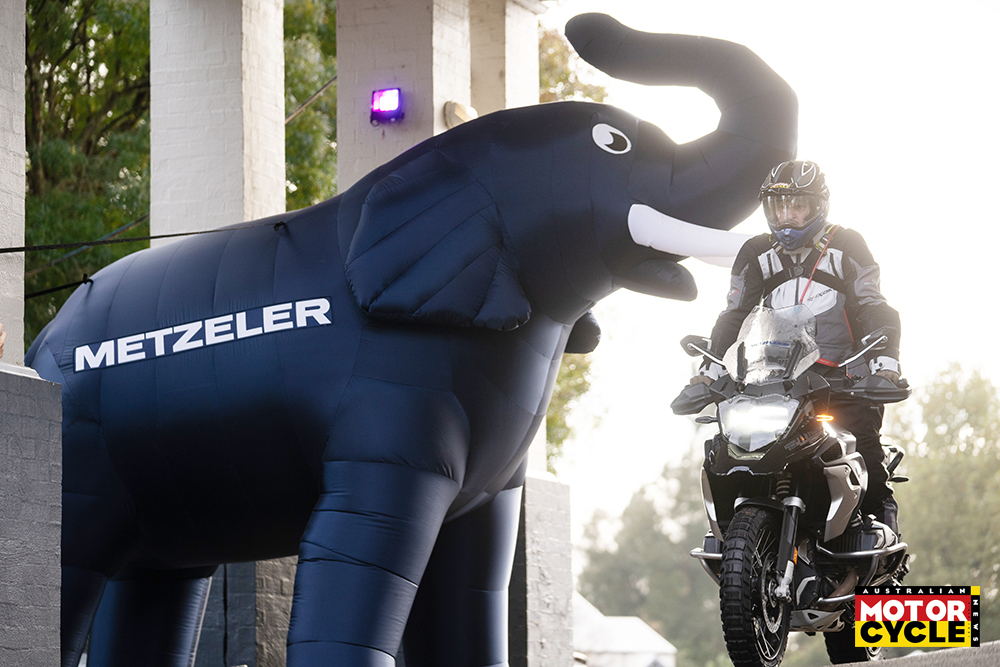 Why the elephant? The fable is that company founder Robert Friedrich Metzeler wanted to demonstrate the strength of his tyres at the 1906 Berlin International Motor Show, so he hired an elephant and had it trample one of his tyres.

The two-day launch had us on the Karoo 4 hoops on day one for a heavily off-road focussed test in the hills around Wisemans Ferry in New South Wales, while the second day was spent doing a run up the Putty Road to Bulga and back on the Tourance Next 2.

There was a variety of bikes to choose from; BMW’s R 1250 GS and GS Adventure, a KTM 1290 Super Duke GT, Harley-Davidson’s Pan America, a couple of Ducati Multistradas and a pair of Husqvarna Norden 901s. Let’s go.

The Karoo 4 is designed for big adventure bikes and riders that value performance off-road. The Karoo 4 is more of an evolution than a fresh tyre, which is a good thing because the Karoo 3 is a fantastic tyre. Off-road performance is excellent and on-road grip is next level for a tyre of this style. 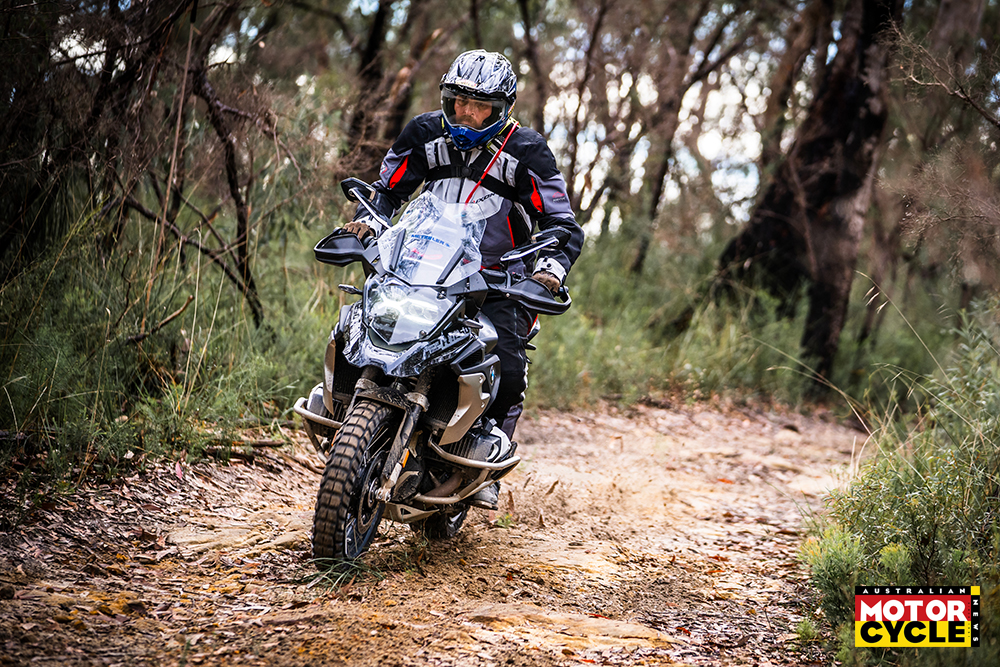 The most obvious change – visually at least – is the new tread pattern. According to Metzeler, the new tread pattern offers improved overall on-road handling especially in wet conditions with a knob and carcass design that is more stable when you’re on the side of the tyre. The updated tyre also has a bigger contact patch than the outgoing one for increased grip.

We did minimal kilometres on tarmac and when we did it was wet, so I didn’t get the chance to test the 4’s on-road abilities as much as I’d like. In the dirt Metzeler have focussed on improving traction on softer surfaces such as mud and clay. The Karoo 4 features central spoon-shaped knobs, separated from the side knobs by a groove which, according to Metzeler, traps the terrain between the knobs to generate lateral thrust and then spits it out. So effectively reducing the build up of crud that adventure tyres are prone to in muddy conditions. 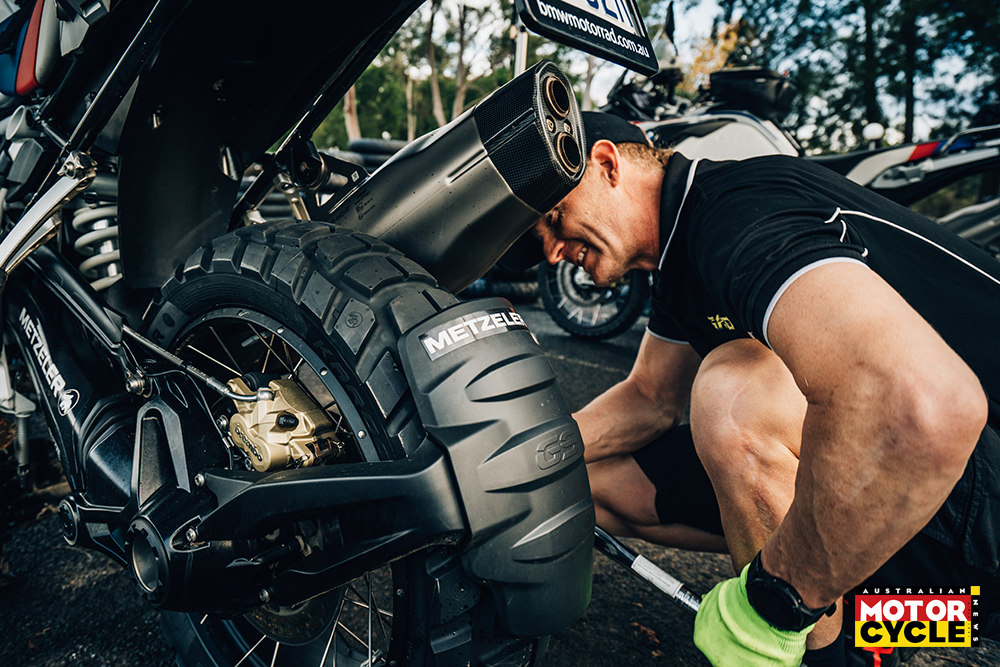 I’m no demon off-road so there could be improvements in the tyre that I’m simply not competent enough to recognise, but what I did find was that in mud and clay, the new tyre was more reassuring and stable than the one it replaces. We’ve all been there, you crest a hill and there’s a big patch of red clay, you pucker and hope for the best. It’s in this situation that the Karoo 4 shone for me. It didn’t skate around as much as other tyres I’ve ridden on and for me that’s a massive win.

But for a guy that does more riding on the road than off it, it’s the front-end feel and grip that impressed me the most. Road riders put far more weight on the front tyre while cornering than you on an adventure bike, and we get away with that because grippy road tyres on a consistent surface pump huge amounts of feedback back to the rider. A lack of confidence in what the front is doing off-road is something I’ve always struggled with on big adventure bikes, especially on BMWs with their Telelever front end, so when that situation improves, I notice.

It’s the first time I’ve felt really comfortable carrying some speed through off-camber corners off-road on a R 1250 GS. Perhaps that’s just because I’ve been riding a lot of adventure bikes lately or perhaps the Karoo 4 is that much of an improvement – I’m thinking it’s somewhere in the middle. 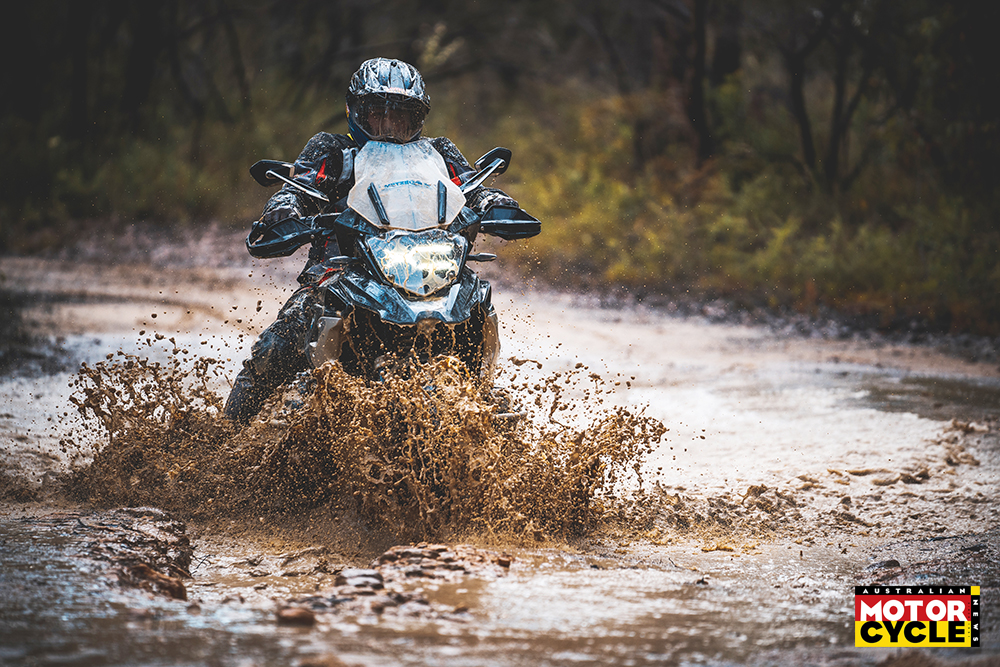 I’m confident in backing up Metzeler’s claim of improved road and off-road performance, but there was little mention of increased durability in the new design. There are always going to be compromises in a tyre that needs to perform well on and off the road, but I bet that there are more riders who would prioritise better milage over greater performance when forking out for adventure hoops.

The Karoo 4 rears on the test fleet looked pretty worse for wear after our day’s ride and, considering a rear Karoo 4 starts at $239.95 and tops out at $329.95, I reckon it’s a relevant concern for adventure bike owners. Because durability wasn’t satisfactorily addressed during the briefing, I put the question to the right person, but a response hadn’t arrived by the time AMCN went to press.

Just like the Karoo 4, the Tourance Next 2 is more evolution than revolution compared to the original Tourance Next. The Next is aimed at adventure bike riders who value on-road performance over off-road prowess.

It may sit in Metzeler’s adventure range, but I couldn’t tell you anything about the Tourance Next 2’s off-road performance because I didn’t get the opportunity to try them on the dirt. What I can tell you is that the Tourance Next 2 sticks to the road like poo to a doona. The original Tourance Next is an excellent tyre, reasonable off-road if the conditions are dry and a tyre so confidence inspiring and able on the road, they had my knee almost touching down on the photoshoot for the adventure tyre feature last year. 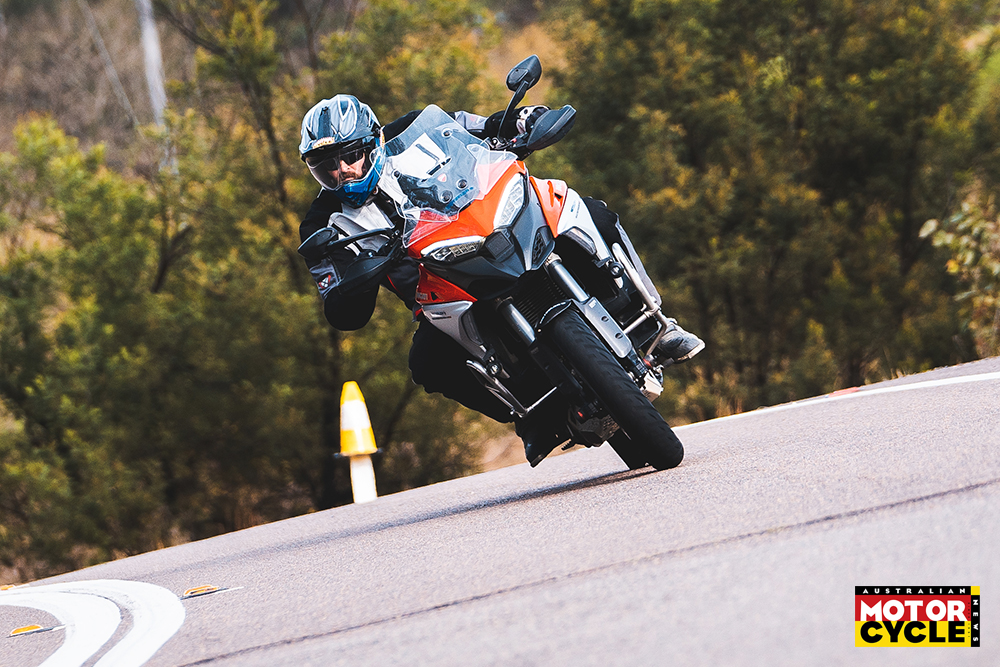 The Next 2 features a new high-silica compound aimed at enhancing its grip in the wet and stability, which Metzeler claim has reduced braking distance by more than 10 percent. Rears feature a central strip of the same compound that’s used on the front, while the full-silica shoulders increase wet performance and grip while leaning through a corner. The new tread pattern is designed to ensure greater compound stability which provides more uniform wear and reduces performance drop-off as the tyre wears.

The ride up the Putty started pretty casually but by half distance we were in race mode chasing BMW GS guru Miles Davies through the twisties at speeds that would really upset lawmen. It was about now I realised the Tourance Next 2 feels closer in on-road performance to a really grippy sports-touring tyre than it is to an adventure tyre. 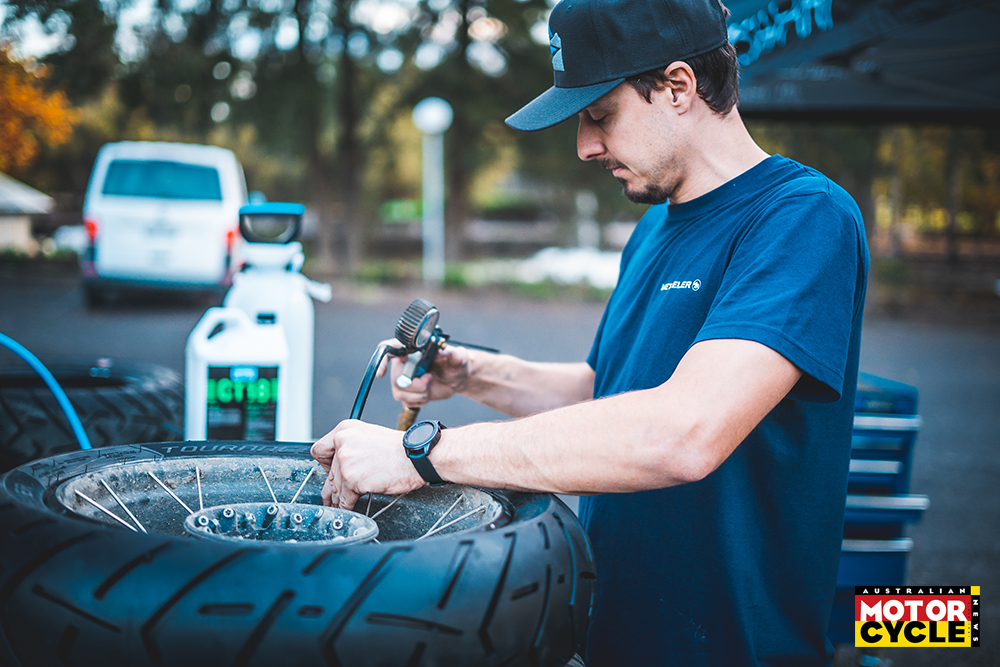 I don’t have anything bad to say about the Tourance Next 2 – nothing. Perhaps if we had been let loose off-road, I would have found something to pick on, but on road the Next 2 is simply brilliant. The level that you can push this tyre to on the road is quite remarkable whether it’s wet or dry.

The evolution rather than revolution approach has worked for Metzeler with the Karoo 4 and Tourance Next. Both tyres’ predecessors are excellent, and the new versions are just that little bit better without losing the traits that made their predecessors such good hoops. 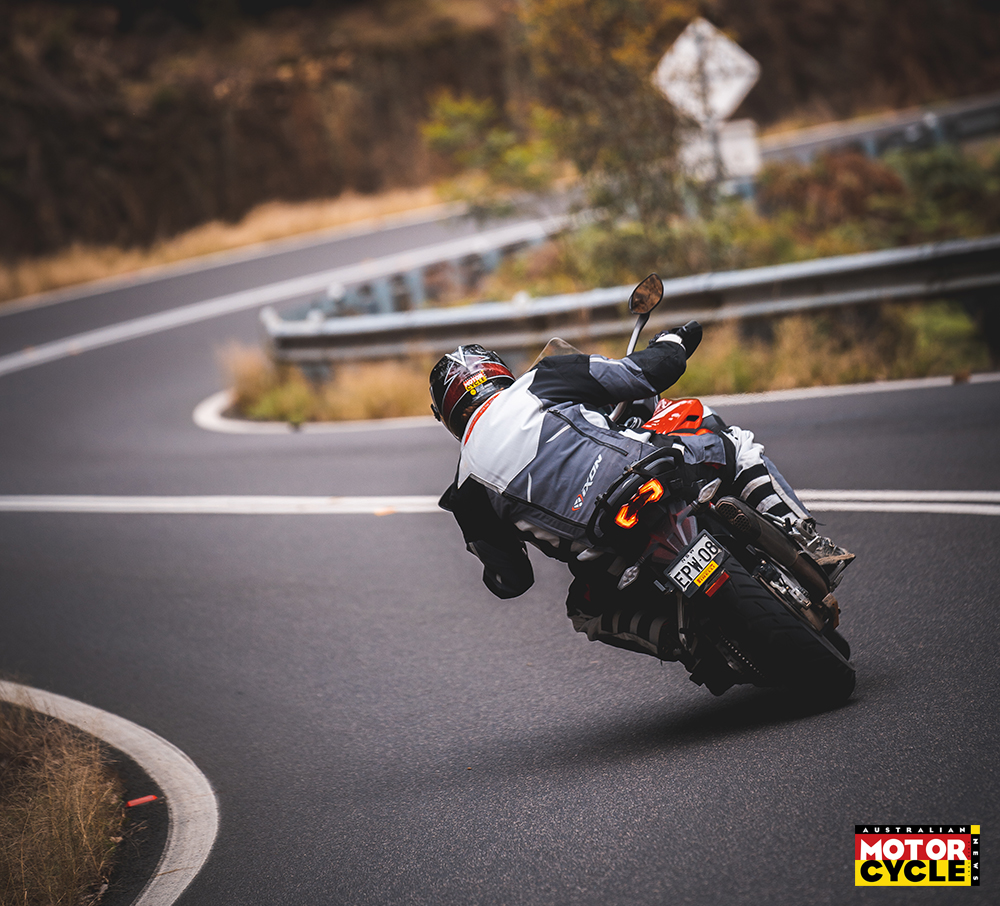 I would like to have seen more attention paid to the durability of the Karoo 4 rears, these suckers are expensive, and you could easily destroy a rear tyre in a weekend if you’re heavy on the throttle – although that’s not a problem limited to Metzeler, to be fair.

With an already great range of adventure hoops, it’s clear Metzeler isn’t resting on its laurels. Though  in a segment as big as the adventure bike market that is still experiencing strong growth, it’s probably best that one does what one can to stay at the pointy end of the competition.  <es>

Sizes and Pricing: Tourance Next 2