Now in its 28th year, BMW’s GS Safari continues to grow in popularity. And you’ve only got to turn up to know why.

Anyone who’s turned a wheel on an adventure bike has surely heard of BMW’s GS Safari. You may not own, have ever owned, or even contemplated owning a GS of any persuasion but there’s no denying the unique passion GS riders have about their bikes. After attending the most recent GS Safari in Tasmania recently, even I felt I’d been missing out on that special something that comes with GS ownership, not to mention wanting to be part of the Safari in the future. Badly. 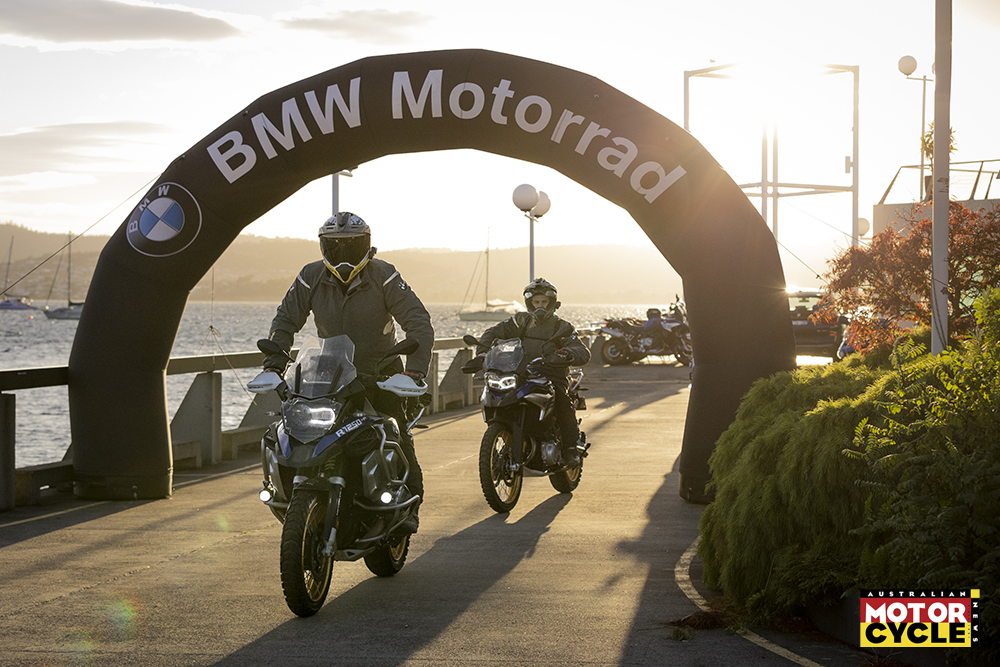 Riders of other brands may snigger at the fully supported format the Safari runs, but this year the event celebrated its 28th birthday, and it’s only getting more popular. So much so that the 220 places available for this year’s event sold out in less than 30 minutes and the demand for more places was so intense that BMW held an identical version one week later. 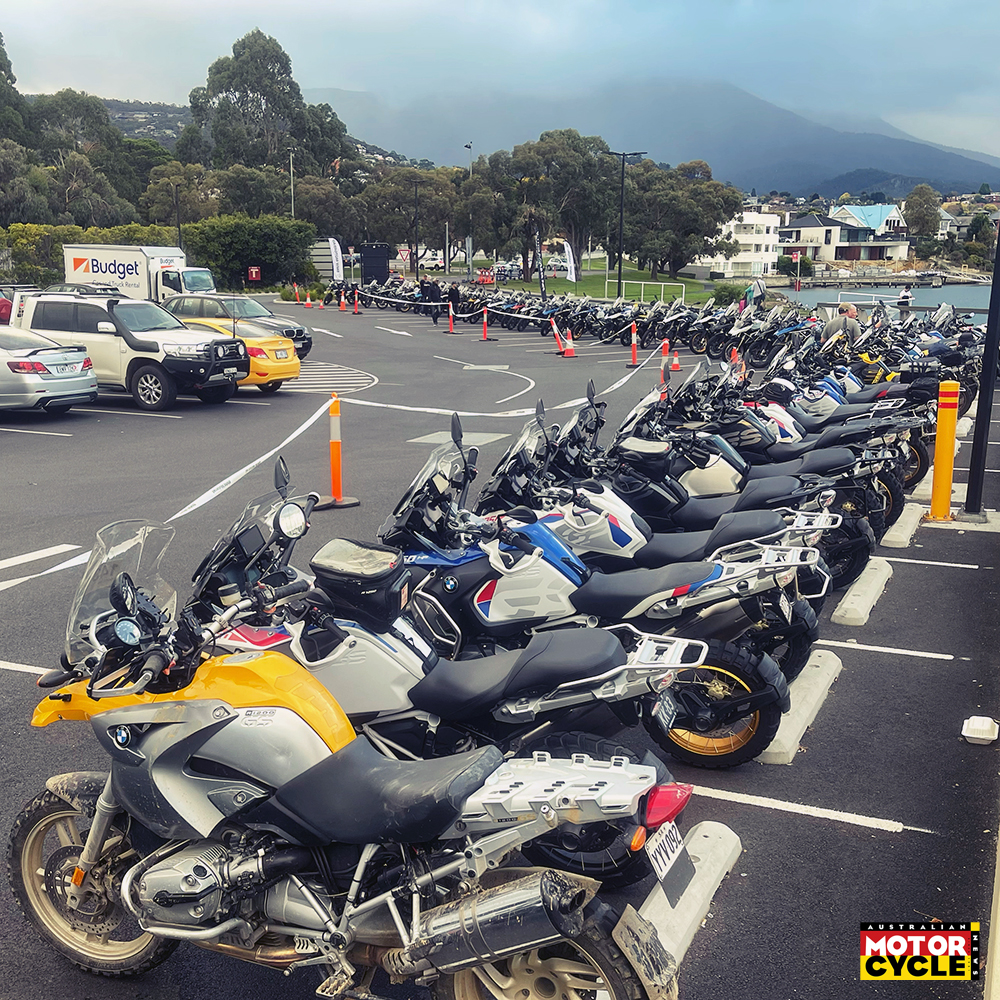 After losing my Safari seat last year to Wattie due to a malfunctioning gall bladder, I was very keen to get my Safari on and join in for three of the five days for this year’s event and, because I’m not one those aforementioned GS owners, with the use of one of BMW Australia’s R 1250 GS Triple Blacks.

I was pretty stoked when I saw that this year’s event was taking place in Tasmania – I’d heard endless amounts of people wax lyrical about how good the riding is in Tassie and they weren’t wrong. If you’ve never done Tassie by road or dirt you need to get there, immediately – the countryside is gorgeous, the coppers are lenient and the roads are just amazing. 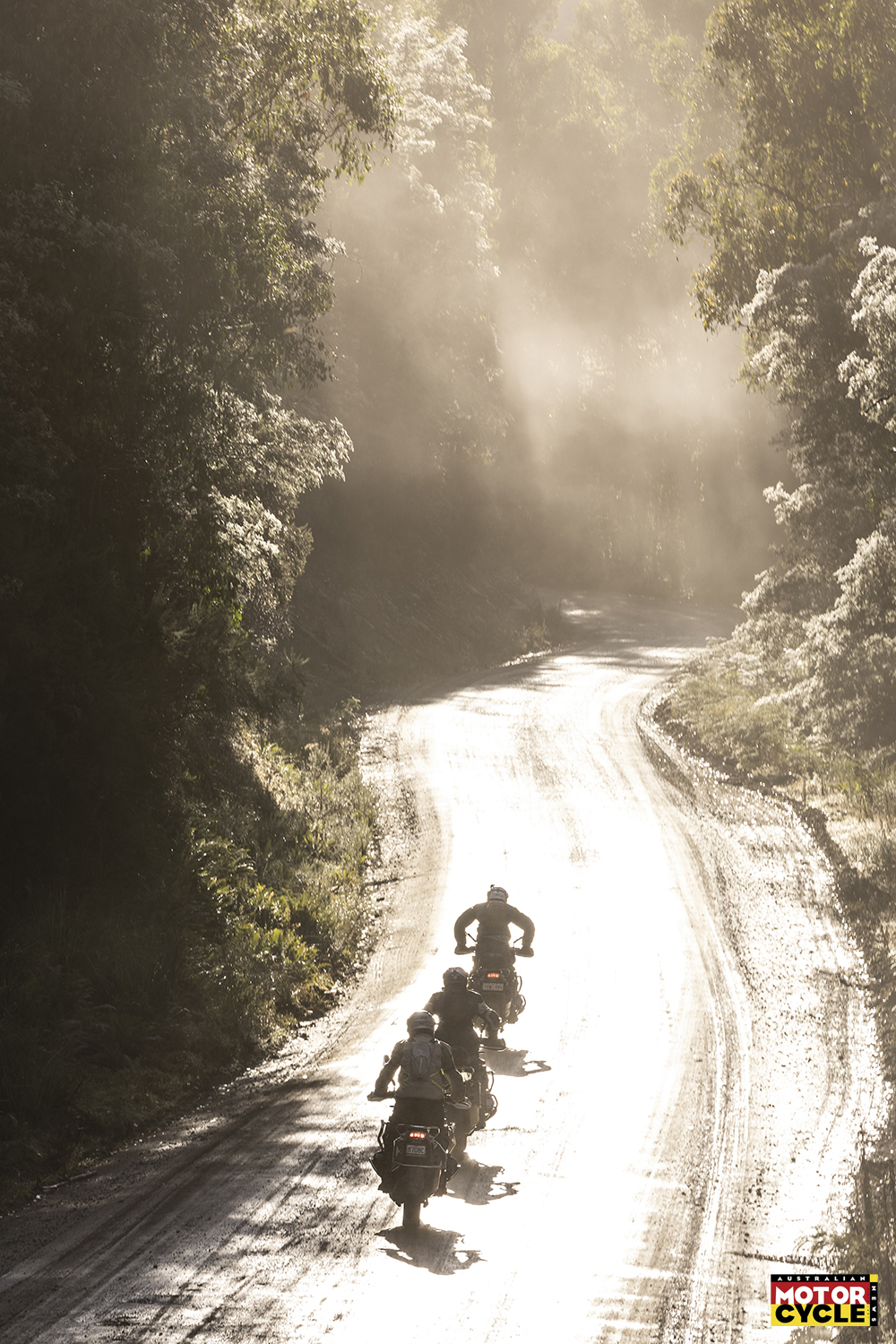 The GS Safari is mostly an off-road event and while there are some challenging sections there’s nothing that can’t be conquered with some care and commonsense. The crew can control the route but they can’t control the conditions, and the good front that enveloped the Apple Isle and rain that hammered us from the outset made the need for a care and commonsense a bit more crucial.

The off-road sections are linked by some of the best tarmac in Australia, snaking through the dolerite and quartzite mountains and hillsides with stunning scenery everywhere you look and well maintained roads in every direction.

The Safari’s not a guided tour. The route is marked with small, but brightly coloured arrows, there’s a hard-copy map provide at the daily rider briefing and GPS files also provided as a backup. Riders can do the route at their own pace, but it’s best to keep a decent pace and refrain from making too many coffee stops – nobody wants to be coming in at night when the temperature is in the low single digits and the rain is putting your gear to the test. 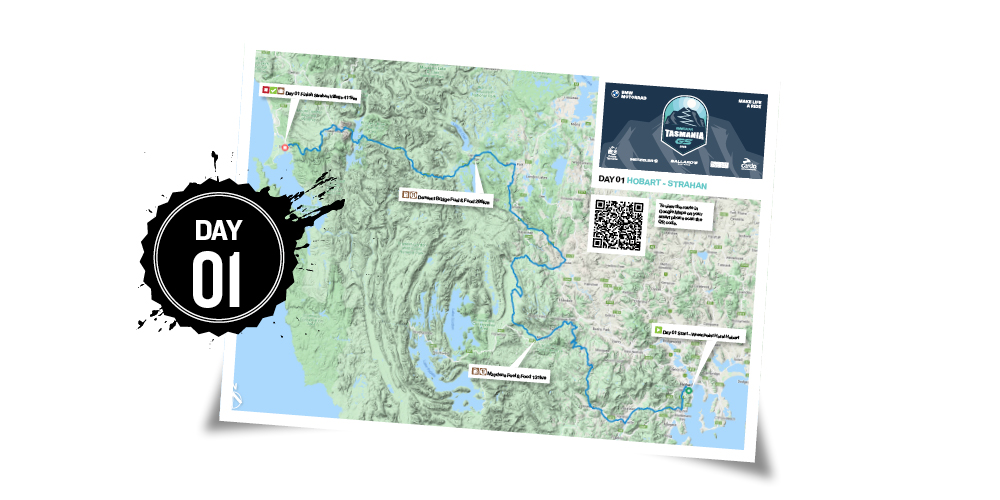 To avoid the swarm I set off after most riders had departed, right on the cusp of missing the allowed departure window. Unfortunately, the petrol fairy had failed to visit the Triple Black overnight and I was on the grid with very little fuel, so I grabbed the first servo out of town to fill up. I’ve ridden quite a few 1250 GSs and I’m not aware of any secret fuel cap release – just turn the bike off, lift the cap flap and it should open. It didn’t. And it wouldn’t. After stuffing around with it for 20 minutes I gave up and called tech help. By the time the cap was sorted, and I was on the road I was at least 40 minutes behind the group and, as it turned out, behind the sweep riders. 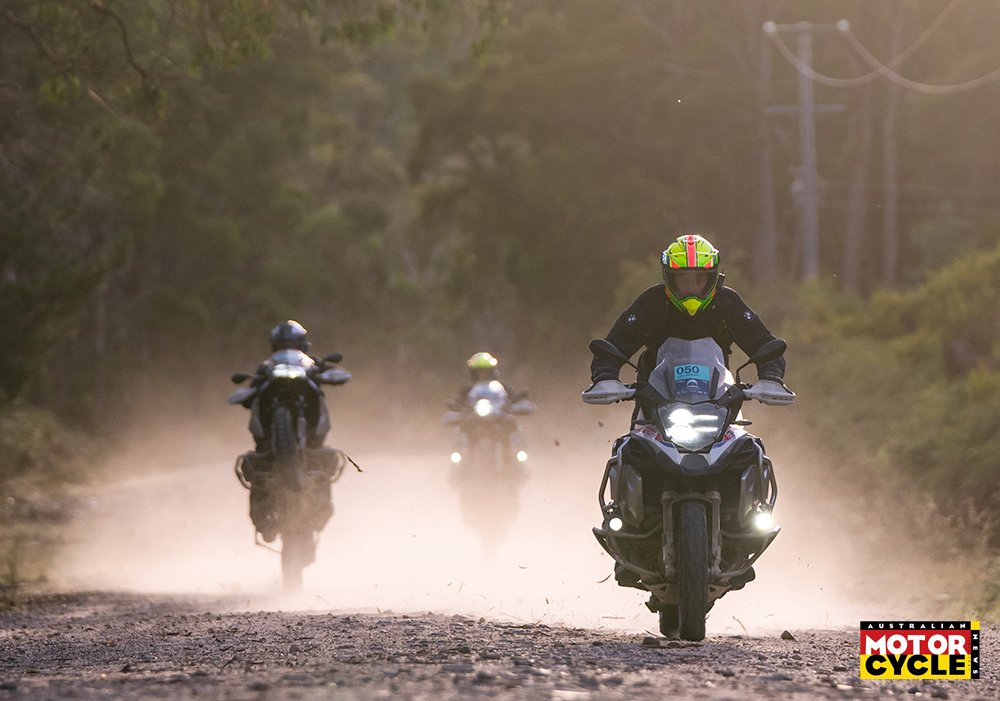 I tested the discretion of the Tasmanian constabulary as I made up time and finally caught the tail end of the group as they sipped coffee at Maydena. A splash and dash fuel stop still had me mouthing rude noises at the bastard fuel cap again.

The GS Safari is not race, but the first sniff of dirt had some people kicking into Dakar mode whether their skill level was up to the task or not. I followed a gentleman on an F 850 GS and when he knew I was on his tail he picked up the pace. I go by the philosophy that every ride is a race and if he wanted to get competitive, I was happy to oblige. The warnings started with old mate over-cooking a few corners until he over-cooked a tight right hander with a decent drop down a tree-lined cliff. I’m not sure if it was arse or class but he managed to use a roadside ridge of dirt as a berm which he hit at frightening pace and somehow kept it upright and got through the corner. 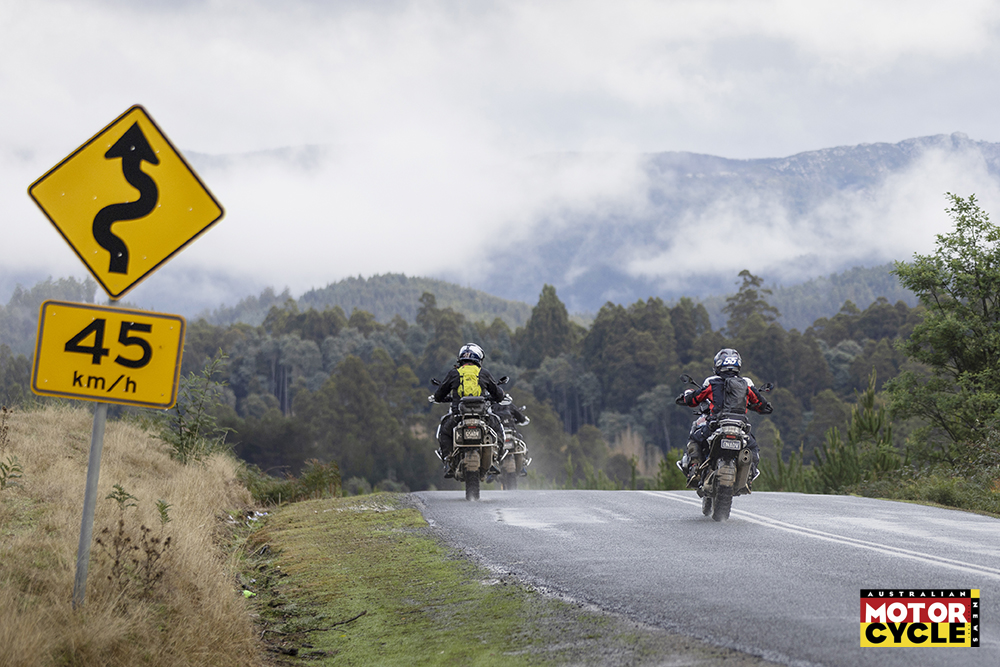 I’m sure there were a million little incidents like that but from all reports there was only one poor sod looking for alternative transport home after he demolished his fairly new R 1250 GS Adventure.

The combination of excitement, concentration and conditions saw countless riders including myself glide past a perfectly visible orange route marker. 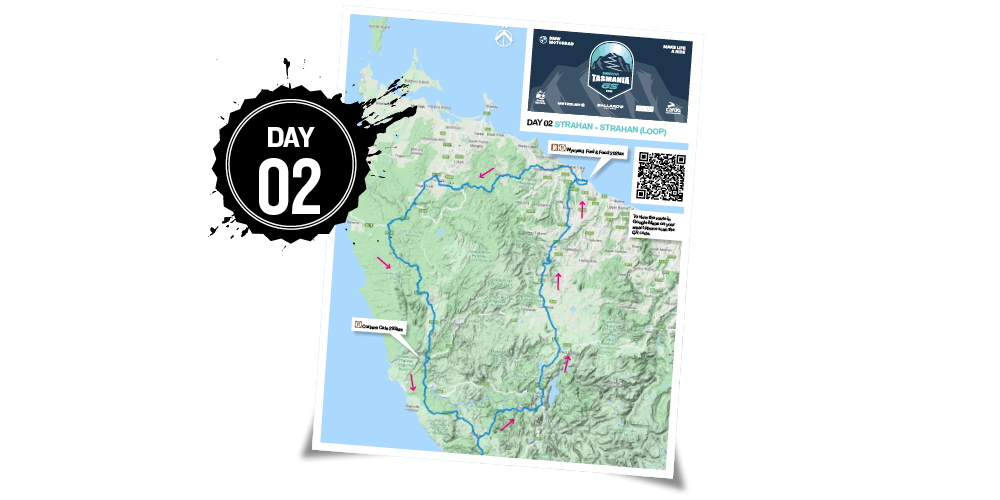 Day two was ‘loop day’ and headed right up into the north-west corner of the state. The first 200km bitumen run to Wynyard is some of the best road riding you could ever hope for – corner after corner on beautiful roads and even the consistent heavy rain and frigid temperatures couldn’t dampen the fun factor. 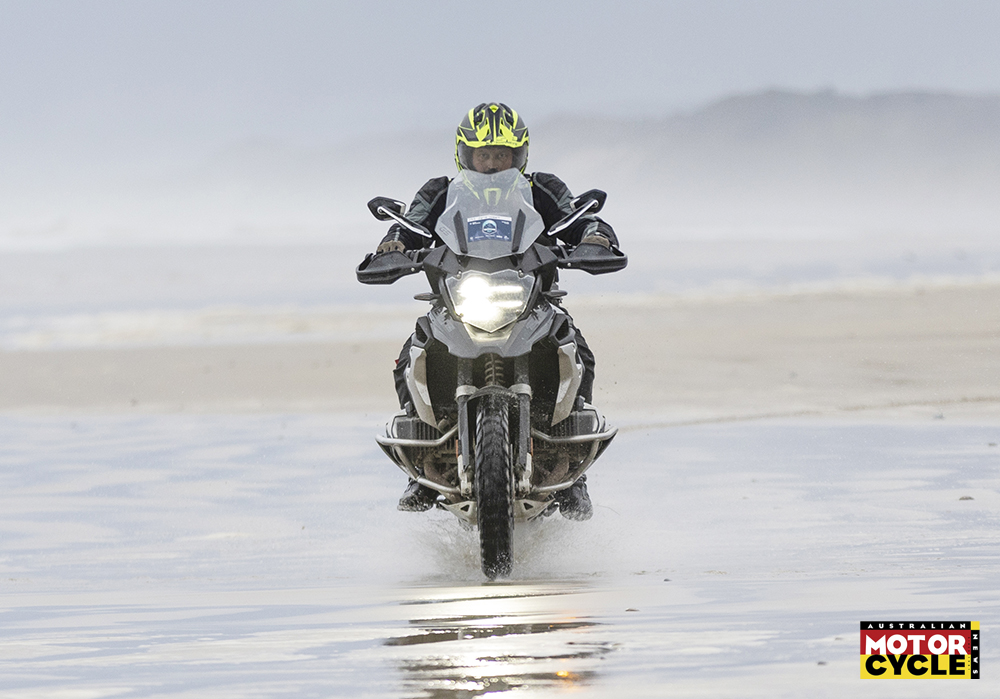 Overtaking other riders whose confidence has been sapped by their off-road tyres on wet twisty roads can be a challenge, and the urge to pull an aggressive pass can overcome you after a while. But the camaraderie built up after a couple of nights around the bar and a day on the bike makes you think twice – you don’t need to get a tap on the shoulder from some angry GS owner at the evening briefing. Each morning, before most of us have even crawled out of our warm beds, the Safari crew is out marking the day’s route with coloured arrows and checking the conditions. With heavy downpours overnight the decision was made to offer an alternative route that cut out an off-road section that had been turned to slop overnight. 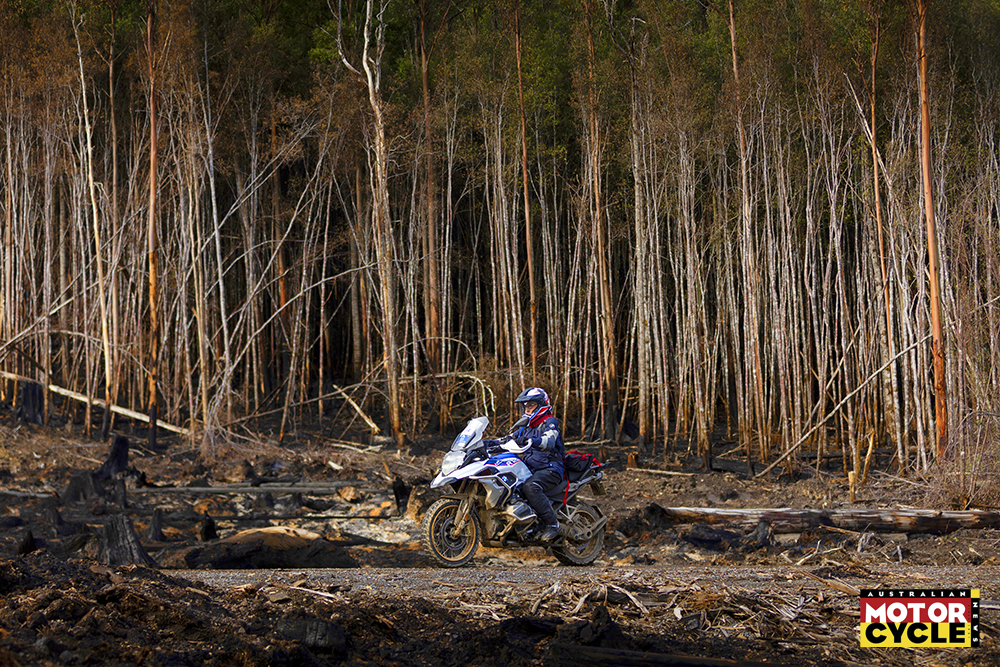 So after a stop at Wynyard to warm up, dry out and fuel up, we headed towards the historic mining town of Corinna and the barge across the Piemann river. Corrina sits on the end of the largest temperate rainforest in Australia and the whole area is one of the most beautiful and remote places I’ve ever encountered. 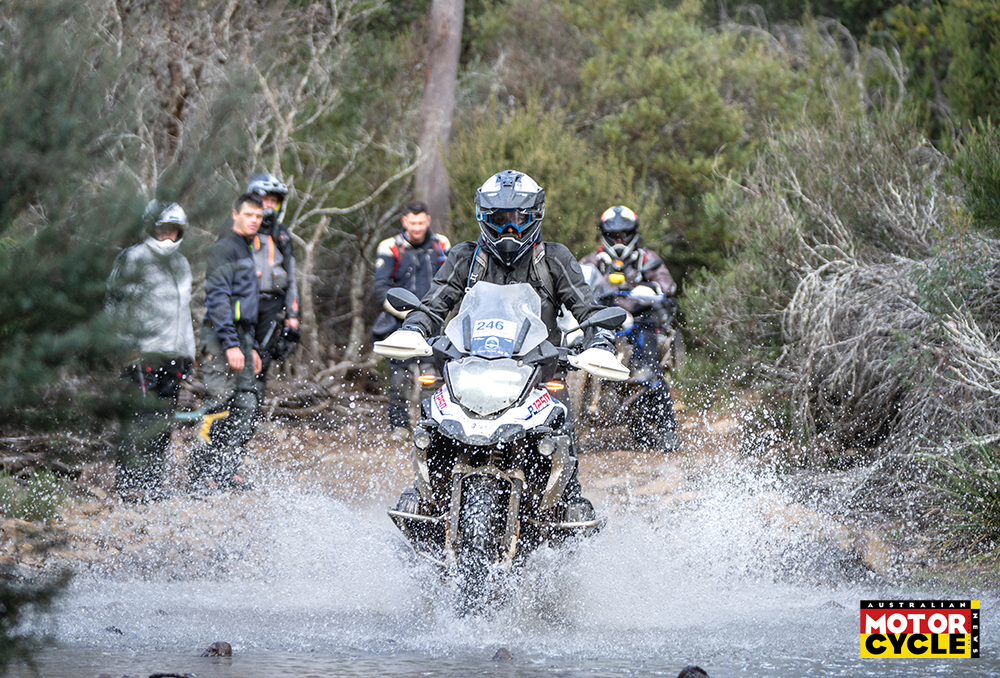 After a couple of days on the road and a splash of social lubricant you find yourself really drawn in to the GS world during the evenings, and there’s a genuine concern for your fellow riders and their machinery. Unfortunately, day two claimed another scalp with that beautiful original R 80 G/S hitting the deck. Rider okay, R 80 not so much. I found out after the event that the bike was carted to a Tassie BMW dealer to be repaired, while the bike’s owner purchased a brand-new R 1250 GS to get back home. 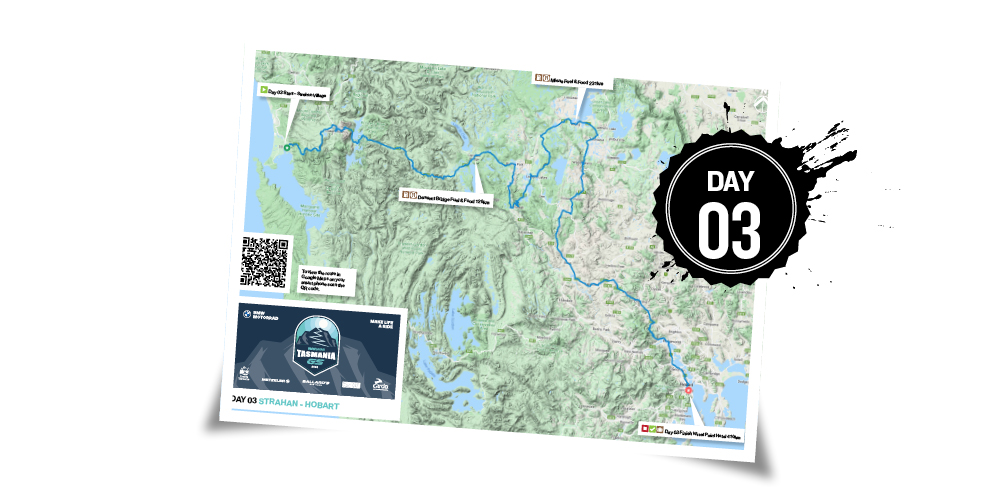 Day three started with an early morning strop along the beach and a lightly busted Triple Black after a disgraceful dismount on the sand by yours truly. The route back to Hobart took us through Queenstown and the road climbing up Mount Owen is as good a piece of bike road you’ll ever find. 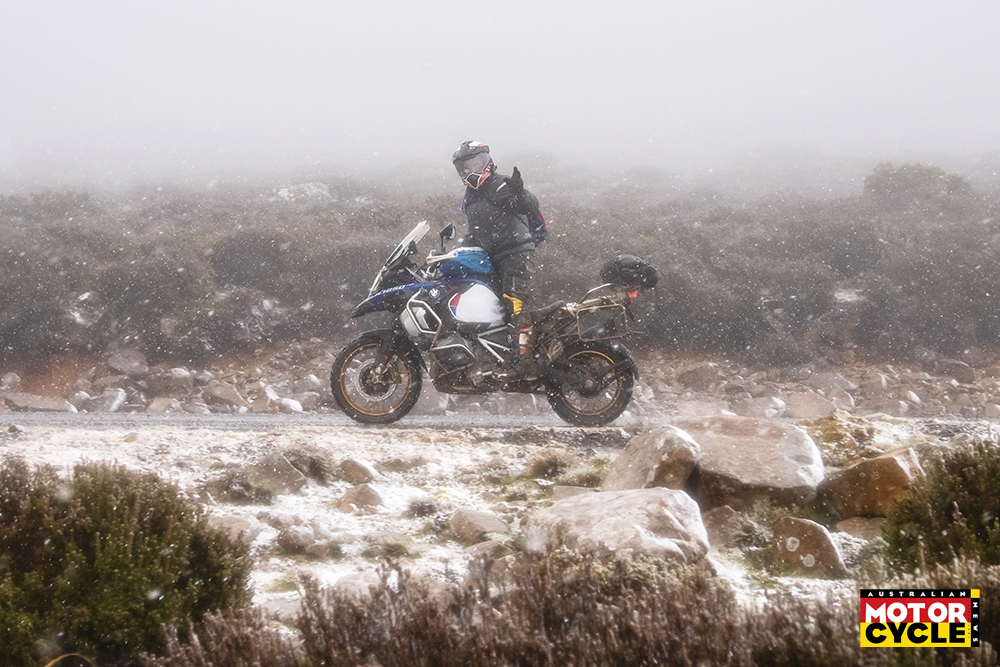 The rain was even heavier and the temperatures even lower as we headed for the first stop at Derwent Bridge. The rain had caused some issues with some of the off-road sections, so the original route was altered, and alternative road routes were offered after the Safari crew deemed the sections ‘way too hairy’. ‘The crew’ consists of off-road guns and all-round top blokes, Shane Booth, Chris Urquhart and Miles Davis. So if these guys reckon it’s ‘too hairy’ then it probably is.

With the rain soaking me to the skin despite the best efforts of my gear, I was rather happy to arrive back in Hobart and the swank accommodation that comes as part of the GS Safari package. I was disappointed not to be pushing on for the last couple of days with the a group – and a bike – I’d become rather fond of. 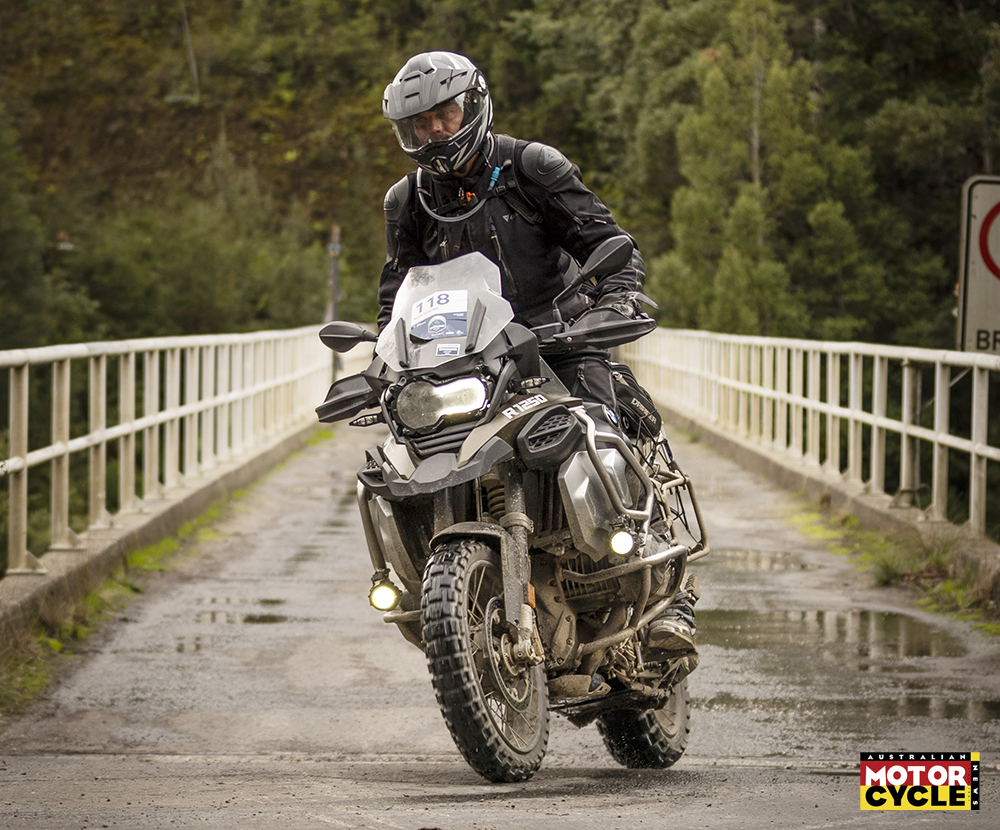 Hands down the GS Safari is one of the best things I’ve ever done. If the idea of rocking up and riding without the hassle of dragging your gear around appeals, then it’s the go if you own a GS. The Safari team is a well-oiled machine, everything is planned meticulously and while it’s certainly an adventure ride, the team try to avoid circumstances that could cause total carnage. 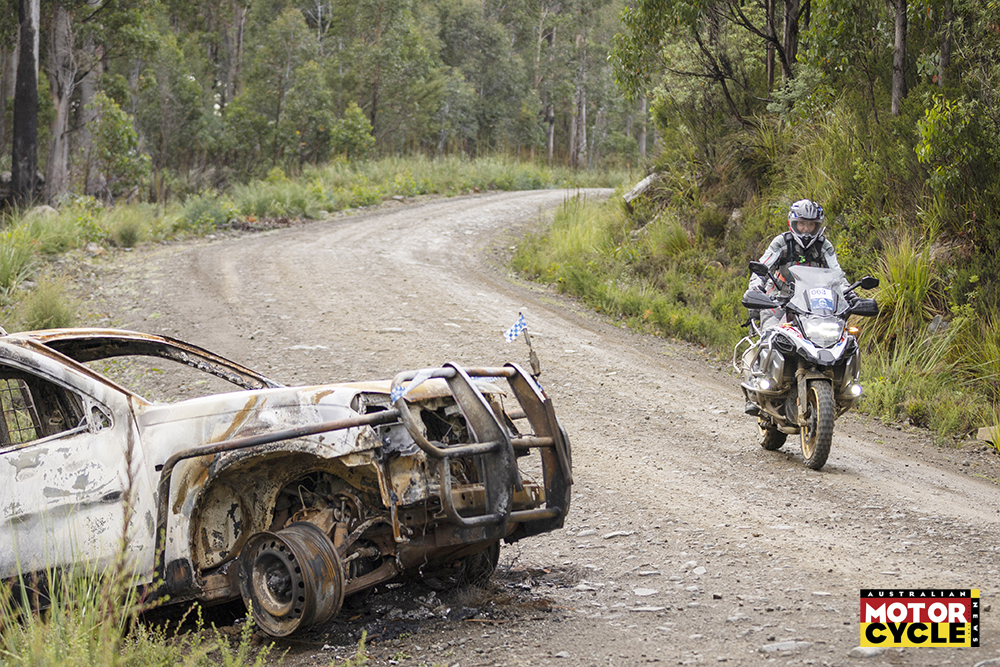 With different routes available, the Safari is a possibility for riders of any skill level, and the mate-ship that grows with each day means you’re rarely alone if you do get into strife.The 2022 event had a solid splattering of Safari virgins, but many of the participants have done multiple events and you can hear mates planning for the following year around the bar each night.

The Safari has become so renowned that riders from overseas are coughing up the cash and travelling halfway across the globe to get a piece of the action. If you own a GS of any flavour, and haven’t done a GS Safari yet, you’re missing out of one of the great motorcycle events. I’ll be willing to resort to fisticuffs to be on the 2023 Safari.