True or false? When the Young Guns Speed Shop in Switzerland built a custom Indian Scout that makes 150kW, they named it after a headless chook…

A headless chicken earning $50,000 a month, a female racer beating up on the boys, and an Indian Scout with a 1:1 power-to-weight ratio. These are not stories plucked from an episode of Ripley’s Believe It or Not. They’re all true and form the foundation of one incredible machine that took home top trophy at its first race meeting.

So what’s all this business about a headless chicken? Well, in 1945 a Utah farmer cut the head off a chook that was meant to be dinner but lived another 18 months. The headless chook became known as Miracle Mike and travelled the carnival circuit around the US earning his owner the equivalent of a staggering $50K a month. Inspired by the fun and freaky fame of this creature, the Young Guns named the Scout in its honour and fitted a race plate with the number to commemorate how many months Mike survived without a head. 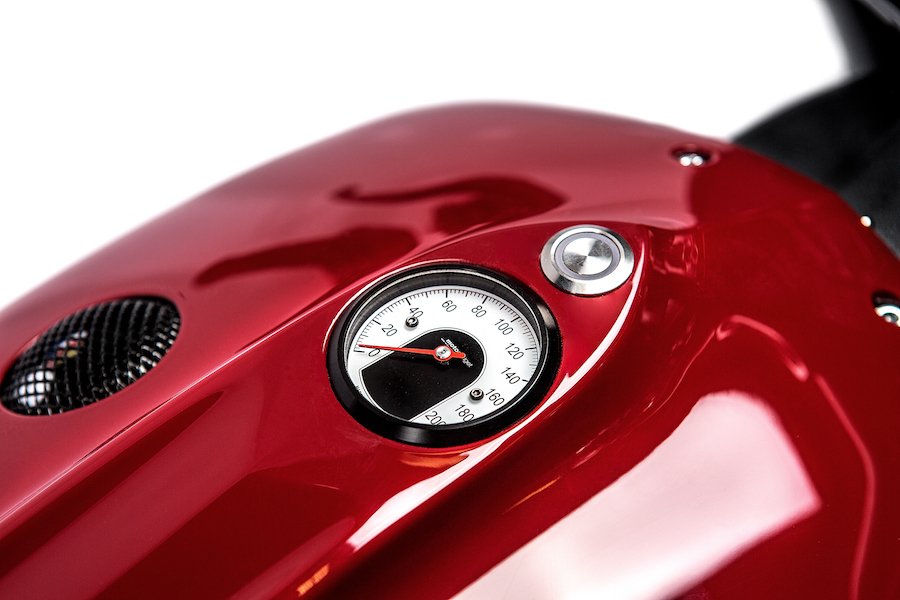 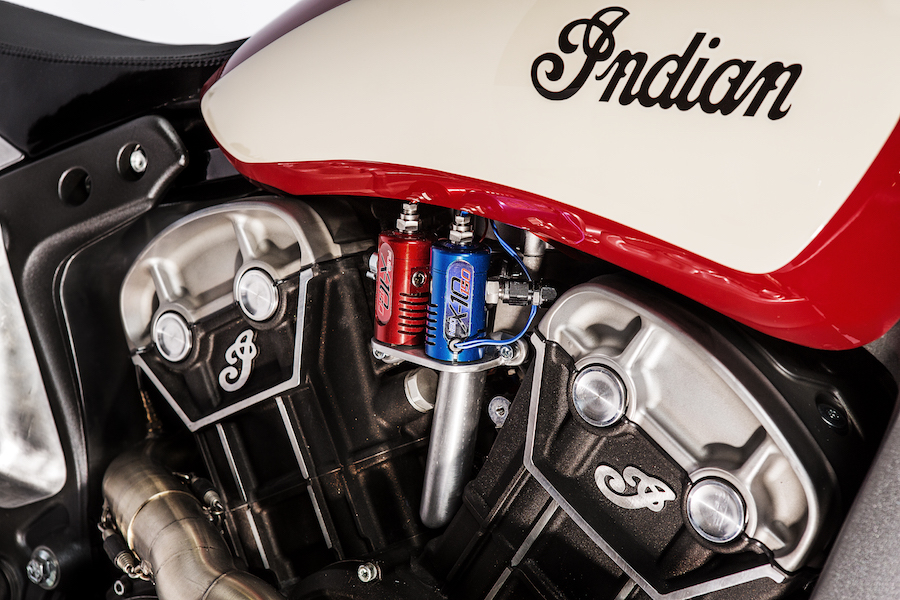 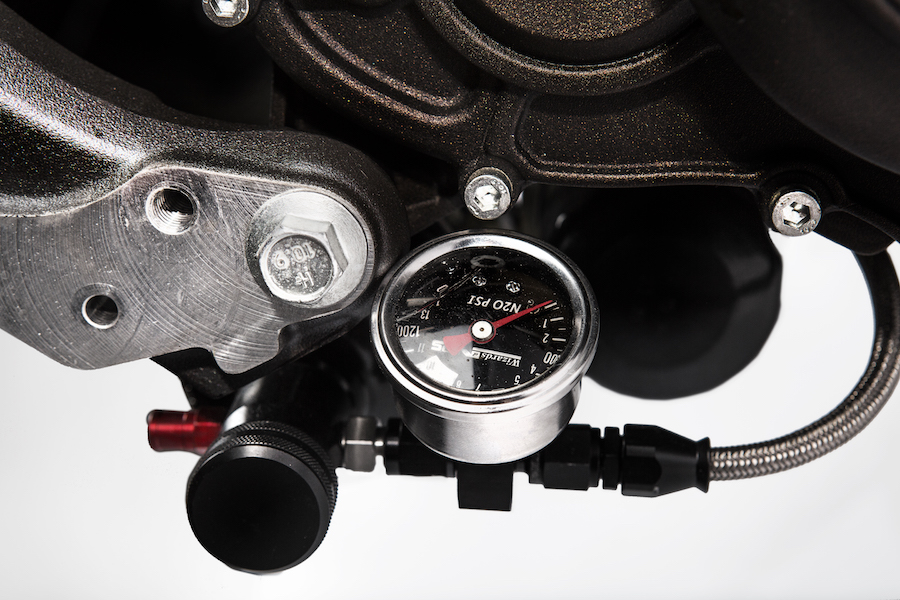 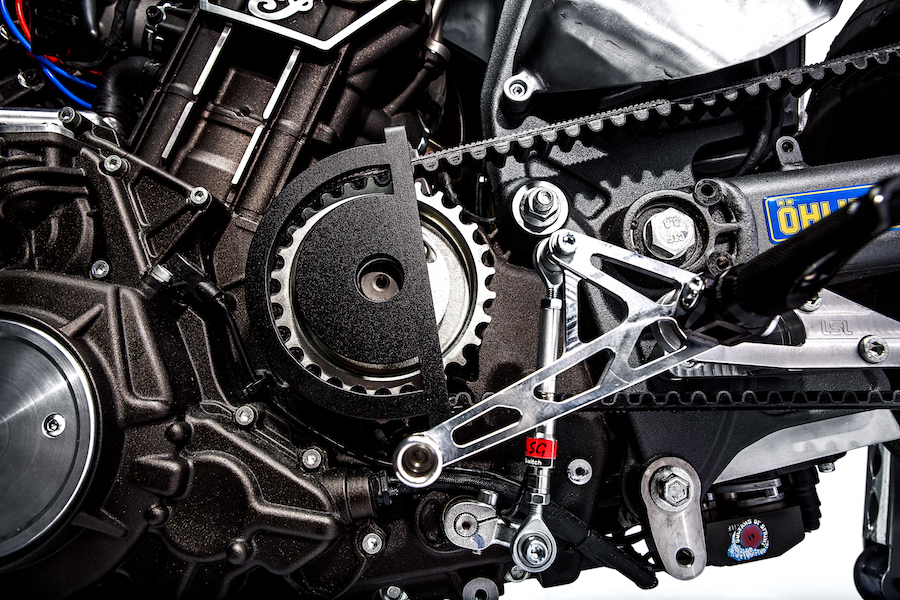 With the contracts signed and the brand-new Scout sitting in front of them, the team began the tear-down process in earnest.

“We wanted to build a bike which can keep up with serious sportbikes like the BMW RR but still use the original frame and engine,” Nik explained.

Saving weight is easier than making horsepower, but this build would require both to deliver bulk performance. The stock tank was pulled from the bike and totally gutted – it would no longer hold the go juice – and was narrowed by 12cm. Immediately this saved weight and gave the bike a more svelte look that was carried on rearward. The entire subframe is a Young Guns creation that was modelled on Nik’s KTM dirtbike.

The new seat continues the dirtbike theme with the custom trimmed piece finishing out in a sharp alloy tail. But it’s what lies beneath that is key to transforming the Scout and helping to get the power down to the ground. Shifting the weight closer to the rear wheel, the guys fabricated a custom alloy tank that is filled by lifting the seat. As considerably less capacity
is required to run the strip, there’s
also room for the battery, all hidden by two alloy side covers. Left in bare metal, they make for a beautiful contrast with the classic Indian colour scheme applied up front. While the boys worked on the chassis, they sent the engine out to horsepower gurus Swissauto. The 1133cc American muscle makes a lazy 75kW from the factory and this would need to be almost doubled to get the job done. The idea was to run nitrous, so the engine was built with giggle gas in mind: solid internals, high-flowing heads and precision engineering. To improve cooling and save weight, a friend of the shop fabricated an alloy radiator while the Young Guns made the custom piping to fit.

With the engine back from Swissauto and in the chassis, the exhaust was mocked up with careful consideration given to the location of the O2 sensors; precise tuning was vital to the final product. The system saves a chunk of weight over stock and it flows considerably better, with the finishing touch a very sportsbike-like Akrapovič muffler.

To finish out the fuelling system, Wizards of NOS supplied a wet nitrous-oxide system that delivers both the N₂O and extra fuel to prevent catastrophic lean outs. To overcome the burden of the stock wheels on the bike’s unsprung weight, a lightweight Excel Supermoto rim was fitted to the stock rear hub while the front wheel comes from an R90.

By the time the Young Guns were finished, the Scout had shed nearly 50kg with a final weight of 198kg fully loaded. And after serious tuning work and two solid days of power runs, a mammoth 185 ponies were found at the back tyre. Even accounting for drivetrain loss, that’s an easy 150kW at the crank – making this the first Indian Scout to reach the magic 1:1 power-to-weight ratio.

Then, when the team arrived at the Essenza sprint races, they pulled a swifty on the crowd by putting former 250cc GP rider Katja Poensgen in the saddle. She blitzed the field, earning Indian and Young Guns Speed Shop the top trophy. Once again Miracle Mike had all and sundry running around celebrating like headless chooks!