He was a gentleman, a racer, a professional and the first global superstar of Grand Prix racing

Six times World Champion and six times TT winner Geoff Duke OBE passed away peacefully on Friday, 1 May 2015 at his home in the Isle of Man at the age of 92. Duke was the first rider to win three successive World Championships – the 1953-55 World titles on four-cylinder Gileras – and also the first to win two in the same year, when he won both the 350cc and 500cc world crowns in 1951 on Norton Manx singles.

In the 1950s, Geoff Duke was a household name all over Europe and Britain’s Commonwealth thanks to his good looks, stylish riding, polite manner, and especially his success in defeating the four-cylinder Italian Gileras and MV Agustas to win the first three of his six World titles on much less powerful but better handling Norton singles.

Duke’s career linked the last victories of the bellowing British singles with the four-cylinder flowering of the Italian multis. 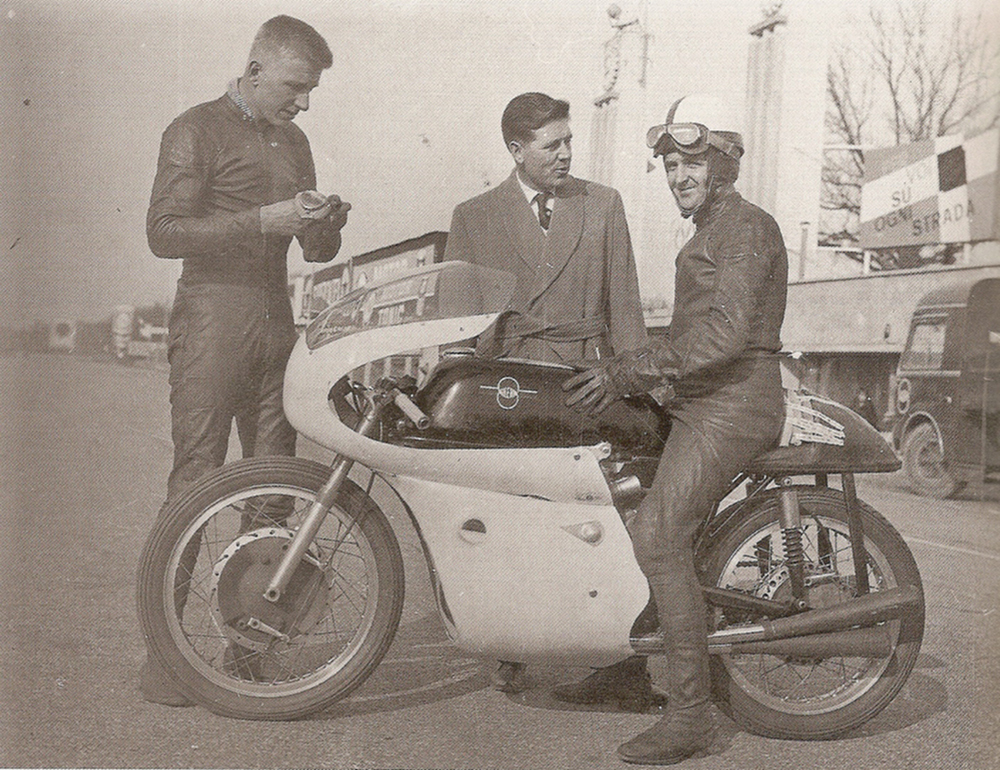 These were glory years for GP racing: all grit, good fellowship and hard riding, tents in dusty paddocks at long and dangerous circuits and bonhomie at the bars of the local hotels.

Duke, always photographed wearing either leathers or a neat coat and tie, was a gentlemanly competitor, but not a gentleman racer, utterly dedicated and deeply professional. Examples are many: he first realised the advantages of skin-tight one-piece leathers and he perfected the tucked-in, neatness-is-all riding style so unfashionable today.

Thanks to the resentment by Norton’s directors that he would be earning more than they did if they paid him what he was worth, he transferred to Gilera for twice his pay at Norton, and swiftly turned its fast but unruly fours into unbeatable machinery that took him to three more 500cc World titles. It could have been more, but for injury and the six-month ban imposed on him by the FIM for supporting a strike by hard-pressed privateers for more start money at the 1955 Dutch TT at Assen. 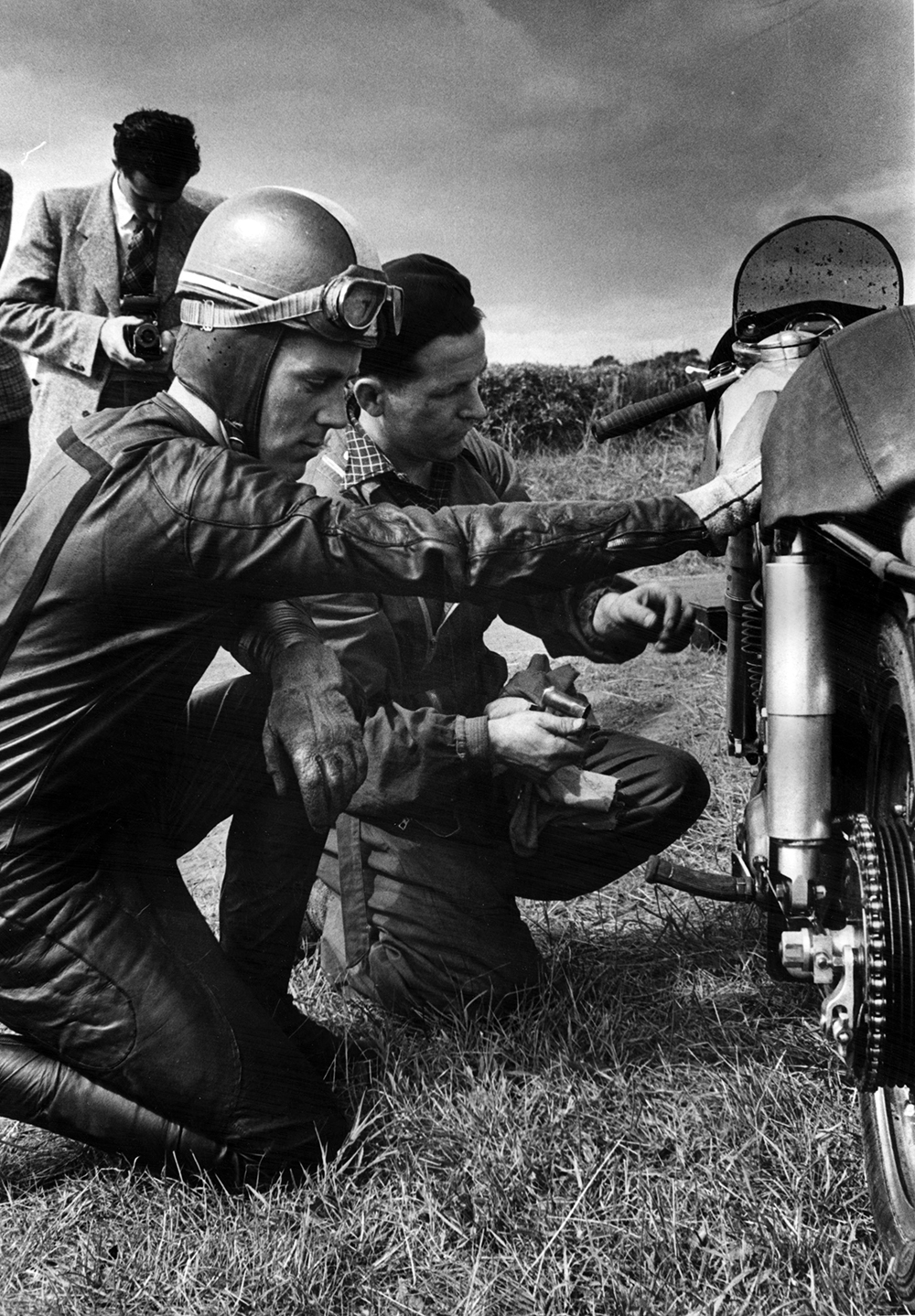 1st September 1951: Geoff Duke who won both the Junior and Senior World Grand Prix Motorcycle Championships checks his Norton machine before the start of a race at Ulster. He is No. 1 rider in the Norton team. Original Publication: Picture Post – 5395 – Duke Does It Twice – pub. 1951

Geoff’s hopes of winning the 500cc world title for a first time were dashed when his Dunlop tyres threw off their treads at both Assen and Spa. Victories in the Ulster GP and the Italian GP at Monza, where on his much slower single he defeated the four-cylinder Italian bikes on Gilera’s high-speed home track, meant that Duke lost the title by just a single point to Gilera rider Umberto Masetti. But the following year the tables were turned, and Geoff Duke became World champion in both 350cc and 500cc classes for Norton, winning both the Senior and Junior TT races, too. He retained the 350cc World title in 1952 with a clean sweep of all four GP races – including the Junior TT – but the 500cc Norton was by now seriously outgunned by the Gilera fours.

World Champion status earned him acclaim outside motorcycle racing and Duje was voted Sportsman of the Year by BBC listeners and he received an OBE in 1953.

After a brief but unsuccessful stint with cars as a member of the Aston Martin works team in 1952-53, which he combined with racing motorcycles, Duke made a shock switch to his Italian rivals – as momentous as Agostini swapping from MV Agusta to Yamaha in 1974, and Rossi from Honda to Yamaha in 2004. Duke took a hat-trick of 500cc World titles with Gilera, having improved the handling of the fast but wayward Italian four-cylinders, using his knowledge of the slower but better-handling Nortons. 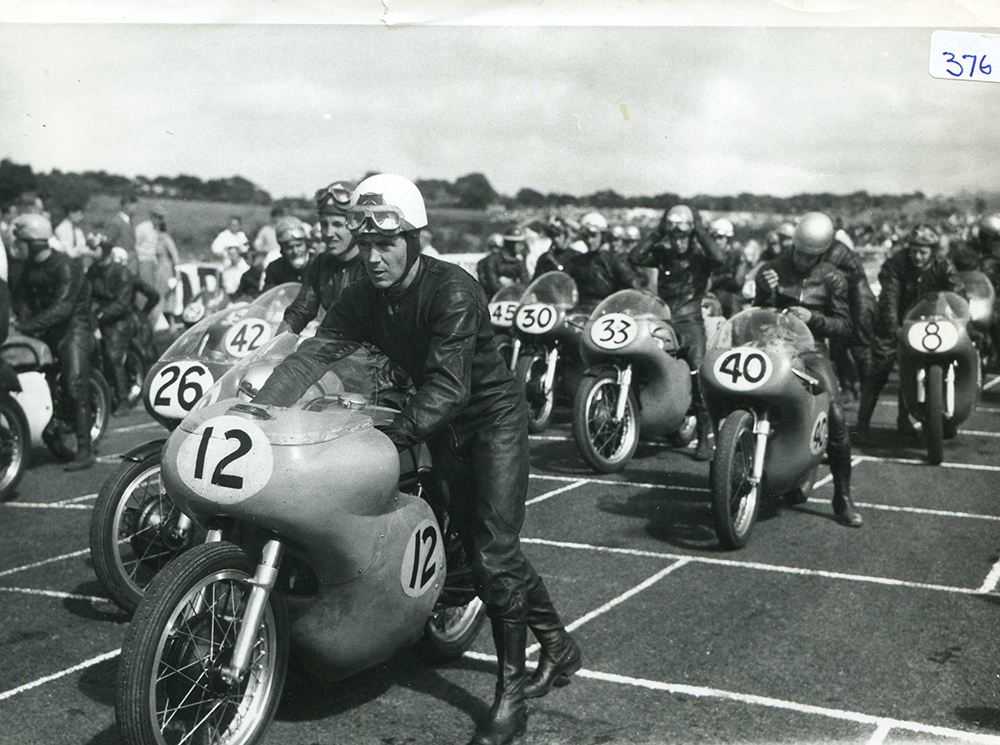 Geoff’s career was interupted by a six-month ban from the FIM at the start of 1956, after he and Gilera teammate Reg Armstrong supported a rider’s strike at the1955 Dutch TT at Assen. Although a new rule forced organisers to pay all riders starting a GP a much higher sum, Duke’s reward for helping bring this about was suspension for the first half of the next year, leaving him unable to defend his 500cc World title: unthinkable today.

After this, Duke’s racing career tailed off, partly because of the ban, partly through unreliable engines, and partly because of an injury sustained at Imola early in 1957. Teammate Libero Liberati regained the 500cc World title for Gilera, whereafter the Italian firm shocked the world by withdrawing from racing, along with other Italian works teams from Moto Guzzi and Mondial, between them winners of all four 1957 World Championship titles.

This left Duke without a ride and although he raced a BMW Rennsport for the German factory in four GPs during 1958, he couldn’t adapt to the unusual handling of the shaft-drive flat twin. Reverting to privateer Nortons, he won the last two of 33 Grand Prix victories in his 10-year racing career at Hedemora, winning both the 350ccc and 500cc Swedish GPs in 1958. 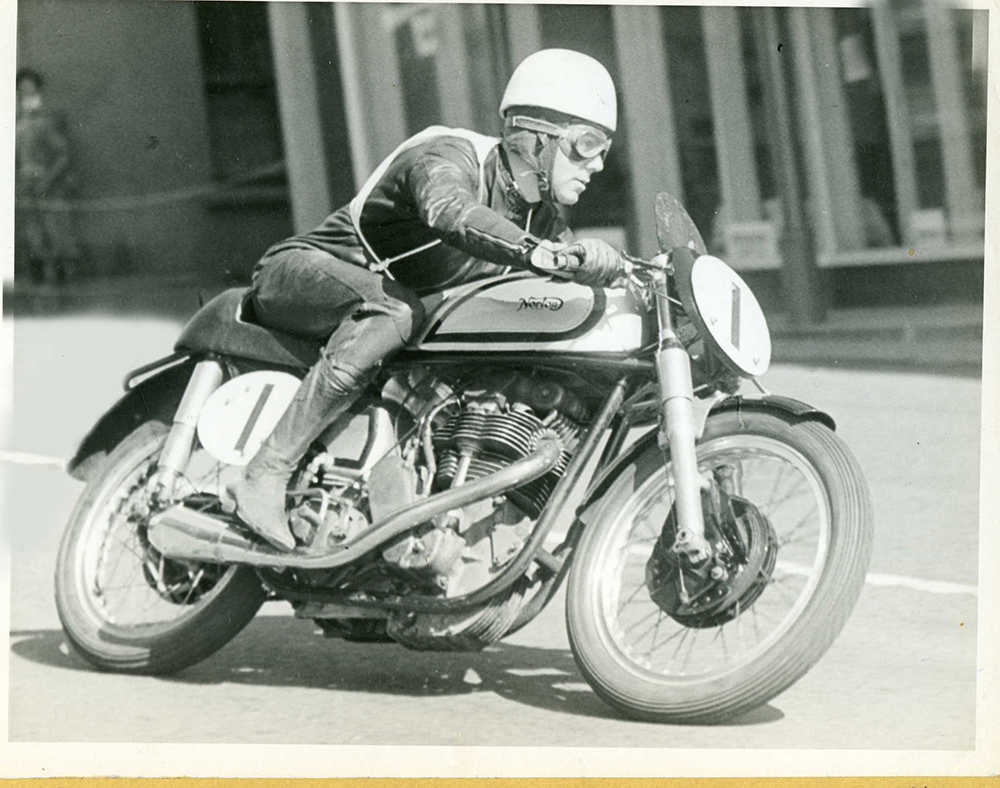 He continued for one more season with privateer Nortons and a 250 Benelli single, retiring after the Italian GP that year where he earned third place on his 500cc Manx Norton. After winning three races in one day at the non-championship meeting in Locarno in Switzerland the following week, Duke retired from motorcycle racing. A brief, unsuccessful attempt to revive his car racing career ended with a bad crash in Sweden, so Duke became a hotelier in the Isle of Man, where he lived until his recent passing.

In 1963 he was lured back to the GP paddocks, persuading Mr Gilera to resurrect the four-cylinder 500cc racers which last competed in 1957, in order to provide MV Agusta’s sole rider Mike Hailwood with some competition. He formed a racing team with Derek Minter and John Hartle riding. Victory came early with a 1-2 success ahead of Hailwood at the prestigious Imola Gold Cup non-championship race. But  Minter crashed a Norton at Brands Hatch and was seriously injured, causing Phil Read to be signed to replace him. A 1-2 Gilera victory in the Dutch TT was the only time the team’s elderly bikes got the better of MV and its star rider, and at season’s end team Scuderia Duke was wound up. 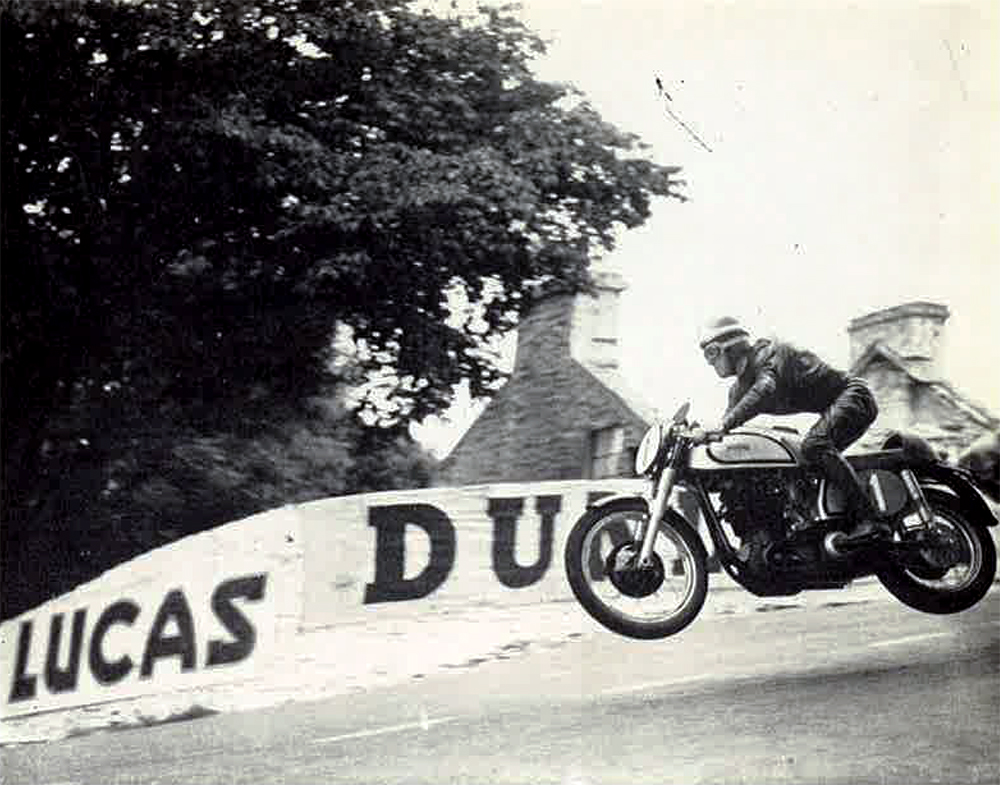 Geoff then became involved in various companies based in the Isle of Man, such as a scooter rental business, a car dealership and a boat company, and was instrumental in setting up the Manxline company that introduced the first roll-on, roll-off ferry service to the Island. Later, his son Peter founded Duke Video, at one time the world’s largest publisher of motorsport videos.

Geoff Duke was the supreme racer of his generation, an impeccably behaved, always polite and invariably well-presented patriot who, to foreign enthusiasts, was the quintessential Englishman. His love of Italy and its people was reciprocated in full, and his contribution to the sport as it struggled to gain acceptance in the postwar era cannot be overestimated, for he, more than anyone else, was responsible for putting two-wheeled road racing on the global map.

Every era has its giant, but few cast a shadow as large as Geoff Duke. 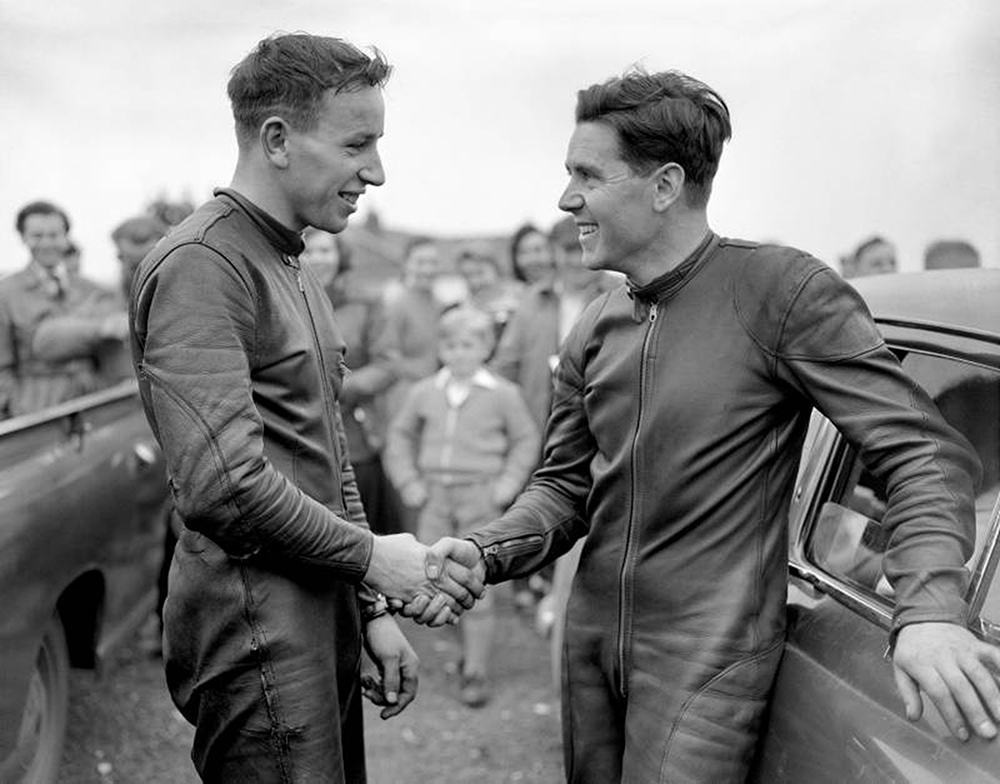 Duke (right) meets John Surtees, who topped his bike title tally by one – and also claimed the Formula One car title too – the only man to have won crowns on bikes and in F1