The Ducati Multistrada V4 Pikes Peak is the sportiest Multistrada ever and with a starting price of $44,500 it's also the most expensive

The third episode of the Ducati World Première 2022 was dedicated to the online reveal of the new Multistrada V4 Pikes Peak, namely the model that best represents, since its debut in the range, the true essence of sportiness within the Ducati dual bikes family. The Multistrada V4 Pikes Peak takes centre-stage for a public of passionate enthusiasts not only as the sportiest Multistrada ever but also as the most powerful model in the whole crossover segment.

The Multistrada V4 Pikes Peak takes life around the excellent Multistrada V4 platform: where performance, smoothness of operation and reliability offered by the V4 Granturismo engine, together with the contained weight, the ease of handling, the comfort for rider and passenger alike, state-of-the-art equipment and electronics are part of the cornerstones of the Multistrada V4 family.

Starting from these solid foundations, the new V4 Pikes Peak was developed by introducing significant changes in terms of chassis set-up, premium ergonomics, electronic controls as well as numerous dedicated components, which give the bike a distinctly sportier attitude compared to the Multistrada V4. Ducati, once again, promises to delight a wide range of riders looking for the purest performance within the dual bikes universe. 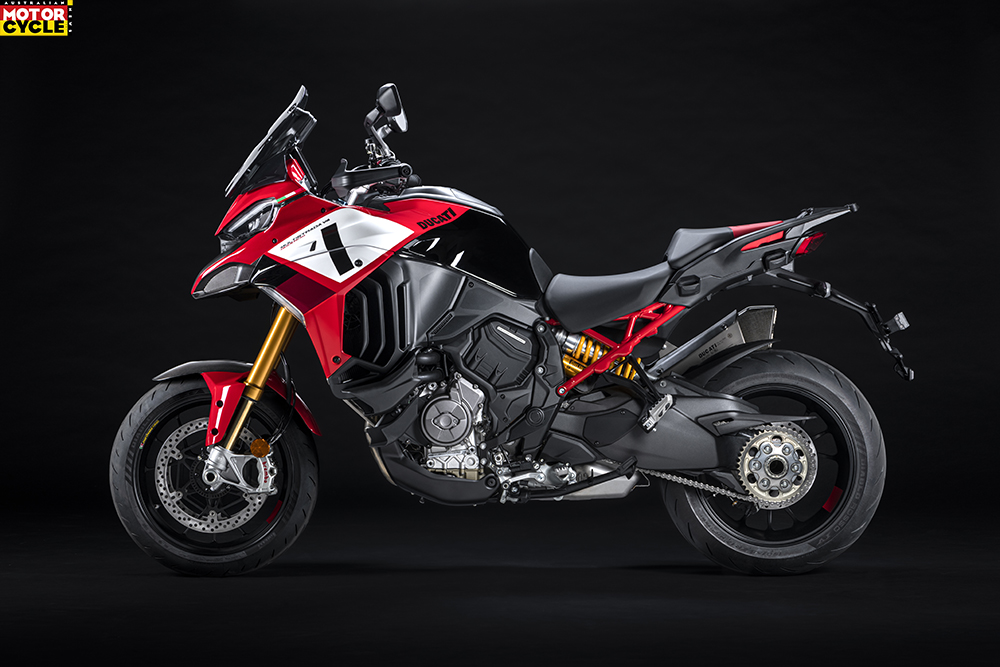 The design work behind this new project develops starting from the peculiar elements of the Multistrada V4 family, integrating them with the two elements that mainly identify this Pikes Peak version from an aesthetic and functional perspective, namely the 17” front wheel and the

single-sided swingarm. The racing soul of the bike is intensified by the dedicated “Pikes Peak” livery, faithfully inspired both in colours and graphics by that of the Desmosedici GP ’21; even the number plates on both sides of the fuel tank contribute to highlight the deep link with the world of competitions. 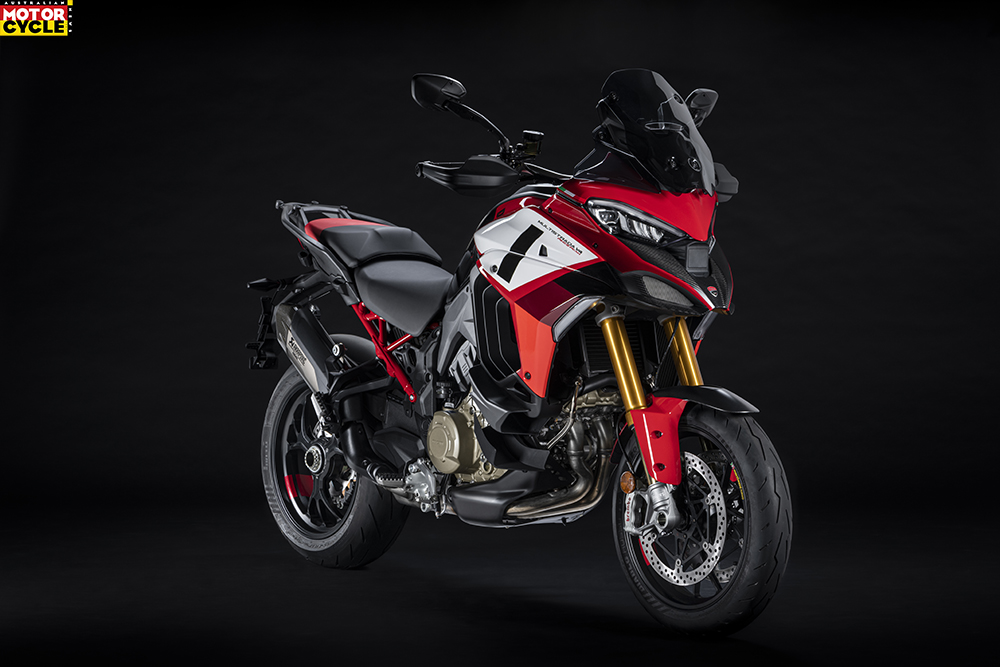 With the aim to further emphasise its sporty-oriented attitude the new Multistrada V4 Pikes Peak comes with a wide range of components made of carbon fibre in addition to the Akrapovič titanium and carbon silencer (road-approved). Other distinctive aesthetic elements are the low smoked plexi, Öhlins front fork anodised gold legs, two-tone Black and Red rear saddle embellished with the V4 logo and the Ducati Corse badge applied to the “beak”.

The chassis compartment of the new Multistrada V4 Pikes Peak is part of the revolution. With the respect to the Multistrada V4, it has in fact been significantly revised. First and foremost, it has been developed around the 17” front wheel, which ensures the rider great precision and responsiveness. The new machine is fitted with sports road tyres (sizes: 120/70 front; 190/55-17 rear) and mounts Marchesini forged aluminium rims, 2.7 kg lighter than those of the Multistrada V4 S, which make the dynamic behaviour of the vehicle, therefore, more effective and contribute to the reduction of the total weight amount of 4 kg compared to the Multistrada V4 S (check out our full test of the Multistrada V4 S here). Additionally, Öhlins Smart EC 2.0 suspension also guarantees brilliant performance in sports riding, through the use of an “event-based” mode, the same adopted by the Panigale V4 S and the Streetfighter V4 S, which automatically adjusts the setting according to the user’s riding style. 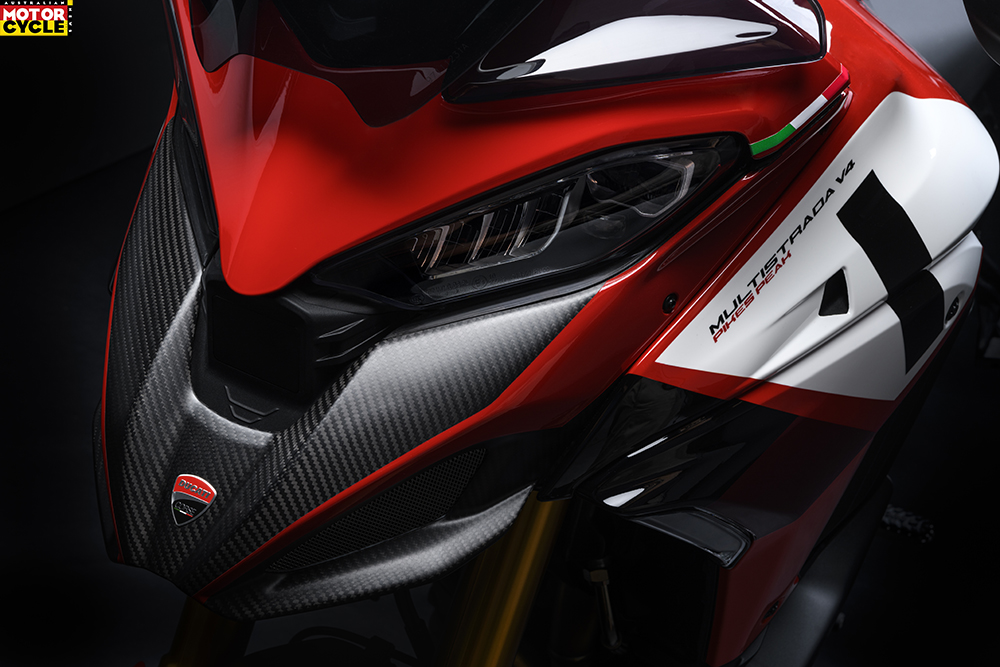 The aluminium monocoque frame has been refreshed with the precise objective of achieving a different inclination of the steering head (25.75° compared to the 24.5° of the Multistrada V4), not to mention that trail and wheelbase geometry have been recalibrated according to the different uses of the motorcycle.

The braking system of the new V4 Pikes Peak is at the top of the segment and derives directly from that of the Panigale V4. At the front, the system includes 330 mm diameter discs and Brembo Stylema monobloc calipers, like the Multistrada V4 S, to which are added the pads of the Panigale V4. At the rear, the system features a single 265 mm diameter disc with a Brembo floating caliper. 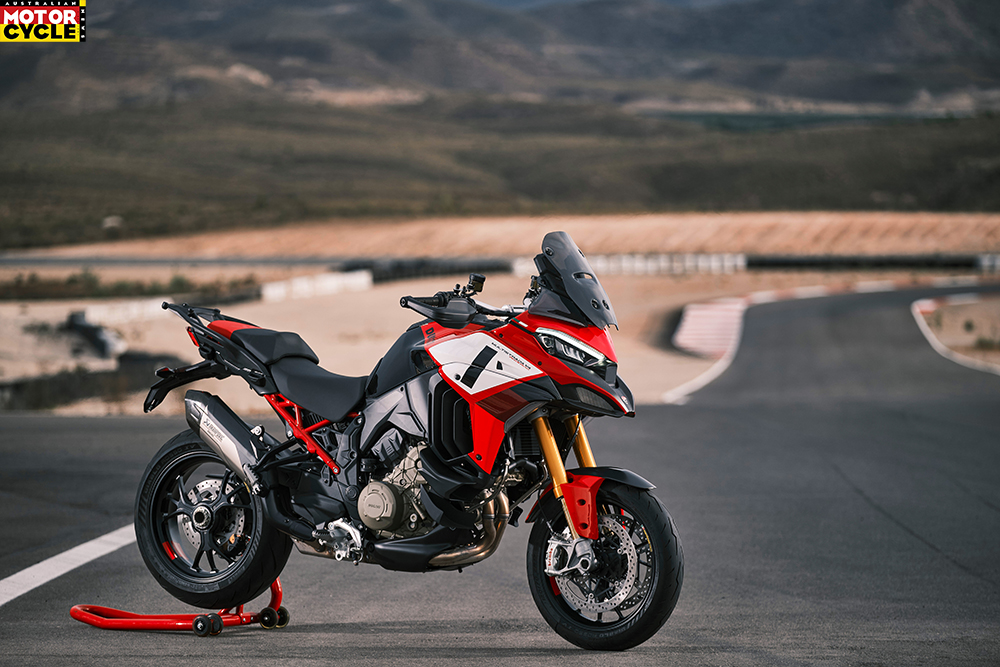 The new Multistrada V4 Pikes Peak stands out even for its dedicated ergonomics, specifically designed to ensure maximum control and optimise lean angles. With respect to the Multistrada V4 the riding position has been completely refreshed: the footpegs, for example, are higher and moved back to increase the maximum lean angle, while the handlebar is lower, narrower and has contained curved bars. The final result is that the rider benefits of an even better feeling in sporty riding while maintaining an excellent level of comfort.

The new Ducati Multistrada V4 Pikes Peak is powered by the most powerful engine within the category, the admired V4 Granturismo, achieving 170 hp with a maximum torque of 125 Nm at 8,750 rpm. This engine, specifically designed by Ducati for the Multistrada V4 family, results extremely lightweight – 66.7 kg only – and compact. Thanks to these features Ducati engineers create an uncompromised equilibrium with perfect mass centralization. With a displacement of 1160 cc, the V4 Granturismo engine ensures top-of-the-segment power and torque levels. In addition, the V4 Granturismo represents also a reference in terms of versatility and reliability, featuring record-breaking maintenance intervals, with valve play checks scheduled every 60,000 km. 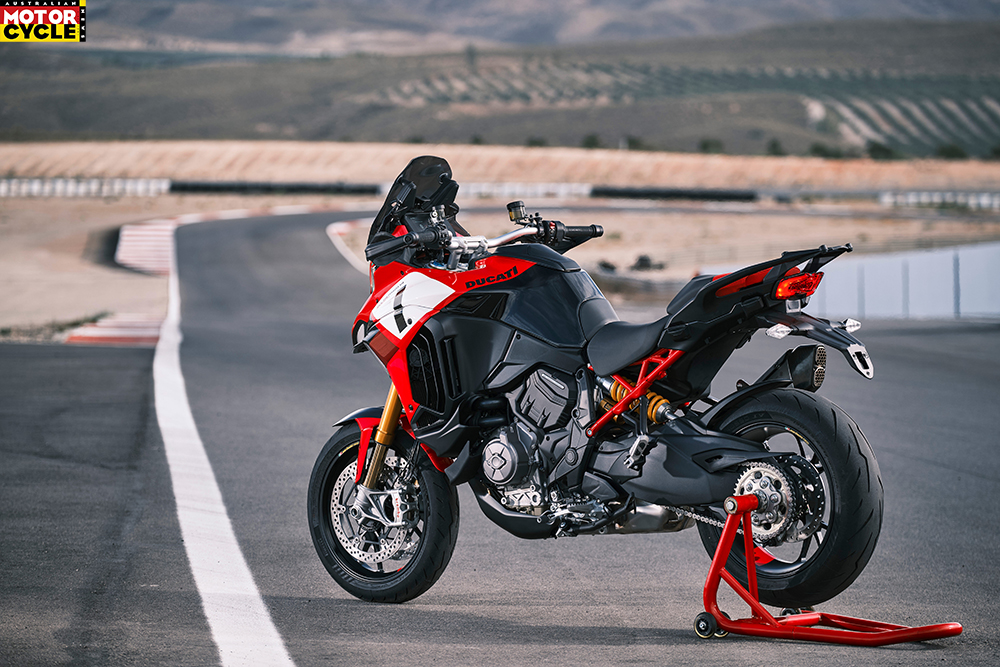 The V4 Granturismo engine has been optimised to intensify the characteristics of the bike and features some innovations. Among these, the introduction of the Race Riding Mode, which represents a first for Multistrada models. The Race option is added to a more racing strategy for the limiter, which intervenes more gradually than in the Multistrada V4, in order to alert the biker in advance and allow him a more effective sporty drive in terms of gear changes within the high area of the rev counter. The quickshifter also has a dedicated strategy that allows extremely aggressive downshifts, as well as the implementation of an even more direct throttle response in High Power Mode.

The Multistrada V4 Pikes Peak inherits the latest generation and sophisticated electronic package of the Multistrada V4 S, which includes, among others, the as-standard radar technology both at the front and at the rear, which offers Adaptive Cruise Control (ACC) and Blind Spot Detection (BSD) functionality. 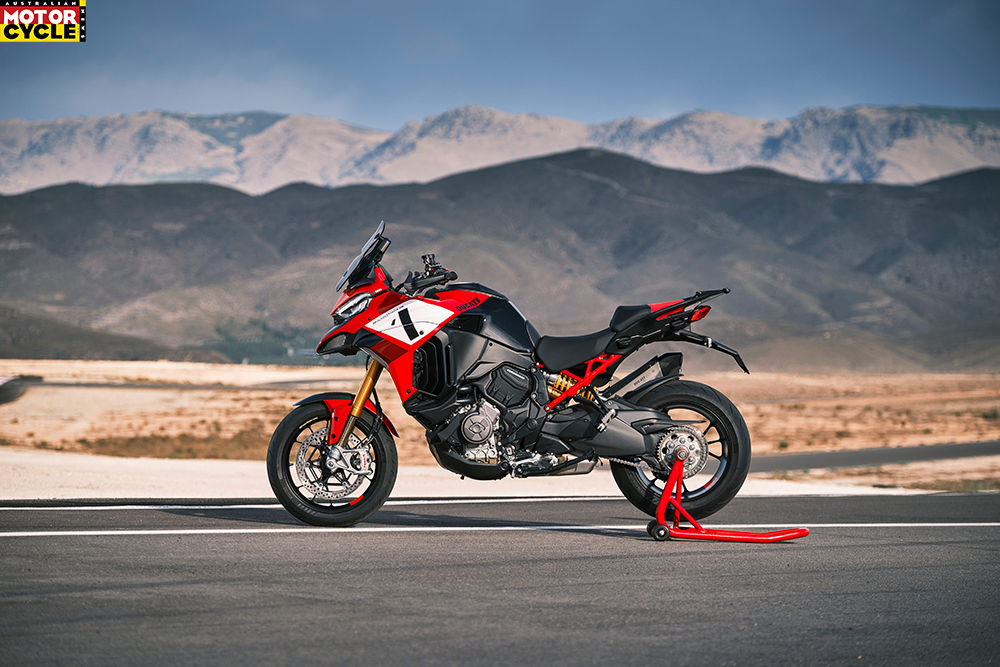 The 6.5” TFT dashboard, also available as standard on the Multistrada V4 Pikes Peak, allows the user to view the map navigator thanks to the advanced Ducati Connect system, which allows it to mirror the rider’s smartphone. Electronics innovations are, also in this case, aimed at obtaining a better sporty driving experience. In addition to the introduction of the Race Riding Mode, Ducati Wheelie Control on the Multistrada V4 Pikes Peak has an updated strategy that offers even better response and more accurate control during dynamic riding. ABS Cornering has also been configured to be safe and performs in whatever riding situation, even in the sportiest.

The Multistrada V4 Pikes Peak is a technologically advanced motorcycle, designed for those who love the thrill of sporty riding, especially on mountainous twisties or between the kerbs of a race track. The bike will be available at the Ducati dealers network starting at December 2021 in the Radar trim, which is fitted with both front and rear radar systems. 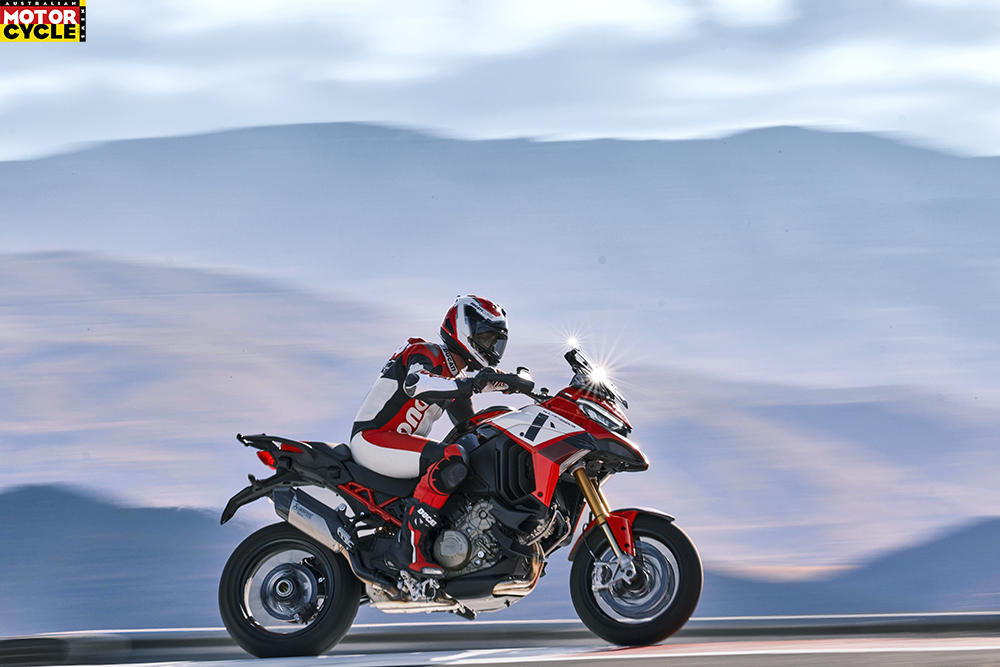 The Ducati Performance catalogue features a wide range of accessories to enhance the characteristics of the bike and make it a unique gem. 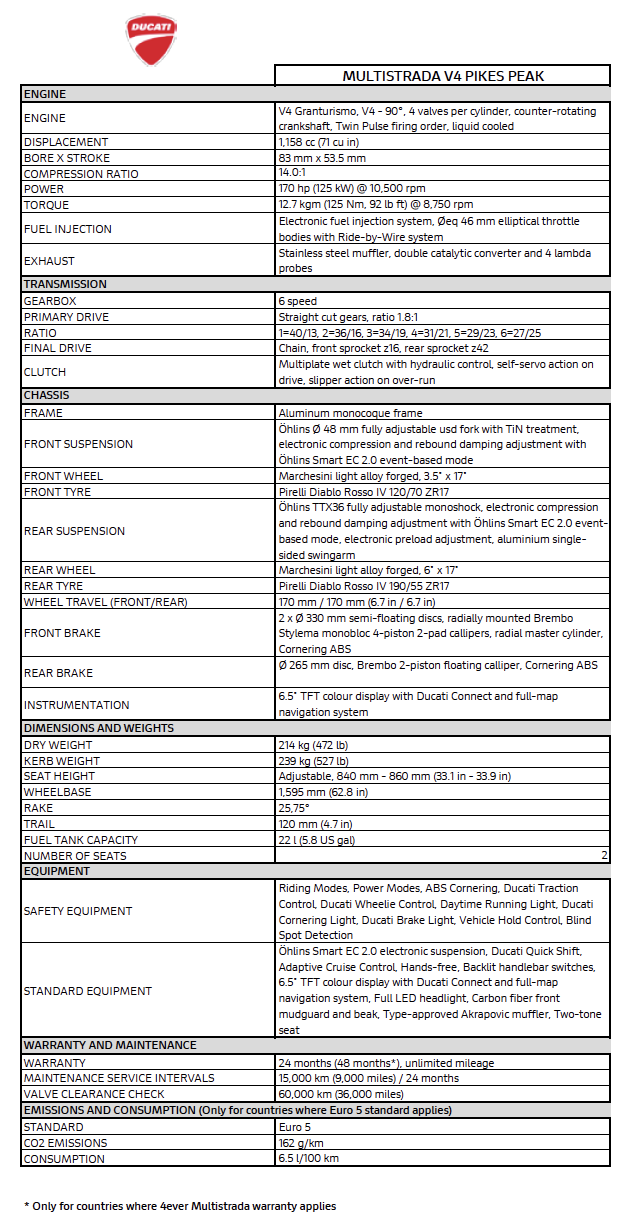 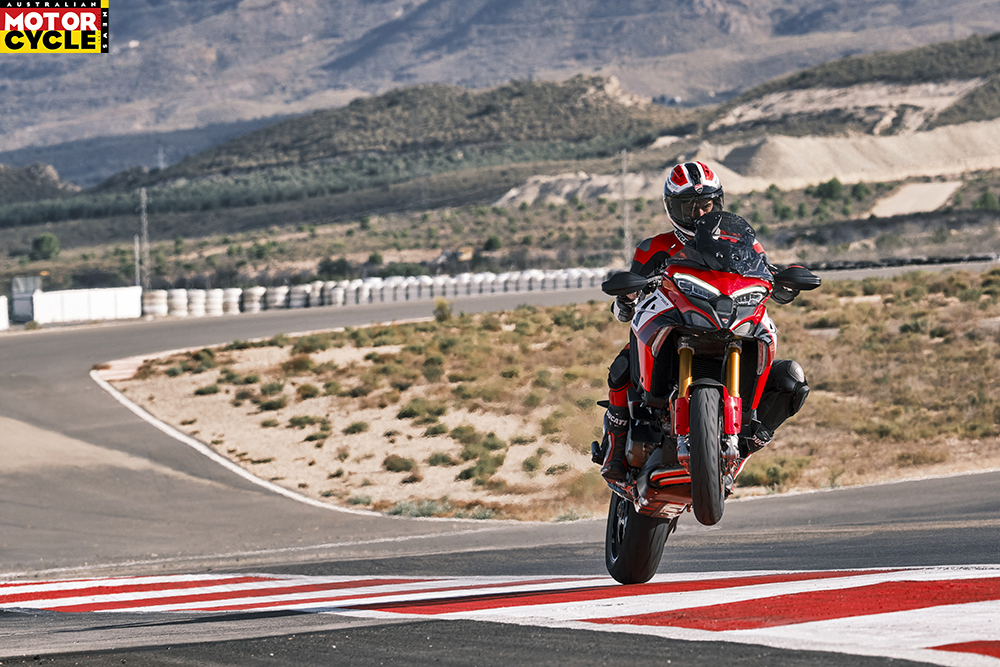 With summer upon us, you want to be able to stay as cool as possible on the bike without compromising safety. The light and short urban-style  Evo Stunt glove from Five is a top-shelf product.  Five specialize exclusively in the design and manufacture of gloves. If you’re a