My Year of Living a Bit Dangerously

I’m sure there are people out there who crave the thrill of bike racing. The types who dream about it, and picture in their mind what it will be like the next time they line up on the grid, filled with nervous excitement and surrounded by a pack of riders determined to beat you to the chequered flag. I’m not one of these people, well I wasn’t at the start of 2016, when Sean Goldhawk from Yamaha announced publicly, and much to my surprise, that I would be contesting the inaugural Yamaha YZF-R3 Cup.

The one make series was devised as an entry-level class for young racing newbies, and while I was a total newbie, Young I certainly am not.

Sean had put me on the spot, knowing I would accept the challenge. Looking back, I’m happy I did. But it would take some time before I was happy with my decision. 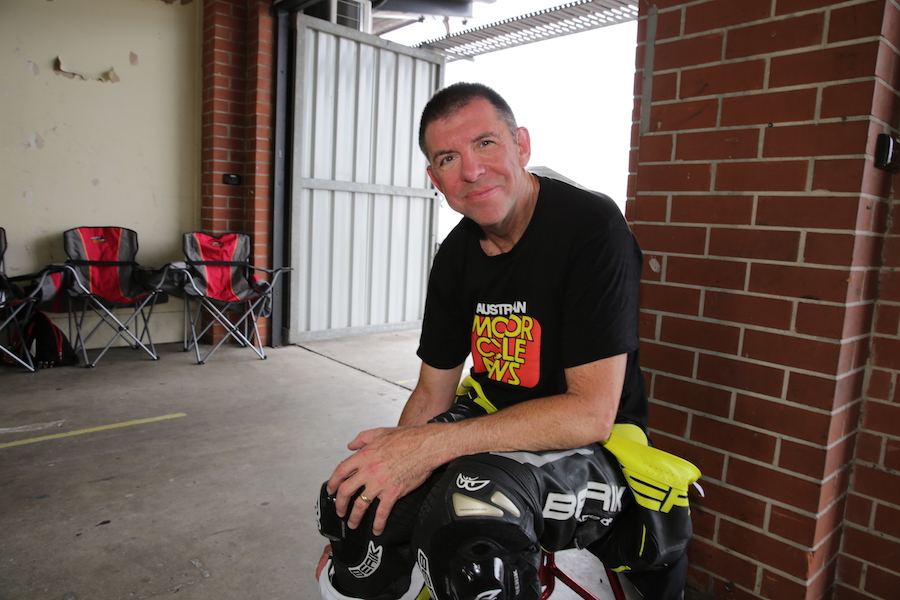 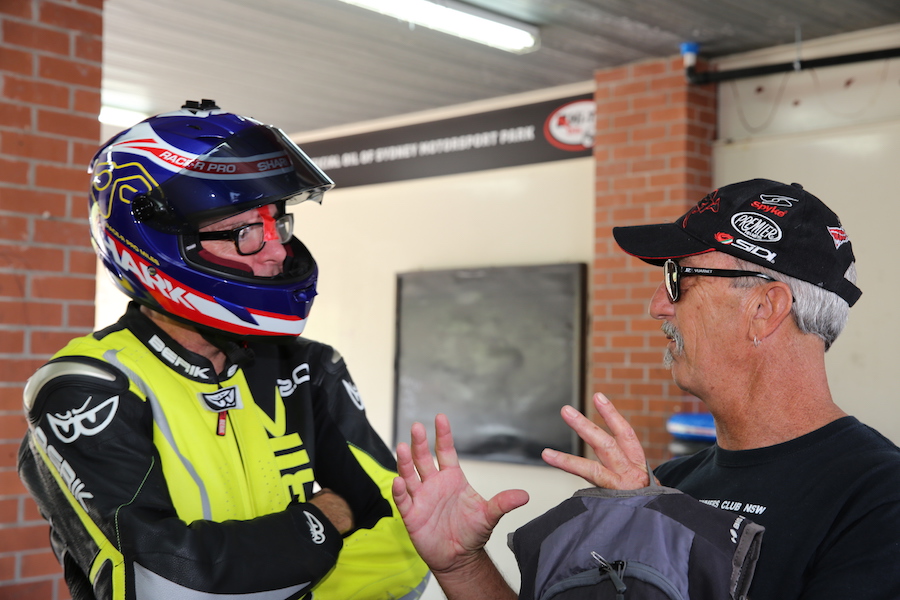 Thanks to generosity of Yamaha Australia, John Redding from YRT, and Darren Sciberras and his team at R3 Cup Race Centre Support, we took delivery of the R3 Cup Race Kit. Costing just $7900, the kit comprises a brand new YZF-R3 bike in road trim, and the full kit to convert the bike into a cracking little race bike. There was also the option to purchase the race kit for just $3630 and add it to an existing bike. While using the kit to covert an R3 roadie to a race-ready track weapon is a pretty straight forward affair, if you are as useless as I am with a spanner it’s probably best left to someone with mechanical skill, or better still get the guys from Race Centre to do it for you. The team will guarantee your race bike is ready in time for your R3 Cup debut, set the suspension to a good base point for your height, weight and experience, and will also be on hand at the race meeting if you have any last minute questions.  Race Centre also offers multiple levels of race weekend support, so if you are like me and have no friends, you can hire one for the weekend that will also double as your mechanic. Throughout the series, my friend for hire was Phil. As well as knowing his stuff, Phil also made the race weekend an enjoyable experience, offering plenty of advise and a constant stream of humorous anecdotes. I only had to turn up with my paid entry fee, bike, tyre warmers, stands, race suit and helmet and the support team did the rest. Your first couple of race meetings can be a confusing stream of signing on, scrutineering and rider’s briefings. Phil made sure I was at the right place at the appropriate time, including pit exit for each of my races. 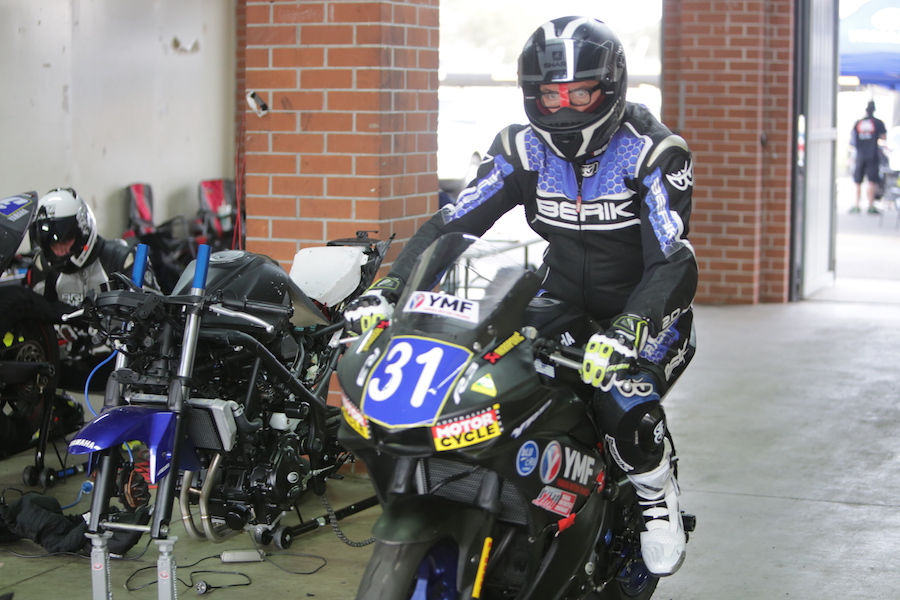 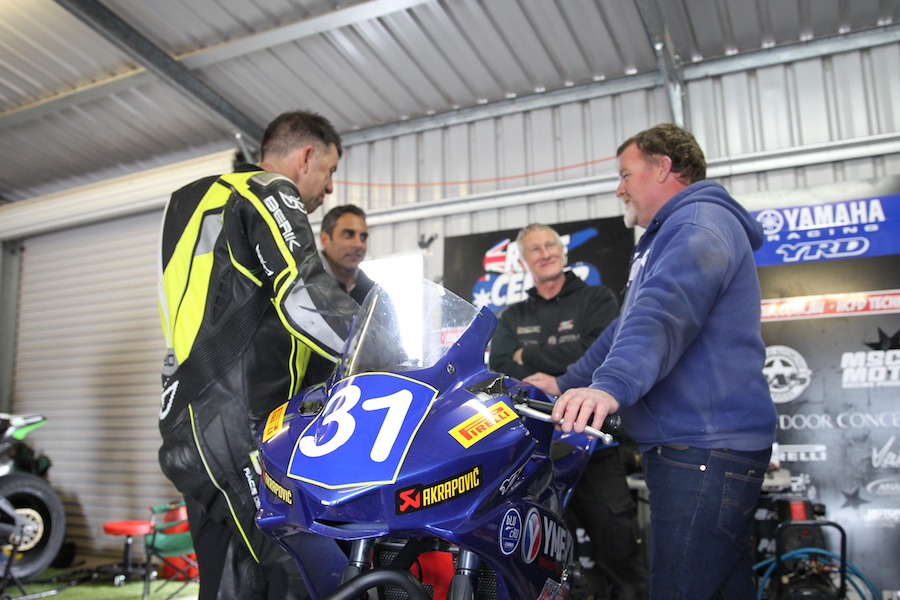 The only other thing I needed to organise was some tyres, and that’s how the guys at Link International became my first sponsor, providing me with a set of Pirelli Supercorsa tyres which turned out to be the hoops of choice for the R3 Cup. One set of tyres will easily last two meetings and practice days, possibly even three.

In a short space of time, I had gone from total newbie to factory supported rider with a tyre deal – bring on my umbrella girls! It also meant I had reached the point of no return and I nervously counted down the days until my first-ever race meeting.

Due to a few delays beyond our control, I missed the opening round of the series at Wakefield Park. Making things tougher was the lack of an official practice day prior to the Round 2, this meant I rolled into Sydney Motorsport Park on the Saturday morning of my first race meeting greener than grass. 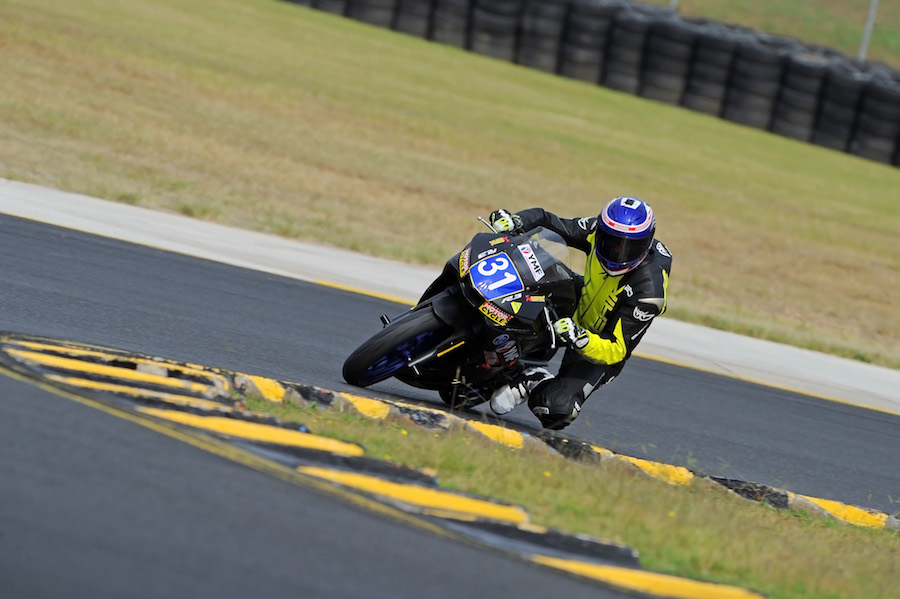 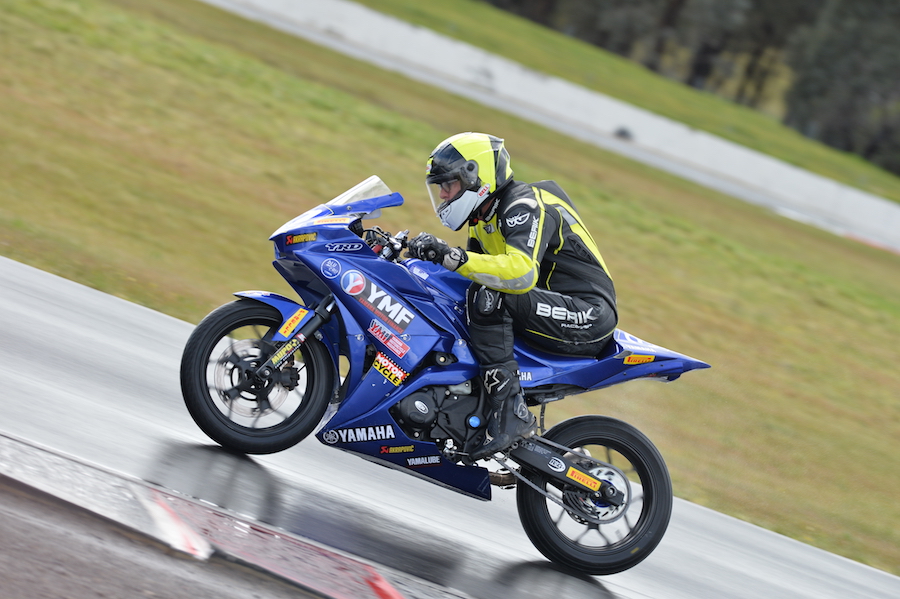 Plenty was learned at that first race meeting, including the realisation that I’m nowhere near as fit as I needed to be to race, I’m also found I was slow, and what looks slow when you are standing on the other side of the fence is anything but. Even the tailenders are traveling a lot faster than you realise.

I also discovered I wasn’t really fussed on the whole racing thing, it didn’t grab me like I thought it would, and being pretty big on self preservation the sight of guys crashing their brains out in front of me every time I went out on track was a little disconcerting.

Round three of the series was held at Morgan Park Raceway in Queensland, and due to a prior commitment I didn’t need an excuse not to attend so we drafted young hotshot Lewis Dray into the team. The Kiwi acquitted himself well, posting a a trio of seventh-place finishes to claim sixth overall for the round. I got the better end of the deal because Lewis spent the weekend improving the bike from the base setting I had used at Easter Creek. The fourth round of the series at the super-fast Phillip Island Grand Prix Circuit was the turning point in my quest to become a legit racer, but I needed to bottom out first. I’m big enough to admit that I could have contested the Phillip Island round, but nerves got the better of me. I have circulated the Grand Prix circuit at speed on both two and four wheels, but the thought of wearing myself out as a wobbled around at the back of the pack filled me with dread. I put the call out for a guest rider, and young Moto3 racer Tayla Relph stepped up to try her hand at the production-based series. I went along to lend a hand, and it was when I caught up with the R3 Cup competitors that I realised I really wanted to be part of the action. Through the efforts of the Race Centre team, the R3 Cup competitors had become a close-knit group that enjoyed spending a race weekend hanging out, racing hard and helping each other out with their bikes to ensure everyone lined up for every race. I can’t say I wasn’t tempted to turf Tayla off my bike, but watching her mix it up with the guys at the front and post a 6-5-8 result for sixth overall for the round was an enjoyable way to spend a weekend. The final round at Winton Raceway saw the R3 Cup rejoin the ASBK series for the grand final. An official ASBK practice day a week prior to the event was a good chance to see if the fitness training and coaching I had been undertaking would result in a better showing than my Sydney Motorsport Park debut. Unfortunately, the first thing I discovered is that when you are knocking on the door of a half century, crashing bloody hurts. Five laps into the first session I hit the deck, giving a number of my body parts a good bashing in the process. Thankfully the bike was relatively undamaged and I was able to complete a few more sessions, but I paid for it over the next week as I hobbled around. While nursing my aching body, I compared my gradually increasing lap times to what I believed the the pace would be on raceway. While it looked promising, it was all based on optimistic speculation.

Friday’s official practice was held in miserable, cold and wet conditions, but I discovered I’m not too bad in the wet and secretly hoped it would keep raining. While plenty of others slid off the track and through the mud, I managed to keep it upright for two days and even cross entered into the 300cc Production Class (which you can do on a YZF-R3), doubling my track time and adding to my growing enjoyment. By the time Race 1 rolled around the track had dried and what followed was two days filled with cracking battles.

A race-long battle with Steve Mason on the Sunday morning and an exciting race to the flag with Daniel Moore during the last race of the year went a long way to erasing the memory of the crash into the mud I had during one of the production races, and I was rewarded with a top 10 finish overall finishing. Ninth for the round with a best finish of seventh in Race 2.

In the space of three days, I had gone from racing just because I said I would, to being totally addicted and counting the days until the start of the 2017 season.

If you have been tempted to have a crack at racing, but feel a bit intimidated as a newbie, then the YZF-R3 Cup is a great way to make the step. Every person involved in the series wants it to grow further and become a huge success, and the more competitors who become involved the more exciting the racing will be. Personally, my target for 2017 is to see two Dobies lining up on the grid with son number one already pestering me for a test run on my R3. Let’s just hope he’s not quicker than me too soon.

A brand new bike and race kit can be purchased from Yamaha for just $7900. You get a brand new YZF-R3 in road trim and an extensive race kit full of all the bits required to go racing. More information can be found at the Yamaha Australia web page http://www.yamaha-motor.com.au/ or http://amcn.com.au/editorial/get-racing-easy-way/

If you already own an R3 and simply want to purchase the race kit, that can also be purchased through Yamaha Australia for $3630

With the first full season of the Yamaha YZF-R3 Cup now run and won there are a few race-ready bikes being offered for sale – start Googling. It seems that one of the biggest obstacles people face when wanting to go racing is finding out information on how to obtain a competition licence. The whole system is easy and hassle free, just join a Motorcycling Australia affiliated club and they will run you though the rest of the process. A full list of state controlling bodies and their affiliated clubs can be found on the Motorcycling Australia web page at www.ma.org.au or see our How To in AMCN Vol65 No22.