Saying goodbye to a Yamaha legend

Yamaha’s VMAX – the descendent of the original V-Max – has been killed off. In 2017 the last one rolled off the production lines withs no sign of a replacement waiting in the wings.

With the current 1700cc V4 bike’s demise, we witnessed the end of a model that can trace its heritage back almost 33 years to the debut of the original 1200cc version in Las Vegas in October 1984.

The V-Max, and the VMAX that followed, are enigmas. They offered big numbers in terms of power, but achieved only small ones when it came to sales. It didn’t inspire a host of rivals or become famous through racing exploits, and yet
the model achieved a mystique and a hard-core following that means its name is up there with Ninja, Katana or Goldwing as a motorcycling touchstone. Kids in the 1980s who couldn’t tell a C90 from a VF1000 would recognise the V-Max’s name and its distinctive shape, and know
that it was the Top Trump of bikes when it came to sheer power and straight-line acceleration.

The V-Max story starts a few years before its 1984 unveiling, when Yamaha engineers took a fact-finding trip to the United States. Among them was Akira Araki, who would go on to helm the V-Max project.

Years later, in 2001, he explained to Yamaha’s own Design Café website how the idea came about, recalling that they witnessed riders drag racing on a bridge over the Mississippi. 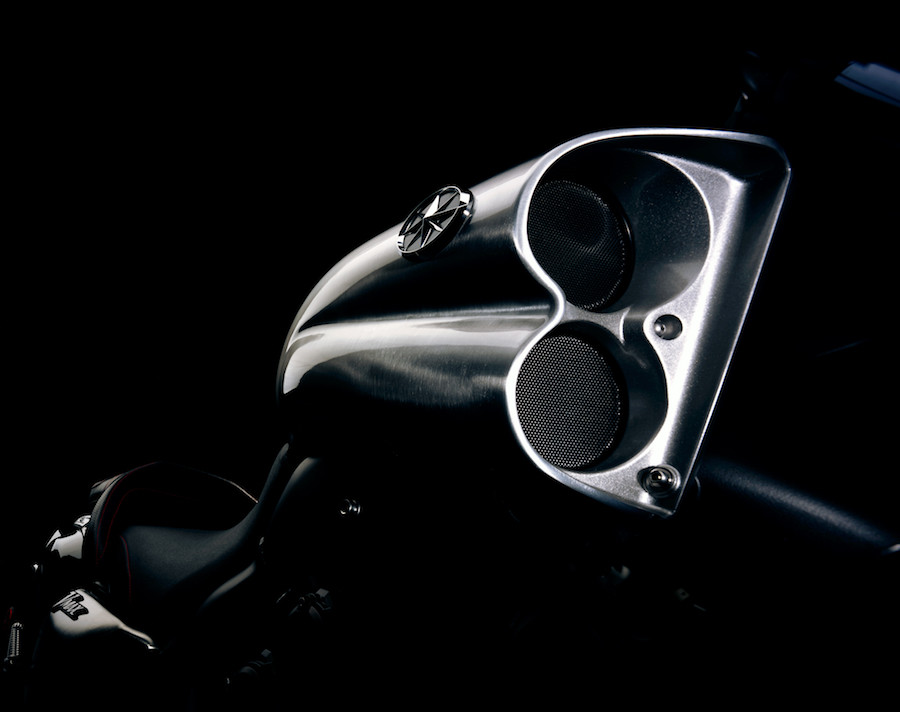 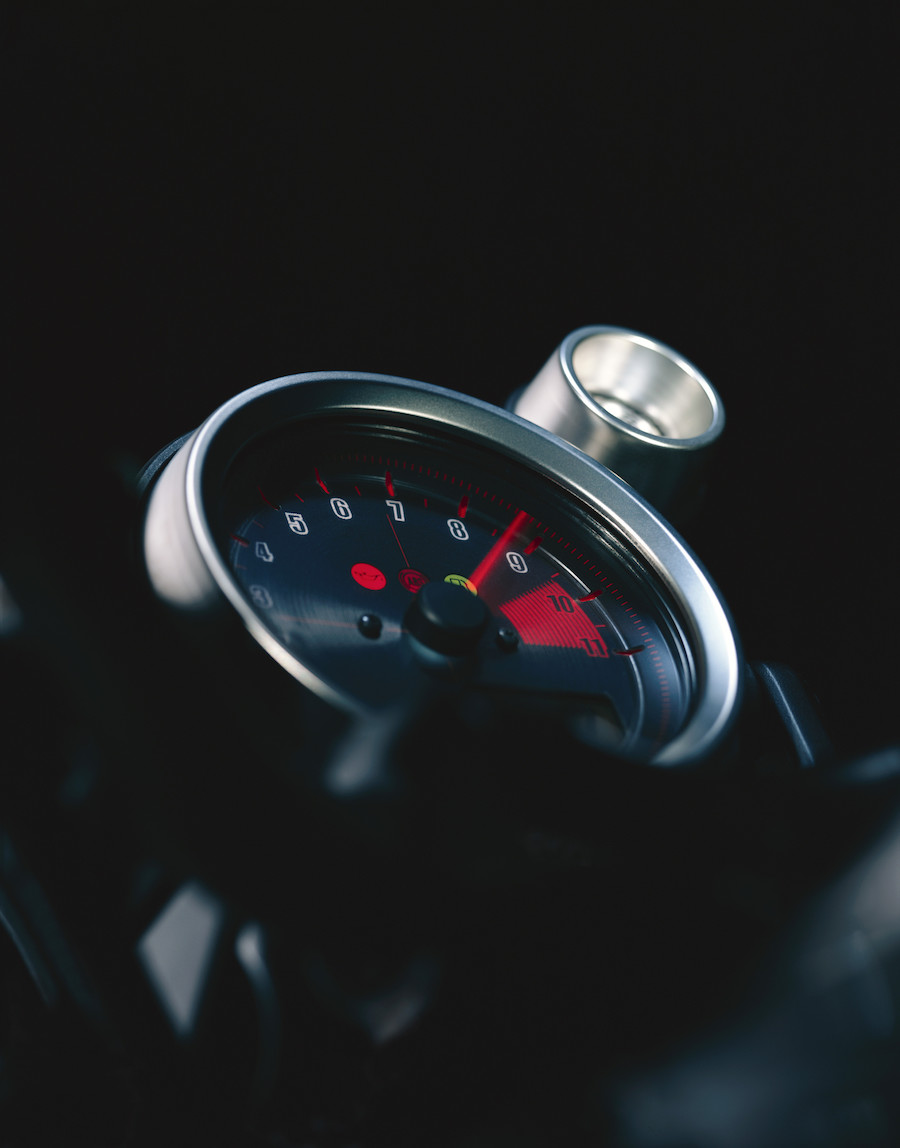 “They started from one end of the bridge and the finish line was the opposite side – it was a simple rule,” he said. “The first concept I imagined from this impressive race was a bike that is strong at straight lines and really fast. It was the birth of the V-Max concept.”

A V4 motor was chosen early on because of its echoes of the V8 engines used in American cars. Fortunately, Yamaha was already working on a new V4, an 1198cc unit developed to power the Goldwing-rivalling 1983 Venture Royale. While that bike is now largely forgotten, its existence cemented the drivetrain layout that would become the V-Max’s calling card.

But there was a sticking point with the new V4 – it made less than 70kW and had been developed with a lazy touring bike in mind.

After considering adding a turbo – something that was in vogue in the early 80s, when each of the big four Japanese manufacturers developed turbocharged bikes – Yamaha hit on the idea of what it called V-Boost, which followed the same thinking that would also lead to Honda’s Hyper VTEC system. Both are designed to address a fundamental compromise between low-end torque and top-end power. For tractor-like pulling power, as needed for the Venture Royale, engine designers will use small intake sizes, which increases the velocity of the mixture entering the engine, mixing fuel and air better at low engine speeds. But the same small intakes will strangle engines at high revs, limiting peak power.

While Hyper VTEC, as used on the VFR800 to this day, switches from using a single intake valve at low revs to two valves at high revs – doubling the size of the intake – V-Boost manages the same trick but in a different way. It achieved the doubling of intake size by using a clever intake manifold.

The 1200cc V-Max had four small carbs, one for each cylinder, but the V-Boost system opened butterfly valves in the intake manifold to connect the carburettors into pairs above 6000rpm. That meant each cylinder was sucking through two carbs rather than one at high revs, easing its breathing and massively improving power.

The result was remarkable, upping the lazy Venture Royale-based motor to a whopping 108kW. That was an unimaginable figure in 1984; even the GP bikes of the era struggled to achieve so much power. No other production machine even came close.

Not every V-Max was born equal, though. While American models got the full performance, in many markets (including the UK from 1991-1995) the V-Boost system was disabled, limiting power to the original 95hp and effectively eliminating the entire point of V-Max ownership.

Perhaps not surprisingly, the restricted bikes didn’t sell very well, and few survive today. But if you’re in the market for a V-Max, do make sure that the one you buy isn’t the castrated model…

For a bike that made such a splash when it was launched, the V-Max’s ongoing development was neglected. While American sales were initially strong, they settled down after a couple of years and Yamaha opted to let it bumble along as it was rather than change it to regain interest.

There were updates, but usually only to colours and finishes. In 1986, the rear wheel was changed and the V-Boost system was improved. The front wheel was updated in ’87, in 1990 it gained a new ignition system, and in 1993 there were new forks and brakes, with larger discs and four-pot calipers replacing the old two-pots. In 1996 the engine was tweaked to add
a spin-on oil filter while the UK-model V-Max finally got an American-spec V-Boost system.

Despite the apparent lack of interest from its maker, the V-Max remained in production in this first-generation form until the end of 2007. No electronics to thwart the good times. Ex AMCN staffer Renie Scaysbrook pretty much rode everywhere like this on our 2010 long- termer and, with so much grunt, why not?

By the time the 1200cc V-Max died, it was very well known that a completely new replacement model was on its way. In one of the first of the drawn-out teasing model launches that have become annoyingly familiar today, Yamaha gave us the first clear look at what would become the 2009 VMAX (all in capitals and losing its hyphen) in 2005, a full two years before it would stop building the original version.

Development of the new VMAX had started in 2003. Yamaha had recognised that the original was nearing its use-by date and had a choice: update it or start again from scratch. Given the original V-Max’s age, it opted for the latter route.

Speaking at the launch, Yamaha Europe product planning manager Oliver Grill said: “We didn’t want to fiddle around with small changes. The idea grew stronger and stronger to develop a completely new machine, including a new engine.”

And what an engine it was. Yamaha developed the new 1679cc unit from a clean sheet, and with it very nearly managed to become the first production bike to break the 200hp/150kW barrier. Eventually, it had to be content with a figure of 147kW.

While the new engine, fuel-injected rather than carb-fed, didn’t retain the original V-Boost system, Yamaha was keen to preserve the feeling. So it added its YCCI (Yamaha Chip Controlled Intake), a system that varies the length of the intake trumpets. At low revs, longer trumpets are used, but at higher engine speeds the top parts lift up, creating a gap between the two halves where additional air can flow in.

It was also one of the first bikes to get a fly-by-wire throttle, following on from the YZF-R1 and R6, and Yamaha’s traditional EXUP valve in the exhaust also helped give an extra kick of top-end power. The engine retained the original 1200cc V-Max’s 66mm stroke length, creating all the extra capacity through the use of a 90mm bore (up from 76mm). That helped it rev to 9500rpm, with peak power at 9000rpm. Not that the engines shared any actual components – the new 1679cc motor’s 65º V angle meant it was externally smaller than the 1198cc 70º unit.

Engine aside, it was all change in the transformation from V-Max to VMAX. Where handling hadn’t been a priority for the original – it was notorious for being over-engined for its floppy steel-tube chassis – the new one had to live up to modern expectations. A cast-aluminium beam frame was the answer. The bike was also given up-to-the-minute six-pot radial-mount front brake calipers and hefty 52mm forks.

Despite its improved spec, Yamaha saw it as prudent to electronically limit the top speed to 220km/h. It was a wise move because the VMAX, for all its aluminium and modern technology, remained fatty at 310kg (wet) – a few kilos more than the V-Max.

Despite its heft, the new VMAX was a revelation when compared to the old model. The aluminium frame, monoshock rear suspension, some of the biggest upside-down forks ever seen and monumental six-pot, radial-mounted, ABS-equipped brakes put it in a different dynamic league to its predecessor.

Go in with the old V-Max, or any other power cruiser of the era, as your yardstick and the 2009-on VMAX’s handling is impressive. But just like the original, straight line acceleration was the real talking point.

We might have got used to the idea of 150kW bikes in the last few years, but we need to talk about torque. The VMAX managed a claimed 166.8Nm at just 6500rpm. And forget the idea of a torque curve – it had a torque plateau. Anywhere from 3000rpm to 9000rpm and beyond it managed more than most superbikes can manage at their absolute peak. Just like the big American V8s that inspired it, the bike reflected the old adage that there’s no replacement for displacement.

The tsunami of torque, combined with the VMAX’s long wheelbase, gifted the bike with party-piece acceleration that, even now, will embarrass virtually every other bike on the road. The stock model’s low-10-second standing quarter mile doesn’t even tell the whole story, as by the end of a perfect run the VMAX would be nudging its electronically imposed 222km/h top speed as it quickly finds the limit of its acceleration-focussed gearing.

VMAX sales were inevitably held back by the bike’s sky-high price and, in 2010, the Ducati Diavel moved the goalposts for muscle-cruiser handling. Come the end of 2016 and the introduction of Euro 4 emissions regulations and a host of other type-approval changes in Europe, the bike was quietly dropped from Yamaha’s range across the continent.

Does that mean it’s the end of the road for the VMAX altogether? Yamaha won’t be drawn, but there’s little sign that a replacement model is high on its priority list. The company points out it’s still using the VMAX name, albeit on outboard boat engines, but given the last new VMAX motorcycle was being teased for years before its predecessor had even been killed, the chance of Yamaha surprising us all with an all-new model in the near future is slim. It’s not impossible, though. A 2014 patent showed that the firm was working on a cleaner-running version of the VMAX engine, with additional catalytic converters in the downpipes. What became of the project isn’t known.

The likely truth is the VMAX has been killed, at least in part, by bikes that were never intended to be its rivals. It was conceived at a time when designers had to make big choices. In the 80s you could go fast in a straight line or buy something smaller and lighter that handled well, and even in the 2000s when the VMAX 1700 appeared, the same held true to some extent. Now, though, huge leaps in bike design, and particularly electronics, mean that massive power can easily be combined with other attributes, creating bikes with much broader appeal.

There’s purity in the VMAX’s single-minded pursuit of straight-line acceleration, but such one-dimensional bikes are increasingly a thing of the past.