Fifteen years before World War II the motorcycle land-speed record changed more often than at any other time in history. A time, for a while at least, when British twins ruled the world

In 1923 genius development engineer Claude Temple rode a British Anzani to a new record of 108mph (172.8km/h) at Brooklands, but soon bikes were getting too fast for the confines of a suburban speed bowl. So over the next 15 years speed freaks congregated on smooth and straight roads across Europe: most notably Arpajon in France, Gyon in Hungary and Cork in Ireland. By the mid-1930s the first stretches of autobahn and autostrada also became happy hunting grounds for speedsters – though the Germans and Italians were keeping these to themselves. 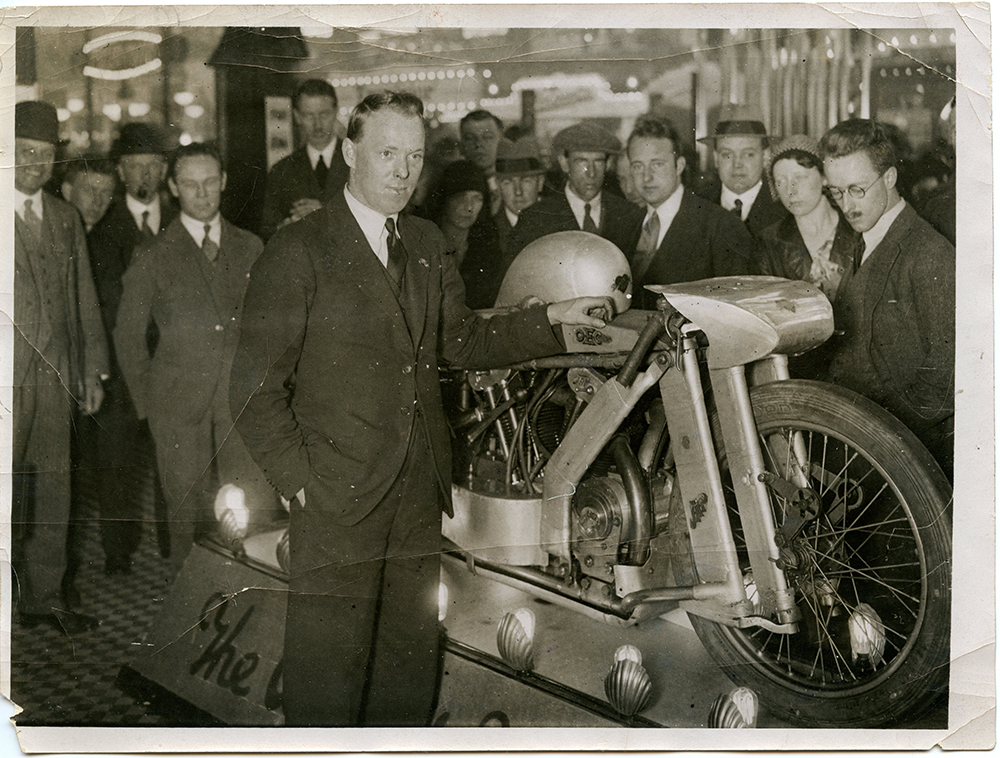 The Arpajon road headed south from Paris towards Orleans, straight as an arrow for 7.2km. Straight, yes, but narrow and bordered by trees. The pre-war record contest had its greatest day here in August 1929 when two Britons duelled for the honour of being the world’s fastest motorcyclist. Both were powered by JAP’s new long-stroke 80 x 99mm JTOR engine – inspired by the company’s successful long-stroke speedway engine.

The record changed hands four times that day, with Bert Le Vack’s final 126.75mph (203.98km/h) run on his 60hp Brough Superior edging out Joe Wright’s similarly powerful Zenith. This speed feast was witnessed by 20,000 fans picnicking by the road oblivious to the dangers, until Ernest Eldbridge came past in a 300-horsepower Fiat car, “skidding continuously at 150mph taking the entire width of the road, the spectators finding cover behind trees”.

Despite his Gallic-sounding name, Le Vack was British. He was a brave rider and a talented development engineer who went by the name of The Wizard of Brooklands, thanks to the number of records he had broken at the world’s first purpose-built racetrack. He joined JAP in 1921, determined to help the company build a bike to outpace the latest Harleys and Indians. Le Vack was a taciturn, secretive type who liked to work alone behind closed doors at the JAP factory, until he left to pursue his speed dreams alone. His speciality was concocting wicked fuel brews. When he had time, he fettled TE Lawrence’s Brough Superiors. 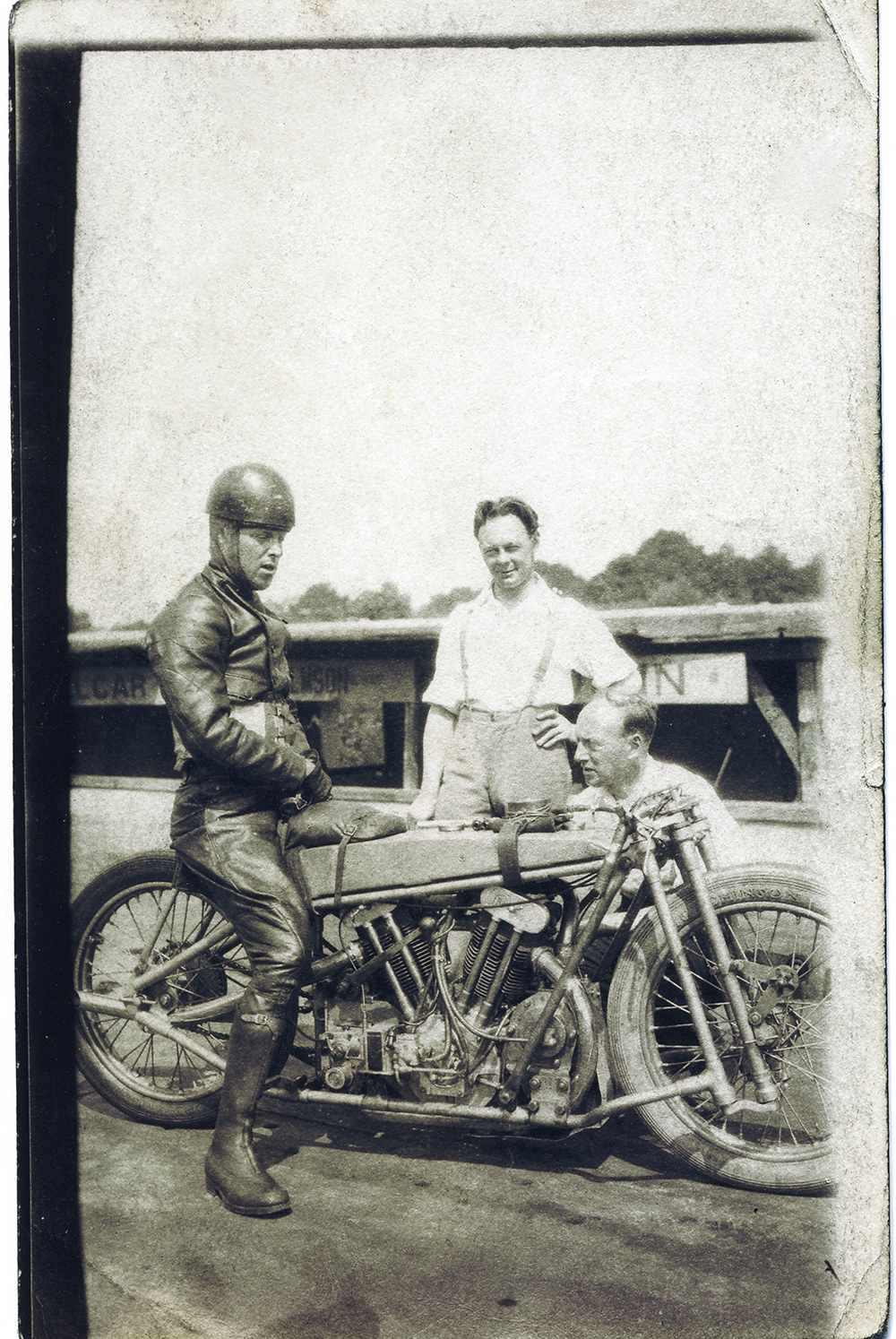 Though he didn’t get long to celebrate his 1929 record because a new power was looming on the horizon – and approaching at high speed. Ernst Henne was a German road-racing champion and a BMW factory rider who had his heart set on becoming the fastest rider on earth. To this end BMW developed a supercharged 750cc R63 boxer twin. Henne did his own bit for aerodynamics by wearing white one-piece overalls (earning him the nickname The White Phantom), a teardrop helmet and a very fetching conical abdomen strapped to his backside.

In September 1929, just three weeks after Le Vack’s run, Henne raised the record by almost 13km/h on a not-quite-straight highway outside Ingolstadt. Wright, a builder from Staines, and his tuner Temple knew they’d have to work hard to better that. The secret, of course, was to supercharge the JAP. This isn’t an easy trick to pull off on a V-twin because it’s difficult to find the right compromise between compression ratio and boost on each cylinder.

And while BMW had all the facilities in the world – from dyno rooms to wind tunnels – Wright and Temple toiled in their shed with very scant resources, working by trial and error. If they wanted to test a modification they’d made to the JAP’s British-made Powerplus blower and its induction system they had to trundle to nearby Brooklands and ride a few laps. 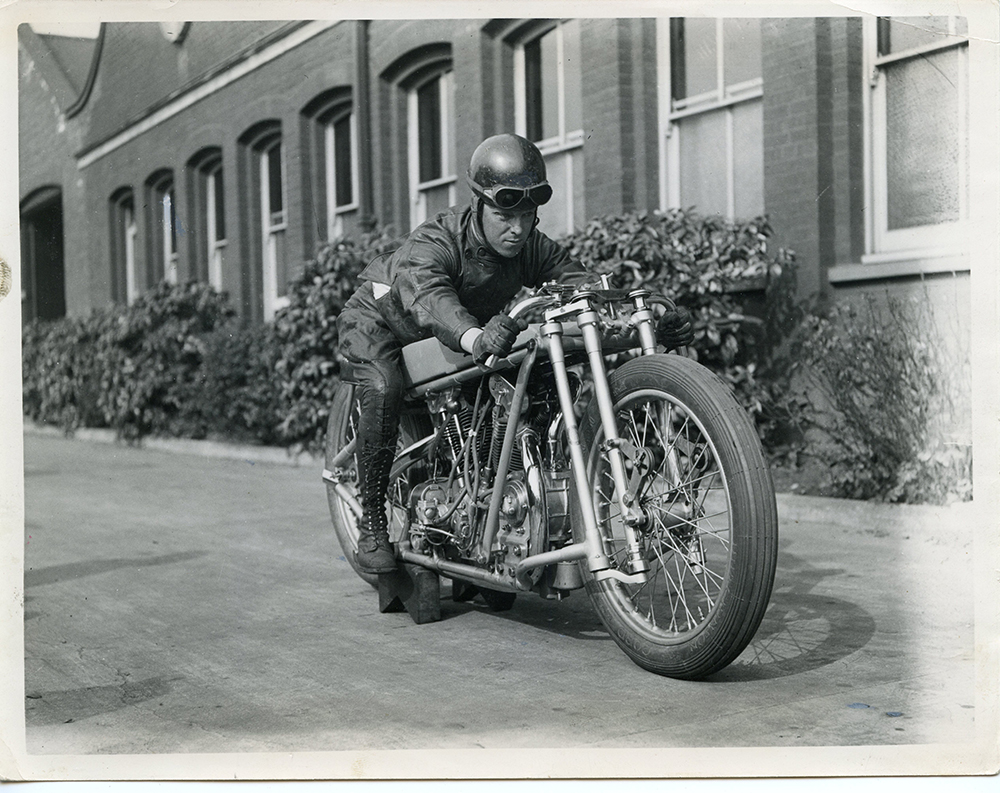 By August 1930 they were ready and travelled to Arpajon with a supercharged, JAP-powered OEC, using the Osborn Engineering Company patented, self-centering duplex front fork – just the thing for high-speed straight-line work. This time Wright raised the bar to 137.23mph (220.85km/h), though again glory was short-lived. Three weeks later the record was Henne’s, this time by a measly 0.3mph.

So Wright and Temple went back to work, hastening to beat winter as they closed in on the perfect compression ratio/boost compromise. In early November they travelled to the Irish Free State to use a two-mile stretch of concrete highway between Cork and Carrigrohane. They took with them the OEC and Wright’s old Zenith as back-up. By now Temple’s engines were making around 100hp, a phenomenal figure for the time, though 17 of those were required to run the superchargers. 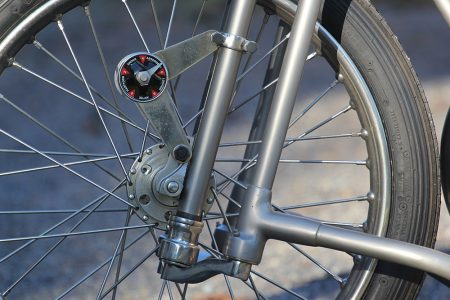 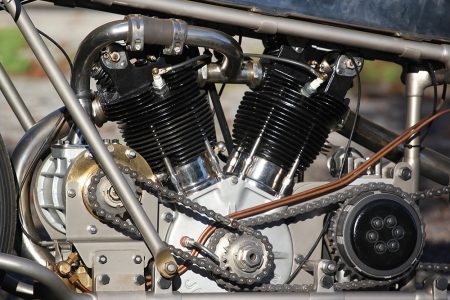 The OEC had also sprouted an alloy handlebar fairing, plus faired-in crankcases and fork. The Zenith had basic aerodynamic improvements, its fork covered by timber fairings wrapped in aircraft canvas.

Steely-faced Wright was a sight to behold. He had forsaken his usual two-piece leathers for a thick woollen polo-neck and breeches, taped around the neck, torso and wrists to reduce drag. The record books state he raised the record by a staggering 13mph (21km/h) to become the first motorcyclist to hit 150mph (241km/h).

But all was not as it seemed. Soon after his daring ride, Wright’s OEC was exhibited at the Olympia show. But in fact he had taken the two-way record on the Zenith after the OEC had sheared an engine mainshaft key, having set the fastest one-way speed. Since OEC were paying Wright and Temple, while Zenith were going bust, all colluded in the lie.

The press worked itself into a froth over the story and Wright’s fellow record breakers were none too pleased, though not because of his little branding trick. It just wasn’t the done thing to break records by such a margin because this reduced the number of attempts that might be undertaken by rivals, thus reducing the potential for sponsorship income. Like many others at the time, Wright and Temple were professional record breakers, hawking each attempt to the highest bidder, with little loyalty shown either way. Their August 1930 record was sponsored by Castrol, the 150mph November run by Shell.

Le Vack was no doubt planning his reply to his compatriots’ latest effort when he was killed while testing in the Swiss Alps. It took Henne and BMW two years before they were ready to have another crack at Wright. In 1932 Henne raised the record by one mile an hour, then two years later he used a section of the new London to Constantinople highway. He reached 152mph (244km/h), but much better was to come. 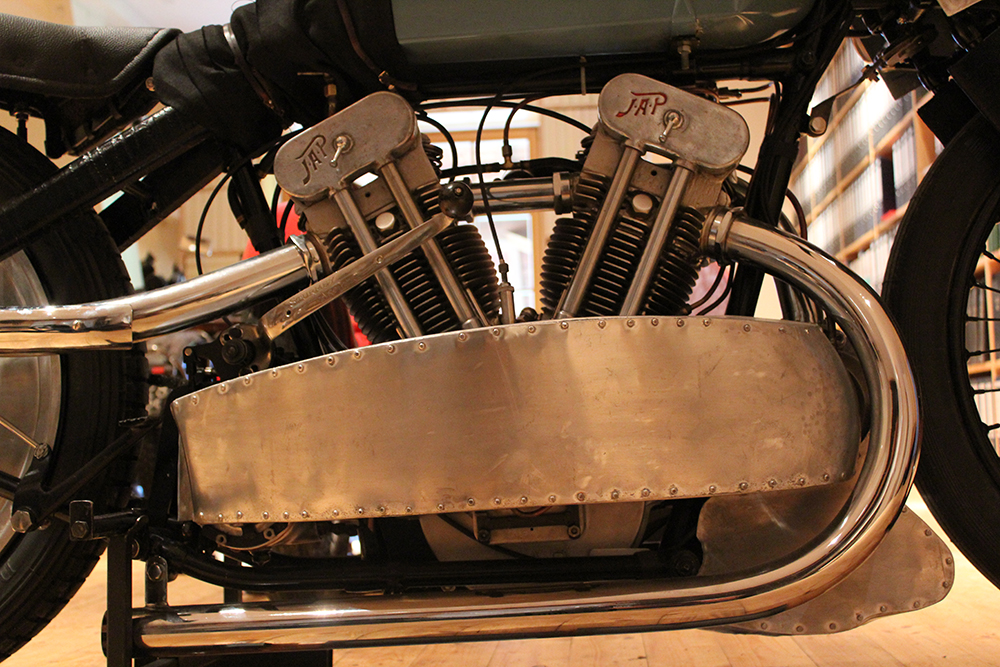 Henne and BMW had found the perfect place to push deeper into the unknown: Germany’s first section of autobahn south of Frankfurt, for which Adolf Hitler had shovelled the first dirt in 1933. They’d also found the best possible financiers for their ambitions – the Nazis, who made sure they got whatever they needed and to hell with the cost. With that kind of backing there was no stopping them. In September 1935 they pushed the record to 159mph (255.88km/h). A year later they returned to the same piece of tarmac with a completely different motorcycle: a more highly supercharged 495cc twin enveloped in bodywork that looked like a wingless fighter plane. BMW had developed the aerodynamics in a wind tunnel also used by Zeppelin and Dornier. This radical new combination was good enough to raise the record by 10mph. Three years later BMW’s blown 500 won the Senior TT.

And yet the JAP V-twin still had more to give. This time it was the turn of Eric Crudgington Fernihough to pick up the gauntlet. A former winner of the Dutch TT for Excelsior, Fernihough trucked his supercharged but barely streamlined Brough Superior JAP to Gyon in the spring of 1937. Unlike the foreigners, Britain’s latest record breaker didn’t like streamlining – he believed it was an accident waiting to happen – and he proved it wasn’t necessary by narrowly retaking the record from the Germans.

Cheshire-born Fernihough remained the world’s fastest motorcyclist for six months, until a new power from southern Europe joined the game. Guiseppe Gilera had bought the rights to the supercharged and super-fast inline-four Rondine from aristocratic petrol-heads Count Bonmartini and Prince Lancellotti (no, really). At dawn on 21 October 1937 brilliant engineer and rider Piero Taruffi wrestled Gilera’s Mussolini-approved streamliner along the autostrada outside Brescia to 170.27mph (274.02km/h). But again, it didn’t take long for Henne and BMW to respond. In late November they returned to the Frankfurt-Munich autobahn where they reached 173.67mph (279.49km/h).

Fernihough wasn’t done yet. Well, in fact he was. In the spring of 1938 he once loaded up his supercharged Brough and made the 1700km trek to Gyon. With more power and slightly improved aerodynamics, he took aim at BMW. He was travelling at about 180mph when he lost control, possibly due to a side wind, and careered into the Hungarian countryside. He was killed instantly.

That was that; the British V-twin’s time as the fastest motorcycle on the planet was over. And Henne’s 1937 record stood for 14 years because the world had bigger things to worry about. 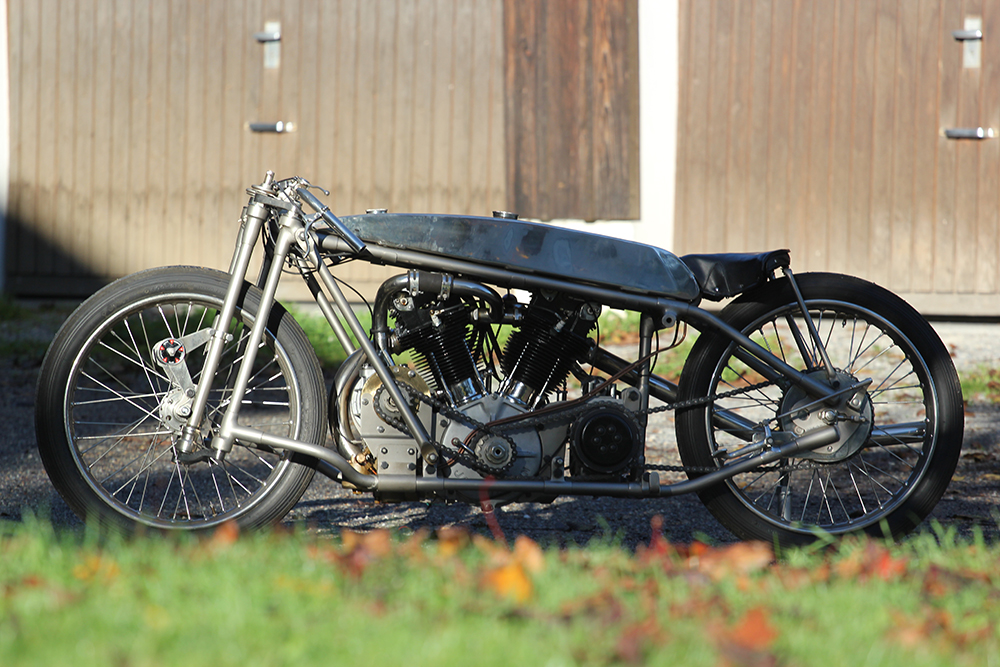 John Alfred Prestwich is the forgotten hero of the British motorcycle industry. Pa Norton, George Brough and Siegfried Bettmann and Maurice Schulte, the German migrants who founded Triumph, are all celebrated. But Prestwich? Hardly at all.

Yet Mr JAP was arguably the greatest engineer, inventor and entrepreneur of the early years of the Brit bike industry. His firm made the most powerful, most reliable engines and were used by Brough Superior, Triumph, Matchless, Ariel, Royal Enfield, Excelsior, DOT, Sunbeam, Zenith, New Imperial, HRD and Morgan  cars, among others.

Prestwich also made his own spark plugs and carburettor, with multiple jets for smoother throttle response. In 1904 he designed his first V-twin and a year later his first water-cooled V-twin.

In 1908 he built a 2.7 litre V-twin for the TT, which riders rejected as being “too lively”. Two years later he put the engine in a plane, but farmers complained their horses were frightened by planes taking off near the factory in Tottenham, North London.

In 1909 a Prestwich engine powered the first all-British plane flown by a British pilot and in 1916 a JAP-powered plane shot down a Zeppelin over London. Wiithin a few years the Germans were buying 35,000 engines a year from JAP; by WW2 JAP had made over a million engines. 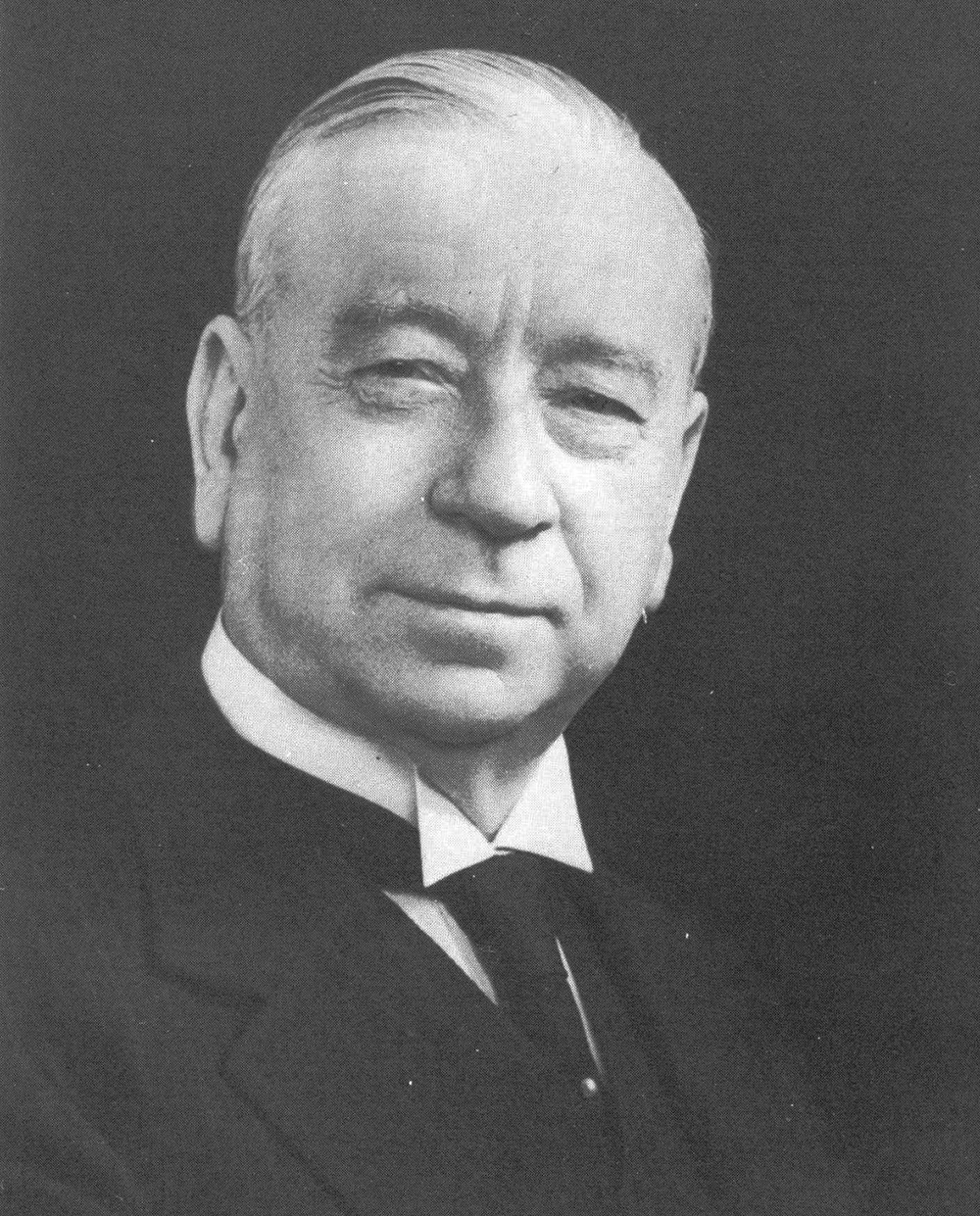 Born in 1874, Prestwich was of that special breed of Victorian engineer and inventor who  mastered new technology sweeping the western world. He made movie cameras in the first decade of cinema. A Prestwich  35mm camera filmed Scott’s fatal 1913 South Pole mission.

By then JAP’s gaze was on the greatest toy of the time: the internal combustion engine. There’s no doubt that his background in the watch-like mechanisms of cine cameras helps explain the purity and clarity of the numerous engine designs that flowed from his pen over the decades.

Prestwich wasn’t just a brilliant and original designer of engines, he also introduced new standards of excellence to manufacturing and assembly – another reason why his engines were so reliable and popular for record breaking.

All engine parts were polished and piston crowns were highly buffed. Once assembled, engines were run at 800rpm for eight hours, driven from external shafts, then tested on a dyno, dismantled, inspected and reassembled.

Prestwich was the first British manufacturer to use the US-pioneered Go/no go system of quality control to ensure the tightest tolerances and inter-changeability of parts. For this he was awarded a medal for his “work of distinction in promoting the mechanical arts”.

He also devised a new way of making pencils and was Europe’s biggest pencil manufacturer, churning out 1.5 million a week.

Prestwich died in 1952. Five years later JAP was taken over by Villiers, which was later merged with Norton and Triumph in the ill-fated NVT venture. 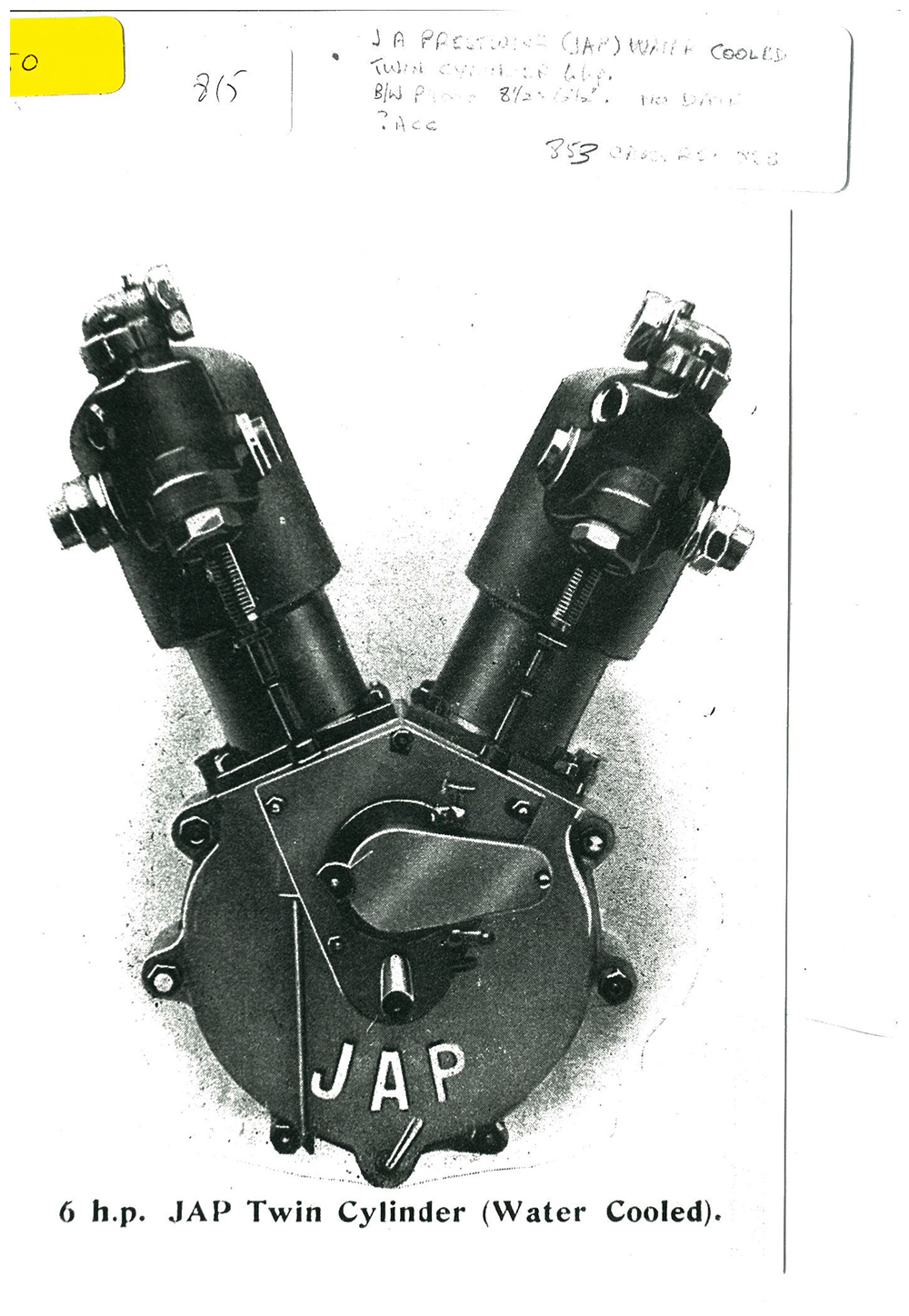