It took a good deal of soul searching and deep reserves of self-belief, but Maverick Viñales (Monster Energy Yamaha) finally served up a timely reminder of his talents to launch himself into the title fight just as his challenge was on the verge of implosion.

This was a race in which he reversed the previous week’s misgivings that had left Yamaha’s bosses, team and rider perplexed coming into this weekend. But Viñales started well from pole position, broke clear of everyone with the exception of Francesco Bagnaia (Pramac Ducati) with a full tank of fuel and carefully applied pressure on the race leader when necessary, all assets that were sorely missing from a desperately disappointing race here a week before.

These are the afternoons which raise the question: why doesn’t Viñales produce this kind of performance on a more regular basis? On his day the former Moto3 World Champion remains one of the fastest riders in the world. And in 2020, this craziest of years, his mercurial nature may yet win out when in recent months current leader Andrea Dovizioso (Ducati Racing) has rarely approached the heights Viñales hit here. 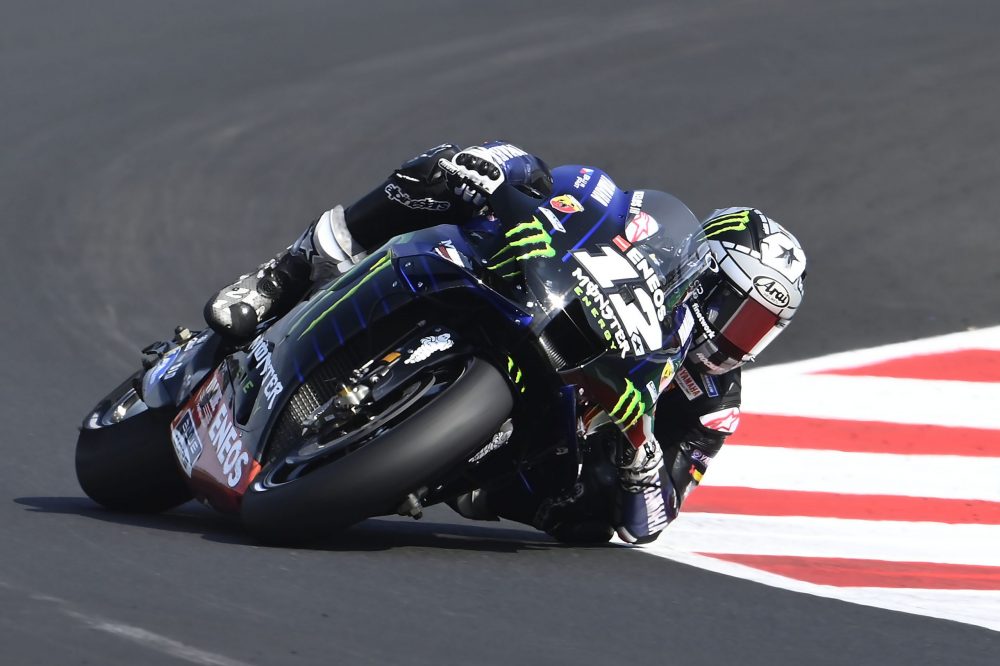 “Many people were doubting me a lot, especially with what was going on on Sundays,” Viñales said of his previous inability to start well or run a strong early rhythm. “Most people thought it was my mentality. But I have that winner’s mentality, I’m always thinking about winning. Maverick was never gone. He’s always been here.”

Just as Viñales righted the previous week’s wrongs, the fortunes of last week’s stars waned in the Italian sun. With reasons ranging from sickness (Franco Morbdelli, Petronas SRT Yamaha), lapses in concentration (Francesco Bagnaia) and a loss in confidence (Valentino Rossi, Monster Energy Yamaha), the leading lights in the VR46 Academy were unable to replicate their stellar feats of round seven. The Italian fans in the race day attendance of 9,970 had to make do with success in the earlier Moto2, Moto3 and MotoE contests.

Viñales comes away from Misano reinvigorated. But for 20 laps even he was overshadowed by Bagnaia, who produced further evidence that suggests he is a coming force in the class. Fresh from his first podium a week ago, the 23-year old decimated Viñales’ early advantage of 0.6s and coolly pounced on the leader’s mistake at turn four on lap six to take command of a premier class race for the first time. Within a lap he was three quarters of a second clear. “I was completely under control,” he said. 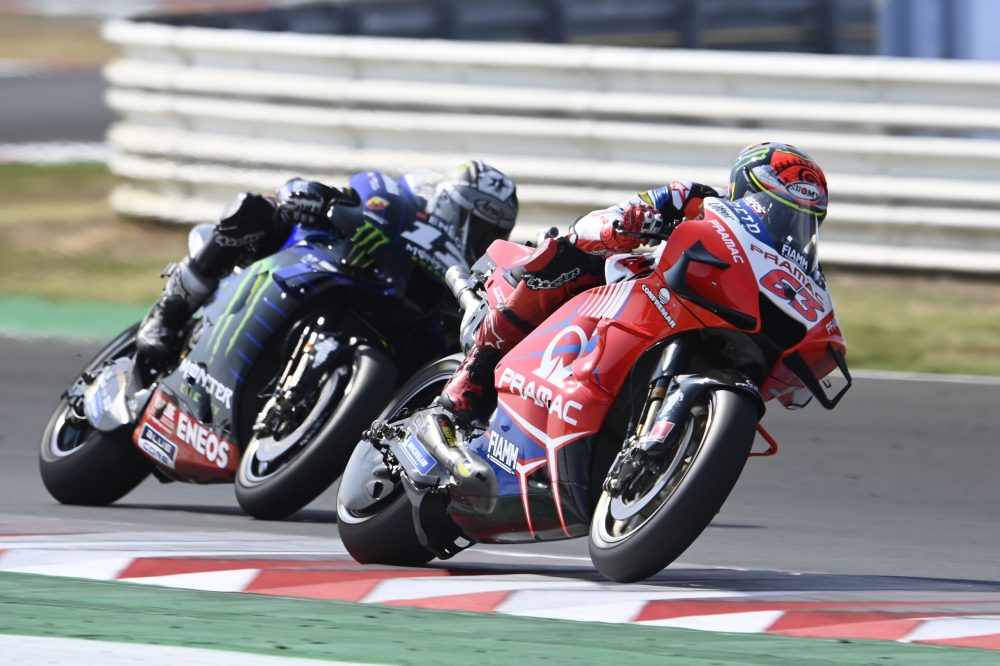 By lap twelve Bagnaia’s lead reached 1.4s. But it remained that way for five laps before Viñales began turning the screw. From lap 18 the gap came down a tenth of a second each time. “I was arriving,” the Catalan recalled. But any thoughts of how he would attack the Ducati were rendered meaningless. For Bagnaia tucked the front on lap 20 as he threw his GP20 from right to left in the turn six flick.

Bagnaia was the fifth rider to crash in what was ultimately a war of attrition. Aleix Espargaro tried too much, too soon, binning his Gresini Aprilia at Quercia on lap one, pushing last week’s winner Morbidelli wide and back to 19th. It took just two laps for Rossi’s challenge to come undone, the Italian crashing out of seventh at turn four. The fast-starting Brad Binder (Red Bull KTM) fell from third just ten corners later. And front row starter Jack Miller (Pramac Ducati) was sitting fourth when he suffered the cruelest of fates. A tear-off visor got lodged in his airbox, forcing him to retire on lap six. 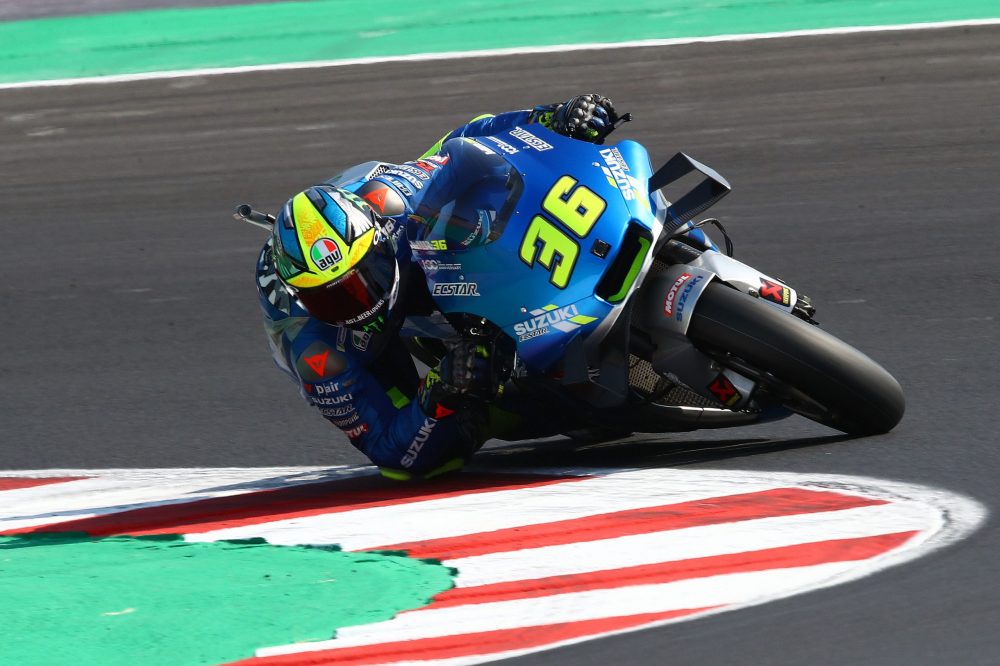 In their absence it was Pol Esaprgaro (Red Bull KTM) who sat in third, while Fabio Quartararo (Petronas SRT Yamaha) soon honed in. FP4 had shown Joan Mir (Ecstar Suzuki) to have potential race winning pace. But he was once again punished by the GSX-RR’s inability to take advantage of a new tyre. His fightback from eleventh on the grid was as quick and ruthless as the last-lap move that deprived Rossi a home podium seven days before. By lap six, Mir had already passed six riders to sit fifth. From there he set about reeling Quartararo in.

A test at Tuesday before this weekend, Espargaro and KTM had found a cure for their turning woes on this grippy surface. The Catalan’s decision to run with Michelin’s soft rear compound paid off initially as he held a solid one second gap over Quartararo. But “ten laps to the end the rear tyre said ‘Ciao, ciao… finished.” Espargaro said. The Frenchman was on his tail by lap 20.

But a move wasn’t forthcoming. “I know the weakest point of the Yamaha,” Espargaro admitted. “If you kill their corner speed they are quite dead.” He was thus reduced to an effective orange roadblock as Quartararo’s Yamaha lacked the KTM’s traction on corner exit and overall top speed. This jostling allowed Mir, 2.3s off the podium on lap 20, to remarkably jump the gap in just four laps. 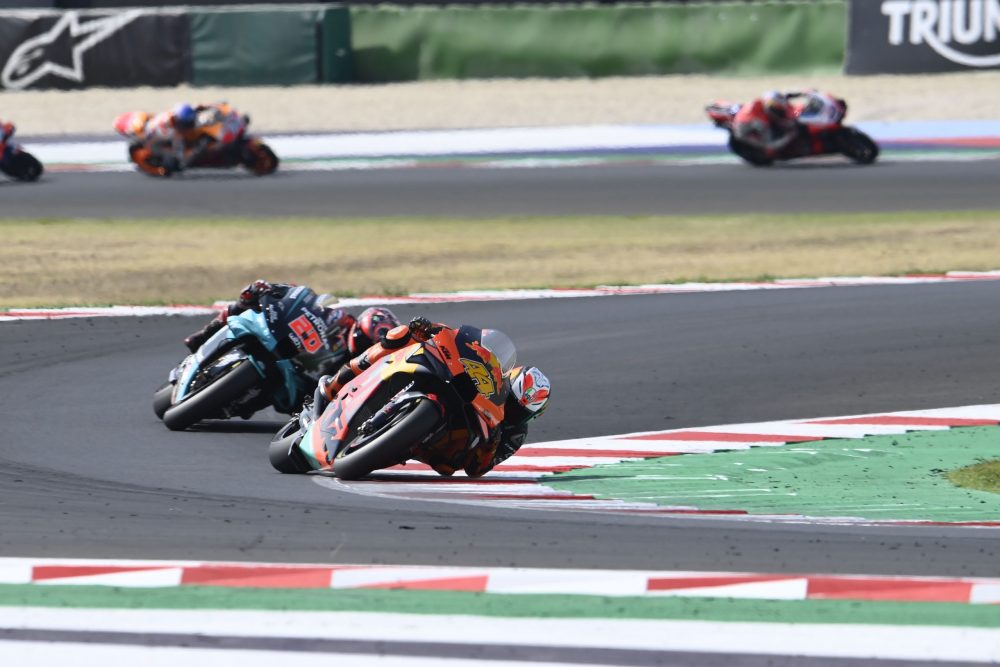 And the Suzuki man wasn’t afraid of rolling up his sleeves. With three to go he jumped on Quartararo at turn two in the race’s standout overtake. A lap later and he eased under Espargaro for second at turn one. The KTM was just off line and exposed. Quartararo took full advantage, diving into third at turn three. From there Mir rode to a richly deserved second, his third podium in four races. “I was really competitive in Austria. I got this kind of confidence and thought, ‘Why not repeat it?’”

The drama wasn’t over. On the final lap the FIM Stewards handed Quartararo a long lap penalty for exceeding track limits five times. Only seeing the dashboard message on the back straight, the Frenchman didn’t take it (the long lap penalty lane was before, at turn ten). He was handed a three second penalty, demoting him to fourth, behind Espargaro.

Behind Miguel Oliveira (Tech 3 KTM) was an excellent fifth, seven seconds behind. It had comfortably been the best race of team-mate Iker Lecuona’s career as he sat sixth, only to crash three laps from home. Takaaki Nakagami (LCR Honda) just led rookie Alex Marquez (Repsol Honda) home in sixth after crashing twice on Saturday. This was the junior Marquez’s best result to date. Dovizioso was never competitive for the second week running yet his eighth was enough to maintain the championship lead. Morbidelli, battling a virus all weekend, recovered to ninth, with Danilo Petrucci (Ducati Team) tenth. 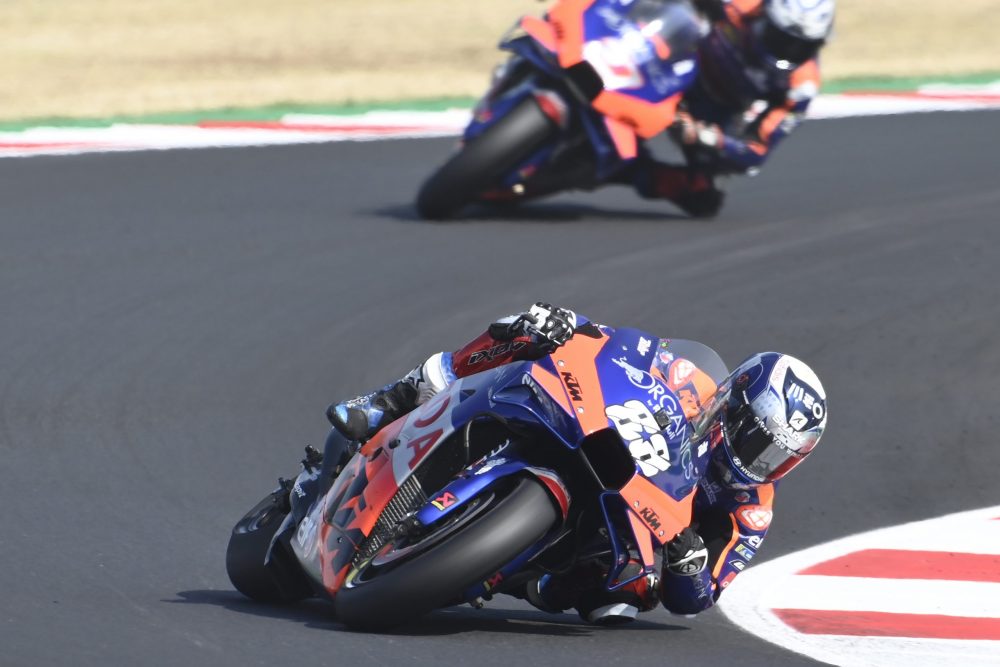 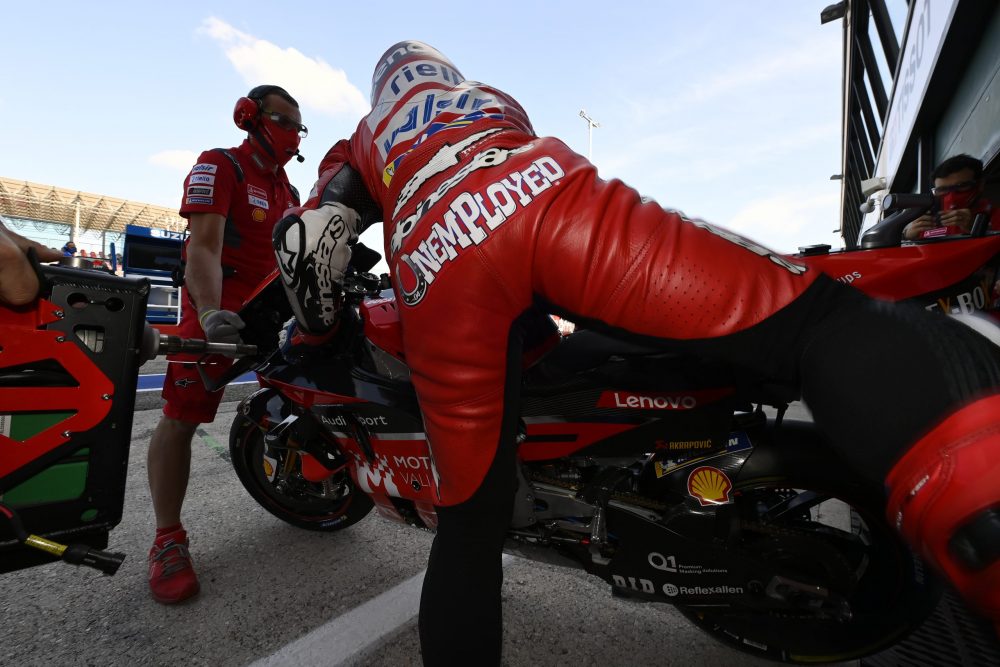