Yamaha has sold more than two million TMAXs in two decades. How can a maxi-scooter be so damn popular?

Not many current-model bikes can boast two decades of existence and seven generations of updates, but Yamaha’s TMAX maxi-scoot is one such machine. Released in 2001 at a time when scooters were selling in droves, Yamaha put a product in front of what was a huge global audience hoping it would capture the hearts and wallets of any one of those riders looking to upgrade to a larger-capacity machine – scooter, motorcycle or otherwise – and it worked.

That original 500cc T-Max was a hit, and it was the ‘otherwise’ part that it owes its success. Because even though it looked and rode like a practical scooter, its handling, performance and componentry belied its twist-and-go efficiency, and it earned itself a cult following in Europe and America that still exists today. 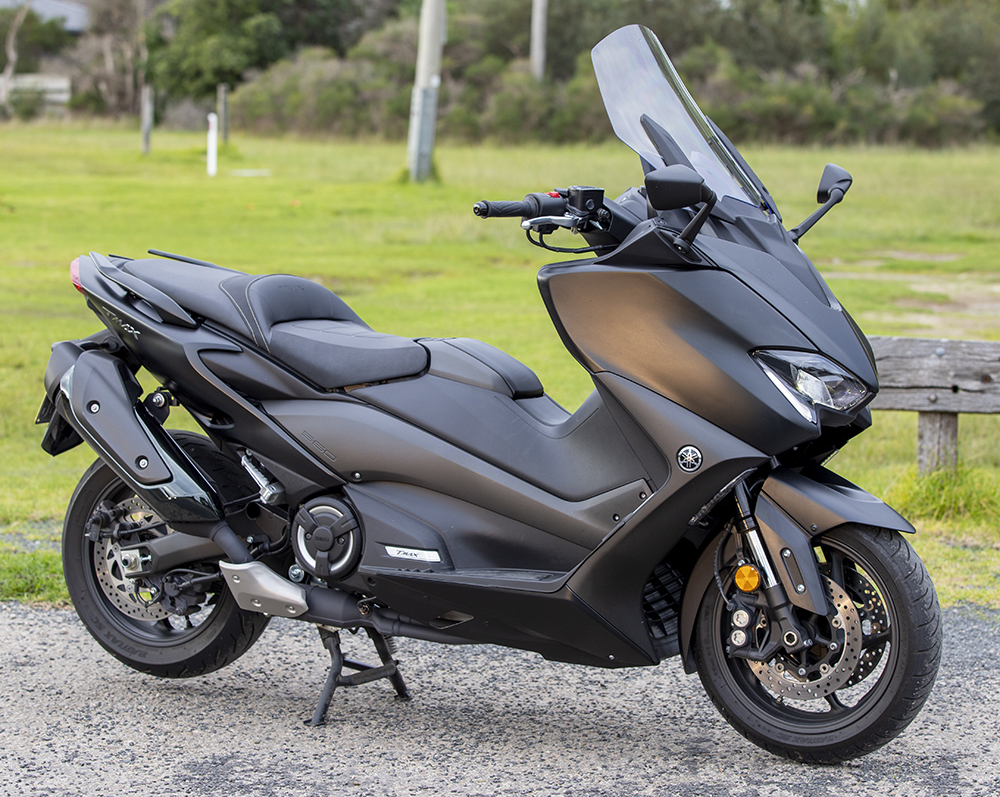 This newest edition still boasts all of those attributes which allowed Yamaha to write the book on sport focused maxi-scooters; sportsbike-like tyre profiles, a motorcycle-style chassis, a robust suspension package and high-spec brakes. And while it may not be flaunting all of the gadgets and aids we’ve come to expect from a 2021-model bike, its pedigree alone lofts it right up there with its European contemporaries.

Though not available in Australia, there is a higher-spec version on sale in other markets which does go some way to levelling the argument. While this standard version offers two switchable riding modes, ABS, traction control and a keyless ignition system, the up-spec TMAX Tech MAX adds cruise control, an electrically adjustable screen, heated seat and grips, rear-suspension adjustability and smartphone connectivity to the list of features. It’d add rather significantly to the price tag, too, so given the TMAX hasn’t enjoyed the same level of success here in Australia as it has in European and US markets, it’s not particularly surprising Yamaha Australia opted against it. And realistically, the gadgets and aids on offer on the standard machine are probably about where a $17K bike ought to be. 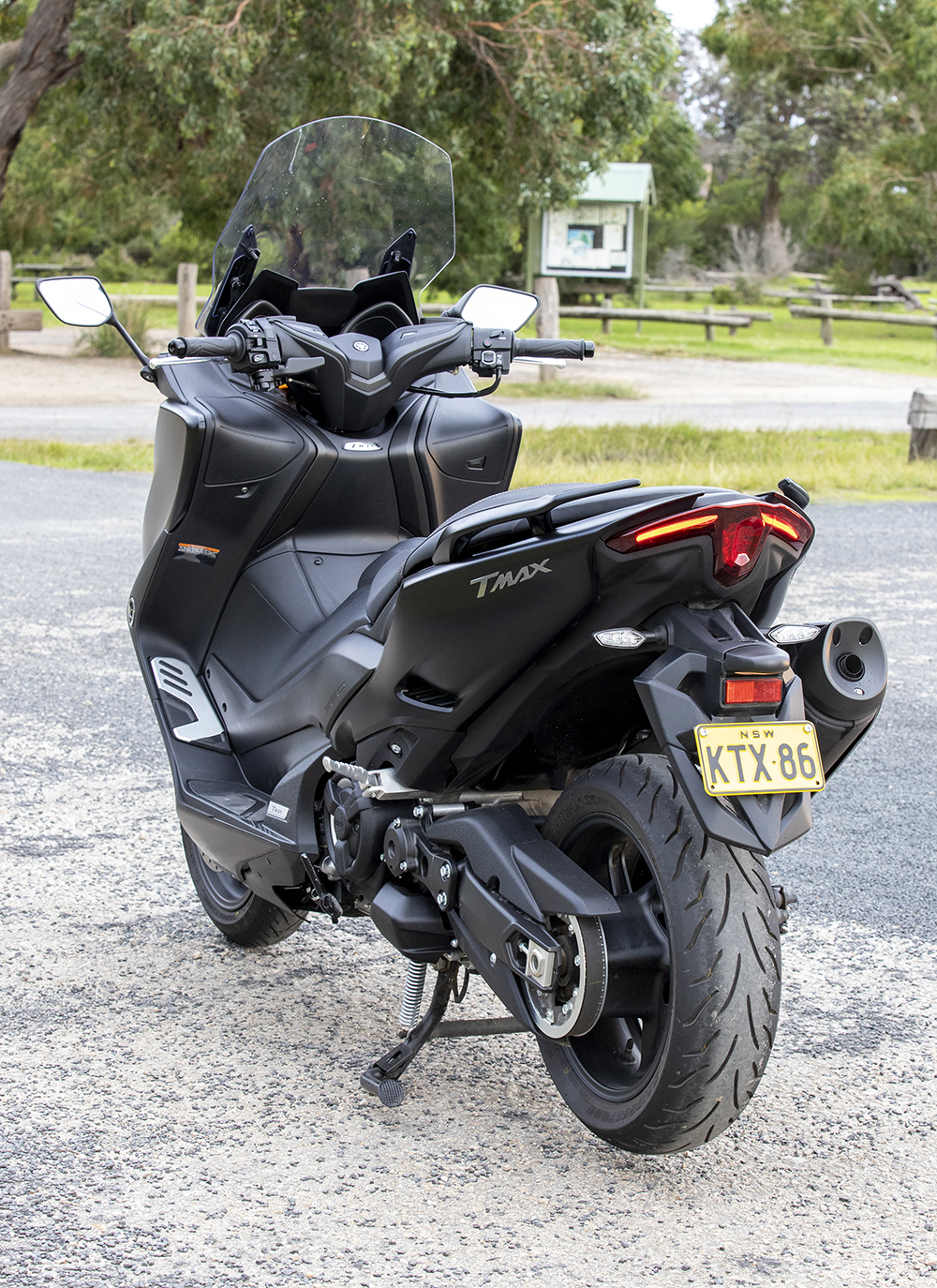 Start with the key fob; press the button on the fob to activate or unlock the scooter and its security systems. As well as being a proximity key for the ignition in order to start the engine, the button on the fob allows you to deactivate locking mechanisms on the underseat storage, the fuel cap, the steering and, cleverly, the centrestand. To a would-be opportunistic thief, not being able to push the TMAX quickly off the stand and into the back of truck, a lockable centrestand could be the difference between you walking out of your office and finding you still have a scooter, and not. It’s a feature that should be more widely used.

Once unlocked and activated, straddle the TMAX and you’re immediately aware of its girth. At 800mm it’s not a particularly high seat, but it is quite wide (450mm at its widest point) which, combined with its bulbous bodywork, makes for a long way down to the ground. But its low centre of gravity makes it feel really manageable, even for particularly short riders like myself. 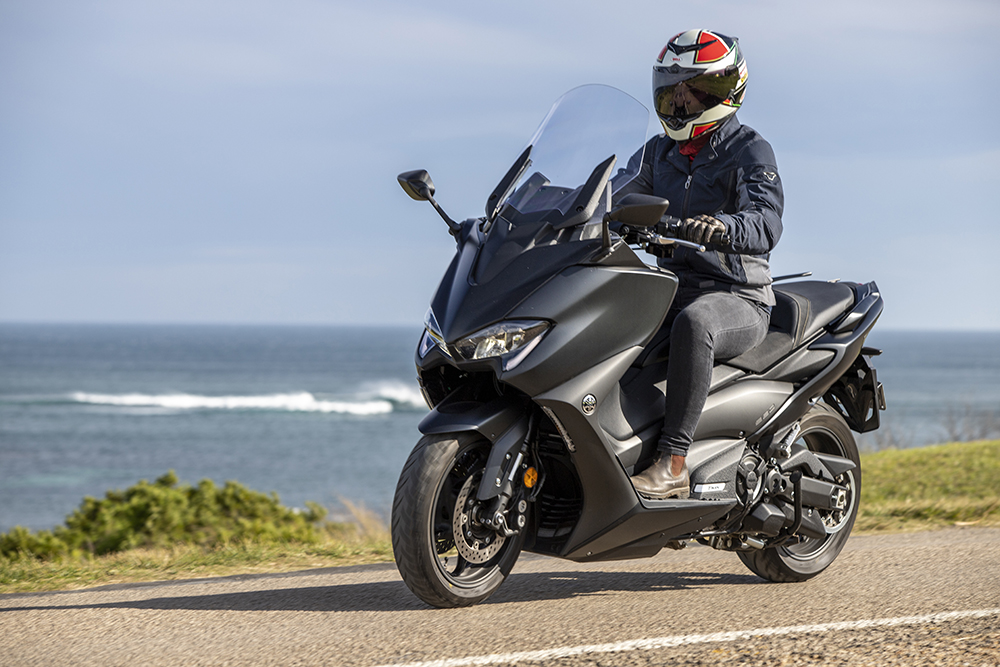 The same button on the dash you use to wake the ignition up starts the engine, but only if you have the sidestand up and one of the two brake levers pulled in – you can warm it up on the centrestand while you get ready, just not the sidestand. The updated parallel-twin engine whirs into life and immediately lets you know there is more than your typical scooter going on under all that plastic bodywork.

In fact it’s always been like that. When the 499cc parallel-twin version debuted in 2001, it was the biggest engine ever employed in a production scooter, Yamaha or otherwise. It increased to 530cc for the 2017 model year and in 2020 it increased again to a 562cc Euro-5 compliant motor. The capacity increase is thanks to a 2mm wider bore which, according to Yamaha, results in a six percent increase in both capacity and torque, giving the 218kg TMAX almost 56Nm of get up and go. 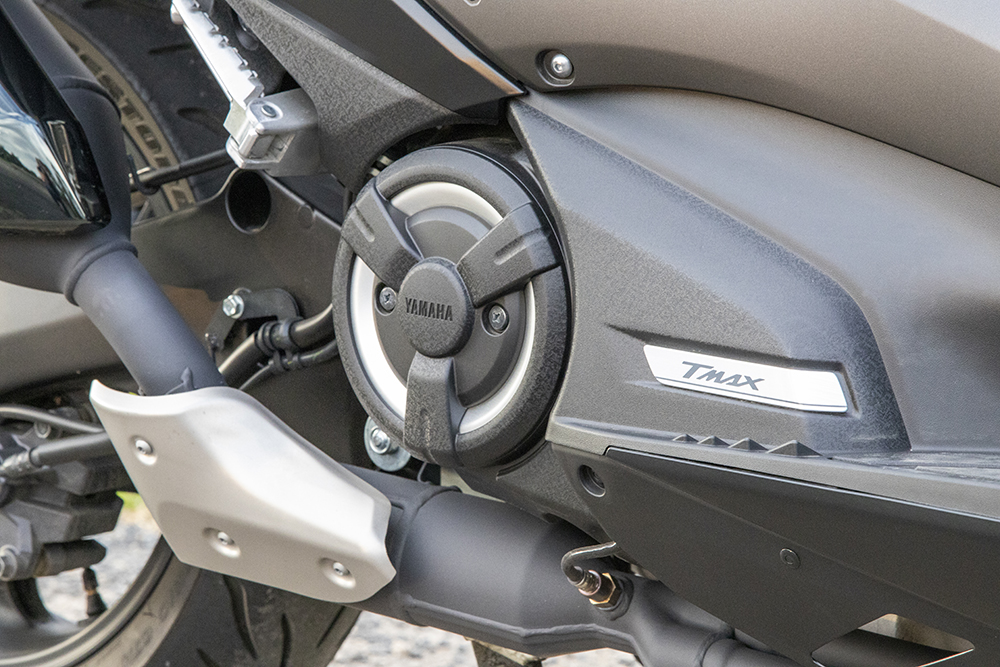 And the acceleration is impressive. Between the extra newton metres and revised reduction ratio within the gearbox, the TMAX gets off the line as quick as any other roadbike and the continuously variable transmission ensures it happens in the most efficient way.

Try as I might, I couldn’t feel much difference switching between the Sport and Touring modes, either under hard acceleration from a standstill or performing higher-speed roll-ons, both modes give you reliably strong acceleration in both scenarios.

Even at highways speeds; I was travelling behind a 4WD and we approached an incline. As the large passenger vehicle slowed slightly as it laboured up the hill, I was able to accelerate cleanly and quickly up the hill and past the vehicle, before settling quickly back into the 110km/h posted speed limit. The TMAX leaves more than a few surprised faces in its wake and that alone makes it fun. 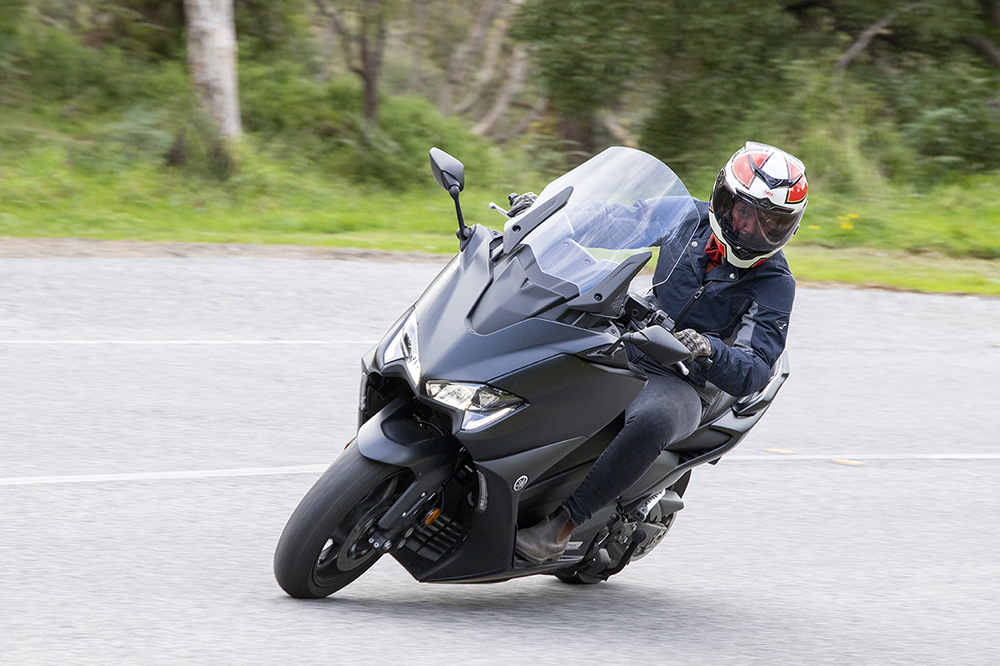 Despite the LED lighting and daytime running lights, I’m not sure the TMAX is hugely visible on the road – especially this darker-coloured one. The low-mounted headlights and even lower, less conspicuous indicators don’t do a lot for visibility – riding on a grey day, I had two cases of cars pulling out in front of me before two very apologetic waves after I audibly made my presence known.

It was at this point I realised the radial-mounted brakes – which visually appear to be the same calipers from the firm’s mid-2000s YZF-R1 and FZ1 machines – are effective in stopping the long and low maxi-scooter. But I had a little bit more time than I’d like to think about how I’d prefer just a little more power from the package as I was squeezing them both on with hopeful force. In everyday scenarios, they’re excellent. But if I owned the TMAX, I’d look at upgrading the pads for those unexpected other times. 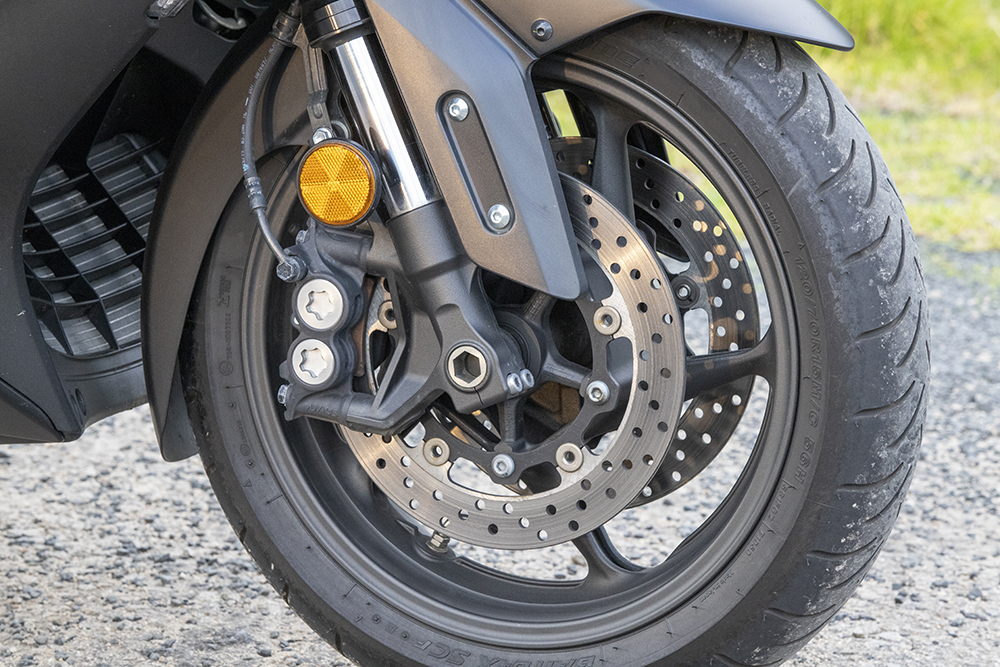 Less scooter and more motorcycle, the TMAX’s suspension and engine are completely separated in their functions and it makes for a really intuitive ride quality for motorcyclists. The non-adjustable suspension package is pretty effective in its base setting and, despite rolling on 15-inch wheels, any flightiness or instability felt as a result of the smaller-diameter wheels is counteracted by the long, low and relatively heavy package. At 1575mm, it boasts the same wheelbase as Honda’s Africa Twin and weighs just eight kilograms less than the 1100cc adventure bike.

So what should be a twitchy and off-putting affair on 15-inch wheels, navigating bumpy backroads at speed on the TMAX is a stable and planted one, helped not only by its sheer size and low centre of gravity, but by its sportsbike-like tyre profiles, twin-spar chassis and a suspension package that has the benefit of 20 years of refinement. 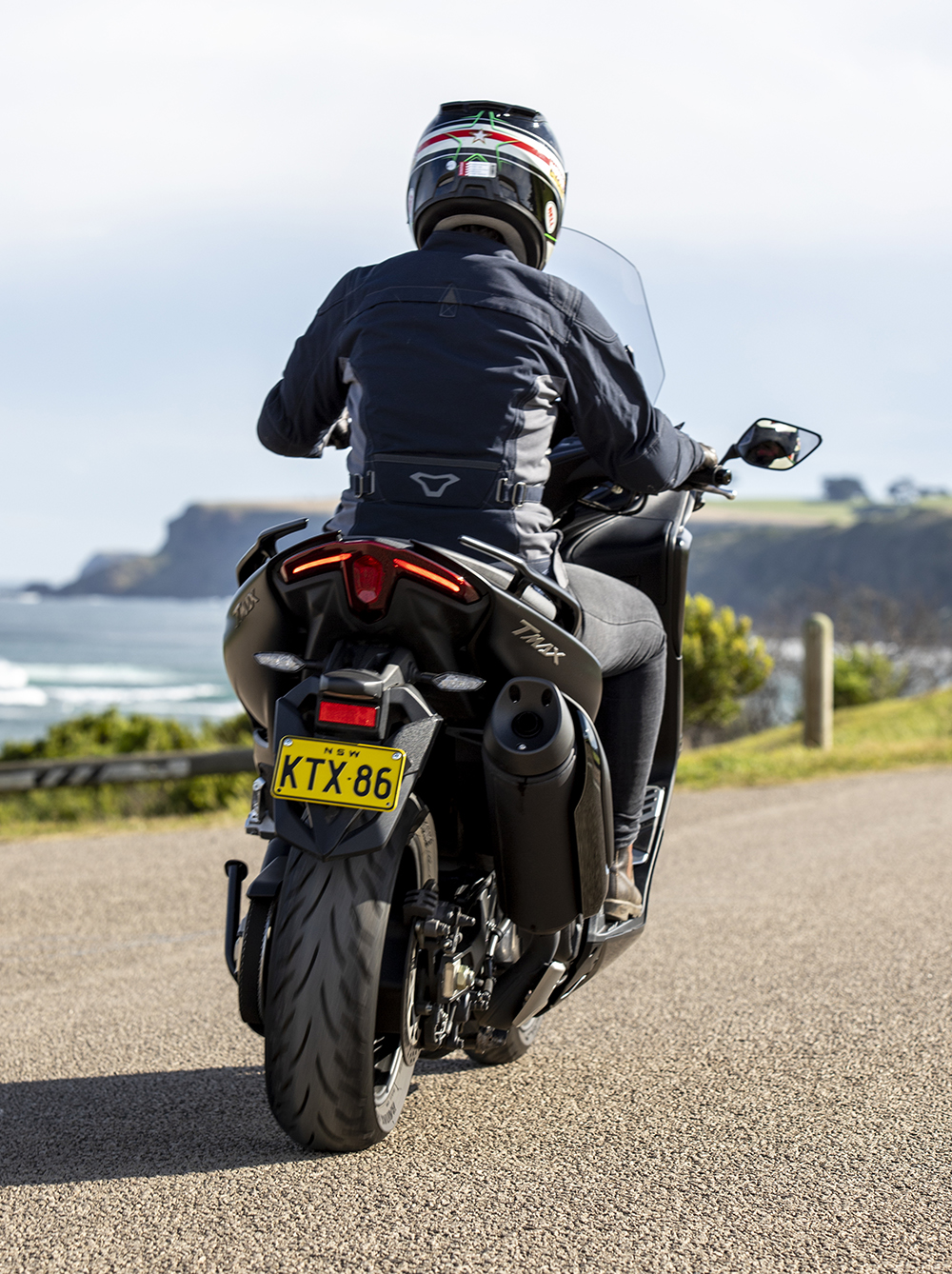 But it’s also the kind of refinement that really should afford a sports-touring maxi scooter an adjustable windshield. With Yamaha’s know-how and the TMAX’s legacy, there’s really no excuse for such a large screen to be a fixed unit. Sure, there are genuine options on offer, but if the up-spec Tech MAX can boast an electrically-adjustable screen, the base model should offer a small amount of manual adjustment at the very least.

In saying that, the dash is bright and informative. Old-school analogue-style speedo and tacho readouts flank a new-school TFT screen in the centre. As well as greeting you with a welcome message on wake up, it offers plenty of info in a monotone (ie, not colour) display – as well as everything you’d expect; the highlights for me are the air-temp, clock and range-until-empty. 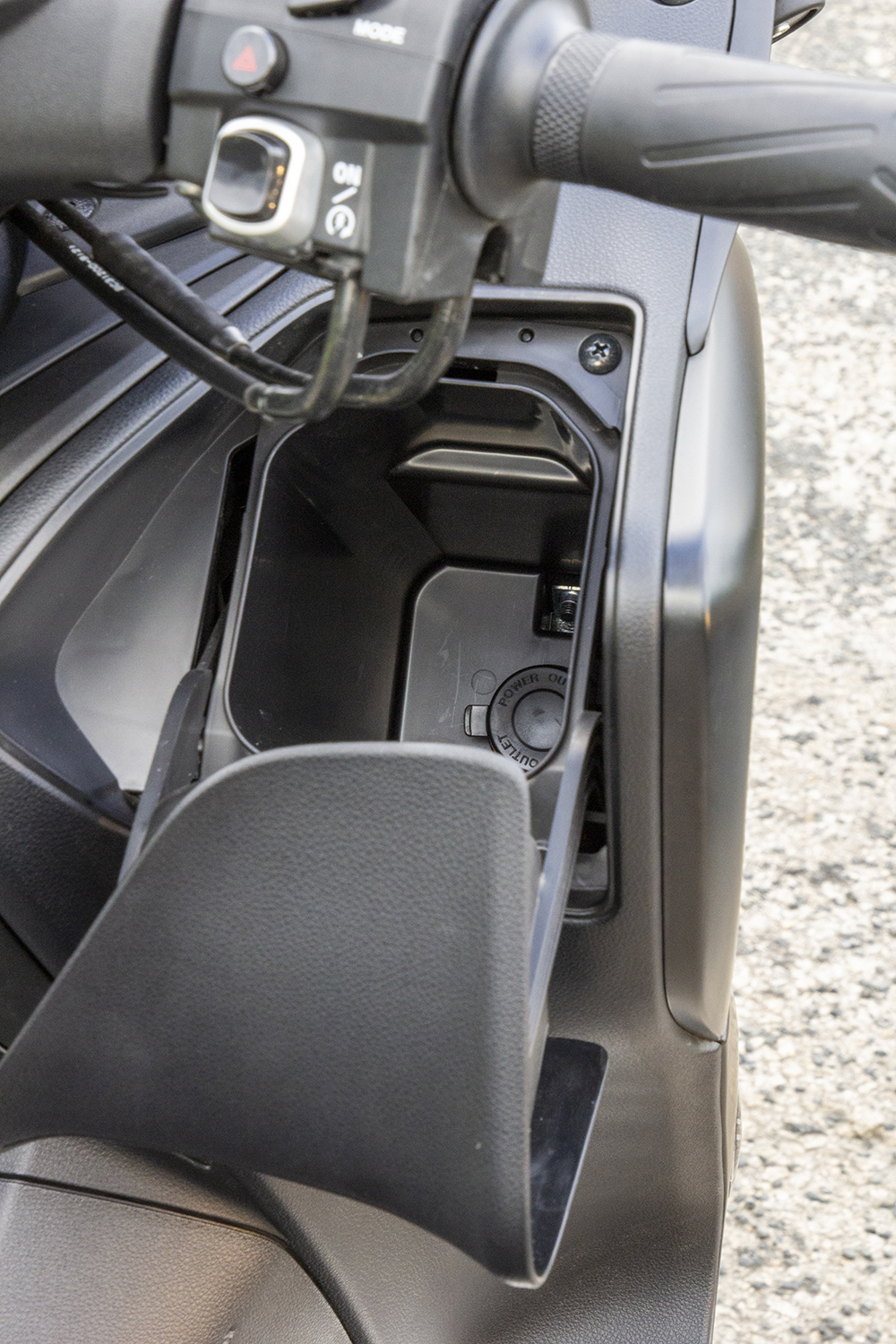 The mirrors are excellent – completely vibration free at any speed, and neat touches like the 90-degree valve stems, illuminated underseat storage area and meaty-sounding exhaust are all really well-thought out features that come with seven generations of development and which make the TMAX an easy bike to live with.

And frankly, easy to live with is exactly what Yamaha’s maxi-scooter represents. It’s versatile, it’s practical, it’ll get your groceries, it’ll get you up your favourite mountain road or across the other side of your state with little fuss. And while Australians may be too interested in street-cred and egotism to welcome a maxi-scooter into their list of would-haves, a bit of time with the 2020 TMAX 560 makes it pretty easy to understand why the moniker is one of Yamaha’s most popular models of all time. 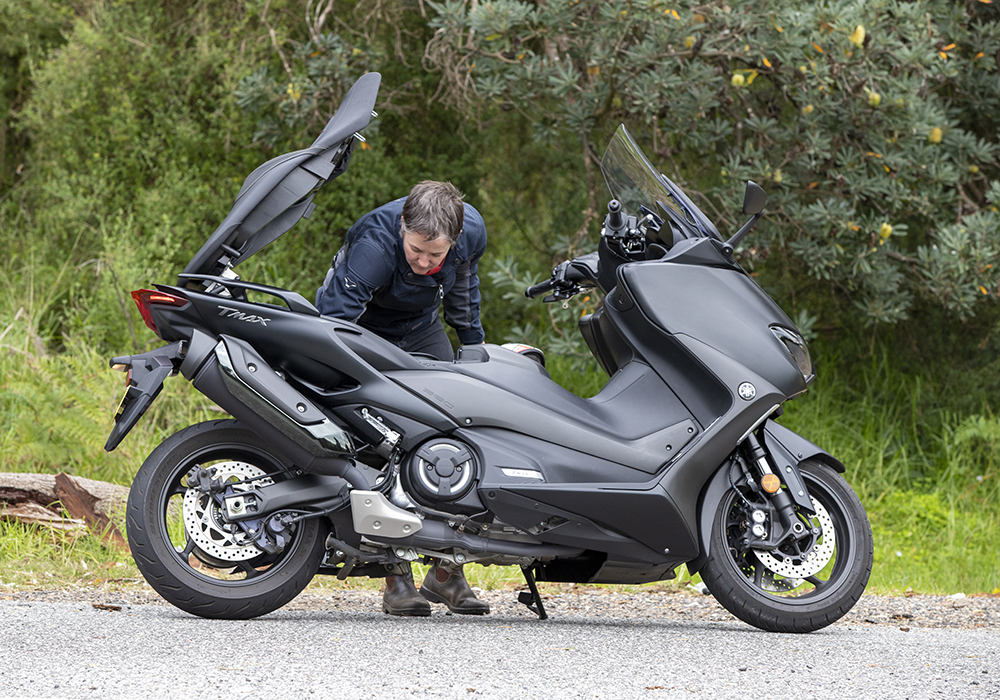