Building on a shared passion for beauty, precision and performance, and inspired by the shared historical significance of the iconic 1959 Les Paul Standard and equally iconic 1959 Bonneville T120, the outcome of this unique partnership is a stunning one-of-a-kind custom edition of today’s generation of each legendary model. 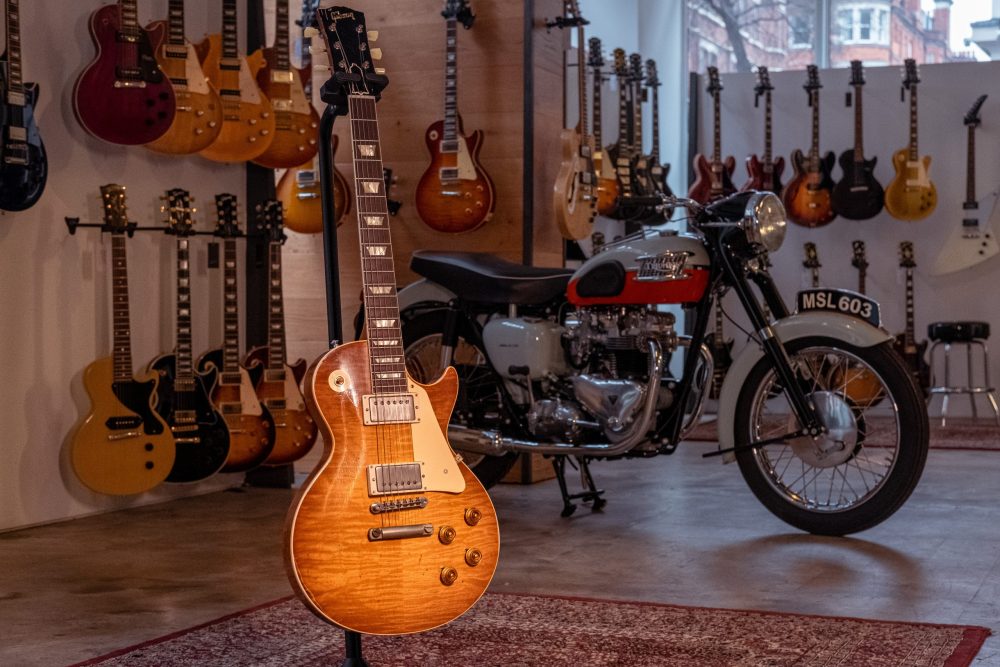 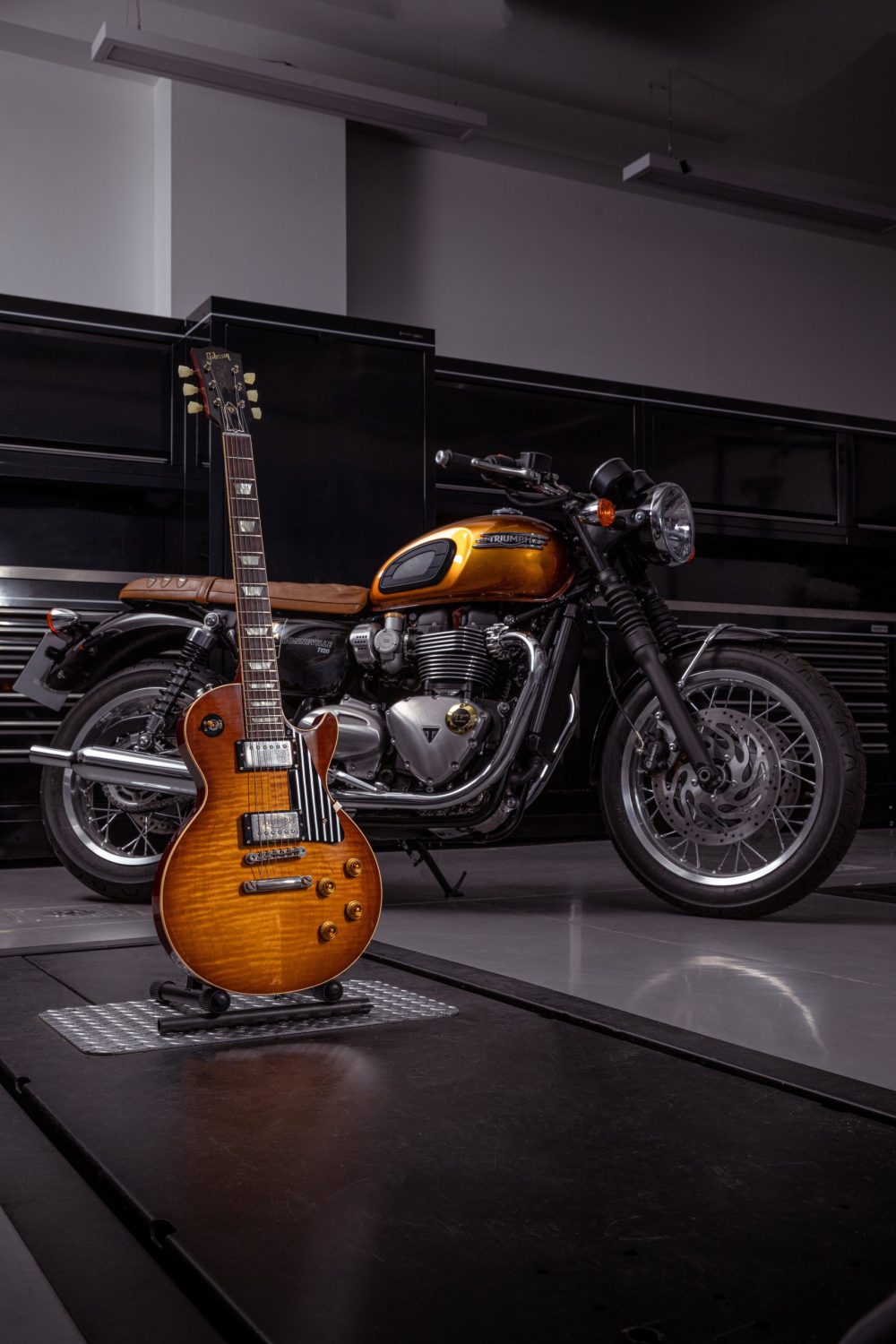 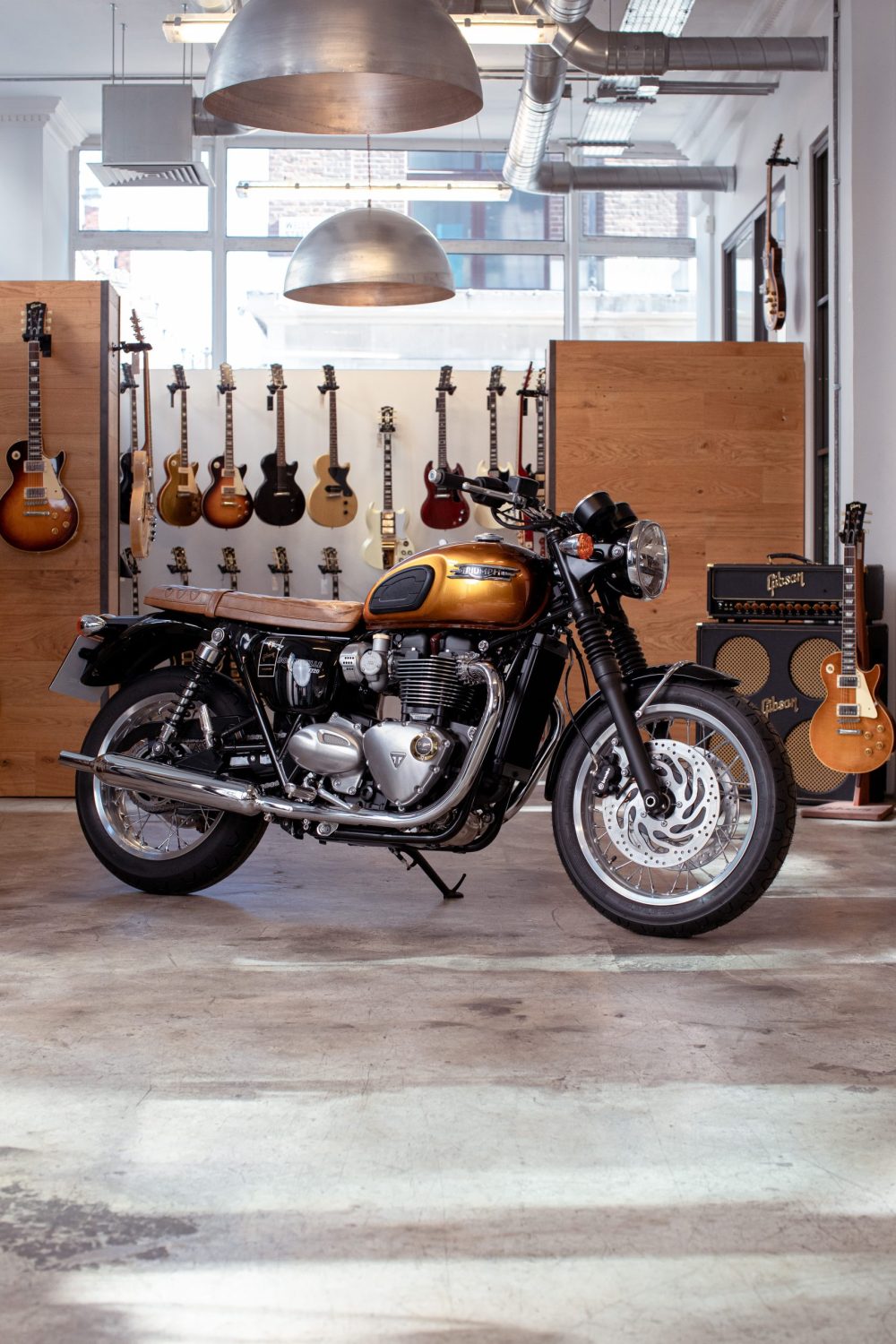 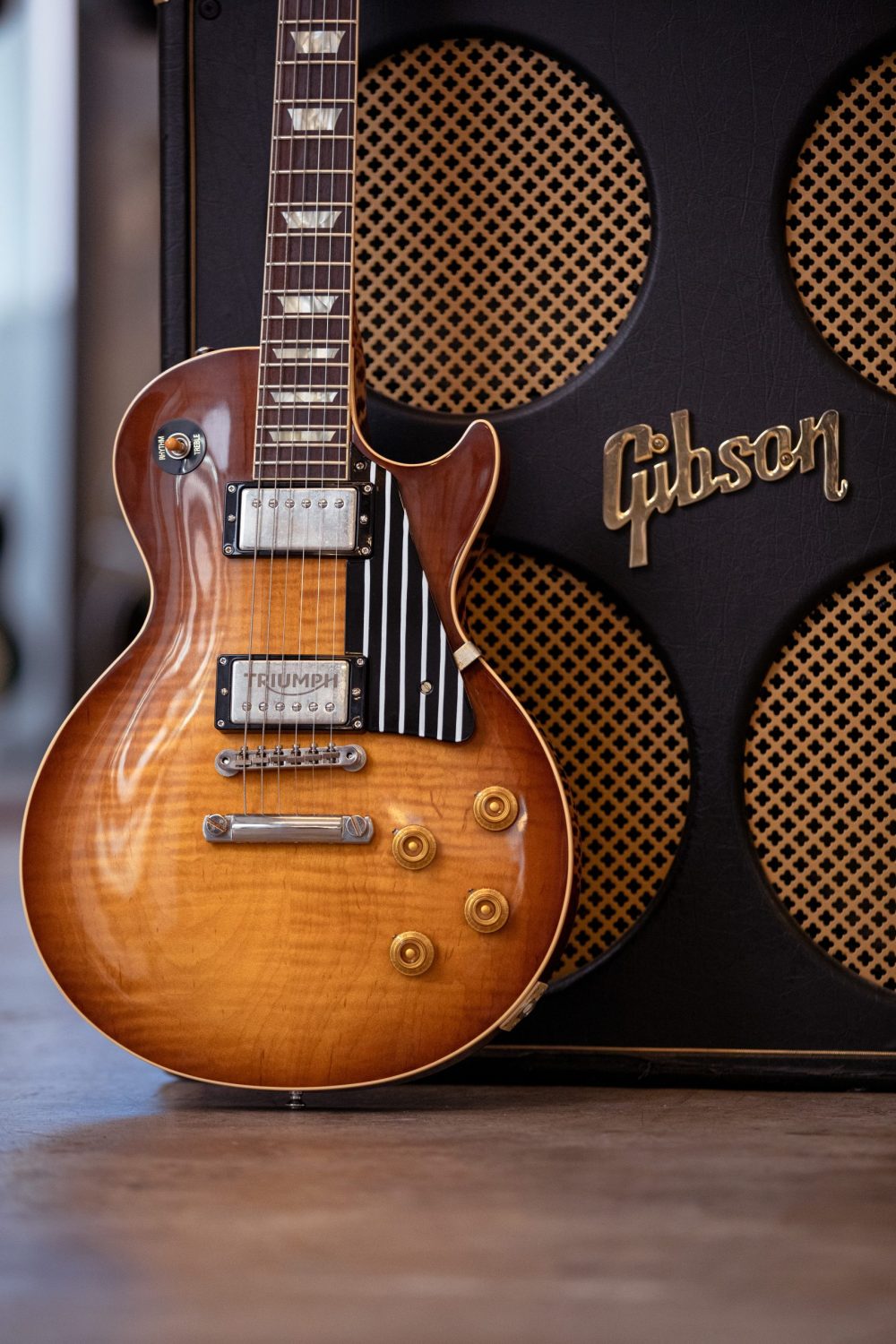 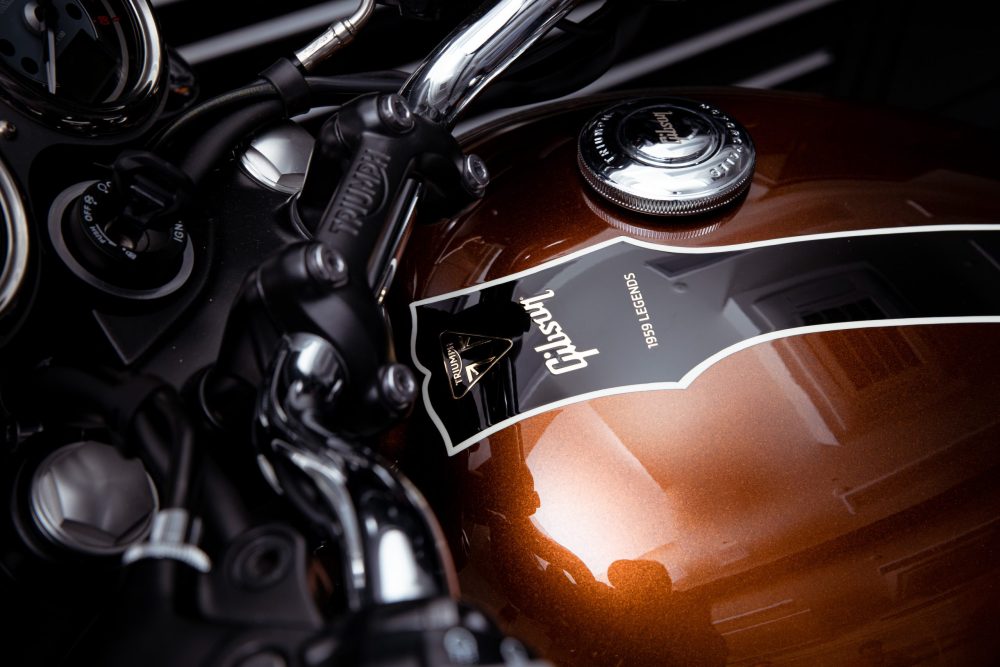 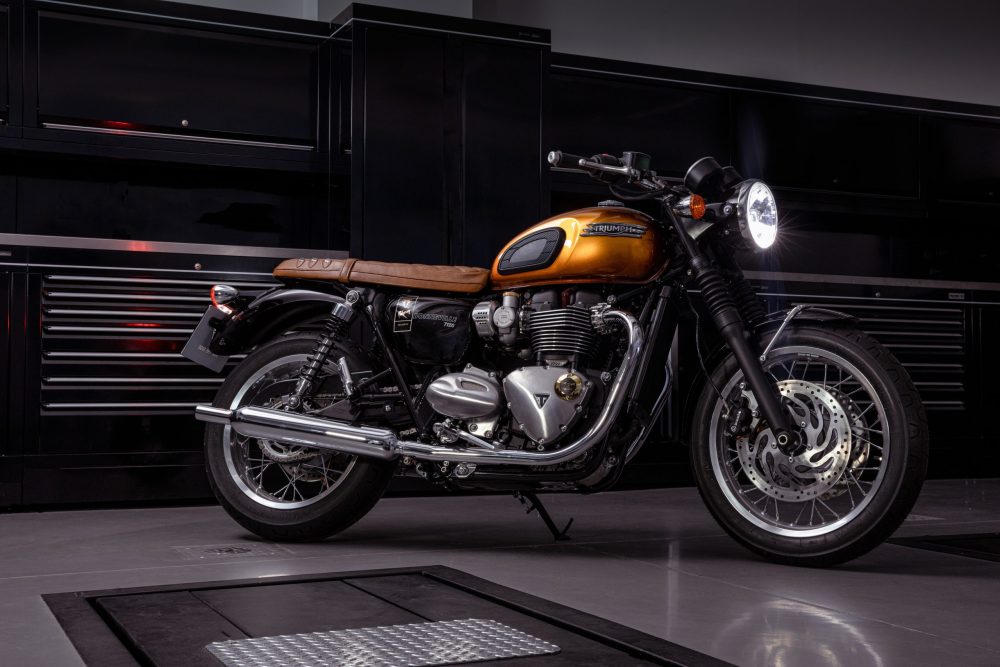 Celebrating the shared historic resonance of the year 1959, the custom collaboration project honours the two iconic products central to each brand’s story – the 1959 Gibson Les Paul Standard and the 1959 Triumph Bonneville T120, both considered to be the holy-grail of their worlds, and both still manufactured and sold today. 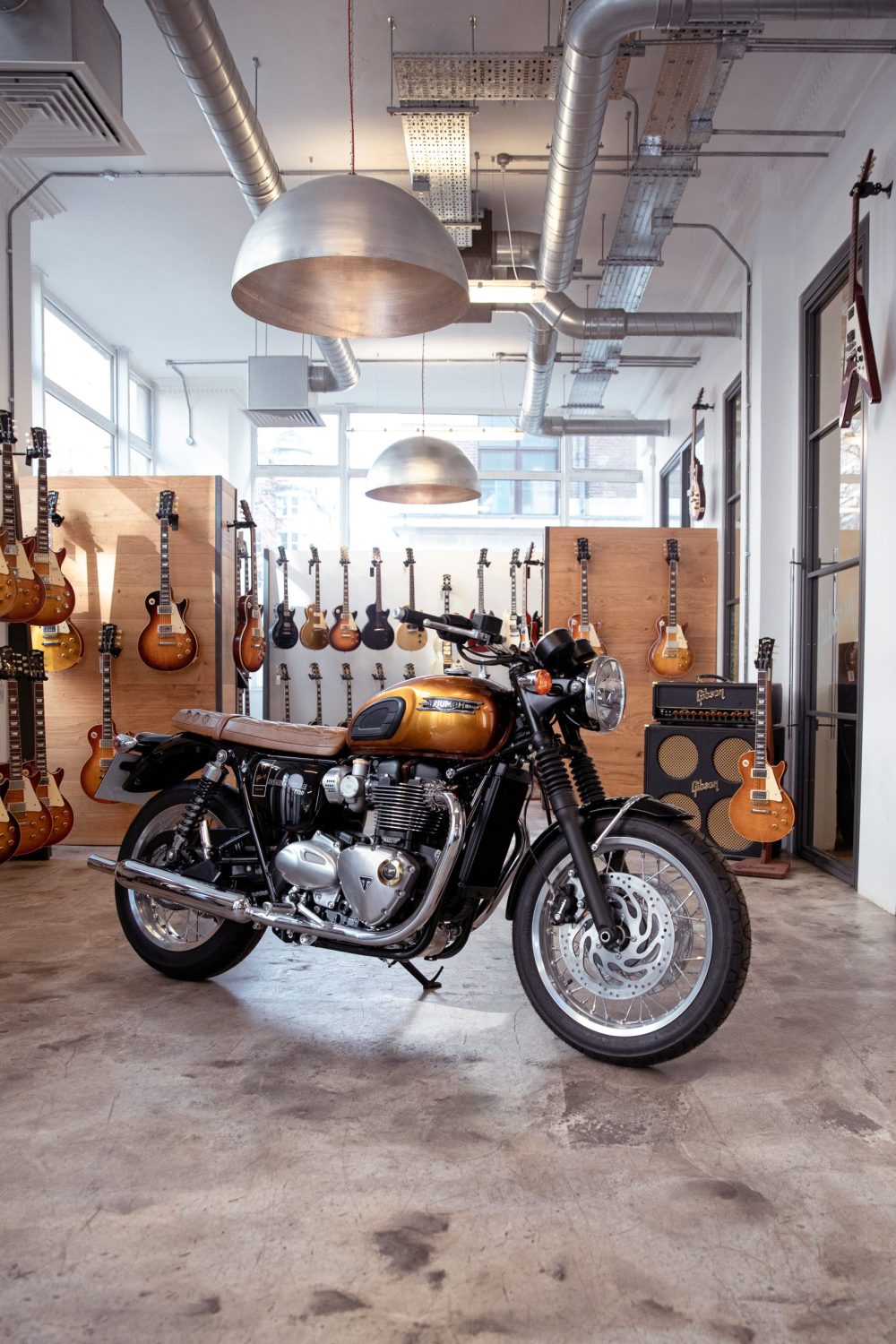 A genuine guitar icon, and a priceless music legend, the 1959 Les Paul Standard is the ultimate Gibson classic. And the Custom Shop 1959 Les Paul Standard Reissue is more than just a tribute, it’s an authentic and accurate clone. Matched to that, the ultimate classic motorcycle icon, the legendary 1959 Bonneville T120, delivered ground-breaking performance, making it the original British superbike. While today’s equivalent, the category-leading Bonneville T120 combines that timeless character and style, with modern capability and performance. 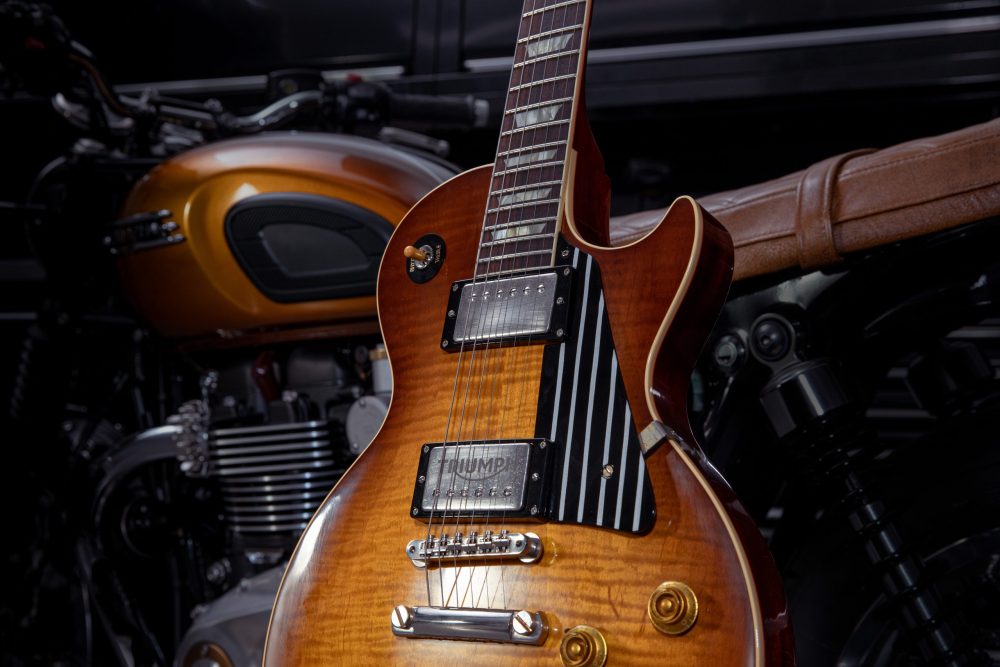 Inspired by the shared 1959 history and the enduring connection between music and motorcycle culture from the birth of rock and roll to the teenage café racer and beyond, Gibson and Triumph set out to create a unique custom edition to highlight and support the incredibly important fundraising aims and passion of The Distinguished Gentleman’s Ride. 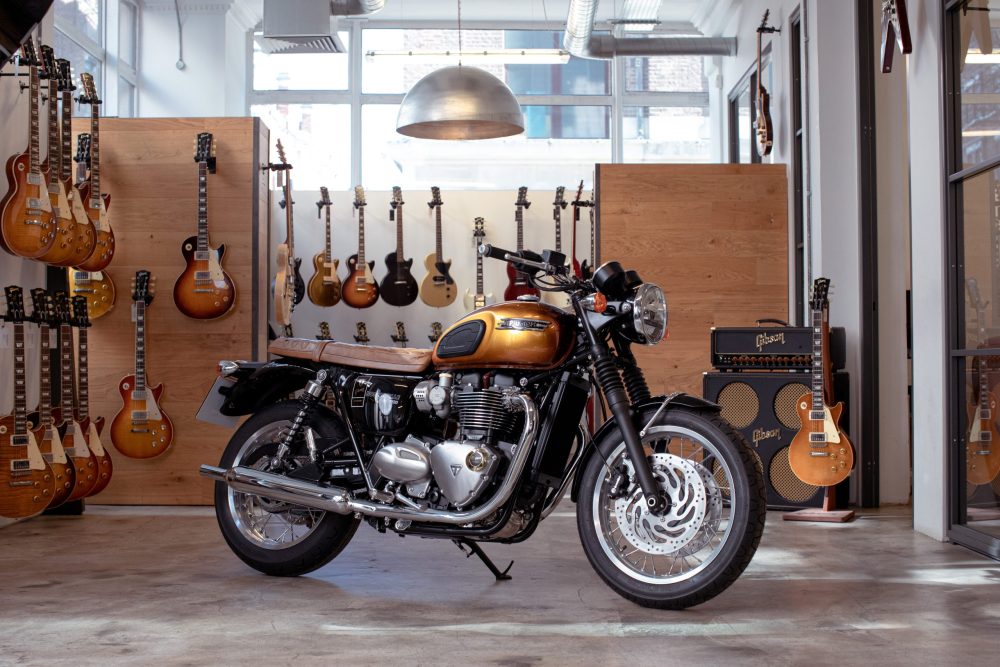 Reflecting the passion that Gibson and Triumph designers share for beautiful design, precision, performance and world-class craftsmanship, the 1959 Les Paul Standard Reissue and Bonneville T120 were chosen to be hand-customised by Triumph’s world-leading design team at the Triumph factory workshop in Hinckley, the global HQ and home of Triumph. 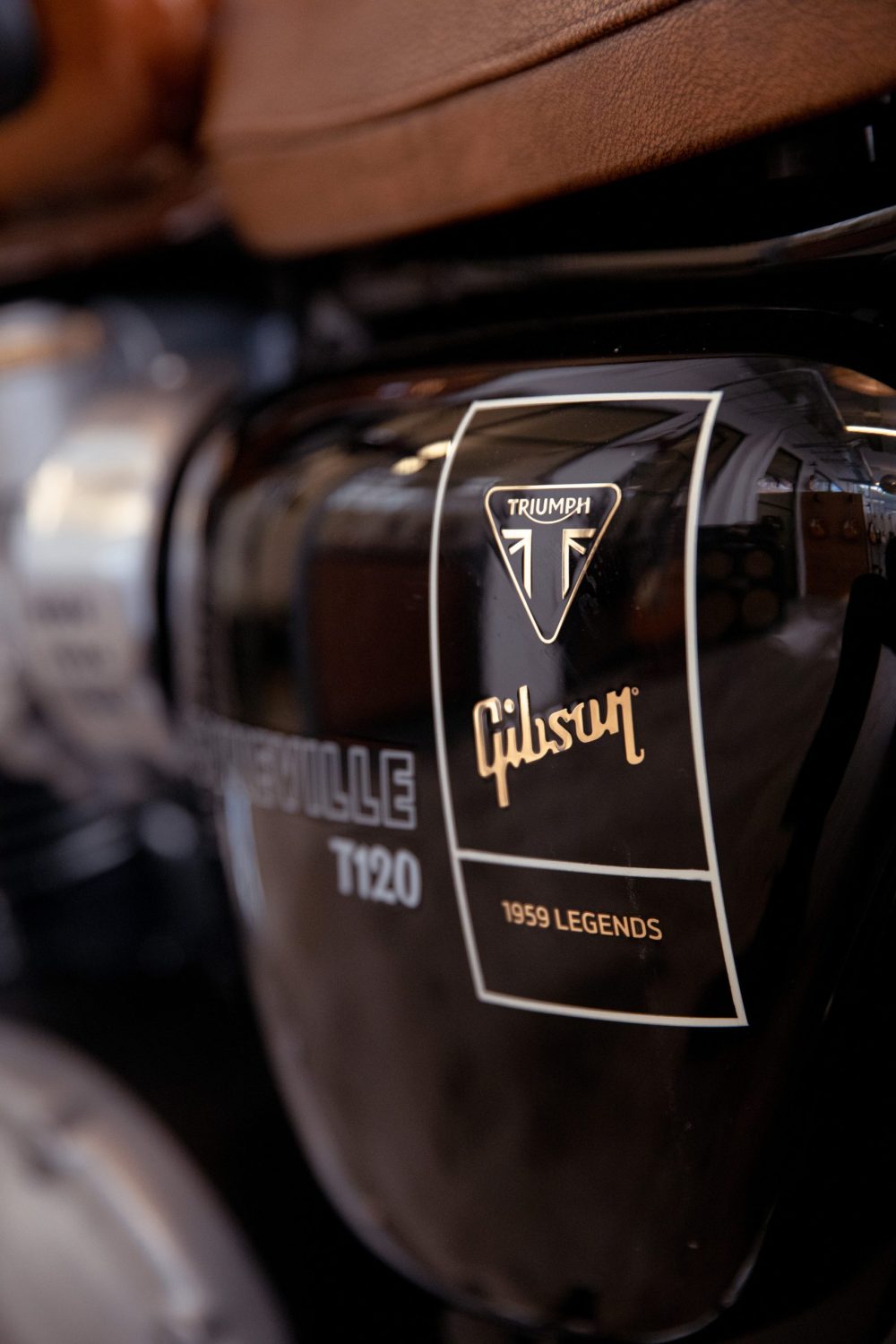 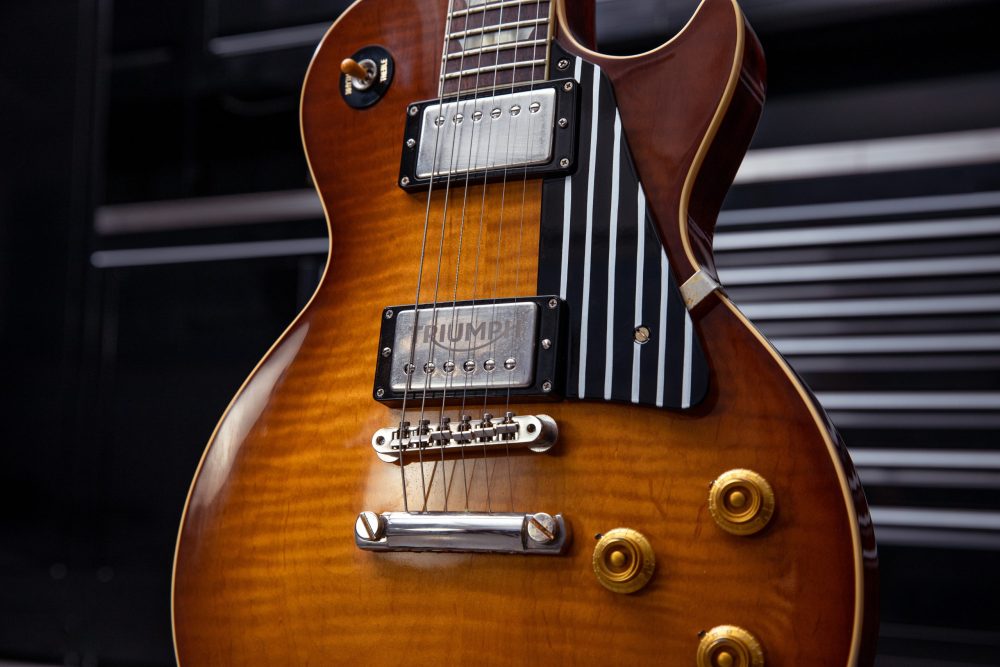 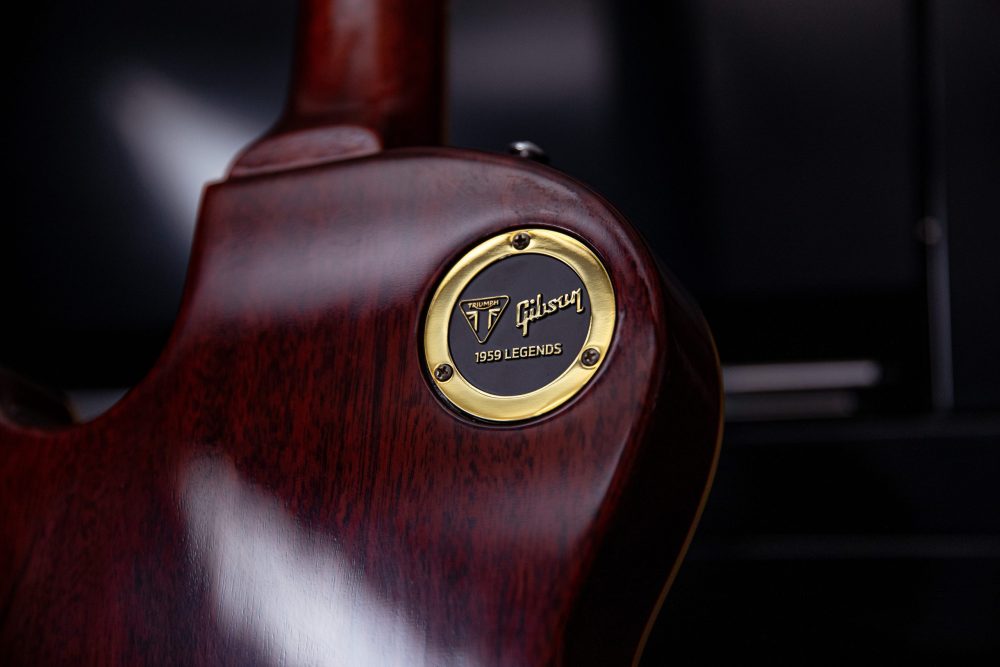 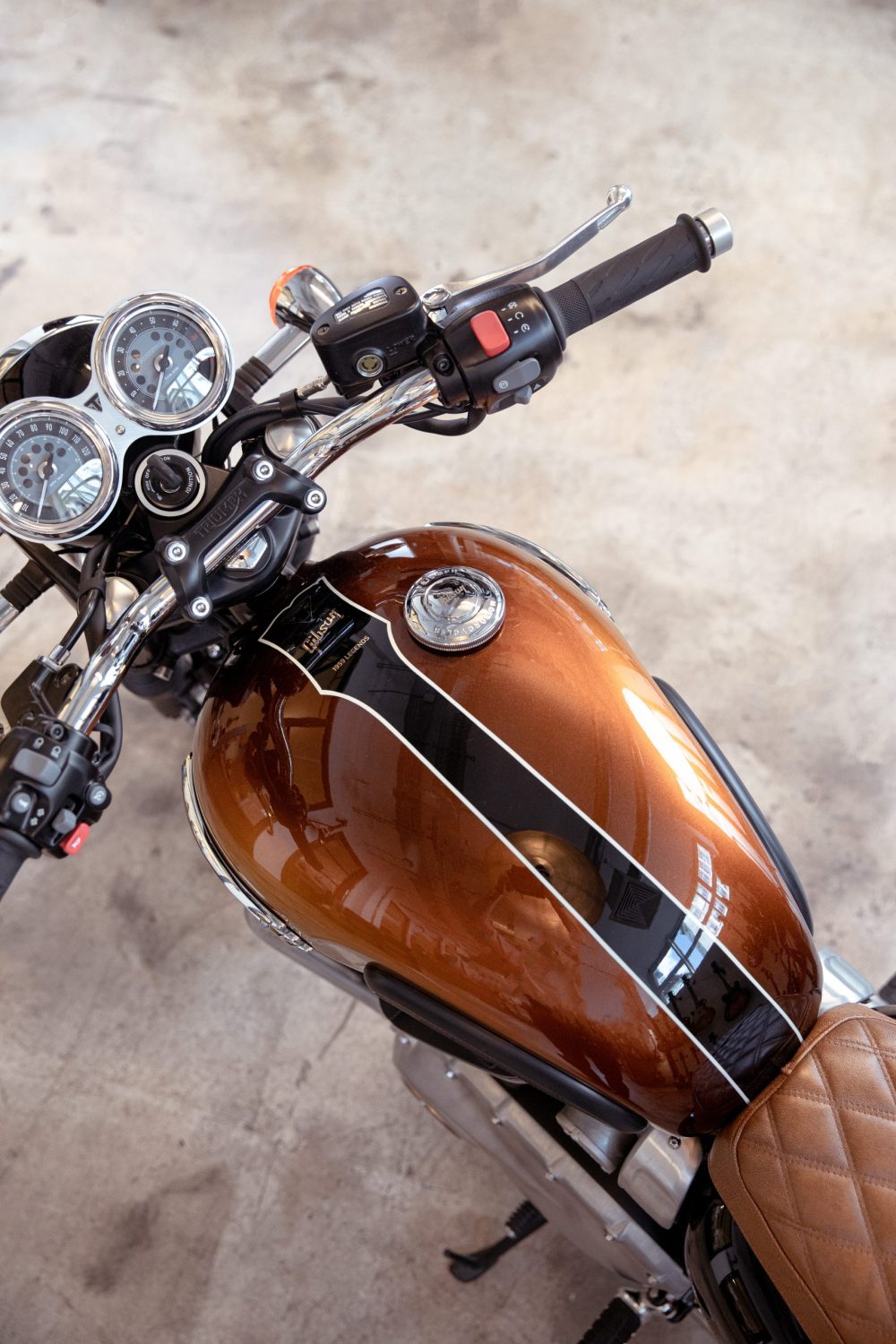 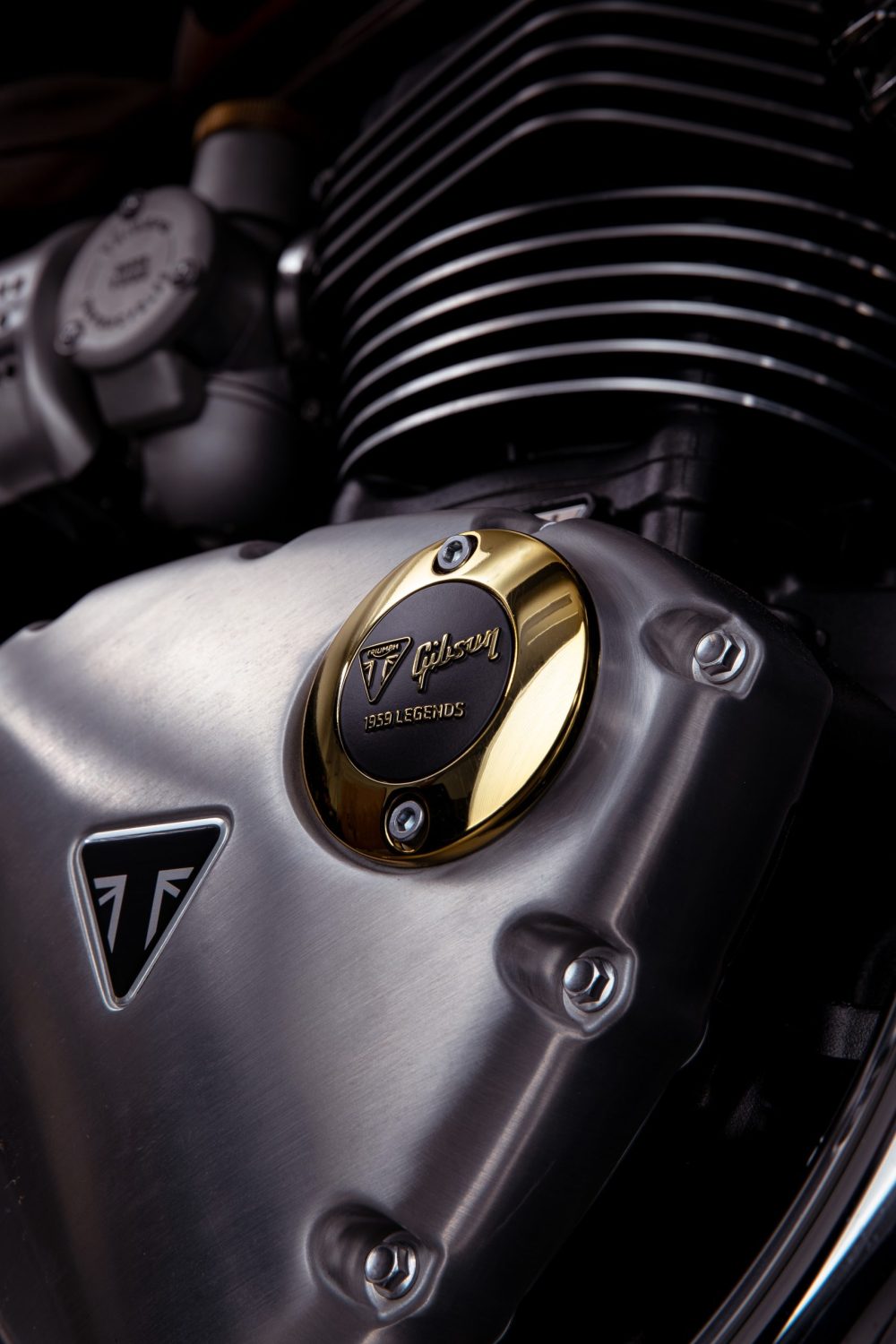 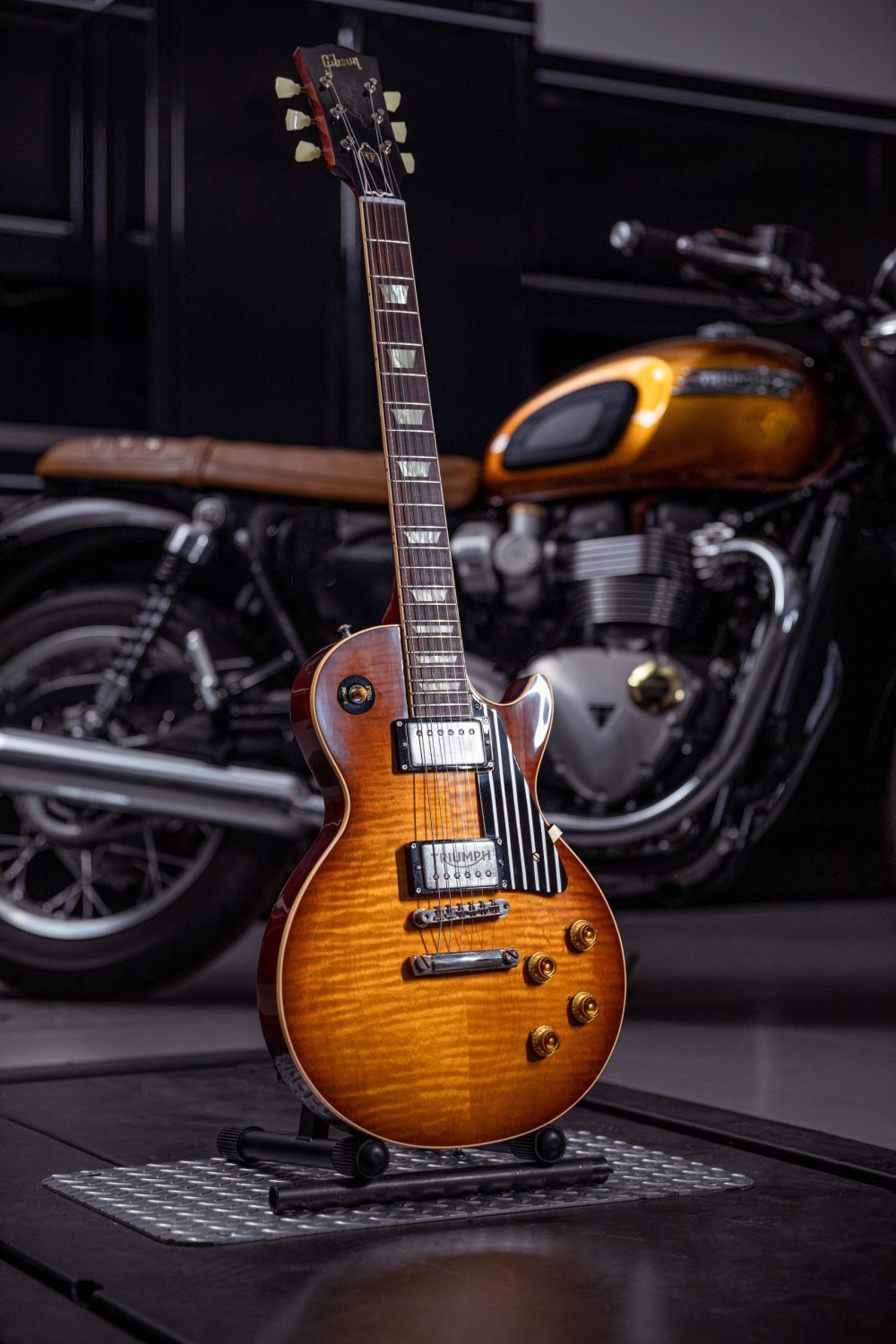 The Gibson Les Paul is practically synonymous with rock and roll, becoming the go-to axe for countless guitar heroes including Led Zeppelin’s Jimmy Page, Aerosmith’s Joe Perry, and Guns N’ Roses’ Slash. It’s as versatile an instrument as it is iconic, and in the right hands can wring thunderous riffs, molten solos and warm, clean tones from it in equal measure.

Known as the Holy Grail of Guitars, the 1959 Gibson Les Paul Standard represents the pinnacle of electric guitar innovation during Gibson’s enduring golden age. The Gibson Les Paul Standards from 1958 to 1960 are among the most collectible vintage guitars in the world, with the Gibson 1959 model as the most highly coveted of all. No specific Gibson guitar carries more intrigue and gravitas than the 1959 Les Paul Standard. Rare and highly-collectible, it has become the most iconic guitar in history, (under 650 were made), and before long, it was adopted by some of the world’s greatest guitarists – Jimmy Page, Keith Richards, Eric Clapton, Jeff Beck, Duane Allman, Mike Bloomfield, Billy Gibbons, Joe Perry, Slash, Joe Bonamassa, Rick Nielsen and Jason Isbell, to name a few.

“It’s just a beautiful guitar and a fantastic instrument, and obviously it was adopted by dozens of hugely influential players,” says Mat Koehler, Senior Director of Product Development, Gibson Brands. “Guitar gods all favored this model. So, when you put that all together, it’s no wonder why the values are large fractions of a million dollars for originals.” 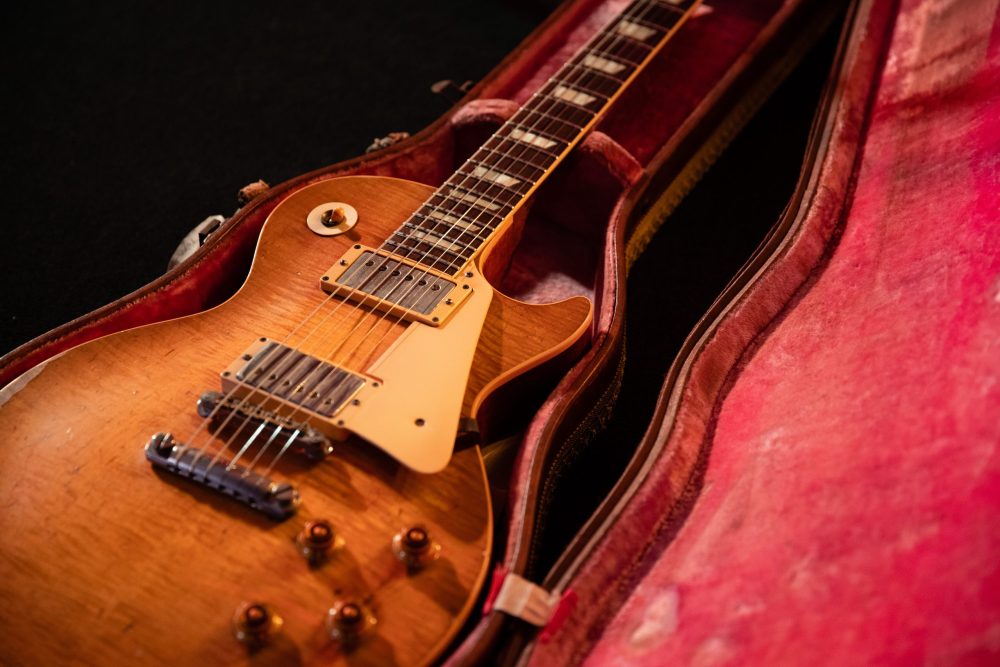 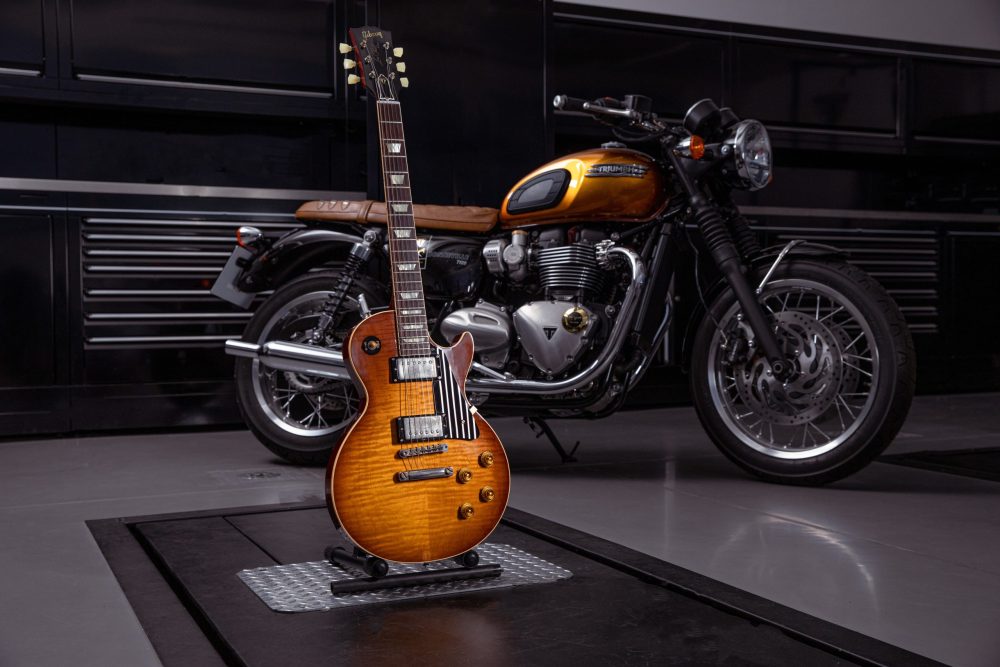 AMCN's News Editor Chris Dobie has just wrapped up a two day test of the new Ducati Multistrada 1200 and 1200S at the world launch in Spain.