THE TESI TANGO | He did what?

That time when Alan Cathcart was a fully-supported factory Bimota rider...

“We’ll supply and maintain the Tesi 1DR Corsa,” Bimota CEO Giuseppe Morri said to AMCN’s long-time contributor Alan Cathcart in October 1990. “You take care of the running expenses and race it wherever you wish. You’re free to publicly comment about any aspect of the bike, but we ask you to race it with the stock bodywork and colour scheme to underline its closeness to our production model.”

And that’s how Cathcart became a factory racer with full works support. That Ducati-powered Bimota Tesi is still the most avantgarde series production motorcycle yet created and after testing the prototype Tesi 1D roadbike in mid-1990, Cathcart was convinced it represented a viable look into the future of motorcycle design.

He received a bike fitted with a 964cc desmoquattro Ducati Superbike motor capable of 128hp at 10,500rpm which, compared to Doug Polen’s 140hp 1991 WorldSBK champion Ducati, was competitive in ProTwins.

The aim was to enter all the leading ProTwins/BotT events around the world, starting with Daytona. The Tesi wasn’t the fastest thing on the bankings but it handled well in the infield and the braking potential was outstanding.

“This introduced me to Chapter One of the Tesi Textbook,” Cathcart said.

“To reap full benefit of the design – its phenomenal braking – you must re-programme your judgement of feasible braking distances. With steering and braking functions separated, I could brake unbelievably late for a turn, and still crank over into the apex while squeezing the lever as hard as the front tyre would let me.

“I’d tested the earlier Tesi prototypes, so was already used to the lack of front-end dive that’s the main dynamic difference of any hub-centre front end.”

Still, when he outbraked AMA champion Jimmy Adamo’s Ducati and Scott Zampach’s Harley to take the lead of the 25-mile Sprint race in his first race, it seemed too good to be true. In a way it was, because although he held on to score a debut victory, the race revealed a big problem: at high speed and seemingly at random, the Bimota would shake the bars violently in a high-tech imitation of a low-tech tank-slapper. Sometimes so bad he’d have to back off.

“Just because Bimota had designed a motorcycle to be completely multi-adjustable in every sense, it didn’t mean anything if you didn’t know how to unlock the handling benefits,” he continued. 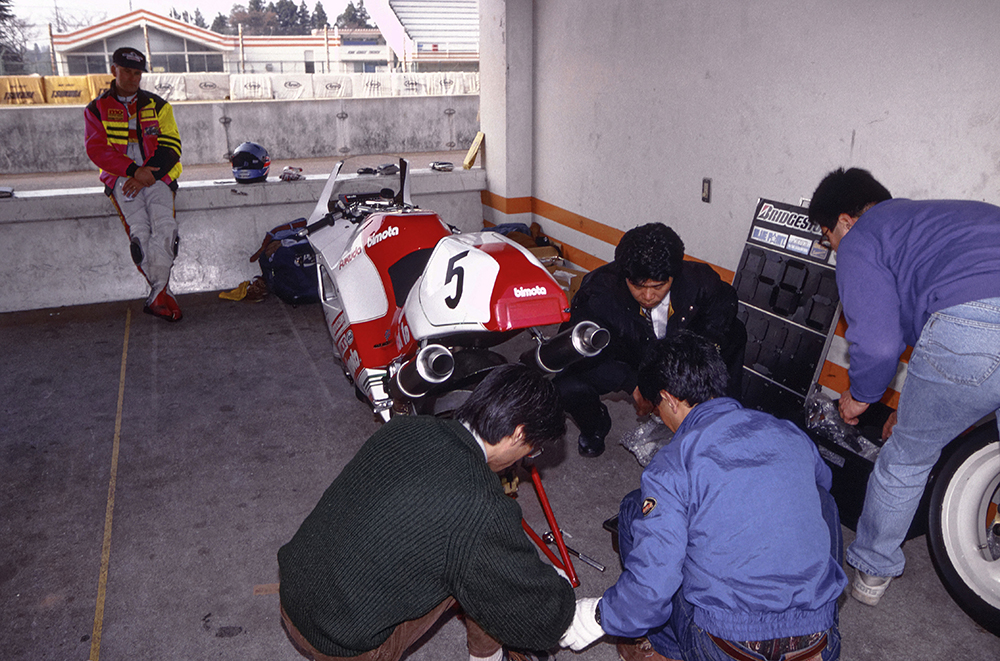 “The Art of the Set-up was eluding us – and the illustrious crowd of big-name hangers-on couldn’t decipher a cure.”

The season was interspersed with problems, and despite a couple of podiums in Belgium and France, Cathcart ended the year with a sense of a job half done. He and the factory agreed to another year, this time with a full works spec bike, Öhlins shocks and an improved suspension link.

He made a deal to race Tsukuba track outside Tokyo and recruited Japan’s leading Öhlins technician Tsuguatsu Mihara. A day-long session had the Tesi handling better than ever before.

Qualifying midfield out of 30 starters, Cathcart carved his way through to fourth in the 20-lap race.

Delighted, Mihara-san now had his teeth into the Tesi and wanted to see it through. Together with the pair’s mutual friend Kyoichi Nakamura, Mihara-san agreed to look after the bike at 1992 Daytona.

Armed with a new Bridgestone tyre contract after winning races in Japan, Cathcart had high hopes for his second Daytona attempt. But in just the first practice session, he was reunited with the dreaded Tesi tango.

“I couldn’t hold the throttle wide open, the ’bars were flapping hard in my hands!” he recalls.

Mihara-san wasn’t worried. “No problem,” he said. “We fix.” And after two hours measuring, adjusting, bouncing and altering, and a softer-construction rear Bridgestone, Cathcart returned to the track.

“For the first time I could use full throttle all round the banking, with no trace of the wobble. The Wayward Wonder had gone straight and my lap times dropped by three seconds!”

Winning the Sprint race for the second year running was embarrassingly easy. He took the lead at the end of lap one and won the 25-mile race by 27sec. The Art of the Set-Up as practised by Mihara-san meant it handled perfectly for everyone to see.

And a satisfying season it turned out to be – three wins and three third places out of 11 starts was a satisfying scoreboard for his second season – still with the odd hiccup or two, but then, that’s racing! 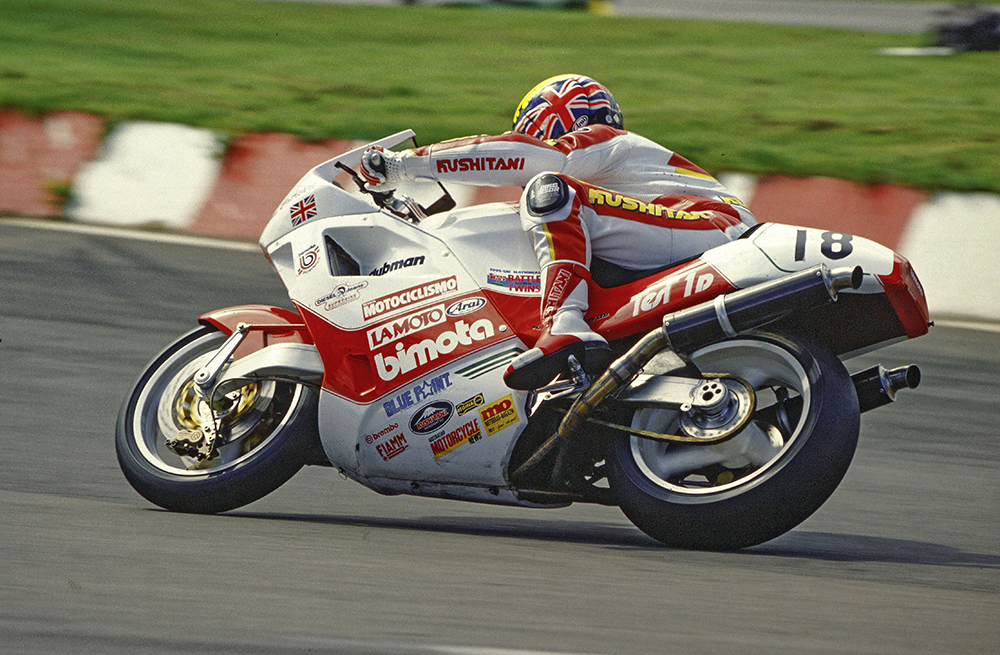