TREVOR DISCOMBE: THE LEGEND OF YAMAHA ASIA | LOOKING BACK

If it wasn’t for a wayward wheelie off the line, Kiwi Trevor Discombe could have been a household name. This is his story.

Younger readers may not know the name, but Trevor Discombe is one of Australasia’s most successful road racers.

He became almost unbeatable in the 350cc class anywhere he rode, winning grand prix’s in New Zealand, Indonesia, Malaysia and Singapore. He was pretty handy in the dirt too, and later became a legend on TZ750s, earning dozens of New Zealand and Asian titles between 1965 and 1983.

He achieved fame at the highest level and was offered a factory Yamaha South East Asia contract at the peak of his career, joining an elite club – Kenny Roberts was the Yamaha USA factory rider, and later Giacomo Agostini became the Yamaha Europe factory rider.

Born in 1943, by the age of 15 Trevor was racing grass track and enjoyed success for several years on a self-built 500cc JAP in a BSA frame. He made it into the 1963 North Island Motocross team, where he competed alongside familiar names such as Kim Newcombe and Alan Collison.

Reminded of this, Discombe says with a laugh: “And then I went to a couple of road race meetings and I thought this was the bee’s knees because you don’t get dirty road racing!”

Between 1965 and 1969, he won a number of titles on his AJS 7R, including the NZ Junior TT, some hillclimb titles, the Northland Grand Prix and the Junior Grand Prix at Ruapuna, which propelled the young Kiwi into the limelight. 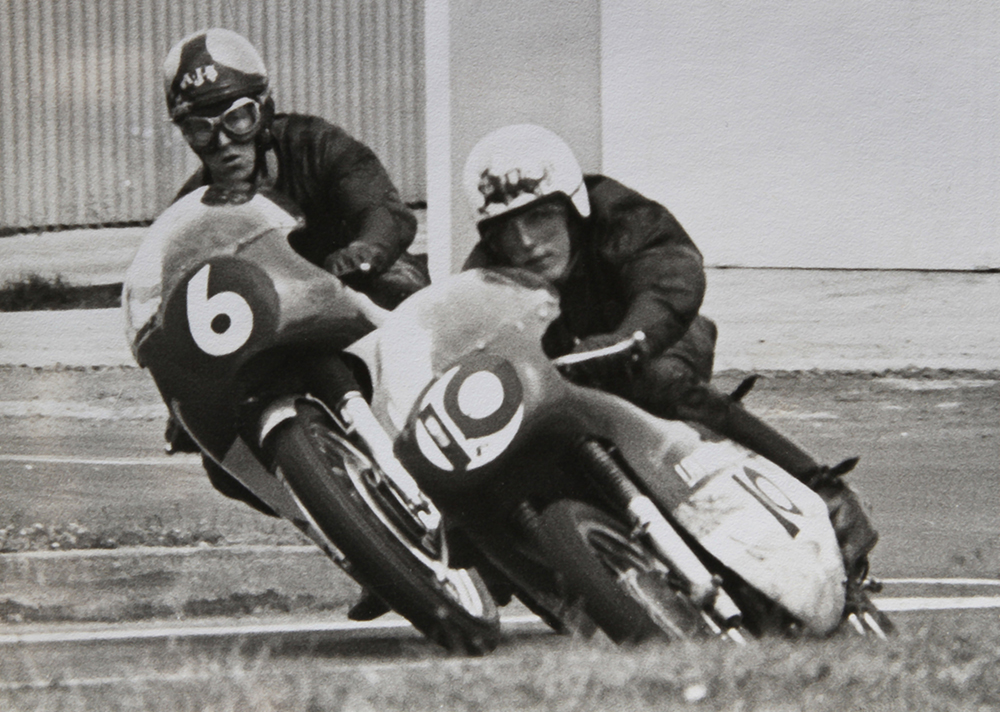 But the 1969 season closed with the purchase of the first of many Yamahas – a 350cc TR2 – and the floodgates opened in 1970, as the victories poured in. And it wasn’t just in the 350cc Junior category – he won many Open class races on his lightweight two-stroke.

Then he packed up his TR2 for the 1970 Malaysian Grand Prix in Jakarta, the Selangor GP at Batu Tiga and the Singapore GP at Penang. He sold everything, even his car, to make the start line. It was a huge gamble, but he finished third in Malaysia and Penang, both times behind two factory riders.

“I came back, and then it was Singapore, so I went to Air NZ, told them what I’d done, and would they give me a contract to fly me? They said: ‘Yes, we’ll fly you and two people and your machinery to wherever you want to go!’”

With 180,000 screaming fans, the Singapore event was huge, if ill-starred. Two people were electrocuted while climbing power poles for vantage points, and two more were shot by police while fighting beside the pits. In the race, Trevor Discombe crashed while holding second with
the finish line in sight.

Still, his stirring performances were enough to get noticed by Yamaha Japan. He became the Yamaha South East Asia factory rider until 1974, employed by Singapore Yamaha distributor The Motor Cycle Industry Ltd, and had up to three factory mechanics at his disposal. 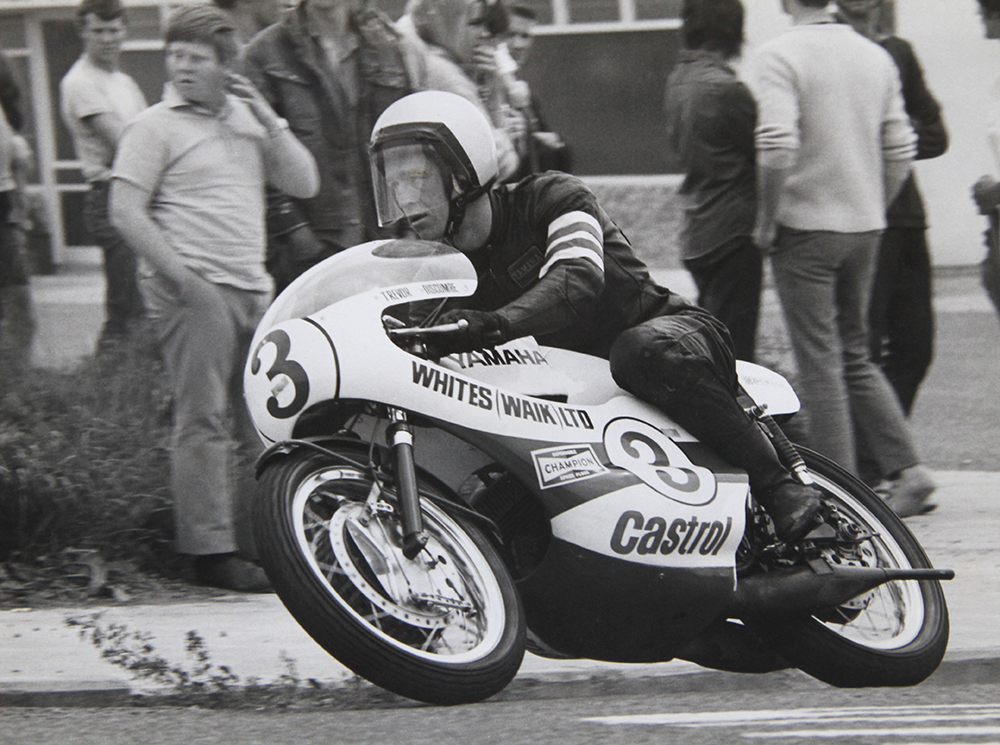 “I was over the moon!” Trevor says. “I rode better when I was away because I didn’t have todo anything. Whatever I wanted was there!”

The next few years became a blur of travel, inventions, a new bike shop and major victories.

The year 1971 began with a series of first and second places at circuits including Levin, Pukekohe (NZ Senior and Junior TTs), Bay Park, Teretonga and Gracefield. Next stop was the Singapore Grand Prix at Penang – on his new factory 350cc Yamaha TR2B – followed by the Selangor GP.

The 27-year-old took victory at Selangor, snatching a cool $5350 prize money ahead of Kiwis Keith Turner and 21-year-old Dale Wylie, both on faster works TR500s.

Next stop was Malaysia, where Trevor Discombe, Geoff Perry and Ginger Molloy had a battle royale for the Malaysian GP. Trevor won, adding the Indonesia GP at Jakarta a month later. 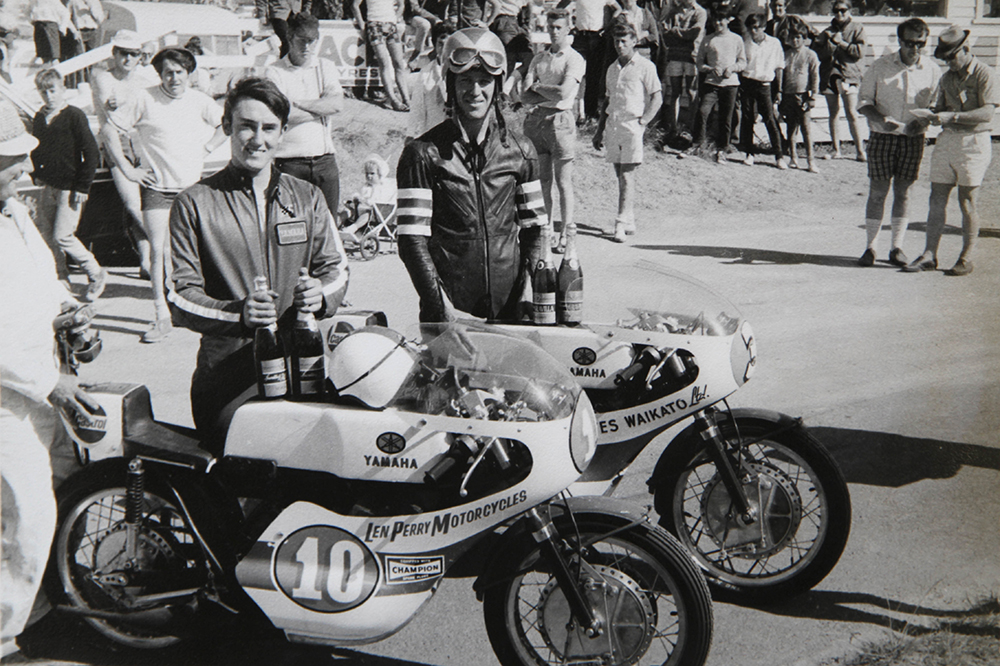 In 1972 the victories continued on the 43kW (58hp) TR2B, wins at Bay Park, Wigram, Teretonga, Ruapuna, Amaroo (against Molloy, Turner and Perry), Kuala Lumpur, Gracefield and Singapore all coming during the first quarter of the year.

The new water-cooled TZ350A arrived in early 1973 and Discombe immediately took it to second places in the NZ Junior TT at Gracefield and the Open Class Grand Prix. Riding the 250cc TD3, he won the NZ Lightweight TT.

Wearing the mantle Mr Consistent, wins followed on both Yamahas at Hamilton’s first Founders Theatre street circuit, where he cleaned up, repeating the performance a week later at the 50-lap Malaysian GP on the TZ350A. But while a win’s a win, prize money wasn’t all the same – Discombe picked up $55 for a Hamilton race win, but $2166 at Kuala Lumpur!

Just two days later he was at Pukekohe racing his TD3, then back in Singapore four days after that, to grab third in the grand prix at Penang.

With the factory TZ350A in New Zealand, he promptly secured another NZ Junior TT, then wrapped up the final round of the Marlboro Series with a 350 win and third in the feature race behind John Boote and Dale Wylie. The inaugural 1973/1974 Marlboro Series was won by Wylie, with Discombe second and Boote third. 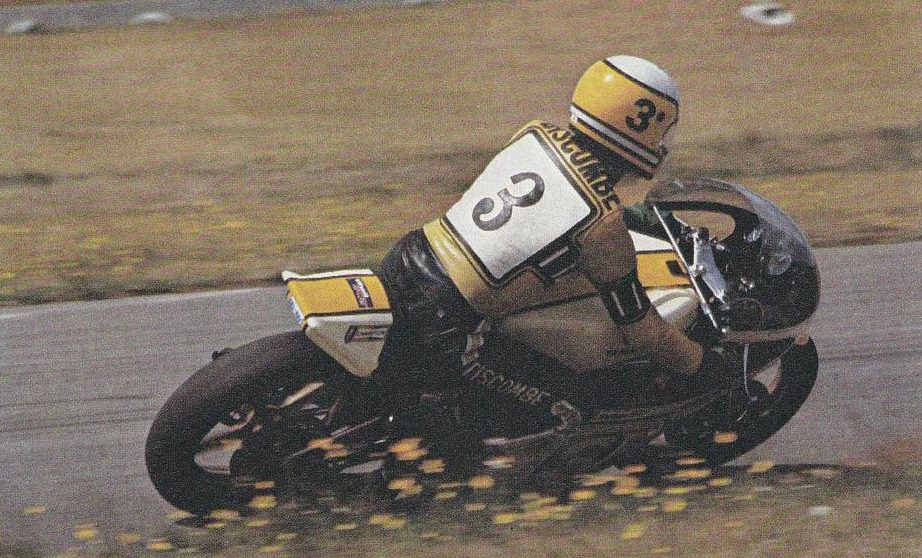 “I won a lot of races – I rode them pretty well I guess,” Trevor says. “I had the engines running well, but it wasn’t until I got the first TZ700 that I needed a hand at the meetings. Then Dennis Shaw helped me a lot, and Dennis is really good.”

A brand new Whites Yamaha TZ750A arrived in April ’74 and he put it to good use, smashing the Pukekohe lap record by 0.8 seconds. Busy with his new Discombe Motorcycles shop, Trevor paid just one visit to South East Asia in ’74, grabbing second at the Indonesian GP. His factory support had run its course. Despite little joy in the 1974/1975 Marlboro Series, a string of wins rolled in during 1975 and into ’76, including two key firsts at the Malaysian GP.

For 1977 Discombe took his latest Nico Bakker-framed TZ750C to wins at Pukekohe and Hamilton, and secured his fourth NZ Open Grand Prix at Easter. A series of top-eight placings during an increasingly competitive 1977/1978 Marlboro Series left him fifth overall.

More big-bore wins followed in 1978, at Pukekohe and Taupo, along with the final running of Hamilton’s Founders Theatre street circuit. Then he bought a new Yamaha TZ750E with funds from a Holden ute he was gifted by Alan Skousguard.

The Malaysian and Singapore GPs beckoned, but a severe case of mumps almost stopped him from competing. As it turned out, he should have stayed home as a huge crash in Singapore wrecked the bike and hospitalised the 35-year-old with a broken collarbone, fractured left finger, back and leg injuries – on top of the mumps.

Finally home, he commissioned Ken McIntosh to build a new frame, using it to smash the Bay Park outright lap record. His stunning 58.4-second lap was 1.4 seconds under the old record. 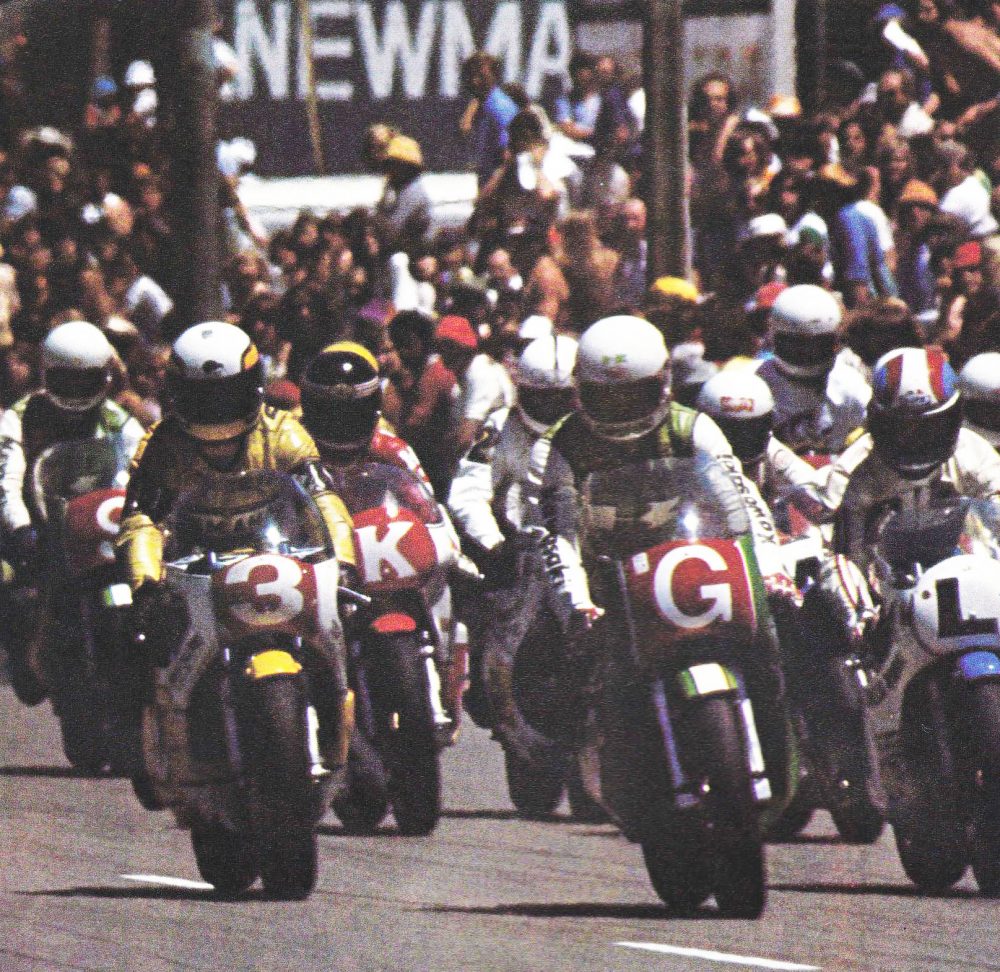 Over the next few years he enjoyed many tight battles with RG500-mounted opponents John Woodley, Rodger Freeth and Stu Avant. Discombe won the 1979 NZ Open Grand Prix at Ruapuna for the second year running as he wound down his racing efforts, and threw a few Castrol 6-Hour races into the mix.

But his illustrious career ended in unexpected fashion, at Bay Park in 1983. F1 champ Rodger Freeth wheelied his McIntosh GSX1100 off the line and landed on top of Discombe.

“In hindsight, I would have liked to have gone to Europe, but I never had the money, I wasn’t organised,” Trevor says. “I take my hat off to Ginger and Keith. Ginger is a smart racer, a hard man – we had some great races. Every year when he’d come back from Europe, he’d bring a racebike around and we’d load up and do the whole NZ circuit together.” 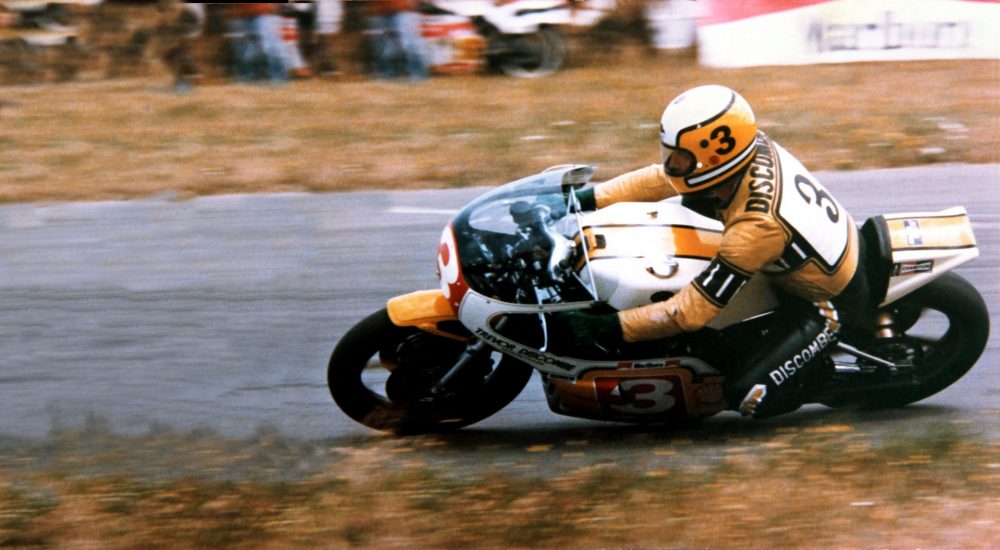