THE FIRST FORMULA 1 ISLE OF MAN TT | LOOKING BACK

Fifty years ago the Isle of Man TT was the world’s premier motorcycle race, then the 1972 event happened and everything changed. And it created the most famous TT race of all time

On the morning of Friday 9 June 1972, the Isle of Man was enveloped in thick fog and battered by heavy rain. The British round of the 125cc world championship was due to get underway at 11am. Should the race be postponed? Of course not, said the ACU jury.

Despite the horrendous conditions, the early race leader was TT rookie Gilberto Parlotti, who had travelled to the Isle of Man to protect his lead in the 125cc world title chase.

By half-distance – at Ramsey on lap two of three – Parlotti was still ahead of eventual winner Chas Mortimer. But it all went wrong when the 31-year-old Italian rode through the high-speed Verandah right-hander on the Mountain.

His factory Morbidelli two-stroke twin skidded sideways and flung its rider into a concrete fence post. The four-times GP winner was airlifted to Nobles Hospital but was dead on arrival. 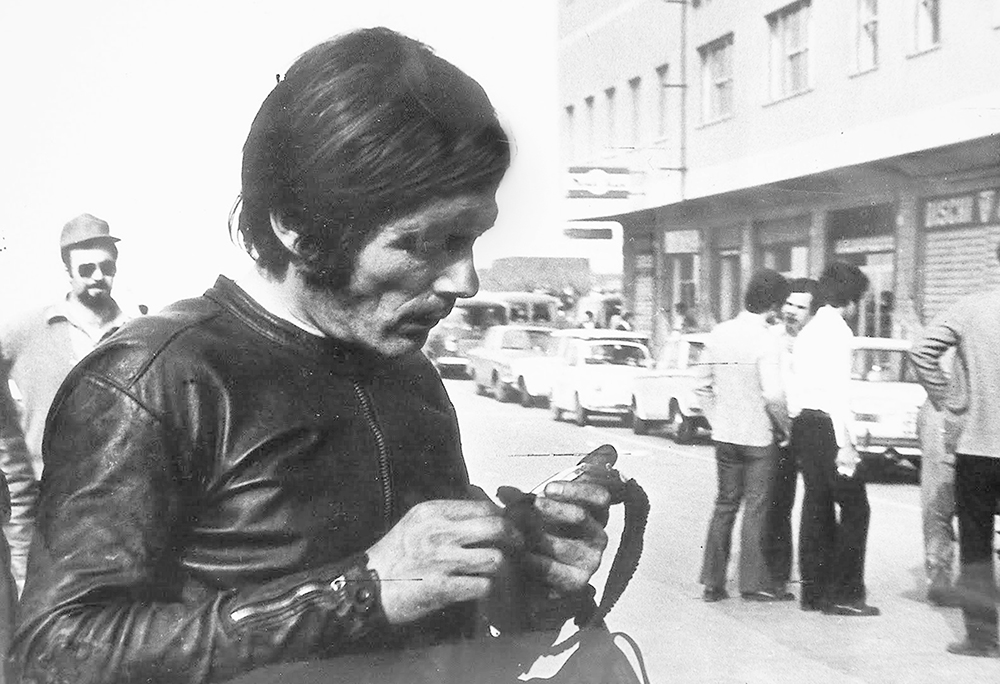 The inquest into the accident found that the Morbidelli’s screw-on fuel cap had come undone, covering the rear of the machine in petrol. The chief scrutineer believed this was the cause of the accident.

The effect of the TT’s 58th fatality was seismic, signalling the end of the TT as a round of the grand prix world championship. Parlotti was good friends with Giacomo Agostini, already a multiple TT winner and about to change his view of the event forever.

“The night before the 125 race Parlotti and I had dinner together and he said, ‘please, Ago, why don’t you take me for a lap in a car, just to help me remember all the track’,” recalls Agostini. “I was very tired but he needed my help, so we did one lap in the car. The next day my race was in the afternoon but I went to the paddock early to see the 125 race and everybody knows what happened…” 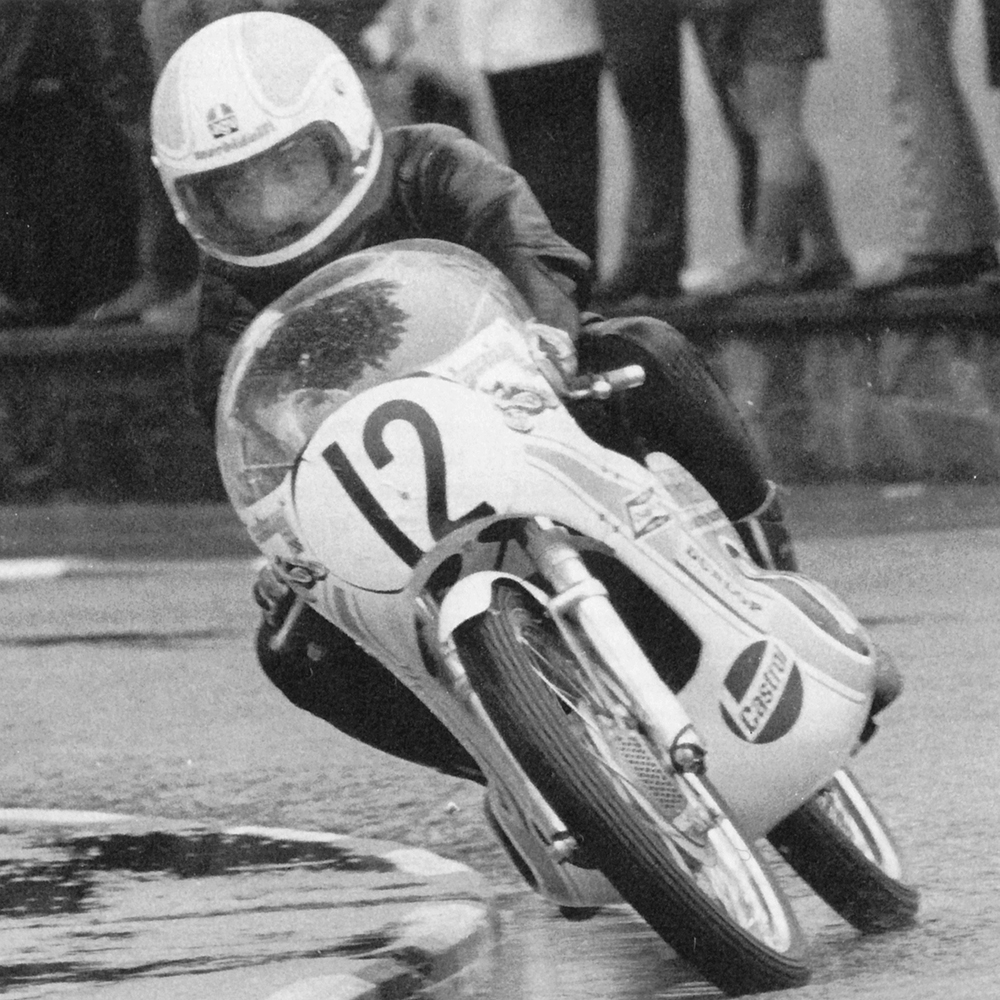 Ago never contested another TT and began lobbying the FIM to remove the event from the grand prix series.

“It was very, very difficult for me, because riding the Isle of Man is the best emotion ever and the atmosphere is fantastic, but if you think about safety, this is the problem,” said the Italian legend.

“Every year, two or three riders died. The first time you think it’s okay, the second year the same, because you are young and you don’t really think about it, then the third year and the fourth year you are older, so you think more.” 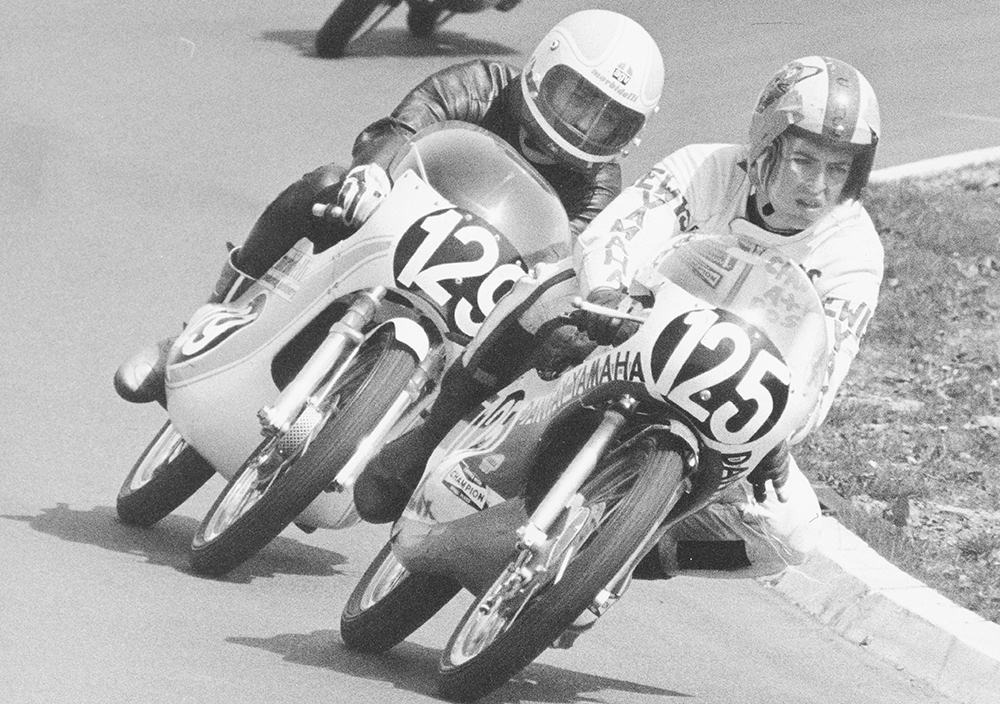 Sadly the fatality rate was sometimes much worse that two or three. During 1970 TT fortnight, no less than six riders lost their lives, including Spanish 250cc world title hopeful Santiago Herrero.

In fact some GP riders were already boycotting the TT, including reigning 125cc world champion Angel Nieto, who never returned after breaking a leg during his 1968 debut.

Reigning 250cc world champion Phil Read joined Ago’s boycott, although the Briton was as angry about lack of money as lack of safety. 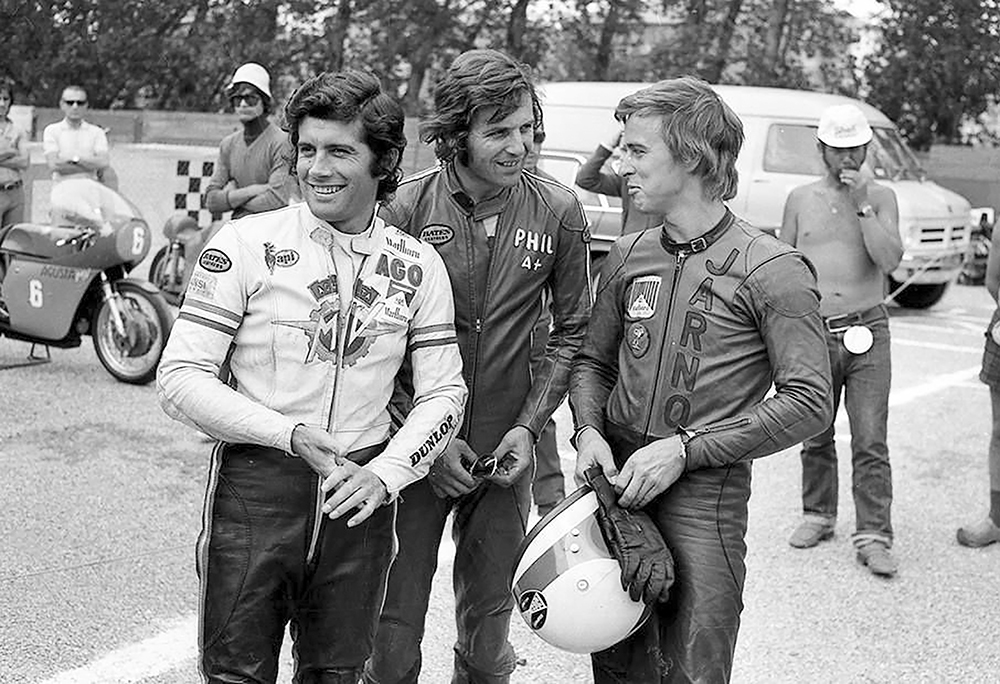 “The TT didn’t frighten me. I loved it over there, but Ago and I mutually agreed that it was too dangerous for a GP, so we wouldn’t go again.”

The FIM was already moving in the same direction, announcing later that summer that GP venues wouldn’t be able to retain championship status purely through tradition.

Two years later reigning 125cc world champion Kent Andersson asked the FIM to move the 125 world championship round from the Isle of Man to Anderstorp in Sweden. The FIM agreed. 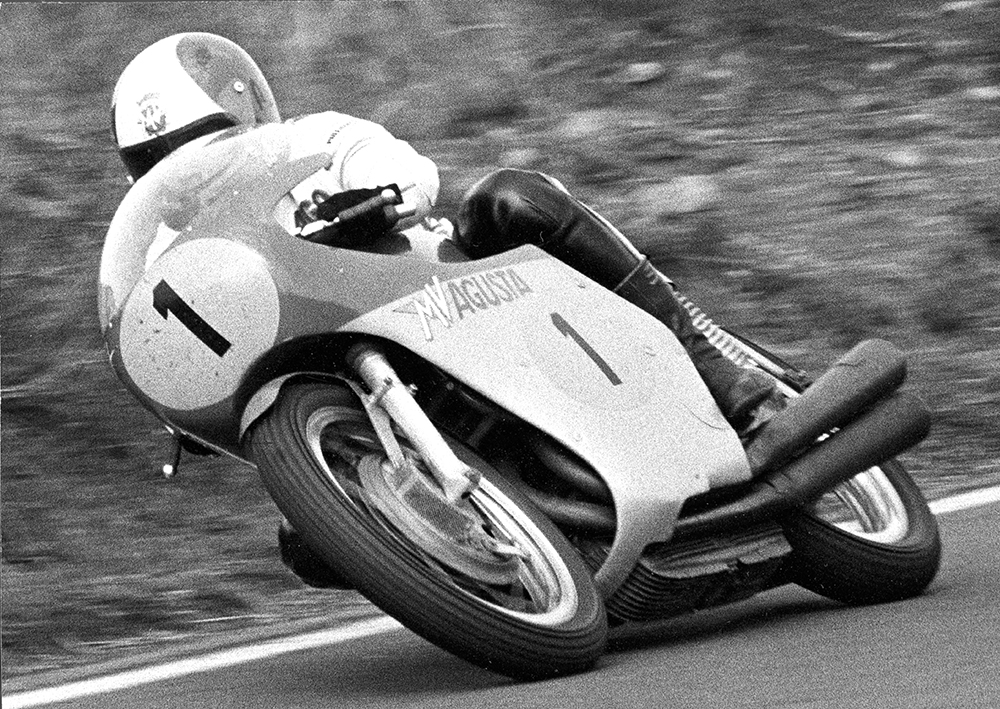 The TT was no longer sacrosanct. The event’s expulsion from grand prix racing began in earnest during the 1975 FIM congress, held in West Berlin.

New regulations were drawn up for GP venues: circuits must be between 2.5 miles and six miles (4km and 10km) long, run-off areas were to be introduced, the edge of racetracks must be marked with anti-slip paint and so on. In other words, GP racing was moving into the modern world and the TT wouldn’t be going with it.

Although many TT stalwarts were horrified, some understood the need for change, including Neil Tuxworth, who contested the TT from 1971 to 1989.

“As much as I loved the TT I thought it had run its course as far as GPs went,” says Tuxworth, who later became Honda UK’s race boss.

“GPs were progressing, so I thought the TT shouldn’t really be a GP.” 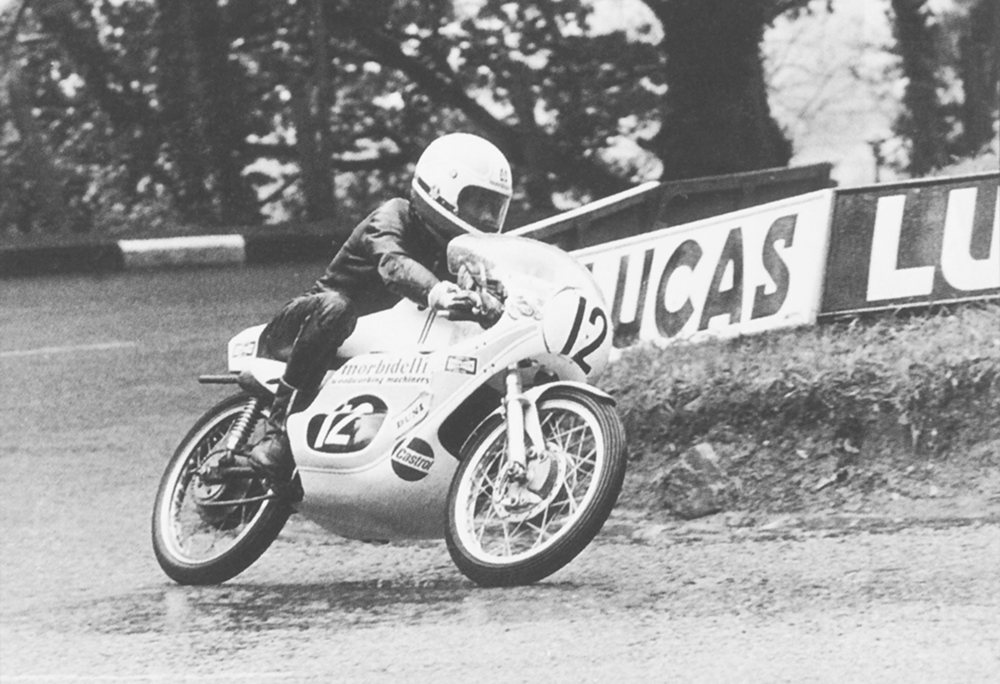 However, the TT’s unique standing – the event had been the pinnacle of motorcycle racing for almost three-quarters of a century – saved it from total annihilation.

During the FIM’s first get-togethers of 1976, held in Torremolinos, Spain, and Geneva, Switzerland, delegates took extraordinary steps to keep the TT relevant as a world-class event.

“We take into account the TT’s importance, the tradition attached to the event and the services which the TT races have rendered to the development of motorcycle racing,” said the FIM in a statement.

“The central board considers that purely and simply removing the event from the classic event calendar, even though this decision would be legal, would be detrimental to the TT itself and to motorcycle racing in general.

“As a consequence, after long deliberations, the central board has decided to create a new world championship based on the TT and to which other events with the same characteristics can be added in the future. This decision will come into force in 1977.” 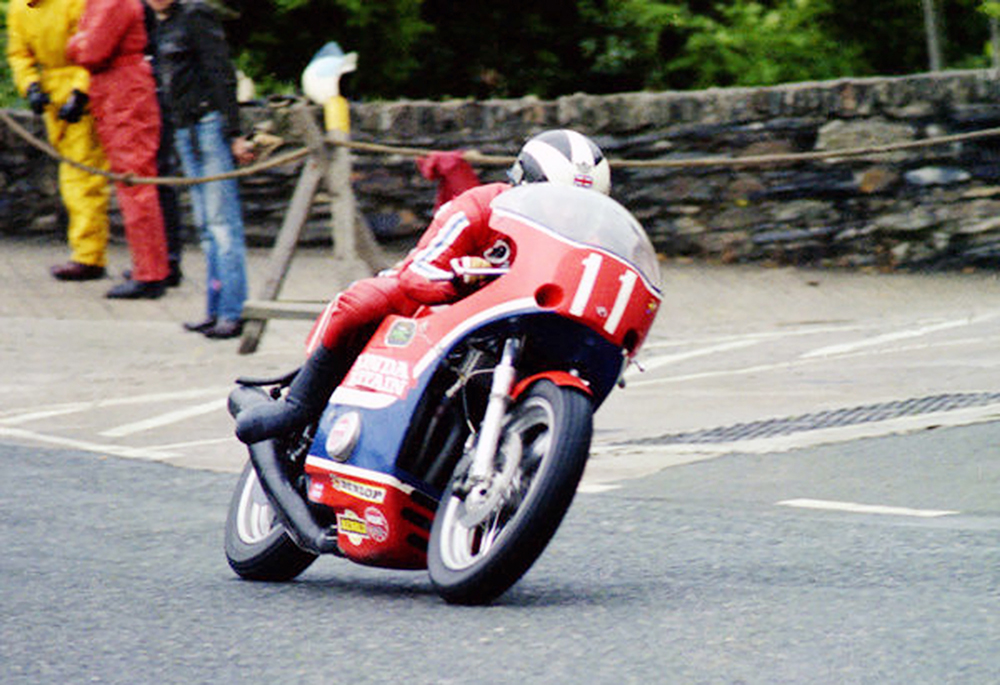 The TT duly staged its last grand prix in June 1976 and its first Tourist Trophy Formula races in June 1977. This was an historic moment, because the TT Formula classes – F1, F2 and F3 – created for the Isle of Man TT were the first world championship events specifically designed for road-based machines, pre-dating world Superbike by more than a decade.

Therefore the bikes that Peter Hickman and his rivals raced at this year’s TT are born out of what happened in the mid-1970s. The first Tourist Trophy Formula world championship technical regulations were drawn up by the ACU in July 1976 and agreed by the FIM a few months later. 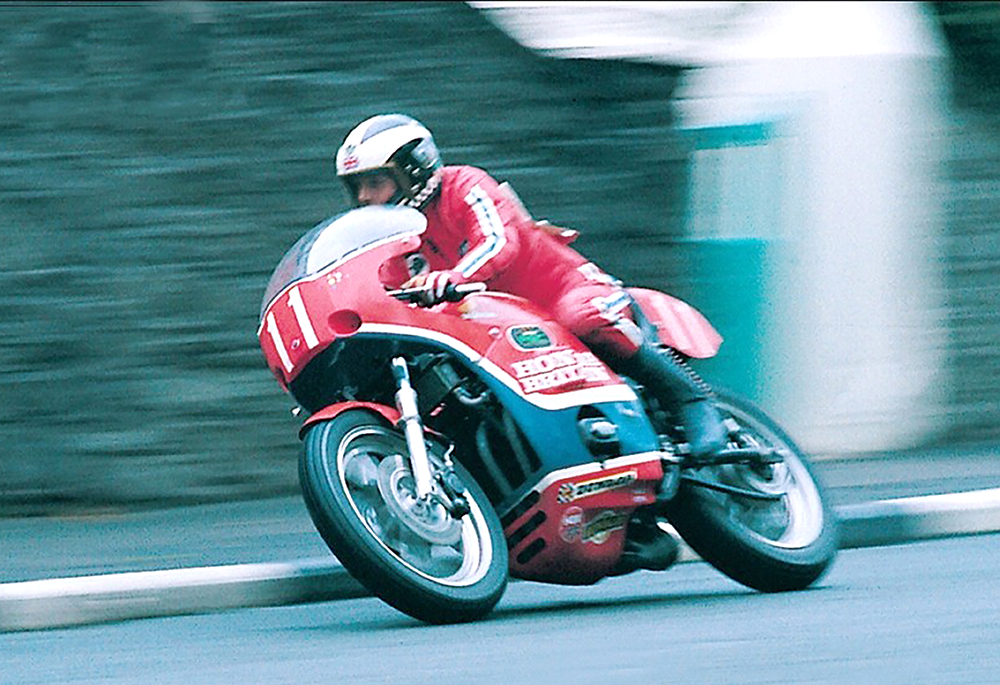 “I thought the Formula thing was a great idea,” said Tuxworth. “In those days nearly all races were full of Yamaha TZ250s, 350s or 750s, so TT Formula was good for the spectators because it gave them something different and a real variety of machinery. It created lots of interest, in Europe and Japan as well.”

The first F1 TT in June 1977 coincided with the return of Read, who had recently retired from GP racing. The 36-year-old came back because the TT promoters were finally paying generous appearance money, because they could no longer rely on the stars showing up to score GP points. 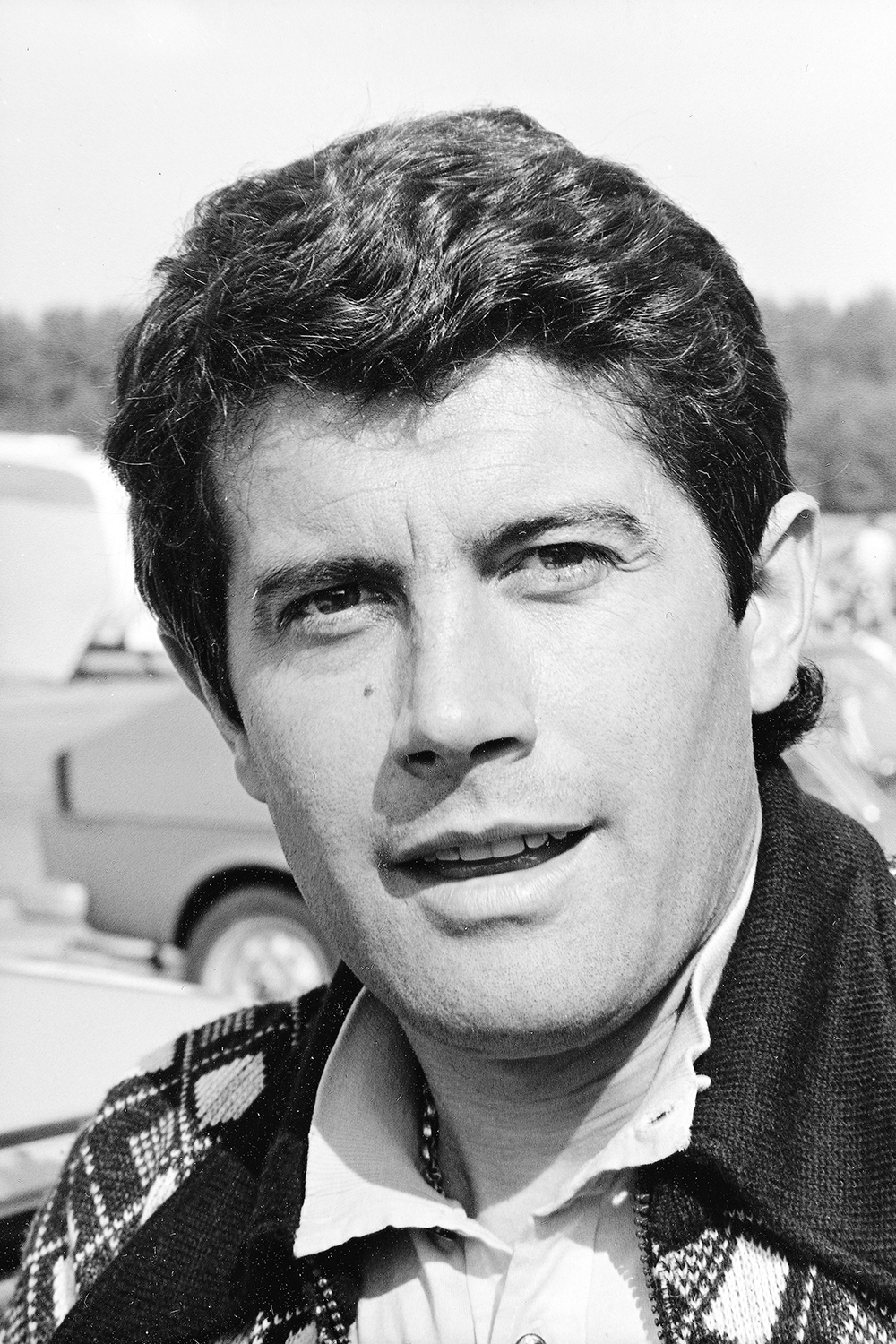 Read’s two machines were a Suzuki RG500 GP bike for the Senior and a factory Honda for the inaugural F1 race. The TT still meant a lot to Honda, so it sent over Michihiko Aika – the race engineer that had masterminded Honda’s stunning 1960s GP successes – to fettle Read’s bike, a modified RCB endurance racer, powered by an 820cc CB750 engine.

Read scored an easy victory in the rain-lashed F1 race. Honda was the first team to find out that the race was to be shortened due to the weather, so it saved time by cancelling his pit stop.

“The race was horrible,” Read adds.

“It pissed down and got wetter and wetter. I was wearing red Honda leathers and my body was red for a week after.” 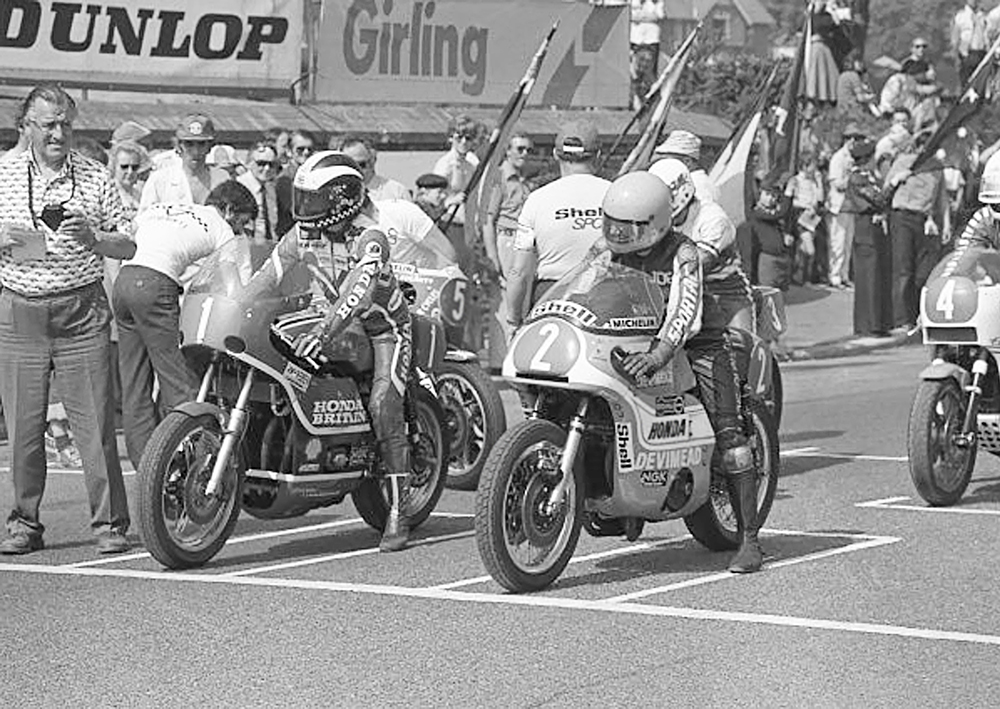 Phil Read (Honda, 1) and Joey Dunlop (Devimead Honda, 2) wait for the starters flag to drop to start the 1978 Formula One TT. Neither were to see the chequered flag.

That night at the prize-giving ceremony, the winner of the first-ever TT F1 race got a nasty shock – he was booed by the fans for his harsh words following Parlotti’s death.

“The reception at the prizegiving wasn’t very good, but when I won the Senior a few days later they were a bit more enthusiastic,” he remembers.

“The bad reaction did bother me. The fans had accused me of getting the TT withdrawn from the GP championships. Okay, perhaps I was a bit verbal, but although Ago and many others agreed with me, I was always the headline news.”

The following year another TT veteran returned to the Island, setting up a classic F1 duel that established the new class as one of the TT’s main events. 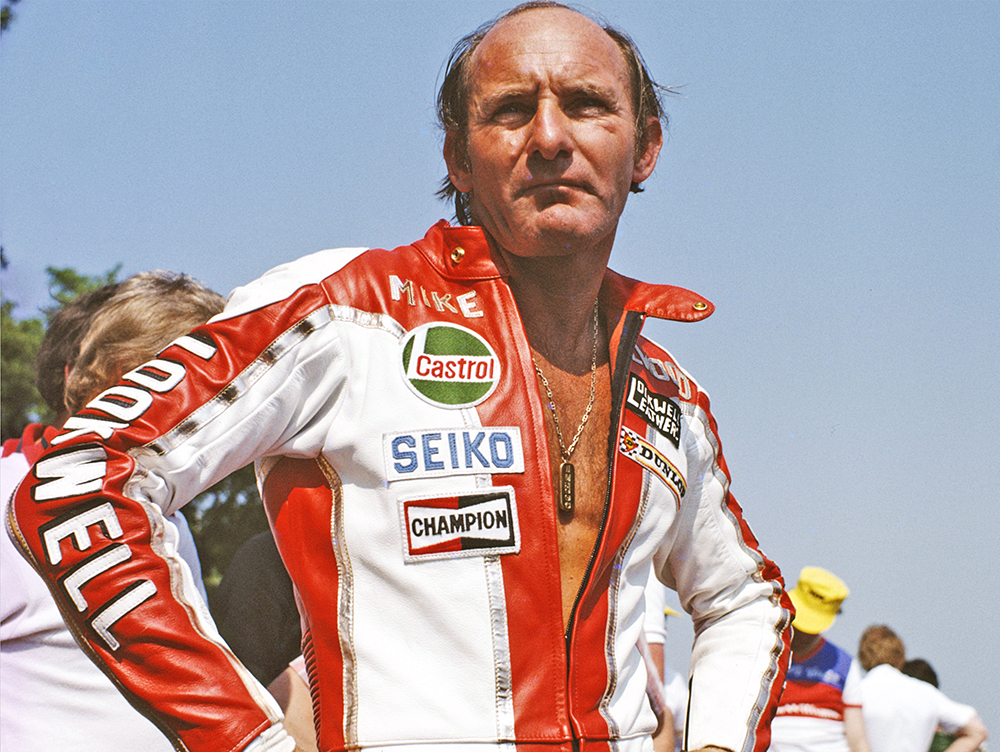 Sixties superstar Mike Hailwood rode his last TT in 1967, before Honda’s and his withdrawal from GP racing. However, the 38-year-old had grown bored in retirement and wanted another crack.

“I realised that I would be quickly down the tubes if I tried to go GP racing,” he wrote later. “But I felt the Island would continue to be kind to me and that I would have a wobble round without disgracing myself.”

Hailwood’s epic 1978 F1 duel with Read is the TT’s biggest race of all time. It caught the public’s imagination for all kinds of reasons, but mostly because Hailwood was still worshipped by fans, so it was the good guy versus Read the bad guy. 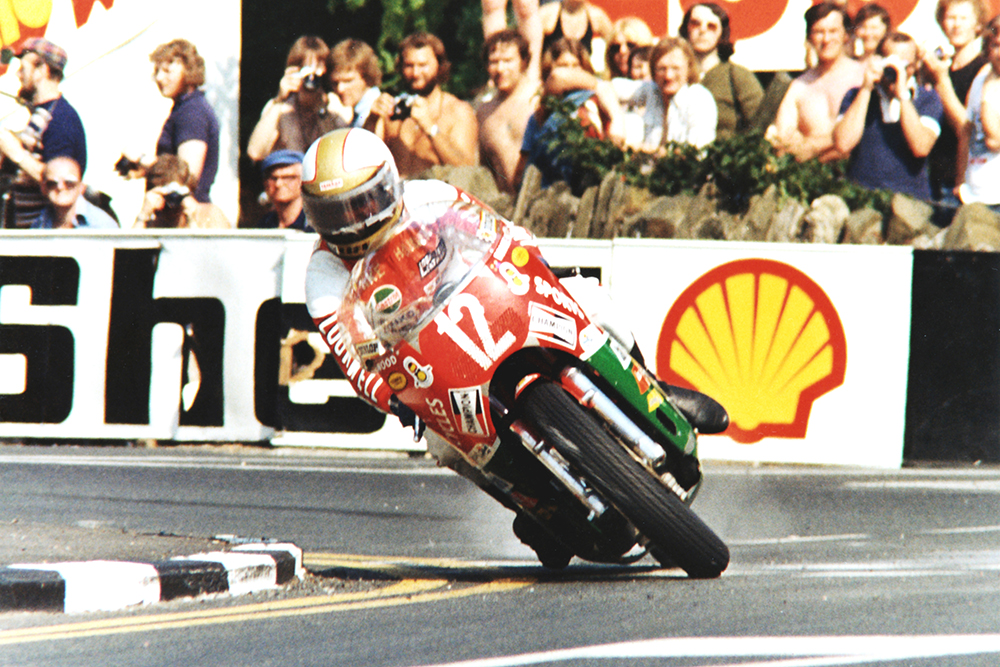 “In the last practice session I thought I’d done a good lap and then Mike came in, having lapped a mile an hour quicker,” says Read.

Read started the race first, as reigning F1 champion, followed shortly after by Hailwood: hunted and hunter. By the time the old rivals reached Ramsey for the second of six visits, they were together and they mostly stayed that way until the Honda expired.

“That race with Mike was one of the most exciting times I had on the Isle of Man,” Read recalls. “I heard him coming into Ramsey and I thought, ‘oh no, I recognise the sound of that Ducati’. Then I thought, ‘well, I’ve got to stay with him and make it more interesting’. 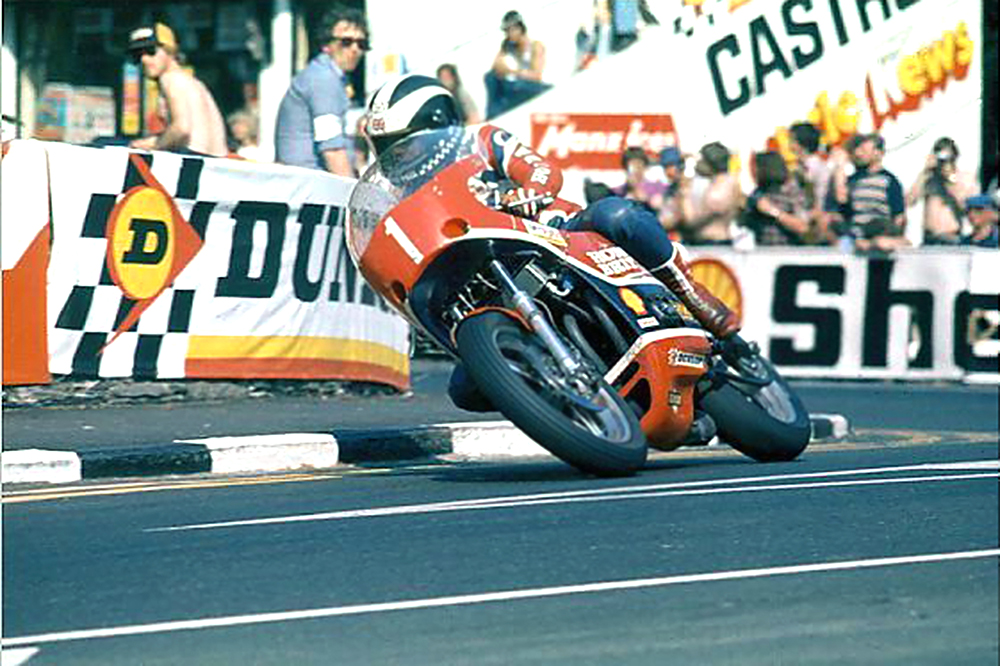 “He had more top-end, I had better acceleration. Mike was always a fair rider, there were no dirty tricks. We passed and repassed, waving at each other as he went by or I went by, usually with a V-sign.

“Obviously the crowds were getting pretty excited. I learned a lot riding behind Mike – how fast he went through certain corners and I was riding nine-tenths to stay with him and pass him.

“We pitted together and went out together and on the last lap I was tucked in behind him on Cronk y Voddy straight when my oil cooler blew and covered me in boiling oil. I thought, ‘oh shit’, flung the bike into the bank and listened to the radio as Mike arrived at Ramsey, the Bungalow, Signpost and then crossed the line. I realised that if his bike had broken instead, I would’ve been the most unpopular TT winner ever. 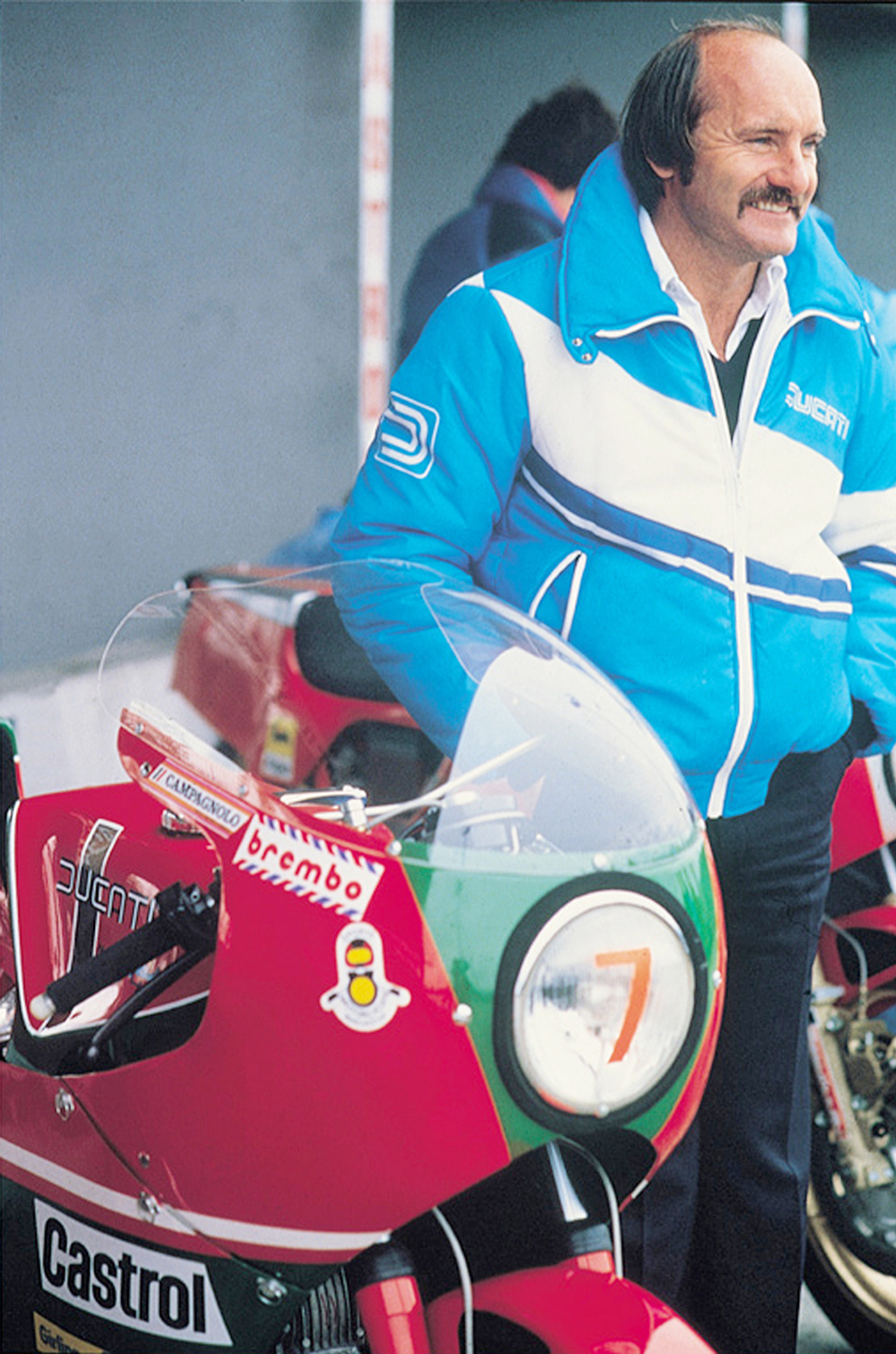 “When I eventually got back to the Douglas Bay Hotel, where Mike and I were staying, I went to his room and said, ‘well done Mike, congratulations!’ I was still in my oily leathers. He said come down to the bar and we shared a couple of bottles of champagne with friends.”

The TT was no longer a part of motorcycling’s world championships, but the 1978 F1 race proved that the event could survive and even flourish.

Other road circuits like Dundrod in Northern Ireland, Vila Real in Portugal, Montjuic in Spain and Brno in Czechoslovakia joined the Tourist Trophy Formula series, which was further enlarged by short circuit rounds at Assen, Donington Park and Sugo.

The last TT Formula series took place in 1990. By then its place as motorcycling’s road-based world championship had been taken by the new World Superbike series. 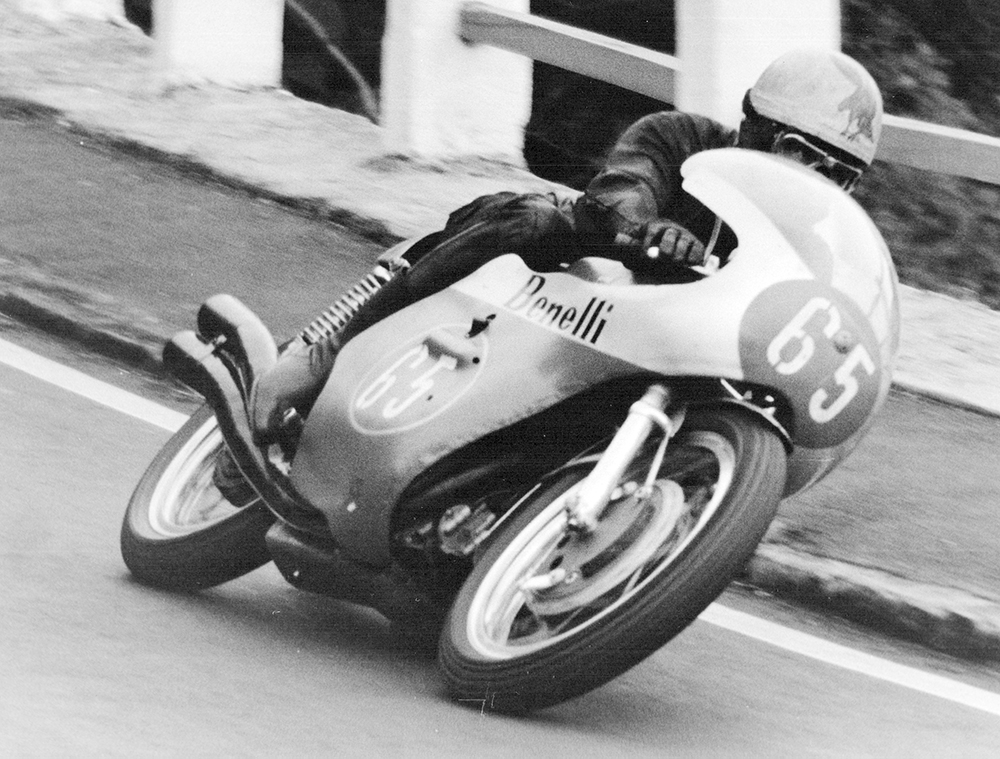