THE FIRST AND THE LAST | LOOKING BACK | Sport

It’s 45 years since Giacomo Agostini won the 1975 500cc world championship with Yamaha. It was the first premier-class title for a two-stroke and it was Ago’s last

Giacomo Agostini knew the writing was on the wall. When Yamaha’s first 500cc racebike arrived in Europe in April 1973, MV Agusta’s superstar was prepared to do anything and everything to beat Jarno Saarinen and his blisteringly fast OW19 at the Circuit Paul Ricard season-opener.

Trouble was, anything and everything wasn’t enough. Halfway through the race, Ago pushed too hard trying to keep up with the speedy stinkwheel and crashed, leaving Saarinen to ring-a-ding-ding his way to a historic victory. But the inevitable ascendancy of the two-stroke wasn’t the only reason Ago made the move that stunned the racing world. Since the death of Count Domenico Agusta in 1971, MV had been run by the Count’s dodgy nephew, Riccardo ‘Rocky’ Agusta. The two Italians didn’t get on. Even worse, Rocky and Ago’s teammate Phil Read were best mates.

“Rocky liked to be the big boss – ‘I’m Count Agusta, I’m the team owner’ – I think he was jealous of me,” Ago says. “Phil wanted to be friends with Agusta, so he always told them the bikes were fantastic, even when they weren’t.”

The Read/Ago relationship was so toxic that some joker at Yamaha’s Amsterdam HQ applied a Read sticker to the inside of the workshop toilet bowl. 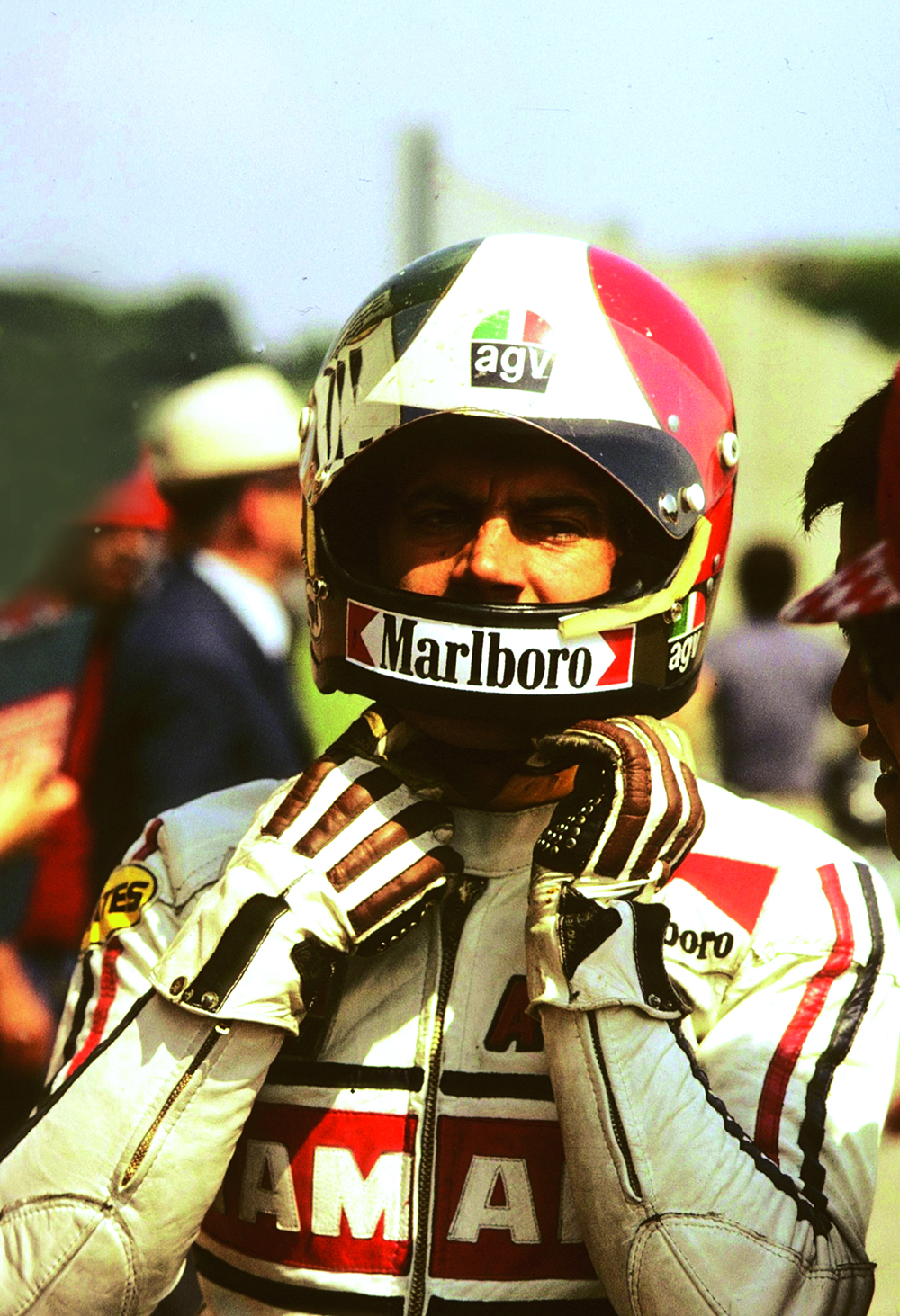 “Poor old Phil, he got shat on, on a regular basis, that’s how bad the animosity was,” recalls Ago’s mechanic Mac Mackay.

“To say the tension was high is certainly an understatement. The mind games were really heavy, a bit scary at times. I had to show solidarity by not talking to Phil.”

Yamaha’s European racing boss – 1970 250cc world champ Rodney Gould – had been chasing Agostini’s signature since 1971, trying to lure him away from MV, where he had won every 500cc grand prix title since 1966.

Gould suspected Agostini was looking for a way out: “Primarily he knew it was over for the four-strokes,” Gould recalls.

“But he also didn’t like Rocky, who was just a playboy. Rocky didn’t know anything about anything. All he was good at was spending money.”

At first, Ago resisted Gould’s advance. 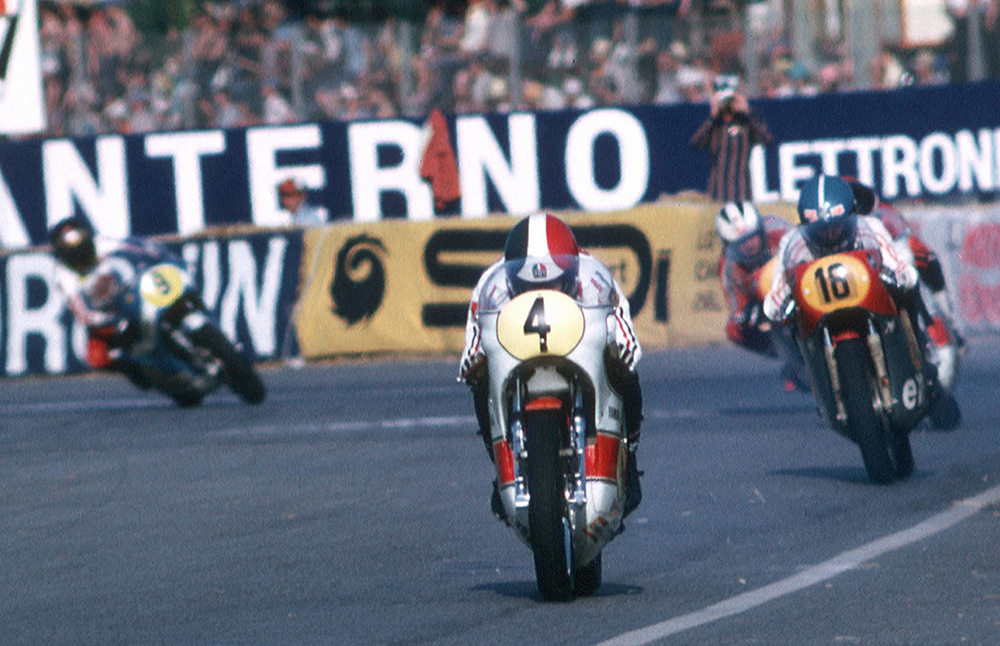 “In 1971, I thought it was too early to race a two-stroke – they were always seizing engines,” the eight-time 500cc World Champion explains.

“But by 1973, I could see that all the two-strokes were getting faster and safer, while it was very difficult to find more horsepower with the four-stroke, so it was time to change.”

Ago’s defection – to replace Saarinen, killed at Monza in May 1973 – was announced in December, some months after Mackay had received a phone call from Gould.

“I couldn’t believe it when Rod told me Ago was leaving MV,” Mackay says.

“And it was the way he said it, like something out of a John le Carré novel.” 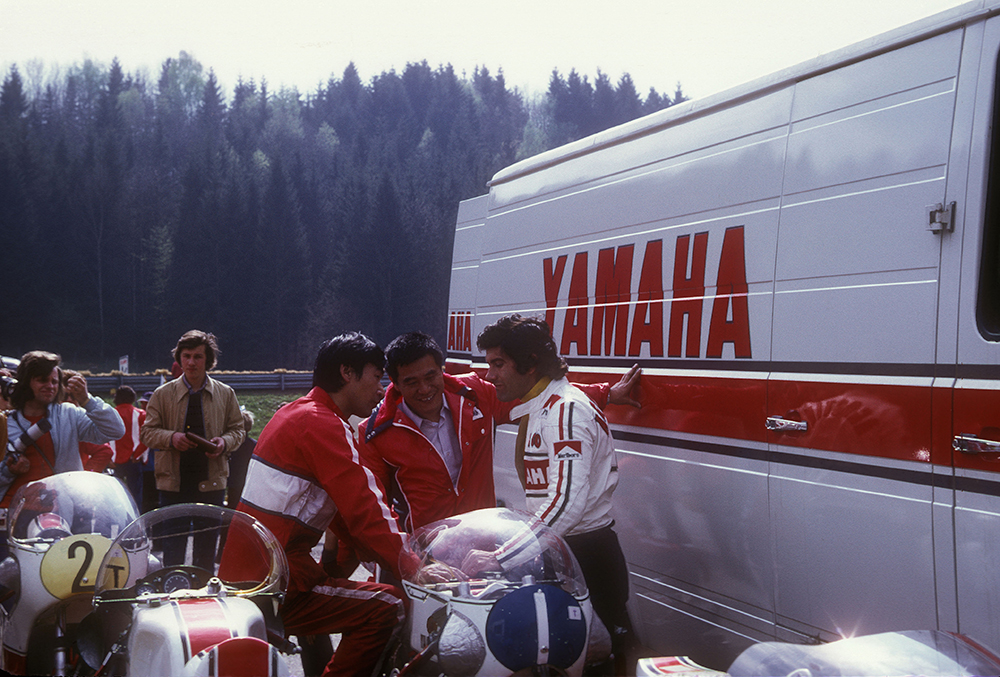 Immediately after inking his contract with Gould, Ago flew to Japan. At Yamaha’s Fukuroi test track he had a sneaky go on the OW20, even though he still had a contract with MV.

“He had an hour on the bike and told the engineers he thought the steering head angle was too steep – the bike was shaking its head a bit,” Gould recalls.

In spite of good omens, Agostini’s decision to go two-stroke turned out to be a little hasty. During 1974 he was plagued by engine seizures, and not only his own. He might well have won the title in his first year with Yamaha if Barry Sheene’s Suzuki RG hadn’t seized and taken him out at Anderstorp, sidelining him for the rest of the season. 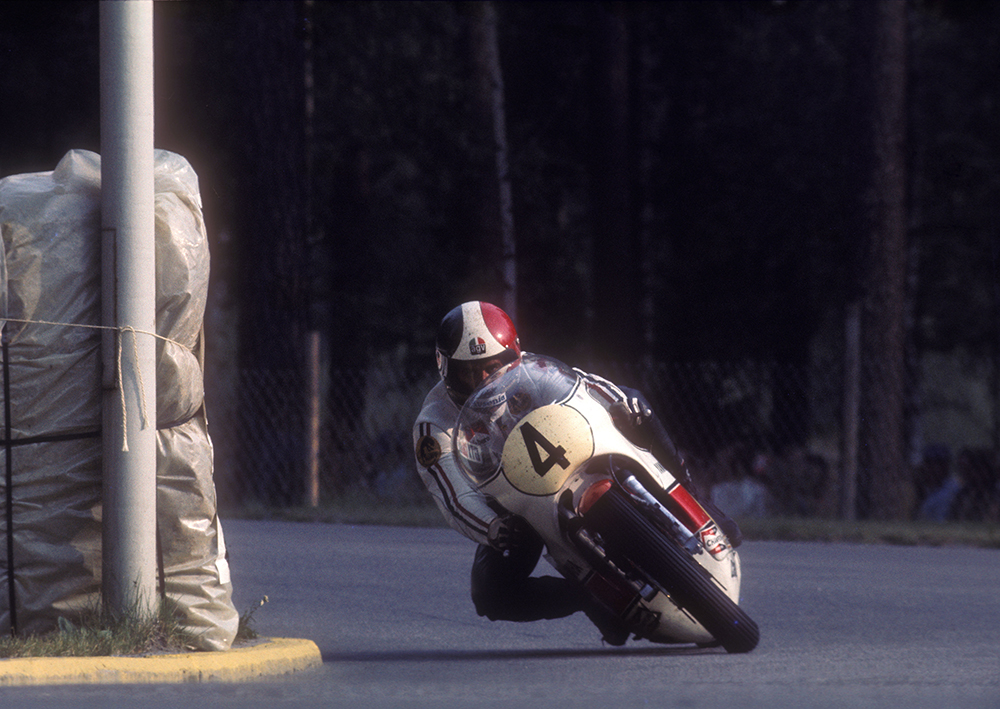 Saarinen had lost his life in similar circumstances, when Renzo Pasolini’s two-stroke Harley seized ahead of him at the Monza racetrack.

“The Yamahas weren’t ready when we got them at the start of 1974,” adds Mackay, who worked mostly on Agostini’s 350cc twin-cylinder bikes.

“When we got to the Salzburgring I had to weld up about 30 cranks because the flywheels were moving on the crankpins. The 500 was bad, but nowhere near as bad as the 350 which vibrated so bad it’d wear holes in your hands. There wasn’t a single race in 1974 when I didn’t have to weld up the 350’s chassis.

“But the bikes kept getting better. They used to test with Ago every week – test, test, test – and amazingly the flow of new parts never stopped.”

Mackay and his mechanics did everything they could to avoid seizures: “We used to sand all the pistons, crosshatching them with sandpaper, so they’d be smooth but not too smooth, they needed to carry the oil,” Mackay says.

Engine seizures and wonky cranks weren’t the OW20’s only problems. While Europe struggled in the wake of the 1973 oil crisis, the OW drank fuel at a ruinous rate: consuming 22L/100km. 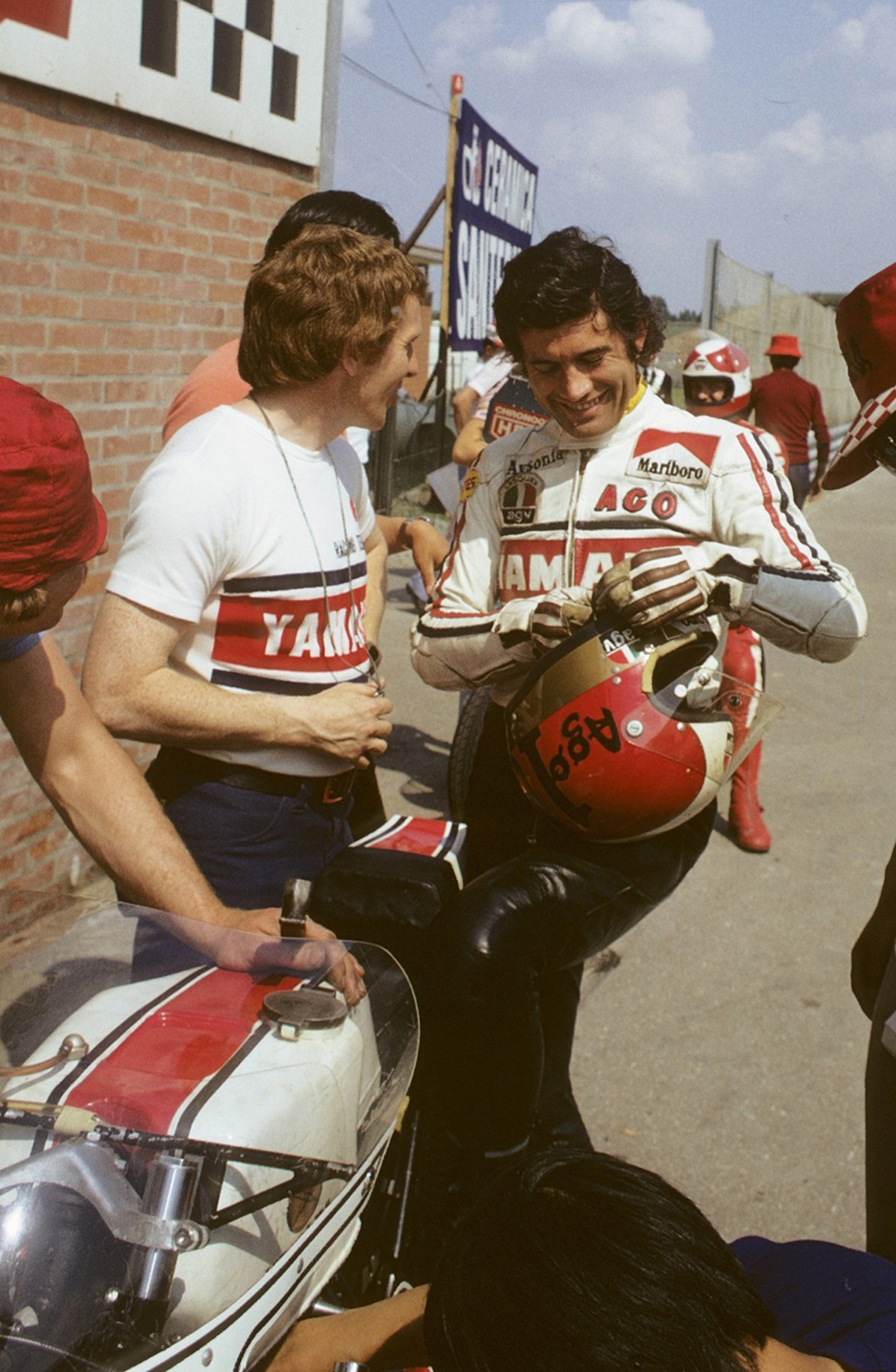 “The combustion chambers always showed the engine was running miles too rich,” says Nobby Clark, who fettled Ago’s 500cc racebikes. “They were running it rich to be safe, but they didn’t have to run it that rich. Eventually I said if we’ve got to run these big jets, let’s try softer plugs, which helped the performance so much it was unreal – but it didn’t help the fuel consumption.”

The in-line-four engine was so thirsty that Ago ran out of fuel at Imola in 1974 and the only way Yamaha could make race distance at Spa was by fixing an eight-litre tank in the seat to supplement the 35-litre main tank, which made the bike ridiculously heavy.

By 1975 Yamaha had got on top of most of the problems. The OW26 was 20kg lighter, drank less fuel and had a monoshock rear-end. Another huge improvement was Yamaha’s first cassette-type gearbox. The OW had a narrow powerband – about 2000rpm, despite reed-valve induction – so there was plenty of juggling alternative gearbox ratios. And each change of ratios required a full, five-hour engine strip.

“You’ve no idea how many all-nighters we did at races,” recalls Mackay. “Friday nights we’d invariably work all night and then on Saturday until two or three in the morning. A couple of the mechanics got pleurisy (a lung condition), just through overwork. It was murderous.”

In the end, Yamaha had to limit the number of ratio changes: “There were times when we made two changes in a day,” adds Clark. “At Assen, Masayasu Mizoguchi (Yamaha’s race boss) told Ago: ‘This is the last time we change the gearbox because tomorrow there won’t be time, so you better go away and think about it, come back and let us know’. 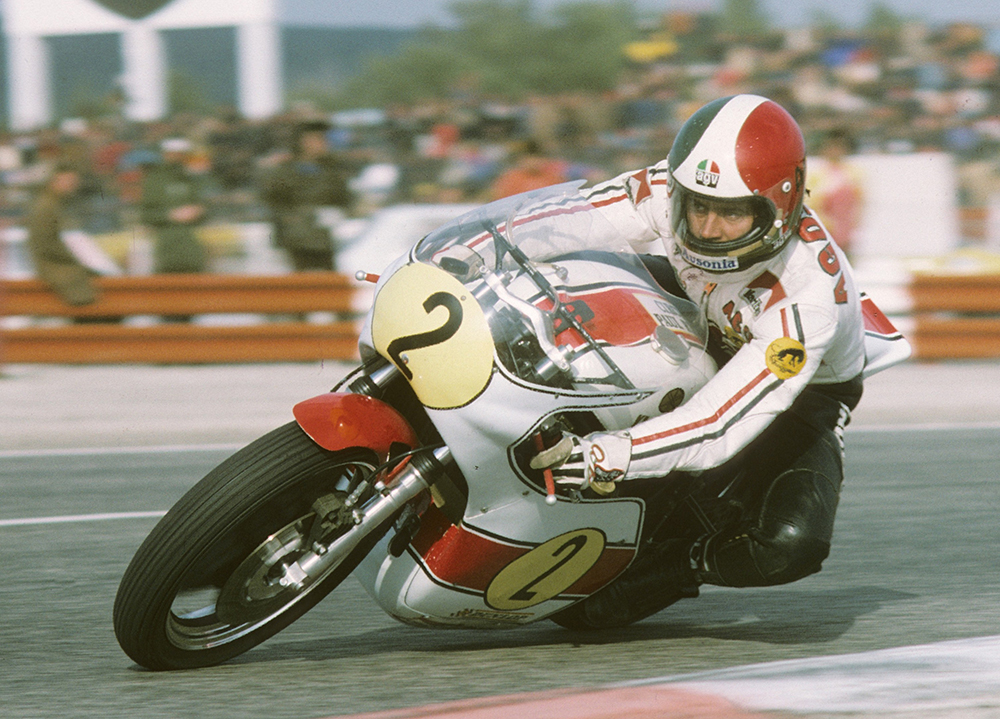 “Ago came back and said: ‘This is what I want’, and it turned out he was right.”

Strengthened by the knowledge gained during their first full 500 season, Yamaha made a perfect start to 1975: Agostini and teammate Hideo Kanaya taking a one-two at Paul Ricard, well ahead of Read.

But then things went awry. The engine seizures returned, stopping Ago at the Salzburgring and at Spa.

“Both times it seized a piston and we never knew why,” Mackay says.

With three of the 10 rounds remaining, Ago led Read by just three points. Then another disaster at Anderstorp, where Ago was sidelined by a flat tyre. With two races to go, Read was ahead on points for the first time. Riding like a man possessed, the Brit led the penultimate race at Imatra, only to DNF with a broken magneto.

A month later at Brno he won the season finale and ended the year with 12 more points than Ago. However, each rider’s best-six results counted, which gave Ago the crown by eight points. 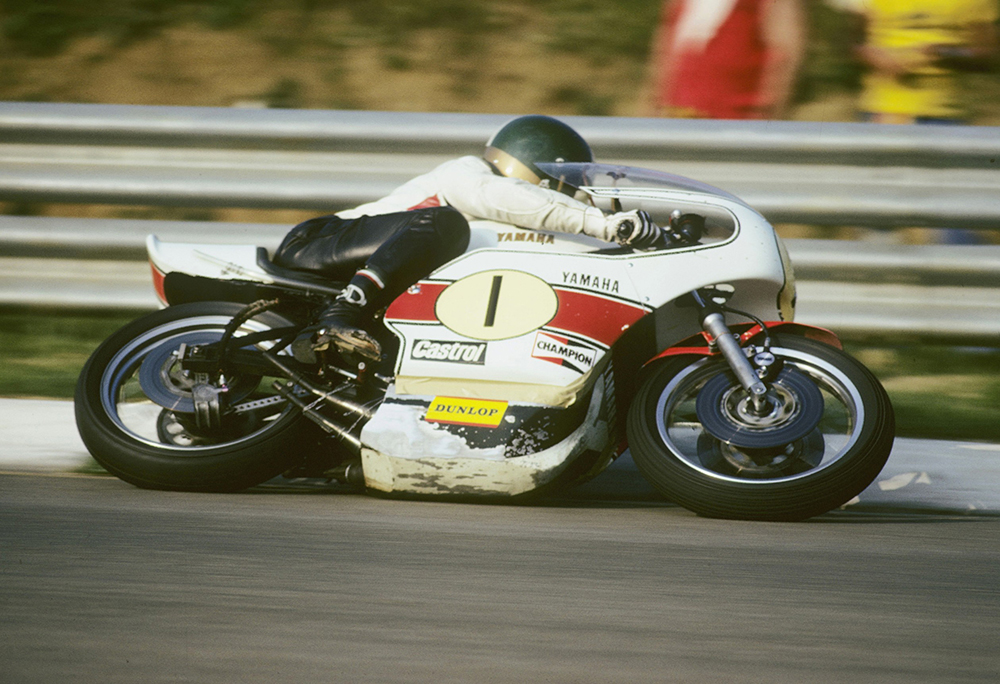 This success – his final world title – was almost certainly his greatest, because he didn’t enjoy the performance advantage he had enjoyed during his MV years. Although some people question the Italian heartthrob’s abilities, Mackay has no doubts at all about his talent:

“I don’t think Ago got the credit he deserved for riding. Maybe he was a bit past his best when he came to Yamaha, but I’d already seen him ride at the TT – f***ing hell, that was a sight to behold!

“He was everything a racer should be. He looked after his condition, he knew everything there was to know about the bike and he left no stone unturned trying to make it better. He used to sit there for hours with Mizoguchi. It was brilliant working for him because he wanted to know everything you were doing, which showed real interest.

“And if we had to work through the night he’d never go to bed without coming to see us, then he’d organise someone to come in with sandwiches and coffee at one in the morning. It was a real tight team, everyone helped everyone else. And Mizoguchi never left us, even if we worked till five or six in the morning.

“Ago’s intelligence kept him up there because he could get the best out of the bike and his determination to beat the MV made up for being a bit over the hill.” 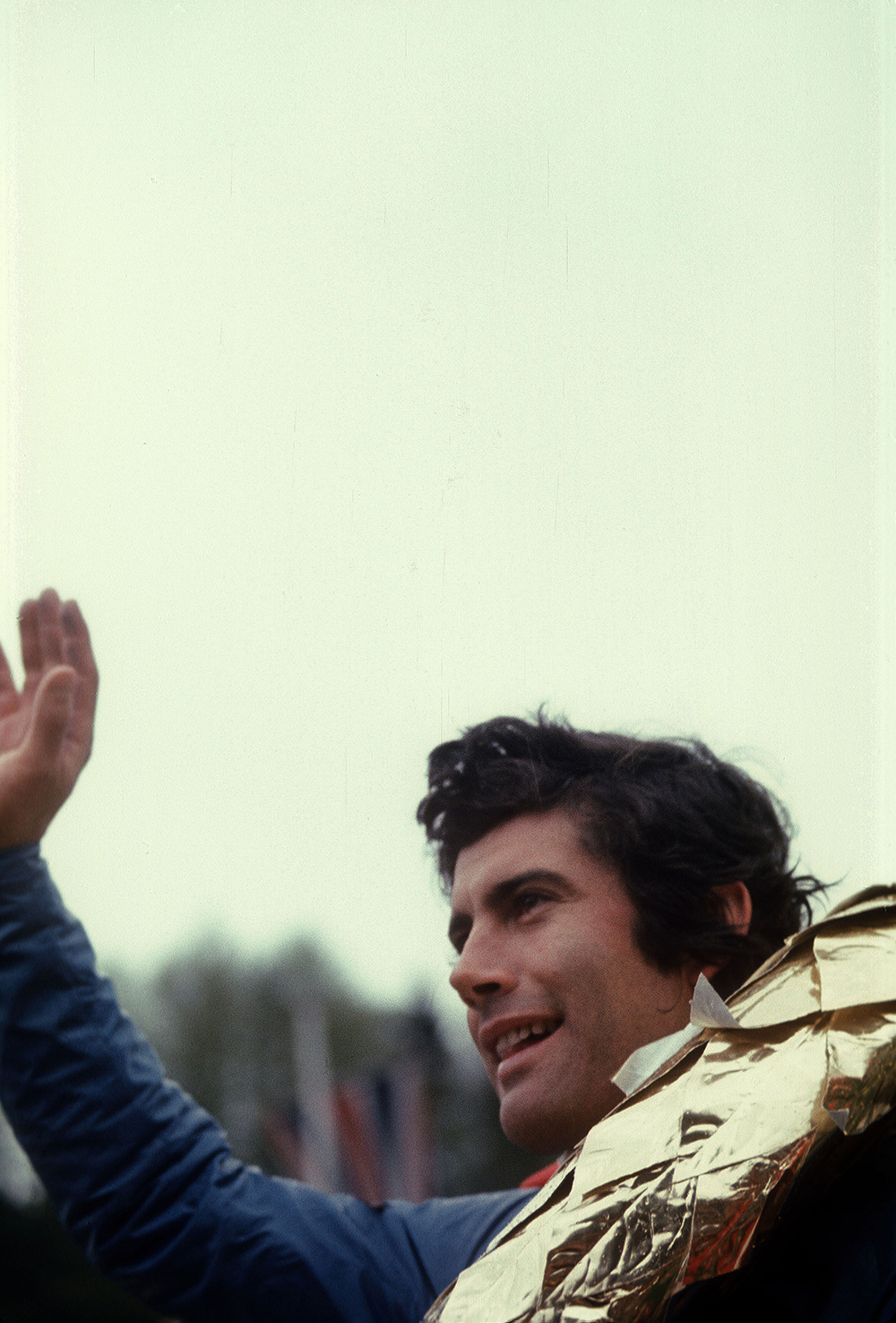