Big, long, and plush, the Ultra Limited has the comfort and equipment to take you almost anywhere

It’s big! Cars don’t try and share a lane with you when you’re on Harley-Davidson’s Ultra Limited. One wag quipped that it must be like sitting on the roof of a Landcruiser with handlebars. Yes, it’s big. Yes, it’s burley, but that’s not by accident. It’s adorned with all manner of bell and whistles and it’s very good at doing what it is designed to do; punching out vast kilometres in a comfortable fashion while allowing you to drag along the contents of half your house.

A bike of the Ultra’s size and weight takes some acclimatisation, if you’re not used to a bike of its magnitude. My first experience of it was when I jumped off a mid-sized nakedbike at Kangaroo Valley in New South Wales’ southern highlands. I don’t recommend learning the quirks of a motorcycle that weighs almost half a tonne in an area littered with 45km/h hairpin turns. 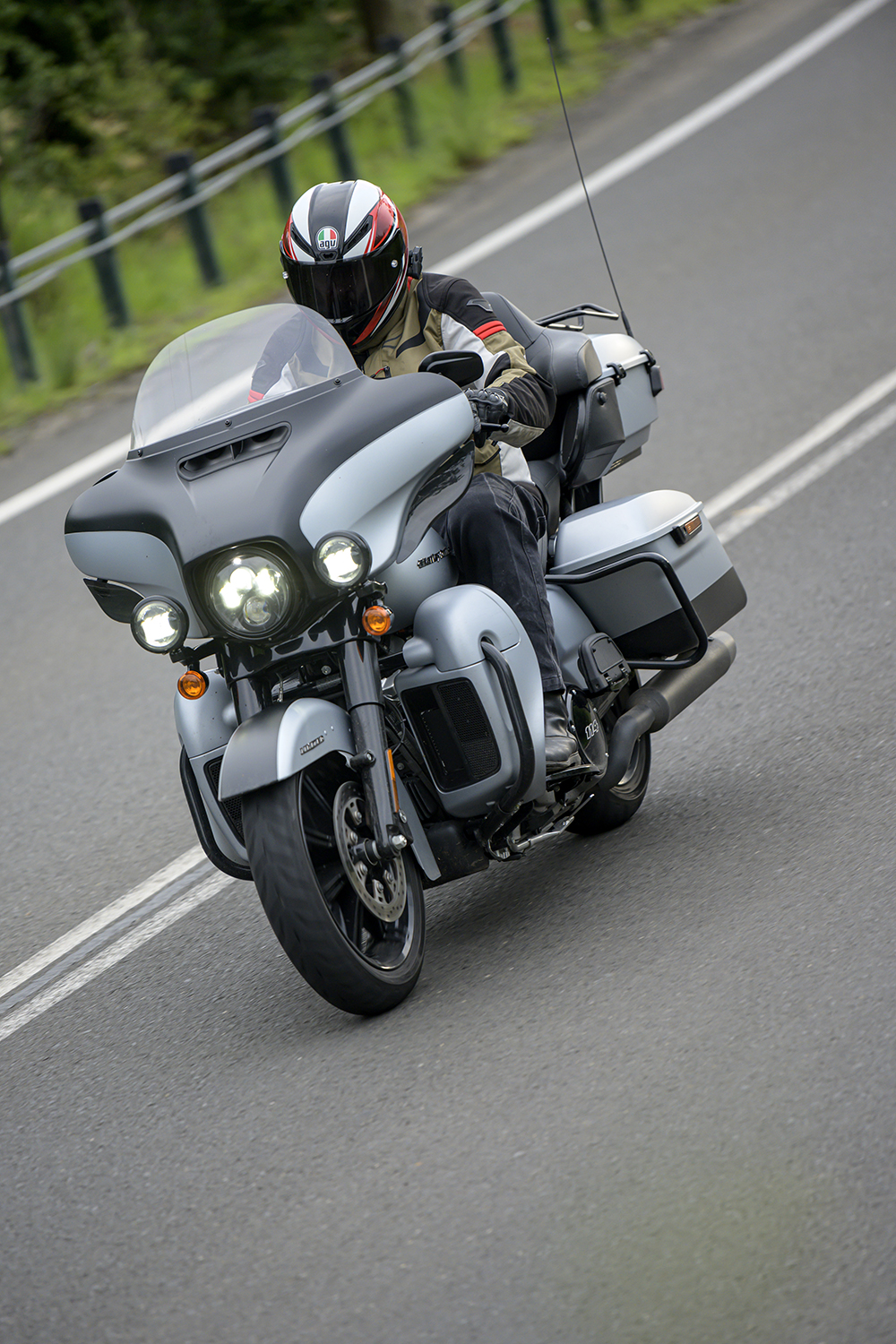 I did and I survived, but it took a fair bit of concentration and required a fair swag of skill. Add to those parameters a solid downpour and a splattering of diesel on the racing line and the Ultra had me feeling like a novice again. But point the Ultra at more open sweeping corners or a highway and not only does the big girl start to make really good sense, but you also start to appreciate it.

The Ultra Limited received the firm’s Twin-Cooled Milwaukee-Eight engine platform in 2017, giving would-be owners the choice of a 107 or 114 cubic-inch capacity. In 2019, it was made only available in the larger 114 cu-in (1868cc) option and that continues for 2020. 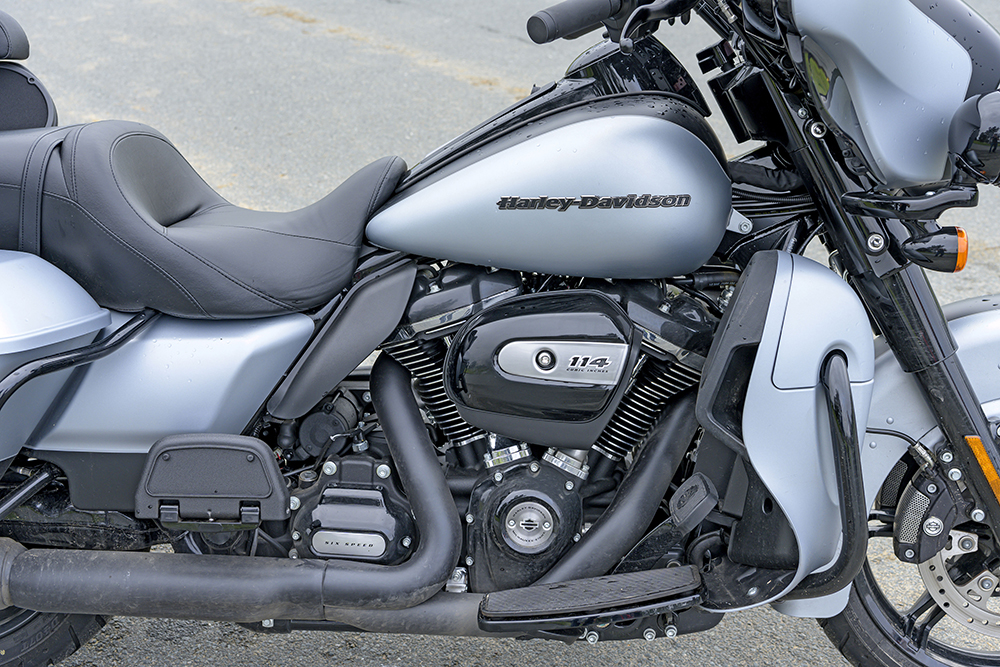 Harley doesn’t supply outright power figures, but once you’ve ridden the Ultra you come to realise that torque is king here; power is of less importance. The eight-valve monster V-twin propels the 400kg+ behemoth along with gusto thanks to the 164Nm of torque, and that smooth and plentiful torque and low centre of gravity also add to the surprising ease of manoeuvring at slow speed once you get used to it. The 114 puts its power through a typical agricultural-feeling – but perfectly functional – Harley six-speed box. The beauty of having all that torque, is that you can jam the Limited in sixth gear and leave it there for the most part. Maximum torque is produced at 3000rpm, so there’s no need or point in revving the bejeezus out of it.

Braking is handled by a linked electronic Brembo setup, which sees a small amount of rear brake electronically applied with the manual application of the front, and vice versa. Front brake performance is adequate rather than good and, if you’re upping your comfort game by moving from a sports-tourer or an adventure bike, then the front stoppers probably aren’t going to wow you with their power and feel. Rear brake performance is fantastic, however, and it’s a very useful tool for getting such a big bike through slow turns. 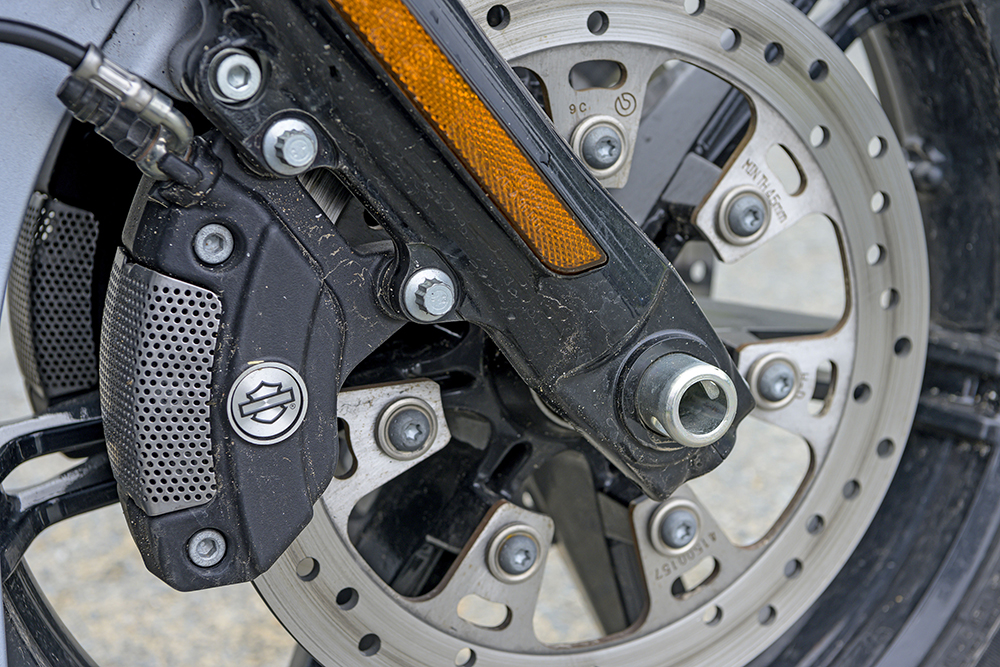 Front pogo duties are looked after by a non-adjustable Showa fork up front and single rear shock out the back that offer preload adjustment via a remote adjuster. Both the front and rear suspension is plush enough to make the ride a magic-carpet affair, even over really rough roads, but also doesn’t get itself out of shape if you do pick up the pace a bit. Impressive for a bike of this size.

Despite Harley’s reputation for its lack of modern innovation, the Ultra Limited packs a whole heap of technology under its clothing. The Ultra runs Harley’s Reflex Defensive Rider System, which is a safety pack that includes lean-angle sensitive linked brakes, ABS and traction control and Drag-Torque Slip Control, which reduces the effects of engine braking on the rear tyre, as well as a hill roll back prevention system and a tyre pressure monitoring system. 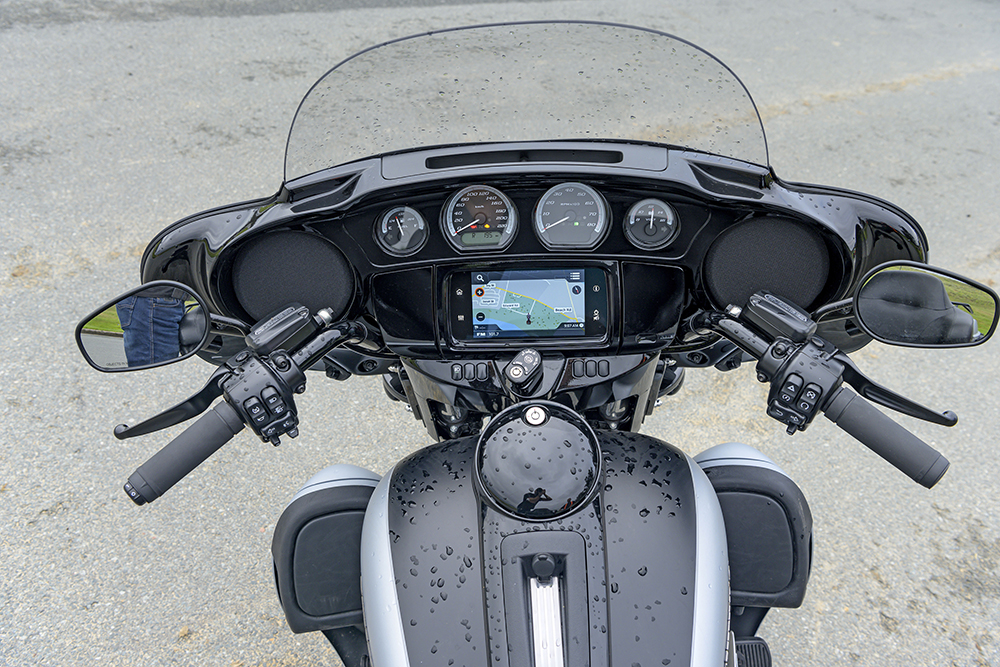 Adding to the extensive safety tech is heated grips, cruise control and a large and colourful TFT display that is a gateway to the new four-speaker Boom! Box GTS infotainment system. The myriad features are controlled by both switch blocks or via the 6.5-inch touchscreen, which gets a solid thumbs up for use when wearing gloves. The infotainment system offers satnav, device connectivity via Bluetooth and music from a variety of sources gets blurted out via two speakers up front and two at the rear. There’s a neat device compartment on the right of the TFT screen that boasts a hard-wired USB cable for charging duties.

Fuel, speed, revs and battery voltage can all be monitored via analogue gauges that are perched within the Batwing fairing, just above the infotainment display. 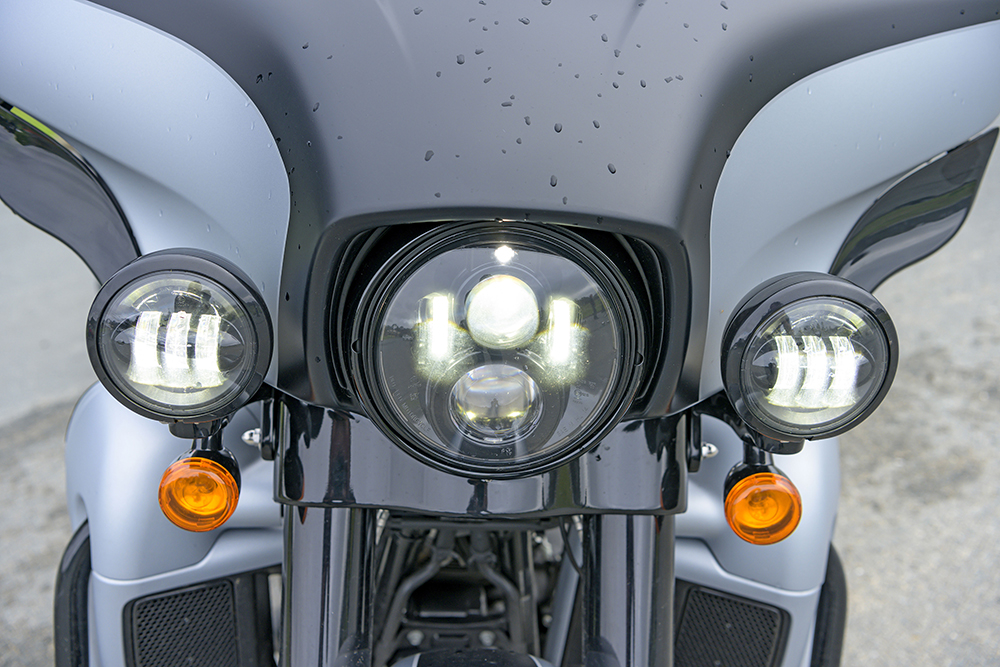 Comfort and mile-munching prowess are the Ultra’s modus operandi and it excels at both.

The rider’s seat is massively comfortable and relatively low at 740mm, but the pillion seat with its armrests, speakers, power outlet, back support and vibes from the Milwaukee Eight V-twin resembles a coin-operated massage chair – in a good way. The fairing and screen offer fantastic wind protection and, with almost 23 litres of fuel on board, the Ultra has the ability to crack out serious kilometres and in serious comfort.

And having to ability to really get away calls for some serious luggage capacity. One-touch opening hard panniers and the monstrous taillight-encrusted top box offer enough room to carry everything you could ever dream of packing for a few week’s on the road and there’s even a rack mounted to the top of the top box for securing the kitchen sink. The top box – or Tour Pak, as Harley calls it – is big enough to fit two full-face helmets in it and, despite the ‘Pak’ moniker, it’s standard fitment. 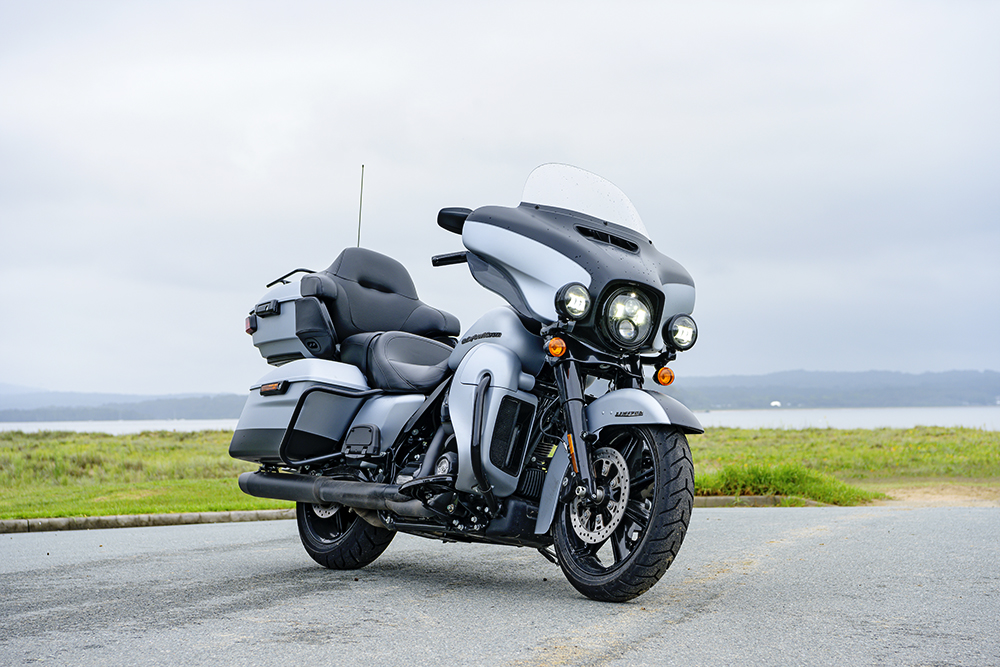 At 416kg ready to ride (and over two and a half meters long) the Ultra Limited is massive – there’s no getting around that. If you’re stepping over to the luxury tourer from a smaller bike, it will be a bit daunting and, until you get used to it, even pulling up at a set of lights can be a fairly nerve-racking experience if there’s so much as a pebble under foot.

Moving the Ultra around in the shed is safer when seated rather than trying to push it around, and watch out for that odd ‘I want to throw you off balance’ feeling if you throw it into full lock. Once you’re rolling though, it hides its weight well – until you try and put it through a corner with any kind of enthusiasm. If you’re looking for something to punt over a mountain pass on your way somewhere, well perhaps a sports-tourer is more up your alley; that’s not what the Ultra is designed to do. The Ultra is in its natural environment on highways, freeways and wide-open country roads. 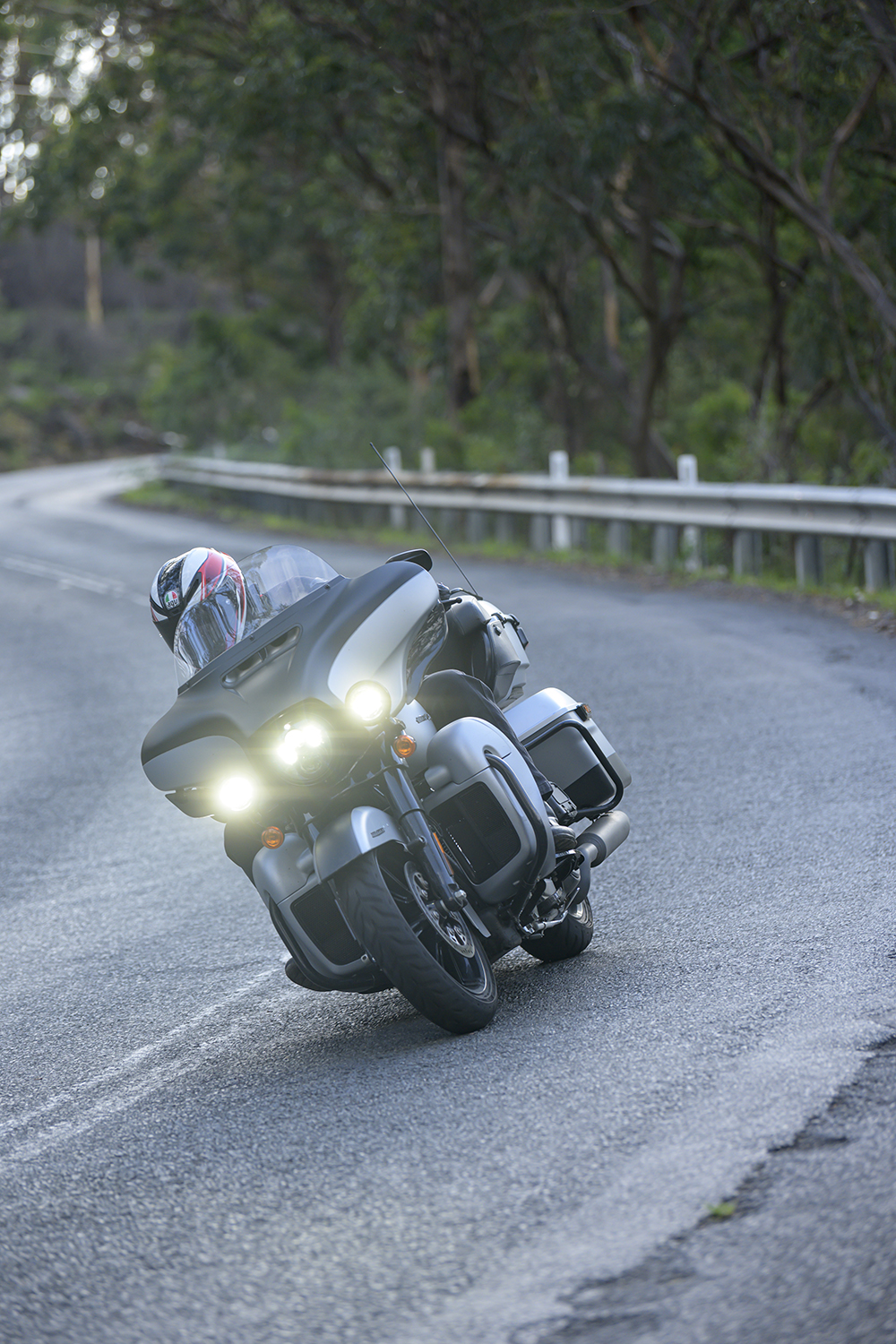 Pricing on the Ultra Limited starts at $41,495 (+orc) which puts it a whisker above its closest comparable competitor, Indian’s Roadmaster at $41,995 (ride away), and in the same ballpark as more contemporary big tourers like BMW’s K 1600 GTL and Honda’s GL1800 Goldwing Tour.

The Ultra Limited offers the comfort, luggage capacity and technological trinkets to make it a supreme long-distance mount. And Harley’s talent for offering all manner of bling – including 13 colour options – means the choices for customising your long-haul ride have never been better. 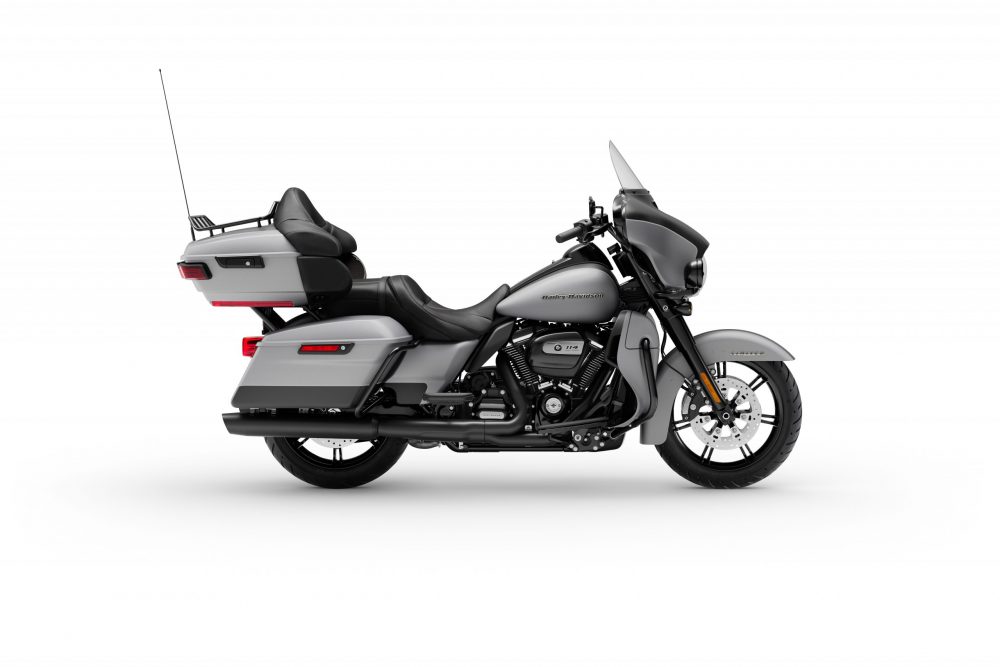