SUPER-STUNT SPECTACULAR | He did what?

Up in the Hunter Valley it was a time when Sunday afternoons in Autumn were set aside for solos, sidecars and stockcars at Jerilderie Park. But on 28 May, 1978, the quarter-mile oval at the end of Old Punt Road had become the Newcastle International Motordrome and a reported crowd of 10,000 had turned up for the Australian Supersport Spectacular – complete with fairy floss for the kids, a beer for dad and dagwood dogs for all.

After wheelies, stoppies and the motorised clowns, came the headline acts; first up was Spike Cherrie with the Cannonball, who deliberately slammed his trail bike into the driver’s door of a car wreck, catapulting himself through the air to land on a couple of mattresses 14 metres away. Nothing broken (although the front wheel of the trailbike needed respoking) and applause erupted all around. 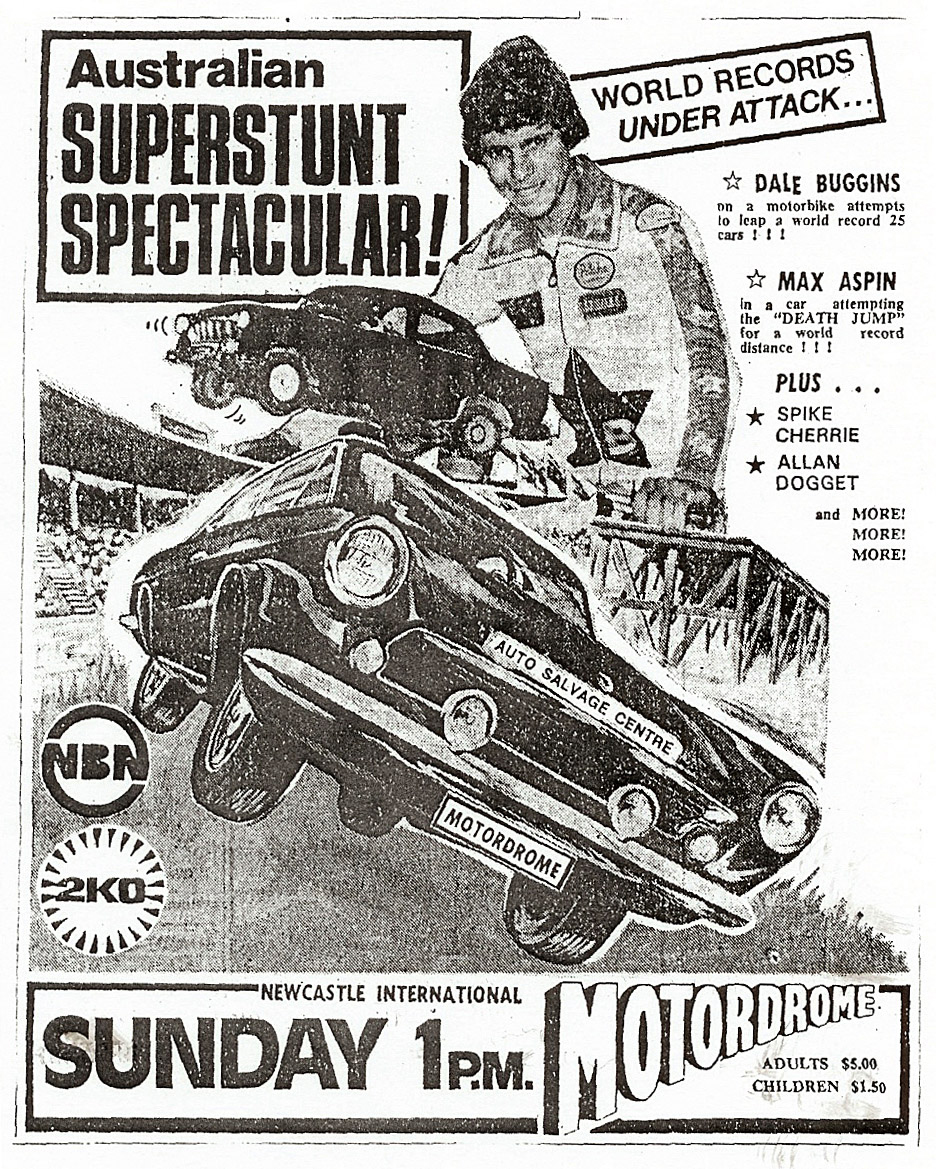 Next up was Max Aspin and his Death Trap act. Driving a ratty FC Holden sedan off a ramp at better than 100km/h, Max hoped to reach a height of 14 metres and a distance of 30 metres. The FC did neither, and needed far more than a front wheel alignment when it was finally towed from the arena.

Then, shortly after three o’clock, Dale Buggins fired up his two-stroke Yamaha YZ250, grinned towards his mum and dad Ken and Jan, waved to little sister Chantell, then lined up the ramp in the centre of the arena. Buggins hit the home-made timber ramp at top speed – around 160km/h – he cleared the 25 cars parked tightly side-by-side and made a perfect rear-wheel landing on the other side of the arena.

A new world record was set and he was awarded prize money of $10,000. Though anyone who’d not witnessed Dale’s amazing feat that Sunday afternoon, would tell you Evel Knievel was the world record holder – for any motorcycle stunt. Such was Knievel’s mastery of self promotion.

By the time nine-year-old Dale Buggins began riding a minibike around his backyard, Evel Knievel, who’d lived from roadhouse to roadhouse touring a stuntshow across the backblocks of the USA, had achieved worldwide fame for crashing while attempting to jump the Caesar’s Palace fountains in Las Vegas. In fact, that universally publicised crash was his third successive failure, his total list of injuries growing; crushed pelvis and femur, hip fractures, several broken ribs, broken right arm, knee and left wrist. And concussion that left him in a coma for almost a month. 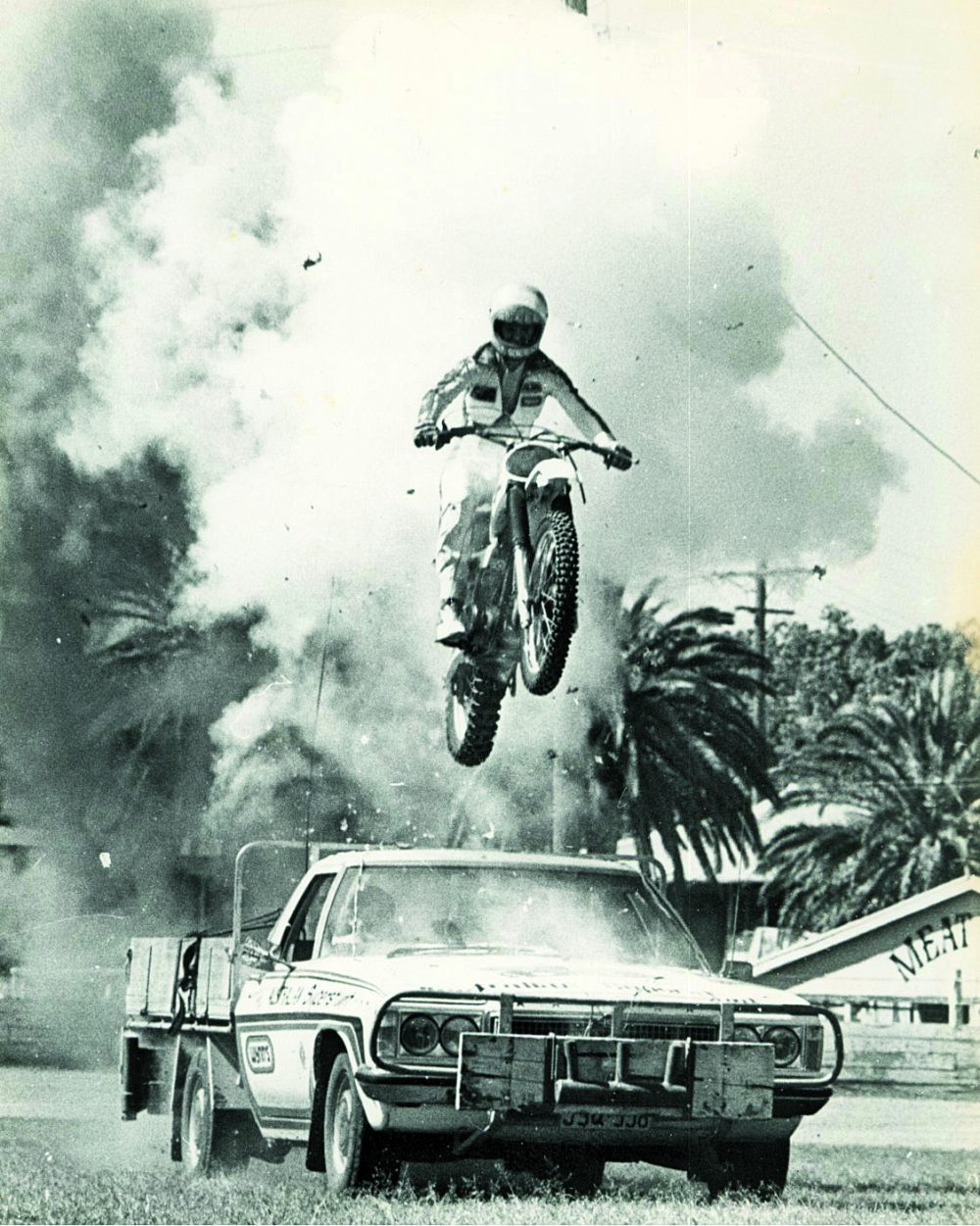 Buggins, now with his sister Chantell performing some amazing high-wire stunts in combination with his two-wheeled skills – and father Ken managing safety and logistics – spent the best part of three years successfully touring Australasia. Yet even after setting the world record of jumping 25 cars – the best Knievel ever achieved was 16 – Dale still idolised the infamous American, thinking if he didn’t have Knievel’s fame, he mustn’t have held the same abilities.

Dale’s inevitable US Tour was meant to change all that. He travelled by U-Haul over 20,000km in 12 weeks, staying in budget motels – it in no way matched the young talented stuntman’s expectations of show business. And there were simply not enough shows to make the tour financially viable; shonky venues and dodgy promoters only exacerbated Dale and his family’s disappointment.

Tragically, shortly after his return to Australia, Dale purchased a rifle and killed himself with a single shot to the chest. Fame and fortune had proved elusive to the confusion of the thrill-seeking teenager. Dale, one of this country’s bravest and most talented stuntmen, was still three months shy of his 21st birthday. 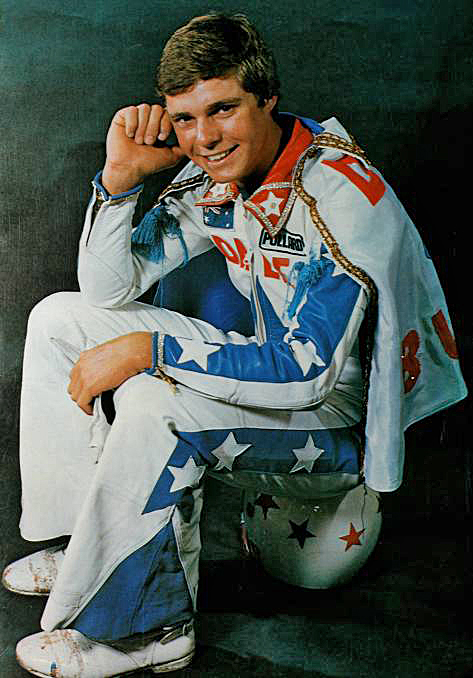