The SuperSport is akin to a Ducati Monster that absconded with a bunch of bodywork from the Italian marque’s Panigale section. Like the Monster 821 (AMCN Vol 69 No 08), the SuperSport is endowed with a versatile engine and great handling, but wrapped in sexy bodywork that makes it a better touring option than its naked stablemates. And while there’s no denying the Panigale Superbikes’ performance credentials, it’s probably not the first choice if you want to get your tour on.

First introduced in 2017, the SuperSport promised Panigale-esqe looks in a comfortable, yet sporty package. The SuperSport is available in the fruity Öhlins-clad $20,250 ride-away S model, or the $18,00 ride-away base model. While the S with up-spec suspension and a quickshifter is an appealing option, the base model provides excellent value for money if you’re after a European machine with smart looks, comfort and superb handling.

The SuperSport is powered by Ducati’s 937cc 90° V-twin engine putting out a respectable, if not arm tearing, 81kW of power at 9000rpm. Though despite its healthy 93Nm of torque peaking at 6500rpm, it’s not until you get up around there that it really gets moving. The liquid-cooled Testastretta engine will bog down and can feel sluggish if you let the revs drop too low, but if you keep the engine between 5500rpm and 9000rpm it’s a hoot and has more than enough squirt to keep you amused.

The Ducati’s gearbox is smooth but sometimes throws a false neutral into the mix between fourth and fifth, followed by a resounding clunk as you snick it back into gear. It’s a reasonably rare occurrence, but it’s a trait and you need to be mindful of it when changing up through the six-speed ’box. 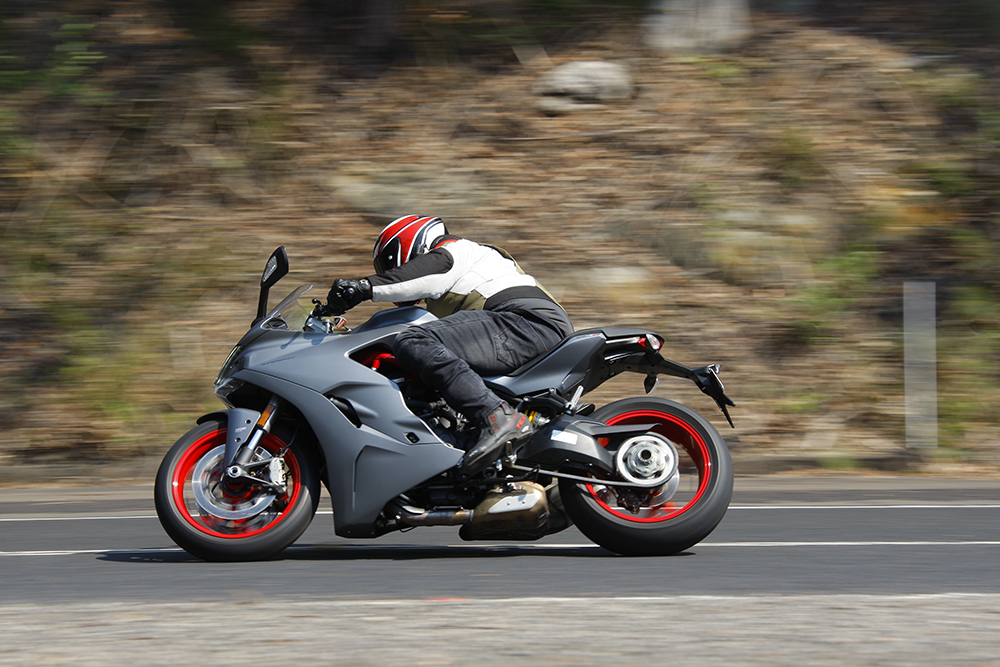 The clutch works as it should in all but in slow-moving congested traffic, where the engagement and disengagement is abrupt. And combined with asthmatic engine performance under 3000rpm, it can make for a choppy and tedious commute. Commuting duties are further hampered by the heat radiated off the engine and trapped by the fairing – great in winter, no-so great in summer.

For a standard exhaust the factory fitted unit looks and sounds terrific. The twin-outlet muffler pokes out just aft of the rider’s right footpeg. It’s pleasing without being loud, and resonates with a satisfying burble and pop on deceleration reminding you you’re riding a V-twin Ducati.

Compared to the level of electronic wizardry available on a lot of more expensive bikes these days, the SuperSport’s electronics war chest is relatively bare. ABS, traction control and three ride modes are all that nestle in the standard package, and while the omission of cruise control is somewhat disappointing, it’s probably acceptable when you’re riding away on the thing with plenty of change from $18K. 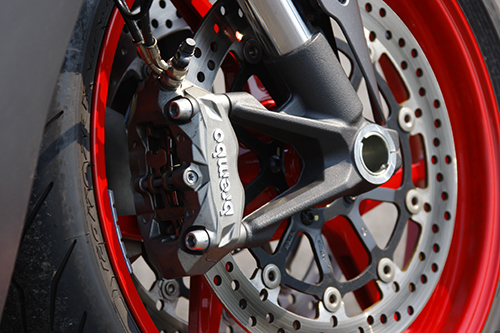 And when you’ve got such a versatile and user-friendly engine at your disposal, the switchable engine modes – Sport, Touring and Urban – are probably overkill. I didn’t leave Sport mode after sampling the other two modes, which do noticeably alter the output – but perhaps a Sport and Rain may have been more practical options. If the time does come to change modes, it’s as simple as selecting your preferred mode, getting off the gas for four seconds – that’s longer than it sounds – and hey, presto. 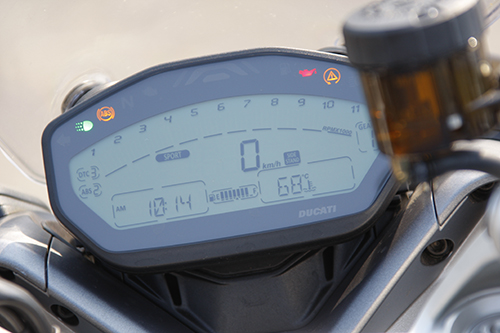 All the info is displayed on an LCD screen that looks a bit dated these days but it’s refreshingly easy to use. Even without the obligatory TFT display carried by swathes of modern bikes, it provides you with everything you need in a no-fuss uncluttered manner and doesn’t require a PhD to operate. 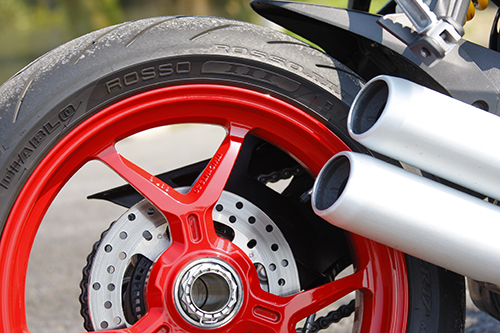 The SuperSport resembles the Panigale from afar, it’s a smart-looking bit of kit, with LED daytime running lights, its front indicators integrated into the mirrors and new-for-2019 titanium grey paint work with a red trellis frame and Y-spoke wheels. The quality of finish is beyond reproach.

As is the very point of this bike, the ergonomics are great. The high clip-on style ’bars sit above the top clamp which keeps pressure off your wrists, with the stream of air coming off the small adjustable screen at highway speeds reducing the weight off your wrist further. The footpegs sit low compared to its Panigale siblings which provides a relaxed leg position, and with a comfortable seat it’s got the goods to be a fantastic long-haul mount. Pillion accommodation is comfortable, too, but the Supersport lacks grab handles so you’ll be getting hugged. 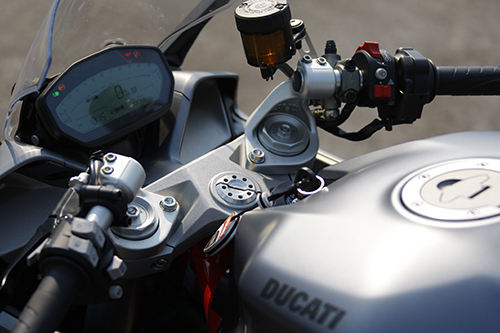 The handling is nothing short of glorious, it turns in when you tell it to, it’s rock steady through said turns and you can alter your line once committed with ease. The SuperSport laughs at mid-corner bumps and there wasn’t an area that exposed a shortcoming. The factory settings on the adjustable Marzocchi fork and Sachs rear shock are near perfect for my 105kg of lard, so may need tinkering with the adjusters if you’re a lighter unit.

Keep the SuperSport’s engine on the boil, and the torquey, powerful engine lets you fire out of the corners hard on the gas with the traction control sitting in the background for peace of mind. The power isn’t intimidating, and combined with the superb handling, it makes for a really playful experience. There’s no reason why you couldn’t rattle off the occasional track day on the Supersport with the low-ish set footpegs the only limiting factor. 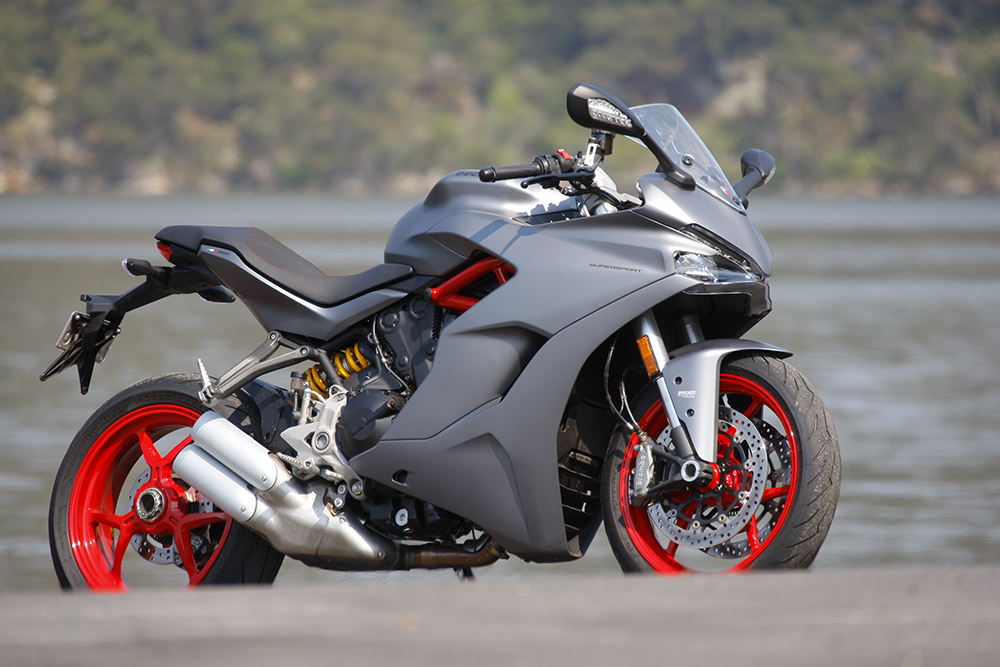 Radial-mounted, ABS-equipped Brembos front and rear get the job done very well, the initial bite and power is great and if you find yourself needing more braking performance you may like to consider picking up a Panigale brochure.

At 110km/h, the 11° Testastretta twin buzzes along at 4500rpm and when I say ‘buzzes’, I really mean it. There’s a lot of vibration through the whole bike, but it’s especially noticeable through the bars and the mirrors. On long stretches of freeway the vibration brings on pins and needles in your hands. For whatever reason, the vibration seemed more prominent in the right ’bar and played havoc with the image quality reflected in the mirrors (which was mostly of my elbows, anyway).

The sports touring segment is a competitive one, but it’s actually surprising there’s not a lot more SuperSports on the road. Despite a few niggles which you could very quickly learn to live with, at $17,790 on the road, its fantastic bang for buck. It’s comfortable, it looks stunning, goes really well and handles even better.

And something a bit different in a sea of Japanese competitors. 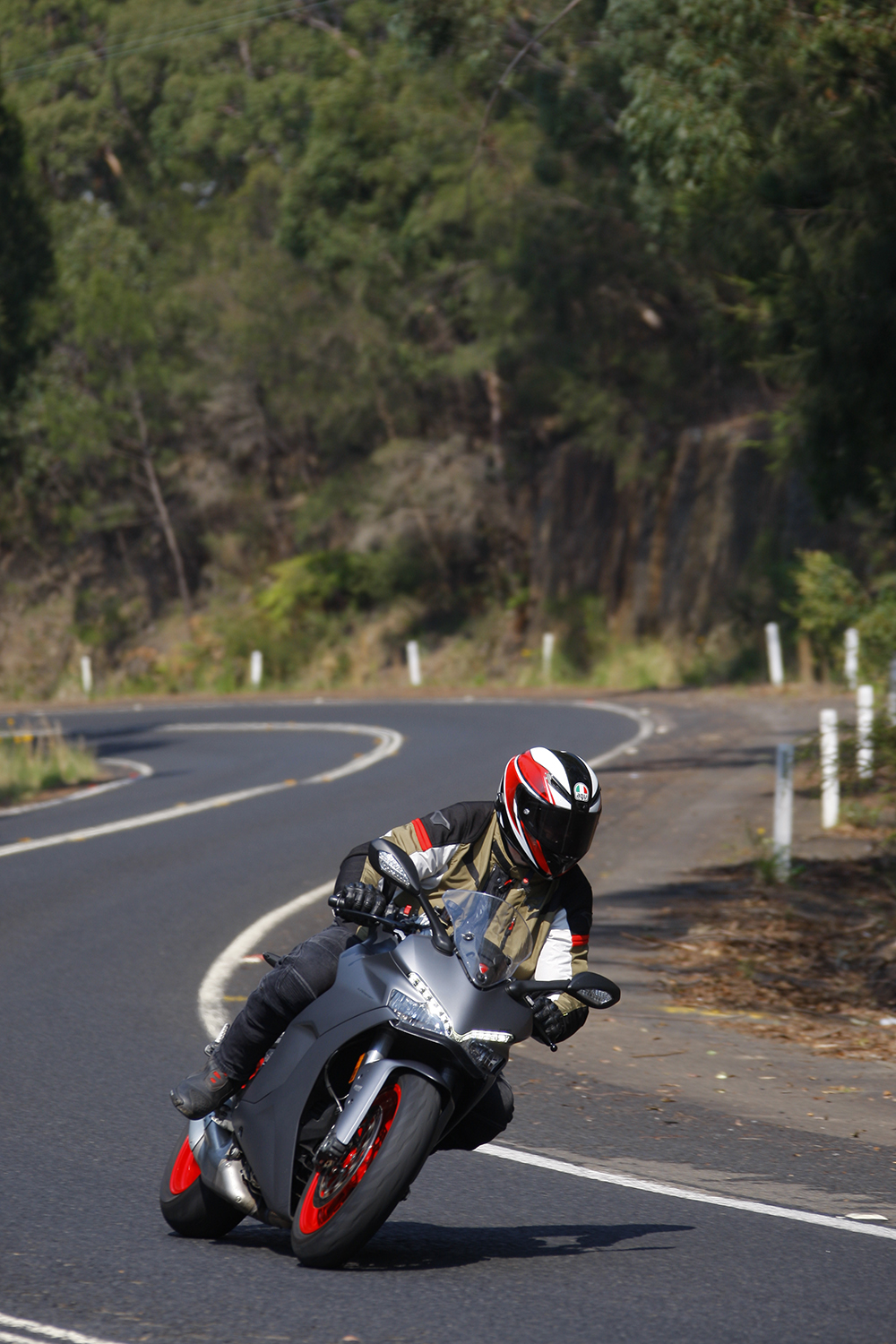