For the third time in seven days Monte Coralli provided bright and summery conditions for MXGP as the Grand Prix circus again attempted the Italian hard-pack. The fixture brought an end to the first triple header in the country. The FIM World Championship will pause for a week before moving to the compact and sandy venue of Mantova for the next flurry of races in the 2020 calendar. Red Bull KTM tackled the Grand Prix of Emilia Romagna with both Jeffrey Herlings and Rene Hofer absent through injury.
MXGP
Tony Cairoli – The Sicilian couldn’t find the speed for a competitive lap-time in Timed Practice and could only take to the start line in 18th position for both motos. The power of his KTM 450SX-F helped towards two excellent starts. Cairoli was running 3rd behind Jorge Prado and Jeremy Seewer in the first moto and inherited 2nd place when the Swiss crashed. In the second race he was part of an entertaining battle for the runner-up position and posted a 2-2 scorecard by the end of the 30 minutes and 2 laps distance. With 44 points Cairoli achieved his 91st GP win, his 169th podium finish and his second victory of 2020. Cairoli closed to within 22 points of Jeffrey Herlings on Wednesday and his latest haul in Faenza allowed the nine-times world champion to take control of the red plate – by 7 points From Tim Gajser – for the first time since the 2019 Grand Prix of France. 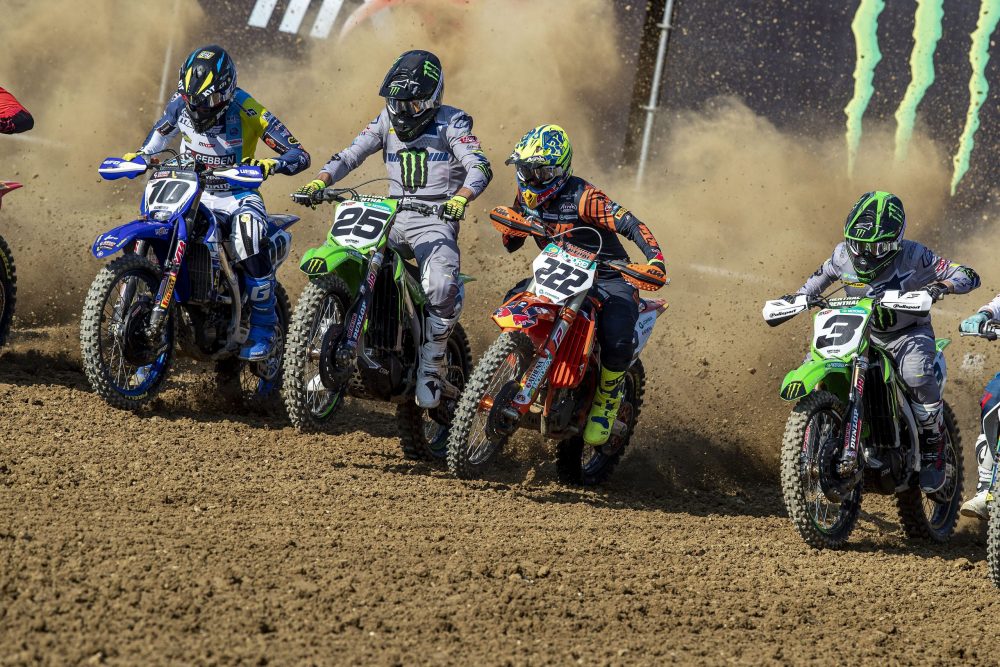 Jorge Prado – Fresh from his maiden Grand Prix victory the previous Wednesday, Prado entered the meeting dealing with a stomach illness. Two more holeshots proved to be an enormous assist for the Spaniard. He broke free to win the first moto and was helped by Seewer’s fall on the second turn of the lap. The checkered flag was his first in the premier class as he had celebrated overall success four days beforehand thanks to a 2-2 results. Prado again led the formative laps of the second moto but his physical condition suffered due to his sickness. He rode to 6th, which was still good enough for 3rd overall behind Cairoli and Tim Gajser. Prado has gained good ground in the championship standings, and since he began his maiden season in the premier class underprepared due to a winter leg injury. He now sits in 5th position and is 18 points away from further promotion.
Tony Cairoli: “I’m really happy to win again, especially because I was struggling a lot with the knee in the morning. 18th in Timed Practice was not good for confidence but I know I can defend a good rhythm in the race and I had the fitness to push. It’s great to win and have the red plate. Of course, we miss Jeffrey. We wish him a speedy recovery.” 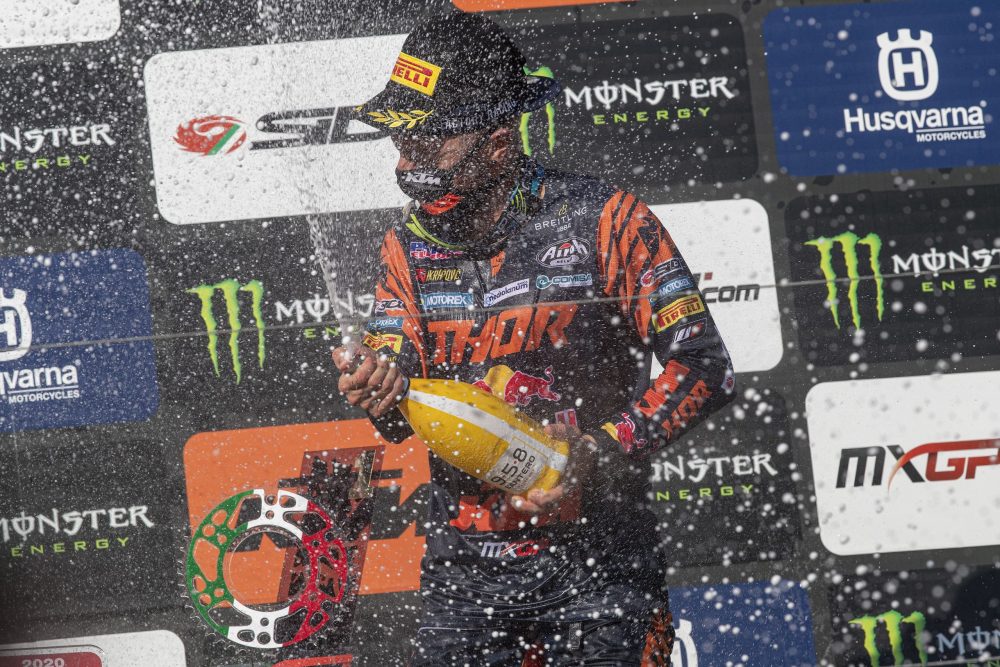 Jorge Prado: “I’m feeling quite good with the bike at the moment and speed-wise it’s positive. I’m happy I could get my first moto win today. I used a lot of energy and I gave my maximum to get that win and I had an empty tank for the second moto because I was sick in bed yesterday. I’m happy I can be up here on the podium. I think I did a very good result in the circumstances.” 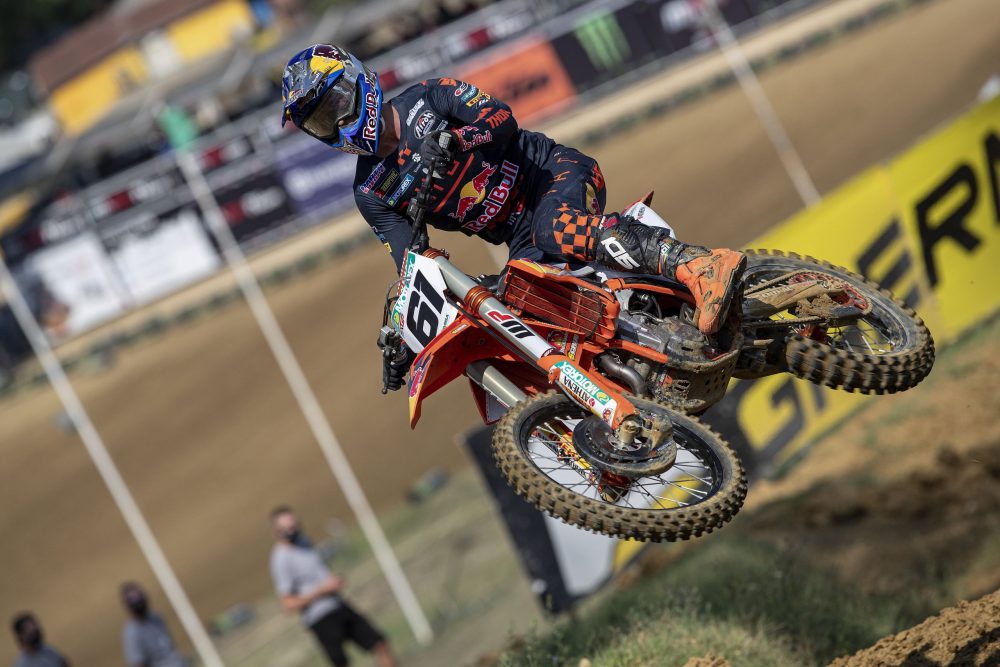 Claudio De Carli, Team Manager: “The triple, one-day format was quite good for us. It meant we could focus closely on our job for one week. Tony suffered a bit with the morning sessions but he’s working on it. When it comes to the races though we know very well what he can do. It was sad for Jeffrey with his crash but we’re thankful it was not more serious. It changed the championship picture but the red plate is still in KTM ‘orange’. We will keep pushing so it stays this way. The whole team is working very well and we should not lower our guard. It is not only the staff at the track but also those at home and in Austria who are putting in great effort for us to have these results. I’m also very pleased that Jorge took some important points this week. We didn’t know if he could ride today but he pulled through and did something pretty special. Faenza did an excellent job with the great track preparation so full credit to the organizers for the week here.”
MX2
Tom Vialle – Vialle made his customary strong start and 10th holeshot from 15 this season thanks to the efficiency of the KTM 250 SX-F. He dueled briefly with perennial rival Jago Geerts and crossed the finish line in 2nd position, closely followed by Thomas Kjer Olsen. It was Vialle’s 12th top three moto result from 15 in 2020. In the second race the Frenchman again fronted the pack (holeshot #11) and this time kept distant from Geerts. The pair tied on points but Vialle bagged his fourth win and seventh podium of 2020 and keeps his 21 point advantage at the top of the championship.
Tom Vialle: “After finding the first moto a bit difficult I was feeling really good in second moto. My lines were coming easily, so I was pushing and everything was flowing. I’m really happy to win again: twice in a row is fantastic. It was a really good weekend.” 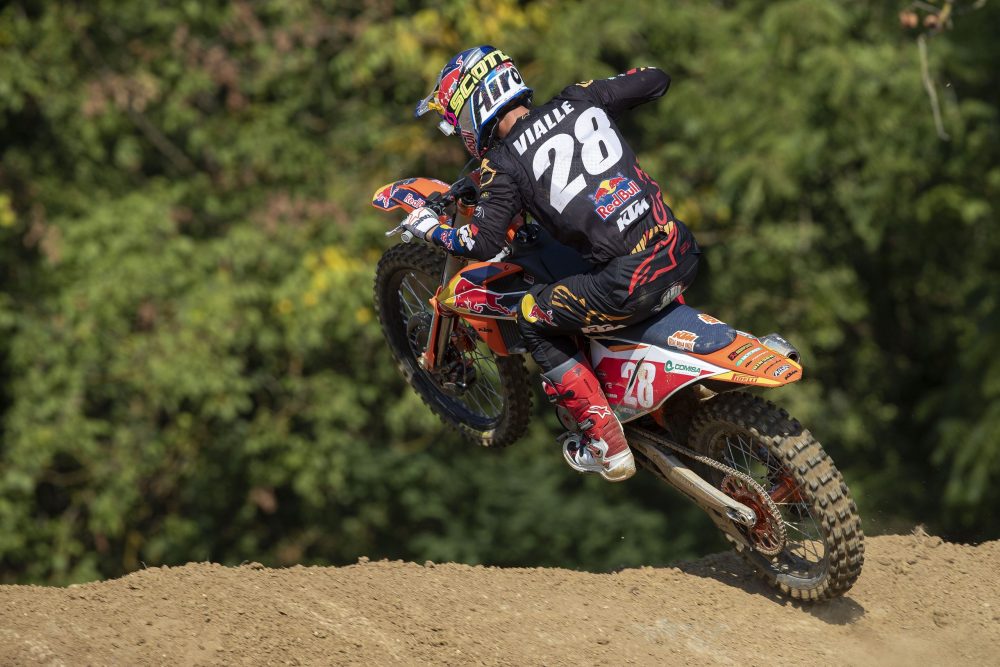 MXGP comes together again with the Grand Prix of Lombardia on September 27th.
Next