Imagine yourself out on the racetrack somewhere nearly 50 years ago, riding Yamaha’s first-ever twin-cylinder 125GP customer racer. You’re running up front in the 125cc field, trying your best to keep pace with the leaders when you’re suddenly zapped under brakes by someone sitting bolt upright on a Suzuki Stepthru scooter.

It’s a bike that has no right to be on the track in the first place, let alone running so hard and up at the pointy end of the field. But in 1970 loads of people had to put up with their purpose-built racebikes getting beaten by Graeme Laing on his tuned-up 115cc Suzuki Stepthru. Promotionally speaking, if you can race up front with something different it’s improbably effective. That was the reasoning which led the founder/CEO of the Melbourne Motorcycle Company which was the Victorian distributor for Suzuki motorcycles to establish the potential of the Japanese brand by going racing. Back then, Suzuki was very much the poor relation of its rival Honda and Yamaha compatriots in world markets. And here in Australia, the brand had no sporting credentials at all – so Laing set about acquiring some.

Slim, lanky and light, Laing himself was already a useful club racer, so in 1967 began racing what was eventually a hotted-up pressed-steel framed Suzuki A100 in his spare time between trying to establish Suzuki in the Australian marketplace. And although his 115cc Suzuki A100-2 enjoyed some hugely competitive seasons in the 125cc category, Laing had a better idea. With a keen eye on the promotional benefits, he hit on the idea of running a Suzuki F50 Stepthru in the 125cc class in 1971, fitted with the tuned A100-2 engine which had already brought him a heap of success.

In an interview with REV magazine, Laing was quoted as saying “if you can’t win, you may as well make a spectacle,” and on this unlikely machine, he managed to do both.

With the 115cc engine fitted to the scooter, he took it to Calder Raceway where, considering the chassis was pretty much dead standard, it went remarkably well. Then it was Phillip Island’s annual New Year’s Day meeting in 1971 – and just to make sure he got noticed racing what was already a standout machine, he wore a business suit (including collar and tie!) over his leathers, which attracted much hilarity! Next outing for the SuperStepthru was at South Australia’s McNamara Park, where the spoilsport Victorian ACU stepped in and decreed that what they termed “dressing up” was not in the best interests of the sport, and banned him from appearing in business attire. In its defence, the ACU said it had received complaints from spectators about “the man on the scooter racing without protective leathers.” 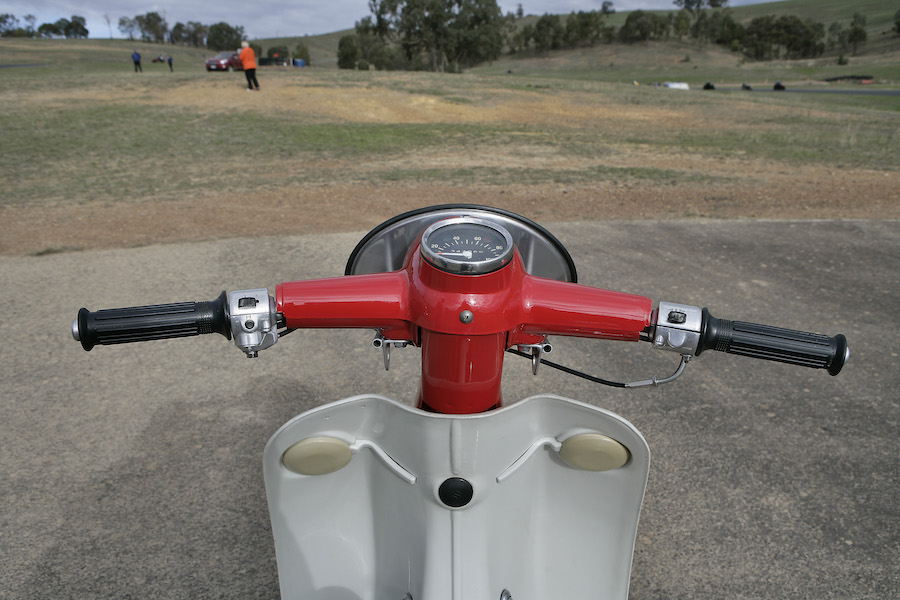 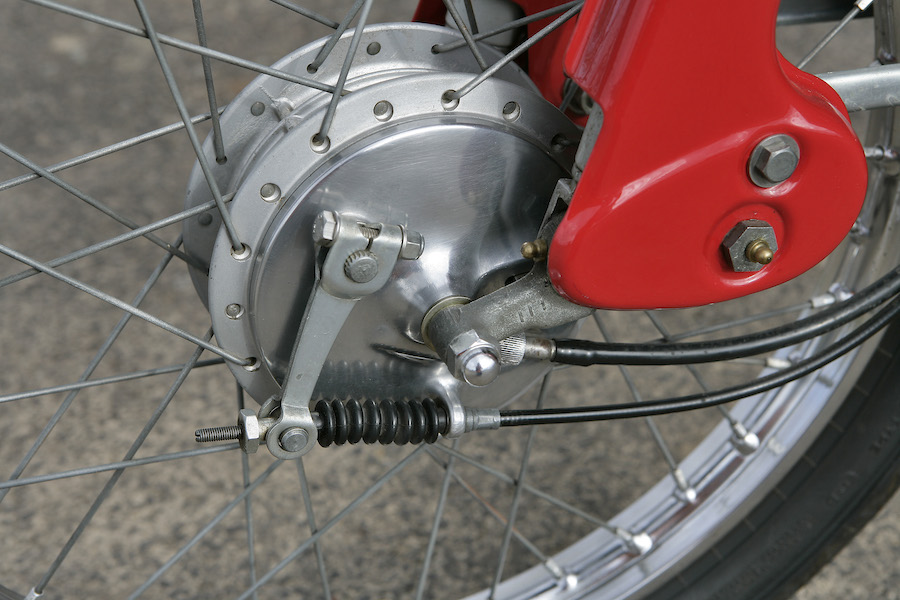 For the next couple of years the SuperStepthru became a firm crowd-pleaser. It was competitive enough to regularly finish in the top five, although the advent of the more potent Yamaha AS3 twins and the later TA125 customer road racer meant the 115cc A100 single was now down on power. But it was super-reliable, with its only two DNFs coming as a result of crashes. An occasional change of rings and a new set of points would freshen the motor up, and its handling was apparently quite reasonable.

Laing eventually sold the Stepthru to Rod Ward, who later sold it to Duncan Simons, who raced it occasionally until it needed an engine rebuild. To do this he gave the motor to local bike shop mechanic Peter White (and nephew of former Motorcycling Australia CEO David White), who admits he’s always had a fetish for stepthrus.

“I first saw the Suzuki when I was 14 and I fell in love with it. I had a Honda C90 myself, and I really used to admire Graeme’s riding – I saw him heaps of times at the Calder meetings.

“When I rebuilt the engine for Duncan I told him that if it was ever for sale, I wanted it, but he wouldn’t sell it. Then he went and loaned it to someone to ride at Broadford. The clutch was slipping and this bloke was mistreating it, so when it came back to me again I said, ‘You’re not getting it back, give me a ring when you work out how much you want for it.’” 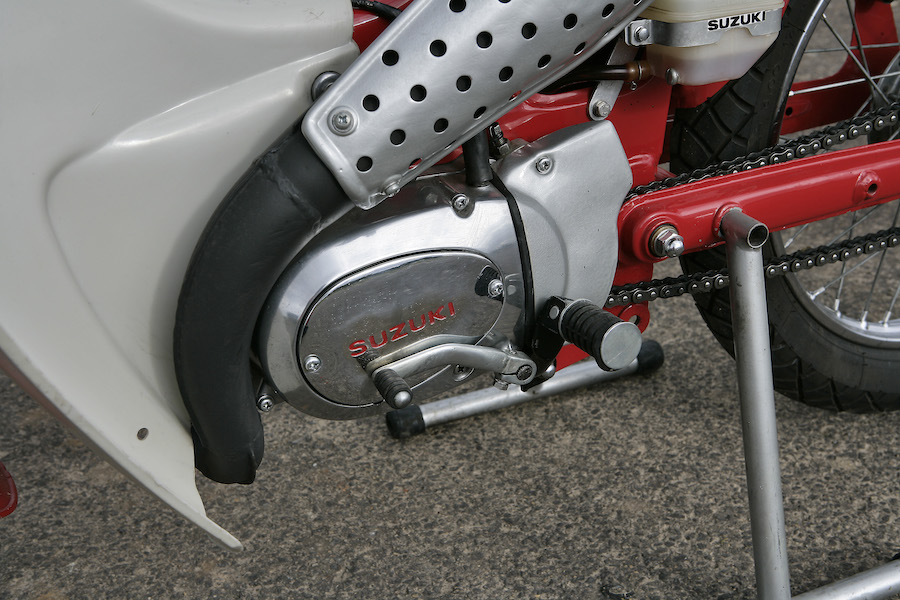 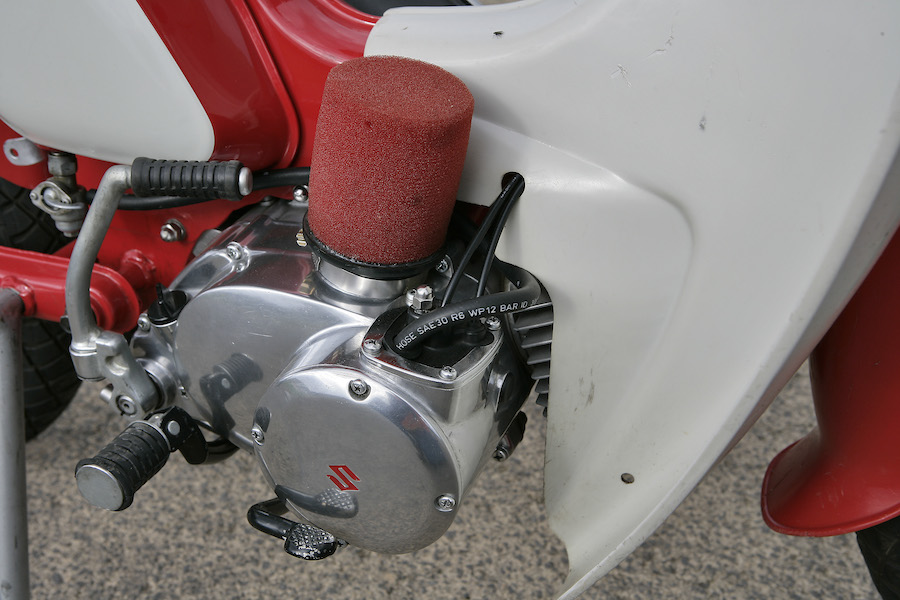 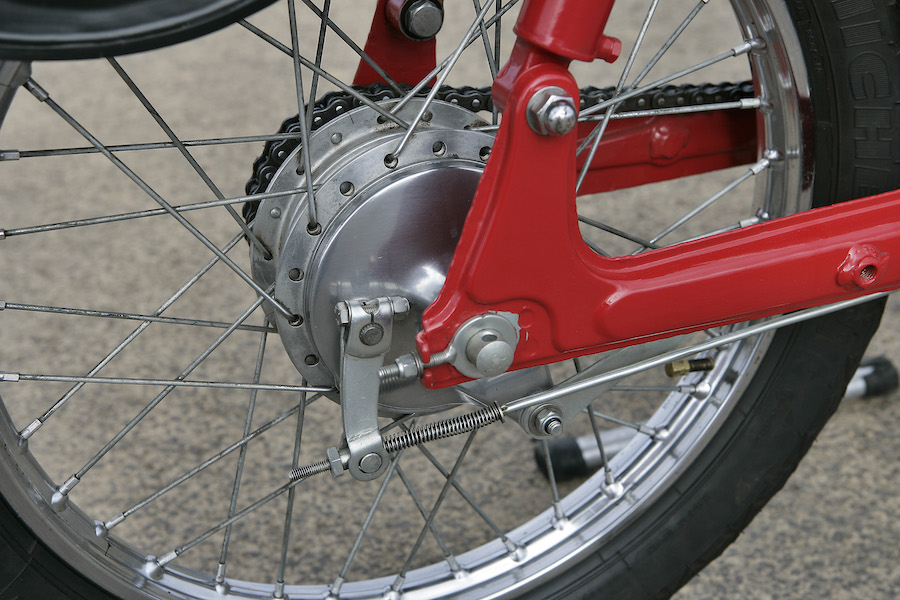 “I was testing a customer’s Kawasaki ZX-10 when I hit a car, went over it, then collected another car coming the other way. I broke my back, and didn’t ride anything for 10 years.”

But in 2005, with the Stepthru now restored, Peter entered it in the Australian Historic Championships at Symmons Plains in Tasmania.