Is racing about developing motorcycles in the white heat of competition or is it an entertainment show?

The battle for MotoGP’s soul was triggered by events that took place on two days more than a decade ago. On 29 October 2006, the last MotoGP race was held before the tobacco sponsorship ban took effect, which robbed the sport of its richest form of income.

Then on 15 September 2008, American bank Lehman Brothers went bankrupt. This is usually accepted as the day the global financial crisis really began; and it hasn’t yet ended.

No other branch of business was prepared to spend anything like as much money on bike racing, because the tobacco industry was already banned from conventional advertising. The loss of big tobacco’s filthy lucre was a huge blow to MotoGP: some teams shrank, others went bust. 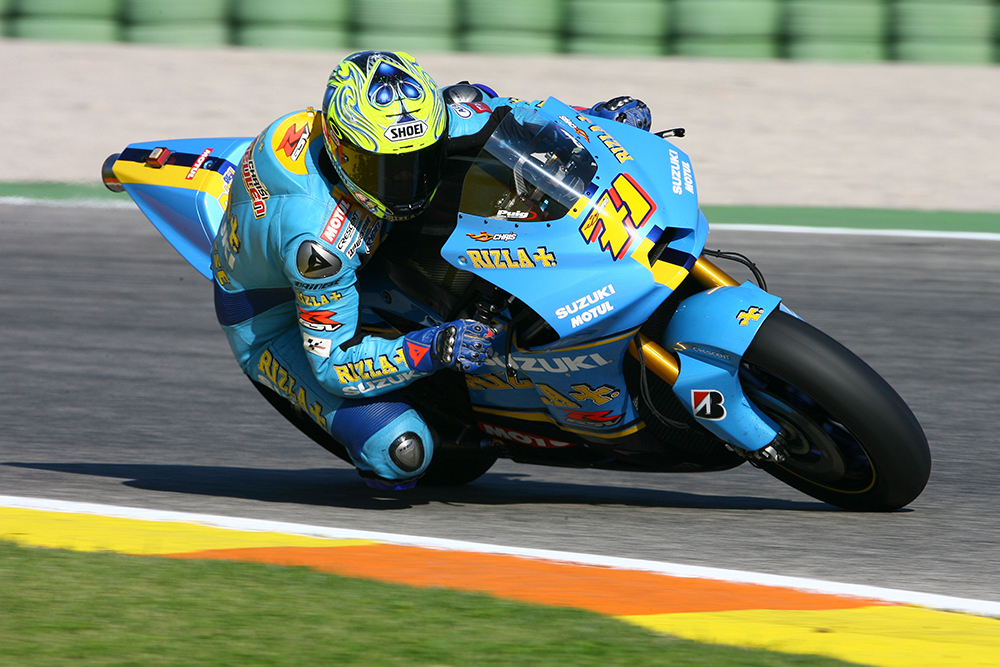 Suzuki exited MotoGP in the wake of the GFC

And then the GFC hit. All over the world profits dived, so much so that Kawasaki and Suzuki shut down their MotoGP projects. By 2011 there were only 14 starters and 10 finishers at some races. MotoGP stood on the edge of the abyss. Dorna, with good reason, hit the panic button.

In these endeavours his main man was Corrado Cecchinelli, Ducati’s former technical director, who was hired by Dorna as MotoGP’s director of technology. The main aims of Ezpeleta and Cecchinelli were to reduce technology and shrink the performance gap between the front and back of the grid. 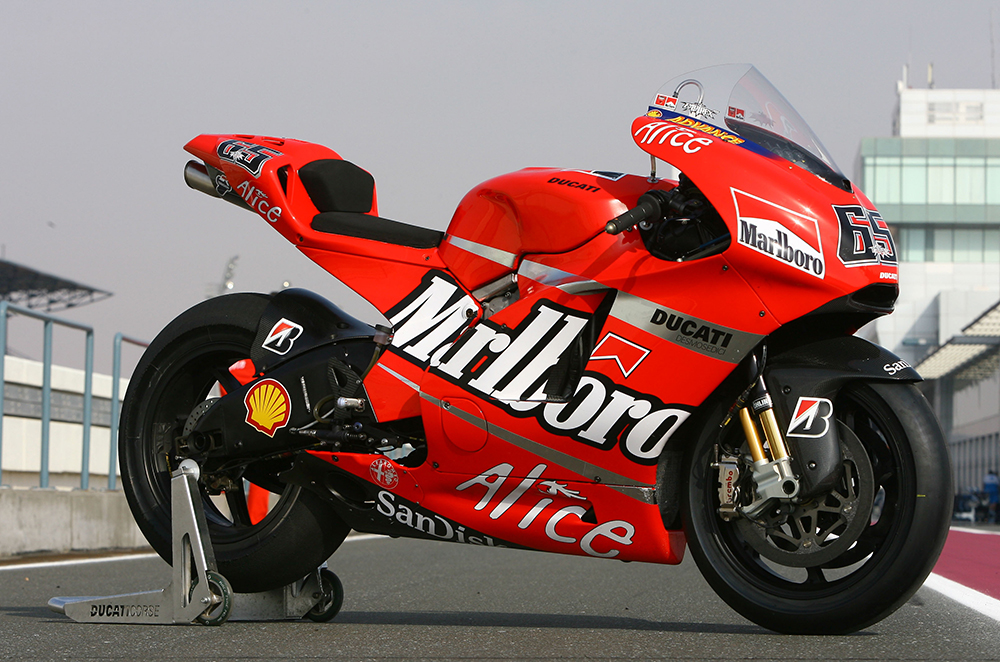 Great ideas, perhaps, but not for the manufacturers. Ducati, Honda, Yamaha and their rivals go racing to promote themselves and develop technology. Ezpeleta not only wanted them to stop working so hard to improve their bikes, he also wanted the entire grid to have bikes as fast as the manufacturers’ treasured factory machines.

On Dorna’s side was teams association IRTA, who also understood the harsh reality. 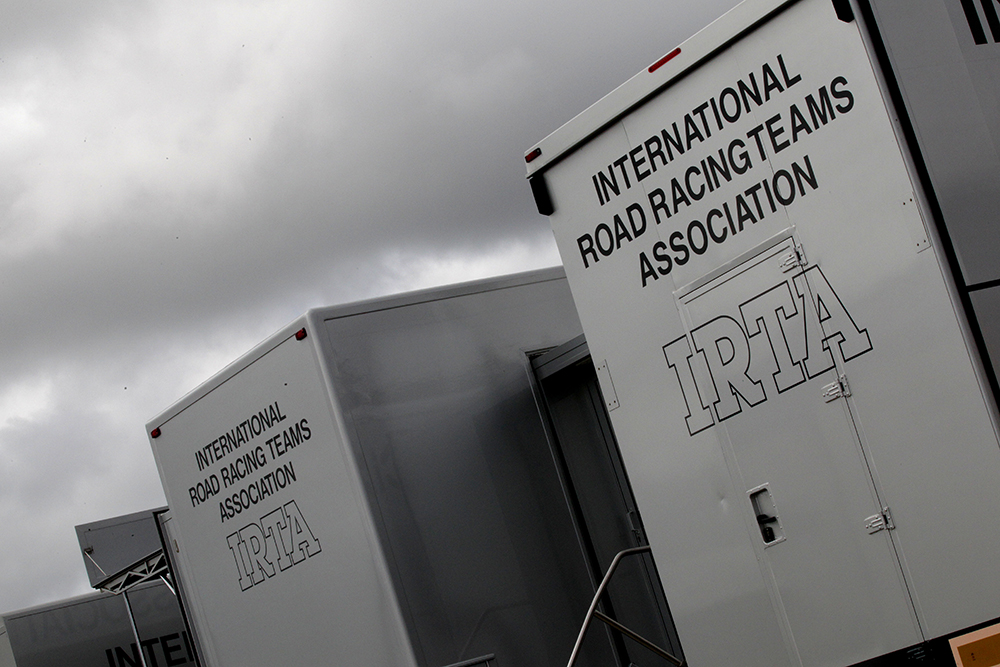 The teams, IRTA, lost some of their power

“We need to understand that GP racing’s time as an engineering laboratory isn’t over, but that role is less important than it was before,” said IRTA president and Tech 3 boss Herve Poncharal at the time. “We are a sport, but sport can only live if there is a show, so this is showbusiness.”

On the factories’ side were engineers like Valentino Rossi’s crew chief Jeremy Burgess, who had spent three decades toiling on GP bikes, from finicky 500cc two-strokes to electronically manipulated MotoGP four-strokes.

“I get very peeved about all the new rules,” said Burgess. “Anyone with a remote amount of intelligence knows that the fewer rules there are, the better things are. I get pissed off that the people making the rules seem to want to do less work and less testing, and are quite happy to put on a pantomime or soap opera at two o’clock every other Sunday. That’s not what I’d call grand prix racing – it’s more like production-based racing.” 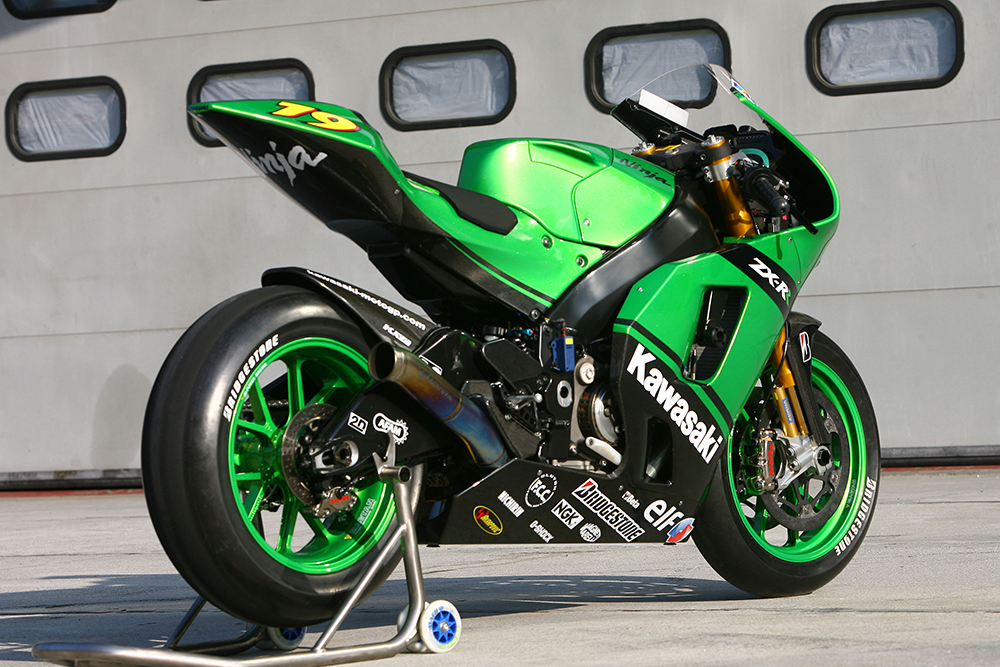 During this battle the riders stood mostly in the middle, collateral damage to the firefight that raged around them. Many riders loudly voiced their opinions but they never had the power of Dorna and the factories.

The first shots of this battle were fired at Misano in September 2007, the 13th race of the opening season of 800cc MotoGP bikes. The problem was that the low-torque, one-line 800s had created horribly processional racing, so that fans were switching off their TVs in the thousands. And fewer viewers meant less income for Dorna and less sponsorship for teams. 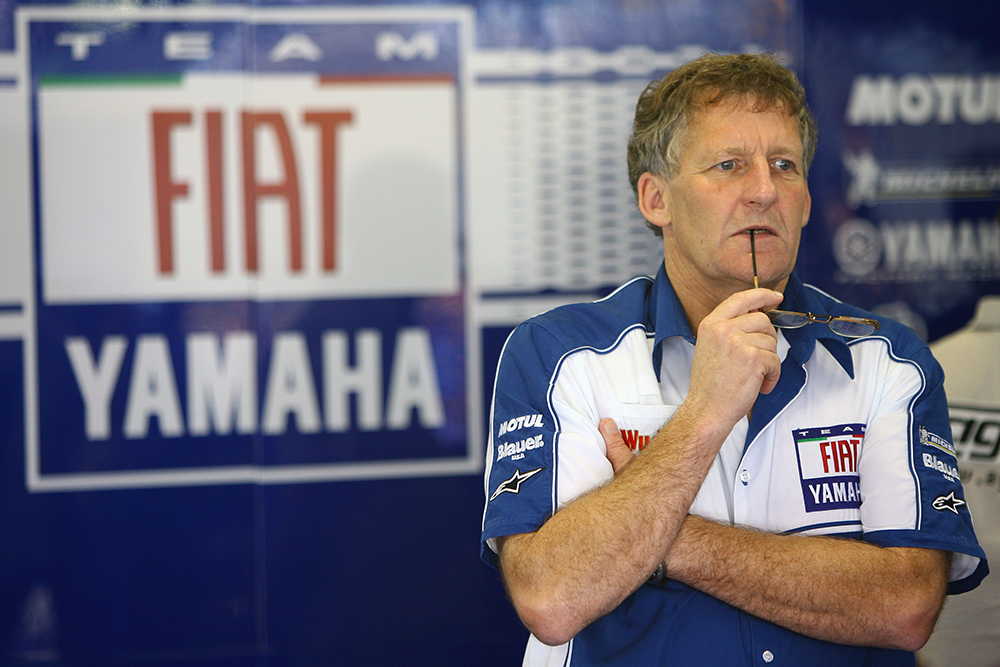 Jeremy Burgess was no fan of MotoGP’s rapidly expanding rulebook

“The championship needs to be competitive, we can’t continue like this,” he said at Misano.

Four-times MotoGP king Valentino Rossi agreed. “This is not the show motorcycle fans deserve,” he said the same weekend. “Our sport is becoming more and more similar to Formula 1.”

The first target in Ezpeleta’s gunsight was tyres. Bridgestone had leapt ahead in the tyre war, leaving Michelin riders struggling to keep up, which only made the racing worse.

His answer? A spec-tyre championship, with all riders using the same tyres. In theory, this should produce closer, more exciting racing. The tyre battle continued for a year, until the 2008 Japanese GP, where Dorna announced that MotoGP would be a spec-tyre championship from 2009. During these months things got very bitter between Dorna, the riders, factories and tyre companies. 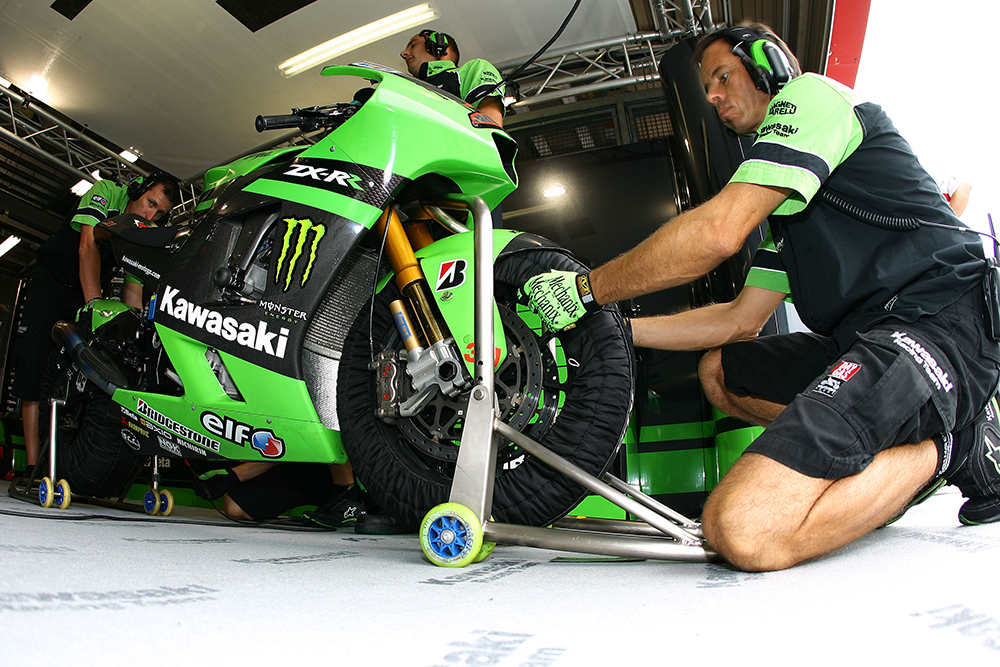 Those against spec tyres considered them a production-racing thing, not for motorcycling’s elite prototype championship, in which open competition between tyre companies had done so much for tyre development.

“I think things should be left the way they are,” said Casey Stoner, who won the 2007 title on his Bridgestone-equipped Ducati.

“This class is about prototypes, it’s not about everyone going out on street bikes, so tyres should be prototypes as well.” 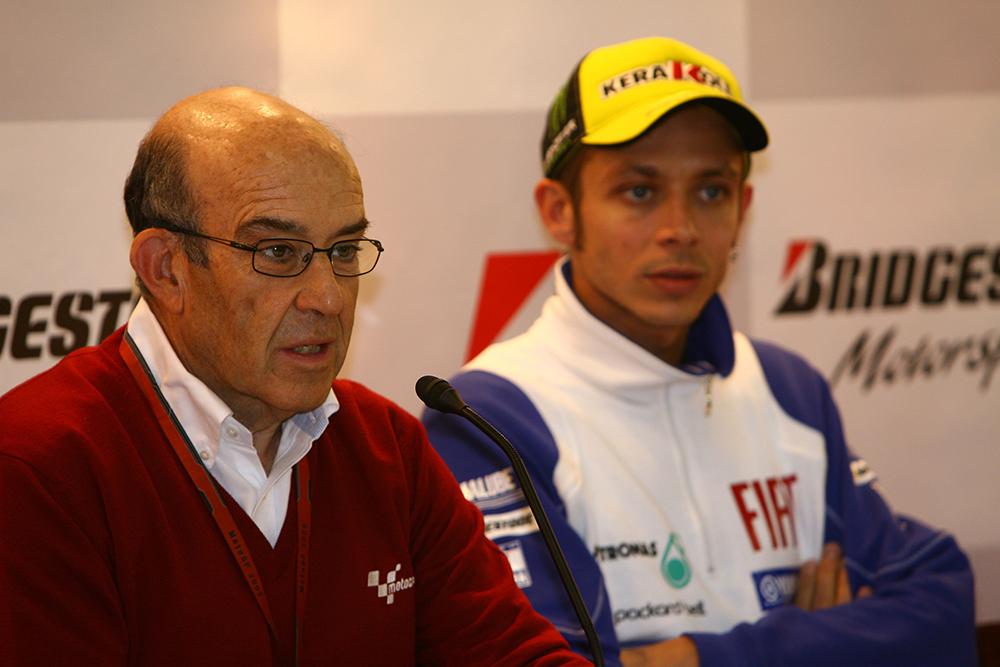 Carmelo Ezpeleta pushed through his agenda

Some riders even changed sides during this skirmish. In 2007 Valentino Rossi’s Yamaha YZR-M1 was equipped with Michelins. Thus Bridgestone were convinced the Italian was one of those agitating for a spec-tyre rule.

“I think the power of Rossi is very strong with Mr Ezpeleta – I believe he is the main reason for this,” fumed Hiroshi Yamada, MotoGP boss at Bridgestone, who gained huge publicity from defeating Michelin and Dunlop.

However, in 2008 Rossi switched to Bridgestone, so when the spec-tyre rule was confirmed he wasn’t happy.

“Sincerely, I’m not in favour,” he said.

Dorna had won the first skirmish of the battle, but there were plenty more to be fought. Over the next few years they got involved in all kinds of fights. Some they lost, most they won. 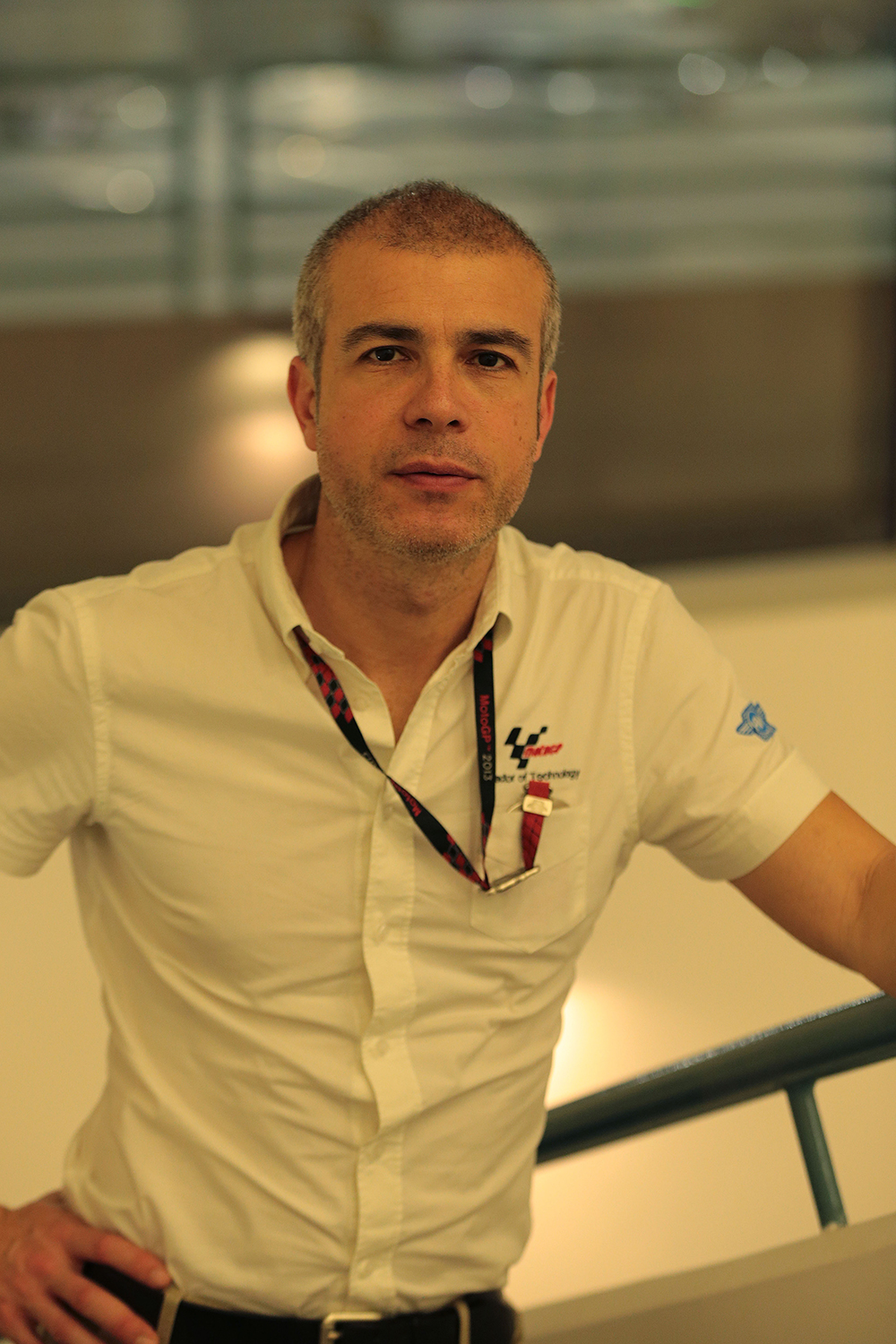 They reduced practice time (from four hours to three) and testing time (from a norm of 25 to 30 days per year to 14 days now). They introduced street-powered MotoGP bikes, increased the minimum weight limit from 148kg to 160 and transformed qualifying from a 60-minute session to a quick-fire, TV-friendly 15-minute outing.

Dorna also advocated an rpm limit, restricting riders to one bike only and banning carbon brakes and ride-by-wire throttles, but these suggestions never made it into the rule book.

The riders and factories mostly disliked these changes, which they considered to be the dumbing down of purebred GP racing. Stoner hated Dorna’s ideas so much that they helped push him into early retirement. 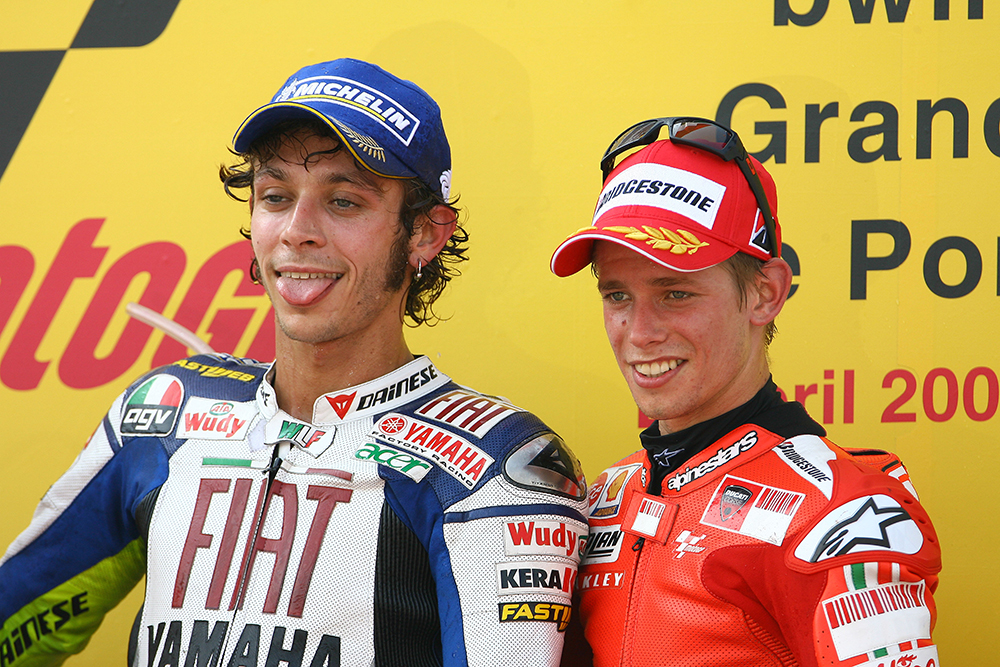 After the spec-tyre skirmish, the two biggest conflicts were fought over the introduction of lower-cost, street engine-powered CRT bikes and spec electronics.

“The cost of leasing MotoGP bikes from the factories is very expensive and doesn’t permit us the chance of having more than 18 or 19 bikes on the grid,” he said. “That’s why we have proposed that independent teams use tuned 1000cc street engines with the objective of having a bigger grid.”

CRT bikes arrived in 2012 and quickly filled the grid, or at least the back of the grid. The machines were mostly built by chassis makers like Suter and FTR and used Aprilia, BMW, Honda and Kawasaki superbike engines. Dorna allowed them more fuel and more engines in an effort to make them competitive. It didn’t work; CRT bikes were so slow that some MotoGP riders claimed they were dangerous. 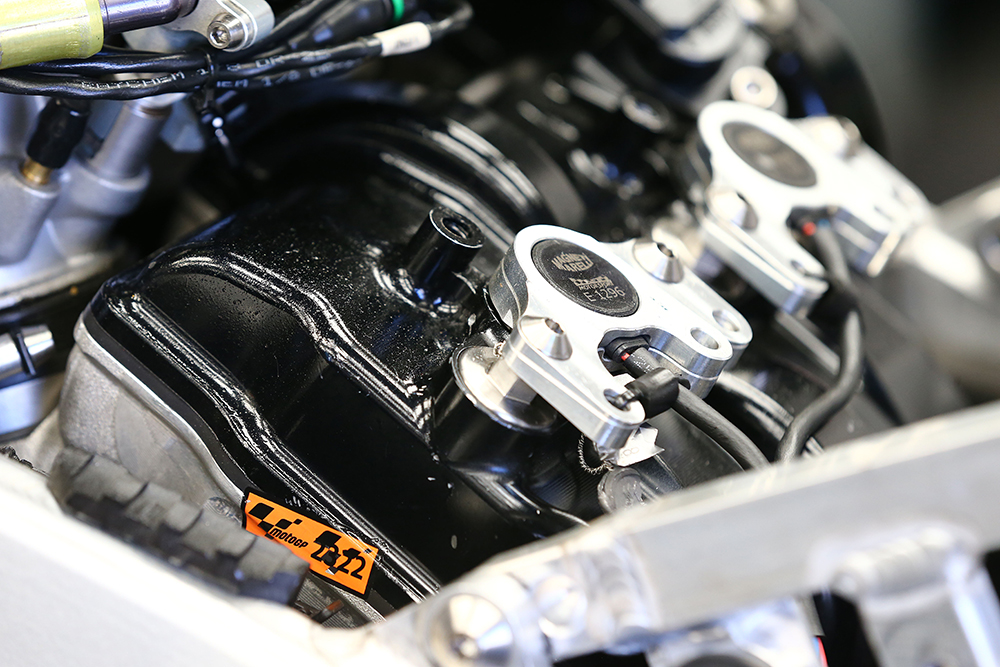 But CRT bikes did their job, which was to keep MotoGP from imploding, while Dorna scrambled around for longer-term solutions.

CRT bikes also gave Ezpeleta a new and very important power. For the first time in decades GP racing didn’t need the factories. This gave him huge leverage when negotiating with the MSMA (the Motorcycle Sports Manufacturers’ Association), because finally he had his own means of filling the grid. Now he could go on the attack.

“Eventually all MotoGP bikes will be CRT bikes,” he said, striking fear into factory bosses who realised that their power of controlling MotoGP through owning all the toys in the game had gone.

Some factory chiefs lashed out, but with little effect. “I think CRT bikes are ridiculous,” said Ducati team manager Livio Suppo. “We are a prototype class; we need prototype engines. Sometimes I think we are a little schizophrenic.” 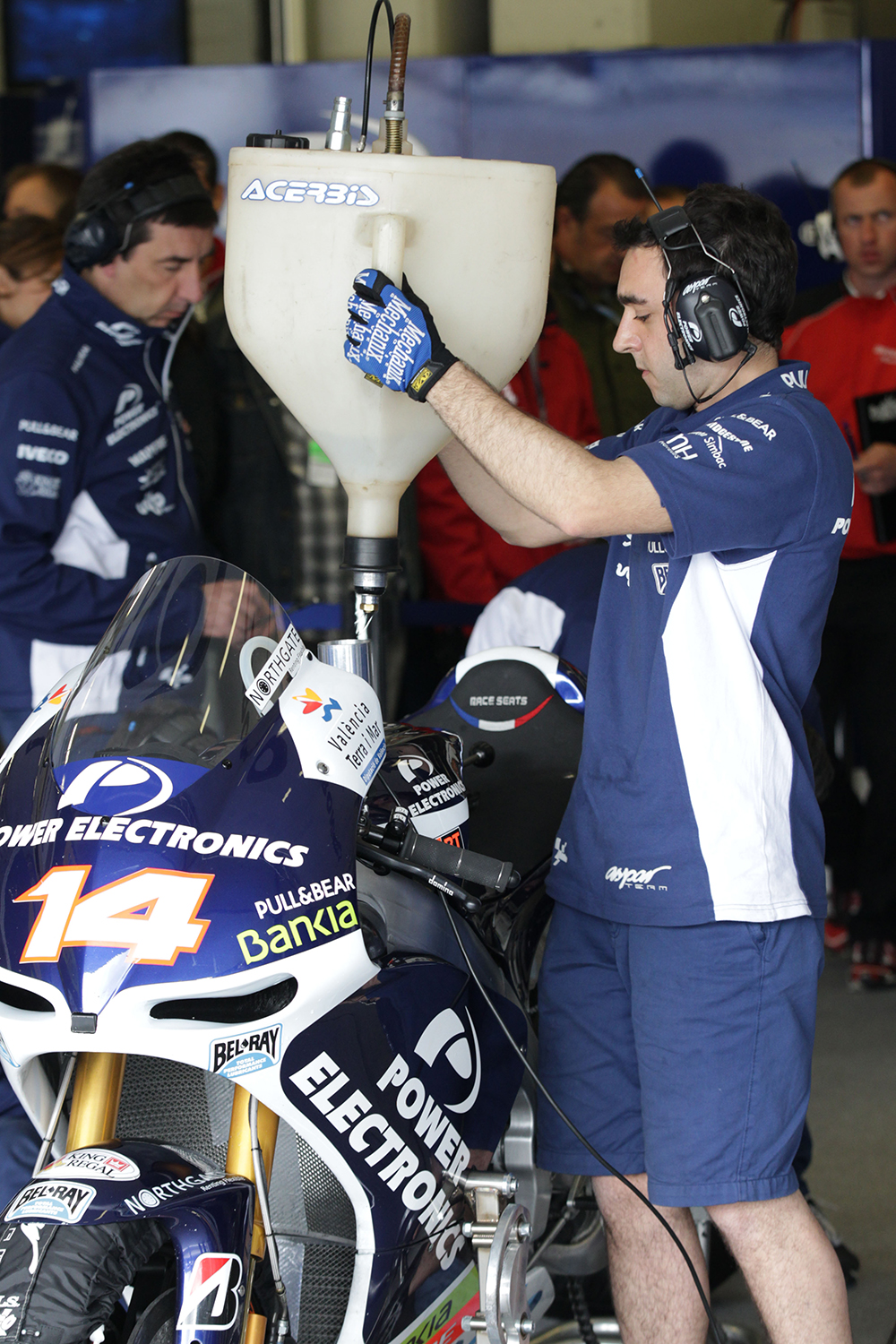 Ezpeleta knew exactly where he wanted to use his new leverage the most; in the biggest fight of them all: electronics.

Most of the riders were with him on this issue. “MotoGP bikes are producing so much horsepower that riding without traction control could be catastrophic – there’d be savage highsides,” said Stoner. “But I think there should be a limit to electronics – a control ECU that determined how much traction control everyone has would be fantastic.”

And this was the plan. To reduce electronics technology to return control to the riders and make the racing more spectacular.

“Right now the bikes are so smooth they look like cars,” said 2006 MotoGP champ Nicky Hayden. “It makes people look at it and go, ‘yeah, I could do that’.”

Rossi agreed. “The problem is that the bikes are now too perfect, so everyone’s rhythm is very constant all through the race, so it’s difficult to do something better than the other guys and overtake,” he said. “I like riding these bikes, but if you want better races we need to have 50 or 60 per cent less power in the [onboard] computer.” 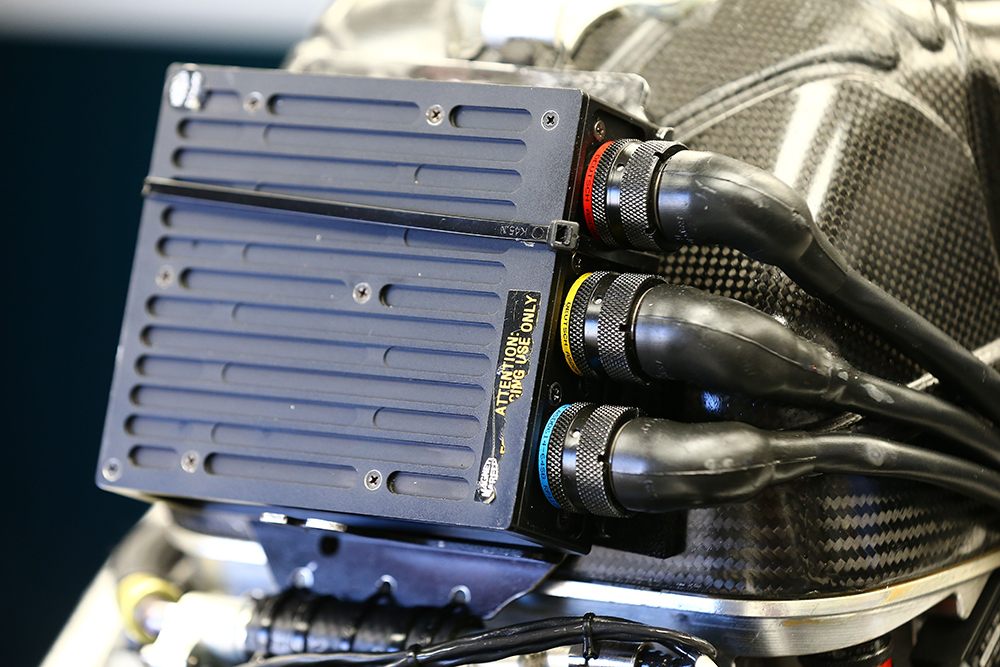 The only people who didn’t want to dumb down MotoGP electronics were the manufacturers. After all, electronics were motorcycling’s biggest technological growth area; so the last thing the factories wanted was their R&D restricted.

Honda put up the biggest fight. At the 2012 Czech GP HRC vice-president Shuhei Nakamoto threatened to quit MotoGP and switch to World Superbikes if Dorna went ahead with their spec-ECU plan.

“If we have a single ECU in MotoGP then Honda’s interest will change to World Superbike; goodbye Carmelo!” sneered Nakamoto. “We must continue spending on electronics development – this is very important to Honda.”

In October 2012 Ezpeleta had another piece of good luck, which gave him even more leverage. Bridgepoint – the private-equity firm that owns Dorna – bought World Superbike, leaving Honda and the others nowhere to run. Thus the factories agreed to run spec electronics hardware from 2014  and spec software from 2016.

However, the factories didn’t lose all their fights with Dorna. During all the horse-trading over spec electronics Dorna dropped the one-bike rule, the rpm limit and other proposals. 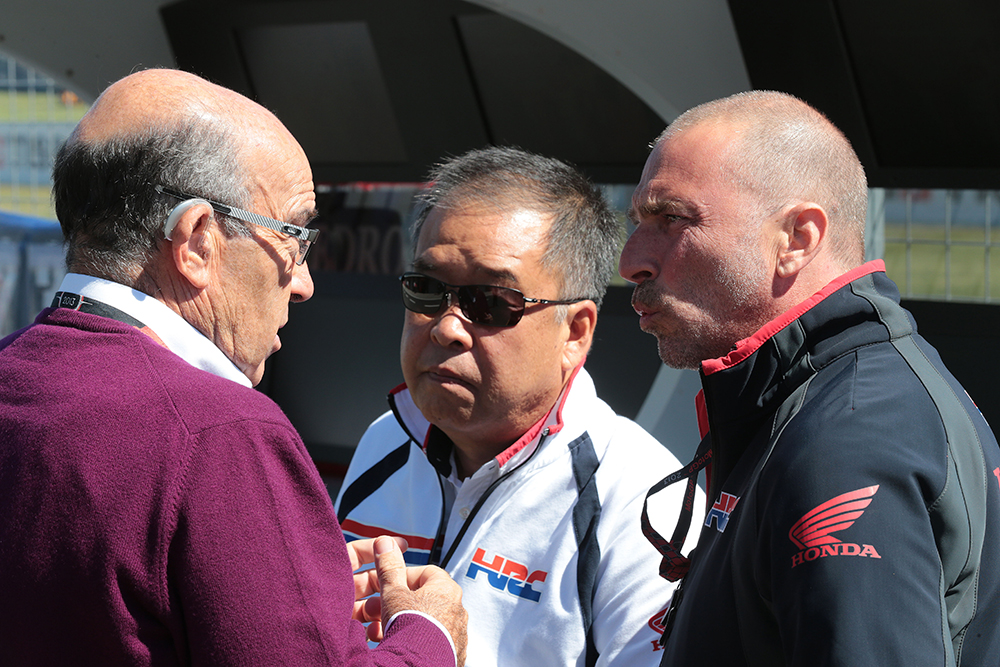 In 2014 CRT bikes were replaced by Open machines; lower-spec machines like Honda’s RCV1000R leased or sold to independent teams. They were faster than CRT bikes, but not much.

When MotoGP’s spec Magneti Marelli software arrived in 2016 (alongside Michelin tyres) the Open bikes disappeared and MotoGP became a single-class category once again. Dorna had won the battle and from this point were mostly involved in mopping-up operations, including banning factory IMUs (inertial platforms) in favour of spec IMUs from 2019 and controlling the new aerodynamics technology race.

The explosion of aerodynamics R&D and development of other mechanical rider aids was provoked by the spec software, which featured lower tech anti-wheelie, launch control, traction control and so on. This should’ve come as no surprise to Dorna, because if you shut one avenue of development you usually open up another. 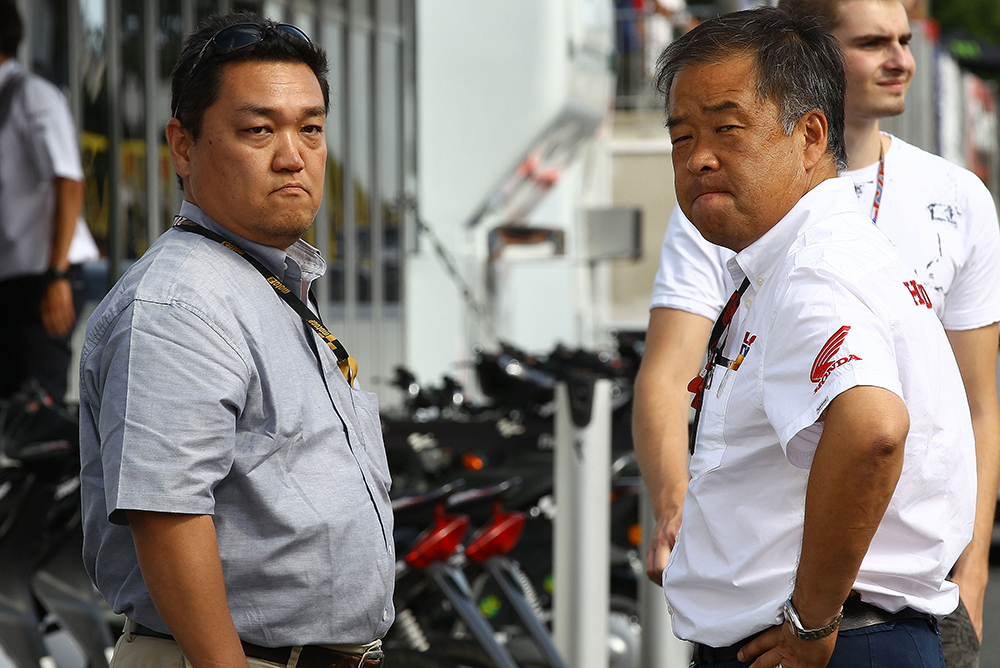 Dorna worked so hard to control aerodynamic development costs that the aero chapter in the rule book expanded from 47 lines in 2015 to 166 lines in 2020.

Ezpeleta’s next big thing – which followed the lead of Formula 1 cars – was expanding the calendar and further shrinking the testing schedule.

The argument was the same old, same old: why go testing to develop motorcycles, because that costs money, when you can stage more entertainment shows, which generates income? Between 2005 and 2018 the championship numbered 17 or 18 races. In 2019 it expanded to 19 races and in 2020 to 20 – reduced to 15 because of COVID. With more to come…

These are the major cost-saving changes introduced from 2008

Only two ratios for each gear and two primary-drive gears

All bikes must use official MotoGP hardware/software

Only one aero update per rider

All bikes must use official MotoGP IMU 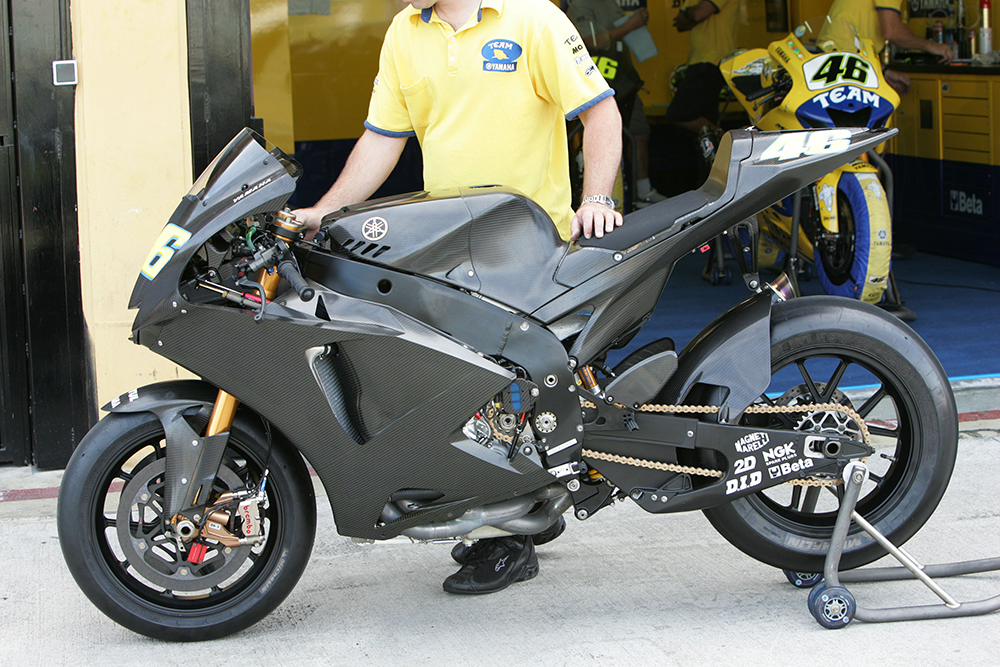