The trends were confirmed at Le Mans. One of those is that the weather generally plays a big part here – this time rain muddled qualifying, and a cold track complicated race day. Another is that Marc Marquez is currently in a class of his own.

What they added up to was a masterful pole position followed by another masterful win.

It was his third this year, the 73rd in his career. And a landmark 300th in the premier class for Honda.

It was rather more exciting than his runaway wins in Argentina and Jerez, because this time the Repsol Honda didn’t lead every lap. But it was no less masterful.

The rider who got in front, for laps five and six, was not one of his usual title rivals, but relative rookie Jack Miller. The Pramac Ducati rider, on the same GP19 as the factory squad, was mightily impressive, too. But by the end his tactics fell marginally short, and he finished a close fourth, with factory teamsters Andrea Dovizioso and Danilo Petrucci narrowly ahead. But Miller did manage to hold of Valentino Rossi, on a day that his more fancied Monster Yamaha team-mate Maverick Vinales compounded his poor qualifying position with a bad start, and then an early end after being knocked off in the melee among the lower orders. For Marquez, his second Le Mans win in a row was not as easy as it eventually looked. “Le Mans is always difficult with the temperature … I think this was my first race with a soft front tyre.” (Not quite true, according to Michelin … although his first win on one since 2016). This led to fears that it might overheat, especially if he spent too long close behind Miller, so he quickly got back to the front.

His escape was slow at first, by a couple of tenths a lap. This prompted him to risk the tyre by pushing hard: his best lap was his 11th, and by the 12th the gap had stretched to more than a second. Five laps later he had doubled it. And effectively the job was done.

By now the pursuit had changed slightly.

For the first two laps Petrucci had been second, but ran wide a couple of times and dropped to fifth. Miller had taken over, pushing Marquez hard but worried he was using too much tyre. “I tried to get in front of Marc to slow the pace a bit … but he got back ahead in a couple of laps, and then he could chip away by a tenth every lap.”

By now Andrea Dovizioso (Mission Winnow Ducati) had come through after finishing the first lap seventh, passing fast-starting Rossi for third on lap four and dragging him up to Miller’s back wheel. Rossi was losing touch slightly when the recovering Petrucci caught and passed him just before half distance. “It was a difficult race,” Rossi said later. “I was losing too much in the straight and acceleration from the slow corners.” The bike was good to ride, but just too slow … a worry for the season to come, he agreed.

At the same time, Miller let Dovi pass, thinking he might have the pace to drag them both up to Marquez, only to be disappointed. But nor could he retake the position, and he was powerless to resist when an aggressive Petrucci caught them both, took third on lap 20, and demonstrated a clear lack of Ducati team orders with sustained pressure on Dovizioso, with the older rider steadfastly resisted.

By the finish, Rossi had closed up again, second to fourth covered by just over one second.

The 27-lap 112.995-km race had started after a strange and (for both riders) inexplicable) crash on the warm-up lap. Reale Avintia Ducati’s Karel Abraham and Joan Mir (Ecstar Suzuki) fell independently but within yards of one another at the first sharp left-hander. Both restarted on their spare bikes, but Abraham was out fractionally after the leader had passed the pit-lane exit, and was black-flagged.

In the coolth, all but one rider had chosen Michelin’s soft tyres front and rear. The exception was Takaaki Nakagami (LCR Honda), with a medium front. He crashed out, spoiling a run of top-ten finishes. There was close racing behind the top five, with Pol Espargaro claiming KTM’s best dry-weather result in sixth. It was a storming ride by the Spaniard, way ahead of the other KTMs, taking the benefit of an all-new carbon-fibre swinging arm. At one point he even looked like threatening Rossi, and he was less than three seconds behind the Yamaha at the end.

He had gradually outpaced satellite Petronas Yamaha rider Franco Morbidelli; but it was the second Petronas rider who rewarded the record home crowd with an excellent ride. A bad first lap left new fast Frenchman Fabio Quartararo down in 15th, but he set fastest lap of the race as he forged through to an eventual eighth.

Cal Crutchlow (LCR Honda) had spoiled his chances by missing out on Q2 because of the rain. Fifteenth on the grid, he was up to eighth by lap eight, but was consigned to ninth at the end by the charging Quartararo.

Alex Rins (Ecstar Suzuki) completed the top ten. He too had ruined his chances by missing out in qualifying, starting from 19th, and picking through gradually. His last victim had been Jorge Lorenzo (Repsol Honda), who had spent most of the race dropping gradually away behind Crutchlow, before Quartararo swept past, and a little later Rins as well.

Aleix Espargaro (Aprilia) was a lone 12th, after pulling clear of Zarco’s KTM; the off-key Frenchman barely two seconds ahead of Red Bull satellite-teamsters Hafizh Syahrin and Miguel Oliveira, who had changed places on the last lap.

With Mir 16th, a lap down, there were points for all the rest.

Maverick Vinales (Monster Yamaha) was one of the big losers. A bad start saw him circulating in 14th, until he was knocked down and out by Pecco Bagnaia (Pramac Ducati) on only the eighth lap, after he had slowed suddenly to avoid a collision with the elder Espargaro. A second no-score dealt a heavy blow to his dwindling title hopes. Iannone and Rabat both retired. 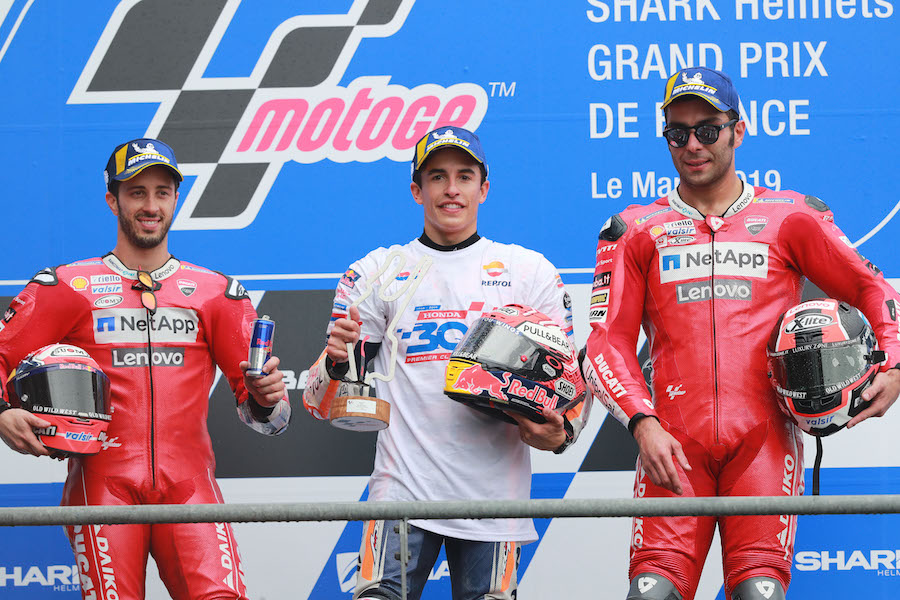 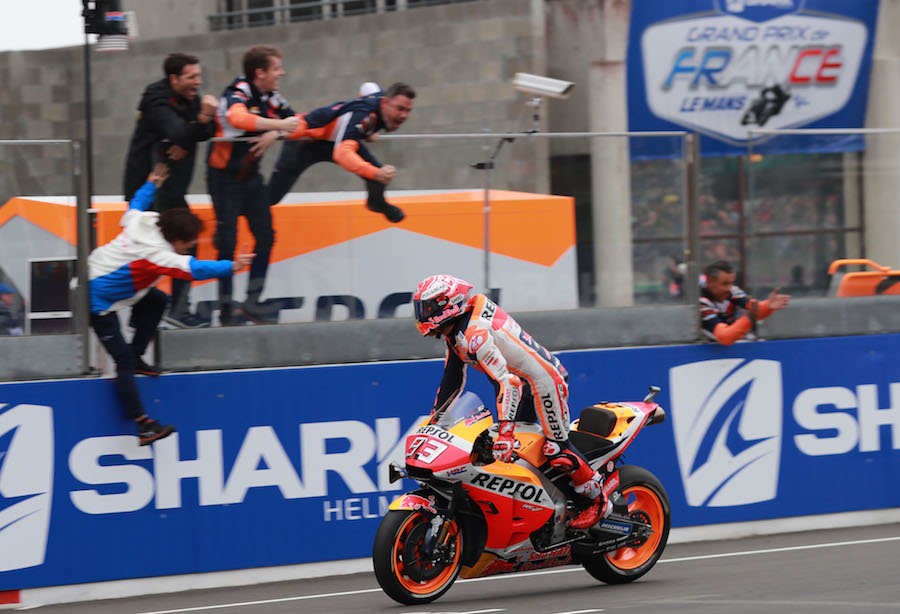 Alex Marquez took his EG-VDS Kalex to a copybook first win since 2017, stamping authority on a race that saw championship leader Lorenzo Baldassarri (Flexbox HP40 Kalex) stretchered off with concussion and a dislocated shoulder after crashing out of fifth place on only the second lap.

The weather had been marginally less disruptive in qualifying for the smaller class, with Jorge Navarro (Speed Up) on a second successive pole, from Thomas Luthi (Dynavolt Kalex) and Marquez, with regular substitute rider Mattia Pasini (Petronas Kalex heading row two. Brad Binder (Red Bull KTM) was the first non-Kalex thereafter in eighth; while Remy Gardner (ONEXOX Kalex) – fastest in morning warm-up – was 12th, at the far end of row four.

Luthi led away from Marquez and team-mate Xavi Vierge, with Navarro in hot pursuit ahead of Baldassari. But on lap two Baldassarri high-sided, and fell under the wheels of Pasini, who ran over him before also crashing.

Up front, Luthi was soon in trouble, and on lap three Marquez scythed past easily. Vierge followed him through directly, and the Swiss veteran would continue to drop back.

Not so Italian veteran Simone Corsi (Tasca Racing), who had started down in 18th, but was up to tenth already by the end of lap one.

On the sixth he was third, and promptly displaced Vierge to start putting the pressure on Marquez. But it all went wrong into the tight lefts at the end of lap ten, as he lost the front and slithered to a furious conclusion.

Navarro did close on Marquez over the next few laps, then an error let Fernandez ahead briefly. From then on Marquez was unmolested as the pair scrapped over second, changing places several times.

On the last lap Navarro got clear and set a new lap record, but was still over a second adrift of Marquez at the flag. Fernandez was close for an all-Spanish podium.

By the end, a battle for fourth was four second away, with Binder taking it off Vierge with two laps to go.

Gardner might have been with this group, but had lost the front and slipped off on lap 14.

Another two seconds away, Luthi managed to hold off rookie Enea Bastianini (Italtrans Kalex), who had taken second Dynavolt rider Marcel Schrotter on the last lap. Iker Lecuona (American Racing) was still close, but erstwhile companion Nicolo Bulega (SKY VR46 Kalex) was six seconds adrift in tenth, after leaving the party with a dramatic high-speed run across the gravel with seven laps to go.

Second American Racing rider Joe Roberts, the only US rider in any class, claimed his first points of the season in strong ride, finishing 14th after a long battle with 13th-placed former winner Luca Marini (SKY VR46 Kalex). The pair had caught Dominique Aegerter’s MV Agusta at the end, but the Swiss rider suddenly slowed on the last lap, out of fuel.

Stefano Manzi (MV Agusta) was another 20 seconds down for the final point.

Sam Lowes (Federal Oils Kalex) was an early crasher, fighting to make up for a dire 26th-place start. The first race did not disappoint in its usual serving of thrills and variety. It started with a terrifying first-lap crash, when Ai Ogura had a vicious high-side on the Team Asia Honda, the bike spinning back onto the track in the middle of the pack, miraculously avoided by the rear half of the 29-strong field.

The pack was split by various other crashes and incidents, but closed right up again for a fraught final lap – with Scotsman John McPhee at the front of it at the end. He had been also at the beginning, but had to fight to regain the position, as second-placed Lorenzo Dalla Porto pushed his Leopard Honda briefly ahead of the Petronas Honda.

The top ten were all over the line inside two seconds, with the inevitable moments of contacts through the tight corners.

Third-placed Aron Canet (Sterilgarda KTM) got the best of it, after colliding and ending the hopes of rookie Kaito Toba (Honda Team Asia), who had come through to challenge for the lead in a remarkable rider from an earlier 12th.

Argentine GP winner Jaume Masia (Bester KTM) came through from 23th on the grid to cross the line eighth, setting fastest lap in the process. But a 2.2-second penalty for exceeding track limits dropped him to 12th.

There were only 17 finishers after many crashes – two notable victims being long-time leader Tatsuki Suzuki (SIC58 Honda) and Tony Arbolino (Snipers Honda), after the first-named fell under Arbolino’s front wheels shortly after half-distance.

Canet extended his points lead on 74, Dalla Porta moved to second on 50, with Jerez winner Antonelli on 57, after crashing out today. Toba has 51, Masia 49.