Victorian Kim Krebs has been chasing land-speed records for the last 16 years. We sit down with Australia’s fastest woman

Australian-, American- and world-record holder for land speed on a sit-on motorcycle, Kim Krebs, was planning on testing herself and her machines on the ‘big white dyno’ of Lake Gairdner in the coming days.

However, heavy rain in South Australia has forced the cancellation of the Dry Lakes Racers Australia (DLRA) annual Speed Week event, which was to be held on the famous salt lake between 28 February to 4 March.

“There’s just too much water on the lake, the roads are not passable now, and we shouldn’t put that landscape under pressure with 1000 vehicles,” Krebs tells AMCN.

“Even if the lake dried out, the damage we could do would be unforgivable.” 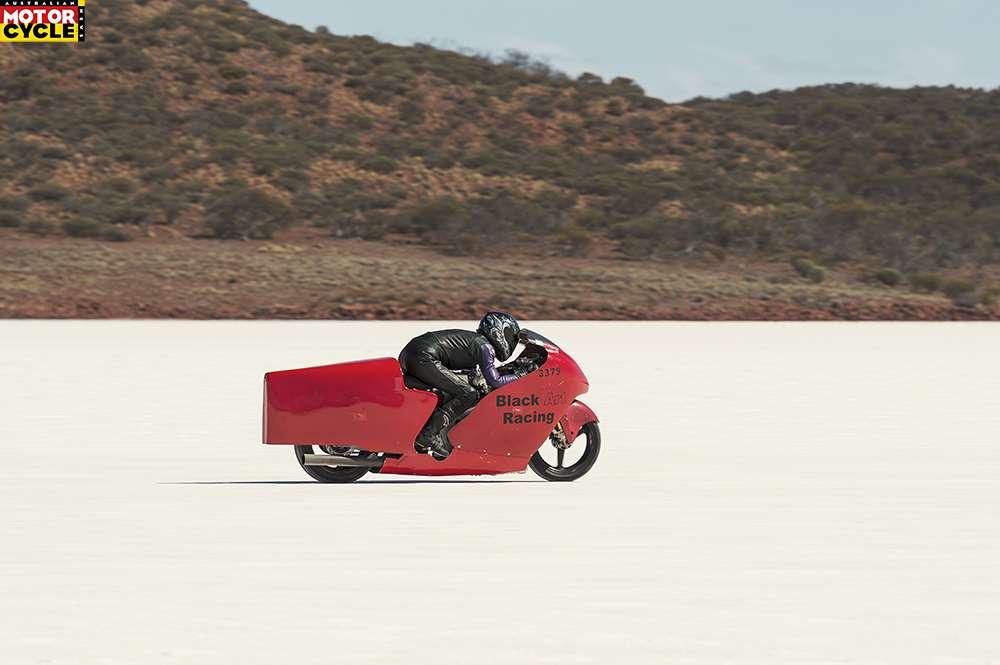 Such disappointments go with the speed racing territory, requiring huge amounts of patience, as Krebs explains.

“We only get a few chances a year, we have to travel around the world to find those chances, and sometimes nature steps in and takes the event away from us,” she says. “It rains and the lake is flooded. The wind picks up and makes it too dangerous. Your bike finds a salt gremlin and stops working, even though it was perfect yesterday.”

Indeed, Speed Week was also cancelled in 2020, this time due to our old mate Covid-19. The 2021 event did go ahead, albeit with some weather issues.

“This time nature was in charge,” Krebs says. “Because we ride fast bikes with a lot of bodywork, we’re very susceptible to cross winds, so for the first two days of racing, we had to sit it out, waiting for the wind to drop down.” 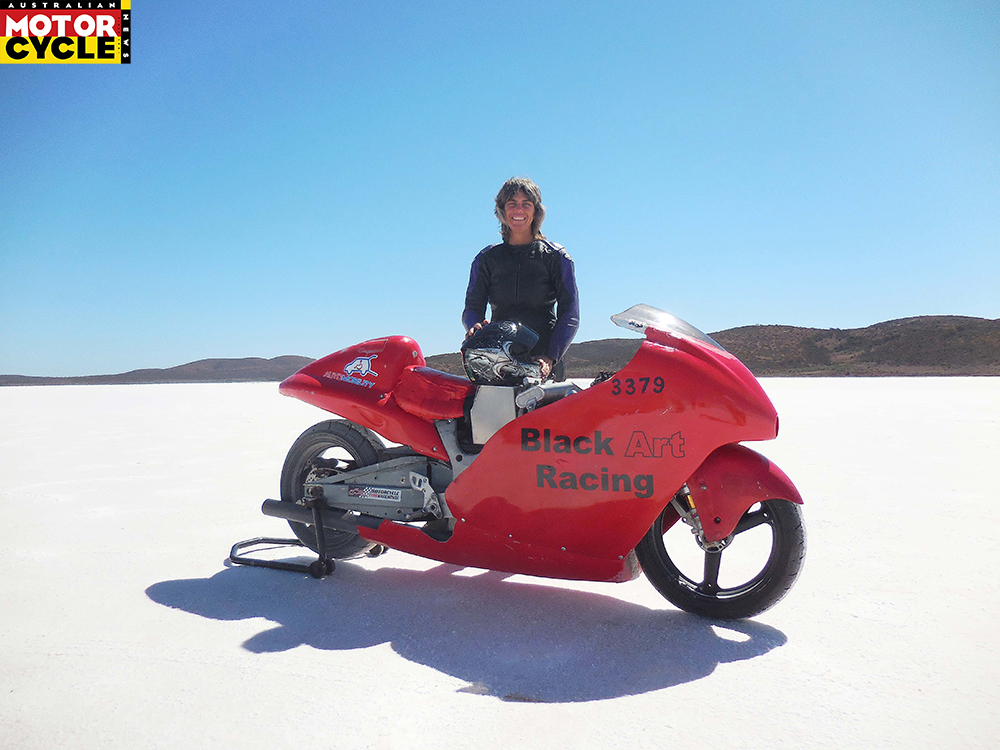 Kim Krebs and her Suzuki GSX-R750

That’s the kind of caution you need to take when you are travelling 350km/h-plus down a track that’s only 30m wide.

“A gust of wind can push you off the track before you know it,” Krebs says. “Then on day three it started to rain, and rain, and rain. The four-mile track was under 15cm of water and the 10-mile track had miles of standing water.”

It was just another challenge for Krebs, who is one of only a handful of females who choose to race motorcycles on salt lakes.

“Not many women compete, so already I’m in rare air,” she says. “But the terrific thing about land speed racing is that there are no men’s and women’s classes. You are all on the same level salt flat. Top speeds are only based on engine size, fuel type and aerodynamics. Competitors are competing against themselves ahead of each other.” 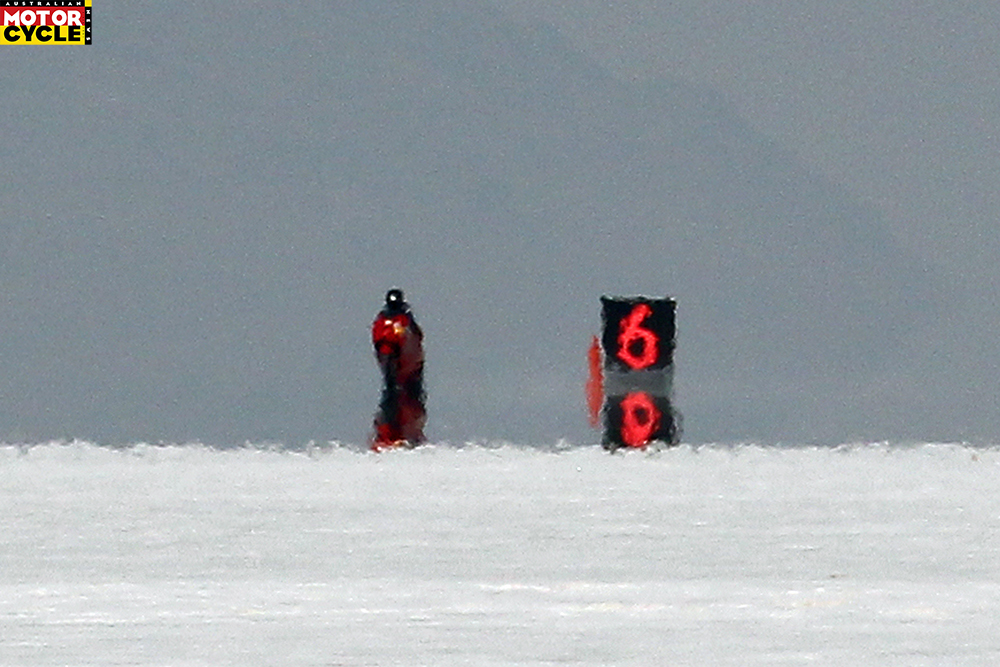 All tucked in at well north of 300km/h

Perhaps of most importance in the land speed racing world, Krebs says, is being an active member of a team.

“Being one of the people who pulls the bike apart, puts it back together and races it like it’s stolen, is how you earn the respect of fellow racers,” she says. 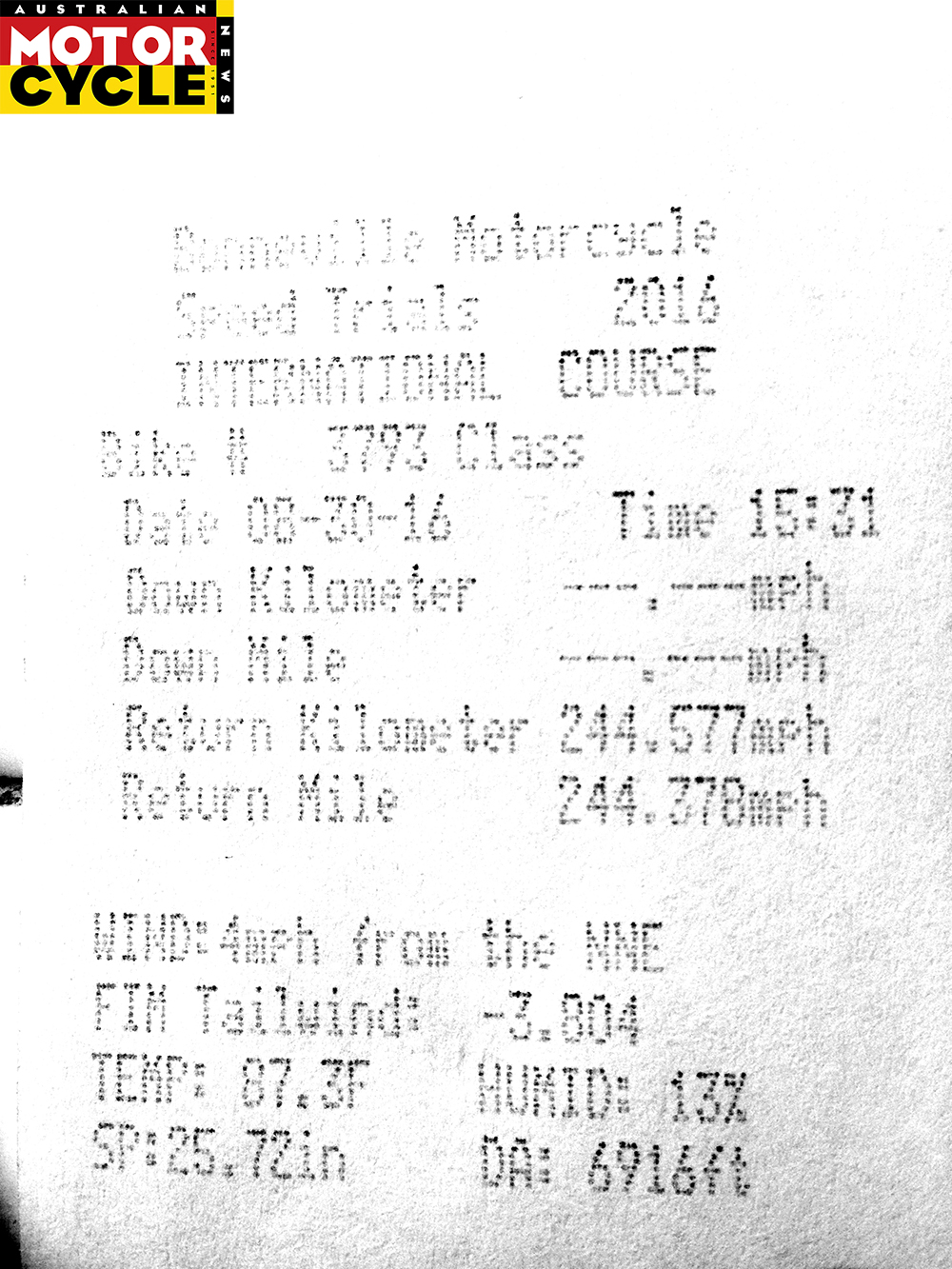 “But all records are only ever borrowed,” she says, “and someone will come along and bump them. That’s racing.”

Krebs even set an American Motorcyclist Association record and FIM record at separate events, but with the same average top speed.

“Try and do that twice,” she laughs. “It’s hard enough to do it once!” 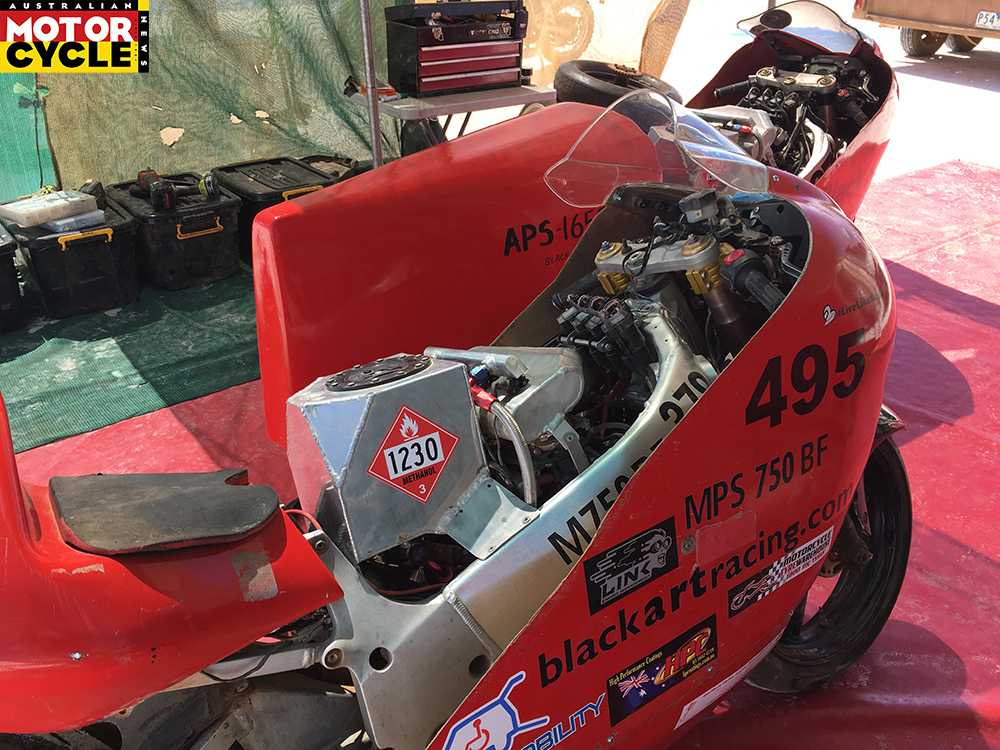 With runs only lasting a few minutes, you do not need a big fuel tank

In 2019, when DLRA started doing the return (double) run – to set an Australian land speed record and to make it equivalent to American and world records – Krebs managed to bump the Australian 750 record to 213mph (342.7km/h).

“Our speeds in Australia are always around 30mph (50km/h) slower than the USA because we’re at sea level here, and we are racing at more than 1600m above sea level in the USA,” she says. “For turbocharged bikes, thinner air means faster.”

So, what is it about this difficult and dangerous pursuit that appeals to Krebs? She says it’s all about seeing what you’re capable of achieving. 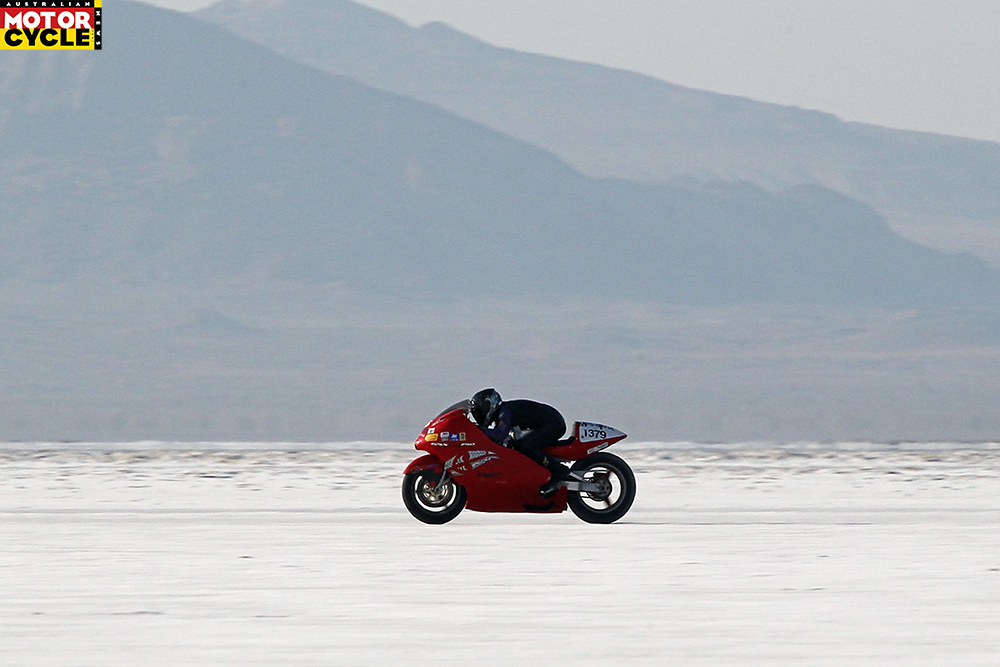 It’s all a far cry from her early motorcycling days, riding in the dirt at the age of five.

“My uncle was servicing the monkey-bike fleet from a travelling circus,” she recalls. “He turned his back as my cousins and I took them into the back paddock to discover motorcycles.”

This led to a lifelong love of bikes, and the way Krebs describes her passion is sure to resonate with most motorcyclists.

“You’re sitting astride an internal-combustion engine, the most amazing invention ever. You’re outside, experiencing everything that the world has thrown in front of you. And you’re in control. Doesn’t matter how fast or slow, how experienced or novice. It’s just you, the machine, and the outside world.

“For me, it’s the way that riding keeps you in the here and now. It lets you connect with the road, the way it twists and turns. The way the road surface changes, from rough to smooth, to bumpy to silky. The temperature changes as you ride past a creek, the sun on your back. The sound of the engine. Riding is a full experience, and that nourishes my soul.” 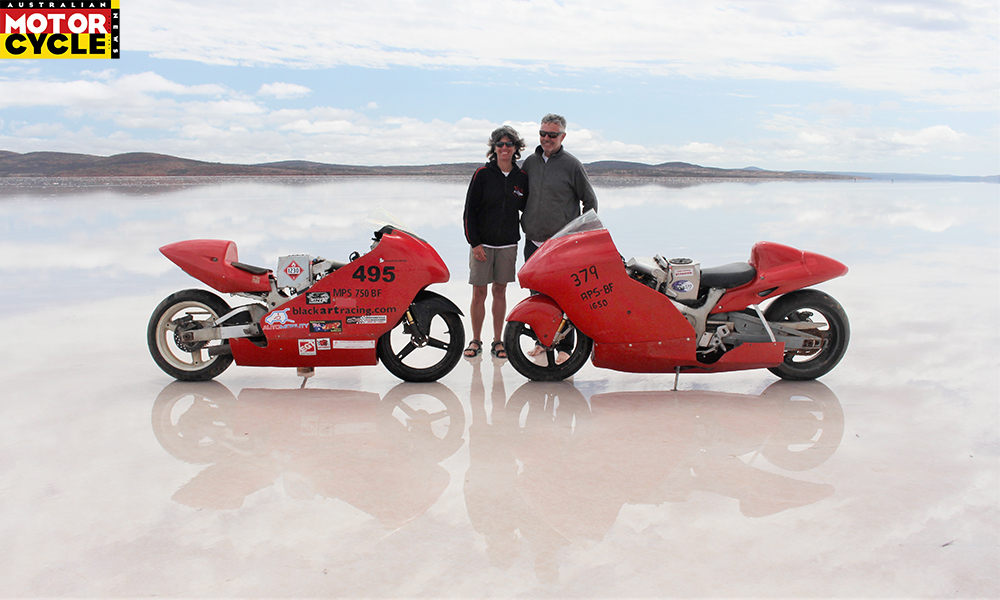 Eventually, Krebs took this passion a few steps further by taking part in university racing track days and historic road racing. Then she met Australian land speed racer Greg Watters, and the two of them cooked up a plan to get her into his sport.

“I am lucky enough to have teamed up with my race partners [Watters and Jim Higgins], and that lets me walk among amazing people,” she says.

Krebs started riding on Lake Bonneville in the USA, then Lake Gairdner. In 2009, Kim became Australia’s fastest woman on a motorcycle, achieving 188.41mph (303.21km/h) at Lake Gairdner on a turbocharged Suzuki GSX-R750. Even these days her team’s land-speed racing bikes are two GSX-R750s, two Hayabusas and a GSX-R600.

“All our bikes are late-1990s models,” she explains. “They remain affordable and within our personal budget. Parts are accessible and manipulatable, and wreckers still have plenty of parts. Greg is an exceptionally talented mechanical engineer. Actually, he’s a farmer, so that’s what really explains his ingenuity.” 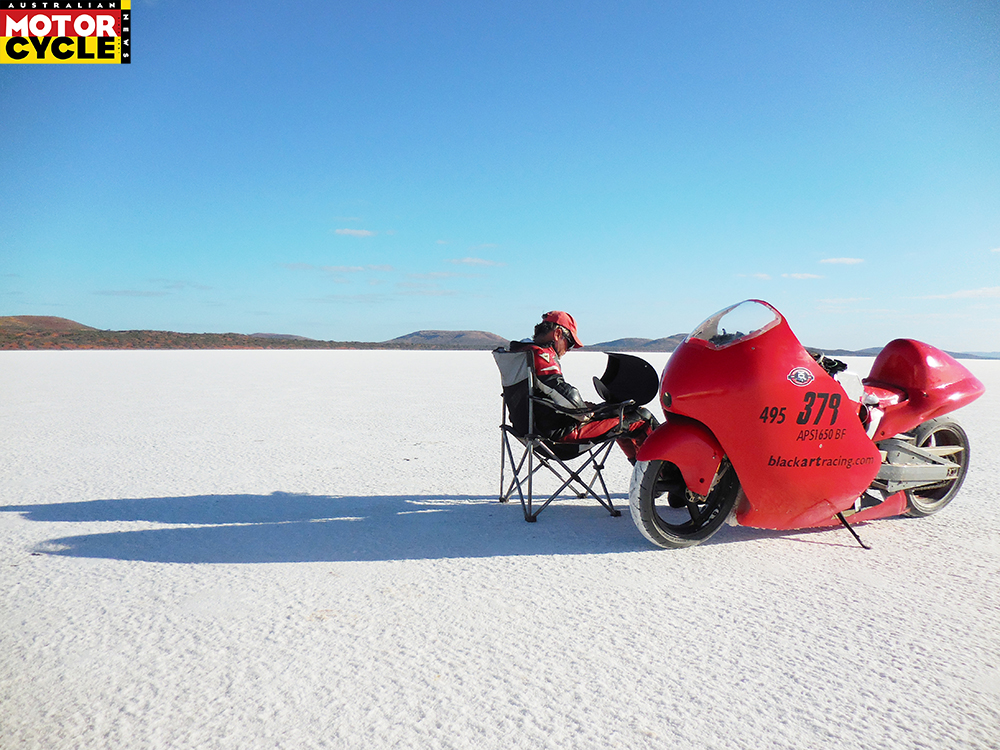 Despite the disappointing start to 2022, Krebs still plans to chase records in the USA this year.

“Now that international travel is back on the agenda, Greg and I are planning to join Jim for our annual land-speed racing season at Bonneville in August-September,” she says.

“Jim, who lives in the back of the Bay area of San Francisco, was able to enter the 2021 Bonneville Motorcycle Speed Trials (BMST), but used it more for testing and tuning the bikes. That said, he did manage a 190mph (305.7km/h) complete rear tyre disintegration, with no explanation. We’re investigating why the tyre evaporated into oblivion, to avoid facing that risk again.

“All going well, we’ll head to Utah to enter Speed Week and BMST. The first event is to test and tune, and the BMST event is where we can chase our American and world records.” 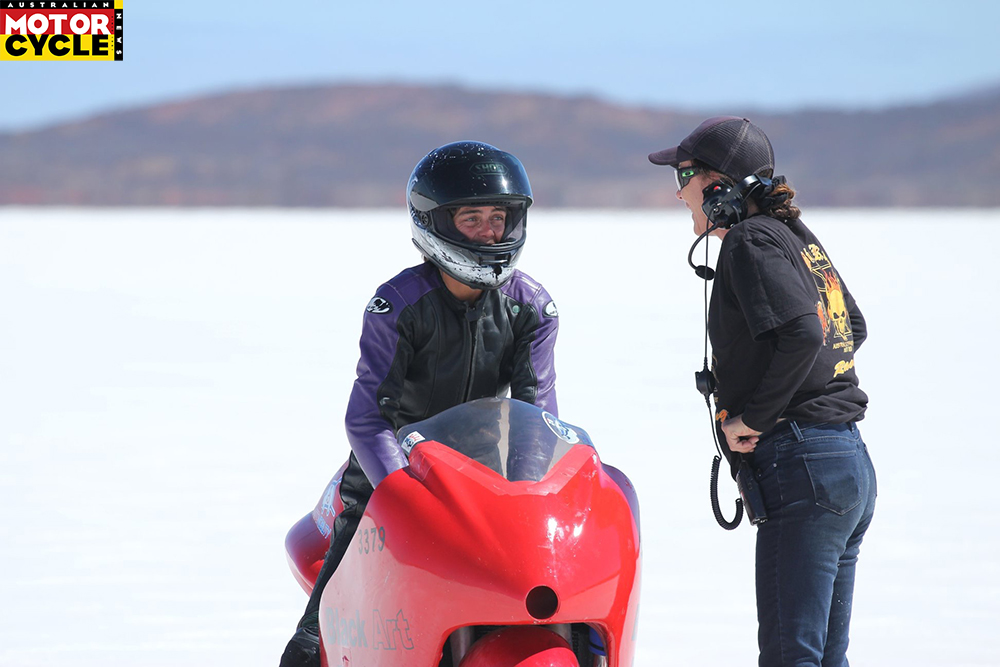 Beyond that, Krebs says that she, Greg and Jim dream of being able to race their bikes on the salt flats of Salar de Uyuni in Bolivia.

“It’s a logistics nightmare with a price tag that’s even scarier, so we’ll have to keep planning and wait for the financial capacity to eventuate,” she says. “We’re talking needing about $100,000, which is way out of our budget. We are a team of three people who build, race, break – then build again – everything, and we’re funded by our own full-time jobs, so it’s a real barrier for us.”

Even so, Krebs might just turn up in Bolivia in July, when former GP-champion Max Biaggi hopes to set an electric-bike record and Al Lamb plans to chase the outright record on a bike (299mph [481km/h] on a sit-on bike, set by Ralph Hudson in 2017).

“Greg’s hoping to head over to Bolivia to volunteer with running the event,” Krebs says. “I’m hoping to do the same, but sometimes you need a job to keep the racing habit alive.” 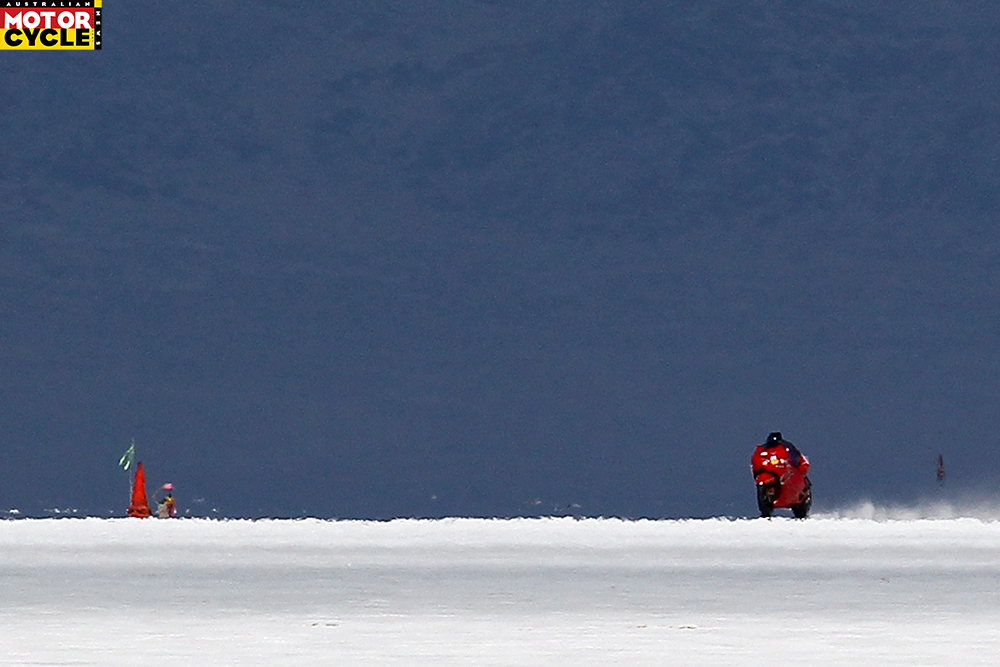 One thing for certain is, after the disappointment of washed-out Speed Week, Krebs and her team will redouble their efforts to get to Bonneville in August. “It’s been a long time between wild rides,” she grins. 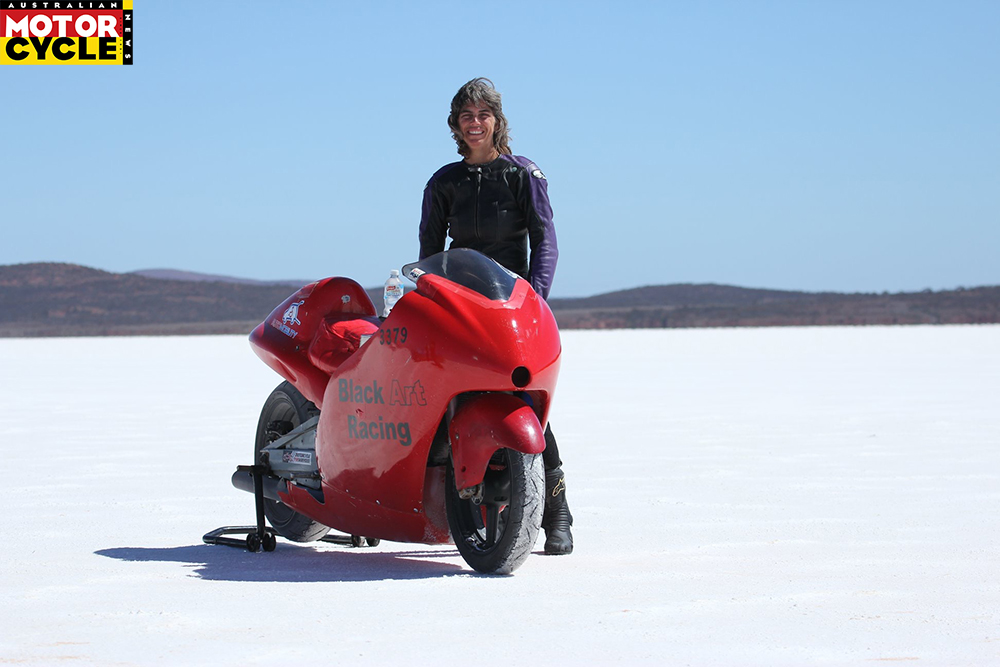 Krebs will be US-bound later this year

Triumph’s all new Thruxton R is now available in Aussie showrooms. Chris Dobie went along to the official Australian launch to find out just what percentage of this good looking bike is Cafe and what percentage is Racer.