In the 1950s, the Isle of Man TT was the event in world racing and motorcyclists dreamt of riding there. In 1956, Ken Kavanagh let a whole nation dream along with him

“Few races in TT history have started so tamely and finished in so dramatic a fashion as did the 1956 Junior. The winner, after a ride of brilliant consistency, was Ken Kavanagh of Australia, on an Italian Moto Guzzi machine.” That’s how leading British weekly The Motor Cycle opened its report on the 350 TT 60 years ago. The publication was read avidly in Australia and local enthusiasts knew it was the first Australian TT victory, after almost half a century of trying.

The drama came from the weather conditions on 4 June and the contest building as the seven-lap race progressed. It was almost the upside down TT. Wet roads at the start and the Guzzi team’s decision to start its four entries with 24kg of fuel to run 425km distance non-stop meant lap speeds steadily increased.

The last lap began with Kavanagh on the fully streamlined Guzzi single a bare 0.6 of a second behind John Surtees on the MV Augusta four. The 32-year-old Melbournian and the 22-year-old English ‘wunderkind’ were racing head-to-head on time, but with starting numbers 11 and 72 were 10 minutes apart on the road.

However, expectations of a tense finish were then ruined when Surtees ran out of fuel as he climbed the Mountain for the last time. His machine had been under-filled at his scheduled pit stop. A spectator gave him some petrol and he crossed the line fifth, only to be excluded from results for refuelling outside the pits. Kavanagh set fastest lap of the race on his last lap and won by four and a half minutes from AJS factory rider Derek Ennett, a native of the Isle of Man. Norton’s John Hartle was a further two and a half minutes behind in third place, just 0.2s ahead of Cecil Sandford in his first ride on the three-cylinder, two-stroke West German DKW.

Some spectators might have been excused for thinking about a beer after five laps, with Guzzi’s 1955 world champion Bill Lomas 54 seconds ahead of Surtees, having led from the start. But during that lap riders and some spectators had to contend with heavy rain showers at Kirk Michael and Kate’s Cottage, and a hailstorm at the Bungalow.

And then, on lap six, Lomas’ race ended on the Mountain when his engine expired with a dropped valve. A strip down revealed the inlet valve and collets had gone through the alloy valve spring cap. It later emerged that the Guzzi mechanics had found problems with two of the four Guzzi 350s during their pre-race checks and had fitted steel spring caps to those machines. Lomas had stipulated that engine be left untouched after practice.

Britain’s other weekly, Motor Cycling, in its report from the winner’s enclosure said: “Ken Kavanagh, diminutive and swarthy one-time engineer from Melbourne, now resident in Bergamo, Italy, was quietly delighted at his success … This year his luck changed and he deservedly joined the ranks of TT winners, a status to which his riding skill had long entitled him … He ‘didn’t start racing’ in the earlier part of the race, adding that ‘anyone is welcome to stick his neck out when the roads are wet’. He was surprised that his fourth lap was the fastest in the race with the exception of his final circuit when, he declared, he was really trying. On the sixth lap, before he knew of the need to press on regardless, he actually stopped in the village of Ballaugh to turn off his chain oiler when, after jumping the bridge, he experienced a severe slide. Apart from that incident, his only other unpleasant experience was passing through the localised hailstorm on the Mountain during the fifth lap.”
At the prize giving, “Ken Kavanagh insisted that his team manager, Ing Carcano, should come forward to take the trophy. Then, with a wink to the crowd, Ken pocketed the cheque. He was, he said, very proud to be the first Australian to win a trophy. ‘After all, it is a race and not a high-speed reliability trial.’ ”

Sixty years on, Kavanagh said: “I led the TT several times, but it’s a bloody long race and the bikes always broke. I tried to treat them gently. This time, the Guzzi kept going and the others broke. I treated it gently, didn’t over rev.”

In his view, the MV was the best bike in the race, but the Guzzis were set up to do the race non-stop, while Surtees would need to refuel. 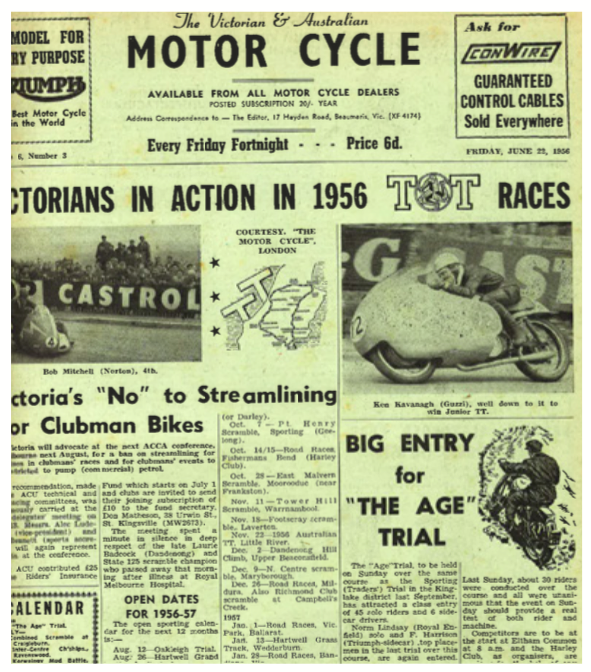 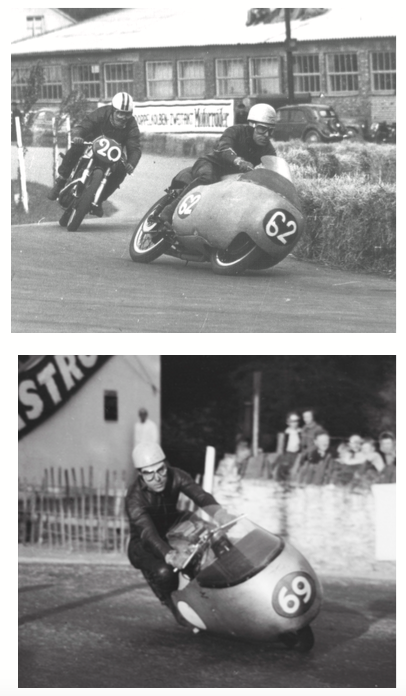 Thomas Kenrick Kavanagh’s path to motorcycle racing success was certainly colourful. He would usually begin the story by telling interviewers how as a teenager he was thrown out of home when he accepted an apprenticeship at the Sampson brothers’ shop. In 1951 he sailed to England as member of Australia’s official three-rider Isle of Man team. He had reckoned he was only an outside choice to join Harry Hinton Snr and Tony McAlpine in the team, because Victoria’s number one Maurie Quincey declined the nomination and Sydney’s Ernie Ring had strong claims to the third spot.

However, Kavanagh made the cut, and soon made his selection look inspired. Within months of joining the Continental Circus, he had finished on the podium in the Dutch TT and been drafted into the Norton works team. He went on to achieve a string of breakthroughs for Australian riders: first to record a European GP double, first to win a world championship GP and then 500 GP, first to ride for two factories, first to ride for an Italian factory, first to finish on the TT podium and first to win in the Island.

The 1956 TT was Kavanagh’s fifth and last world championship race victory, with wins in Northern Ireland (twice on different circuits), Belgium, the Netherlands and IoM. New Zealand’s Rod Coleman pipped Kavanagh to the honour of the first Antipodean to win a TT, by capturing the 1954 350 TT on a works three-valve AJS.

The TT was always Kavanagh’s goal. The world championships had only existed for two years when he arrived in Britain.

On June 4 it was 60 years ago exactly since Kavanagh’s historic win. So raise a glass to Ken – on his wife’s orders, he’s off wine.