IN THE TRACKS OF BURKE AND WILLS

Will Peverill also failed to reach the Gulf, though he lived to tell the tale

The captain of the Queensland Motor Cycle Club had little difficulty in convincing Will Peverill that planning to ride his motorcycle from Brisbane to the Gulf of Carpentaria was an utterly unsound notion. It was nearing the end of Summer 1912, temperatures north of the Tropic of Capricorn were consistently above 39ºC and the humidity was bloody impossible. The creeks were flooded; the tracks impassable. And, after ‘the wet’, homesteads would have no spare petrol. Then came the clincher; ‘remember what happened to Burke and Wills?’

That aside, he intended to be the first motorcyclist to make a transcontinental crossing of Australia from Melbourne to Normanton. Peverill’s choice of motorcycle was a belt-driven Peerless, powered by 3.5hp German-built Fafnir. The journey north to Brisbane had taken its toll and he knew his return journey would take more than a week. But no one was willing to guess as to how long it might take to reach the Gulf of Carpentaria, let alone return.

Far better to head home to the bosom of his family and rightfully claim the intercity record. At that time, no motorised vehicle had completed the journey between Sydney and Brisbane and there was no need to compound the risks involved by pushing further north.

You can imagine the size of the crowd gathered to witness Peverill being flagged away from Brisbane GPO mid afternoon on 20 March. But despite the intense heat, Peverill motored easily west to Grandchester before sunset. That was the effortless section.

Then, even though Peverill ascended the moderate gradients of the Toowoomba rail line, it took an entire day for the underpowered machine to reach the Garden City. There he was dismayed that late summer rains had turned the fertile Darling Downs into an expanse of black muck that clogged the wheels and mudguards, rendering the Fafnir’s leather belt drive totally ineffective. 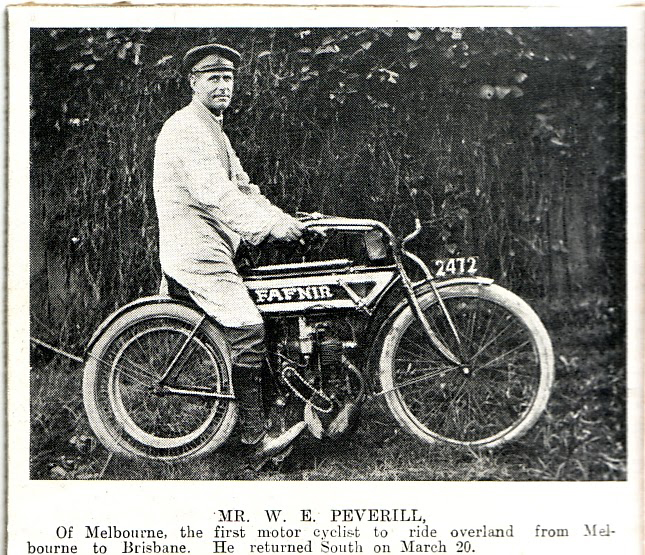 Peverill persevered but torrential rain caught him out and, after pushing his machine for two hours back to the rail line, he set off along the tracks for Warwick. The rain continued to slow progress, though by linking sandy farm tracks and cattle pads where, on occasion the cattle took exception to his presence, Peverill eventually made it to Murrurundi.

Now, almost a month after leaving home, the novelty was wearing thin. He decided to make a big push for Sydney – almost 400 kilometres distant.

Leaving at dawn he made good time and, like the legions of motorcyclists who would follow, was thoroughly enjoying the magnificent scenery along the Putty Road, despite the Fafnir having but a single rear friction-block brake. It was here he suffered his first puncture. He’d purchased a spare valve but on opening the tin found he’d been shafted. In Peverill’s words the replacement “must have been a family heirloom and utterly useless except as a provoker of bad language”. He did however manage to bush engineer a repair and, now in pouring rain, bypassed Sydney to overnight in Liverpool.

From there, the route to Melbourne was well established though the actual road was little more than a sequence of muddy farm tracks or, dependent on the weather, bulldust holes linked by rocky creek crossings. Victoria was in the grip of a late summer drought, the roads had bulldust a foot deep for miles on end, conditions which Peverill described as the “vilest” roads he’d seen.

He arrived in Melbourne before sunset, his journey later certified by Mr B. Glass as the first motorcyclist to ride between Brisbane and Melbourne. The 3600-mile (5793km) round trip also set an Australasian record for a single motorcycle ride. Clearly there was no need for Peverill to regret his decision not to penetrate the Gulf Savannah.

These experiences stood Peverill well when he volunteered for the Australian Imperial Forces as a despatch rider in November of that year. He needed very little training and survived WW1, as next we learn he was commanding the motorcycle section of Melbourne’s Traffic Control Branch.

The latest arrival in the DIABLO™ tyre family, the direct descendant of the renowned and highly rated DIABLO ROSSO™ II,