As exclusive as a Rolex watch and just as expensive. Kushitani leathers are a top shelf product few of us will ever own

To the astute observer, motorcycle racing equipment – helmets, leathers, boots and gloves – changed little for decades. When the full-face helmet arrived, it quickly became de riguer, but the rest of the gear was slower to respond.

In the case of the leather suit, the change was even less perceptible – more padding here and there, slight styling updates and so on. But one factor influenced what would become a complete rethink in racing leathers, and that was tyres.

In the old days, crashes were generally of the ‘slip off and slide’ type, hopefully without hitting anything, which was the greatest fear for riders. But the combination of increasingly powerful two-strokes and tyres that struggled to keep pace brought about a new form of crash – the dreaded high side. Getting pitched over the top meant that compression injury from impact, not abrasion, became the main concern, and manufacturers of leather suits began to seek ways to minimise those injuries, which meant completely abandoning traditional thinking.

One of the first companies, if not the first, to respond to this challenge was Kushitani, a company established in Japan’s Hamamatsu in 1947. Toshiko Kushitani’s original business was a modest shop that he ran with his wife, which sold fashion leather garments for men and women, with the emphasis on the highest quality hide and original designs. There was no thought of getting into other markets, but in Hamamatsu, things were changing.

In earlier times, the city had been home to a large textile industry, with many factories devoted to fabric production and garment manufacture. Post-war, however, a new industry quickly evolved, thanks in large part to local engineer Soichiro Honda, founder of the Honda Motor Company. Hamamatsu soon became the heart of the Japanese motorcycle industry, with Suzuki and Yamaha, plus numerous smaller marques, joining in.

This expanding business included lots of test riders, who began to look for riding gear more styled to their needs, and Kushitani’s little shop became a frequent haunt. Soon, Kushitani was churning out leather jackets for the testers, as well as for the fledging local motorcycle racing scene, which was initially confined to an annual event at Mount Asama. 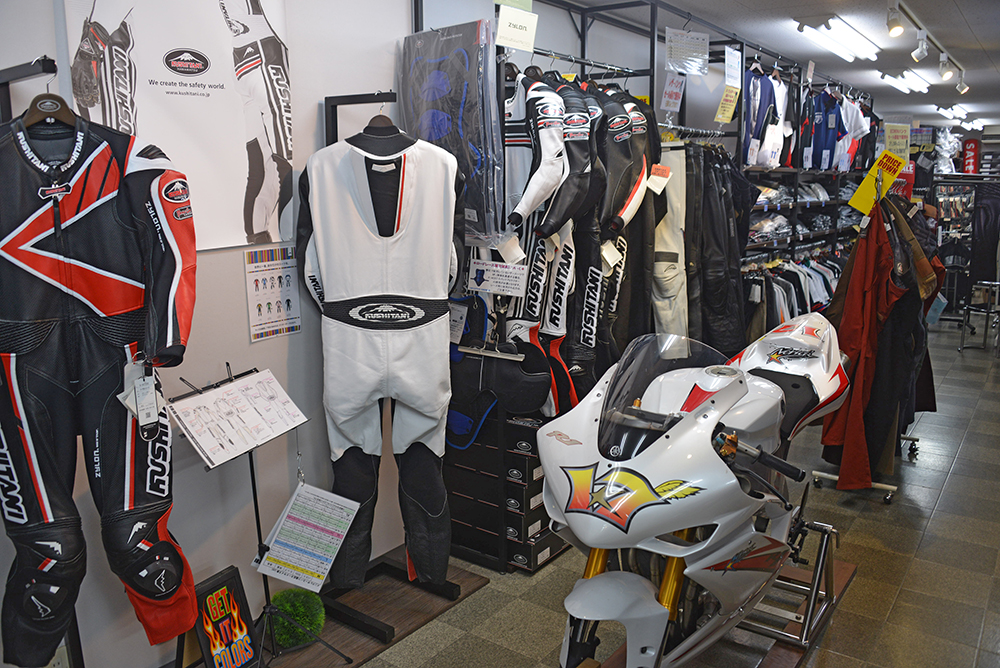 As Suzuki and Yamaha followed Honda into big-time racing, the demand for competition apparel in Japan rapidly increased, with the early suits fashioned after the traditional British garment produced by Lewis Leathers in London.

It was not until 1968 however, that Kushitani decided to offer its motorcycle gear to the public, rather than supplying directly to the motorcycle manufacturers for their exclusive use. Kushitani’s wife looked after the design side, while he ran the day-to-day business.

By this stage, motocross was big business in Japan, and Kushitani was one of the first companies (along with Halvarsson in Sweden), to incorporate a form of knee protection in their MX pants – a plastic insert in a zippered pouch that did much to reduce the most common injury in that sport. The same thinking was soon applied to its road-racing suits, initially also as a form of knee protection.

But as tyre grip continued to increase exponentially, a development of the knee pad came on stream – the knee slider. At first, this was little more than crude abrasive-resistant material stitched to the knee area to avoid wearing away the leather itself, but the arrival of Velcro – the ‘zipperless zipper’ invented by Swiss engineer George de Mestral – revolutionised the process, allowing high-density plastic pads to be replaced as they wore out, without damaging the suit itself.

In this area, Kushitani was a pioneer, and as specialised synthetic materials became more widely available and sophisticated, so Kushitani incorporated them in their suits, in the shoulders, elbows and in the spinal region.

The racing side of the Kushitani business was still a locally-focused operation until the success of Takazumi Katayama, who won Japan’s first World Championship, the 1977 350cc title, wearing a Kushitani suit. It was probably Wayne Gardner that familiarised the name Kushitani on the Australian scene, although Graeme Crosby had used the product in his racing career until 1982.

As the Grand Prix racing boom exploded onto our television screens in the 1980s, the Kushitani logo, with its distinctive representation of Mount Fuji, became instantly recognisable on the shoulders of Gardner’s racing leathers, and soon many others, including Kevin Magee, Randy Mamola and Kevin Schwantz were doing likewise. 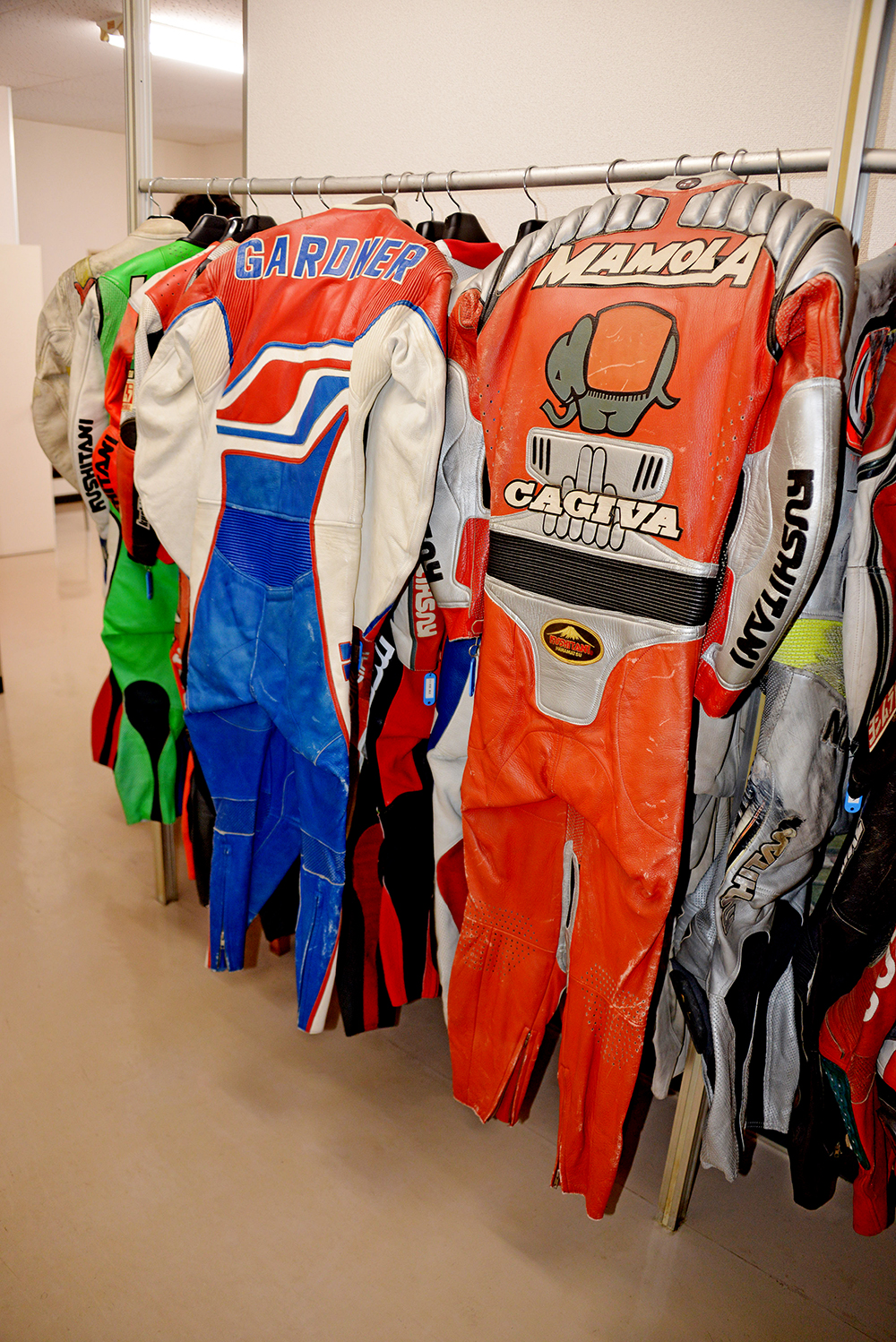 The leather used comes from cattle specially bred in Japan for Kushitani to produce Holstein leather, which is noted for its strength as well as its smoothness and soft texture – the skin of one and a half cows goes into a typical leather suit. Different parts of the animal’s skin are used for various areas of the suit – for example, the softer leather goes under arms and knees (or in gloves) or areas that are not required to be so abrasion-resistant.

Kushitani also developed K-Foam, a shock absorbent material which is built into sections of the suits and moulds to the body shape through natural body temperature.

Kushitani pioneered the use of perforated leather in their suits using a mesh of holes of specific sizes. This process was originally developed in conjunction with Graeme Crosby to cope with the heat exhaustion suffered by riders in the Suzuka 8 Hours race, and is covered by company-held patents that are rigidly enforced worldwide. Zylon is another synthetic material used in Kushitani’s suits as body armour – an abrasion-resistant, flexible and breathable product which is five times stronger than carbon fibre and seven times stronger than Kevlar. Zylon was originally developed for bullet-proofed vests and has also been used in space programs. 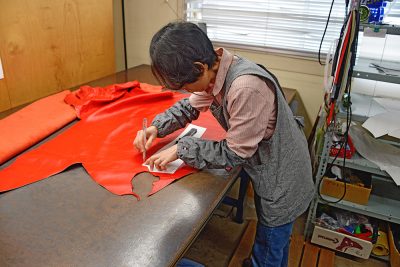 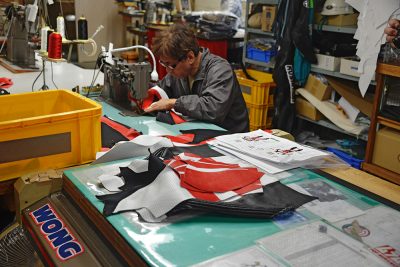 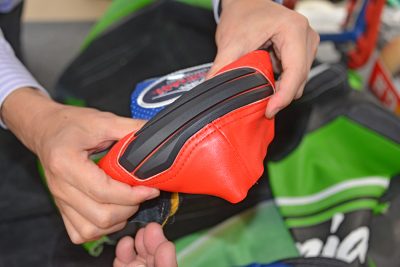 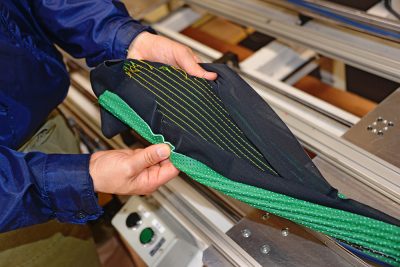 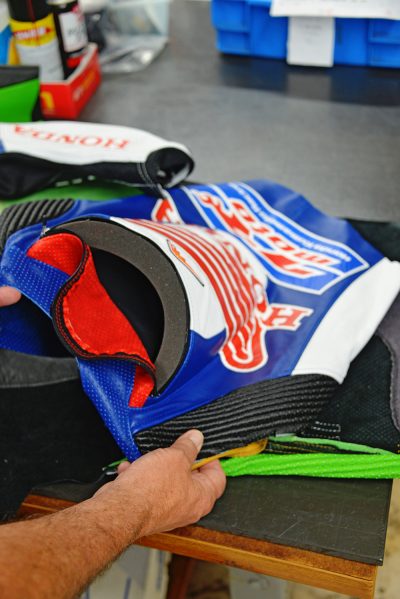 The Kushitani operation is split between the original factory in Hamamatsu, where around 1000 hand-crafted racing suits are made to order each year by a staff of less than 40, and a separate factory in the neighbouring Saitama prefecture which makes all the off-the-shelf items that are sold through the retail outlets.

Inside the original factory, little seems to have changed over the years. A retail shop occupies the ground floor. My visit was hosted by June Kushitani, who spent many years in USA setting up and running the Kushitani operation in California. While the designs are all computer-generated, once the garment’s specifications, colours, logos and special requirements are finalised, it’s basically a handmade operation. Many of the staff members have been with the company for decades, and much of the machinery, although obviously highly specialised, is quite venerable as well. 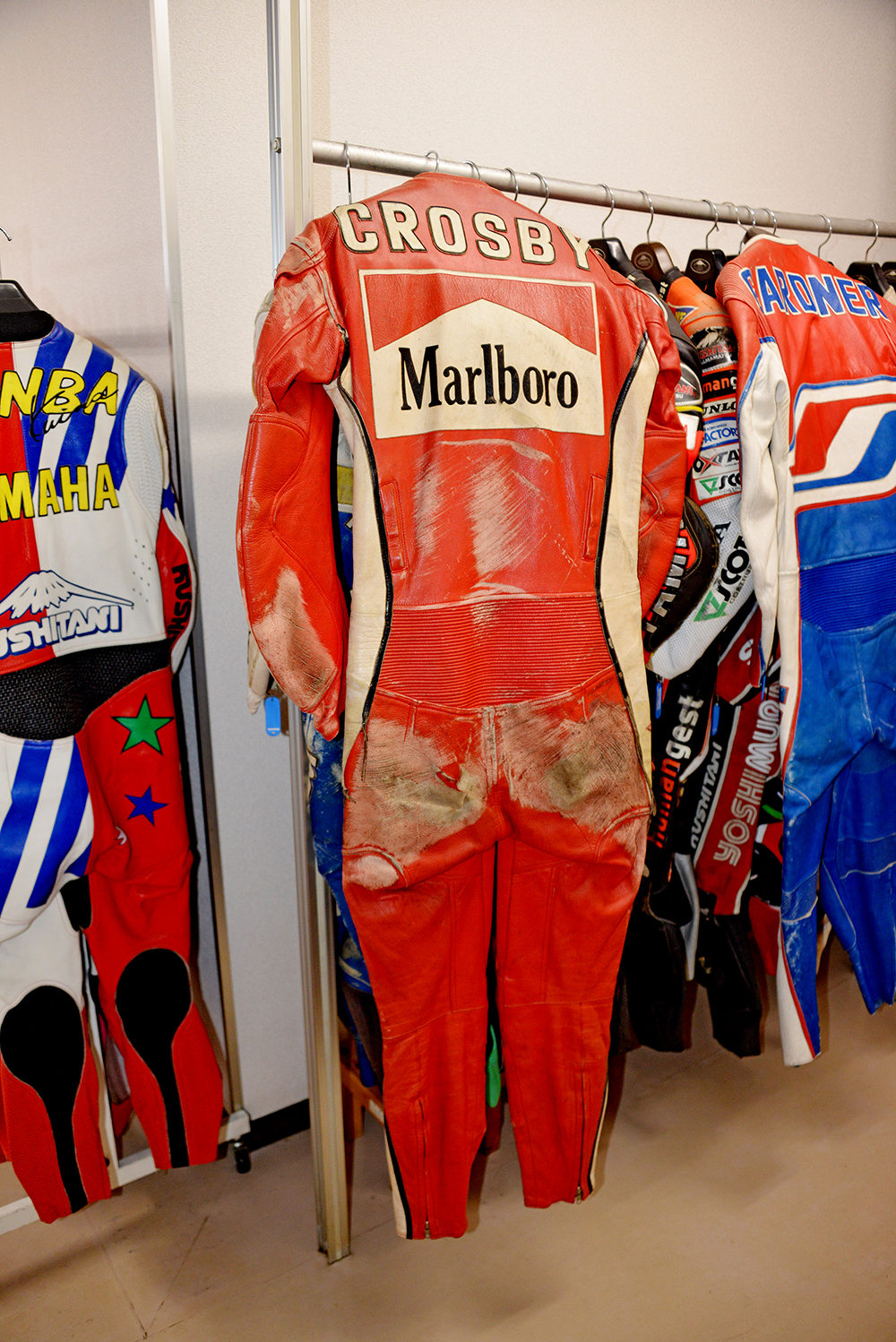 Each suit is made up of more than 100 sections, a template for each section being created in CAD before becoming a paper or cardboard template. Even the interior lining is made in this way from numerous individual sections before being stitched together. Each of the leather panels is cut by hand using scissors, a process that generally occupies a full day and cannot be rushed. One mistake and it’s back to the drawing board.

Once the cutting process is complete, the suit is stitched together by a small team of experts. The seams are folded and butted together, almost eliminating exposed stitching that can be worn through in a crash. An elastic panel in the lower back area of the suit allows it to adapt to the innumerable positions the rider will adopt in racing.

This is constructed by combing a perforated leather panel with an elastic backing that is produced on a special frame that stretches the material so it can be cross-stitched into place. Along the way, protection elements are incorporated into various sections of the suit. It’s a time-consuming and labour-intensive process, but ‘compromise’ is not a word you’ll find in the Kushitani lexicon. 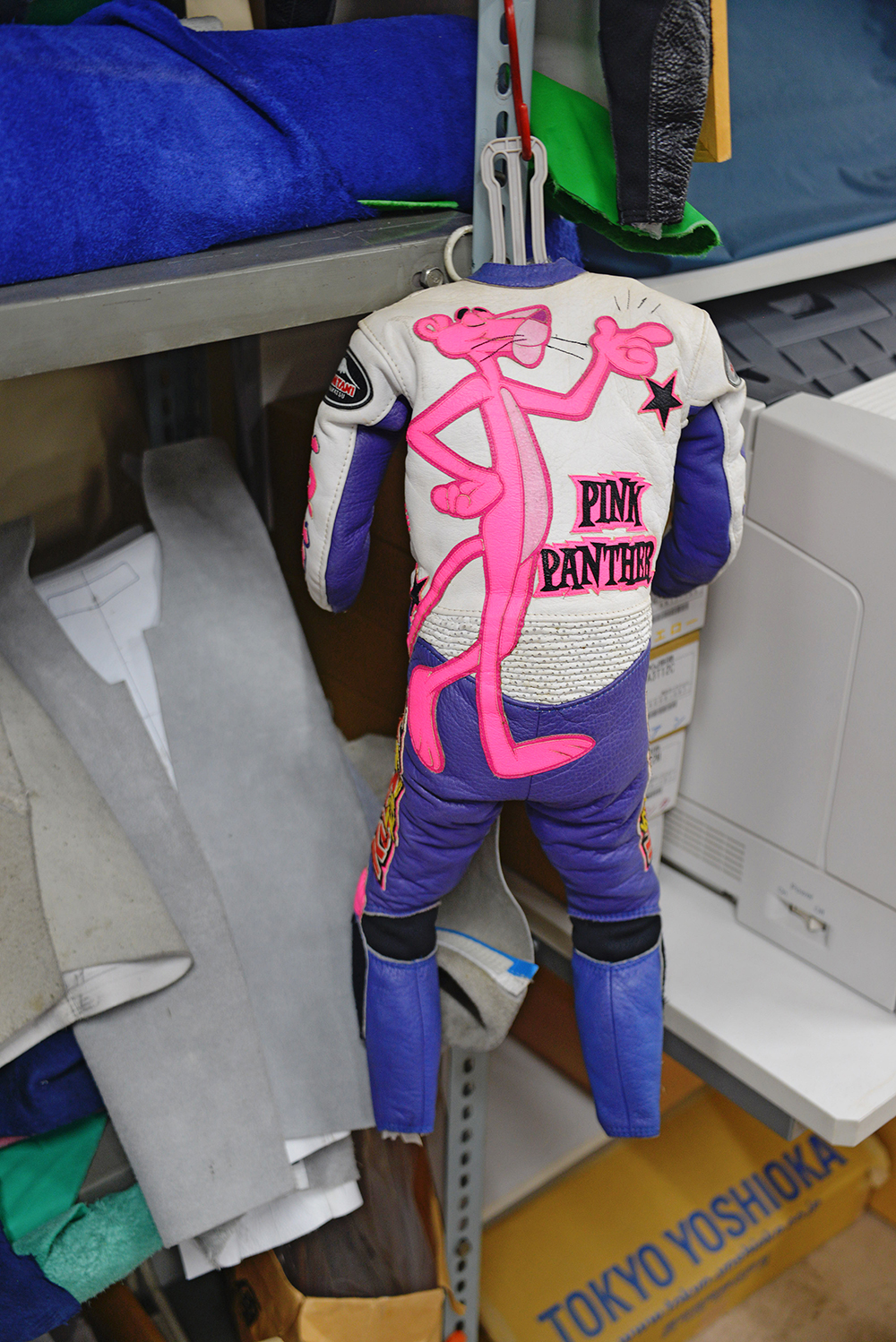 Today, Kushitani operates 45 outlets throughout Japan – the shops servicing as a meeting place for touring riders and groups as much as a retail outlet. Many of these shops offer repairs and alternations while you wait, as well as custom-made suits, and a large range of jackets, pants, jeans, boots, gloves, rain wear and other accessories. As well, Kushitani has a highly-developed online ordering service, where the customer can design his or her own suit, including logos and décor, and finalise all measurements before submitting the order.

The company also has distributors in Taiwan, South Korea, China, Thailand, USA, Russia, Holland, Czech Republic and UK. Currently, there is no distribution for Australasia, a situation Kushitani would love to redress, but admits that the pricing has been a hurdle it has been unable to overcome.

Unlike many other brands, Kushitani’s products are still made exclusively in Japan, and this uncompromising stance means that costs remain high and the brand exclusive. But that’s been the case for the past 70 years. 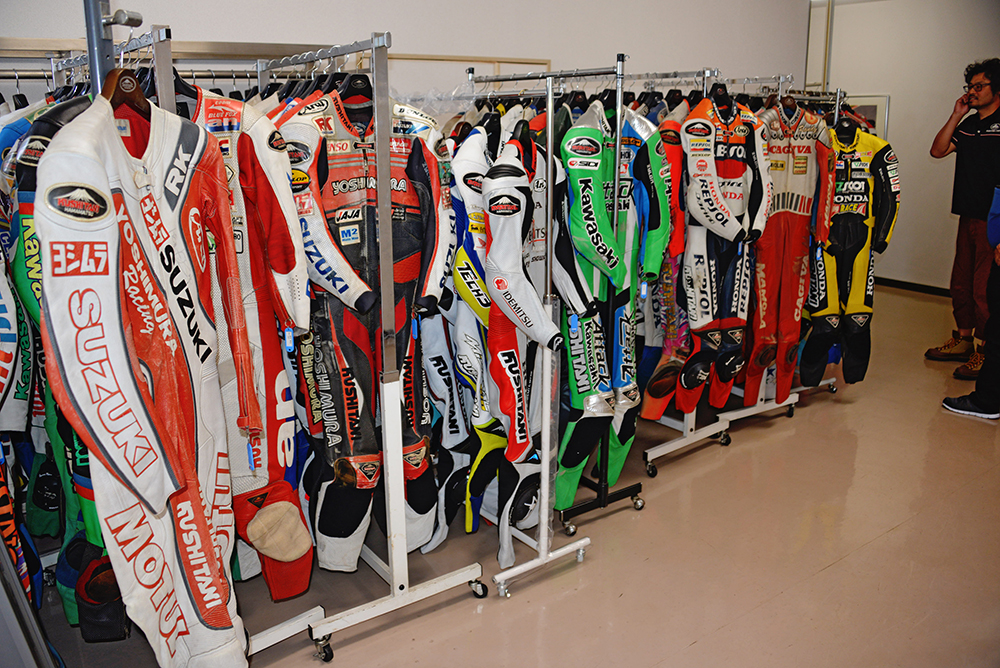