ROSSI: CHAMPION OR NOTHING | LOOKING BACK

In 1995 Valentino Rossi rode his first international season. His results weren’t great, but some of his rivals already knew he was something very special

ROSSI: CHAMPION OR NOTHING

Twenty-six years ago Valentino Rossi achieved one of the most important results of his career: third place in the little-known 125cc European championship.

The 16-year-old didn’t win a race during the 11-round series and was beaten into third overall by French youngster Frederic Petit and 25-year-old Lucio Cecchinello, who had relegated himself to the European series after a dismal GP debut in 1994.

The top-three result was just enough to guarantee Rossi a place in the 1996 125cc world championship, during which he scored his first GP victory and gained his first legion of fans.

Who knows what would’ve happened if he had finished fourth in 1995.

For a man who made his name with theatrical flourishes of racetrack wizardry, this was a distinctly downbeat start to the greatest motorsports career of all time – scraping through by the skin of his teeth.

It certainly helped that Rossi had friends in high places when he was kid. His dad Graziano had been a factory rider for Suzuki, Yamaha and Morbidelli, so he knew everyone who was anyone in Italian motorcycle racing.

Carlo Pernat was the man in charge of Aprilia’s racing operations at the time. He has since been personal manager to Max Biaggi, Loris Capirossi, Marco Simoncelli, Andrea Iannone and Enea Bastianini. 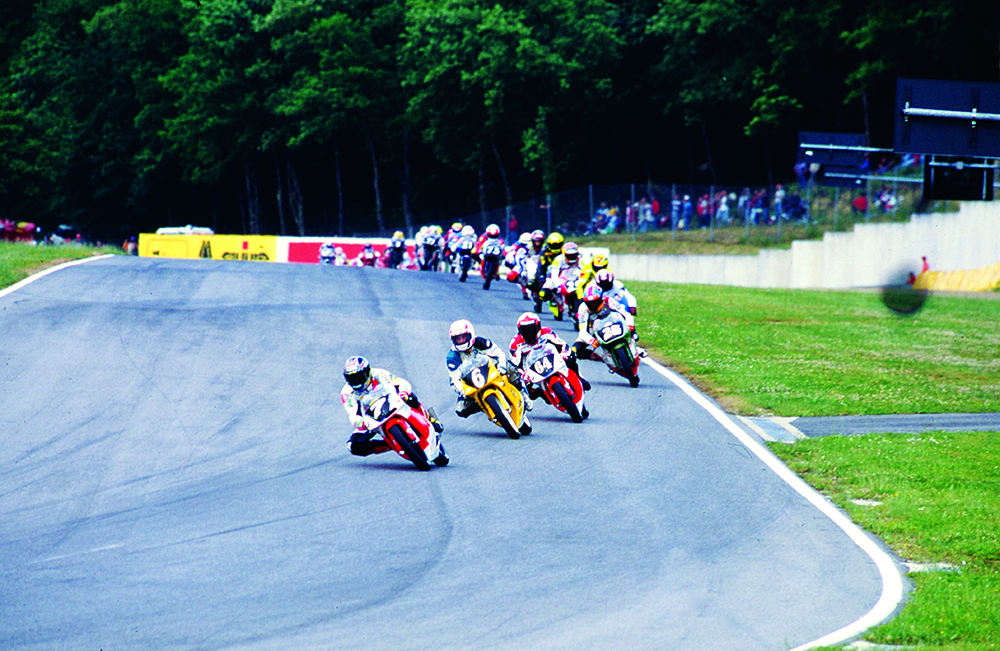 At Mugello Lucio Cecchinello leads Frederic Petit, Marco Carnevale, Paolo Tessari and Rossi. The Casanova Savelli right/left is significant because it’s where Rossi and his dad camped out when they went to watch GPs – and it’s where his fan club first based itself

“I made the first contract with Valentino for the 1995 125cc European championship,” recalls Pernat. “I had already been friends with his father for many years and the story began when Graziano called me 20 times a day, ‘Hey, Carlo, my son is so strong on a bike!’”

Pernat saw Rossi in action for the first time in an Italian championship race at Misano in 1994 and was immediately won over.

“Shit, he was unbelievable!” Pernat recalls. “Many times he ran off the circuit, then he would come back and go even faster. I was thinking to myself, ‘Carlo, this is strange, he is either a great champion or a nothing!’. Finally I decided, this is a very strong rider!

Thus Rossi’s first racing salary was 24 grand. Not bad for a 16-year-old.

Pernat obviously wanted his new find on good bikes and in a good team, so he equipped him with an Aprilia RS125 GP bike and entrusted him to Motoracing, an established outfit, run by Mauro Noccioli and Giacomo Guidotti, two stalwarts of the Italian racing community. 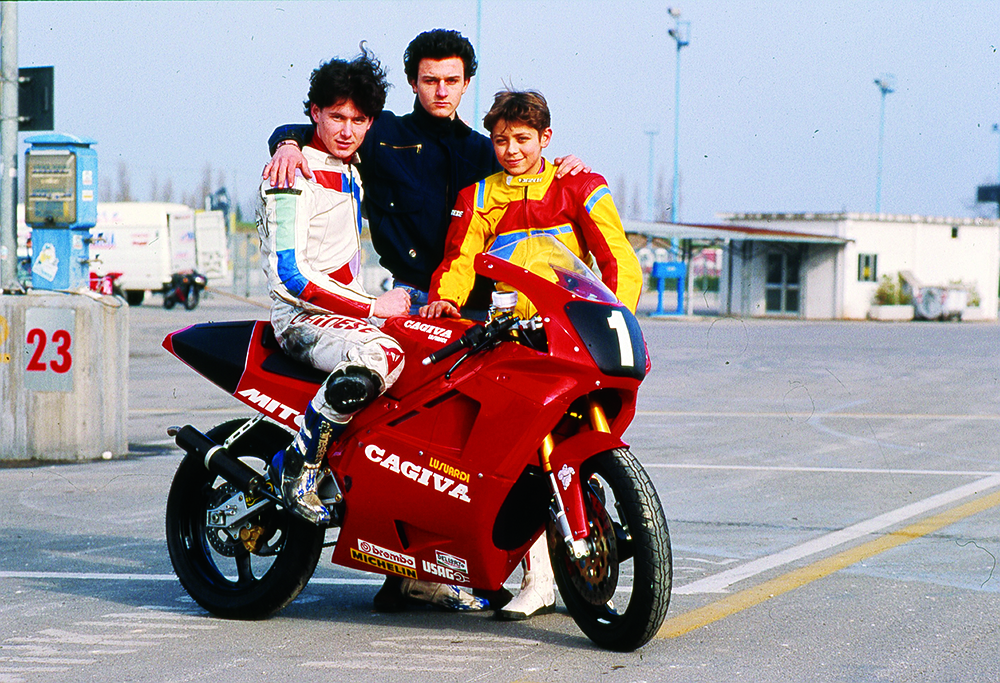 Obviously, no one, not even Pernat, had the faintest idea of what they were dealing with. Rossi was just one of many rising stars of the time. And he was still just a kid, who needed careful mentoring – push him too hard and he might go home, don’t push him hard enough and he might not reach his full potential.

“At first it was quite difficult,” Noccioli remembers. “We had to be careful not to put too much pressure on him. He loved riding the bike, but when he was off the bike he wanted to play around on his bicycle and on his PlayStation. We realised we had to let him do all of that, because this life needed to be fun for him.”

The season started at Jerez in May, where the European championship race was a support event during the weekend of the Spanish GP. While Mick Doohan, Loris Capirossi, Norick Abe and all the other big stars went about their business, taking no notice of the pesky Euro kids parked at the tatty end of the paddock, Rossi topped practice, qualifying and warm-up. He led the race too, until he nearly crashed and had to ease his pace. Cecchinello beat him by five seconds.

This was the story of the season. Rossi showed a lot of promise but too often suffered technical problems or ended up on his backside.

“I was always racing with Cecchinello,” Rossi recalls. “He had an HRC-kitted Honda RS125 which was impossible to beat, but I wanted to beat him, so I’d go, go, go! And after I’d crash, crash, crash!” 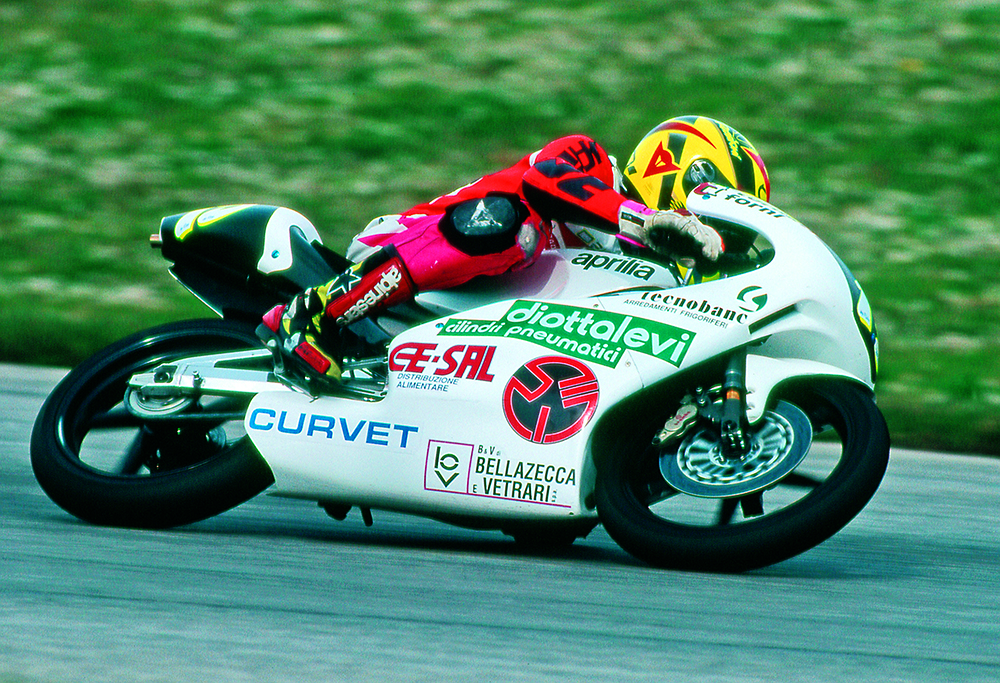 Cecchinello, who now owns the LCR Honda MotoGP team, had a fast motorcycle and more experience than his rivals, so he dominated the season. However, he was occasionally stunned by Rossi’s raw, uncut talent.

“I remember my first fight with Valentino at Nürburgring,” says Cecchinello, who went on to win seven GPs before moving into team ownership. “He was behind me and going into a corner I was expecting him to pass me on the inside, but he passed me on the outside.

“At another corner I braked so late, but he passed me on the brakes. I thought, ‘wow! Where did this guy come from? How is he able to do this?’ By then I already knew that he was somebody who could become a really strong rider.

“He crashed a lot at that time because he was really pushing. I remember another big fight with him. I closed the door on him quite hard and he crashed, damaging a finger quite badly. He says that when he looks at that finger he still thinks about me!”

Second place at Nürburgring was Rossi’s first international podium, but it was another four races before he was back in the top three. At Donington Park, once again racing alongside the GP circus, he fought Petit for second, then crashed, remounted and took the chequered flag in fourth. It wasn’t all bad news though. His best lap at Donington would’ve put him in the points in the 125cc world championship race, staged later the same day, which told him he was ready for the next step. 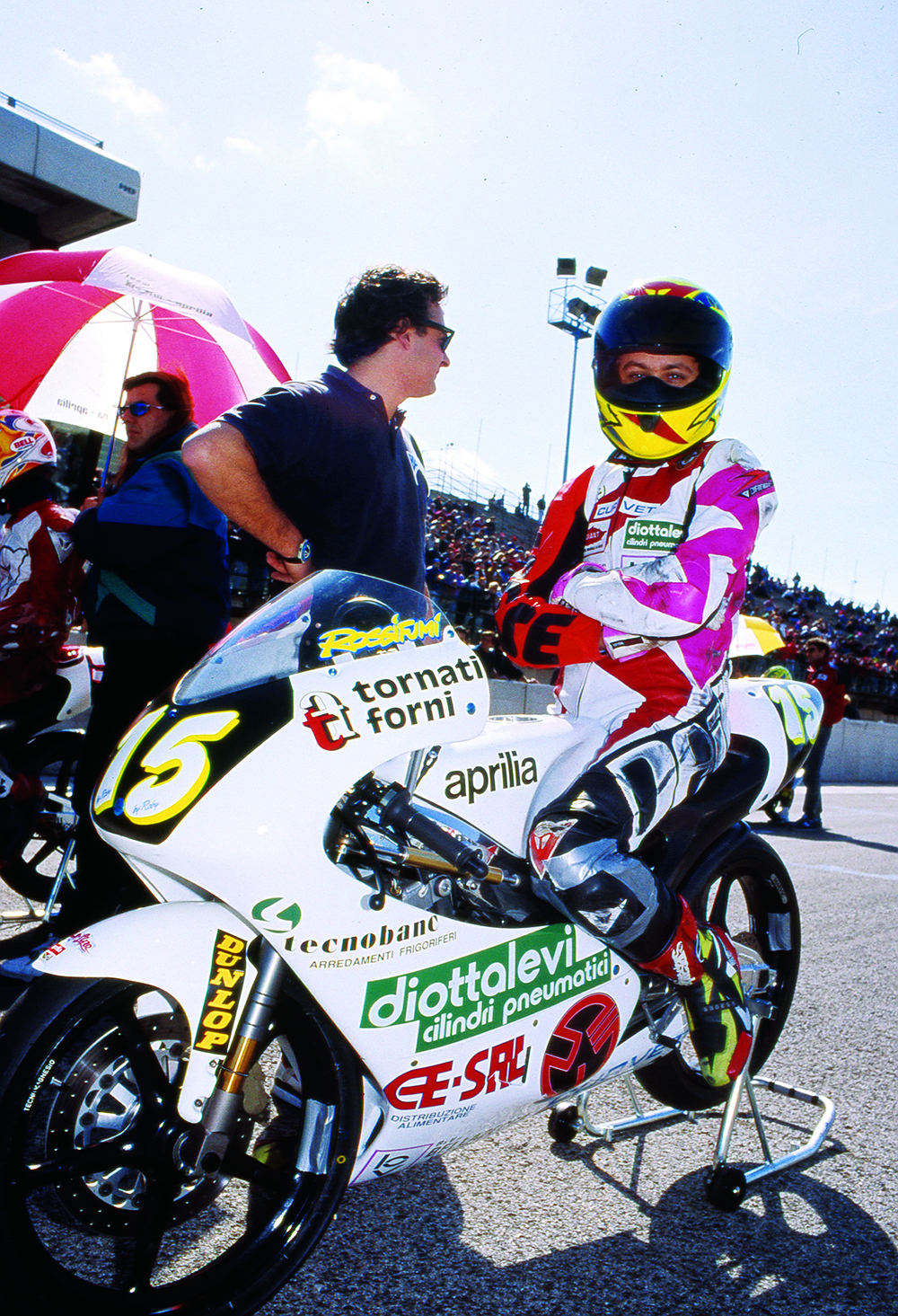 One of the secrets to Rossi’s success is that his racing life isn’t all about racing. What transformed him into a global superstar is his love of the whole deal – from living in the paddock and travelling the world to making friends, entertaining the fans and generally sharing his joy with everyone.

That was already happening in the summer of 1995, when he got to know Haruchika Aoki, 125 world champion in 1995 and 1996. The Italian teenager and the Japanese teenager were genuine friends but there’s little doubt that Rossi’s giant brain was already working in overdrive – when you’re trying to learn a craft, there’s no one better to hang out with than the master.

“Valentino asked me for advice and we became very good friends,” Aoki remembers.

“We became like brothers. I stayed at his house in Italy and when he joined the world championship the next year he stayed at my home in Japan. At the races I was like a teacher for him – we would walk the tracks, so I could show him the braking points and the best lines. In 1996 he sometimes followed me in practice, learning how to get the lap time. 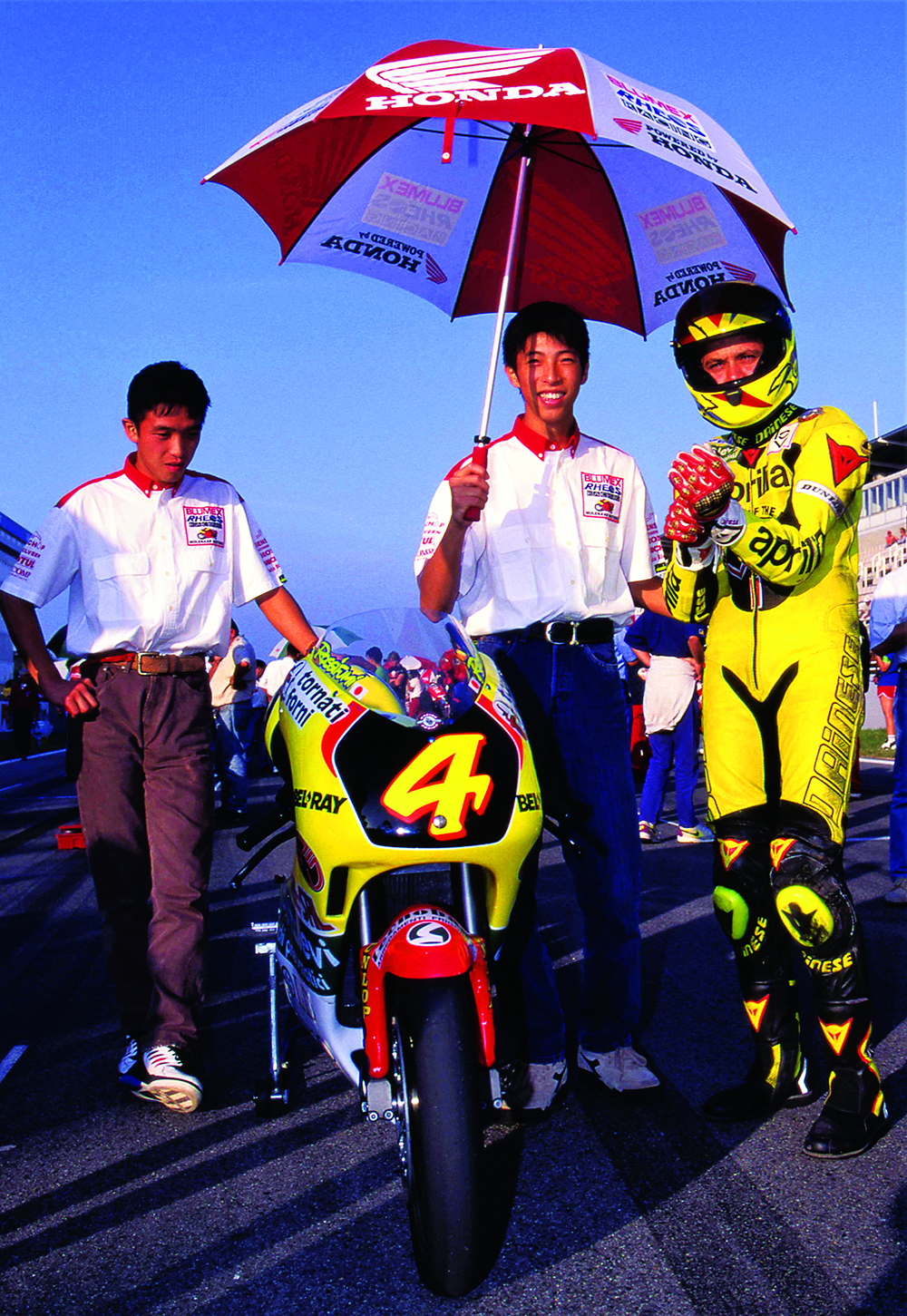 During the 1995 Euro 125 rounds that were staged at GPs, Rossi made friends with 1995 125 world champion Haruchika Aoki (holding umbrella). On the left is Nobu Aoki. This is on the grid at Catalunya

“Valentino was a bit crazy, but he was also very clever. He always set himself a rival to beat, so he always had a goal in front of him.”

By the seventh round of the 1995 Euro series Rossi’s hopes of winning the title were already gone, with Cecchinello and Petit well ahead on points, but he needed to get his act together to stay in the top three, to fulfil his GP dream the following year. Of course, he wasn’t the only one with that intention. During the closing stages of the championship he came under increasing pressure from rising Czech star Jaroslav Hules, who beat him three races in a row.

Then Rossi broke his left wrist while riding a dirt bike at home. There were two races remaining – crunch time.

The penultimate round was staged at the tiny Braga circuit, which loops around the Portuguese city’s airstrip. Rossi was lucky that renowned MotoGP medic Dr Claudio Costa was there – possibly at the behest of Graziano – to look after his wrist. He finished the race in third place, while Hules crashed out. 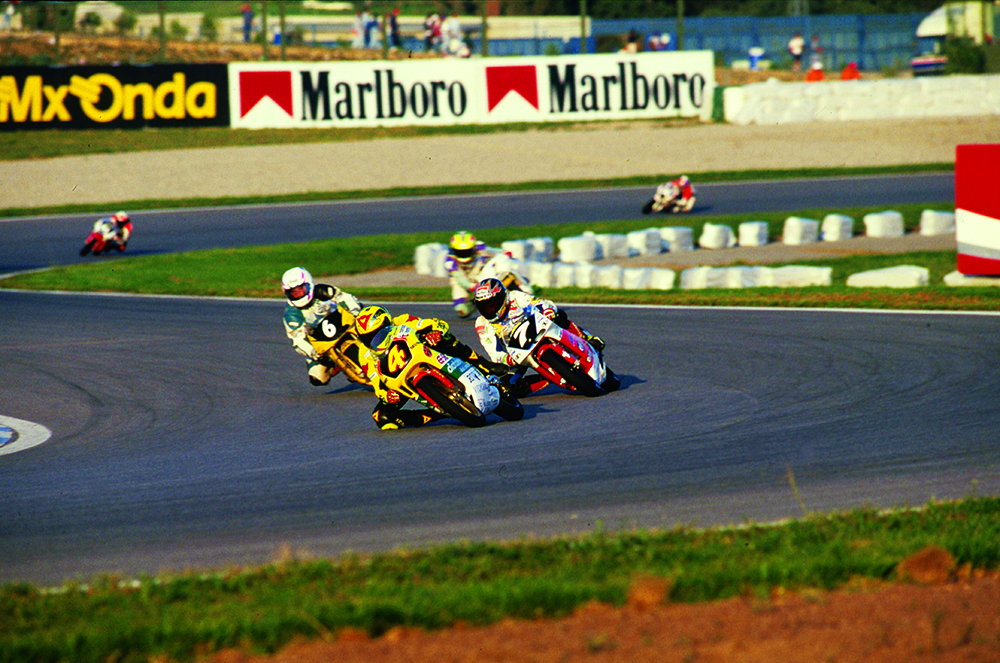 By the time Rossi arrived at Barcelona for the season finale he still hadn’t won a race. Once again he threw everything he had at Cecchinello and this time he might’ve beaten him, if his Aprilia’s sparkplug hadn’t failed in the final laps.

But it didn’t matter. The youngster had secured third overall and was on his way to the world championships, along with Cecchinello and Petit.

“We had many strong battles at the beginning of races, but then he dropped back, because my tyres were better than his in the heat. After one race I looked at his bike and saw that his tyres were completely destroyed. I thought, how is it possible that this guy can finish just a few seconds behind me with tyres like this?! That was unbelievable to me and it explains why he is so good at finding the right feeling with a motorcycle. 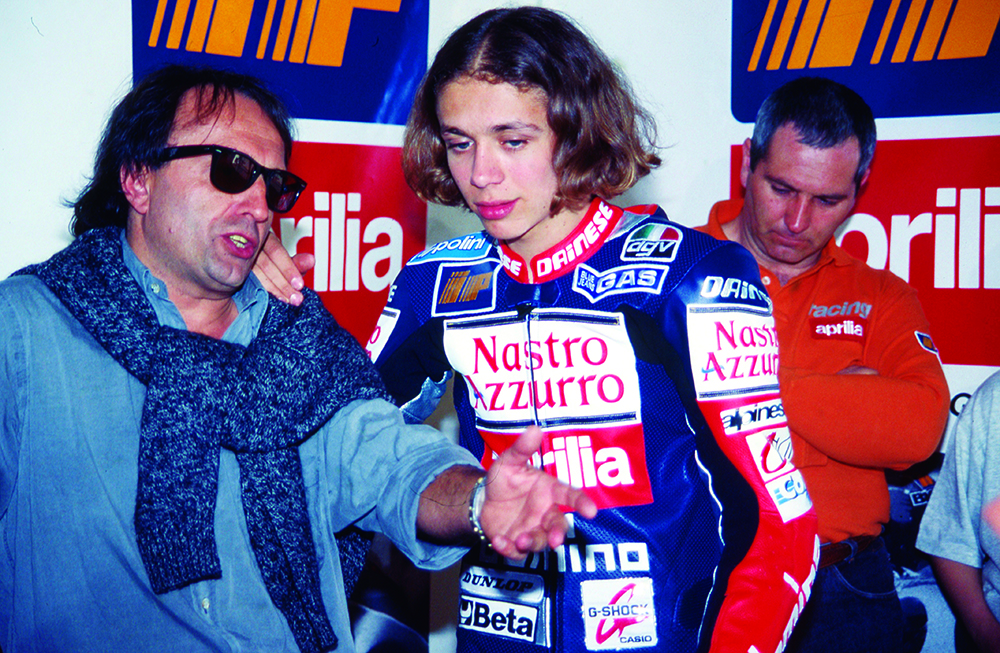 “I’d wait for him to attack me here, but instead he would pass me there, where he hadn’t shown that he was stronger. Even then it was already clear to me that he was a genius. He had a great, great talent, but honestly I didn’t expect that he would already be fast enough to win a GP in 1996.”

Pernat had to create a new team for Rossi to contest the 1996 125cc world championship because Aprilia only ran factory teams in 250s and 500s.

“So I called another old friend, Giampiero Sacchi,” says Pernat, of another Italian team boss who has worked with a Who’s Who of bike racing heroes, from Angel Nieto to Jorge Lorenzo.

“I said, ‘Giampiero, I have a new and very strong rider but no team for him’. We made a deal, a very good deal for Giampiero, who got free bikes, 200 million Lira [around $200,000], Mauro Noccioli as Valentino’s technician and he had the fairing space free for his own sponsors.

“The first months of 1996 weren’t easy. Valentino crashed many times and Beggio was a bit angry with me. Then Valentino won his first GP at Brno in August. By then I thought he could win the 125 world title one day, but I never thought he would become a nine-times world champion.”

Valentino is contesting his 26th world championship season, during which he should start his 425th GP race since his debut at Shah Alam, Malaysia, in March 1996. And he may, just may, add to his total of 115 GP victories. 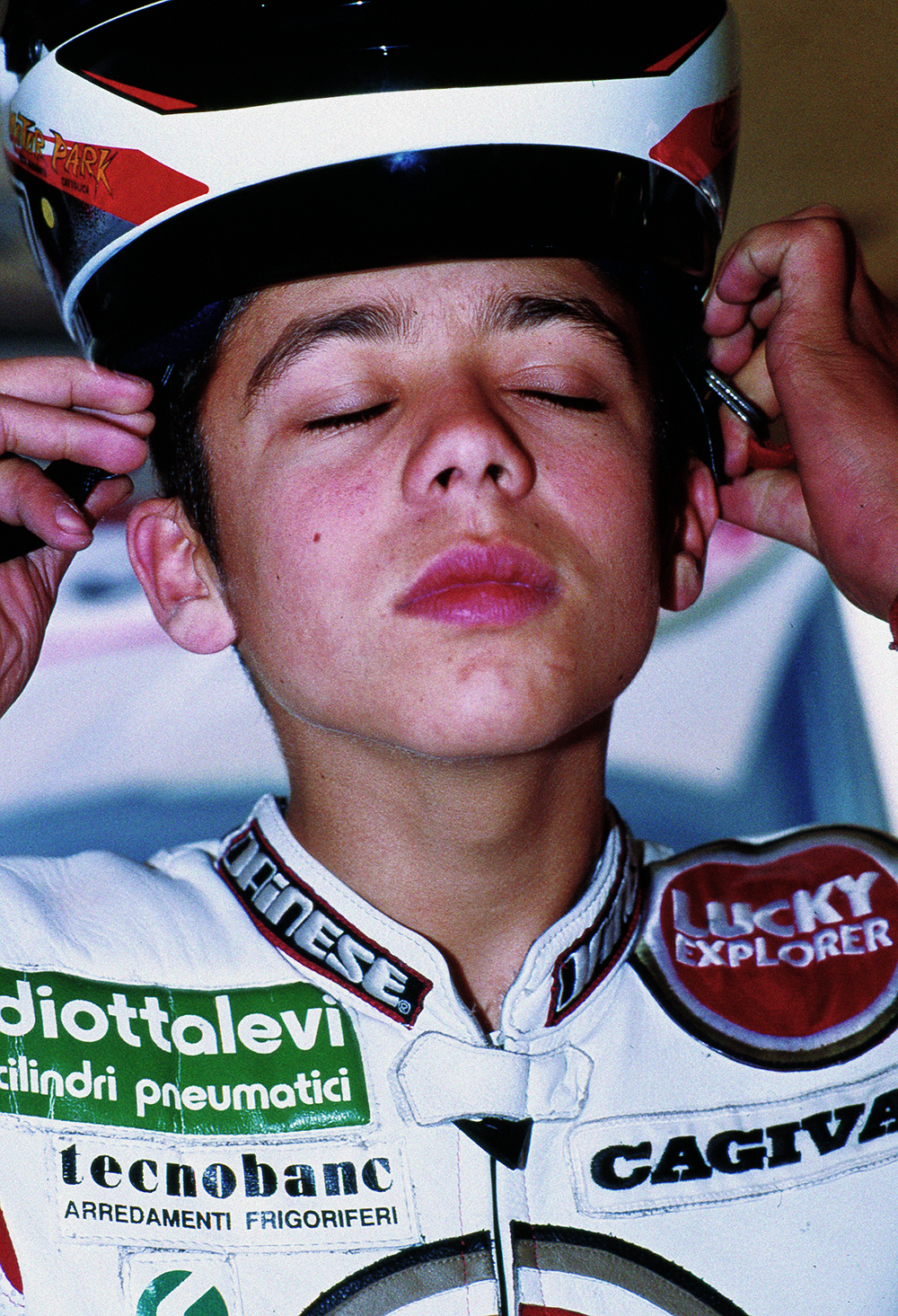