Triumph pioneered the 1950s scrambler look and seven decades later has produced a retro-themed package jammed with modern technology. The build quality and finish are both excellent and it’s a striking looking motorcycle with its high stance, blacked-out engine and upswept exhaust.

Looks are subjective of course, but from a tech point of view the Scrambler bristles. Heated grips, cruise control and LED lighting are all standard features, as well as lean-angle sensitive ABS and traction control, and six switchable ride modes in Road, Rain, Off-Road, Sport, a rider-configurable mode and Off-Road Pro. Off-Road Pro disables the traction control and ABS systems completely, and the other five adjust the ABS, traction control and engine characteristics depending on which mode you choose to suit the conditions. All modes can be adjusted on the fly. 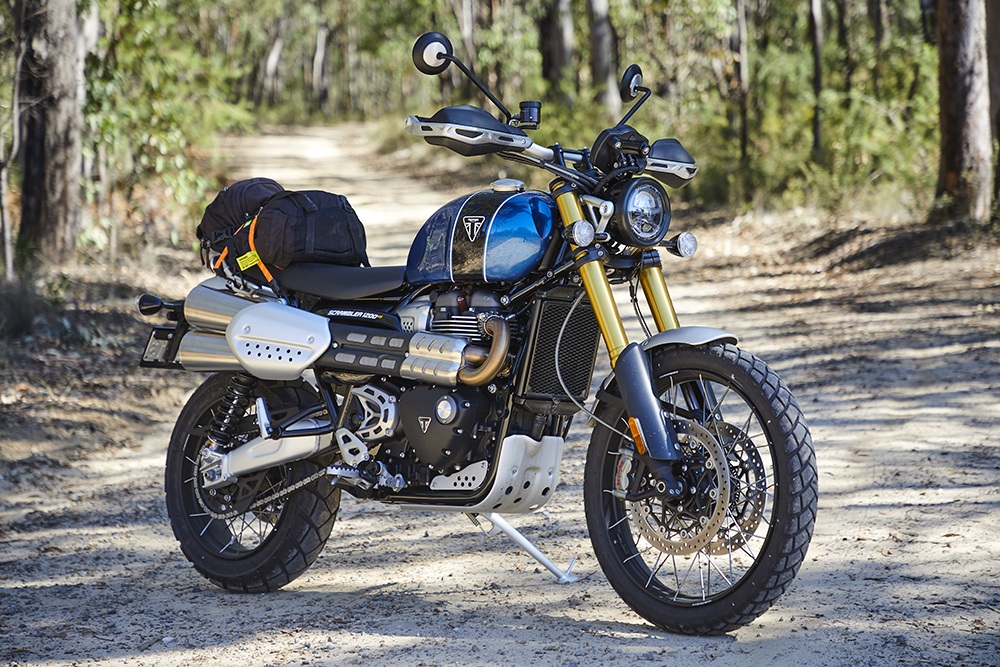 The Scrambler’s 1200cc parallel twin puts out 66.2kW of power at 7400rpm and a juicy 110Nm of torque at a low 3950rpm. The XE is no slouch, but it’s the fat torque figures that make the powerplant such a ripper. It will happily plod along in top in its six-speed ’box at just about any speed, wind on the throttle and it’ll pick up speed effortlessly. And while it makes for a very versatile powerplant while you are trundling along, it’s when you punch the Scrambler out of tight corners, or leave the bitumen, that the engine really shines. It’s a lovely engine and perfectly suited the bike’s dual-purpose design brief. 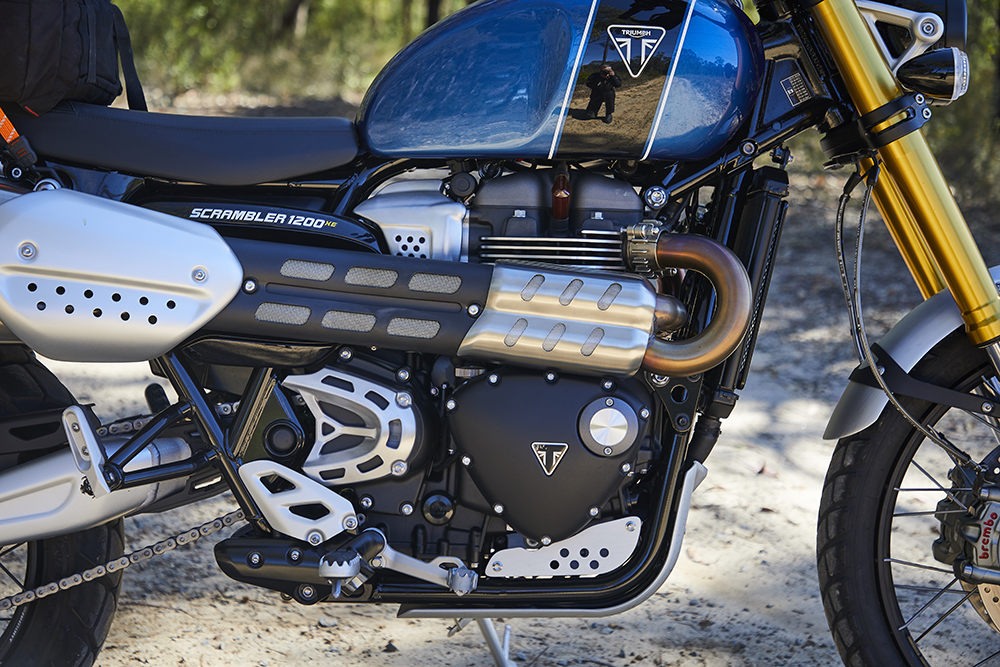 The engine is complemented by a really lovely gearbox and light-action clutch, however the clutch on this particular test bike was grabby before I could get some heat into it.

Speaking of heat, the stainless-steel upswept exhaust system sounds pretty good in factory trim, and is certainly in keeping with the look, but it’s a case of form over function. It’s not so much of an issue when standing on the ’pegs, but for normal riding, the header pipe is routed through the very same place your calf wants to be, so if you’re not constantly mindful of it – or wearing high motocross boots – you’re going to get burnt. There is a heat guard, but it’s largely ineffective. It’s a quandary, because a Triumph Scrambler can’t not have a high-mounted exhaust, but the more I rode it the more it gave me the shits.

Triumph hasn’t skimped on the brakes, though, the Scrambler runs Brembo’s top-notch M50 Monobloc calipers and a pair of superbike diameter 320mm rotors up front. It’s got all the power and feel you need. But should you lack a little finesse on the picks Triumph’s ABS system helps keep you the right way up. 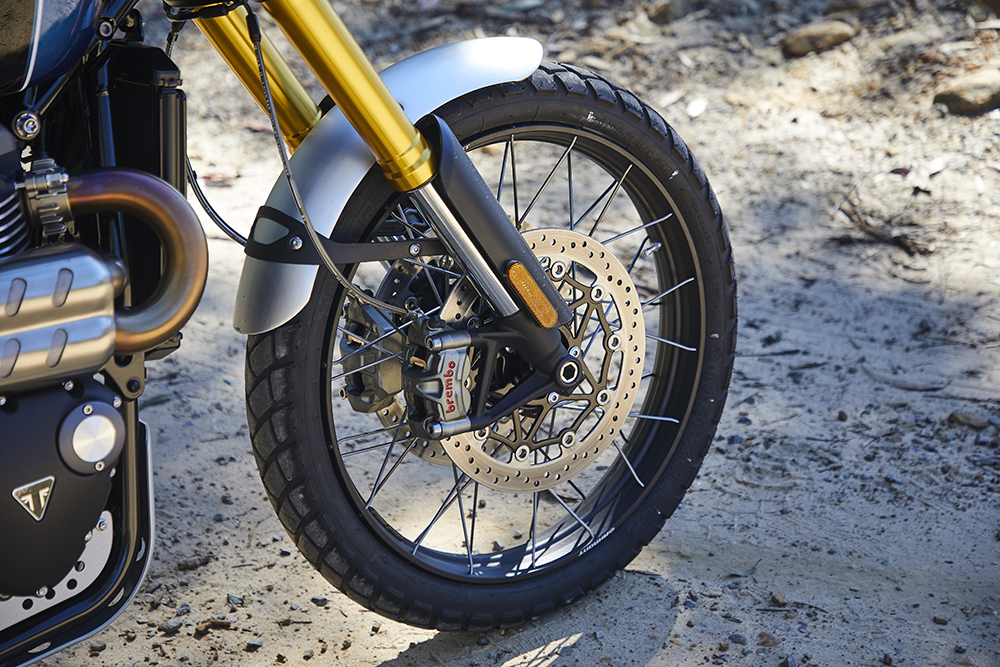 While she’s a sexy looking bit of kit, she’s no showroom queen, and off-road the XE feels like some amped up retro motocross bike. It’s a blast to chuck around and it’s not until you start jumping the 200-plus kilogram unit off and over things, that you start finding the limits of the suspension. Again, that engine, which is so tractable and versatile, is perfect for off-road exploration. The 21-inch front matched to a 17-inch rear wheel helps smooth out the terrain and provide plenty of tyre options once you wear the factory-fitted Metzeler Tourance hoops out.

Body position while standing is bang on the money for my 186cm frame and both the gear and brake levers are positioned well. Off-road mode works well in all but the gnarliest off-road sections, where the traction control can impede progress in loose rock or deep sand. But flicking to Off-Road Pro – standard on the top-tier XE model – cuts the traction control and ABS completely for those ugly off-road sections. 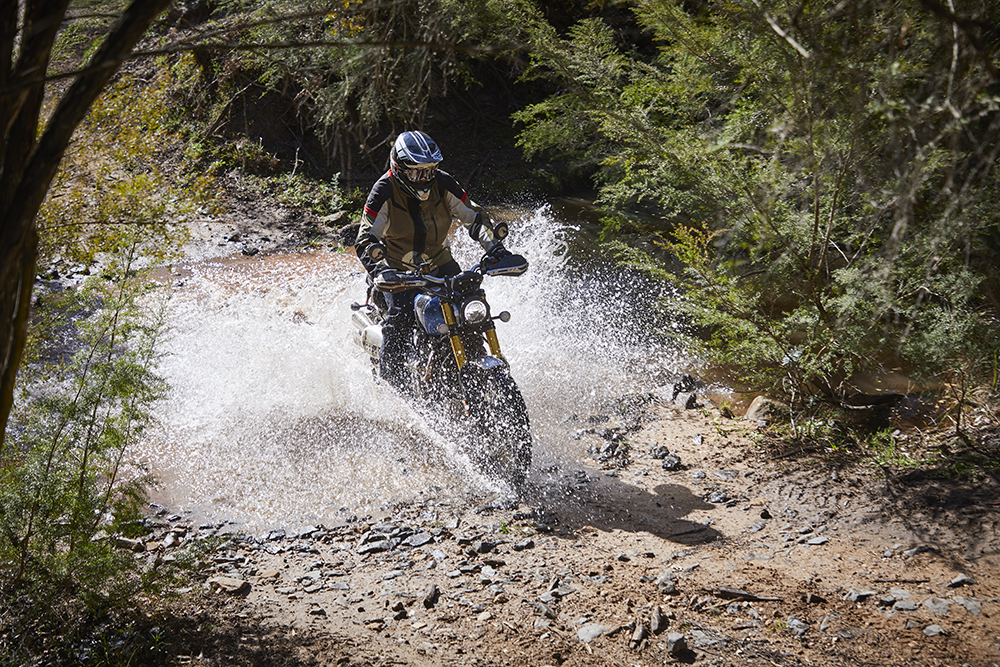 The XE runs a fully adjustable 47mm Showa USD fork and a pair of Öhlins piggyback shocks on the back offering 250mm of travel at both ends. That’s enough to put plenty of adventure bikes to shame, and the kit works as well off the road as it does on it. Road handling is predictable and fun, and when pushed you’ll find the limit of the Metzelers on the road well before the suspension lets you down. Despite the long travel, front-end dive under brakes is minimal, yet the package is plush enough to soak up everything Australia’s shitty country roads can throw at it.

The XE’s long legs have pushed the seat height up to 870mm, which is on the tall side even for an adventure bike, but the weight sits fairly low so the XE doesn’t feel as cumbersome as some of its high-rise adventure bike contemporaries do.

The Scrambler’s report card all looks good but there’s a few tidbits that hinder its versatility. One, it’s naked, and when you’re my height, the wind wants to blow you off the seat at highway speeds. You either hold those bars tight and wear yourself out or, like any other nakedbike, grip the tank with your knees. Except that’s not an option on the Scrambler due to its gorgeous upswept exhaust that’s not just uncomfortably hot, it’s oh-f*** hot! 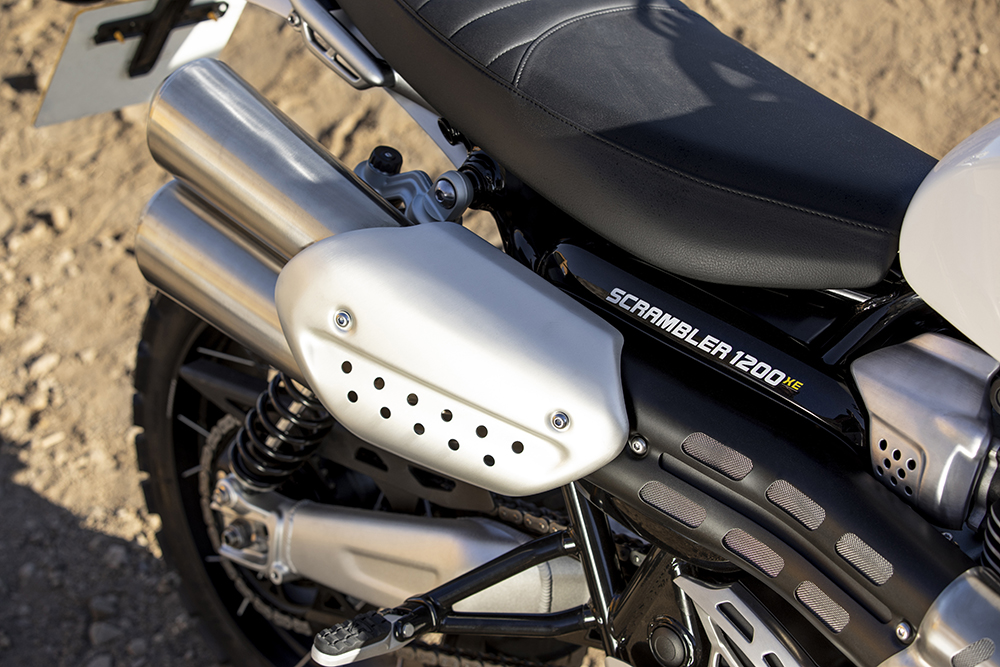 Another is the Scrambler’s lack of luggage carrying capacity. Yes, it’s got a practical plank-style seat, but if you’re planning on attaching a pillion, you’ll be hard pressed to carry much luggage. Triumph does offer a tank bag and pannier kit, but the exhaust sits where the right-hand pannier would so the so-called kit is made up of just one bag, which is enough to throw my OCD tendencies into a conniption.

The seat suits the look of the Scrambler and if you’re fanging around town, it doesn’t pose a problem. But extended kays on it makes it feel like you’re sitting on a rhinestone-encrusted ironing board. Passenger comfort over long distances is no better, I’m told.

Gripes aside, it’s far from a half-arsed retro gimmick. In fact, it’s a dual-purpose bike with spunk and charisma. It’s got a sweet engine with an extensive electronics package, a chassis adorned with quality suspension and it looks all sorts of cool.

Despite its homage to a bygone era, it’s as off-road capable as most adventure machines out there, and better than many. 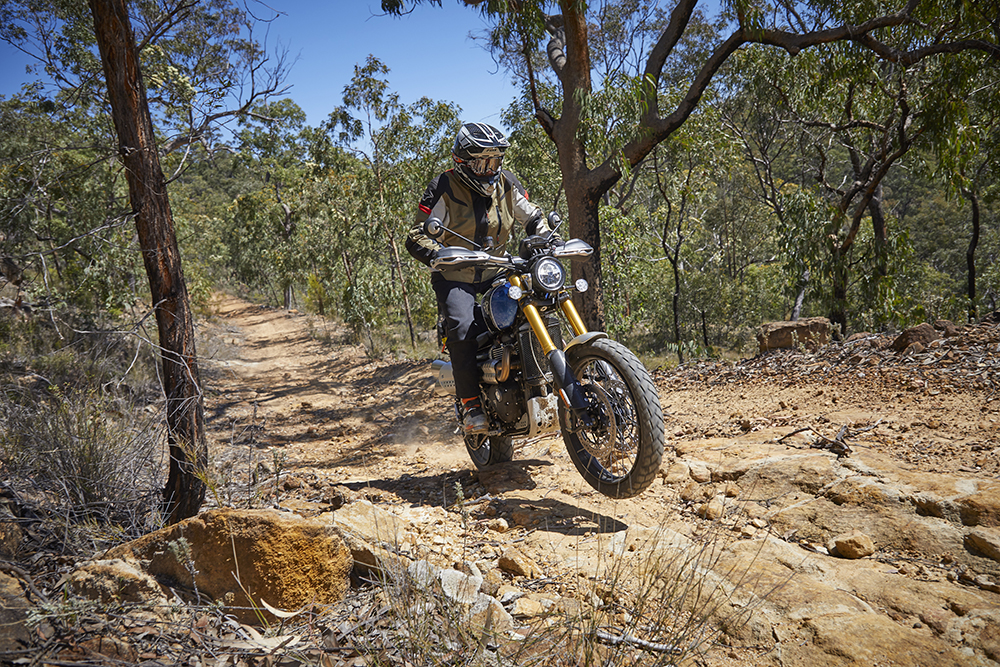