Thirty years ago one of motorcycling’s all-time greats made his agonising entry to world championship racing. When Mick Doohan made his Grand Prix debut at Suzuka on 26 March 1989, he had already learned that the 500cc two-strokes of that era were difficult things to master. It would be a while before he had them worked out.

“We went testing at Suzuka in early January, and it was pretty cold,” remembers the Australian, a wide-eyed 23-year-old at the time. “I gave the bike a fistful going through the esses and as I shifted my weight from right to left the rear lit up. The thing had me off the side, so I was hanging onto the handlebars, with both knees dragging on the ground. I ran off the track and slammed into one of those big rubber bales they used at Suzuka. My face ended up in the dirt while the bike got me in the back of the head. The impact broke my helmet open.” 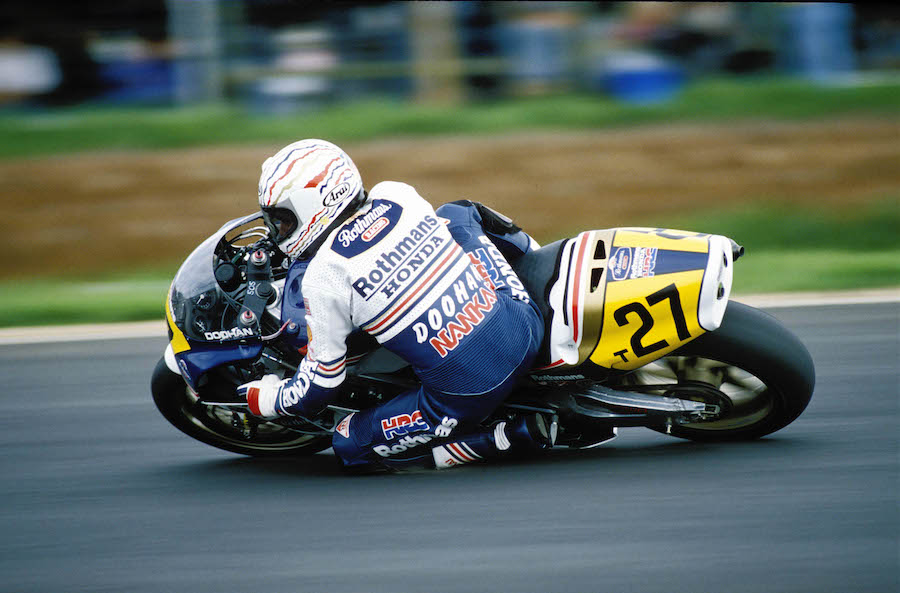 HRC’s next winter tests were scheduled for Goiania in Brazil, where the track was hot and greasy, which allowed Doohan to ride the bike loose, just the way he liked it.
“I was still wary of the thing, but I thought my lap times weren’t too bad. It was pretty hot there, so the racetrack had some feel – I could feel what the rear was doing.”

Then final preseason preparations at Phillip Island and Suzuka, where he crashed again. This was baptism by fire aboard Honda’s fiery NSR500, four times more powerful than the 40 horsepower Yamaha TZR250 he had raced in 1987, dramatically more demanding than the Yamaha FZR750 superbike he had raced in 1988 and much harder to handle than the Yamaha YZR500 he had tried at Yamaha’s test track in October, while discussing racing 500 GPs ride with Honda’s great rival.
“That was my wake-up call. It was like, ‘Wow, so they call this a motorcycle, do they?!’ I realised then that the Honda wasn’t like the Yamaha. The Yamaha was just another motorcycle, whereas the Honda definitely wasn’t. I could see why WG [Wayne Gardner, Mick Doohan’s Rothmans Honda team-mate] was always getting spat off. 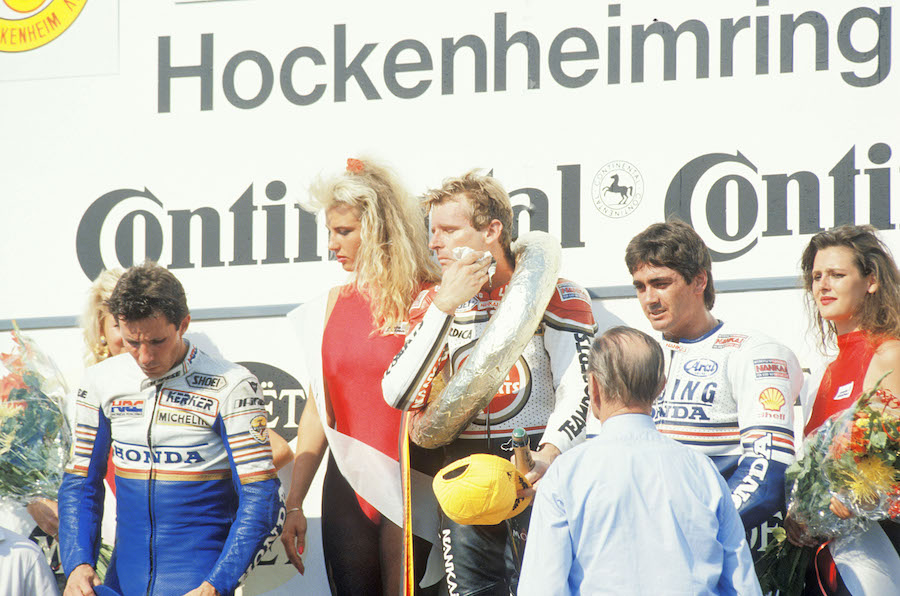 “I wasn’t 100 percent happy with the way things were going, and I didn’t know whether it was me or the bike. I wasn’t getting a lot of feel, and I’d been thrown down the road a few times. I was already thinking I’ve got to change the way I do things. I was feeling a bit cocky after the previous two years. I probably wasn’t preparing myself in the way to go racing. I wasn’t 100 percent dedicated.”
Despite everything, there were glimmers of promise during the weekend of the Japanese GP. Mick Doohan at least knew his way around Suzuka, having contested several 8 Hours races there with Yamaha, so he qualified an impressive sixth fastest, putting him on the second row, behind Kevin Schwantz, Wayne Rainey and Wayne Gardner. But he didn’t get that far in the race – his GP debut came to an end after a few laps when his NSR broke its crankshaft.

Two weeks later he was at Phillip Island, practising for Australia’s inaugural motorcycle GP when things got much worse. During practice, Doohan fell at Southern Loop. It wasn’t a huge crash, but it had massive consequences. 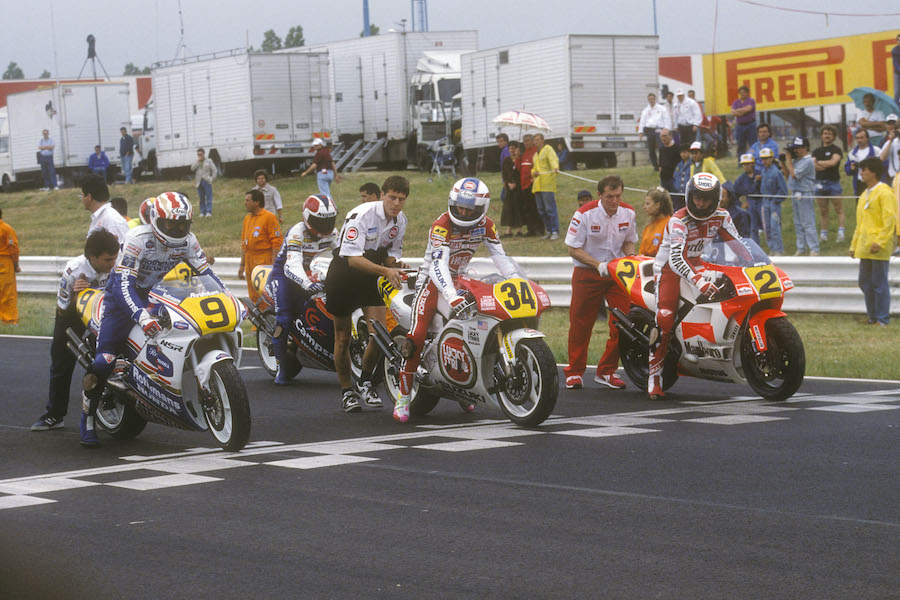 “I got my hand caught under the handlebar and ground away the little finger and the finger next to it. I could see the bone, with gravel in it, and the tendon had been torn away. Right then, I was thinking, what the hell am I doing here? Maybe I’m in a bit too deep. I realised I was on to a completely different playing field where everyone was quick and strong. I really hadn’t been hurt up until then. I thought about the whole deal and decided to keep going.”
The mangled hand was heavily bandaged but Doohan raced anyway. He ran with the lead group until the injury began to hold him back, dropping him to sixth for his first GP finish, 47 seconds down on much-celebrated winner Gardner.

The next weekend Mick Doohan and the rest of the paddock were at Laguna Seca for the U.S. GP. Those fingers were “just starting to grow a film of meat” when he got taken out by Gardner during practice, which reopened the wounds.

Another two weeks later the European season started at Jerez. “I’d been trying different things in practice. On the fourth lap of the race, I changed up a gear through the fast rights behind the paddock. The thing spun up and sent me into the hay bales. That didn’t do the hand any favours.”
No wonder Doohan started eating himself up with self-doubt.
“My confidence had been knocked, and I actually feared hopping on the motorcycle. Every time I heard the boys revving it up in the pits, it was like, ‘Oh my god, have I really got to throw a leg over this thing?’.

“First time I met Eddie Lawson [Rothmans Honda’s third NSR500 rider in 1989], he told me a lot of people can go fast on a 500 straight away, then they have one crash, two crashes, three crashes and they take a big step backwards. In racing, I’ve never heard a truer word.” 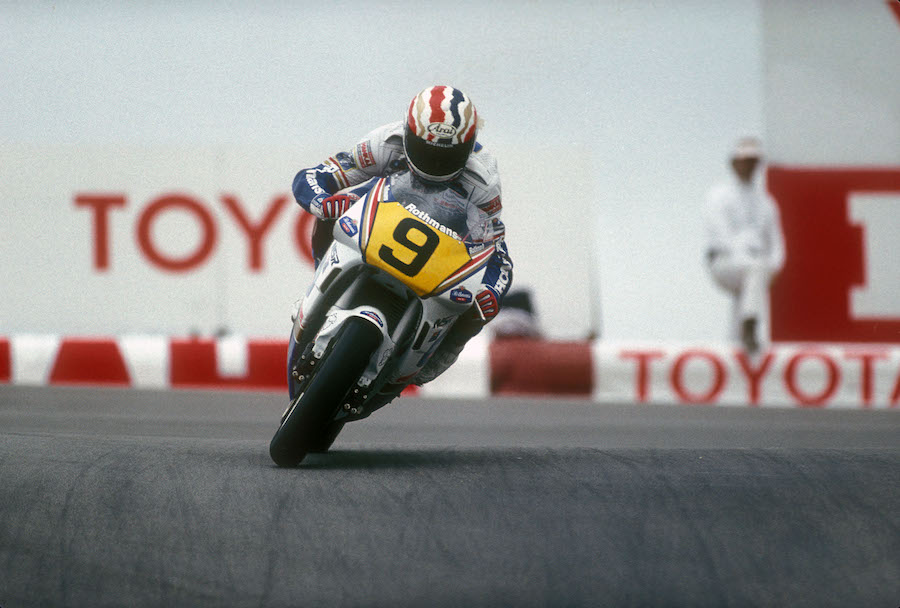 Four weeks after Jerez he got a much-needed morale boost at Hockenheim, where the German circuit’s four long straights at least allowed him to take advantage of the NSR’s vicious power. He finished third to score an historic first podium, alongside winner Wayne Rainey and Eddie Lawson.
“That was a little bit of brightness. I was up there on the podium, thinking that Rob [McElnea, a British rider who had raced GPs since 1984 with Suzuki, Yamaha and Honda] has raced all his career and never made the top three; so at least I’ve got a podium if I do nothing else.”

The following Sunday it was back to business as usual at the scary-fast alpine circuit of Salzburgring, the venue for the Austrian round on 4 June, Mick Doohan’s 24th birthday.
“It was a daunting place. The bike wasn’t steering too well, and I ran off the track. I was heading for a wall, thinking, here goes – it’s all going to end on the same day I was born.” Somehow he avoided the wall and kept going to finish eighth. 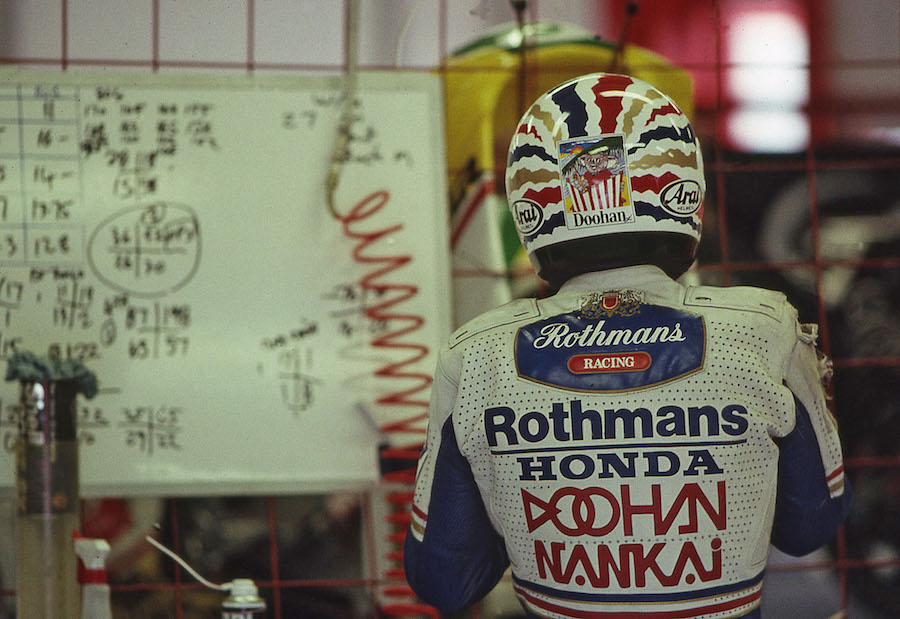 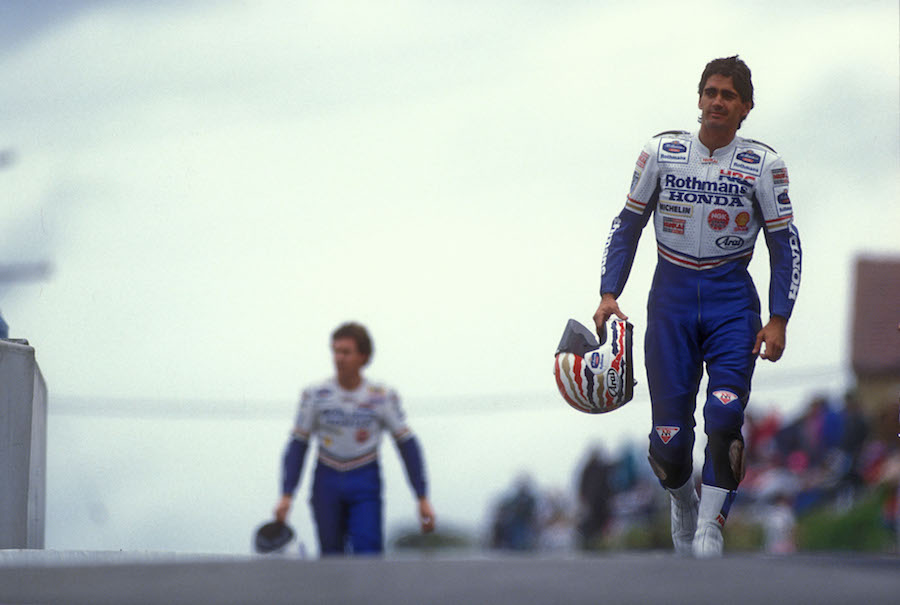 Doohan had survived another weekend, but only just.

“I kept telling JB that Yamaha streetbikes handle better than Honda racebikes, and he just said, ‘This isn’t a streetbike or a superbike, this is a 500, and that’s the way it is. And he kept referring to WG all the time: WG this, WG that, which was fine, because I was the new boy.”

By the time they arrived at Assen for round nine of 15, Mick Doohan had had enough and lit the rocket inside that would help make him a five-time world champion.

“JB was doing his WG bit and I spat the dummy: do I look like WG?! Are my initials WG?! From that day on we got on better. I think he realised there’s a bit of fire in this kid, so maybe he had to work towards what I wanted.”

He finished Assen in ninth place, 50 seconds behind winner Schwantz. And the next Sunday at Spa-Francorchamps he got knocked down at speed by American youngster John Kocinski.
“By now I’d just lost confidence in the whole show. I knew Yamaha had a 500 that felt like a motorcycle. I was thinking I’d done the wrong thing signing with this lot.”

A few weeks later Doohan got a welcome respite from the scary torque delivery of a 500cc two-stroke by riding a Honda RVF750 four-stroke in the Suzuka Eight Hours. This race should’ve massaged his ego because the RVF TT F1 endurance bike wasn’t a million miles away from the superbike he had raced the previous season. Things went well for a while. Doohan and co-pilot Gardner were leading comfortably after five hours when he got too close to a backmarker.

“I was going around the outside when he picked his bike up, and the exhaust caught the little finger on my left hand. The finger got chopped off below the top knuckle, and I crashed. I found the top bit still in the glove.”

Surgeons reattached the stub and Doohan returned home to Australia to recuperate. Just what he needed: some rest and some time to think.

“I’d never really raced under any pressure before ’89, and I was getting worried. This was a real wake-up call. I needed to change my lifestyle.”

Mick Doohan, by his own admission, hadn’t been taking racing too seriously thus far– he had made his way by riding on pure talent and partying hard. “I was having a major crisis in myself. I decided I’d give racing 100 percent, so I’d either make a career of it or I’d know I’m not good enough. That’s when my fitness thing really started. I ran every day to lose the weight I’d been carrying from my party years. Deep inside, I knew talent wasn’t enough, I had to make some sacrifices.”

The Eight Hours may have put him in hospital, but it had given him a boost.

“I’d shown I could do it on a four-stroke, not a problem. To me, Rainey was the man on a 500, and I’d been pulling away from him, and I’d been faster than Gardner and Kevin Magee [Rainey’s 500 team-mate]. It was some light at the end of a long, dark tunnel. I knew I could be fast when I understood the machine; I just had to come to terms with the 500.”

Mick Doohan returned to action for the season-ending Brazilian GP at Goiania, where he’d had his only bit of fun on the NSR during preseason testing. He impressed the hell out of the paddock by executing perfect sideways corner exits on his way to fourth, behind Schwantz, Lawson and Rainey.
“I also beat Gardner, and that was a big motivation for me. I was doing the sliding because it was fun, but also because I could feel where the bike was at when it was sideways. At last, I was getting some feel.” 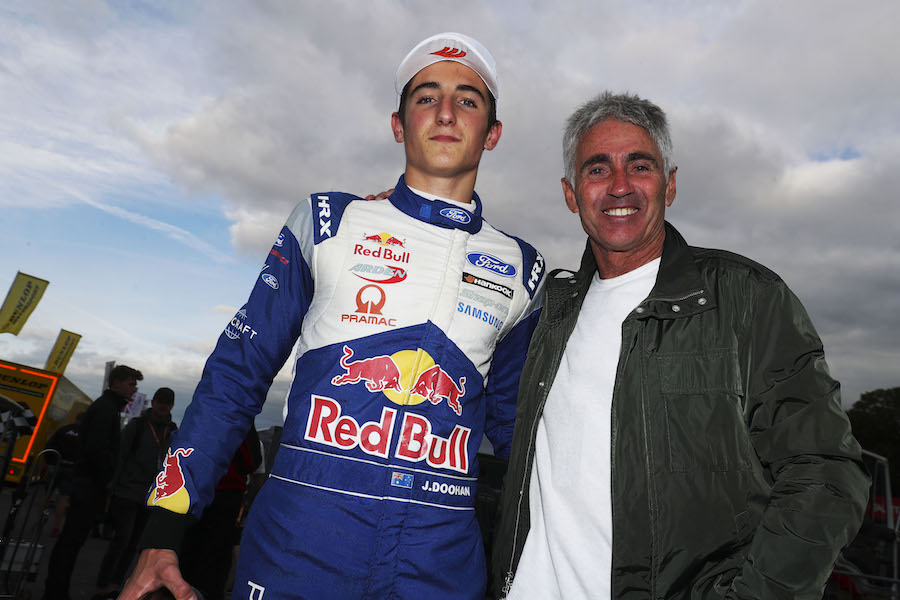 Doohan was a different man in 1990, and the NSR was a different bike, with a revised cylinder-firing configuration to improve feel and traction. He won his first GP in Hungary in September, and for the following year, he rewrote his Honda contract: no bonuses for second- or third-place finishes, but much bigger bonuses for victories. By the time he retired in 1999, he had won 54 GPs, making him the first rider earning £10 million per season, and secured five consecutive premier-class world titles, an achievement matched only by Valentino Rossi and Giacomo Agostini.

“I earned it,” he says. “Honda wanted to win, and we were winning. I don’t think I let anyone down – spending two dollars to win is a lot better than spending one dollar to lose.”

Mick Doohan used his earnings wisely. His current business interests focus on corporate jet sales and management – last year, his companies sold $2.4 billion worth of jets. He also mentors his 16-year-old son Jack, who finished top rookie in the 2018 British F4 car championship and is signed to the Red Bull Junior Team with a clear ambition: to win a Formula 1 world championship.