Toby Price’s victory heralds a new epoch in Dakar history – now that the scale of the achievement has sunk in, the 2016 Dakar champion looks back on the race

For the past decade Dakar has been fought between Cyril Despres and Marc Coma or, if you’re a Catalan, Marc Coma and Cyril Despres. Predictions about any alternate contenders were always preceded by an if a but or a maybe, and there was never any serious money wagered on anyone other than the KTM Red Bull teammates (though there was never any certainty about the ‘mate’ bit). Then Despres decided to follow in Stéphane Peterhansel’s tracks while Coma took on the responsibility of Dakar Route Director; he came on board too late to have any great influence on the 2016 event. On Coma’s retirement KTM quickly confirmed its line-up: Jordi Viladoms, Matthias Walkner, Toby Price and Sam Sunderland. They also added Antione Méo. The new Husqvarna outfit grabbed Ruben Faria, Pablo Quintanilla and enduro star Pete Renet while HRC Honda stuck to its 2015 line-up with Joan Barreda, Paulo Gonçalves and Michael Metge, adding rookies Californian Ricky Brabec and Argentinean Kevin Benavides. Forever the flyer of the blue flag, Hélder Rodrigues was the only Yamaha stalwart likely to worry the factory teams and, on New Year’s Day 2016 the world’s leading bookies had him at 4 to 1; you could have written your own odds on anyone not listed. But among the main contenders there were no standout favourites. Come race-day, Price (who was certainly our favourite over the Europeans) was adamant: “There are definitely no team orders. We’re all free to run our own race. At least until the rest day and maybe the team will reassess then.”

By that time the situation had changed substantially. Sunderland was a nonstarter, Barreda was out with mechanical problems, Faria had broken his wrist and Price’s teammate Walkner had busted his femur. Quintanilla was hanging in on the Husqvarna but for some reason Rodrigues was struggling to get up to pace. So, come the rest day there was absolutely no need for team orders – it was Price on KTM vs Gonçalves on Honda. Toby Price (AUS) from Red Bull KTM Factory Team at the bivouac of stage 6 of Rally Dakar 2016 from Uyuni to Uyuni, Bolivia on January 8, 2016.

Seventh out of the bivouac, Price came off the rest day like a cut snake, slicing his way to the point with a perfect display of speed and, despite a few hiccups, an ever-mounting mastery of navigation. In a valiant effort to maintain his ascendency, Gonçalves suffered an almighty endo in the camelgrass but quickly bounced to his feet to finish the day in second; though he was a picture of stoicism for the cameras, it was obvious he would spend the next stage nursing his bruised body.

After winning Stage Eight, Price was first out on Stage Nine – the first part of a marathon – and seized the opportunity to establish an indomitable lead over Gonçalves, his only remaining rival. At the same time Price was intent on issuing notice to the tough Slovakian veteran Stefan Svitco, as well as seeing off local hero and Honda rookie Kevin Benavides. At the first control point Price had put three minutes on Svitco, Gonçalves and Benavides. By the second, he had seven minutes over Benavides, the rest of the field strung out in a distant conga line of wavering mirages. It was not yet 10 o’clock and already the temperature had hit 40°C. Of course Price had no idea his teammate, Antione Méo, had picked up a piece of timber in his front wheel and crashed. Gonçalves had a similar run-in with a creosote bush that holed his Honda’s radiator. Both were unfortunate circumstances on a virtually treeless moonscape. Up front Price had the universe to himself. “It was really difficult navigation and there was one 15km stretch across no man’s land on a 140° bearing,” he says, remembering the race. “A degree or two variance over that distance and you’ll never find the waypoint without endless searching in ever increasing circles. To follow a constant bearing through the tight moguls and clumps of camelgrass is tough work; it’s impossible to describe just how difficult it is.” Yet Price found that waypoint – as well as several others that had never been revisited since Etienne Lavigne and Marc Coma set the course last spring. The temperature had hit 47°C when Price rode into the final control. “I was dehydrated and the bike was cooking. I expected no more than to rehydrate, to be refuelled and be gone on the liaison to the marathon camp.” But then there was the inevitable TV camera. When interviewed, Price was a master of diplomacy. “It’s been a good day. I can’t complain. I get to the finish to find they’ve cancelled the stage. That’s a bit of a shame. And a bummer for me.”

Fried on the outside and boiling inside, the Aussie was royally pissed off. “It was a real kick in the guts even though I couldn’t quite comprehend what the overall implications were. But you can’t lose your cool and you’ve got to be sensible about what you say on TV. As soon as the camera was turned off and I could front a marshal the words changed a bit.”

Not being bilingual, however, can be a disadvantage. “When you explain something to someone and they turn to their colleague and start speaking Spanish or French you have no idea what they’re talking about. It does get a little disconcerting. What annoyed me was that I’d put in a big effort and made a lot of time on everyone that day. I was told the stage was canned at CP2 and that another nine riders made it through to the 255km mark before they were stopped for safety reasons. So effectively everyone else was lolling around in the shade enjoying a cool drink while I’m cooking out on the dunes. My bike was hammered 120km more than anyone else’s in hard and shit conditions on the first day of a marathon. “The way I saw it was that I’d received a penalty that had the potential to stuff our race and give other riders a big advantage. Particularly Gonçalves whose bike wouldn’t start at CP2 and had to be towed out. He pretty much just won Lotto. If it had been 10°C cooler and Gonçalves was obliged to finish the stage he’d be out of the event. Now, I don’t want to win races that way, but sure as hell if it was me in that situation the Honda team would have the same attitude. After all, Gonçalves was a threat to us and we were a threat to them.

“What I can’t understand is that with eight choppers and only one rider out on the course, why they couldn’t drop a chopper on top of me and wave me down. That evening, my team was right behind me, knew how pissed off I was and knew exactly how I was feeling. But despite everything we were still in the lead.”

A new day, the second of the marathon, and the Red Bull KTM Team was in a commanding position with Price in the lead and rookie Méo threatening to grab a podium. Nothing new for the KTM crew, only this time it was the laid back Aussie dominating proceedings, not Despres or Coma. And like his predecessors, Price had nothing to prove. “It’s very rare for the first rider out in the morning to finish by winning the day,” says Price. “Any hesitation on the navigation and the following riders eat into your lead. You may cross the finish line first, but for sure someone behind you will set a faster time. When I returned to the bivouac back on Stage Six I could tell the team was as pumped as I was. That stage demonstrated I could do the job alone, taking absolutely no notice of any other riders. I doubt I’ll ever be more satisfied than when I finished Stage Six.”

Then despite the travesty on Stage Nine, Price proved he could repeat the performance in even tougher conditions and come out smiling – well at least gritting his teeth for the TV cameras. Now it was time to consolidate and for Price to continue his part in securing the KTM team’s 15th Dakar victory. It was almost an anticlimax.

Having given his bike a real caning in the Fiambalá dunes, Price turned the wick down on Stages Ten and Eleven which allowed his teammate – and the bloke he’d been sharing digs with for the past fortnight – to win his second stage of the event. Méo was thus first on the road for the penultimate stage but fell back under team orders to shadow Price to the end of the day. Both Price and Méo had unexpected trips to the boonies because of the skatey surface, however, while Price survived, Méo crashed and lost several positions.

“For a couple of days I felt that I could take the victory,” recalls Price, “but those two offs and the erratic spectators really showed that anything could happen. The final stage was less than 200km though it seemed to take forever. The only time I felt confident of victory was when I was about 2km from the finish and knew I could push the bike home.”

Price’s epoch-defining victory signals that the heroes of the past are just that. The future belongs to the new wave of speedsters: Price, Sam Sunderland, Matthias Walkner, Antione Méo, Kevin Benavides, Ricky Brabec, and possibly some unknown who’ll drop from the clouds. Thanks to Toby Price, that unknown is just as likely to be an Aussie as someone who lives within a stone’s throw of the Mediterranean.

For now it appears Price’s teammates are his biggest threat to a World Cross-Country Championship and a repeat at Dakar. But already everyone is aware there’s absolutely nothing to be gained by making the bloke angry. 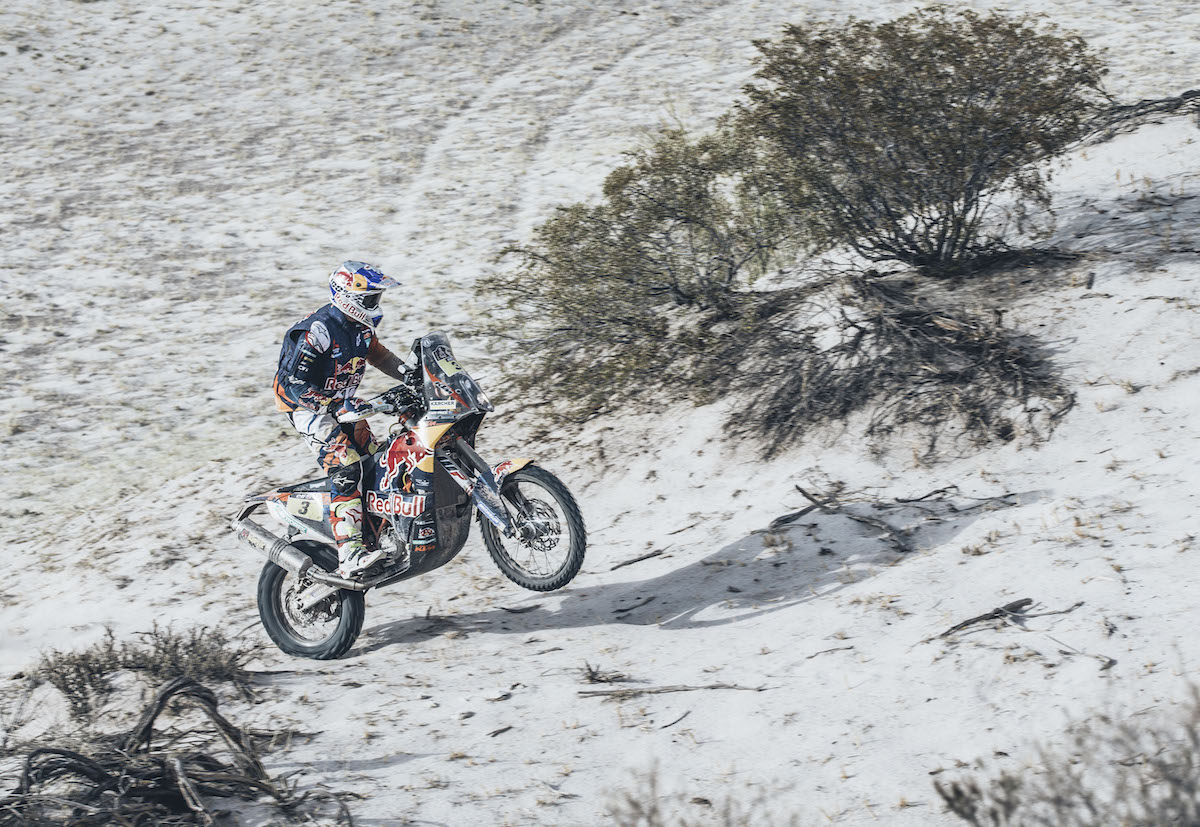 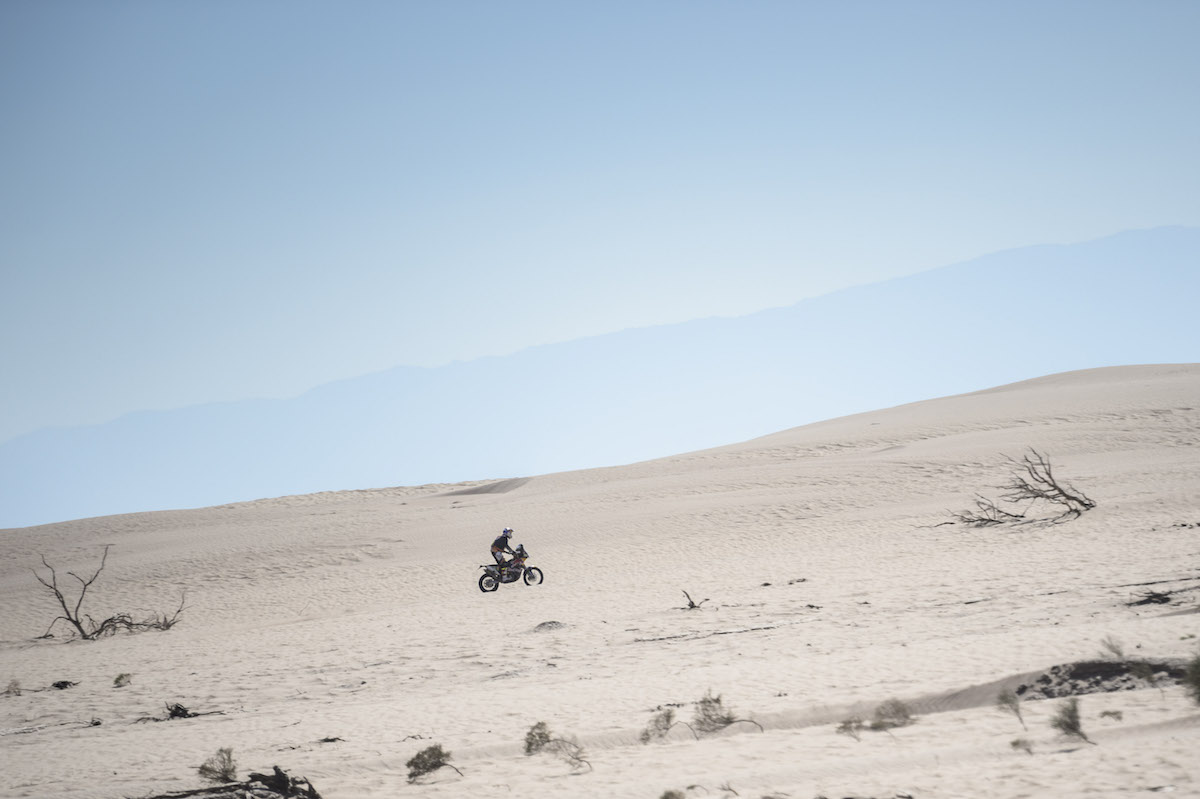 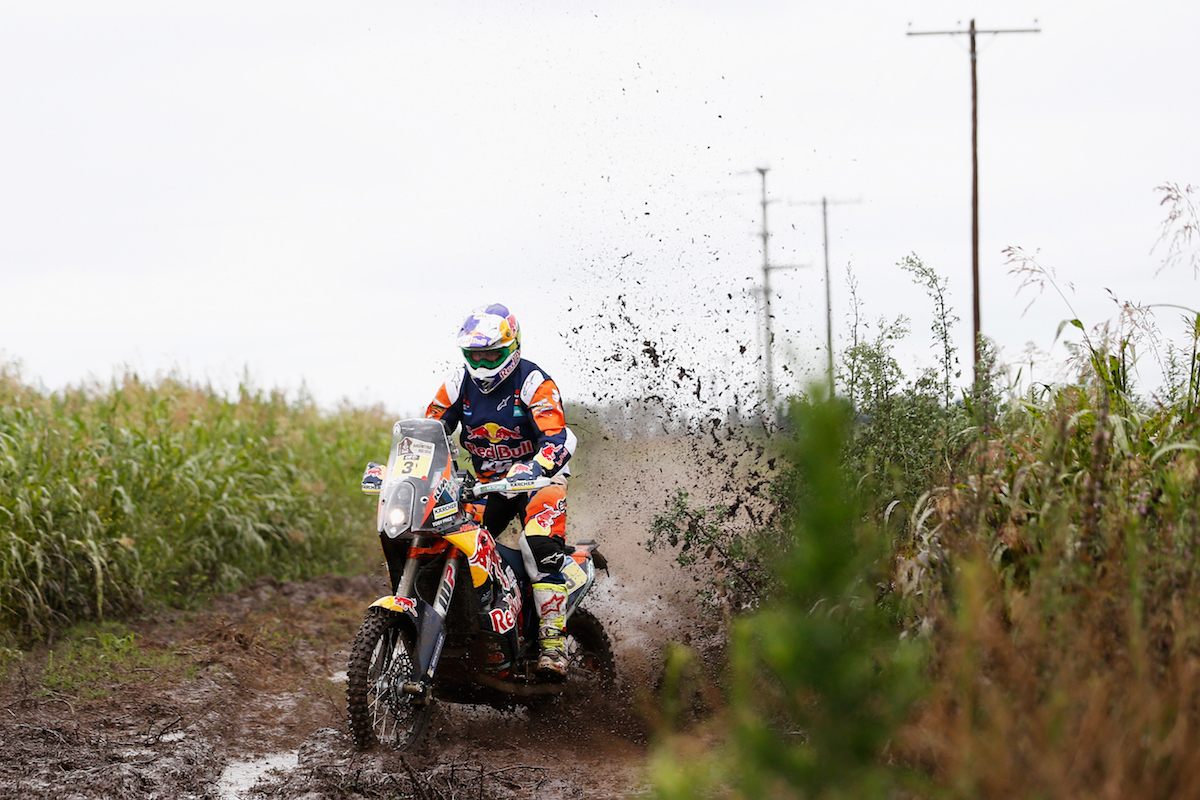 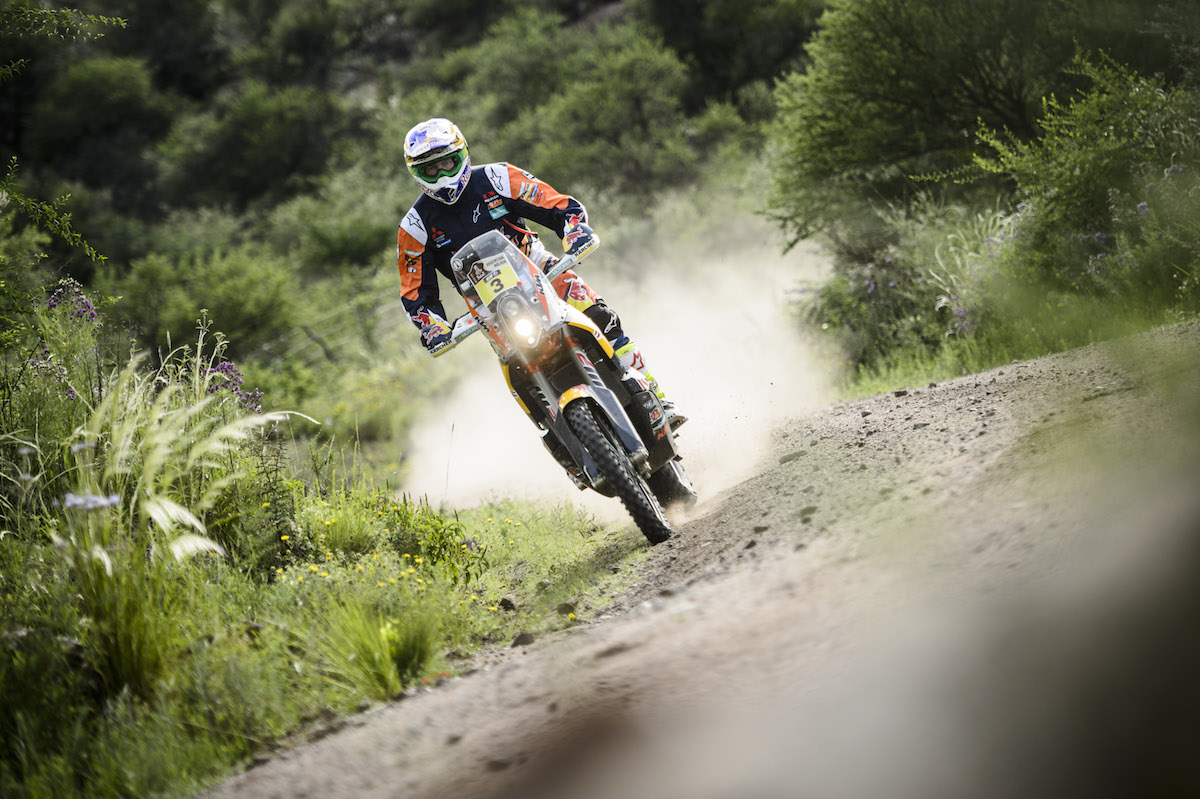 The Toughest Horse in the Stable

Obviously, Toby was delighted with his Red Bull KTM 450 Rally. No, this one’s not a replica and, having won Dakar, could never be replicated. But the fact is Toby’s machine covered more country and did it faster than any other in the 2016 Dakar – over 9300km, some of it above 4700m and much of it in temperatures above 47°C. Other than on the two marathons, the tyres and special compound Michelin mousses were changed daily, as was the Motorex oil. And the Kato was always perfectly pressure washed courtesy of Karcher. There’s your sponsors covered mate! Elf supplied the fuel required for each day’s competition. The fuel load is not measured as precisely as in, say, Formula One, but the crew carefully check the following day’s distances each evening and only provide the fuel load to get the job done – plus a safety margin which, in Toby’s case, was never needed.

“It’s a great record to achieve,” says Toby, “9300km and all we replaced was the clutch which, when you consider the sand dunes and camelgrass you don’t see on TV, proves tremendous quality, reliability and immaculate preparation. My mechanic, Joe (Johannes Fahrner) was on the case every night but other than the precautionary clutch replacement we made it from Buenos Aires to Rosario without a single hiccup.”