Crash statistics can tell you a lot about a rider and how he’s gelling (or not) with his bike. AMCN investigates why some MotoGP riders crashed more this season, while others didn’t

That famous old racing saying “If you ain’t crashing you ain’t going fast enough” is half truth and half nonsense. Yes, you need to find the limit, but you won’t get very far if you keeping stepping over it.

Every racer needs to find the limit, especially MotoGP riders. In the fastest, most technically challenging championship of all, the difference between winning and losing is tighter than ever, which is why there are now more crashes than ever.

Since 2006 there’s been a general increase in the rate that MotoGP riders throw themselves at the scenery – from 98 to 215 last year. That’s an astonishing increase of 120 percent, and in an era when electronics were supposed to have made racing safer.

So what’s going on? It’s the strength of the competition, simple as that. When the front row of the grid is covered by a few tenths and race finishes are so tight, riders have no option but to lay it on the line, every corner, every lap, so it’s no surprise they end up flailing around in gravel traps. 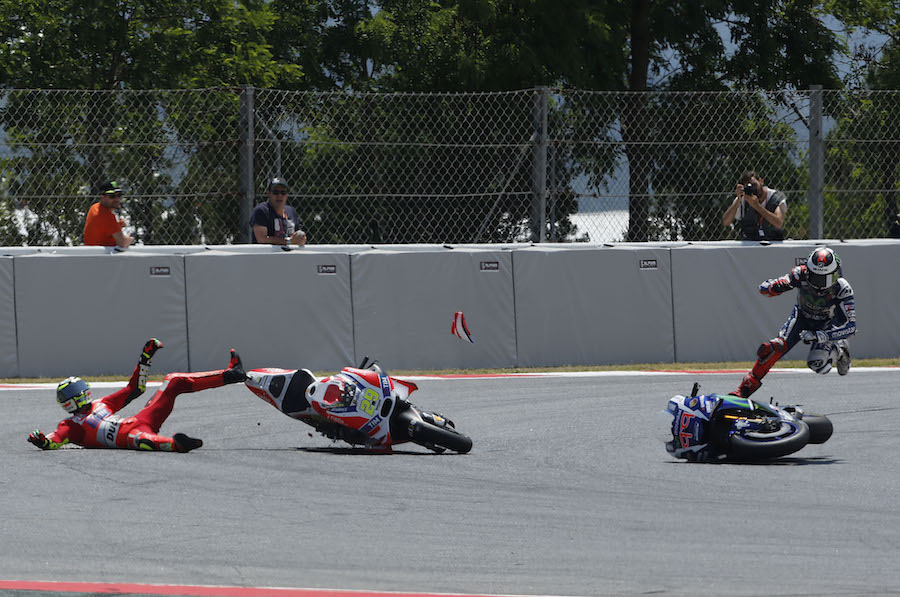 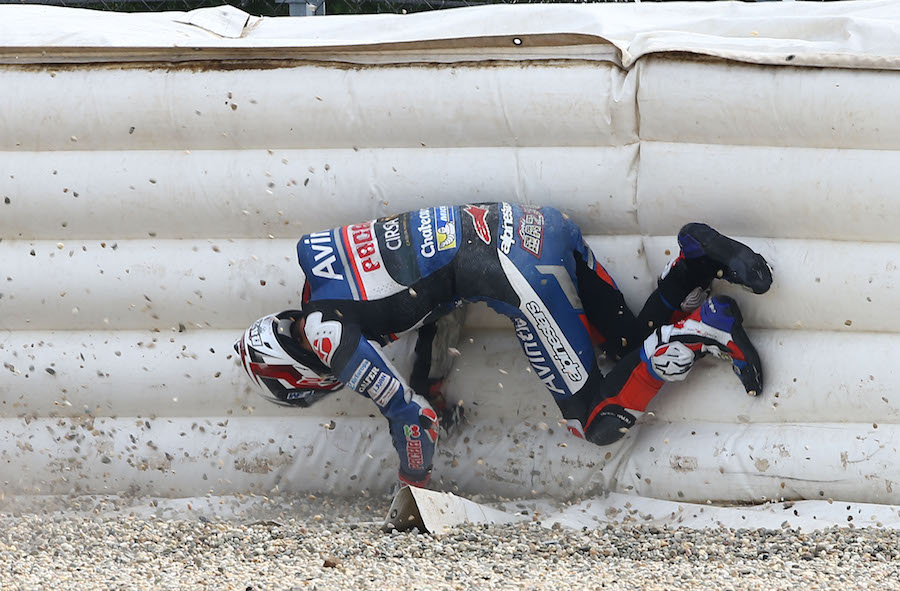 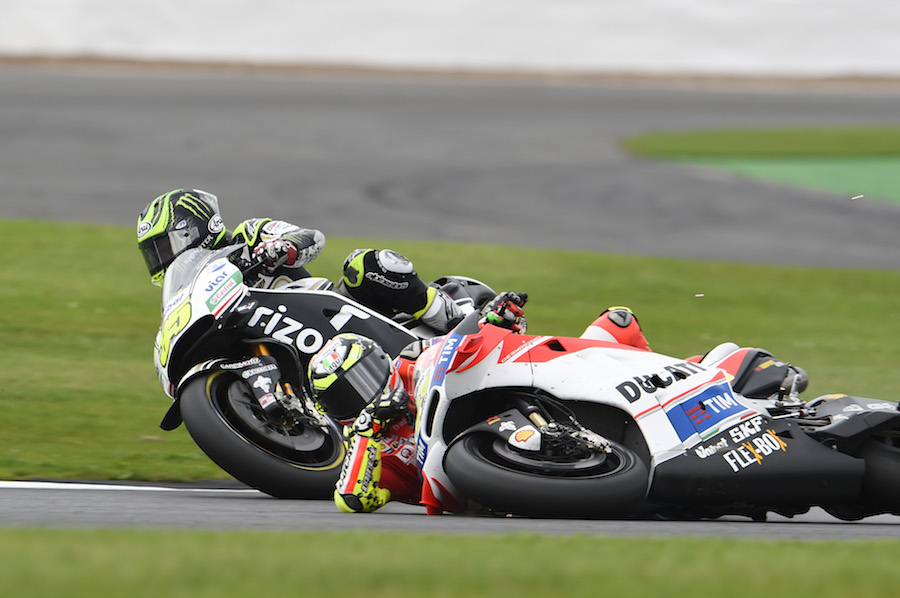 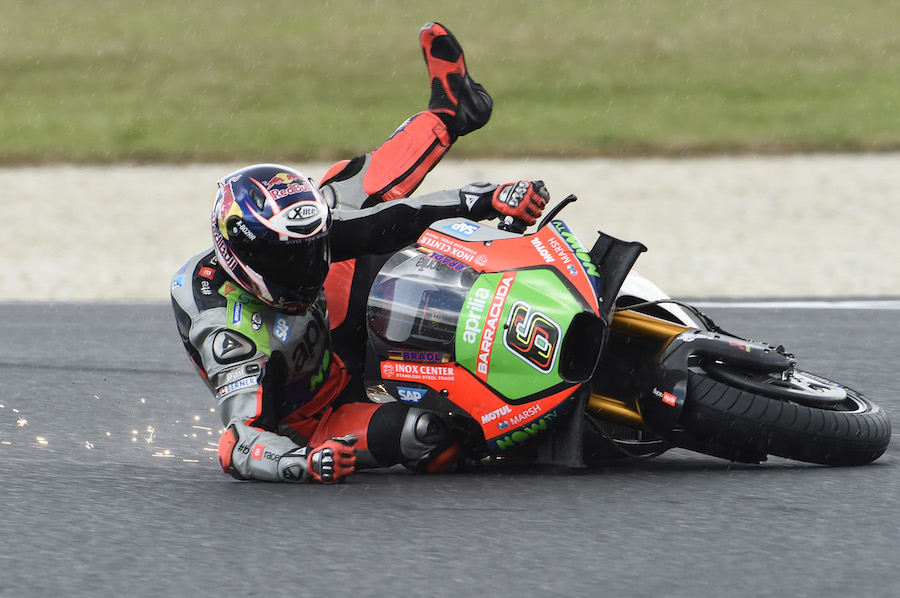 And what about this year? How did the move from Bridgestone to Michelin (and the switch from tailor-made factory electronics to same-for-all rider aids) change things? Comparing eight 2016 Grands Prix with the same races last year staged in similar weather conditions, the crash total rose from 97 to 120.

Michelin’s return to MotoGP after seven seasons put them on a steep learning curve, and many of their R&D sessions during 2015 and into pre-season were affected by bad weather, so they went to some tracks with no previous knowledge of the layout or the asphalt. There’s also a huge difference between designing tyres for endurance racing and creating tyres for a no-expense-spared Grand Prix bike.

Speed-wise, Michelin has bettered one lap record, equalled another and been a second off Bridgestone’s pace at a couple of races. Their worst GPs were Argentina, where 16 riders lost the front into turn one, and Le Mans, where seven riders lost the front into turn seven. Both these corners feature bumpy entries, which unsettle the front suspension and overload the tyre. Also, the turn two right-hander at Aragon – where nine riders fell this year – was a nightmare in cool morning sessions because it comes 41 seconds after the previous right.

But Michelin made progress. At Jerez there were only two crashes all weekend compared with 14 for Bridgestone last year, and at Catalunya there were 12 compared to 18.

Of course, it’s not so much the crashes that count rather than the injuries. At these 16 events from 2015 and 2016 there was remarkably little suffering in the MotoGP class. On just five occasions riders were declared unfit to ride following accidents: Cal Crutchlow with an ankle injury at Mugello 2015; Karel Abraham with a foot injury at Catalunya 2015; Tito Rabat with a broken collarbone at Mugello this year; Loris Baz with broken toes, also at Mugello; Alex Lowes with a badly swollen foot at Aragon.

The current injury situation is a lot healthier than it was in 2010, the second year of Bridgestone control tyres, when a too-stiff rear slick construction caused many riders to lose control on the brakes and suffer corner-entry highsides, resulting in numerous broken bones and trashed bikes.

The story of the 2016 MotoGP season revolved around how riders and teams adapted from Bridgestone’s front slick to Michelin’s.

Against all predictions, the man who adapted best was Marc Marquez, who crashed no more than last year. Also against expectations, Jorge Lorenzo adapted worst, crashing five times as often.

Bridgestone’s front slick had been an astonishing tyre. Riders talked of its servo effect; the harder they braked into corners, the more the tyre gripped because the extra load expanded its contact patch. No one had ridden anything like it.

Michelin’s is more like a normal front slick; if a rider overloaded the tyre into a corner, it lost grip and he likely crashed. Initial tests at the end of 2015 and in early 2016 saw way too many riders crash going into corners. They complained of insufficient front grip and also of too much rear grip, which multiplied their front-end woes. But Michelin improved the front so much during the season that some riders said they could use the same corner-entry technique they used with the Bridgestone.

Marquez struggled at first, as everyone had expected. More than any other MotoGP bike, Honda’s RC213V was designed around the Bridgestone front, giving him a winning advantage into corners. During winter testing he crashed a lot, so he tried to smooth his aggressive riding technique to stress the tyre less. This didn’t work, so he went back to his wild style and used his abilities to adapt. Marquez rode the knife edge like a magician, loading the front tyre more than anyone else with his brick-wall braking style.

The Spaniard also benefitted from the fact that, while Bridgestone took just two different fronts to each race, Michelin brought three, sometimes four. With so little experience of the tracks, Michelin often had to guesstimate compounds, and were also developing their fronts race to race. The constantly changing character and compounds, and the greater-than-usual choice of specs, had all teams struggling to find a direction with set-up; when the front tyre changes, everything changes. So one weekend one team and rider would get it right and the next weekend it would be another, hence this year’s unpredictable racing. 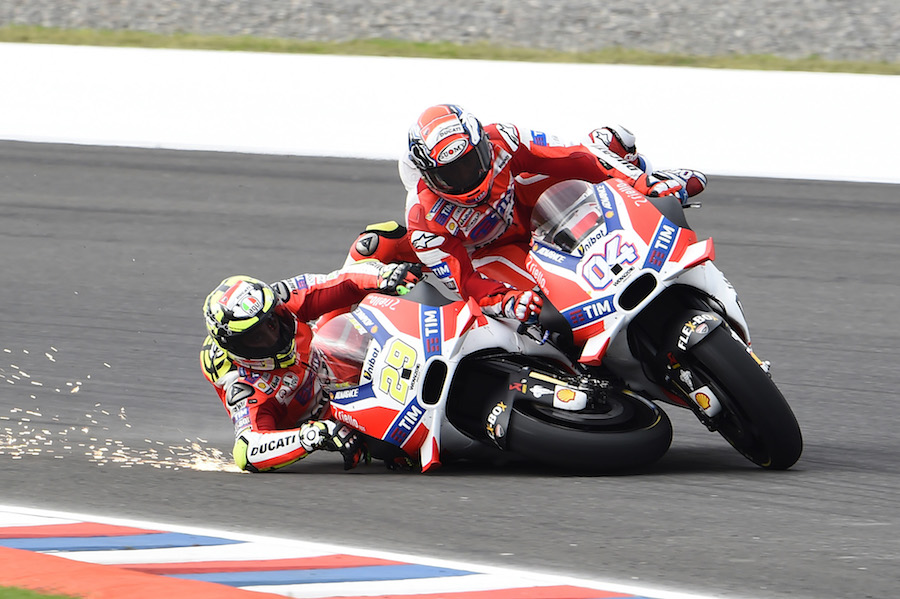 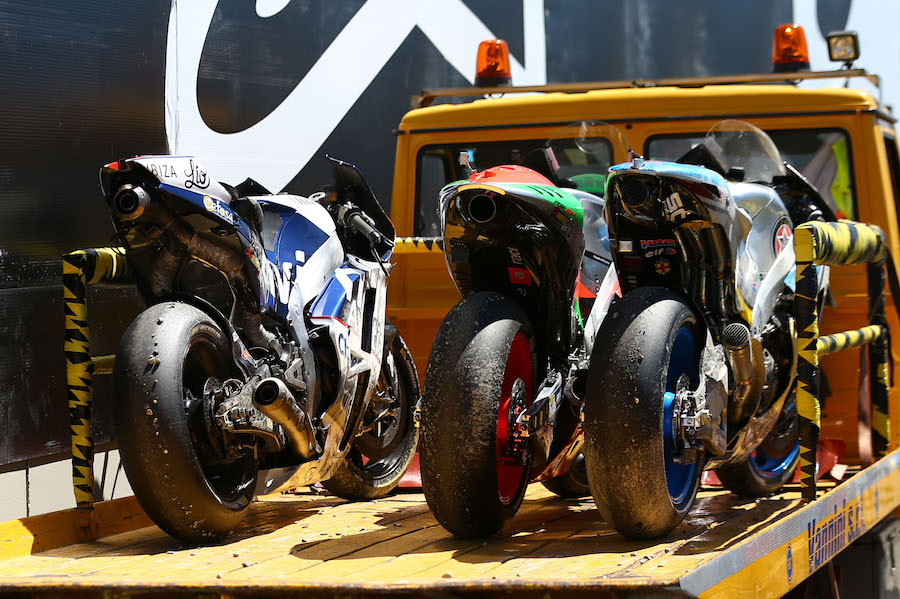 Marquez is perhaps the only rider who found a clear direction with set-up because he’s an animal on the brakes and therefore needs the hardest front tyre available. And because he always chooses the hardest tyre, his crew wasn’t flailing around trying this, that and the other. He could concentrate on getting the very best out of the hard front.

On the other side of the Repsol Honda garage, it was all doom and gloom because featherweight Dani Pedrosa spent much of the season struggling to get enough heat into either the front or rear. His results dived and he crashed more than he’s ever done. A major set-up tweak late in the season put him back on the right road and at Misano Michelin offered a stiffer-construction front to deal with the track’s heavy braking, which worked perfectly for Pedrosa and allowed him to dominate the race.

In the Movistar Yamaha pit, the mood most likely depended on the weather. Yamaha adjusted the M1’s geometry and fitted stiffer fork springs to minimise the stress on the Michelin front. This set-up worked well on sunny days – Valentino Rossi’s wins at Jerez and Catalunya and Jorge Lorenzo’s victories at Le Mans and Mugello were all achieved on hot tracks – but when track temperatures plunged, neither rider could get enough heat into the front tyre, hence their disastrous showings (Lorenzo especially) at Assen and the Sachsenring. Lorenzo’s crew tried adjusting the set-up to put more load on the front but this inevitably reduced load on the rear, so his better corner-entry grip was cancelled out by lots of corner-exit wheelspin. “The riders are superhumans, but they do feel pain”

Dr Michele Zasa is the man in charge of fixing injured MotoGP riders, having succeeded Claudio Costa. Zasa previously worked with the East Anglia air ambulance service, bringing pre-hospital emergency treatment to accident victims. He has also worked in Africa and the Antarctic.

“In MotoGP I have two lives: one is the rush of adrenaline I get when I reach the side of a rider who’s had a bad crash; the other is my job inside the Clinica [Mobile], which is a bit like being a normal doctor, helping riders with flu and gastroenteritis, as well as with broken bones, dislocations and so on,” Dr Zasa says.

“I have the most beautiful job in the world, but also it can be a terrible job. When I worked with the air ambulance I’d get to the accident site, where people had very bad injuries and could die, but I didn’t know them, so I just used my training and did my job.

“Here in MotoGP it’s totally different. I was there with Marco Simoncelli after his accident and with Luis Salom in the hospital resus room after his crash; it was really, really bad. I started working in the Clinica in 2011, so I’d only known Marco for a few months, but I knew Luis very well. Over six years we grew up together as rider and as doctor. He was always in the Clinica, always joking.

“I know the riders are superhumans, but they do feel pain and they don’t want to feel it. Even if they have a higher pain threshold, when they break five bones, for sure they feel pain. Adrenaline helps a lot… when they get on the bike the rush of adrenaline overcomes the pain, at least until they stop riding.

“The best riders are the most motivated – when they get hurt they don’t take a month off, instead they wait five minutes and want to get back on the bike. Their talent makes them champions, but their motivation to let pain and other problems pass them by is vital.

“MotoGP is dangerous, but the older the riders get the less risks they take because they get wiser. Valentino almost never takes excessive risks, unless it’s absolutely necessary. Jorge took a lot of risks when he was young but now he is much more consistent and always considers the risk. In MotoGP you can’t just be fast and talented, you also need to be smart.

“I don’t think many of them think about getting injured, otherwise they’d have to stop. They are fatalistic; if it’s going happen, it’s going to happen. You can have a bad accident on the way to work. At least here they are doing what they love.”