ERIC ‘DEBBO’ DEBENHAM | He did what?

A congenial giant in the pits, a terror on the track

Whenever Debbo’s name crops up the first recollection is of his tremendous laugh and, in an era when short circuit racers enjoyed regular meetings at Vineyard, Taree, Goulburn, Bungarribee, Salty Creek and Nepean, Debbo had good reason to laugh. Invariably his 190cm tall frame would dominate the podium and, if not, there was always something to laugh about for the larrikin from Sydney’s Chipping Norton.

Debbo contested the inaugural Australian Short Circuit Championships on a property near Junee, where seasoned campaigner Ray Curtis recalls Debbo was disappointed with his third placing, such was his determination to win. Which is exactly what he did 12 months later on the same circuit, becoming the 1958 Australian champion.

Running his own haulage business while travelling to races from one end of the state to the other proved too demanding, and Debbo switched to powerboat racing on Georges River – just over his back fence. Debbo proved just as adept behind the helm of his Jaguar-powered hydroplane as he had behind the ’bars of his BSA, winning back-to-back championships in 1963 and ’64. Later, when he suffered the misfortune of sinking the hydroplane after hitting a marker buoy, he gave the boats away.

Folklore has it that Keith Corish conceived the Corish-Vincent when watching Tony McAlpine’s Vincent Black Lightning clash with Harry Hinton’s Manx Norton around Mount Panorama in the 1950s. Though it wasn’t until a decade later that Corish stuffed a race-prepared Vincent C Series powerplant into a Norton International frame suspended on an amalgam of Norton and BSA brake and wheel components. This, or something like it, was what Corish presented to his old mate Debbo with the proposition that he was just the man to tame the beast. 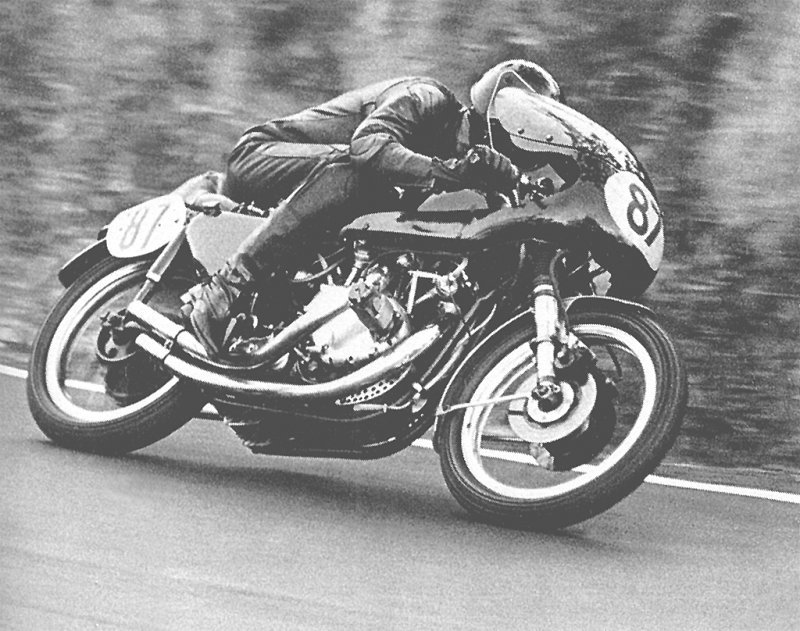 Debenham and the Corish-Vincent were a fearsome combination

The first real test came at the 1967 Bathurst TT meeting on Mount Panorama. In an unimaginably large field of over 200 riders contesting the Unlimited ‘C’ Grade race, Debbo started 27th and, setting fastest lap along the way, blasted through the field to finish third. Despite fading brakes, the Corish-Vincent was almost a winner.

Back at Mount Panorama the following year, the Corish-Vincent, now with securely routed front brake lines, was a proven winner. Taking two full seconds off the outright lap record Debbo enjoyed a comfortable win in the unlimited ‘B’ Grade race but reported the bike had lost its edge.

Sure enough the timing was retarded and, with that rectified, Debbo took on the Unlimited Grand Prix. A little slow to begin, Debbo soon shot to the lead with another new lap record, helped by a top speed of 265km/h down Conrod Straight. Unfortunately after adjusting the timing, the float bowl had not been secured correctly and while Debbo could ride around that problem, excessive clutch free-play meant the best he could do was limp home to second place in a race marred by attrition.

Frustrated by continuing problems, Keith sold the bike to concentrate on his printing business and enjoy club outings on his Ariel. Debbo was left without a ride but with a wealth of knowledge on how to build a race winner. Using components imported from as far as Eastern Europe and Argentina, and with a little help from fellow Bankstown-Wiley Park MCC member Tony Gill, Debbo constructed a much improved replica of the Corish-Vincent, though the only thing retained from the original was the now famous racing number 87. 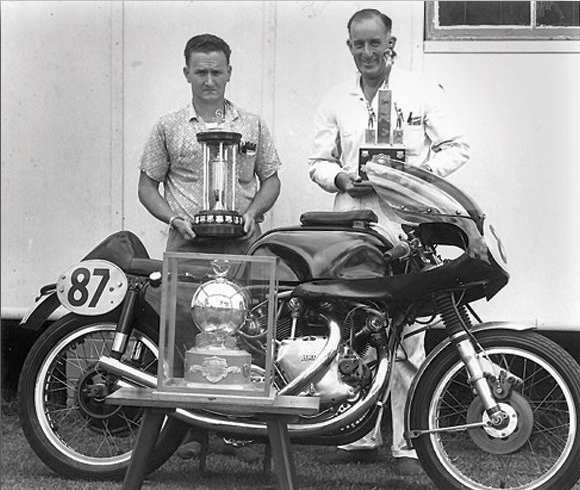 At 190cm Debbo towered over the opposition

Now an ‘A’ Grade rider, Debbo continued to campaign the bike at open meetings but found it uncompetitive against machines such as the Yamaha TZ 700 two-strokes.

This didn’t unduly concern Debbo, who, now well into his 50s was happy to race in club events where clad in his old-school one piece leathers, he was always welcome for his good humour and the distinctive sounds of his laughter, which often exceeded the open exhaust of the big black #87. The Debenham-Vincent helped make Debbo the most universally popular competitor of the era.

Debbo was never anything less than full gas and, when the Vincent jumped out of gear at an Amaroo Historic meet in the early 1980s, throwing him into the fence at the start of pit straight, Debbo’s laugh wasn’t as heartfelt as usual. Another fall at Lakeside and he parted ways with the #87 Vincent, this time permanently.

Many years later, Debbo took a guest ride on the Ken Lucas-built Norton Vincent, but he couldn’t quite come to grips with it around the Mount Gambier Circuit. Though at 78 years old most would have been happy with a podium, he was disappointed and donated his racing leathers to the National Motor Racing Museum at Bathurst.

He may have ceased racing but he continued to rally his 1956 ES2 Norton until his final chequered flag fell in May, 2015. 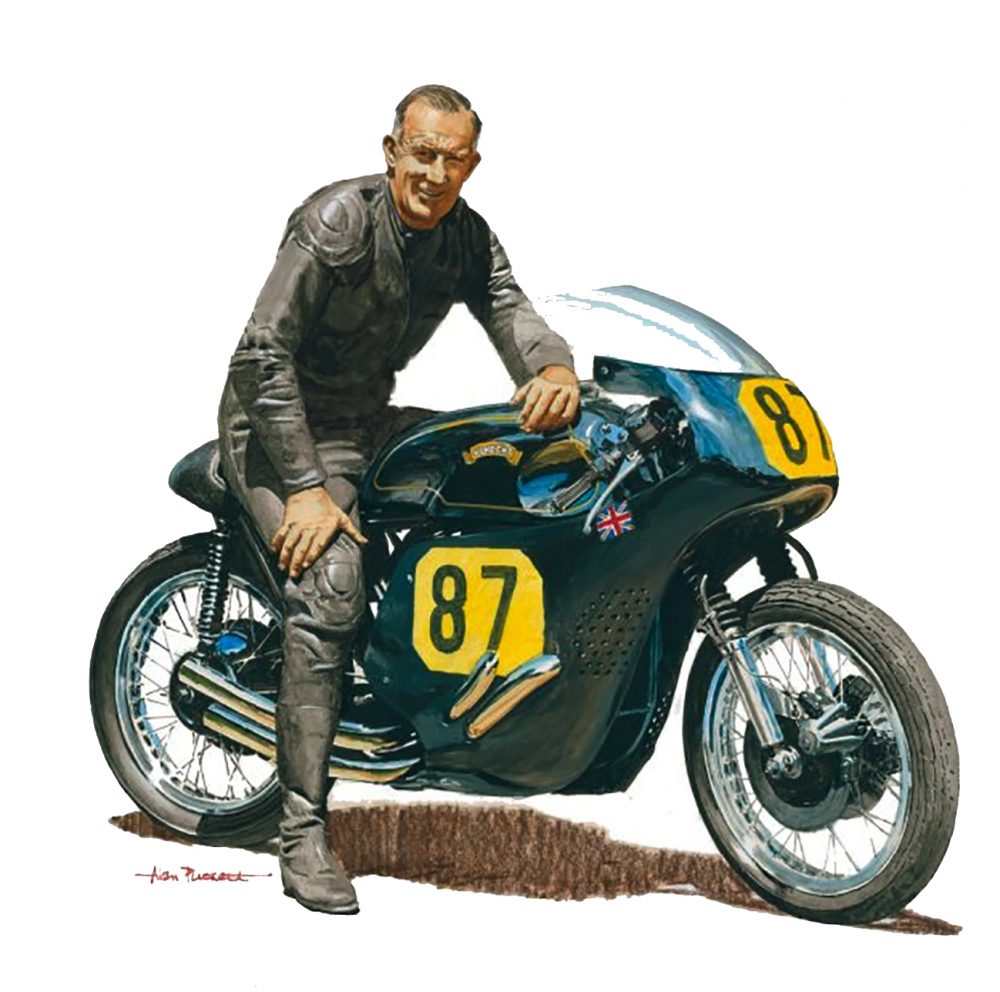