Ducati has unveiled the technical details of its MotoE project in a video in which the prototype is illustrated by the team that has overseen its creation.

The Ducati MotoE is the manufacturer’s first electric motorcycle, and starting in 2023 will compete in the FIM MotoE World Cup, with the Bologna-based motorcycle manufacturer the sole supplier of the 18 bikes on the track during each race weekend.

The MotoE project has strategic relevance for Ducati since it makes it possible to develop expertise for the future while maintaining the approach that has always fuelled the DNA of the Bologna-based manufacturer: experimenting with technological solutions in the world of racing and working to ensure that everything that is developed in this area can then transfer to motorcycles for you and me. 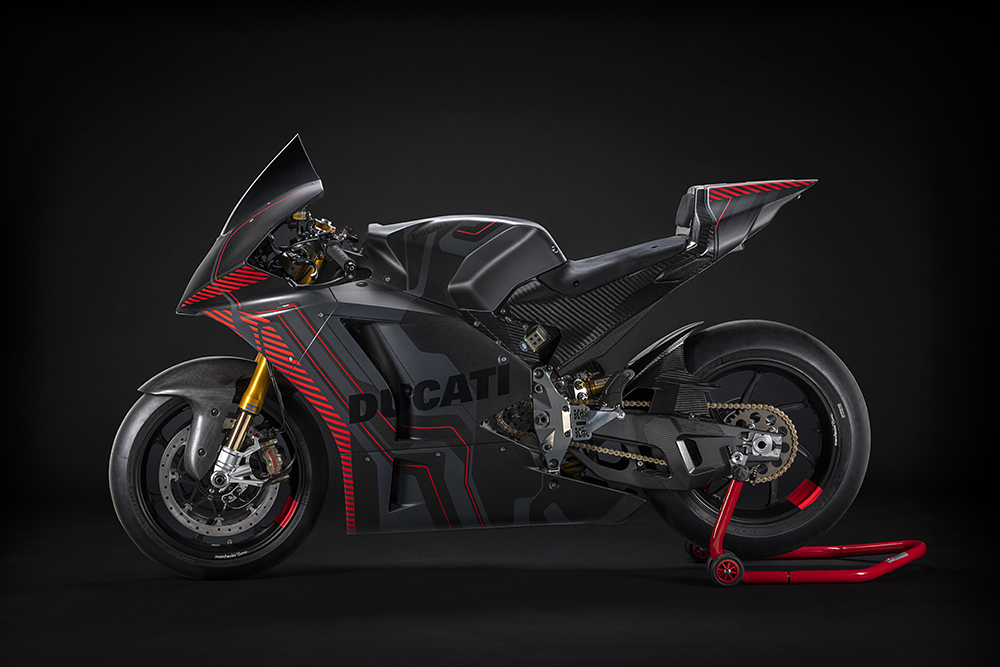 Claudio Domenicali, Ducati CEO: “A few weeks ago I had the extraordinary opportunity to ride the Ducati MotoE on the track and I immediately realized that I was living in a historic moment. The world is going through a complex period and environmental sustainability is an element that all individuals and all companies must consider a priority if we want to preserve the delicate balance of the planet. As Ducati, we have grasped this need and we went in search of a challenge that would allow us to contribute to the common goal of reducing CO₂ emissions and at the same time to keep faith with our DNA linked to racing. We agreed with determination to develop the most performing electric racing bike that current technology makes possible and to use this project as a laboratory in which to build our future. The result we have achieved is surprising. As soon as I sat on the bike I realized the quality of the work done by the team and when I returned to the garage I felt a deep sense of pride for what we were once again able to achieve.” 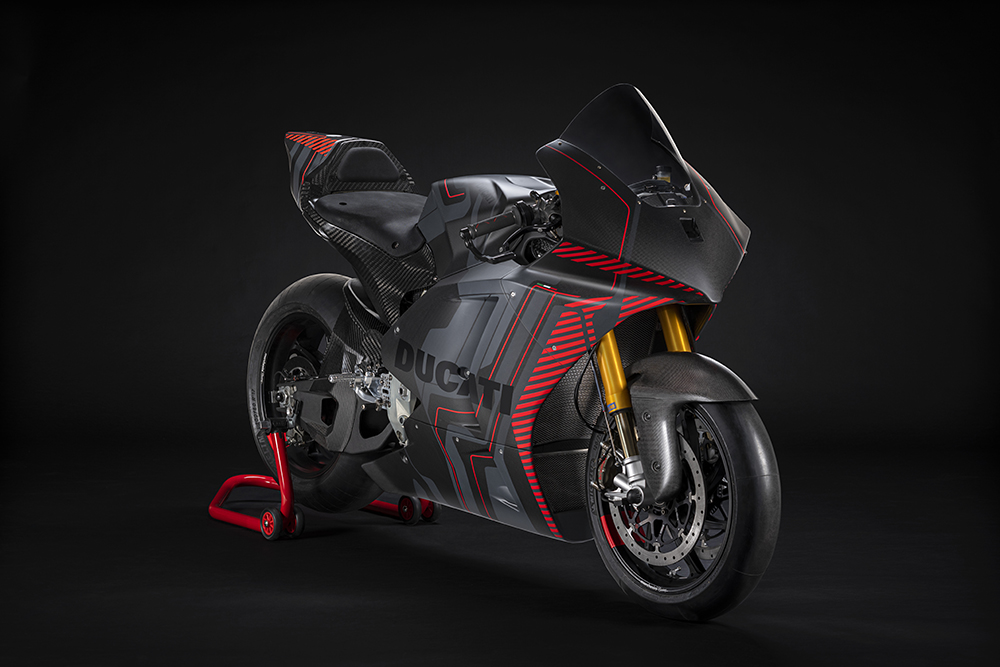 To produce the MotoE prototype, the Bologna-based motorcycle manufacturer put together a team that unites Ducati and Ducati Corse designers, creating a truly extraordinary mix of skills. The creation of the bike followed the procedure that is usually adopted for production bikes, triggering a close collaboration between the members of the team that led to new ways of thinking and designing, encouraged by such a technologically challenging project. 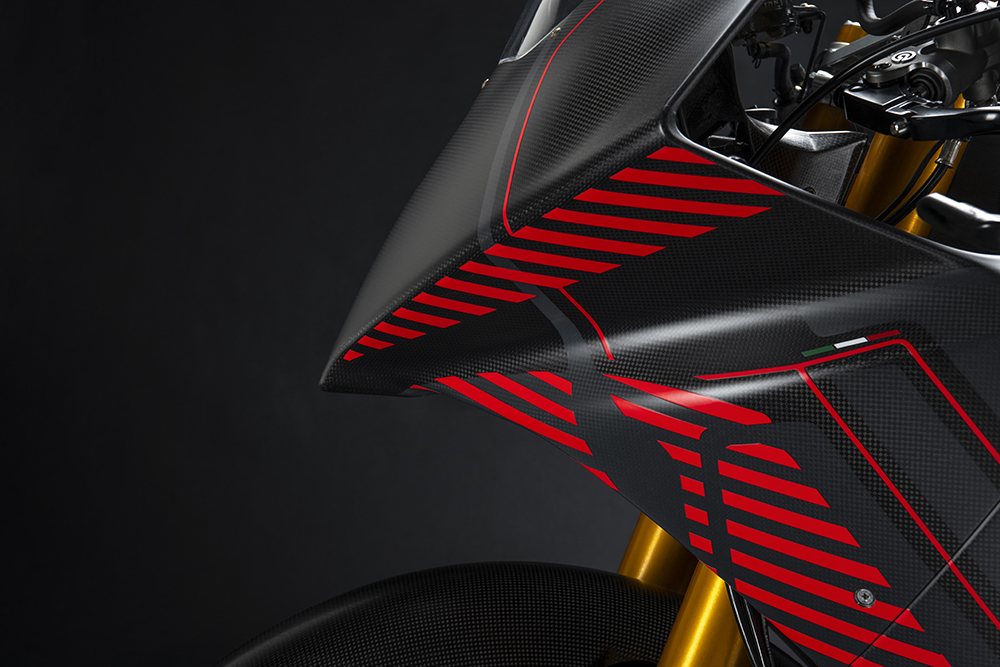 The division of tasks and the continuous dialogue between the people who make up the team were fundamental throughout the process. Ducati R&D took care of all the Project Management activities, together with the design and simulations of the electric powertrain, while the design of the MotoE was taken care of by Centro Stile Ducati who also created the livery of the bike. Ducati Corse, on the other hand, worked on the design of the electronic parts, on the software controls and strategies, on the simulations of the dynamics and aerodynamics of the motorcycle and finally on the bike assembly, testing and data acquisition processes. 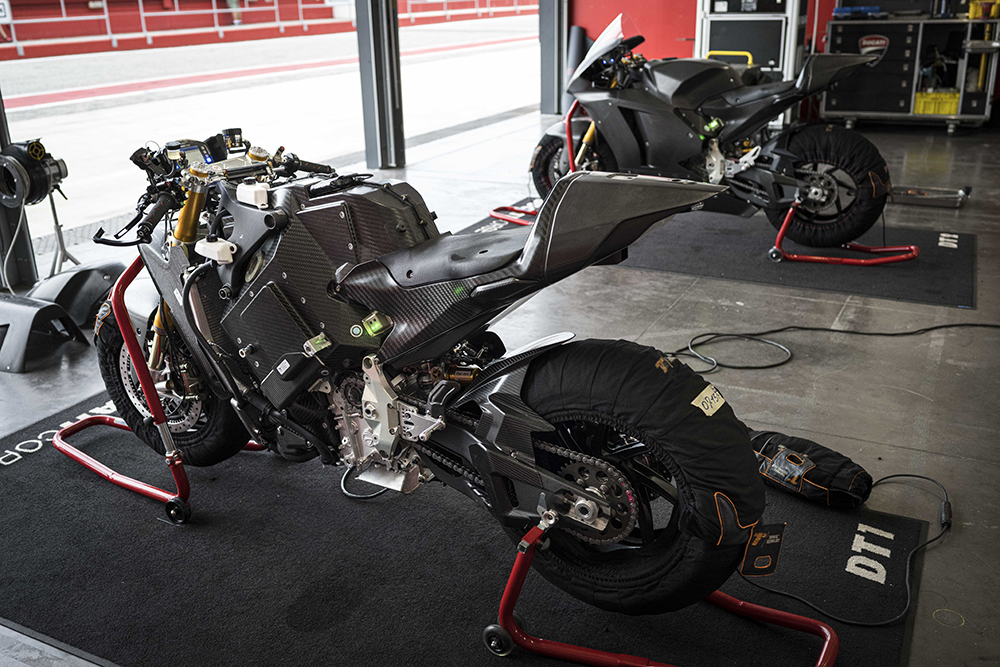 The Ducati MotoE has a total weight of 225 kg (12 kg less than the minimum requirements imposed by Dorna and FIM for a bike capable of completing the race distance) and can count on maximum power and torque figures of 110 kW (150 hp) and 140 Nm respectively, which allowed it to reach a speed of 275 km/h on a circuit like Mugello (Italy). 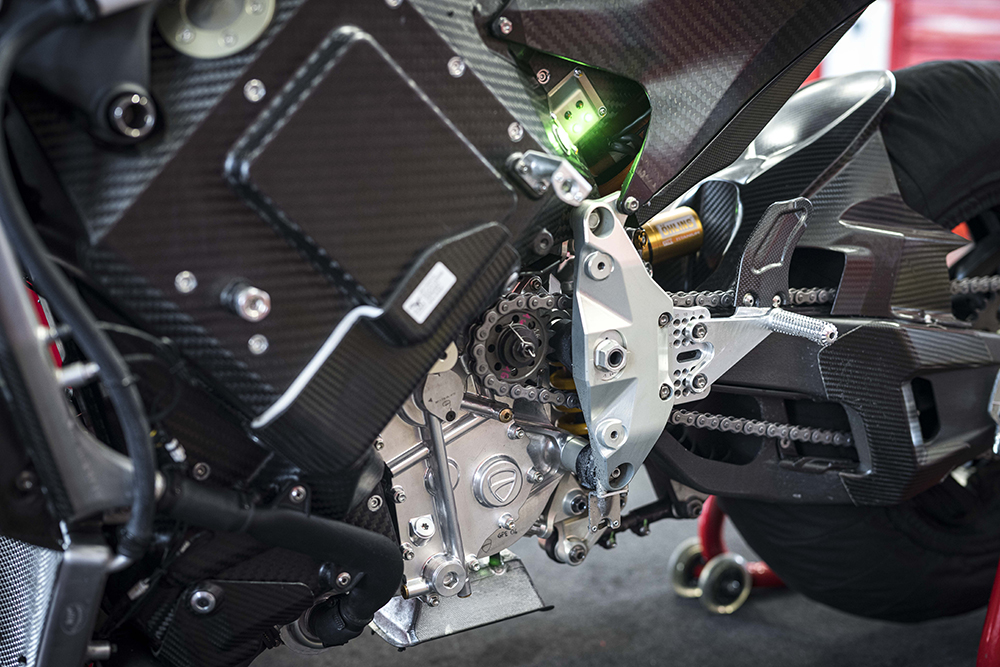 Vincenzo De Silvio, Ducati R&D Director: “For Ducati, having the opportunity to become suppliers of the FIM MotoE™ World Cup is not only a technologically exciting venture, but also the best way to interpret the challenges of the new millennium. Racing competition represents the ideal terrain on which to develop innovative technologies that will then transfer to production motorcycles. At this moment, the most important challenges in this field remain those related to the size, weight, autonomy of the batteries and the availability of the charging networks. Ducati’s experience in the FIM MotoE™ World Cup will be a fundamental support for product R&D, together with the physiological evolution of technology and chemistry. Helping the company’s internal expertise to grow is already essential today to be ready when the time comes to put the first street electric Ducati into production.” 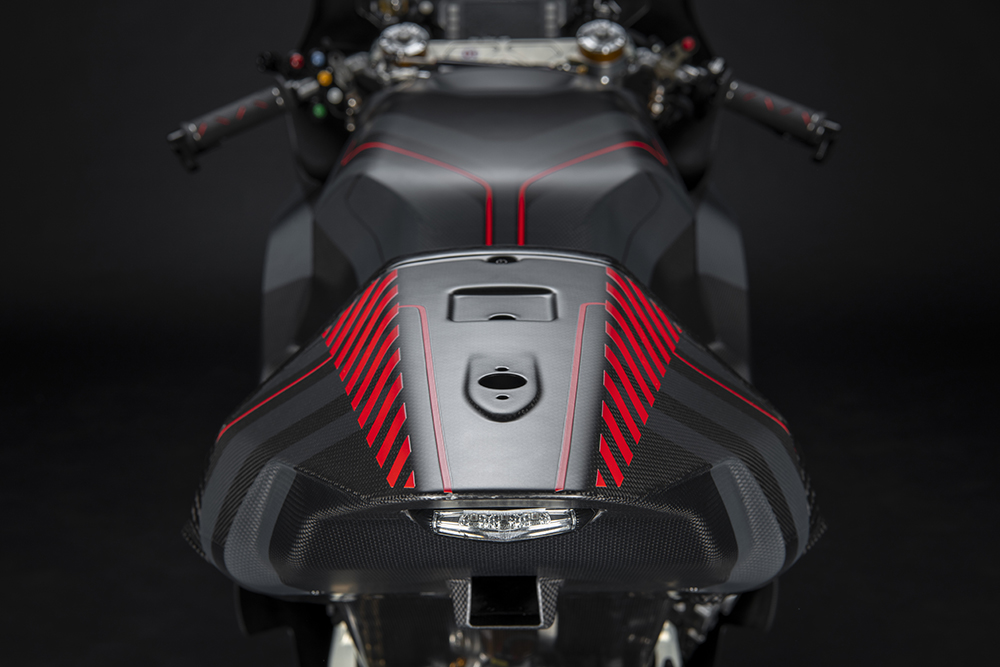 The battery pack is the most binding and characterizing element in terms of masses and dimensions, which on the Ducati MotoE is characterized by a shape specifically designed to follow the natural course of the middle area of ​​the bike. The battery pack weighs 110 kg and offers a capacity of 18 kWh with a 20-kW charging socket integrated into the tail. Inside there are 1,152 cylindrical cells of the “21700” type. 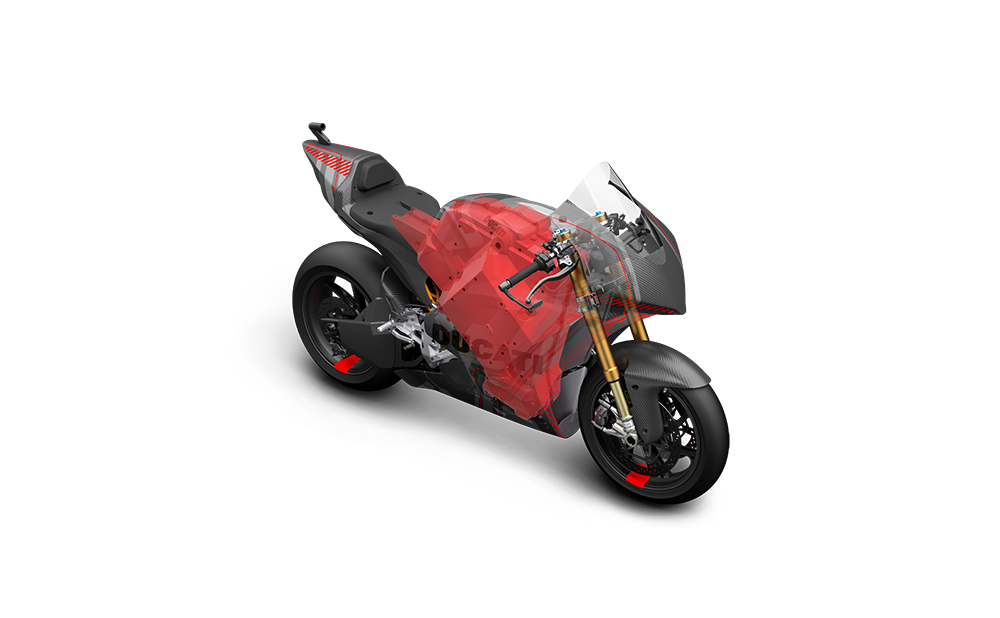 The inverter, with a low weight of 5 kg, is a unit derived from a high-performance model used in motor racing for electric vehicles, while the motor (21 kg weight and a maximum rotation speed of 18,000 rpm) was developed by a partner following the technical specifications provided by Ducati. The entire system is based on a voltage of 800V (with a fully charged battery pack) to maximize the output of the electric powertrain and, as a consequence, performance and range. 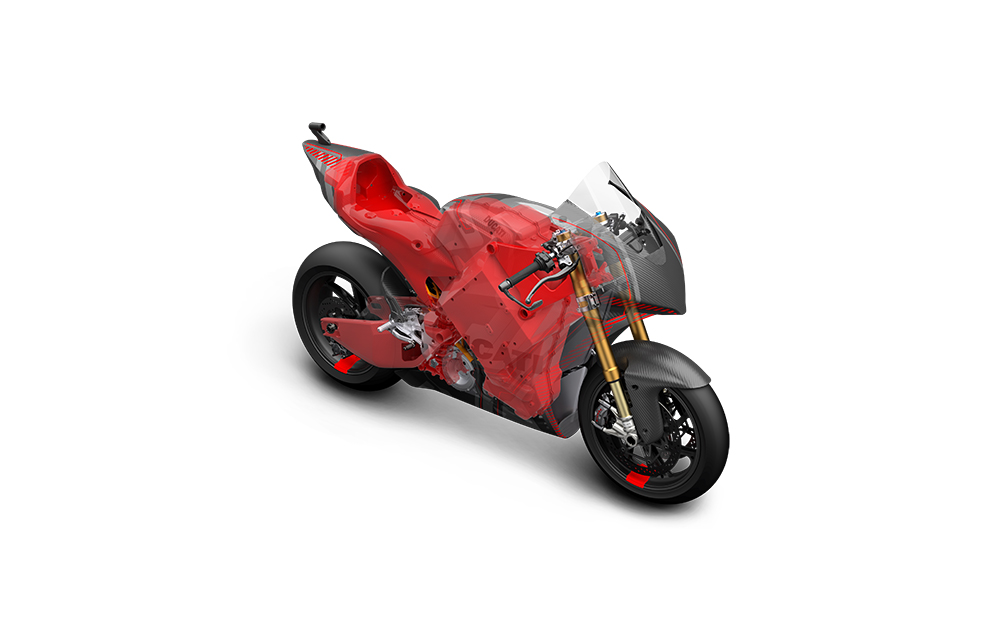 One of the most advanced technical solutions tested on the Ducati MotoE concerns the cooling system. The prototype components are in fact cooled by a particularly sophisticated and efficient liquid system with a double circuit designed to meet the different thermal needs of the battery pack and the motor/inverter unit. This guarantees extreme regularity of temperatures with important benefits in terms of consistency of performance but also in charging times. In fact, it is not necessary to wait for the battery pack to cool to start the process: the Ducati MotoE can be charged as soon as it enters the garage, and it takes about 45 minutes to recharge it up to 80% of its range. 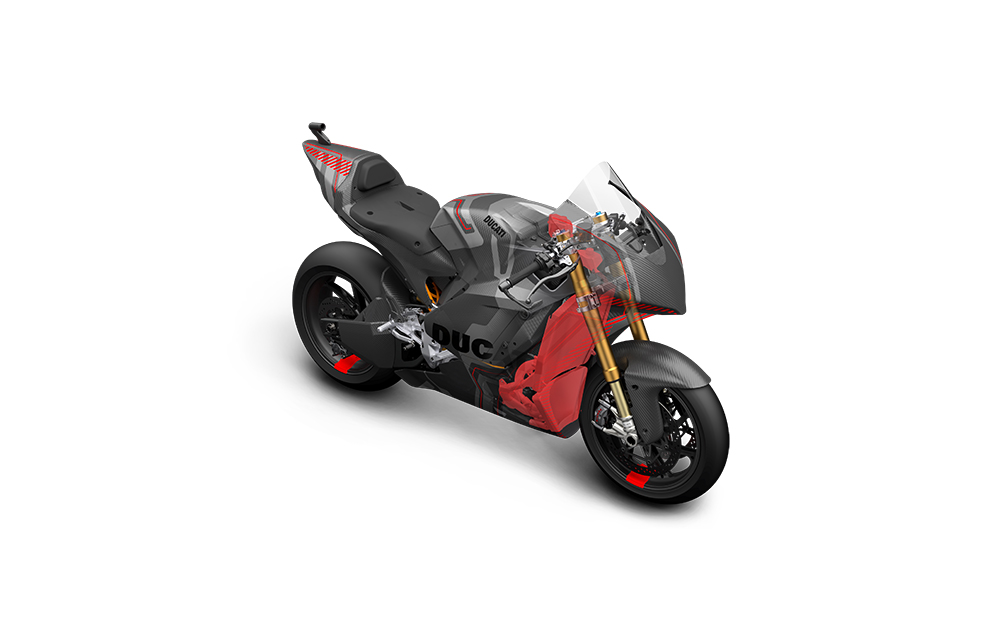 The carbon fibre case of the battery pack also acts as a stressed part of the chassis, like what happens for the Ducati Panigale V4 engine, with an aluminium monocoque Front Frame for the front area weighing 3.7 kg. The rear is composed of an aluminium swingarm weighing 4.8 kg with a geometry like that of the Ducati Desmosedici racing in MotoGP. The rear subframe, which integrates the tail and the rider seat, is made of carbon fibre. 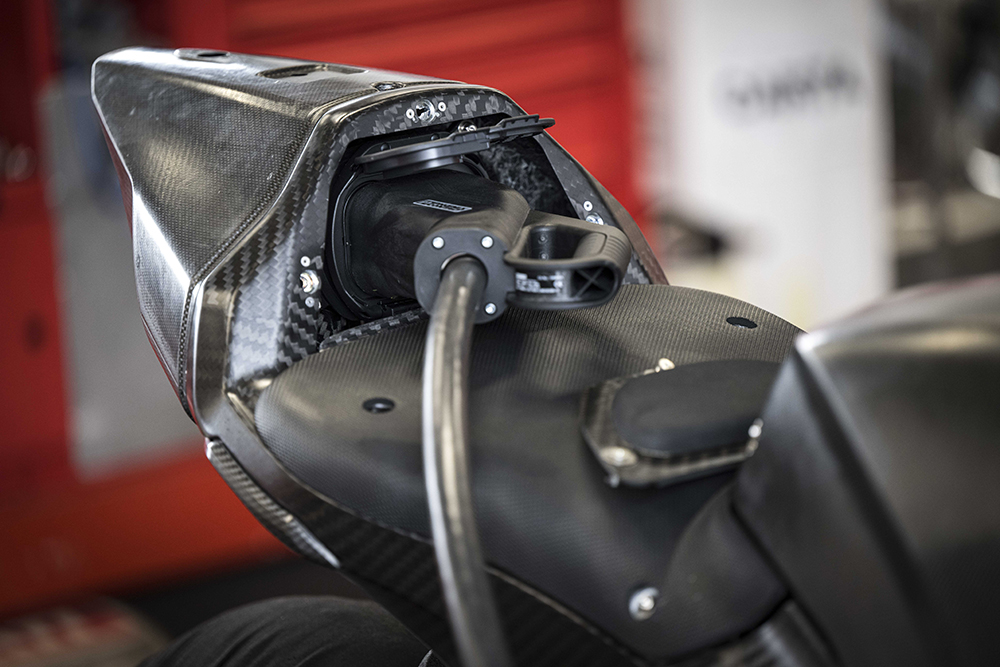 The suspension area features an Öhlins NPX 25/30 pressurized fork with 43 mm diameter upside-down tubes at the front, derived from the Superleggera V4, while an Öhlins TTX36 shock absorber is present at the rear and is fully adjustable. The steering damper is an adjustable Öhlins unit. 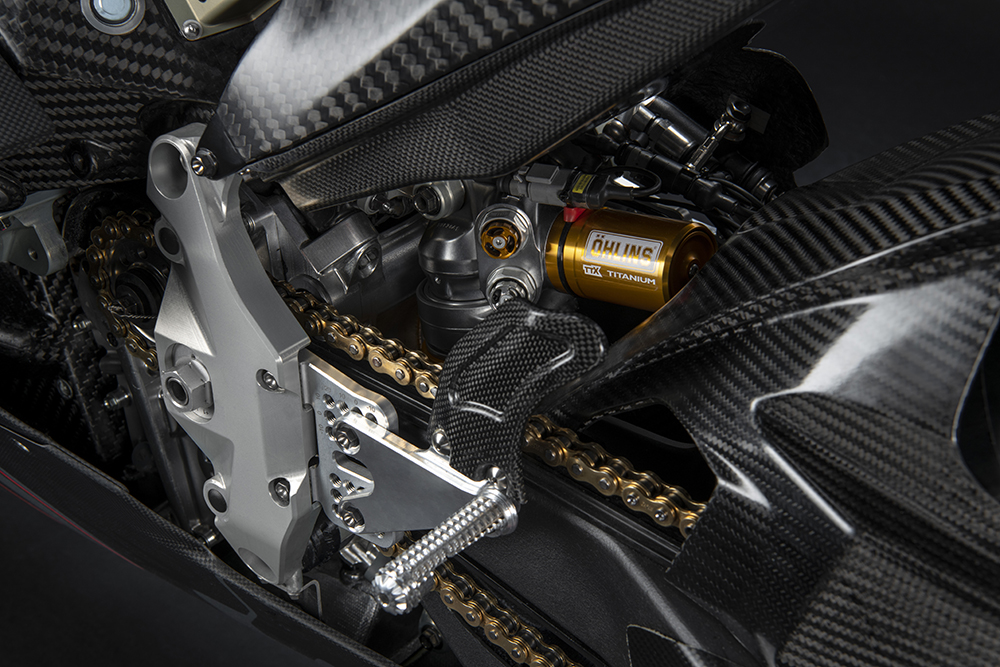 The braking system is supplied by Brembo and is sized for the specific requirements of the Ducati MotoE. On the front, it is composed of a double steel disc with a diameter of 338.5 mm of increased thickness, which has fins on the internal diameter with the aim of increasing the thermal exchange surface area and improving disc cooling. Two GP4RR M4 32/36 calipers with a PR19/18 radial master cylinder operate on this double disc. At the rear, the P34 caliper acts on a single disc unit 220 mm in diameter and 5 mm thick with a PS13 master cylinder. Teams can also choose to equip their bikes with an optional rear brake control positioned on the left handlebar, which the rider can use as an alternative to the pedal one. 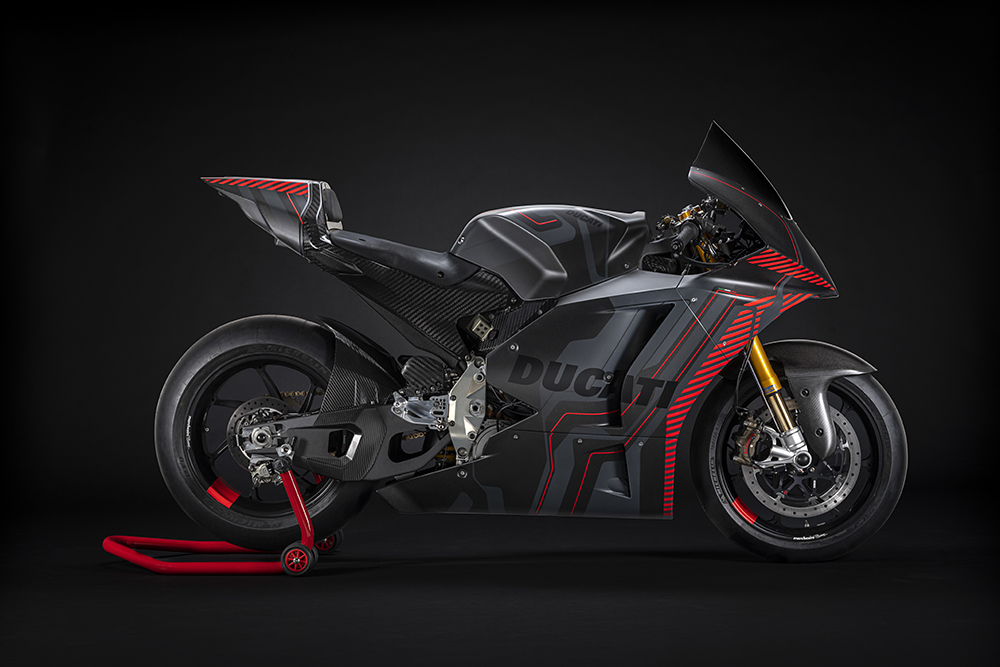 Roberto Canè, Ducati eMobility Director: “I remember the birth of the MotoE project and every phase of the composition of the work team well, with the involvement of Ducati Corse colleagues and the search for contacts within the Volkswagen Group who could give us suggestions on how to develop this project. To make this bike we followed the same procedure that we usually follow on a production bike. We started by defining the design of the bike and in parallel the technical office began to design the various vehicle components. The initial brief was to create a racing bike that respected the minimum performance characteristics required by Dorna. As a matter of fact, this project has made and is making the whole team involved fall in love and is pushing us to create a bike with better characteristics than initially requested by the organizer.” 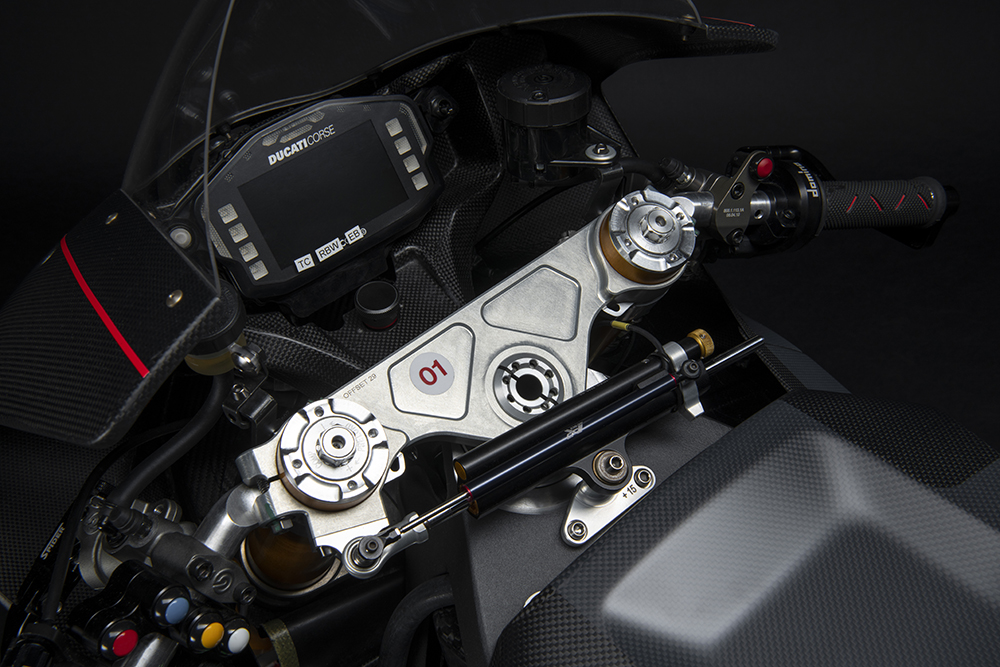 The development process of the Ducati MotoE also involved the Ducati Corse test team led by Marco Palmerini, who worked on the track applying the same methodologies used in MotoGP, with the support of riders Michele Pirro, Alex De Angelis and Chaz Davies. Through the work on the electronics, the aim was to obtain a throttle response like that of an endothermic unit and a response from the electronic controls (such as Ducati Traction Control, Ducati Slide Control, Ducati Wheelie Control and throttle/engine brake maps) indistinguishable from that of the racing bikes that Ducati riders are used to. 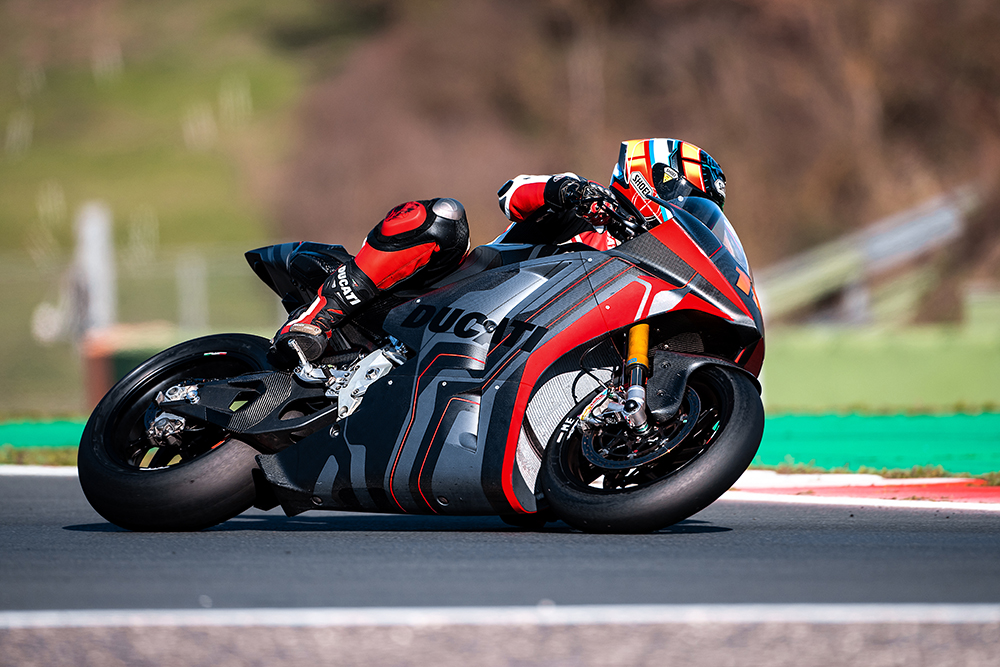