What with all today’s bike companies throwing custom mods and aftermarket accessories at buyers, it’s easy to forget that just a few years ago they were about as welcoming of modifications as Mike Baird is of a late night bevvy. But how things have changed! It seems that pretty much everywhere you look these days, manufacturers are falling over themselves to have their bikes customised by hot shops or to sell you trick bolt-on bits.

BMW has the RnineT. Ducati has the Scrambler. And now Yamaha has the MT and XSR range. And while some of you may point out that manufacturers have always been keen to sell you aftermarket accessories, what’s on offer these days beats anything that’s been available before. And then some.

Need proof? How’s a fully customised bike right off the showroom floor, including bespoke paint, shocks, rubber, exhaust, mirrors and a bunch of other goodies sound? And what if they could finance and warranty it all, too? Well this is exactly what’s on offer from some factory dealers these days. And to prove a point, the team at Sydney’s Trooper Lu’s Garage has taken it upon themselves to run a bike through the process to show us just what’s possible.

You could say the finished product is a real ‘Marvel’. “For the bike’s look, I’ve got my son to thank,” says Trooper Lu’s Justin Chisholm. “He loves ‘The Captain’ and I love trackers. So I thought we should build a Captain America flat-track bike. Then I saw a Shark Helmet design that really crystallised the look for me. The rest was easy.”

Launched in 2013, Yamaha’s three cylinder, 850cc, 115hp MT-09 has been designed from the ground up as a custom-friendly bike, so Justin’s choice to go with one was a no-brainer. Like its brethren from other makers, the bike has been designed with its parts-swapping abilities built in.

“I wanted to base it on the MT-09 platform, as it just ticks so many boxes. And look at the bikes that are already out: there’s the Tracer and the XSR900, too. It’s clear that the platform can do plenty of cool things.” And like Captain America, the MT is easy to get on with, but is also a force to be reckoned with when it’s go time.

Justin points out Dave McKenna’s turbo MT-09 as an example of the platform’s strength, too. “He doesn’t hold back, and the bike’s making some serious power. Still, it’s never missed a beat,” he says. What has it got?

Justin’s first stop on his custom bike journey was the shocks. A Mupo unit with a remote preload and full adjustability was added out the back. Likewise, a Mupo fork cartridge replacement was slipped in up front. Keeping them both road-side down are brand new Pirelli MT60 tyres, with a carbon guard over the pointy end.

Next up was a very nice (and very high) Akrapovič pipe, which we are happy to report sounded amazing on the track. Updates to the bike’s command centre include Pazzo levers, CRG mirrors, and Rizoma Lux grips, indicators and fluid reservoirs. There’s also some Cycra handguards, too. But the big changes here are the crossbar tie for that all-important dirtbike look, and the GPR radial steering damper.

Those that are keen of eye will also notice the Sato frame sliders. Keeping them company is a custom seat by CCU Upholstery, who Justin uses for all Trooper Lu’s work. And of course, there’s the custom paint. ‘We only work with Collide-a-Scope in Hornsby. They are the best in Sydney,’ he says. Dampens the steering, but not the slides Clearly, the best bit about customising bikes is the fact that the sky’s the limit. Want pink sequins on the tank? Done. Fancy six foot pipes out the back? Easy. But it’s when you have to limit yourself with a build by setting some boundaries that things can get really interesting.

“The hard part for this build was making sure that the items or mods were accessible for the customers,” notes Justin. “For example, I wanted to modify the rear subframe to change up the look. I was also thinking about some custom scoops around the lower tank area. But the issue is, that would defeat the bike’s overall ‘off the shelf’ purpose. The whole idea is for it to be here in the shop so people can look, touch and feel the options available – it lets them decide what they might like for their own bikes.” 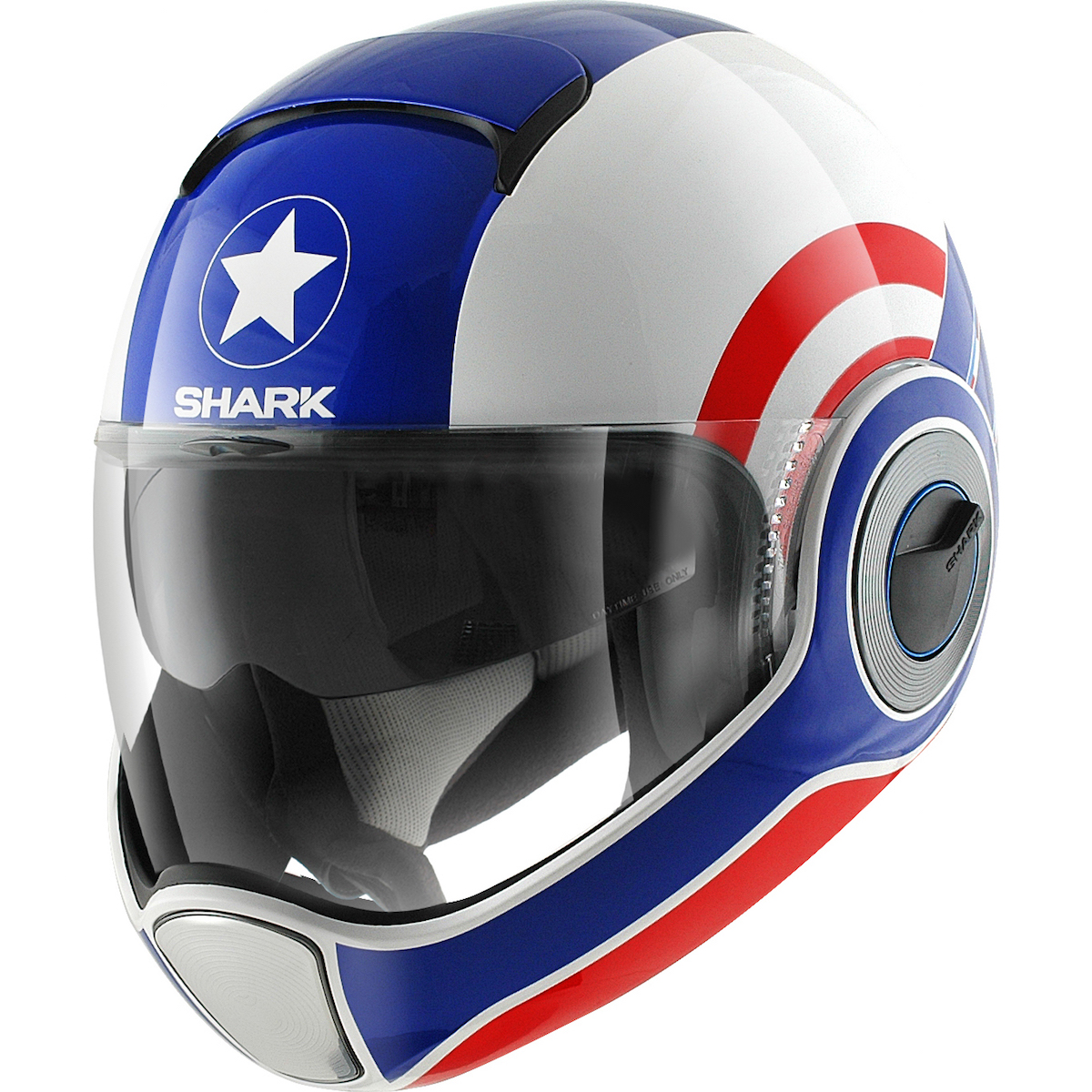 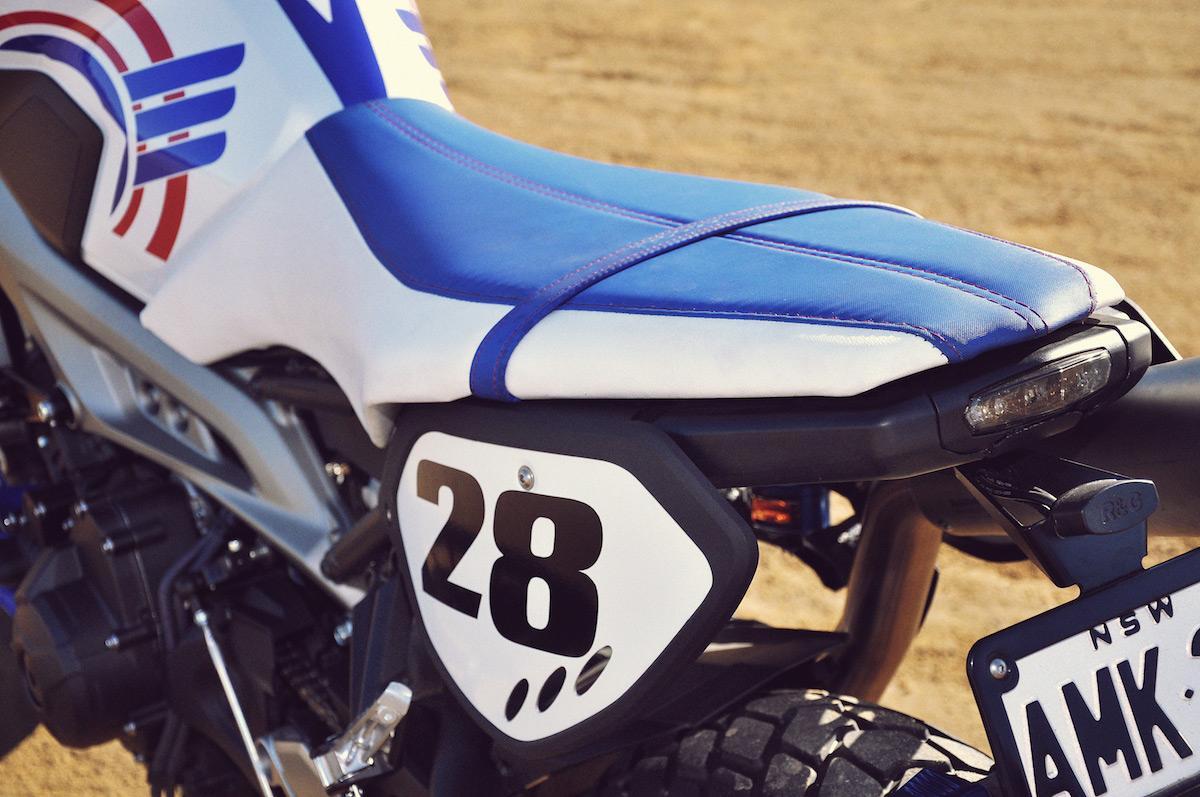 Justin says that he’s in the planning stages for a new XSR700 build. With a full fairing on order, it’s looking like it will be a tribute to some of the classic Yamaha racers of old. “I want to go wild on this one and show everyone what we can really do. We want to prove we can do more. We are lucky though, as we get a lot of support from the motorcycling community no matter what we build. And in the end, that is what’s really important to us.” Couldn’t have said it better ourselves, Justin.