CASEY STONER: “MAYBE I WAS STUPID TO TURN THE LAST MOTOGP OFFER DOWN” | MotoGP

Ten years after winning his second MotoGP world title, Casey Stoner tells us why he retired at his peak and how he’s now dealing with chronic fatigue syndrome

Casey Stoner is one of the greatest motorcycle racers of all time and the only rider to have won a MotoGP crown on Ducati’s Desmosedici, the bike that has befuddled many a world champion.

Indeed the notoriously tricky Desmosedici MotoGP machine wasn’t an easy ride, even for Stoner. At the end of his rookie MotoGP season in 2006 the 21-year-old climbed off his LCR Honda RC211V and onto the big red Duke.

“My first thoughts were, what have I’ve done?!” he recalls. “I thought I’d sent my career down a spiral by going with Ducati. But we never let that defeat us – let’s go to work with whatever we have.”

And that’s exactly what he did, winning more than half the races on his way to the 2007 MotoGP title. Of course it helped that Stoner was one of the most naturally talented riders ever to grace a grand prix grid, which is why he was the only Ducati rider to win a dry-weather MotoGP race in almost a decade. 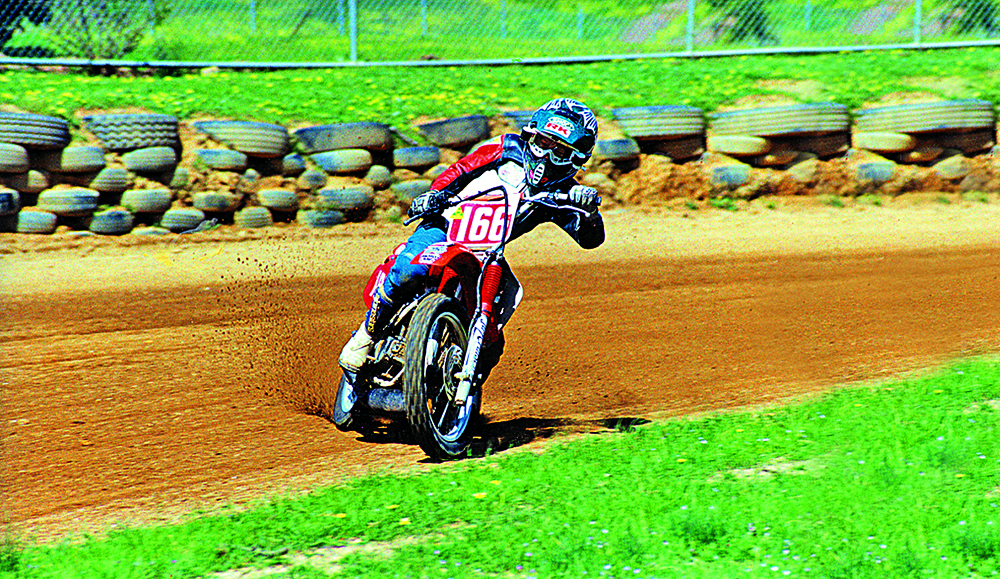 As a youngster, Stoner learned to ride different bikes, in different classes, on the same day

Even now it’s a mystery to many how Stoner could win so many races on a bike that battered and bewildered riders of the calibre of Valentino Rossi, Nicky Hayden and Marco Melandri. Rossi had an agonising two years on the Desmosedici, during which he had a phrase to describe that bowel-loosening moment when he knew the bike was going to spit him off: “We call it the f***ing black hole!”.

How did Stoner ride through that f***ing black hole to win 23 races on the bike? His raw talent, obviously, which he developed doing dirt-track racing from the age of four. Dirt track teaches so much because grip changes all the time. Stoner therefore learned to adapt, not just from one bike to another or from one track to another but from one corner to another.

His skills were stratospheric. Stoner was probably the first rider to overlay the front brake and throttle, using both at the same time in corners to increase front grip and turn the bike.

Most of all he always listened to the motorcycle and did what it wanted him to do. 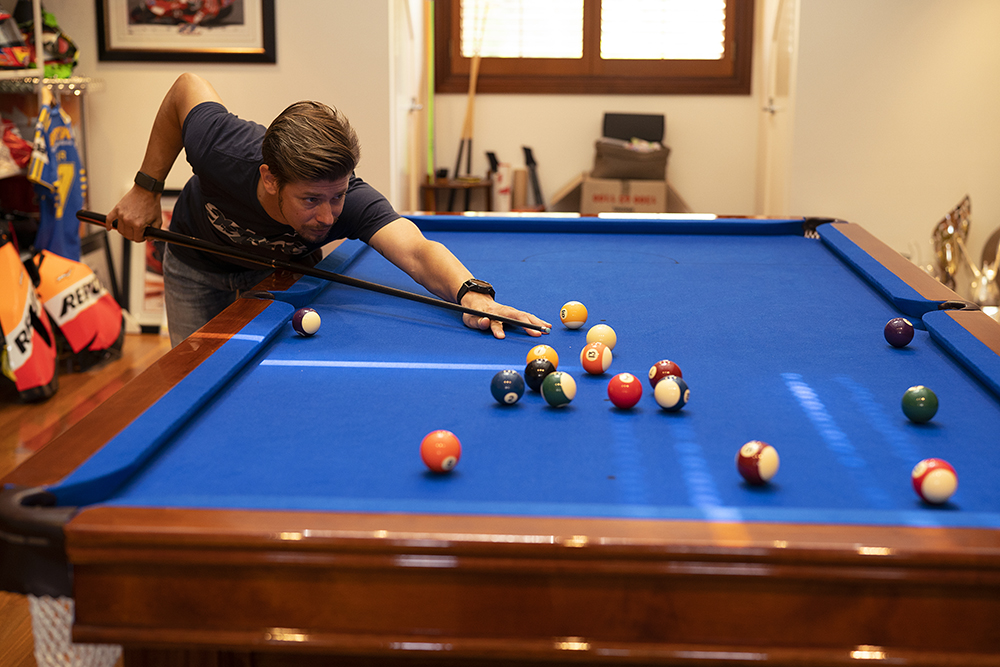 Stoner at home in Queensland. And his six Australian GP winner’s trophies went straight to the pool room!

“I didn’t have one style. I was more adaptable than most – that’s why conditions didn’t matter and circuits didn’t matter. During practice I’d always try to get the bike doing exactly what I wanted, but when it came to crunch time I adapted to what I had and made the difference myself.

“I think a lot of riders fit their one style and they want to do the same thing each week, but each track is different, each corner is different, so you need to react differently.”

Stoner stayed with Ducati for four seasons. He fell out of love with the Italian marque when he was struck low by a mysterious illness and went home to Australia to get better, missing three races. Motorcycle racing is full of so-called heroics – rider breaks bone, has it plated, races two days later – so Ducati management had little sympathy for him. 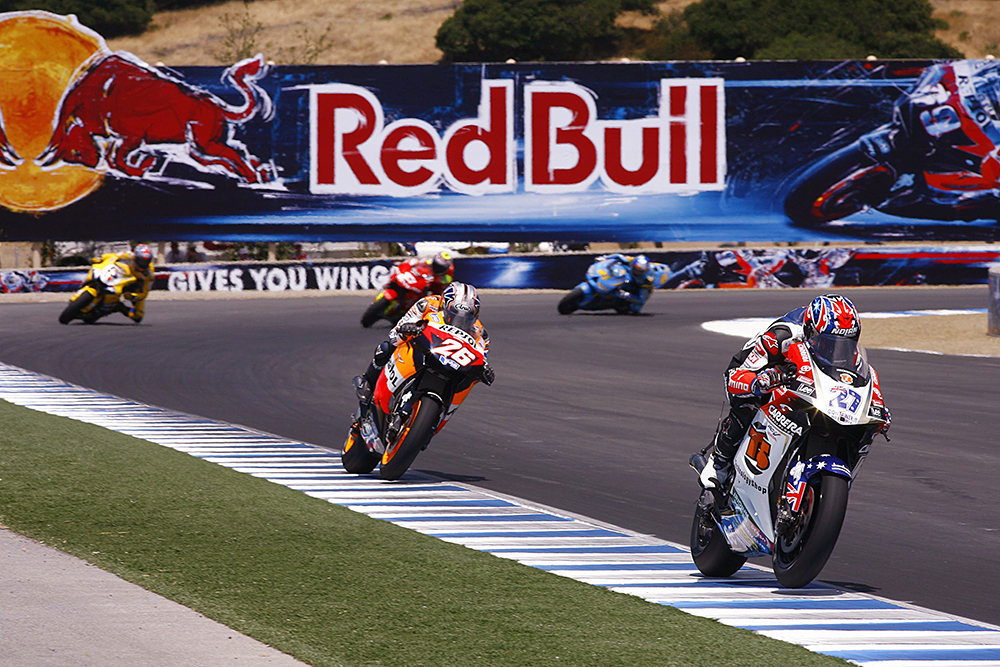 Stoner was an immediate sensation in MotoGP in 2006. Here at Laguna Seca he leads Dani Pedrosa, Colin Edwards and Toni Elias

In fact Stoner was very ill. After numerous tests he was diagnosed with lactose intolerance. Only later was it discovered that he probably had Epstein-Barr Virus, which may have triggered the chronic fatigue syndrome that plagues him now.

Stoner didn’t appreciate Ducati’s lack of interest in his wellbeing, so when Honda asked him to ride its RC212V in 2011 he jumped at the chance.

“In every possible way the Honda deal was better than Ducati’s so why would I stay with them? I wasn’t getting respect there.”

Keen MotoGP fans will know that Stoner isn’t the only Ducati rider to feel this way – in recent years both Andrea Dovizioso and Jorge Lorenzo quit the factory after falling out with senior management.

Stoner is still angry with Ducati. 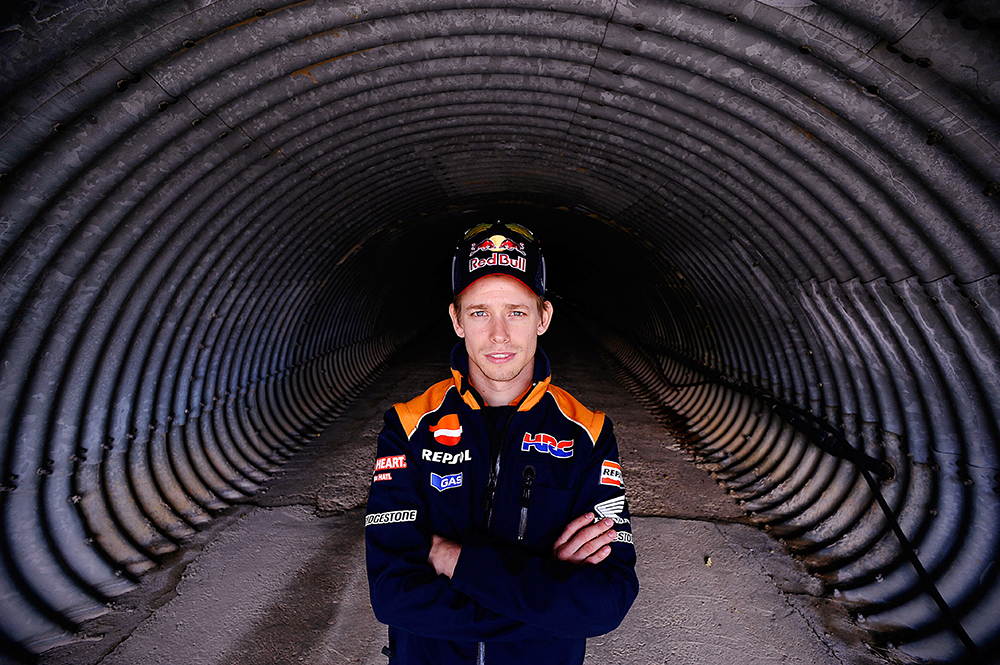 Casey Stoner poses for a portrait at the Moto Grand Prix 2012 at the Circuito de Jerez in Jerez, Spain on April 28th, 2012.

“I think they’re getting worse at looking after their riders,” he adds. “Time and again they’ve shown zero loyalty to riders because they really do believe they’ve got the best bike.”

The Honda move was another immediate success. In 2011 Stoner once again won more than half the races to win his second MotoGP title. Only four other riders have won MotoGP championships with different brands: Rossi, Eddie Lawson, Giacomo Agostini and Geoff Duke. That’s some seriously exalted company.

Stoner made an excellent start to his title defence in 2012, winning two of the first three races to lead the points chase. And then on the eve of the fourth race he dropped the bombshell. During the pre-event press conference at Le Mans the 26-year-old announced he would retire at the end of the season, at the peak of his career. If it hadn’t been for the sound of a hundred journalists’ jaws hitting the floor you could’ve heard a tear-off drop.

His reasons for quitting were various. Most of all he wanted to go home. 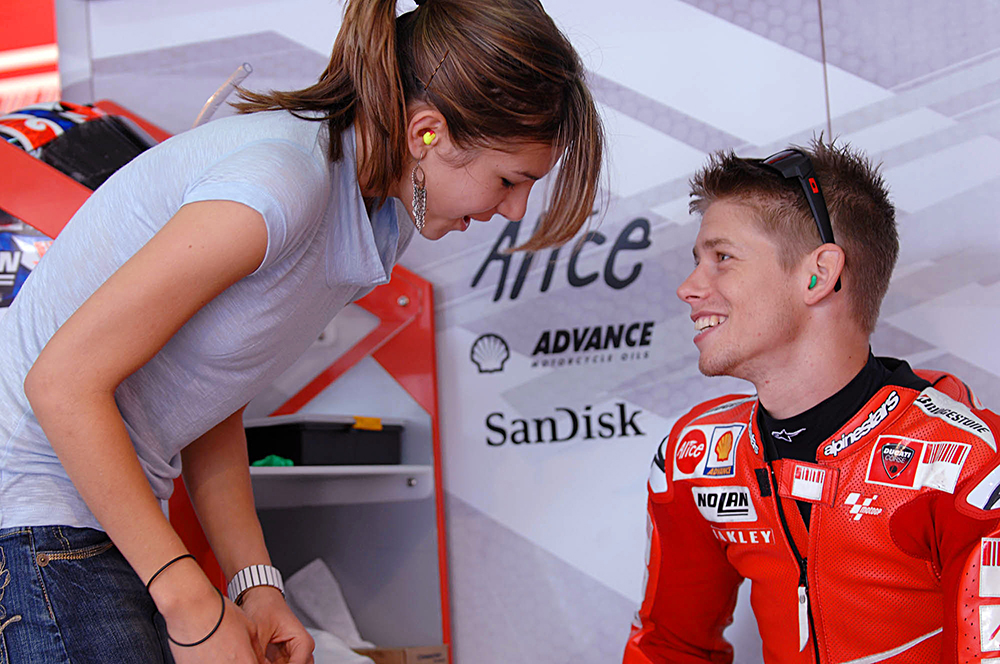 “I like the quiet life,” he said at the time. “What I’m really looking forward to is putting socks in a drawer and getting them out of a drawer in the morning, rather than out of a suitcase. I’ve been living out of a suitcase for 12 years and I’m over it.”

Stoner is now 35, the same age as Cal Crutchlow and Andrea Dovizioso were when they quit MotoGP last year. If he had kept racing till he was their age he’d be something like another $180 million richer now, so does he regret packing it in so early, especially after Honda offered to double his salary for 2013?

During the next seasons following his retirement the media came alive every few months with rumours of a Stoner comeback. 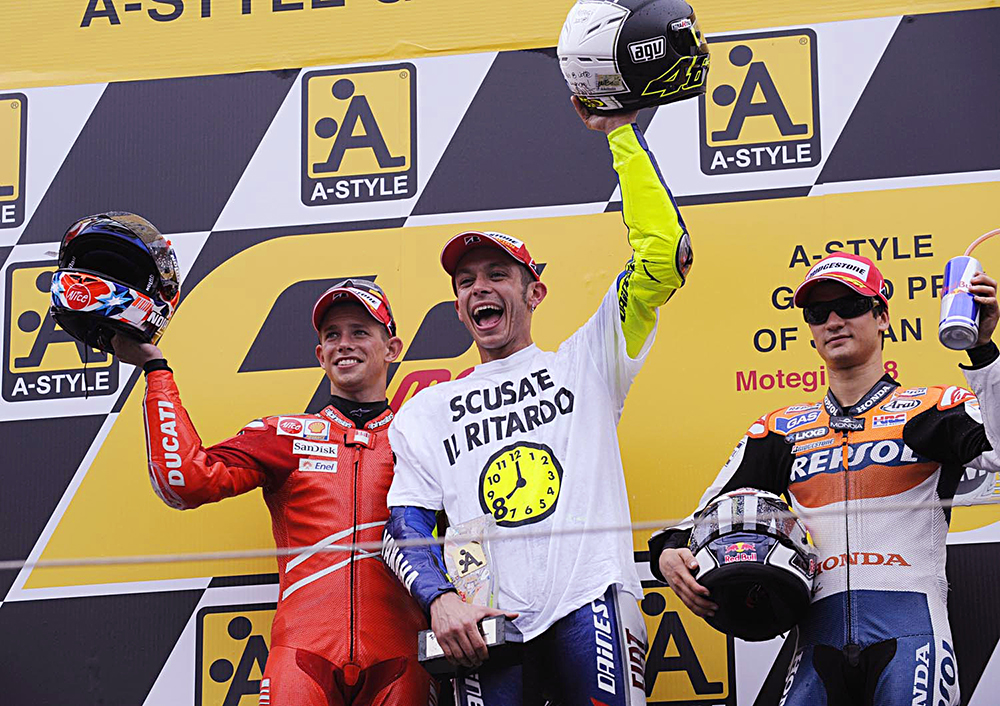 The Aussie was second in Japan, behind Valentino Rossi, in 2008

But there was no comeback. Stoner wasn’t only homesick, he had fallen out of love with MotoGP, because he hated what was happening to the paddock and the bikes.

At the end of 2011 MotoGP banned Moto2 and Moto3 riders from using campervans in the paddock, to make room for more corporate hospitality units. Overnight the paddock was transformed, from a bustling global village to glitzy marketing mall.

At the same time MotoGP technical regulations were rewritten to allow motorcycles powered by superbike engines onto the grid. 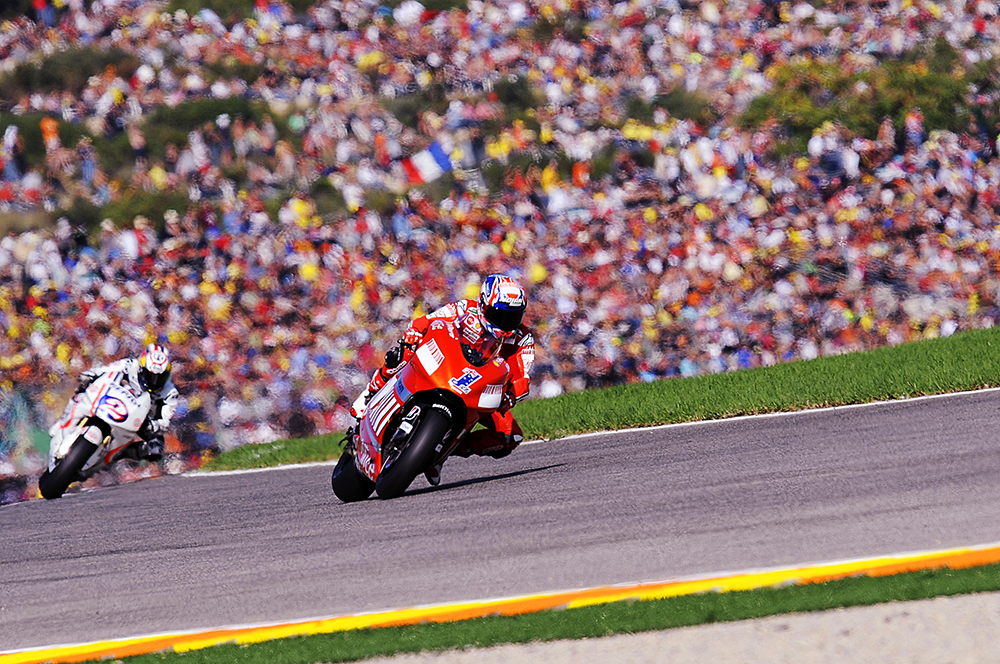 Stoner ended that year with a win in Valencia, ahead of Pedrosa (#2)

“I still don’t like the direction MotoGP has taken,” he adds. “I’d like to see the purity come back, rather than the electronics controlling the bikes on the gas and the winglets controlling the front end. All the bikes are basically clones of each other, which is why they run so close together.”

He has a particular distaste for Ducati’s current Desmosedici, with its huge F1-inspired aerodynamic wings.

“It’s a monstrosity, that bike. I’d love to get some of the regulations changed to get half the stuff that’s on MotoGP bikes ripped off. MotoGP doesn’t need wings and everything – it seems to be going in the F1 direction.”

Stoner has never been afraid to speak his mind, most famously when Rossi wiped him out at Jerez in 2011. After that race the youngster made his way into Rossi’s garage and told him, “Your ambition outweighed your talent”. Probably the hottest burn in MotoGP history.

The pair didn’t get on because Stoner was the first rider to properly kick Rossi’s arse. They were also opposites: Rossi the crowd-pleasing superstar, Stoner the almost reclusive sportsman who loved racing but hated all the bullshit that goes with it.

“I’m here to race and the rest of it is just murder to me,” he told me years back. “Some people enjoy the media but I hate attention. I’d really prefer to be a little mouse in a corner, forgotten about.”

When Stoner first came to the UK aged 14 he contested the low-budget Aprilia Superteens championship, run by former racer Ian Newton. He won most of his races but had no time for the usual post-chequered flag theatrics. 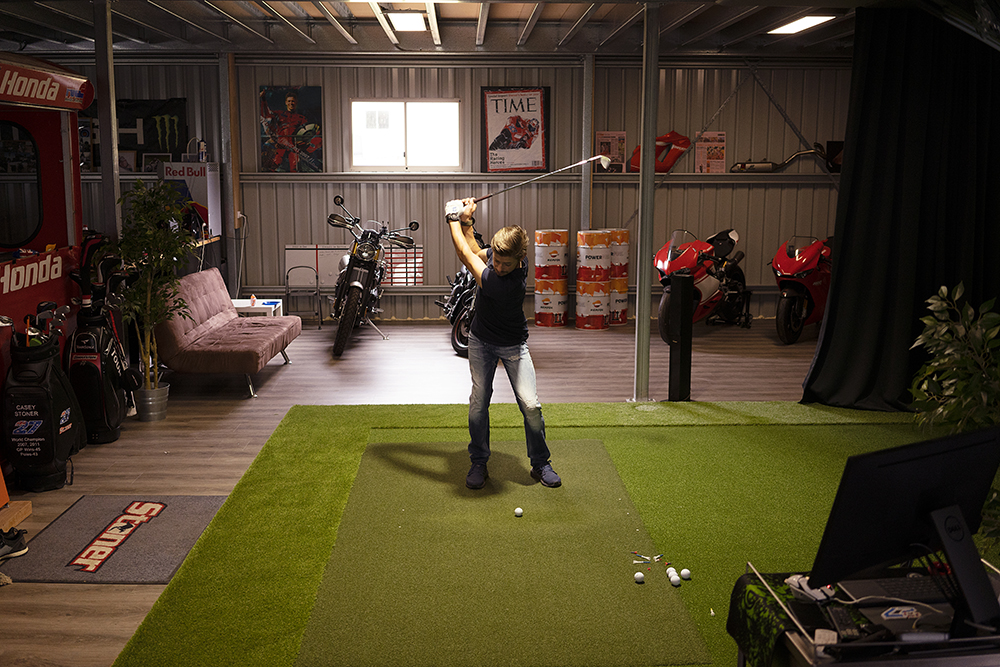 That’s a hell of a man cave

“Casey used to do the slowdown lap with both hands on the handlebars, so I said he should wave to the crowd,” remembers Newton. “He said, ‘No, I’d feel like a real dick!’. So he was riding around, hiding inside his helmet, embarrassed with what he was doing, with how good he was.”

Many fans never understood Stoner’s shyness, which made him unpopular. As did beating Rossi. At Donington in 2007 he destroyed the opposition in treacherously slippery conditions, beating the crowd favourite by 21 seconds. During the slowdown lap he was booed by some so-called fans. One idiot even ran onto the track to give him the wanker sign. That’s another reason he fell out of love with the sport.

Stoner, wife Adriana and their two daughters now live a million miles away from all that. They live an apparently idyllic life on Australia’s Gold Coast, a half-hour drive inland, well away from the glitzy beachfront skyscrapers.

Except Stoner’s life isn’t quite the utopia it should be. Three years ago he was diagnosed with chronic fatigue syndrome (CFS), otherwise known as ME (myalgic encephalomyelitis). 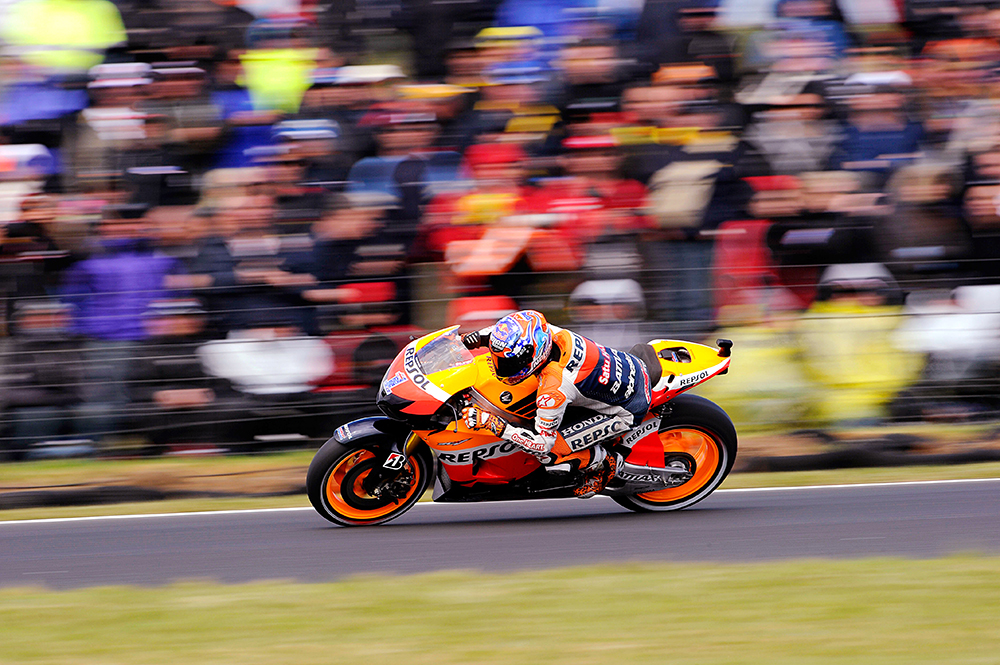 “I raced with Esptein-Barr but chronic fatigue syndrome is a whole other level. It’s been terrible. I didn’t believe it existed. It started after I had my injured shoulder reconstructed in 2018. When I began training after the operation I was collapsing halfway through gym sessions. Eventually I got diagnosed with chronic fatigue syndrome. I spent six months never getting any further than from the bedroom to the couch. That was it, that was my day.”

“For two years I was completely useless, even with my kids. I had no energy to do anything with them; I was just trying to survive. Then I’d have a few good days and think I was coming out of it, so I’d do a few things and then I’d have to spend another few weeks on the couch.

“It took me more than a year to learn that no matter how good I was feeling, don’t do anything. It’s had a big effect on the family. Adriana has had to pick up a lot of work because she has to look after me and the kids, but she’s been fantastic, everyone has.

“The last few months have been the best I’ve had in three and a half years. I’ve felt better and more alert. Even talking to you now, I’m not forgetting words like I normally do. And I’ve learned to accept it – I’m not going through cancer. It’s debilitating, but it’s not the end of the world.” 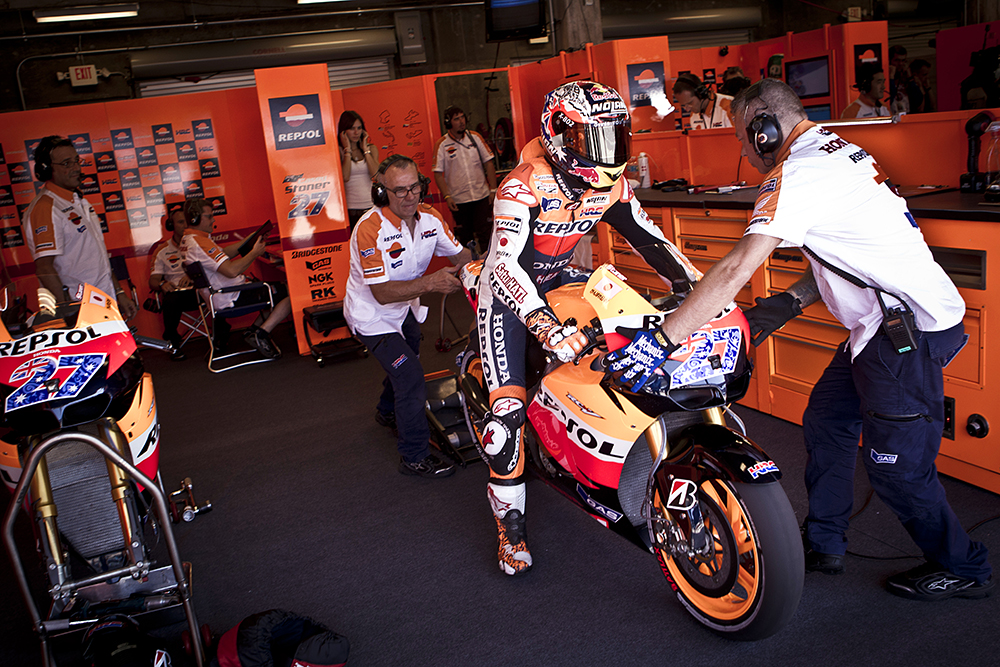 Casey Stoner prepares to ride in the Friday practise session of the Indianapolis Moto GP in Indianapolis, IN, USA, on 26 August 2011

There’s no certain cure for CFS. Stoner may recover or he may not.

Either way it’s not the kind of retirement one of the sport’s greatest exponents deserves.