Brad Binder holds his nerve in flag-to-flag thriller in Austria! 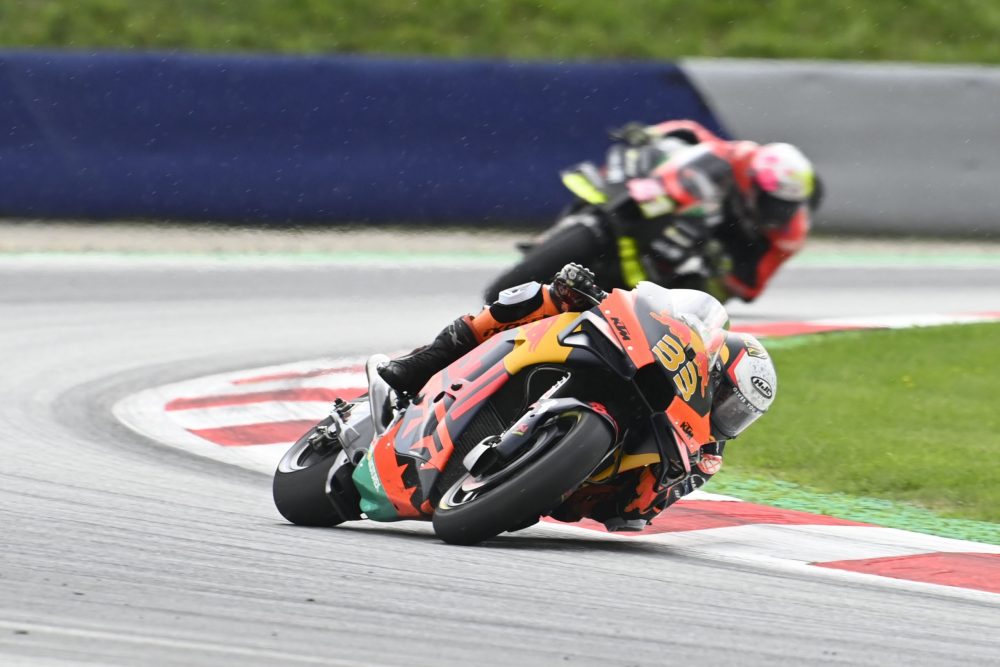 Where to even start with the absurdities of this one? How about Marquez proving to be fallible in a second encounter of this nature in succession? Or that Bagnaia, Martin and Mir, with wet tyres fitted, started the last lap tenth, eleventh and twelfth respectively yet finished second, third and fourth, with the variation in lap times between the winner and runner-up 15s on the final circuit?

Yet nothing defined the madness quite like Binder tip-toing around a fully wet track for the final three laps on slick tyres, scares coming thick and fast. Never mind the fact his rubber was ill-equipped to deal with the amount of water of track; his carbon brakes had cooled to the extent they had essentially stopped working. “No matter how hard I pulled the lever nothing was happening,” he said of a last lap when he twice ran off track. “The only thing working was my rear brake. I pushed it and the thing was sideways, touching the steering lock. This wasn’t racing. This was surviving.” 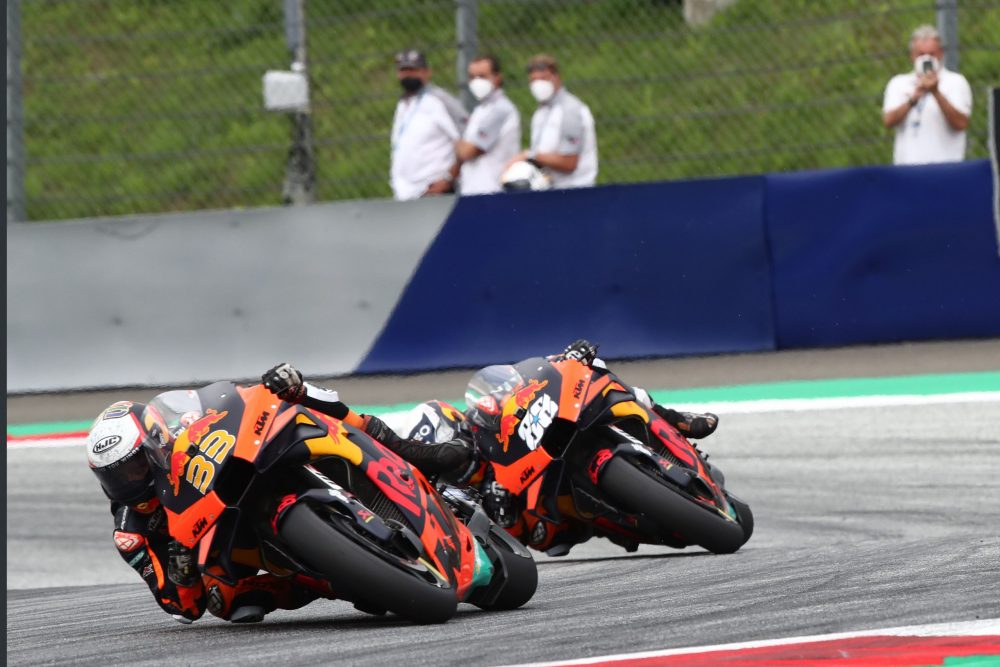 Prior to the rainfall, Binder wasn’t even in podium contention. “I was having a horrendous race,” he admitted of those opening 21 laps, at the end of which he sat sixth, 5.9s back of the victory fight. Yet as those ahead opted for safety, the 26-year old rolled the dice. “With it being our home Grand Prix, I had to take the gamble,” he said. No one could deny he earned it, his skill in those last laps even earning praise from Ducati team boss Davide Tardozzi. “Binder showed two big balls,” said the Italian. “He deserved this win.”

Had the clouds steered clear of the high-speed alpine venue for the second Sunday in succession, this would surely have been a classic finale of a different kind. For 22 laps Bagnaia, Marquez and Quartararo ran together in a thrilling contest up front, with Martin and Mir – the previous weekend’s big winners – unable to keep up. Lightning lit up the surrounding mountains, providing a spectacular that befitting of this thrilling fight as the trio occasionally traded paint at close to 200mph. 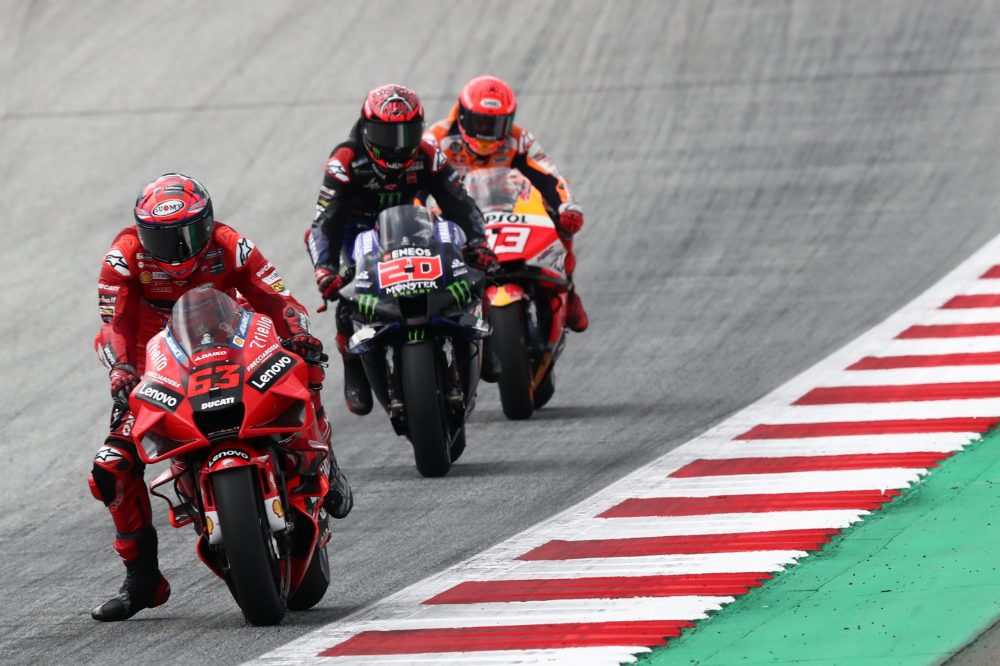 Marquez once again shrugged off pain and discomfort to look the man most likely to spoil Ducati’s domination in Austria. Yet neither he nor Quartararo achieved the results their exerts in the dry had merited. Marquez crashed out on the penultimate lap, having failed to get his wet front tyre up to temperature, while the Frenchman failed to cut through the others who continued on slicks – Aleix Espargaro (Gresini Aprilia), Luca Marini (Sky VR46 Ducati), Iker Lecuona (Tech 3 KTM), and Valentino Rossi (Petronas SRT Yamaha) – at the same speed as the men he battled before the bike swap. Still, Johann Zarco’s (Pramac Ducati) crash out of sixth place further enhanced his claims for the title.

Yet it was Bagnaia who threatened to break his victory duck throughout, leading all but one of the race’s opening 24 laps. He took control on lap one, with Martin – fresh from a second pole in seven days – lucky to avoid contact with Quartararo at turn six, leaving Zarco and Marquez by. 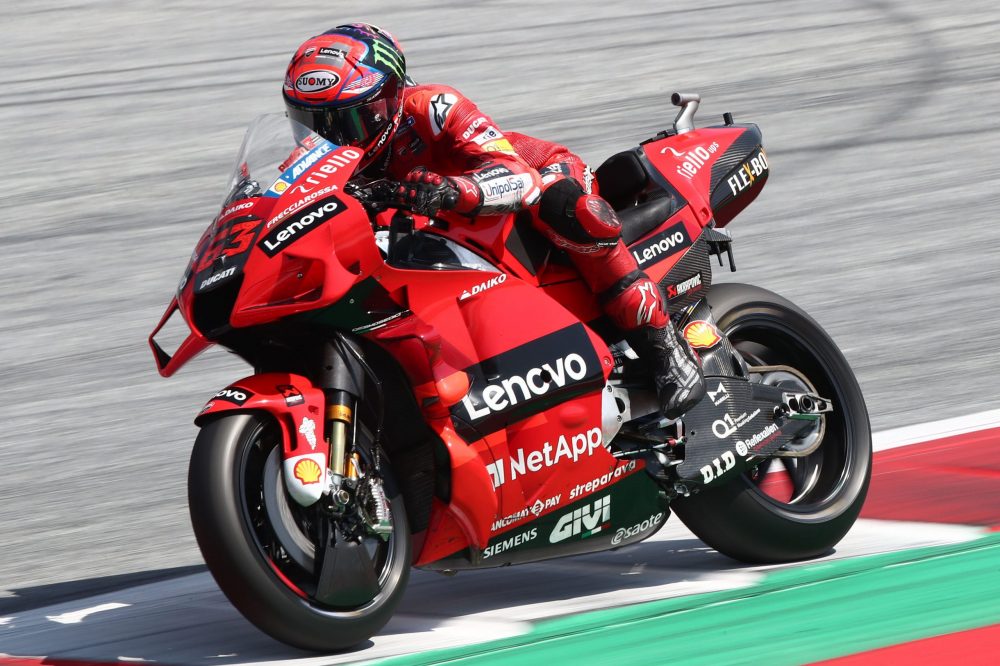 Marquez bared his teeth on lap three, passing both Pramac Ducatis to sit second, while Quartararo disposed of Jack Miller (Lenovo Ducati) then Zarco in quick succession for fourth. Again, on lap six, Marquez and Martin went at it, swapping second place at turns three and four, before Martin’s lunge on Bagnaia at seven pushed him back to third, then fourth as Quartararo pounced at nine. The following lap served up further drama: Marquez was wide at the first turn, leading him, Martin and Quartararo to graze fairings on the run to turn three. The Frenchman blinked last with a daring move around the outside. This was shaping up to be a classic.

Then nature made its first intervention. Rain flags were shown around the track on lap eight, only to be withdrawn three laps on. Around then the slow starting Mir came to life as he dropped Binder then the fading Miller to sit sixth behind the lead group of five. Soon it was Zarco’s turn to fade, dropping back into the Suzuki man’s grips before crashing at turn nine 18 laps in. Mir was now fifth. 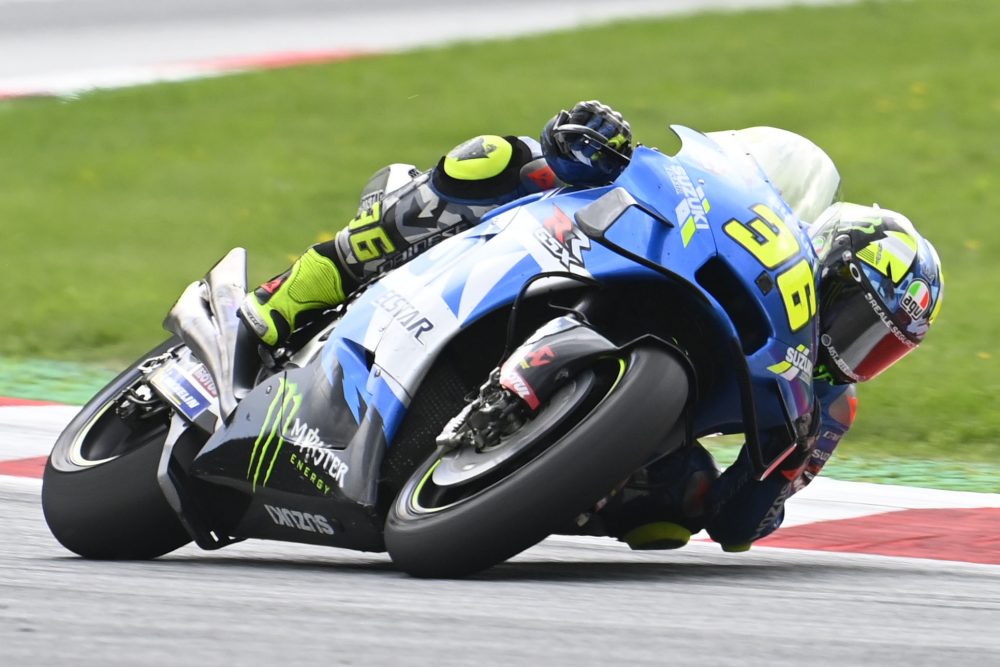 And Martin’s chances of repeating his victory feats from the week before slipped away, with the lead trio of Bagnaia, Quartararo and Marquez ebbing tenths ahead. Now it was time for the Repsol Honda to test his rival’s resolve. On lap 20 Marquez showed Quartararo a front wheel on the exit of turn one, causing the Frenchman to out-brake himself into three. Two laps on, a neat switchback took him by Bagnaia on the exit of turn three only for the Ducati to respond into the following turn.

Then the first signs of madness. The rain flags reappeared six laps from the flag. Miller and Alex Rins (Ecstar Suzuki) were the first to take the plunge, pitting for a bike swap on lap 23. But the track wasn’t wet enough to give them any advantage. By lap 25 it most certainly was. The pace had slowed, bunching Martin, Mir and Binder together with the lead trio. And Marquez led them all into pit lane to switch to a spare bike fitted with wets. All except Binder, of course. “I couldn’t decide do I go or do I not? I just decided at the last moment was I saw the whole group pull in to the pits,” he said. 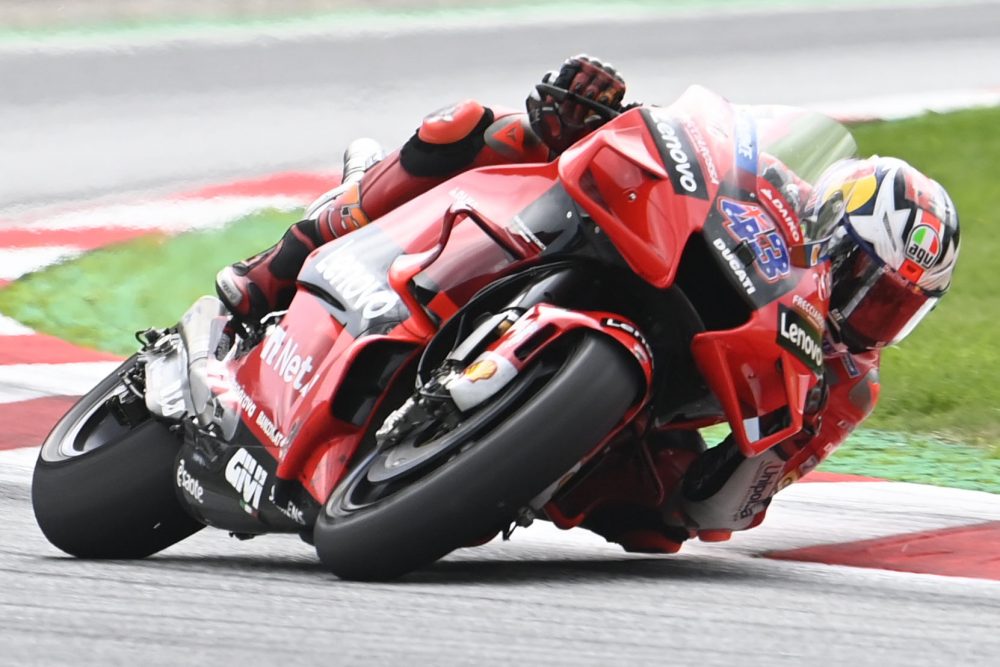 The race was turned on its head. Espargaro stayed out on slicks, as did Rossi, Lecuona and Marini, making the unlikeliest of top fives. And they were so close. Turn one was the scene of Marquez’s unravelling on the penultimate lap. And starting the last, the rain had intensified so as to slow the leaders’ pace to a crawl. That led to the unlikeliest of scenes as Bagnaia, Martin and Mir – their wets now working well – sliced through the top ten with ease, Bagnaia rescuing second ahead of Martin and Mir.

But Binder was the star, winning by 12s. “Sometimes you’ve got to take the gamble, and today it worked,” he said. Bagnaia was in awe of his bravery. “He did something incredible today,” he acknowledged. “I just tried to warm up the tyres, and the last laps I overtook nine riders. I enjoyed it a lot.” Martin was similarly thrilled with his late salvage. “I arrived to the group in corner seven and I passed six, seven riders in two corners. I was super happy with third, even more than last week because I didn’t expect that.” Mir grabbed fourth, with Marini a career best fifth, Lecuona likewise in sixth. Quartararo extended his title advantage with seventh with Rossi a season best eighth. Alex Marquez (LCR Honda) and Espargaro completed the top ten. 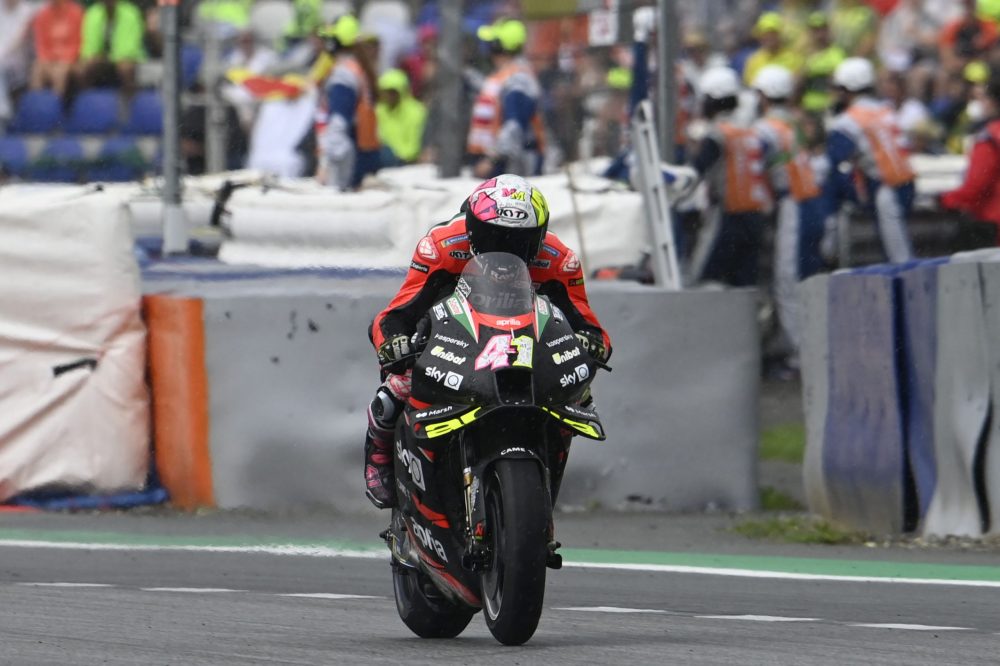 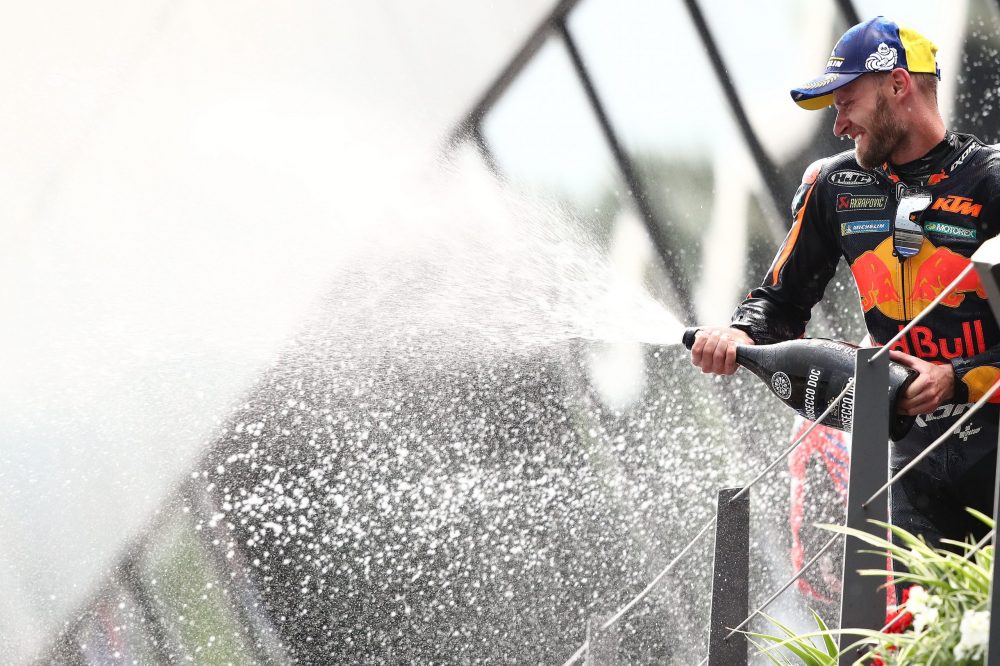